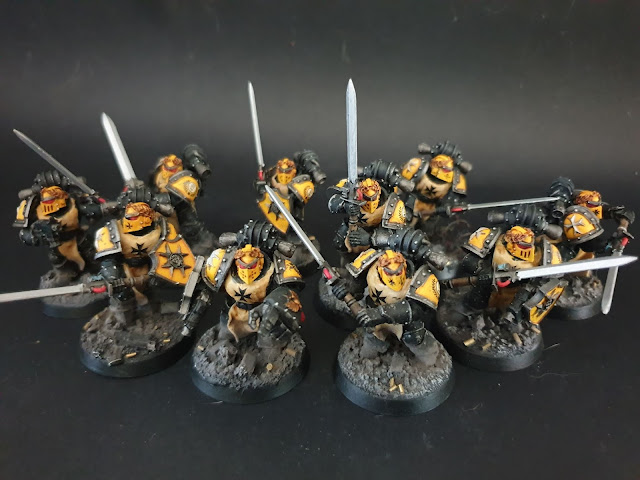 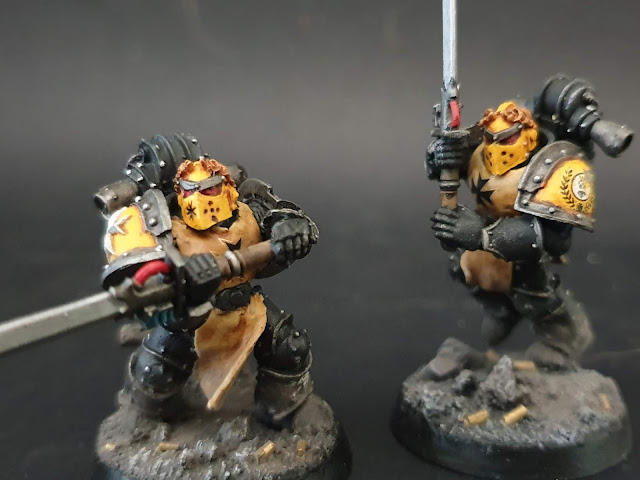 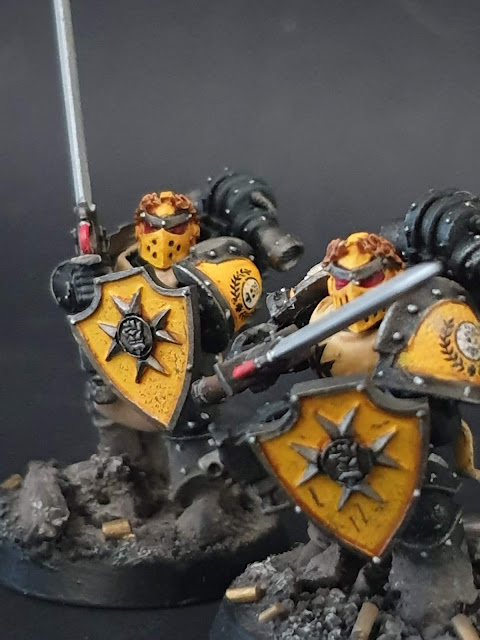 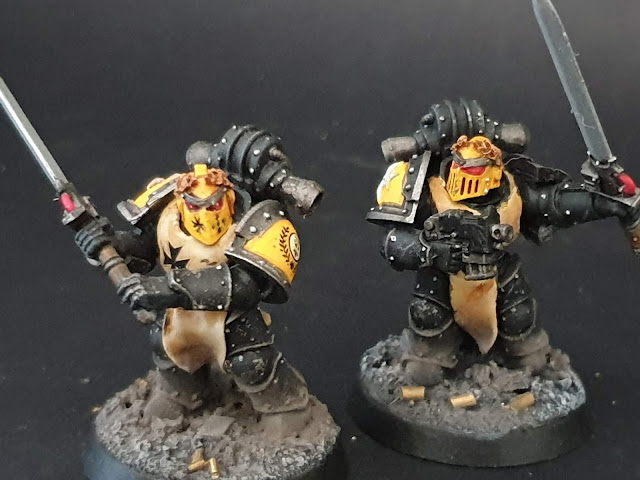 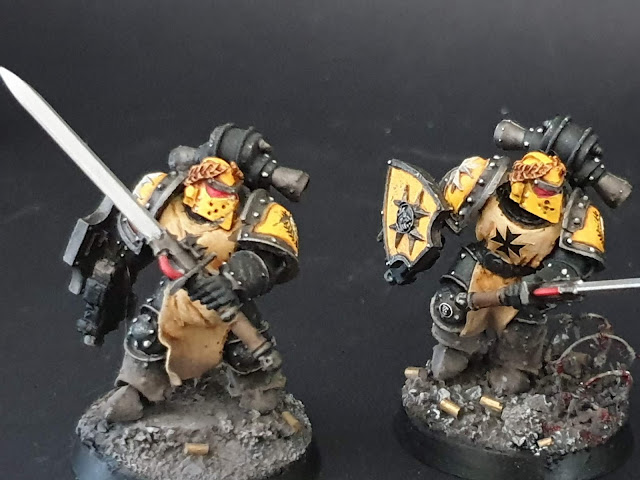 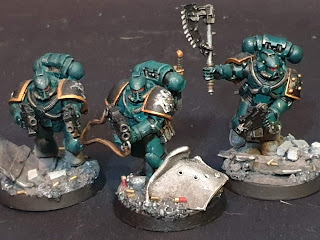 Another Squad finished, this time a Volkite support squad. 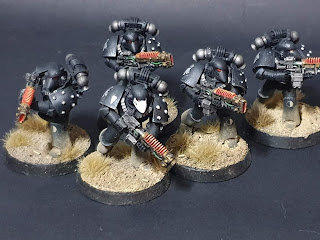 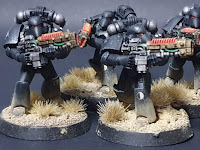 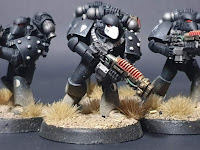 I'm really pleased with the brass used on the weapons. To my eye it gives them a bit more of a steampunk/grimdark look. 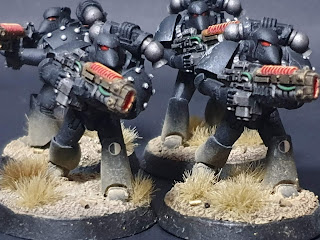 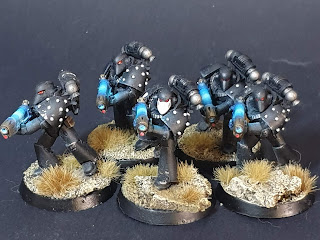 I am building a small centurion style Raven Guard force and these guys are the first squad completed. 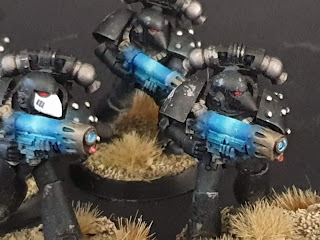 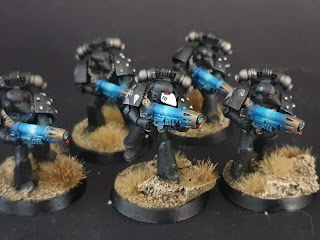 Different painting style, different basing and a new look from the Fists i usually paint. My first try at glow effects on the plasma coils too. 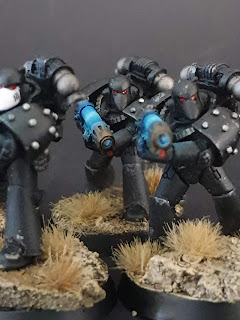 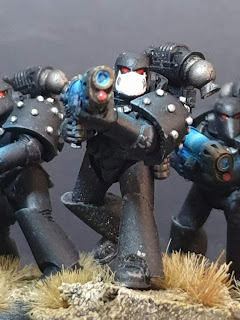 I have always loved the psyker aspect of GW games. The other worldly space wizard aspect is amazing for creating wonder and horror in a grimdark setting. 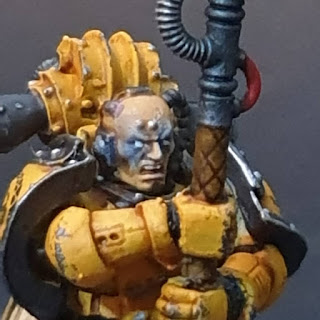 Now unfortunately, the VIIth legion did not field its members of the librarius after the edict of Nikea was introduced. They weren't even reintroduced into the rank and file. Instead, Dorn mandated that they should be confined to barracks upon the Phalanx until further notice. Now they weren't imprisoned but they were effectively quarantined. Whether Dorn did this over concerns and mistrust of his gifted sons, or if the primarch could perceive some other purpose for them remains to be fleshed out. Personally i think it was a little of both. 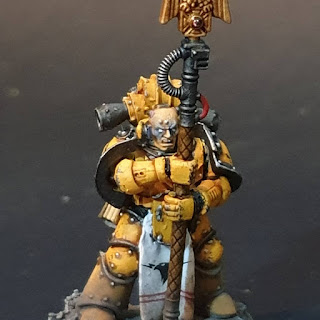 So as i am a super adherent to the fluff, ive not converted a librarian because of this.......but now things have changed. With the timeline creeping closer to the siege of Terra, and a time when all legions used anything they had on hand (including witchy mind bullets) to fight the enemy, i felt a little more at peace with building and using a librarian, mind you only for games set close to the siege of Terra time. 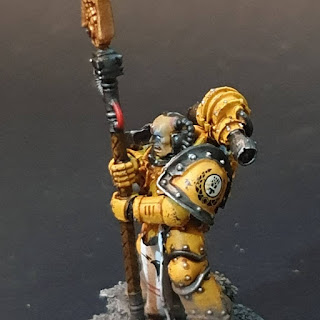 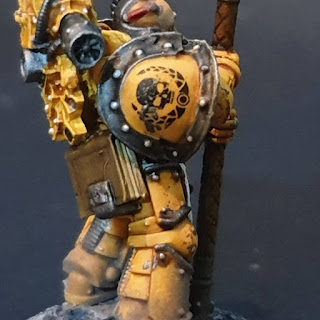 This particular librarian i've converted with the vision of a senior librarian prior to the edict of Nikea being enforced, stripped of position and rank, confined to barracks on the phalanx but then re-instated when everything sideways with Horus's assault on Sol. He has legion command insignia, with Terra unification honours. I modelled him no other weapons other than his force staff to try give the feel his powers are what he has come to rely upon. The pose was intended to not be one indicating direct fighting as i have a preference for the divination powers and i wanted to showing him acting in a support role because of his powers. 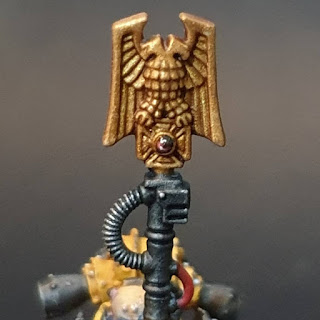 And the final touch i wanted to portray was the eagle topped staff and book on his waist, little signs of the Lectitio Divinatus creeping into the legions, almost as a direct opposite to the taint of the warrior lodges. Being a Terran born fist i felt he would be more susceptible to the teachings that the Emperor was indeed a god, even though it being contrary to the Imperial Truth.


its been a while. A long while for all of us here at AGIF. Life has a way of keeping things moving and changing and it's taken me away from talking about, working on and playing the hobby i love so much.....but here i am, returned and keen again to immerse myself in the Horus Heresy anew.

In the time that has passed, I've tinkered away with my beloved VIIth legion, but a few other projects have snuck thier way onto the radar.

First my collection of black shields. An ad hoc collection of astartes from the traitor legions who have remained loyal, Istvaan V survivors, emissaries and forgotten soldiers who have been picked up.

I will show more of these projects in the coming weeks as well as delve more into the discussions and thoughts of the Horusy Heresy as book 8 gets released.

Returning to the Heresy, dressed in blue. 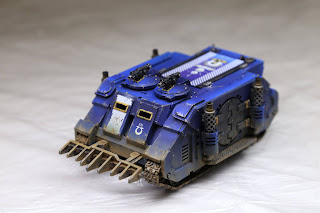 Hello readers, Felix here! It's been some time since the last update on here hasn't it?
It's been so long in fact, it seems like the dust may have settled over a war-torn and ruined galaxy over the years, at least to me.
My personal hobby drive evaporated at the beginning of 2017 and I honestly barely picked up the brush (both air and bristled) aside from small token forces for other games, my skills dwindling in the process which only served to make me more hesitant to knock up another mighty legion in the service of the Emperor again.
However, I have been amazed with the amazing work being produced by the heresy community as a whole. Amazing conversions, events and a steadily increasing level of amazing paint on armies that has served as a constant reminder of what it is I love about Heresy as both a game and a hobby.
So here, nearly two years after my last heresy game, I want to step back into the community for the game I honestly love so much!