G'day, Macca here, and I want to share the good word of Corvus Corax with you. Today sees me talking about my 2nd ever Heresy passion project. You see, the Raven Guard was a Legion I chose for selfish reasons. In short, they were:
-I wanted to try a dark army (don't it sucks)
-I wanted a Legion that wasn't released yet, because people get on bandwagons (Eldar, cough, Tau, cough)
-I wanted a Legion that was less common, and so more interesting to look at.

Anyway, enough of that, here is the very quick nuts and bolts.

So, you decided you want a Raven Guard Horus Heresy force, and I must say, you made a good choice. The Raven Guard are amongst the best forces in 30k, even if they don't have the badass terminator units or close combat monsters of other armies. This is ok, because you don't play an army like Raven Guard and expect to punch Kharn or Sigismund in the face in combat, instead, you are going to strike hard and fast from the shadows. Very fluffy.

When selecting your army, you need to take into consideration two things: your Raven Guard specific rules and restrictions, and your Rite of War. Whilst most Rites of War are neat but not overly effective, the Raven Guard one is excellent.

Specific rules: Infantry (not terminators) gain fleet of foot and infiltrate. Jump Infantry and Bikes get Furious Assault. The down side of this is that you can't have more vehicles then you have units with the rule 'Legiones Astartes Raven Guard'. That's no real drama however, as your force works best around infantry.

Rite of War: Decapitation Strike. Preferred enemy independent characters (target a unit with a character and let the re-rolls begin), you get to re-roll to seize the initiative and to deploy, you can take drop pods as dedicated transports across the army, as well as Deathstorm pods becoming elites. The downer is that you only get 1 Consul, can't take allies or fortifications, and only get 1 heavy support choice. Which is fine, because you're limited on tank models anyway, so just take a Sicarian or Fire Raptor and watch your opponent get pissed off at your air superiority.

Playing With The Raven Guard

Ok, lets start at the top: Corax. When it comes to Primarchs, on the surface he looks a bit dull, lower weapon skill, worse armour, but when you look at his special rules, holy shit! Your whole army will get automatic 6" run moves, and acute senses. On top of that, the big man himself is actually a close combat beast, able to tear apart Angron and even put a dint in the Warmaster himself. All the regular toys for killing Primarchs don't work here, because guess what? You wanna shoot him? Cool, snap fire, BITCH. Yes, if he isn't the closest model in the Raven Guard to your firing unit, you may only take snap shots at him. That means you can't use your Felblades, Typhons, even a Vortex Missile, because none of them can snap shoot. Corax will 99% of the time make it into your lines, and when he does, it's bye bye. On that note, twin archaeotech pistols (making him essentially a jump-pack Moriat on top of being a badass), +1 strength and initiative on the charge, and 3 combat modes which you get to pick each turn, being an extra D3 attacks, -1 to hit penalty to every model striking at him, and all attacks by Corax of a 5+ always wound, regardless of toughness. Yes, he will wound Toughness 10 on a 5+. Deal with it.

What the fuck man, Alan Bligh injected him with freaking hero steroids! 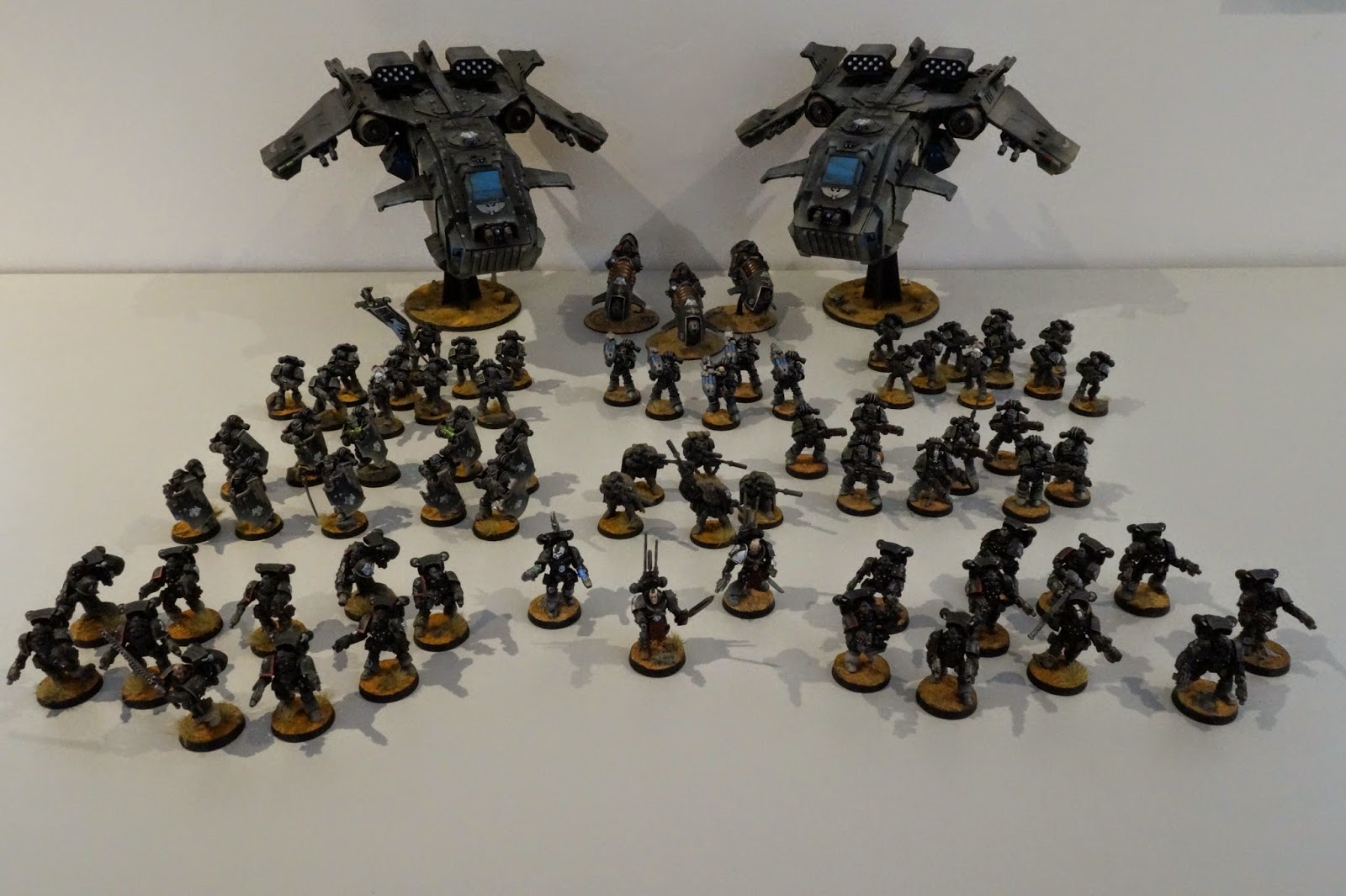 As far as special characters go, it plays like this: Alvarex Maun, yes, Kaedus Nex, maybe against Mechanicum.

Alvarex is simple: run him as the warlord, get re-rolls on all reserves, and you gain no-scatter deep strikes within 18". You can also use him for line of sight for any barrage weapons fired by friendly units. Yes, that means Death Strike Missiles fired from the UK will get reduced scatter here in Australia. Deal with it.

Kaedus guns suck. His infiltrate within 6" is handy, but the fact his guns are s4 ap4, albeit with rending, means he can't reliably kill power armour. That said, I was trying to find a use and decided that he would (after I tested the theory) wipe a 6 man Thallax unit in one turn. How? Shoot and assault my friend.

The Darkwing Storm Eagle is costly, but blind and concussive missiles are handy, the nose gun only being a heavy bolter is fucking shit, so I just go to regular Storm Eagles.

Dark Fury Assault Squads are shit. Too expensive for what they do, which is kill power armour in CC. Guess what, in 30k, AP3 grows on trees, you can buy a Whirlwind Scorpius for cheaper then this unit AND it will do s8 ap3 at 48". (and you'll use Alverax for LOS. What, problem?) 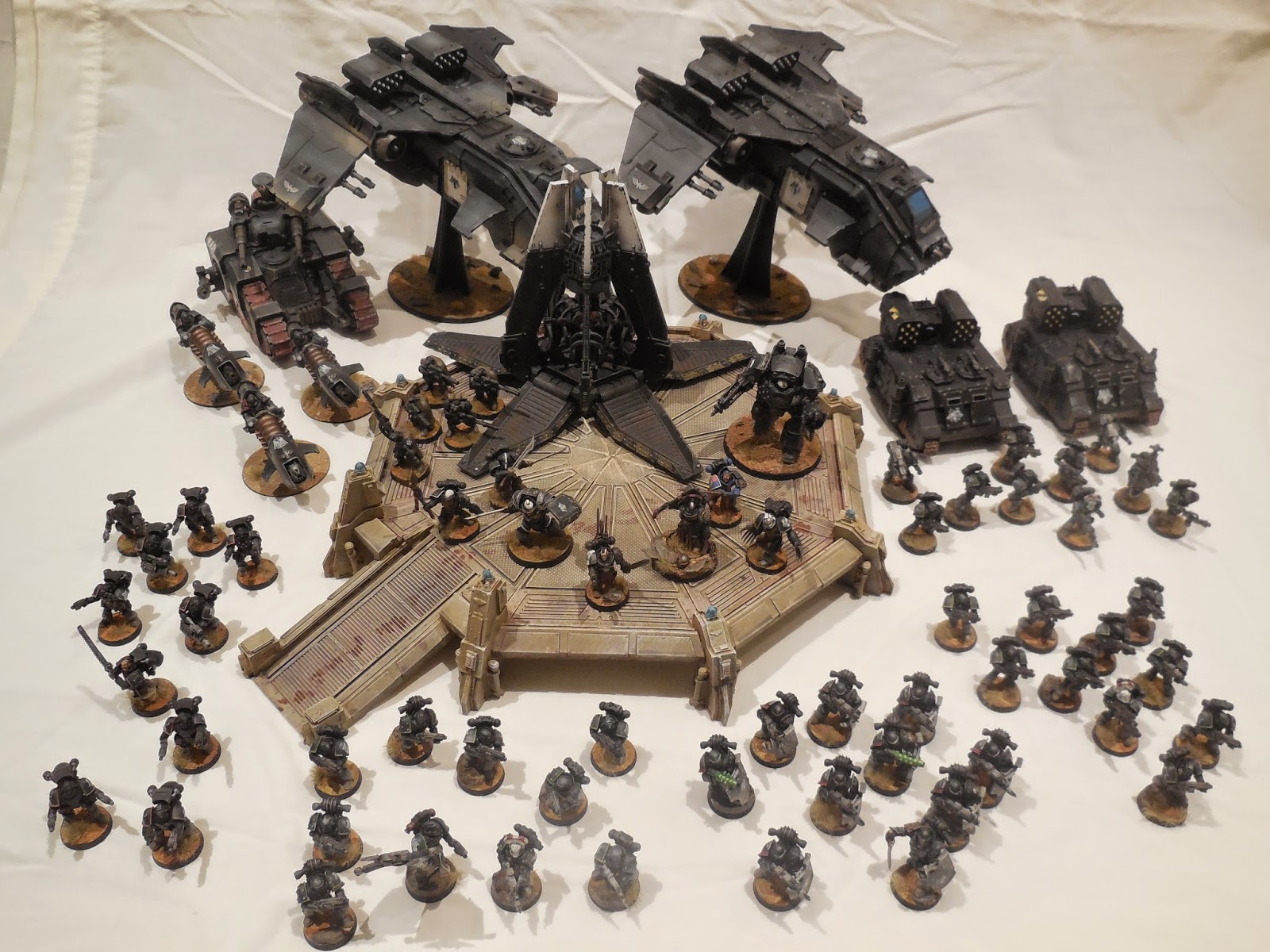 When selecting your actual troops you need to take into account your special rules. Infiltrating devestators for example is a fine choice. Using infiltrate across a wide amount of your army can force your opponent to really defensively deploy, lest you get an alpha-strike off that ruins their entire game plan. (Cat has had me do this to him about 15 times now and it still gives me a chuckle to see him lose his shit, which is probably why I do it 90% of the time haha.)

Jump troops and bikes are good choices to go alongside the infantry in the Raven Guard. This is because they gain the furious charge bonus, plus, they are rapid support elements that can be alongside the infiltrated units in turn one. Further, if you play like me, it gives you deep strike options, and you can really have some fun with this.

So, What's The Play Style?

Hit hard and hit fast. Seriously. You will lack heavy armour and heavy infantry 90% of the time, so you have to kill your enemy heavy shit asap. Personally, I run Alvarex in nearly all of my lists, and that's because he is a force multiplier. By this, I mean he increases my whole army effectiveness. Reliable reserves thanks to his warlord trait, (re-roll reserve rolls) as well as his special jukebox which allows no-scatter deep strike.

The way it works is simple: I infiltrate him with a squad, such as recon marines, and hide him as best as possible. In turn 2, my moriat and destroyers will drop in, safely exactly where I want them, and then I open up the whoop ass. On top of that, I know my air support is almost certain to arrive and help back the push.

When using the infantry, you have no more killing power then any other legion, but you are faster, you can run around the battlefield all day long, moving to objectives, or watching a squad of World Eaters try and charge you but never making it. Your troops are a great speed bump for your enemies, allowing you to concentrate on killing what matters.

Special note: My FUCK YOU list to Mechanicum players in 1500 points is as follows: Moriat with plasma, 2x 10 destroyers with Rad missiles, Master of Signals, 2x tac squads, 1x dev squad. If you play it right, you can kill TWO castellax units a turn. How? Destroyers fire rad missiles, which will hit 2 maybe 3 castellax with each shot. You get 4 shots a turn. Each wound is on a 2. You also get to re-roll it. It's also ap3. If they take a wound, their toughness drops by the amount of wounds caused. IF you can hit two castellax from two slightly different directions, you can drop them to toughness 4 or 5 with some savvy shooting. Then, you riddle them with bolter fire from the tacticals, and if close enough, charge them with furious charge toting destroyers. The moriat and master of signals will deal with Thallax and Tech Thralls with ease, and the devs can deal with any armour. 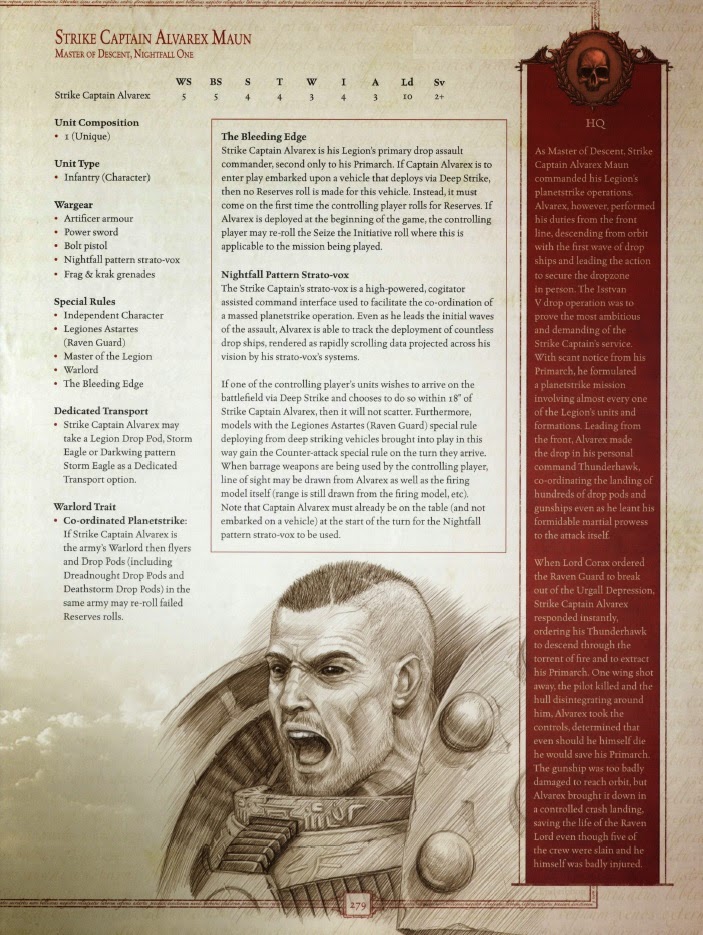 That's it, that's how they roll. Simple, sweet. You don't rely on plasma, melta and all that to do your killing, just good old fashioned bolter fire, speed of manoeuvre, and destroyers coming out of every orifice. But that's fluffy, and the Raven Guard are a great example of a fun fluffy force that is also very competitive.

That's all from me, if you have Raven Guard, or have played against them, let me know what you think, Macca
Posted by Unknown at 16:37