G'day folks, boy what a weekend! I have been 1500KM North, spent some time with some great mates, and made my way back home all to bring you some photos and talk Heresy. So where to begin?
I played my mate Michael from over at the Eye of Horus Podcast in round 2, so I thought I would make a battle report out of it. Needless to say, with two powerful armies, and two good generals, we were set to have a great game.

A little history leading into this, Michael and I had last played more than two years ago, where my Death Guard in 40k beat his 40K Salamanders, so Michael had some pride to restore today.

The mission we rolled up, depressingly, was the Relic. This is one of those missions I groan at, especially made worse because I didn't take note of the revised 7th edition rules for it (having hidden under a rock when it comes to 40k missions for over a year lol) which only came back to bite me repeatedly! Deployment was diagonally. 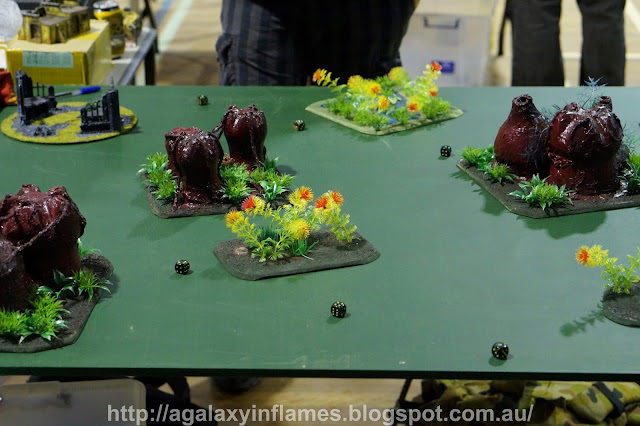 Michael being the cheesey yellow bastard that he is, set up a nice little gun line, with a bunker on the left (manned by a BS5 twin-linked, tank hunter lascannon dev squad... argue that cheese Michael!) and a sweet Vindicator on the right flank. 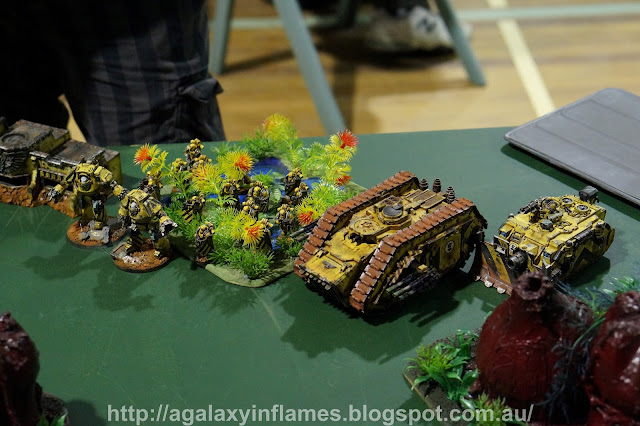 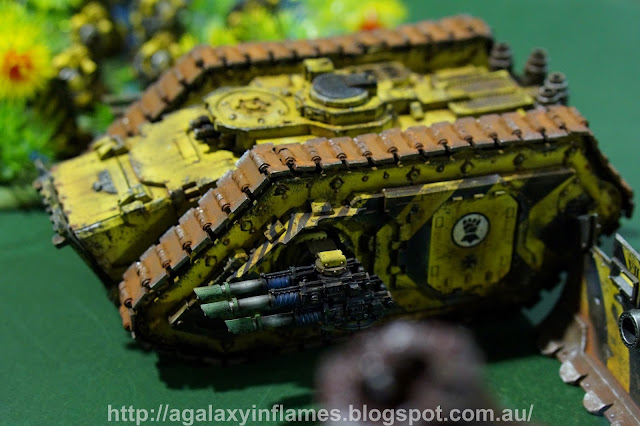 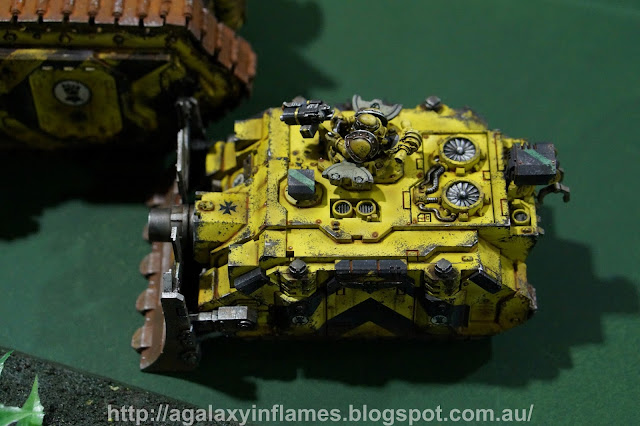 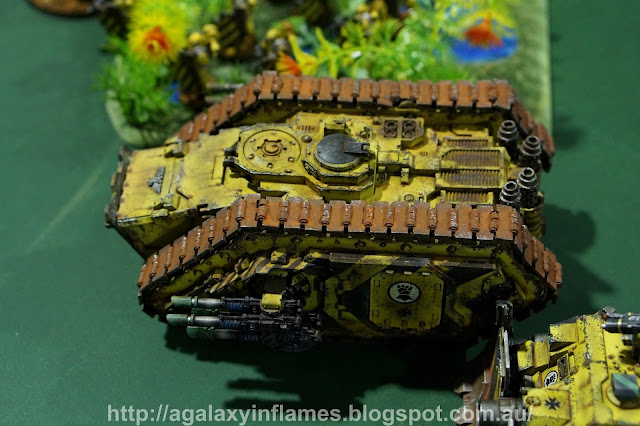 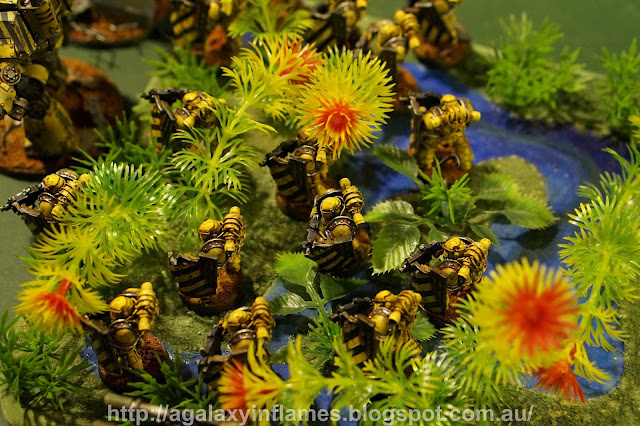 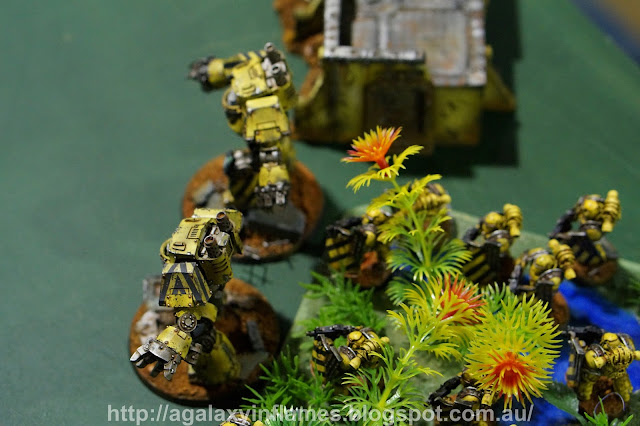 The Iron Warriors were definitely on the worse side of the table, so I had to do what I could to limit the carnage. His lascannons could see everywhere due to Michaels excellent placement, so I had to use cover in the few places I had it, or, in the case of my Tyrants, deploy a single inch outside of his lascannons range, lest they die on turn 1. 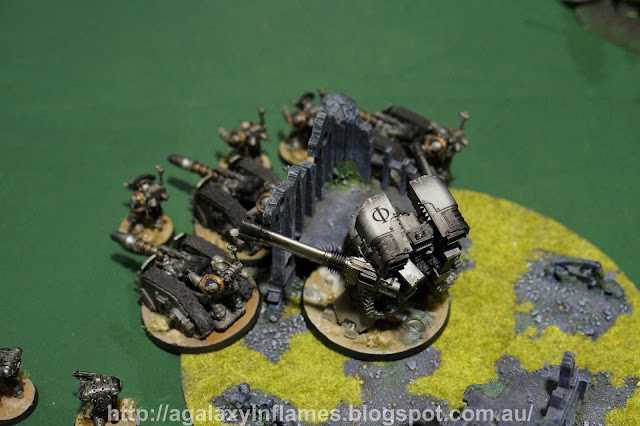 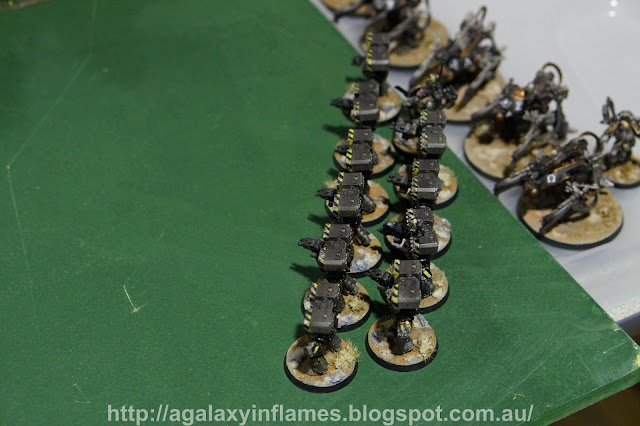 The Relic itself was some Imperial Fists geneseed. Our armies were just dudes looking for dudes 'seed'. Sadly, I had incredibly limited Line of Sight to the relic, whilst Michael had the only open side. Again, the bastard sure picked the right side of the table! 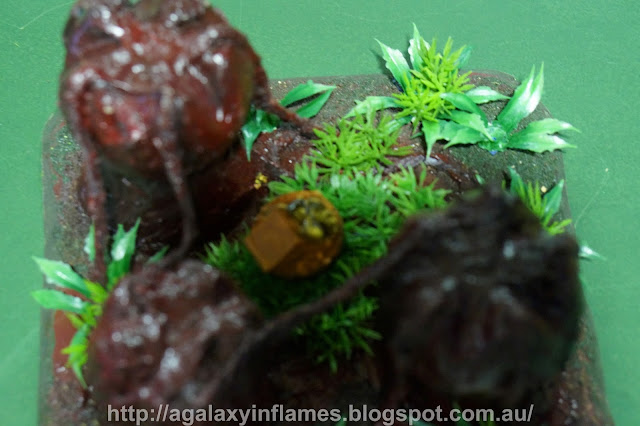 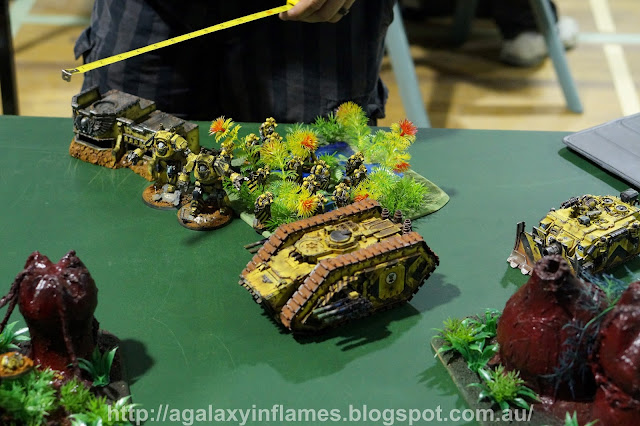 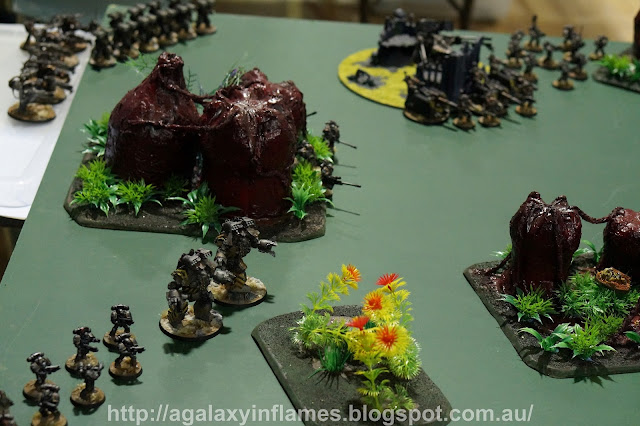 Turn 1 saw a general advance from the Imperial Fists, our Contemptors (being almost identically armed and used) sticking to opposite sides of the relic terrain. The Vindicator was out of range, however the Lascannon devs in the bunker all but shredded the IW Deredeo. 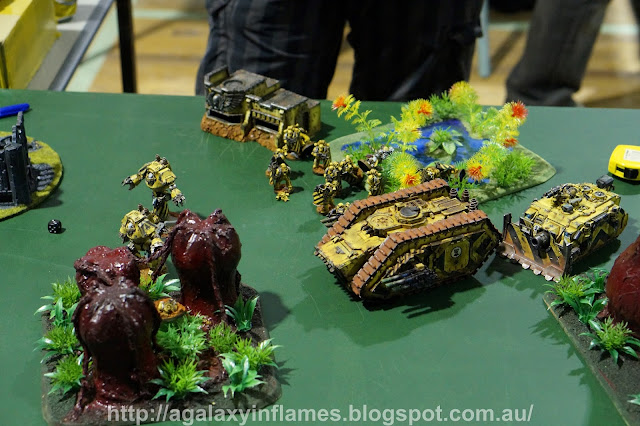 The IW turn one was a pathetic whimper, with my entire army queefing, merely taking 3 of the 4 hull points off the bunker (despite 3 graviton cannons and 20 krak missiles) and a single hull point off the Spartan, and leaving haywire blasts in a lot of places. 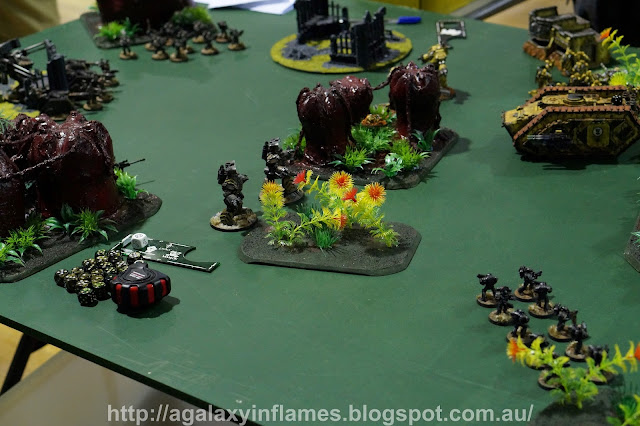 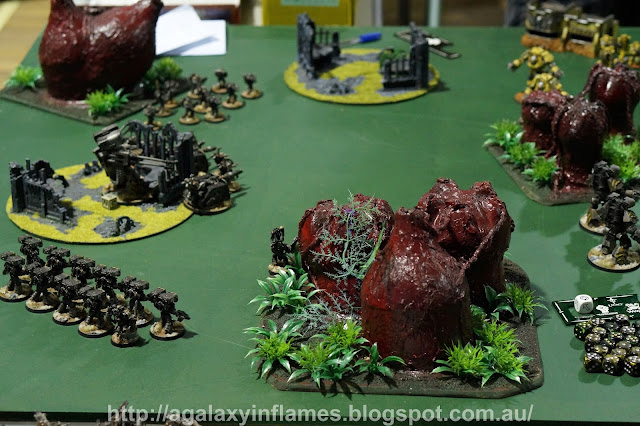 Turn 2 for the Imperial Fists saw the Spartan dump a ton of dudes onto the relic. The unit was buffed by a pimped Praetor and a Primus Medicae, both in Cataphractii armour, making them as tough as nails. The IF promptly killed one dreadnought, and left the last Contemptor on a single hullpoint, but able to move and charge next round. The only solace was the Vindicator imobilising itself in the haywire patch safely away from the rest of my army. 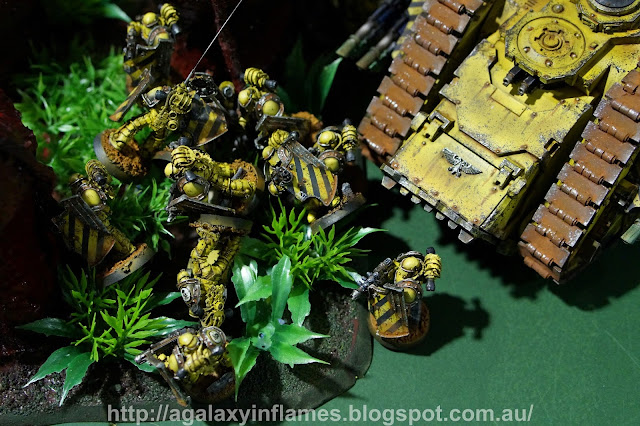 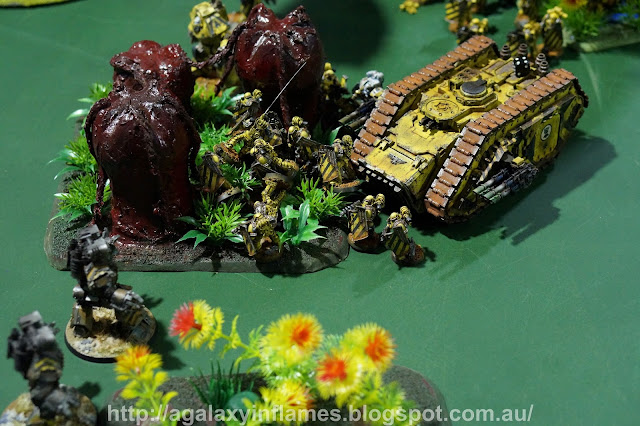 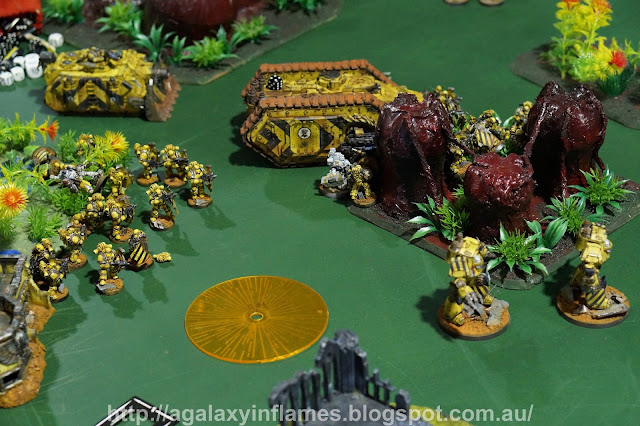 The 2nd turn for the IW saw some interesting moments. The Bunker was knocked out, and the tyrants elected to use frag missiles on the devestator unit, causing 24 wounds on the Devs and 33 wounds on a squad of breachers. Michael frustratingly failed very few saves on his breachers, however the dev squad was almost crippled (corpses may be seen on the far left top corner). My contemptor was a lazy 5" from Michaels Spartan, but I rolled a 1 for dangerous terrain and sent it to the graveyard, ending my turn. (I should point out, hilariously, that I had failed every single invul save on both the Contemptors and Deredeo as well as 1 of 2 saves on the Tyrants. I was shedding manly tears.) 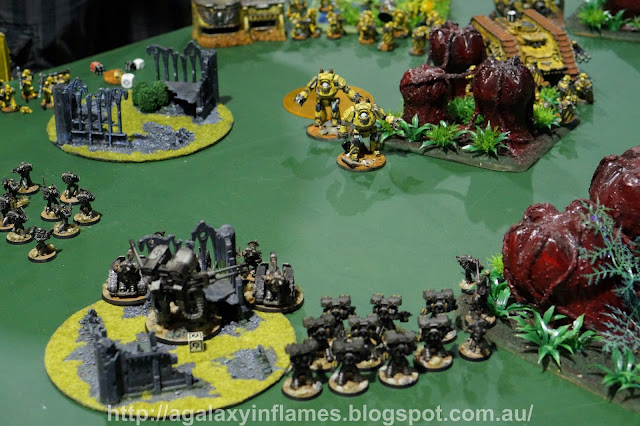 At this point, the Imperial Fists got into their Spartan and proceeded to drive away. I promptly realised that 7th ed had changed the relic mission. From this point, the game really slowed down, with weapon range and a lot of LOS blocking limiting the casualties on both sides to a mere handful for the next few turns. 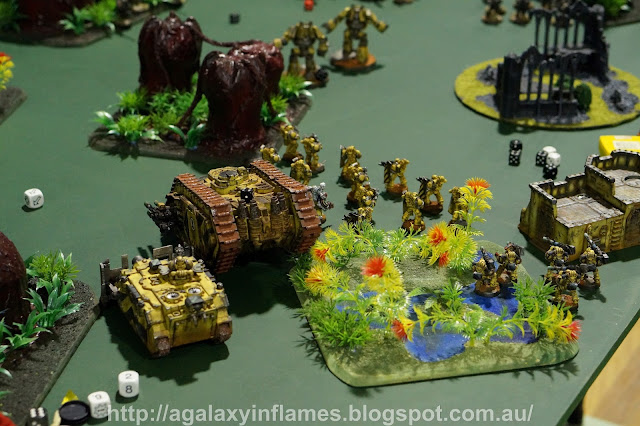 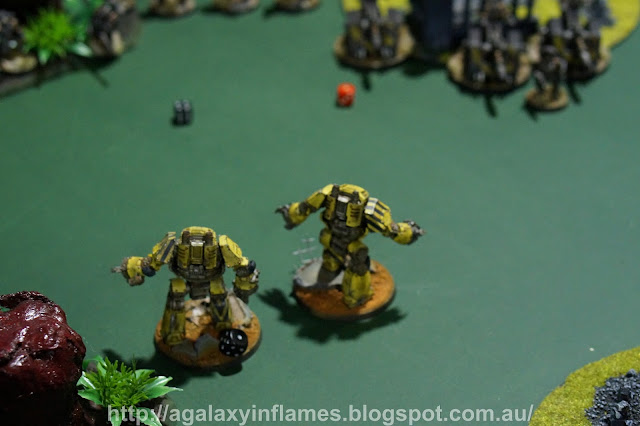 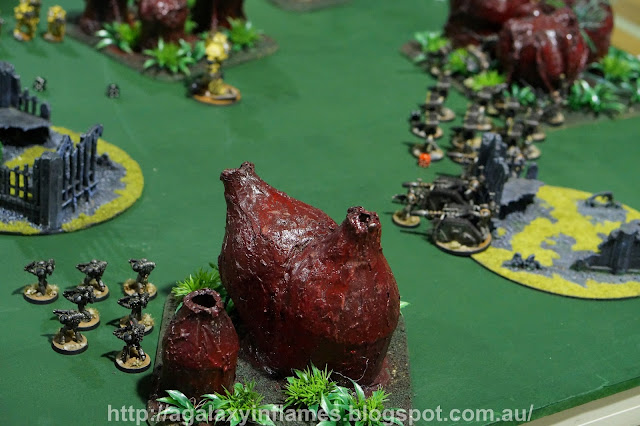 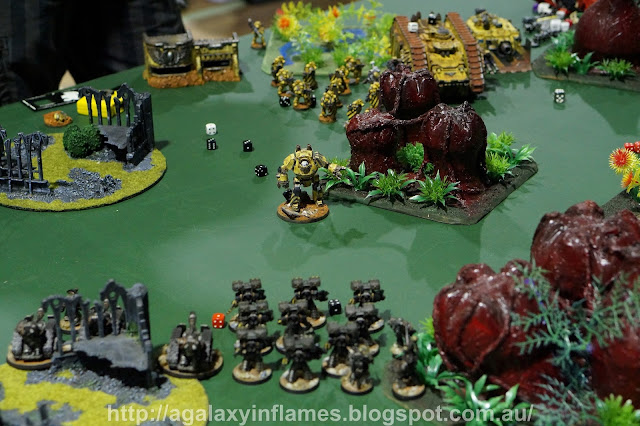 The stalemate broke when on turn 4 the Praevian and his Vorax entered play. The Vorax unleased lightning guns and rotor cannons into the visible breacher unit, but due to their Primus medicae and their toughness of 5, they laughed and lost only 3 men out of 13, not even enough to force morale. 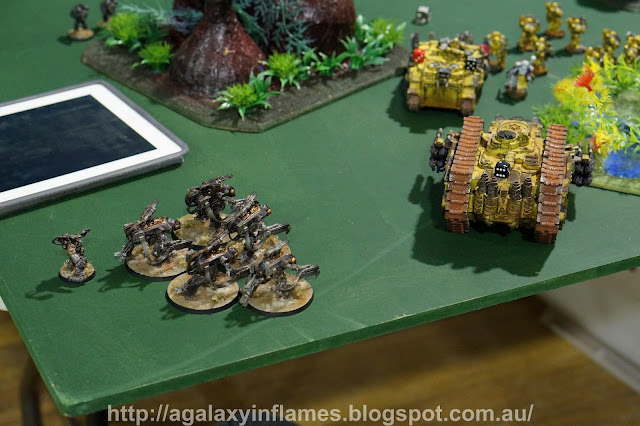 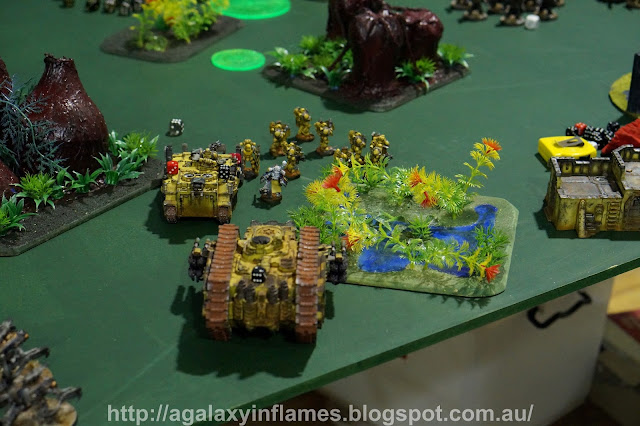 As the game ran out of time, Michael wisely assaulted my Vorax from the Spartan, and with a 'killing blow' armed commander managed to cut down 3 of my valiant praying mantis automata. The game ended with said squad in assault, holding the relic on his turn 5. I got a single VP for linebreaker, and he got 3 for the relic and 1 for first blood. A win to the Imperial Fists! 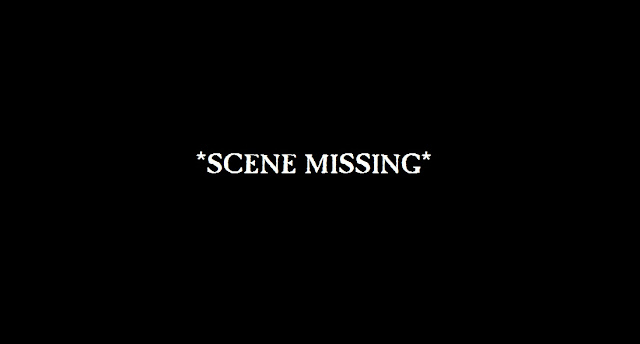 Wow, what a game. If a few things had gone differently, it would have been a very different game. The LOS blocking terrain between my units and the relic hurt me to no end, and the Contemptor dying to dangerous terrain was a game changer (his 5 chainfist attacks on the charge against his already down to 4 HP Spartan would have changed things dramatically). Michael has his vengeance, we are now at one game each and I'm happy about it. Yes I lost, but material wise, I came off better. My defensive gunline was poorly equipped for a mission of this nature, whilst his multi-tasking army got the job done spectacularly.

By the way Michael, you're still a jerk for going all GTA in your Spartan.