Ok guys, bear with me cos' this is a big one.

I got home from work yesterday to find this on my doorstep. Ding ding ding! I love reading the Master Minis blogs, so when the Painting Buddha said they were releasing several tutorial DVD's, I scooped them up. Why? Well, I'm not QUITE arrogant enough to think I can't learn something new, and the techniques in these are very European (pastel finishes, NMM etc).

The important part of course was the other two boxes. One of them contained the Warmaster himself. 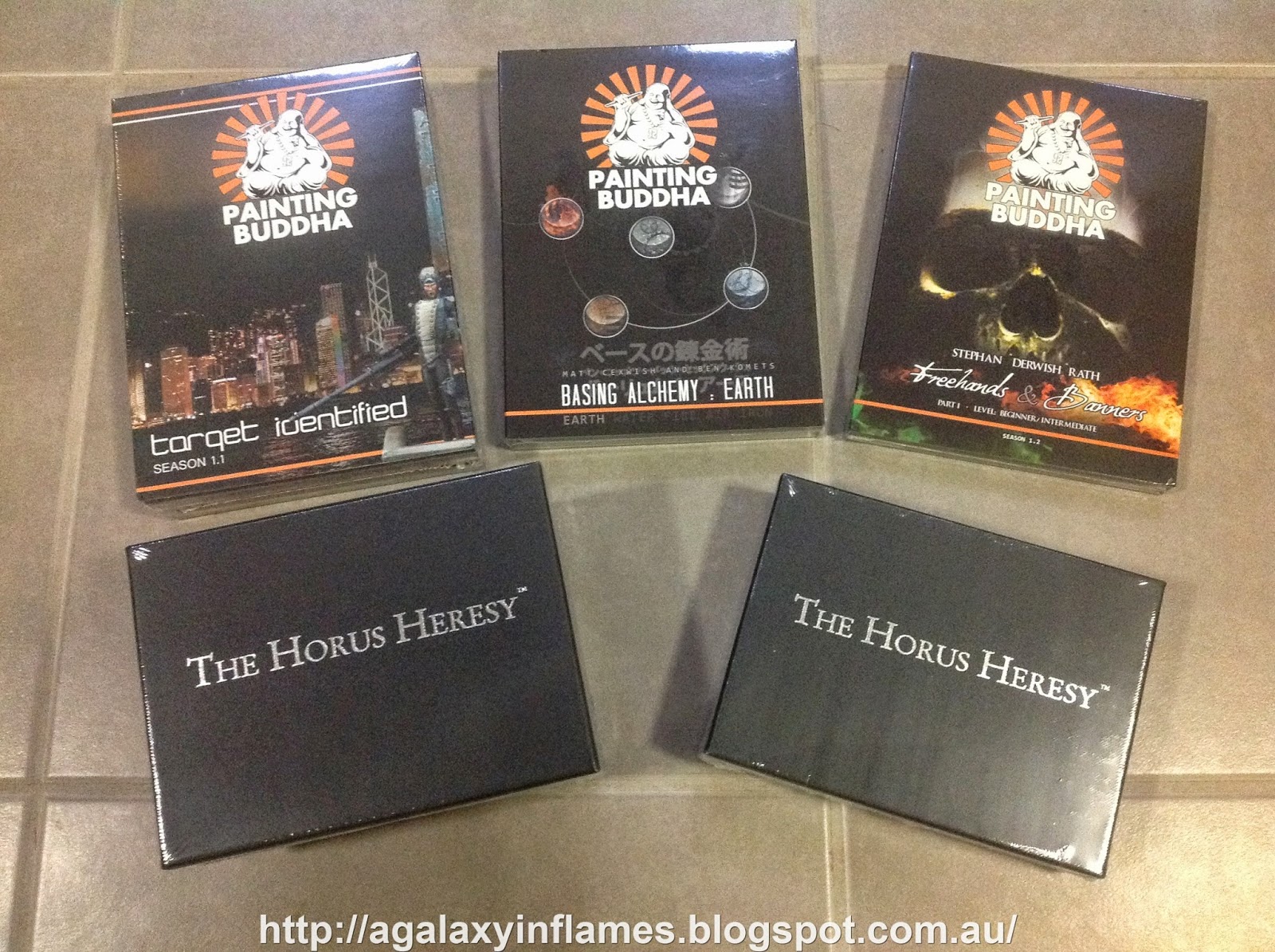 So, Horus is BIG. I was surprised, I knew he was big, but as Angron was the only other Primarch I owned, due to his pose I was unsure as to scale. Well, here it is. 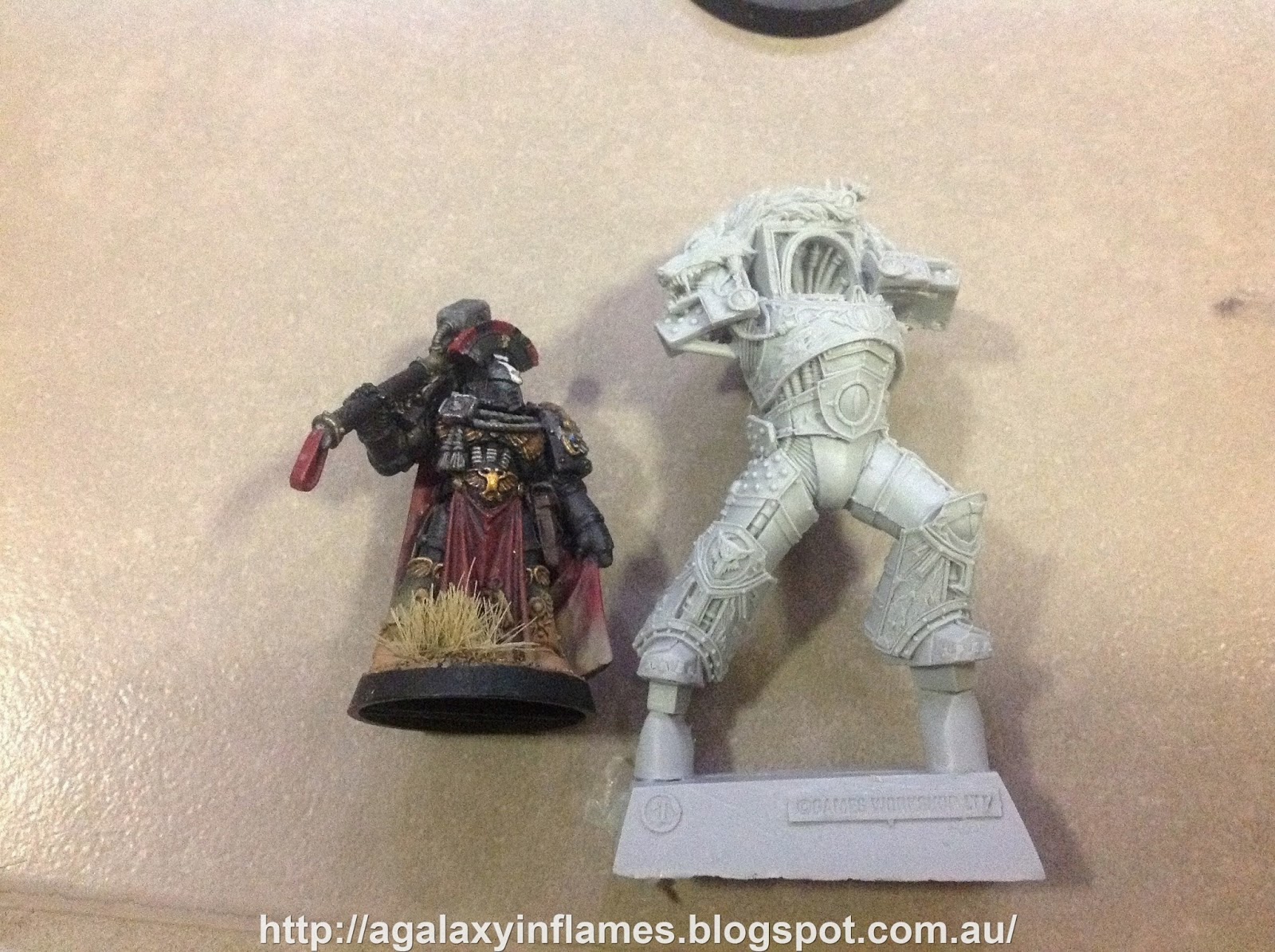 To start with, I  kept him on his little casting base. This gives me something to hold on to, and also lets me sit him down flat when I'm letting him dry without the risk of snapping a toothpick. Now, the key with resin work is that you HAVE to clean it. I use the old warm soapy water, but it is important to remember that due to the porous nature of some resins, the releasing agent can be very hard to shift. If that is the case, don't be too worried, but do invest in a good primer. I like Tamiya ones, but there are a lot out there. The trick, as here, is to not try for a solid coat. You want to have a slight spatter quality, as this provides miniscule surface texture, which future paints will easily adhere to. 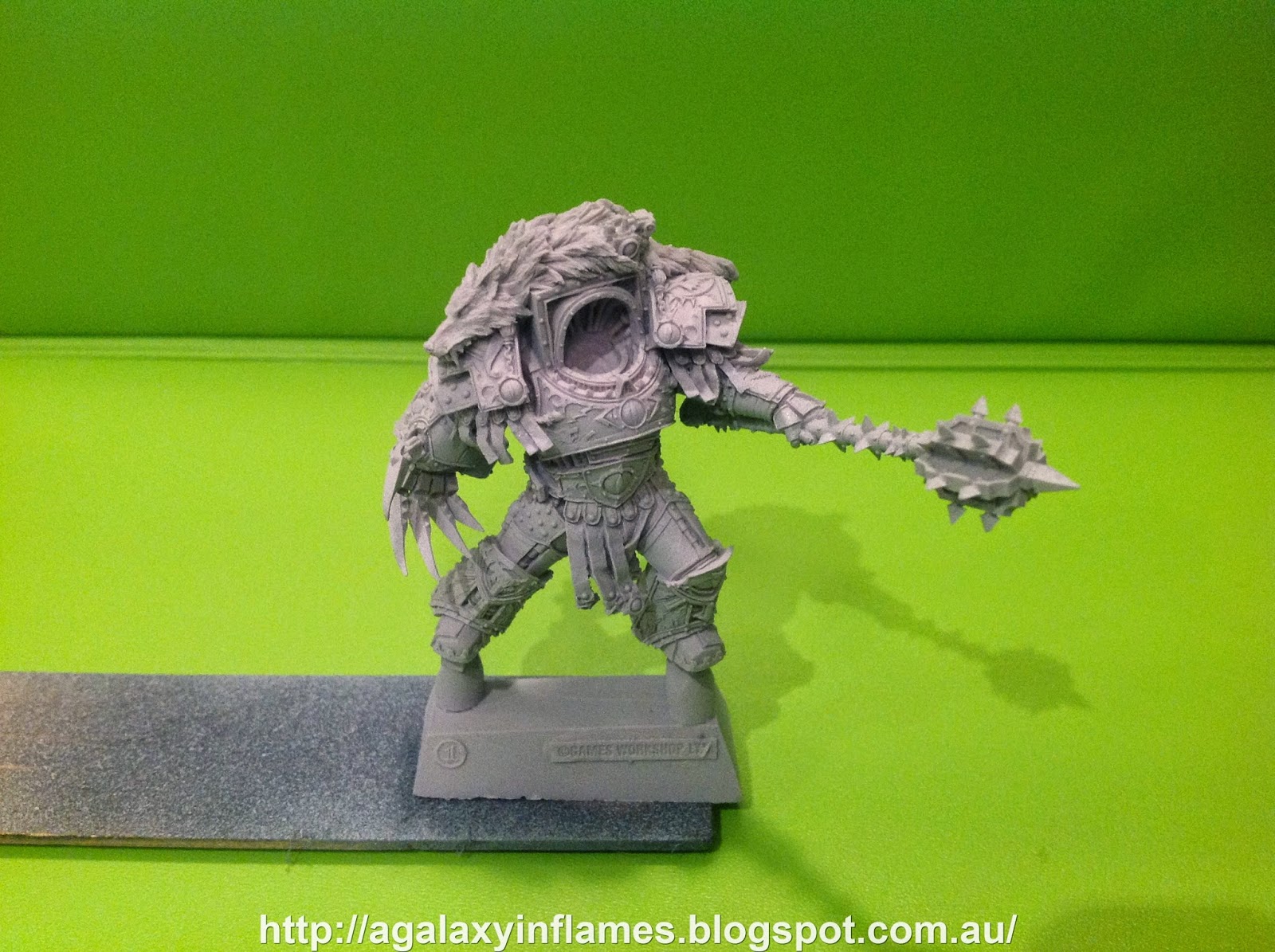 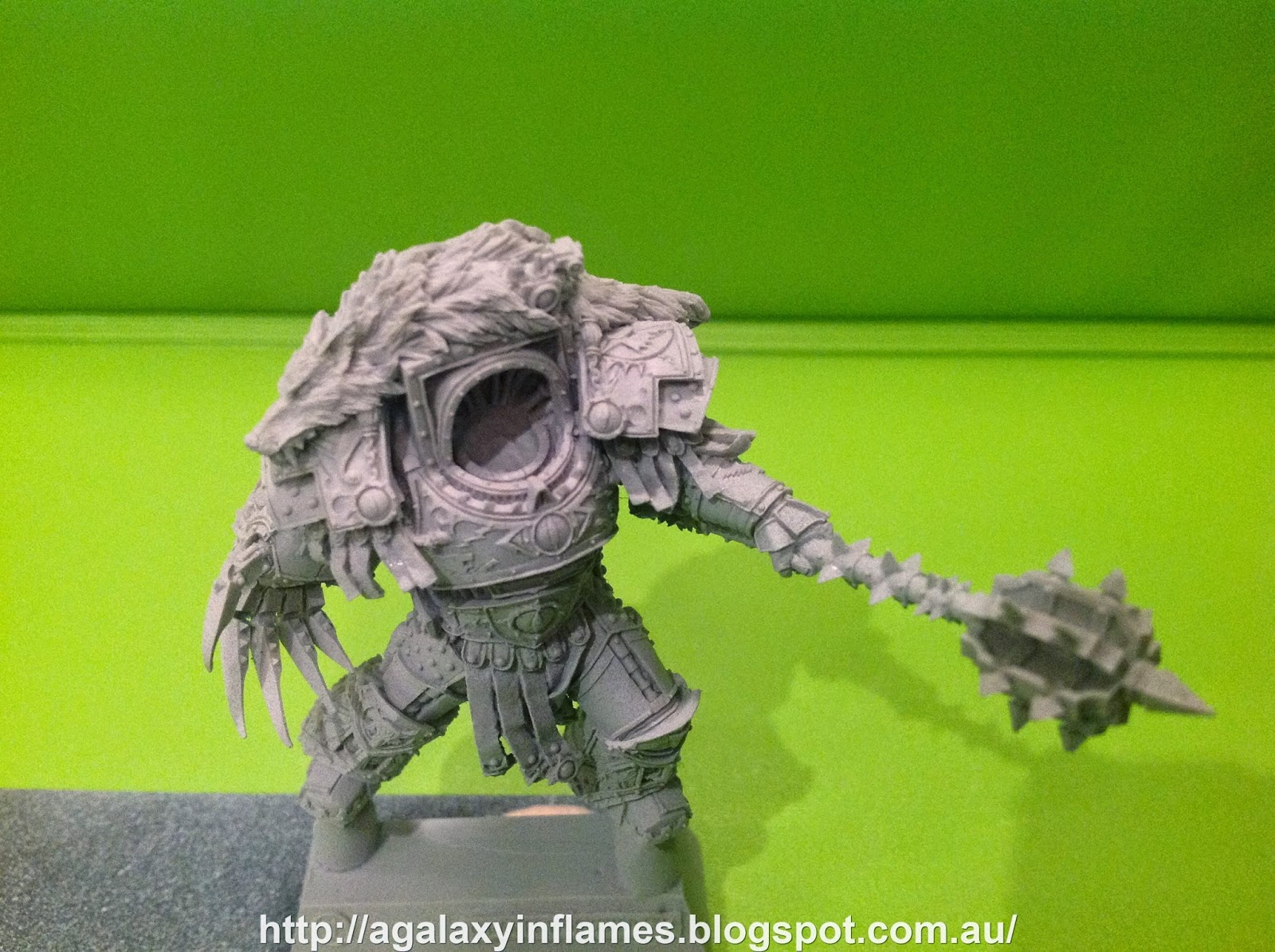 Although I cover the base in part 2, I would like to point out some basic things I did here. I have drilled a tiny hole into the base, and placed a 2mm magnet into it, as there is a small rock which hides Horus' base and it just sorta loosely sits there. I thus marked the rock with a small black texta mark, before drilling and magnetising it. This is important prior to painting as I love test fitting. Too many times have I been stung by models which don't fit correctly after I've painted them (1990's daemon princes and chaos knights, arrrrgghhhh!) 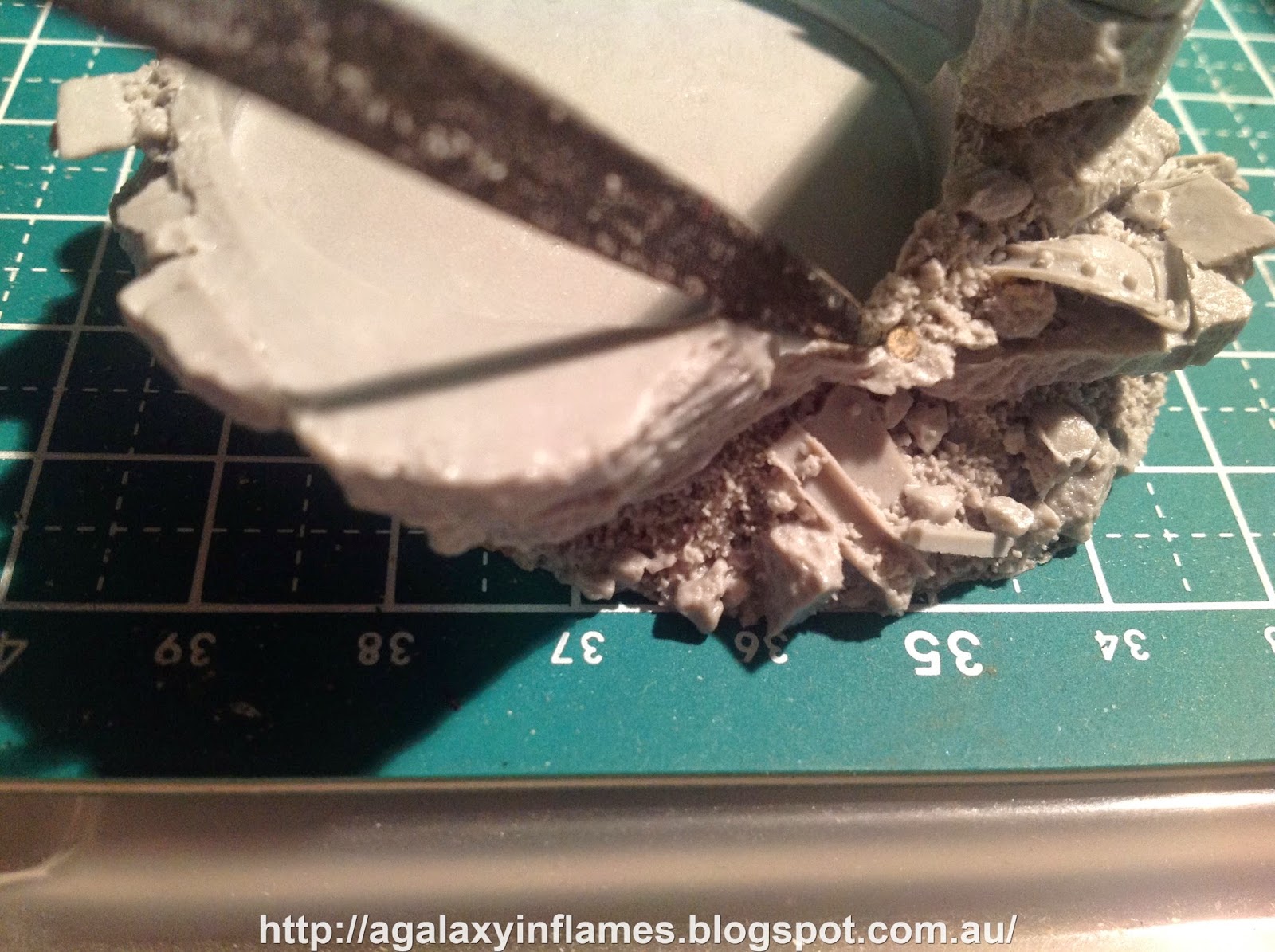 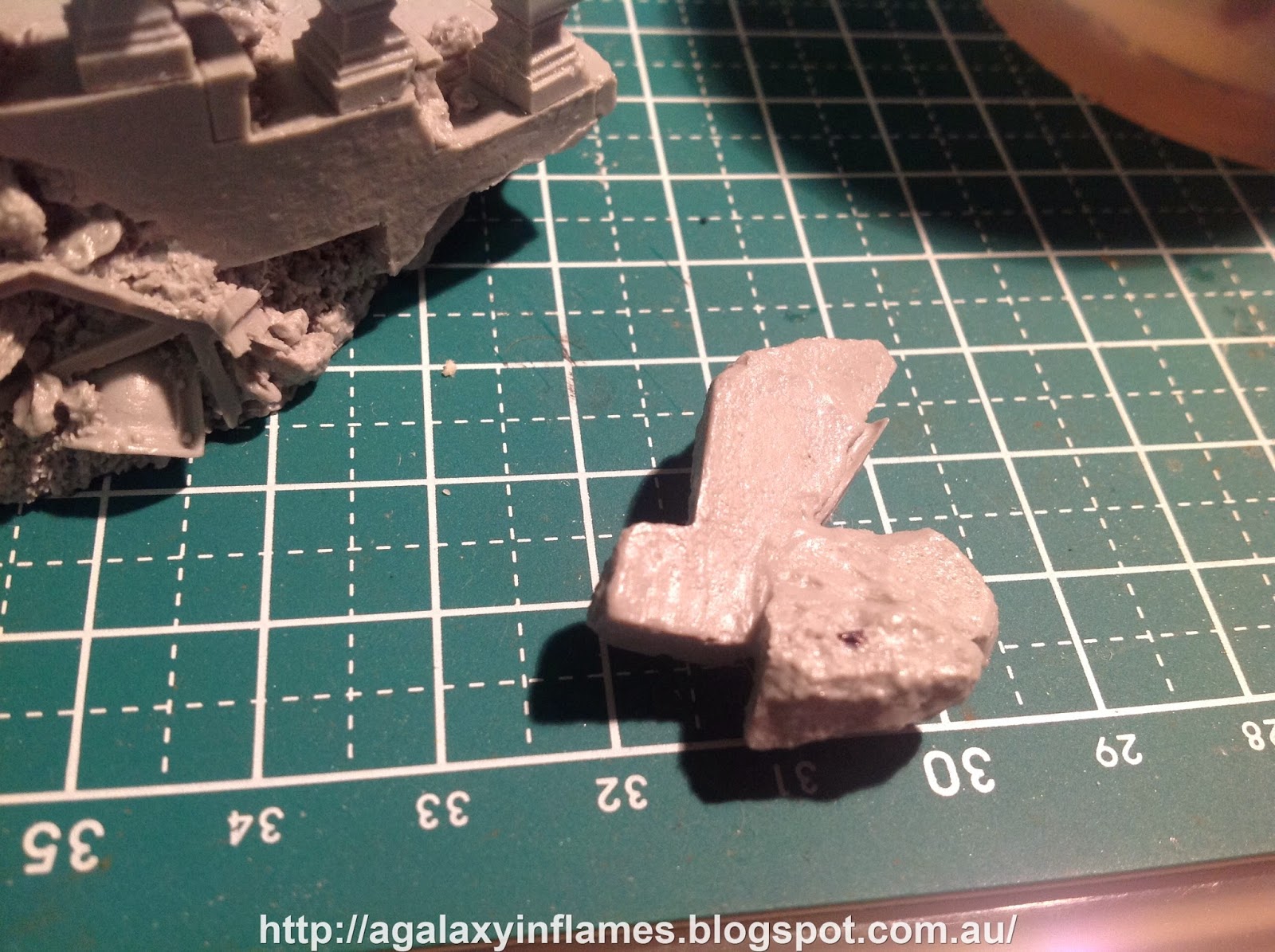 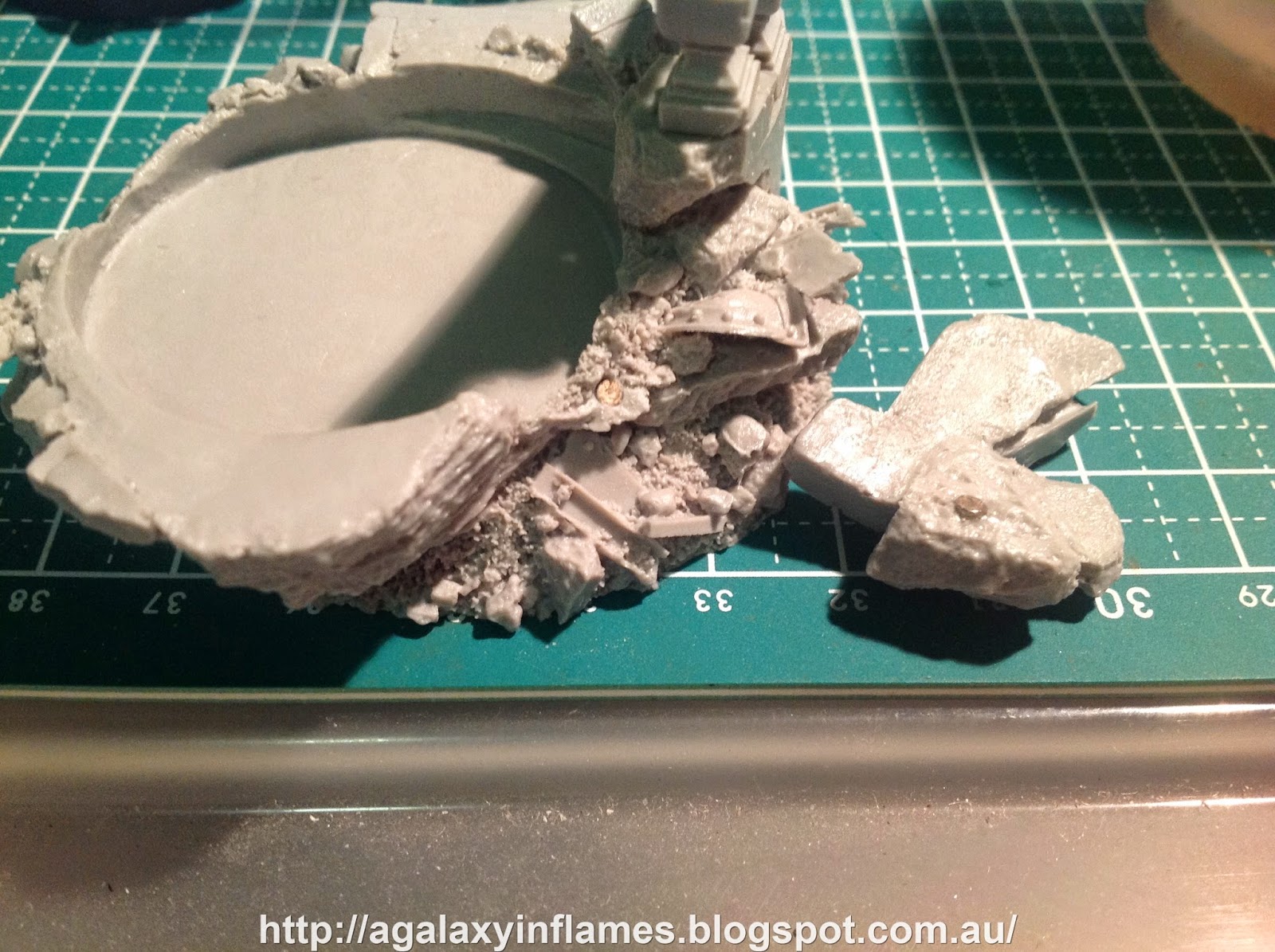 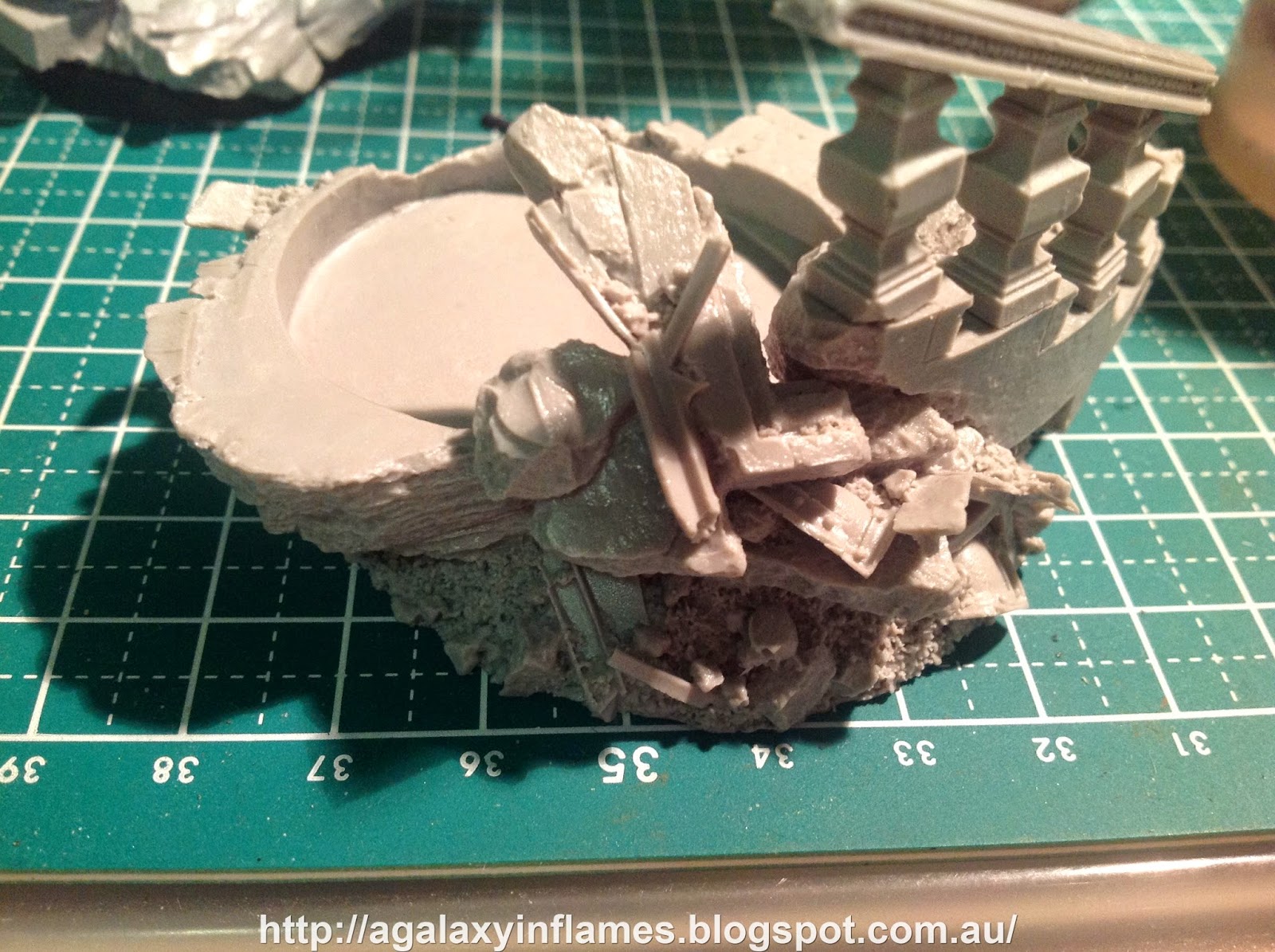 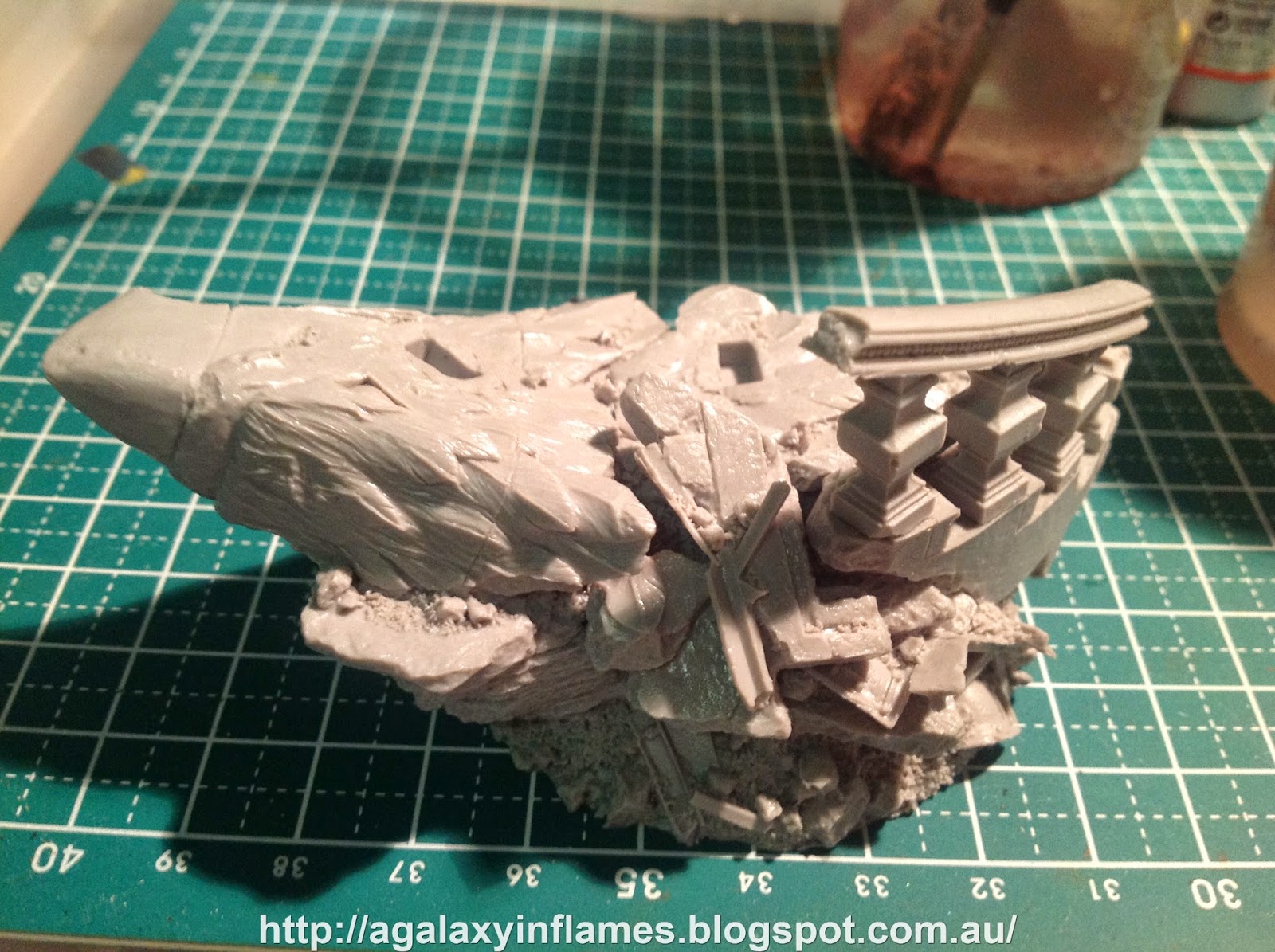 First up, I applied a chaos black spray coat over the primer to get my dark base. Over this, I hand painted a 50/50 mix of Orkhide Shade and Stegadon Scale Green. From here, I did a coat of just Stegadon Scale Green which all but covered the previous layer. I also put a small drop of red on the 'Horus eyes' in order to remind me I didn't need to do them green. 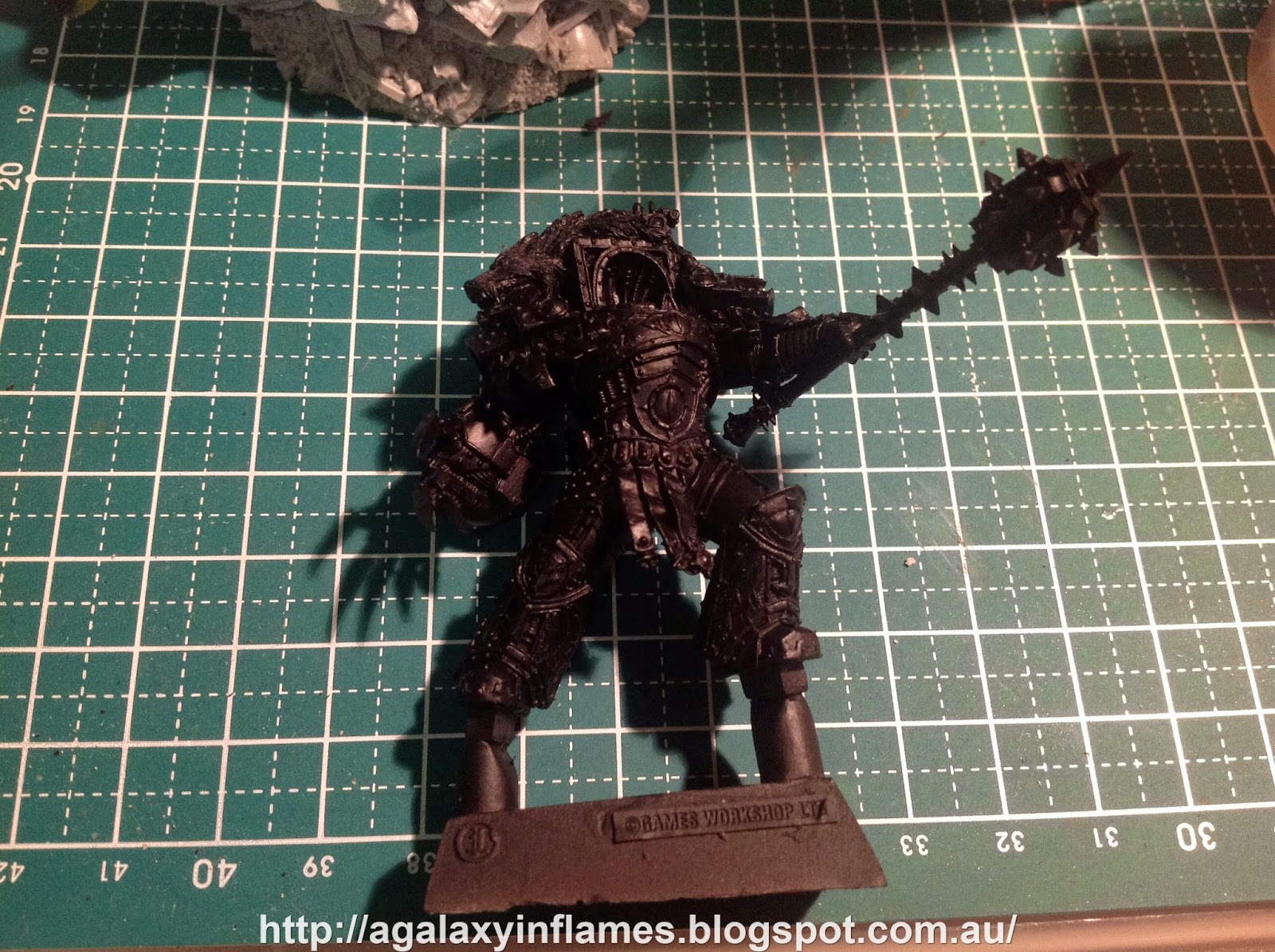 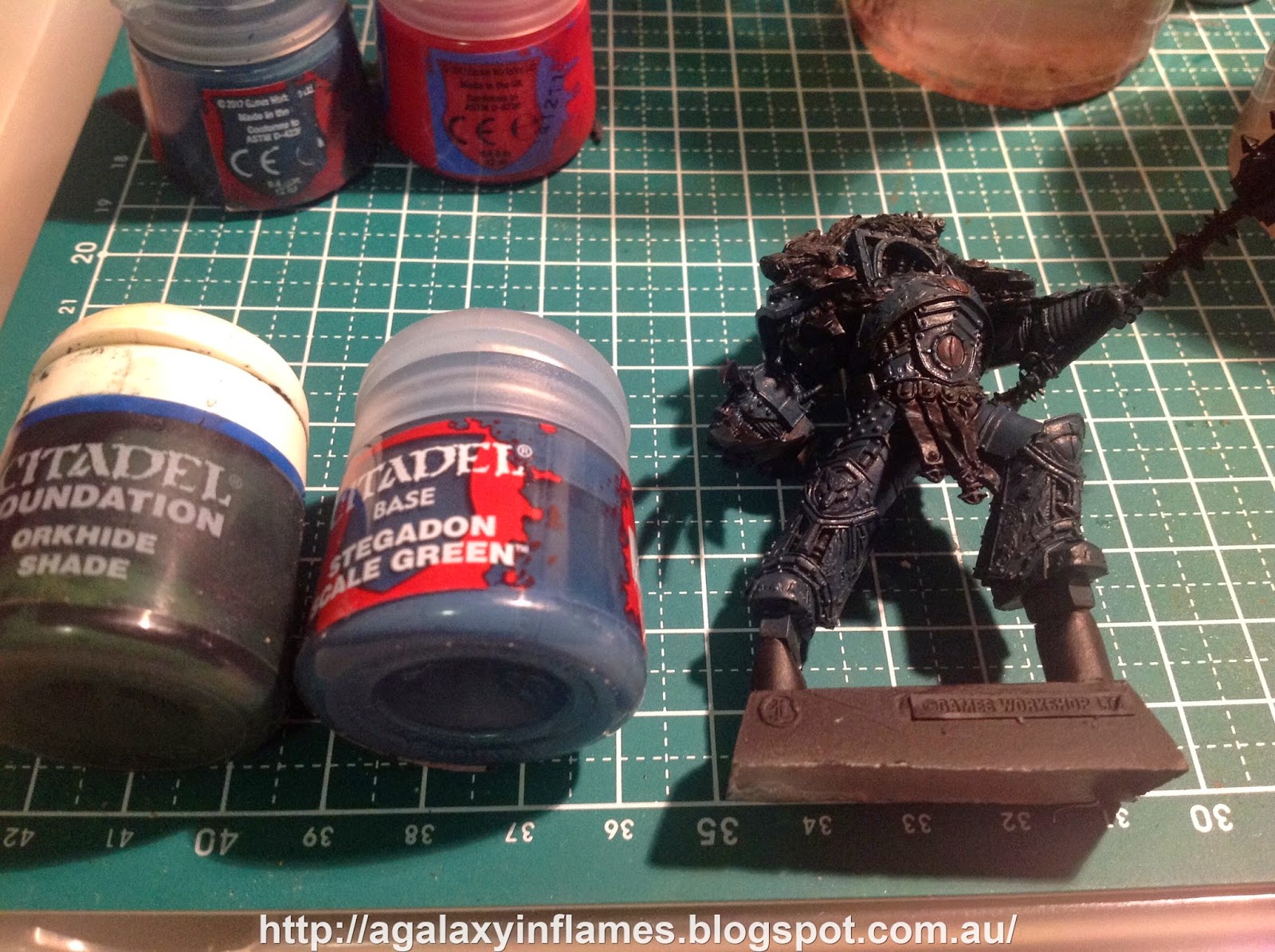 Next, I applied a 50/50 mix of Sotek Green and Stegadon Scale Green in a wet blend. As you can see, the contrast is there straight away (view the chest and abdomen in the first image). From here on, I went to just Sotek Green, 50/50 Sotek Green and Temple Guard Blue, followed by just Temple Guard Blue. To achieve my blends, I am using a wet palette, and I thin until I get a consistency similar to full cream milk. 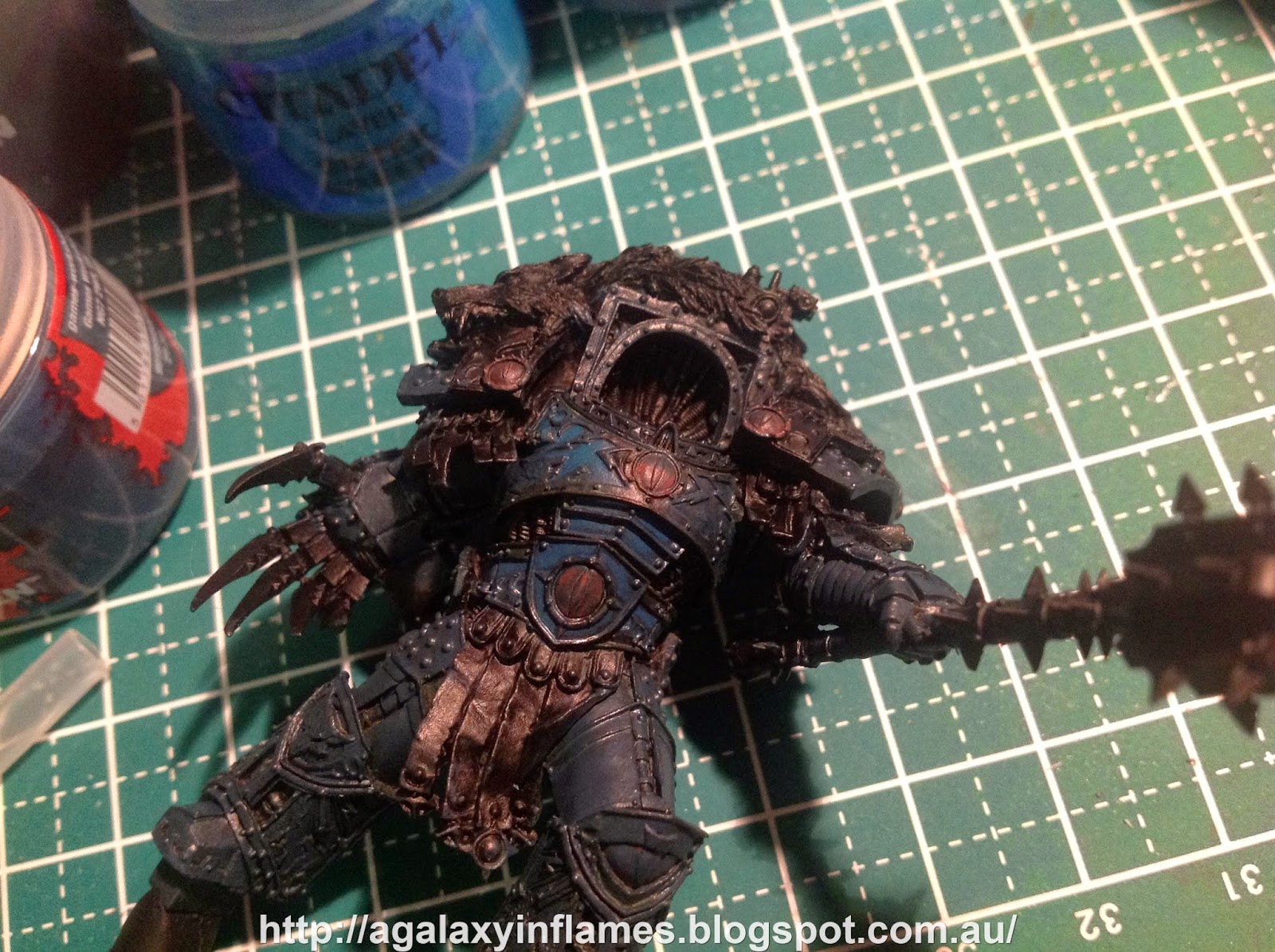 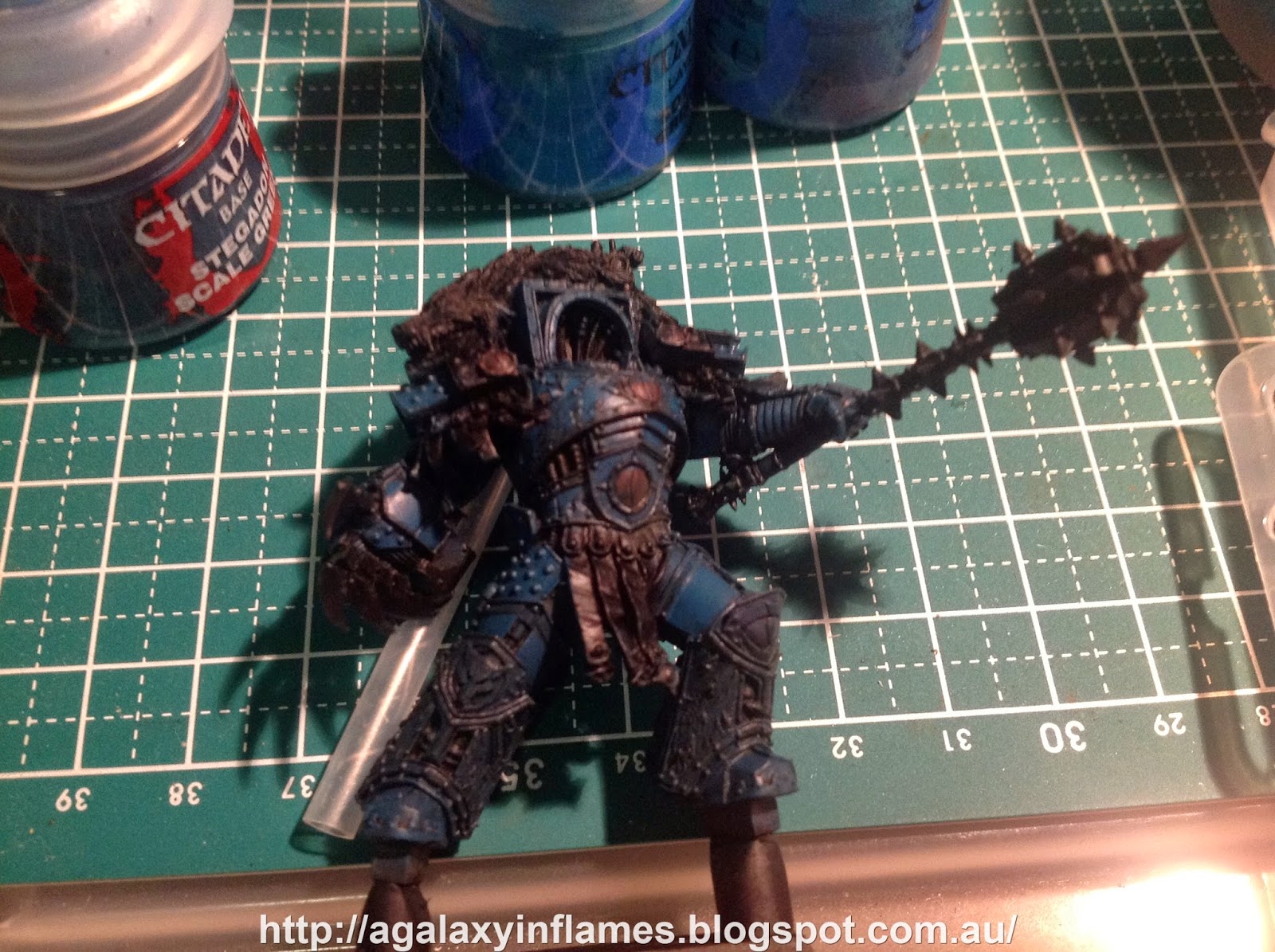 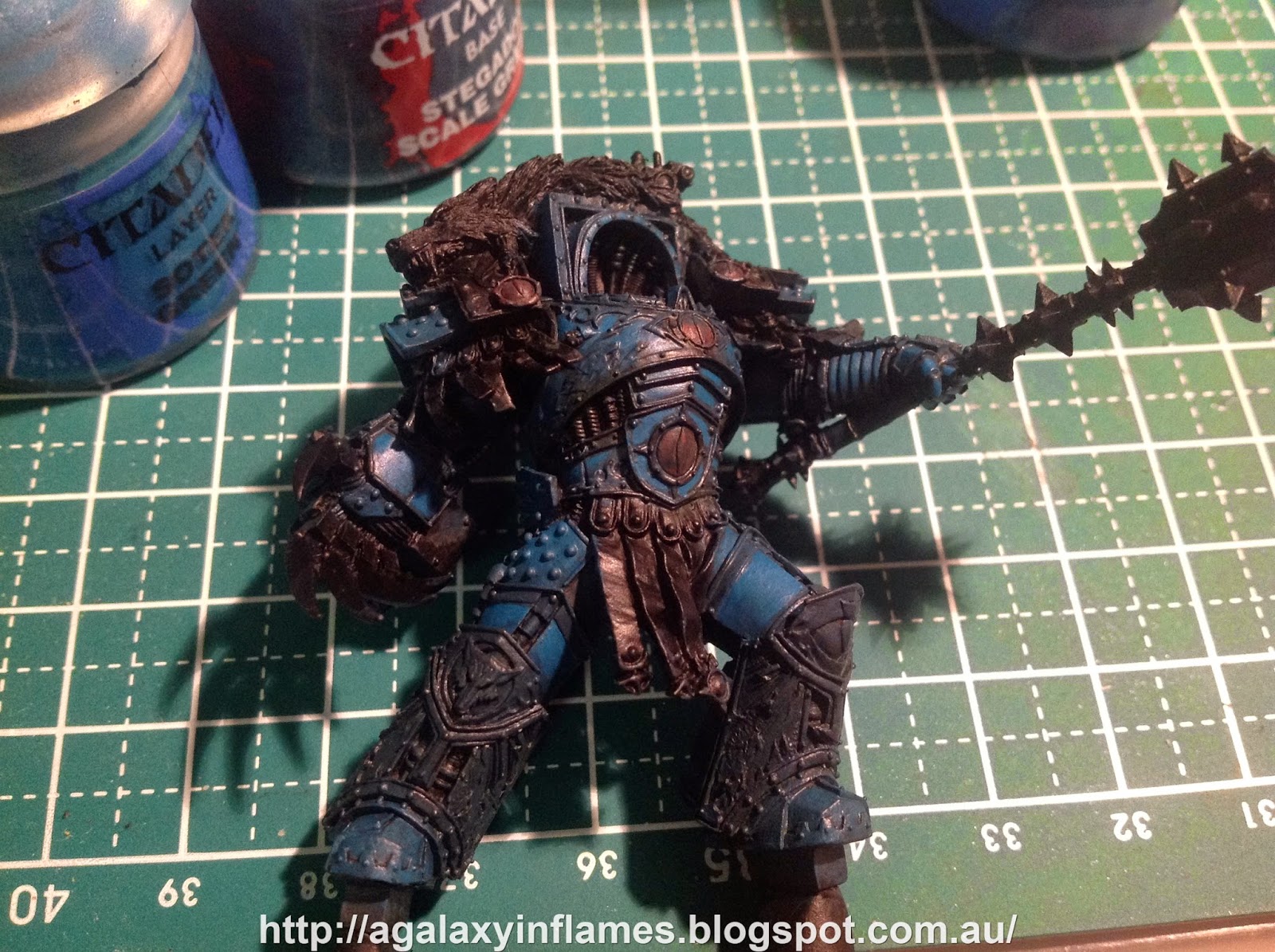 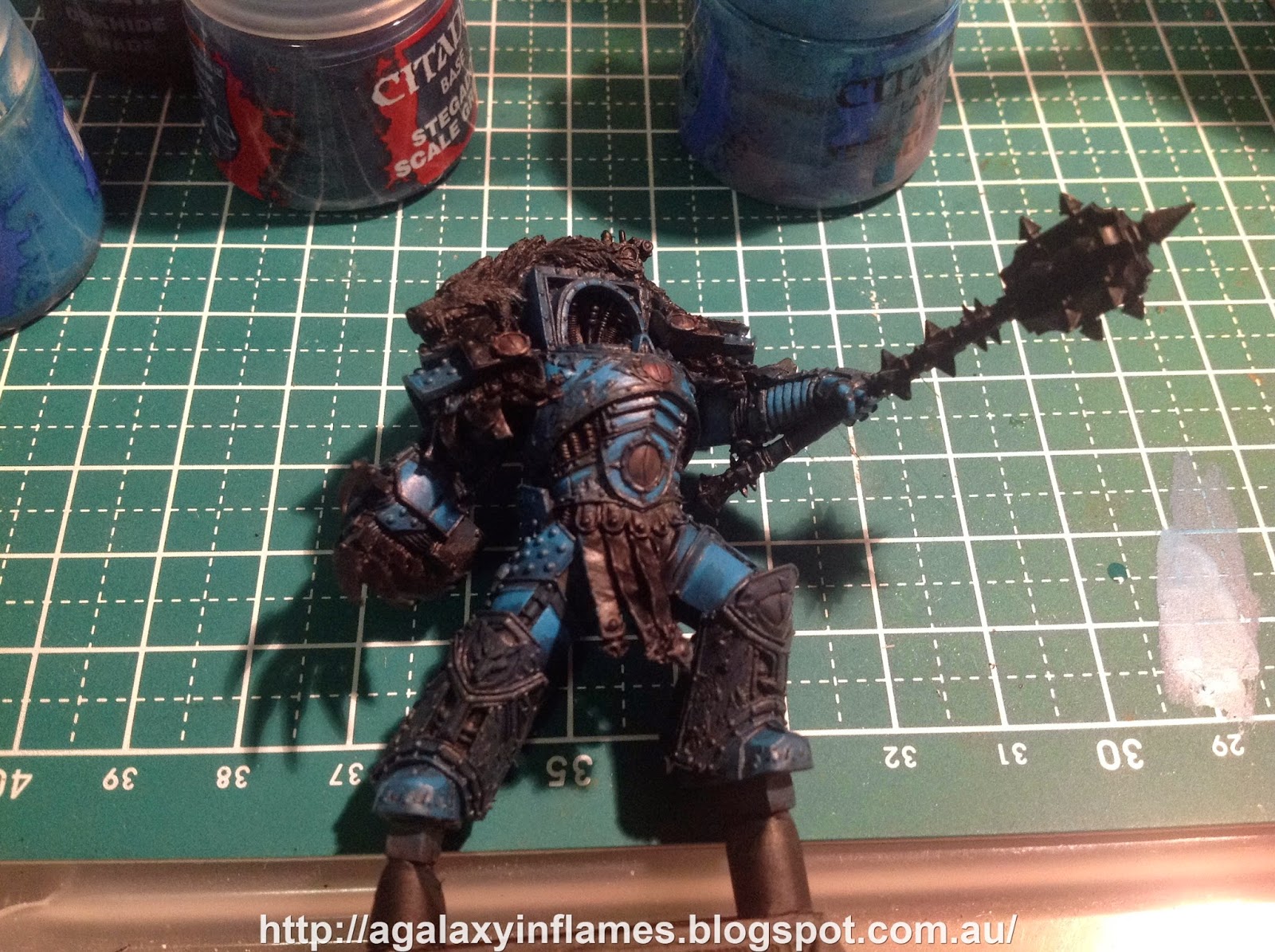 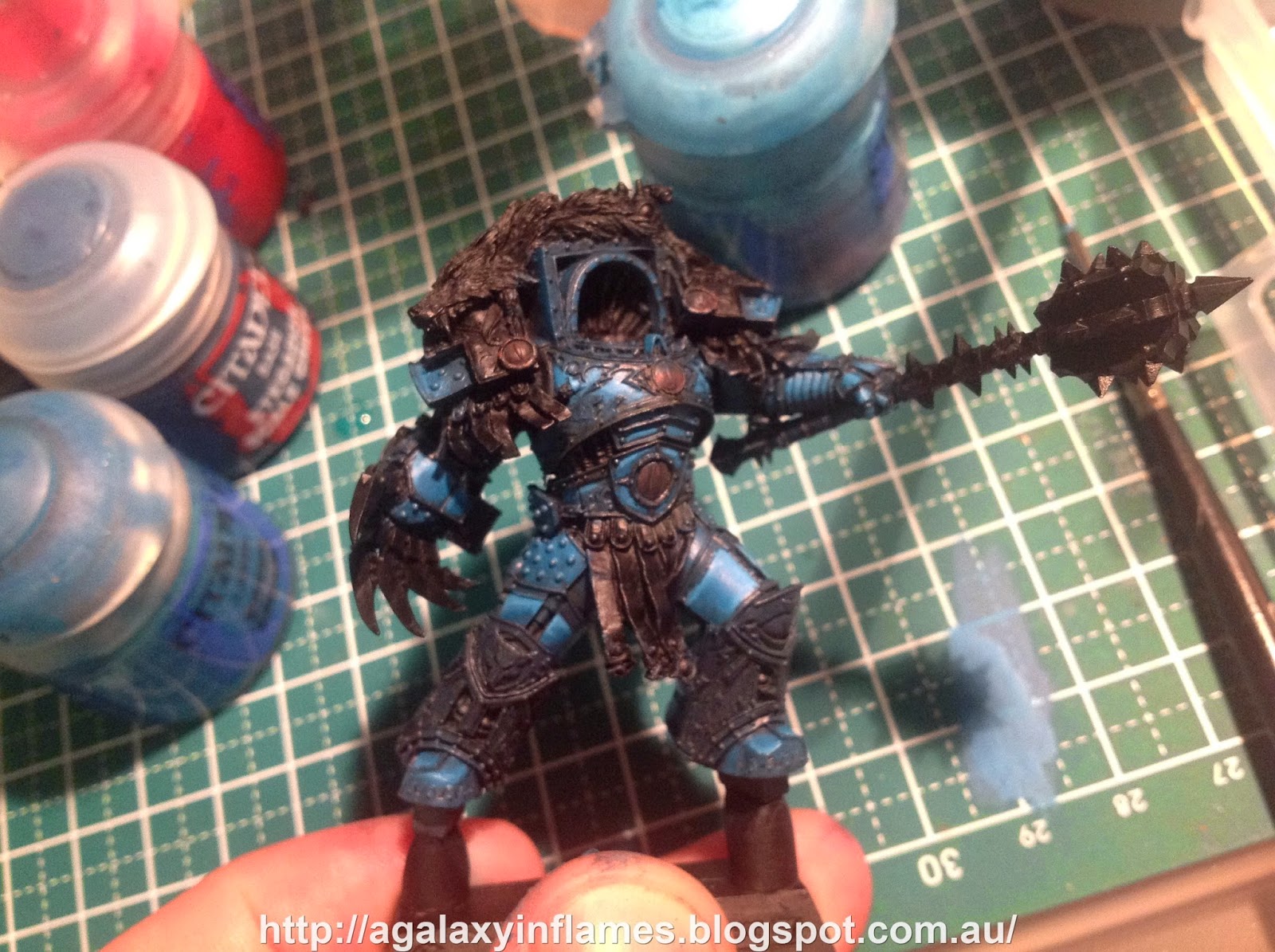 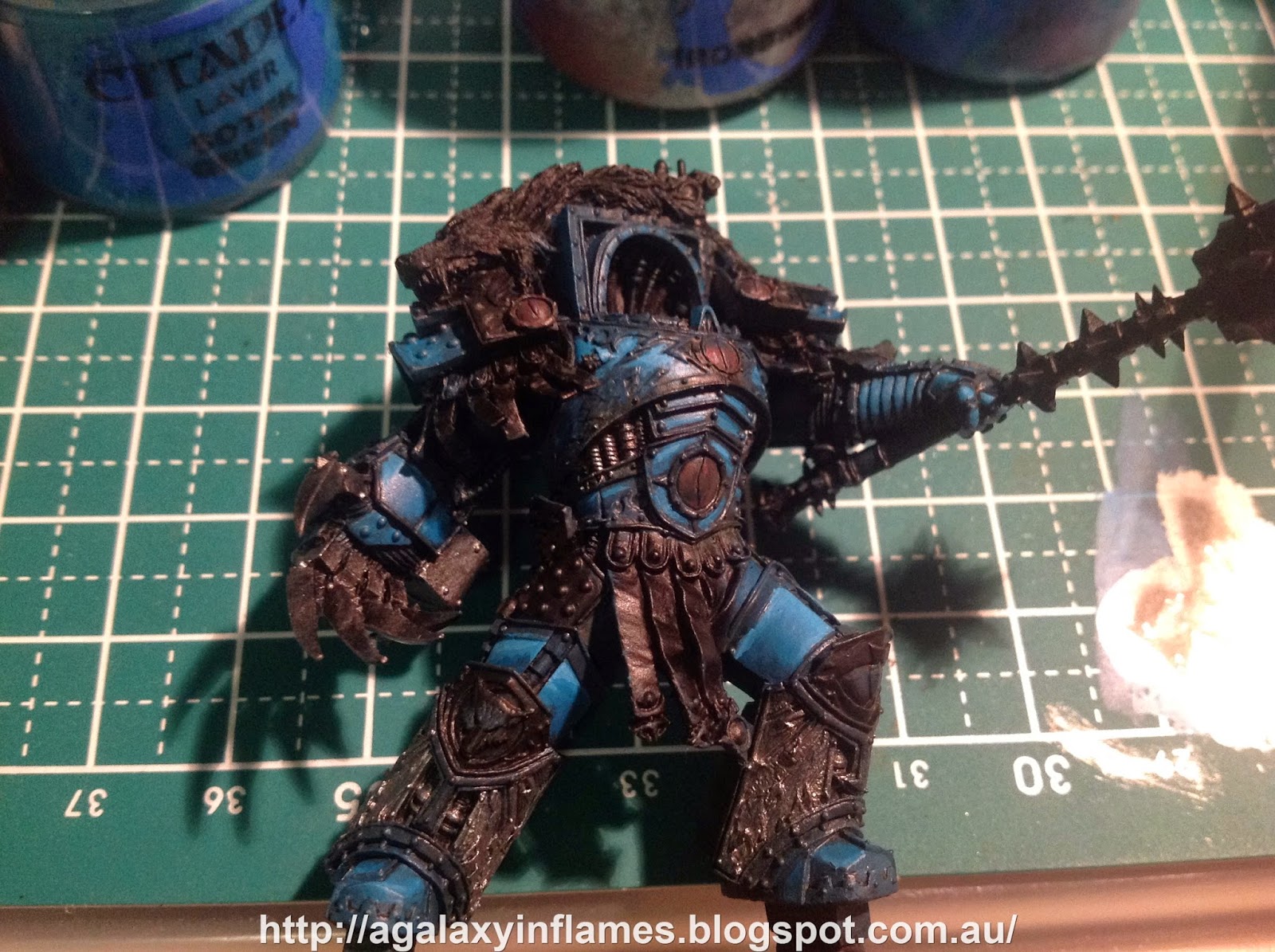 Once the blues/greens were done, I then started my metallics. I applied silver to the shins, as I wanted to treat them like and embossed metal fresco. I then focused on my golds, with both Balthasar Gold and Auric Gold providing me with me rich bronze/golds. 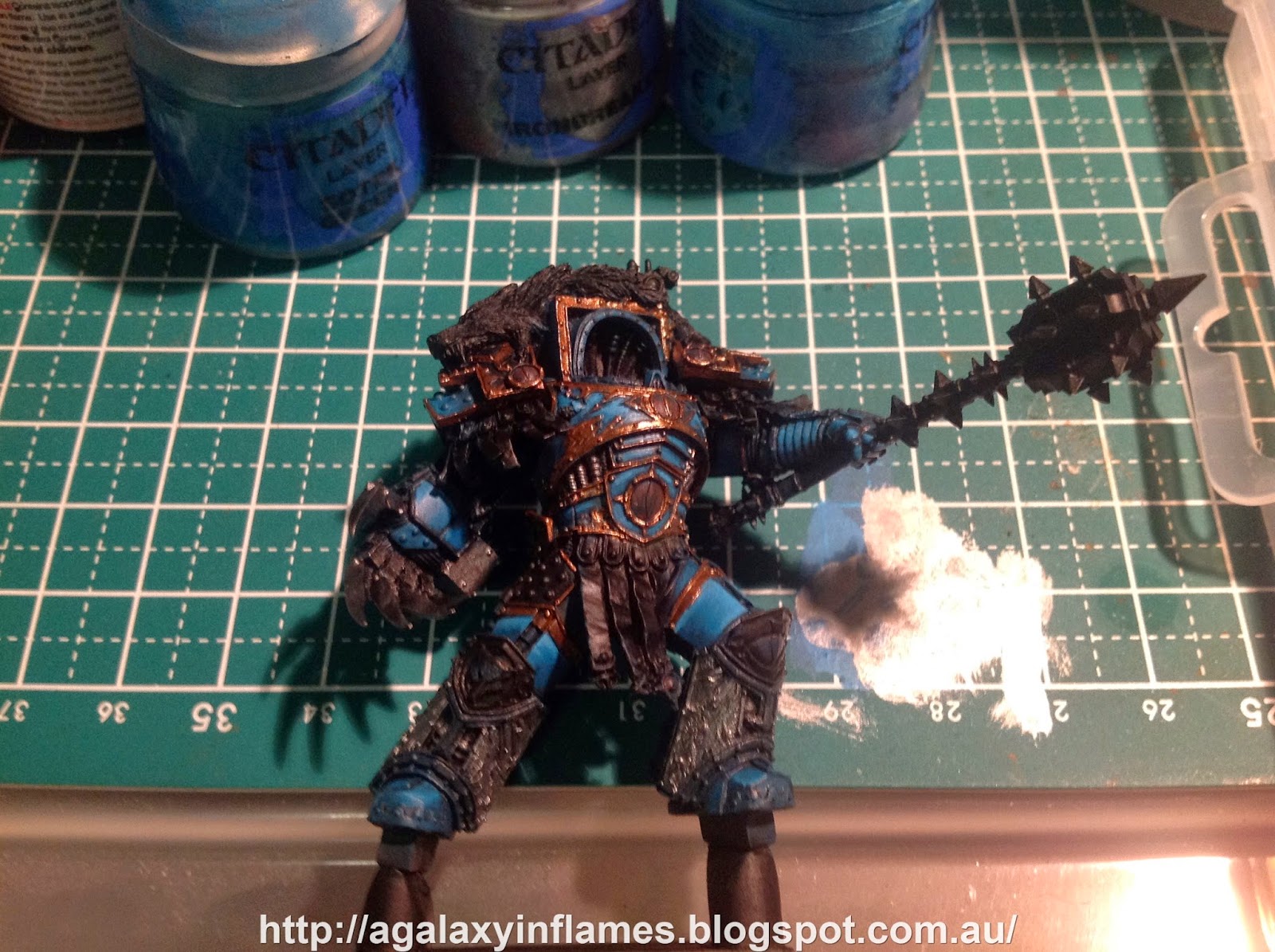 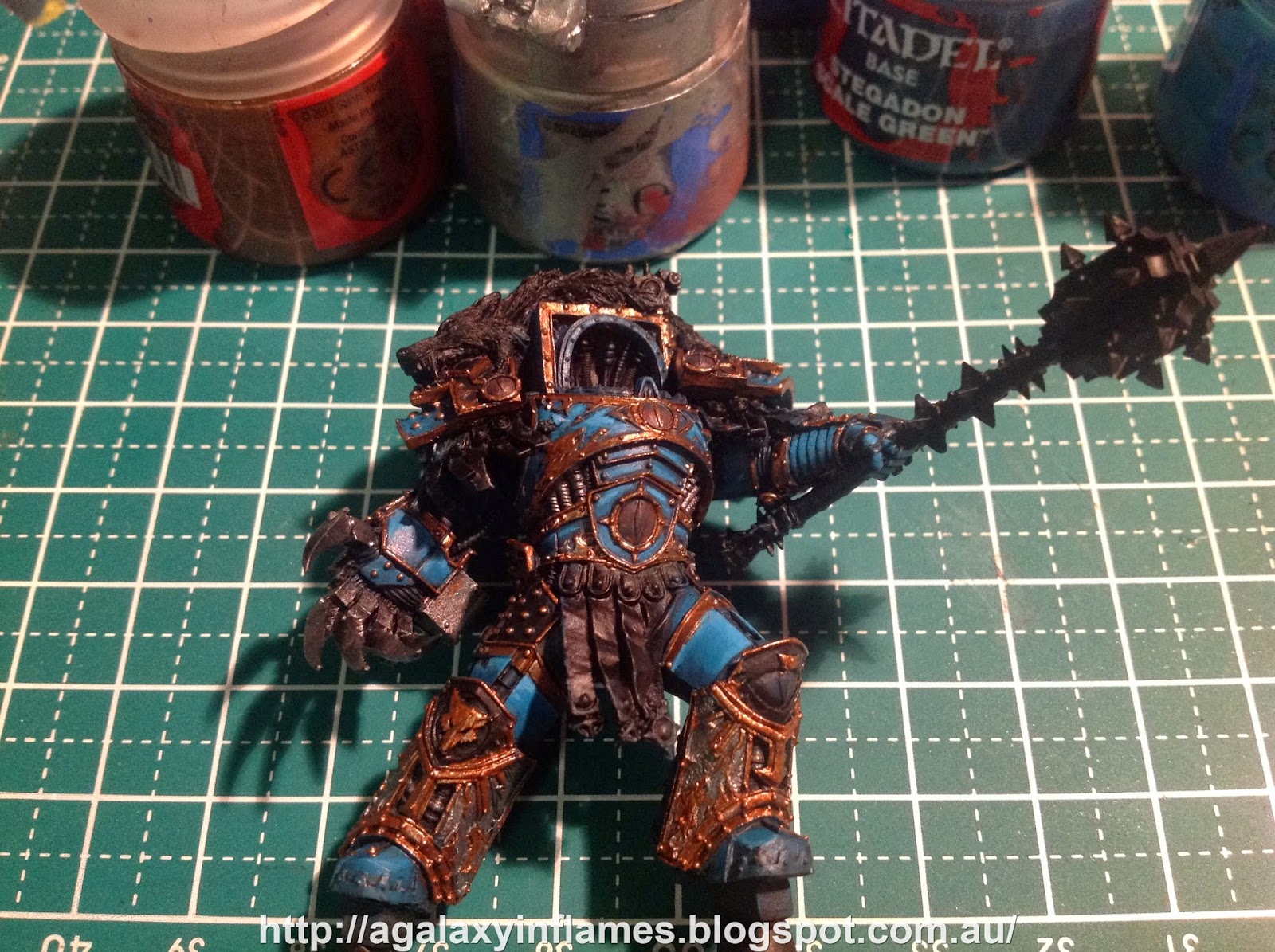 At this point, Horus had his 'eyes' painted. This was a simple wet blend from Wazdakka Red through Evil Sunz Scarlett, Blazing Orange and finally Sunburst Yellow (yes,I have paints from like 2002 and some still work. Best one is Mithril Silver. Also, Keepy has a bunch of Chessnut Ink which I think he's saving to go on Antiques Roadshow when they mature). 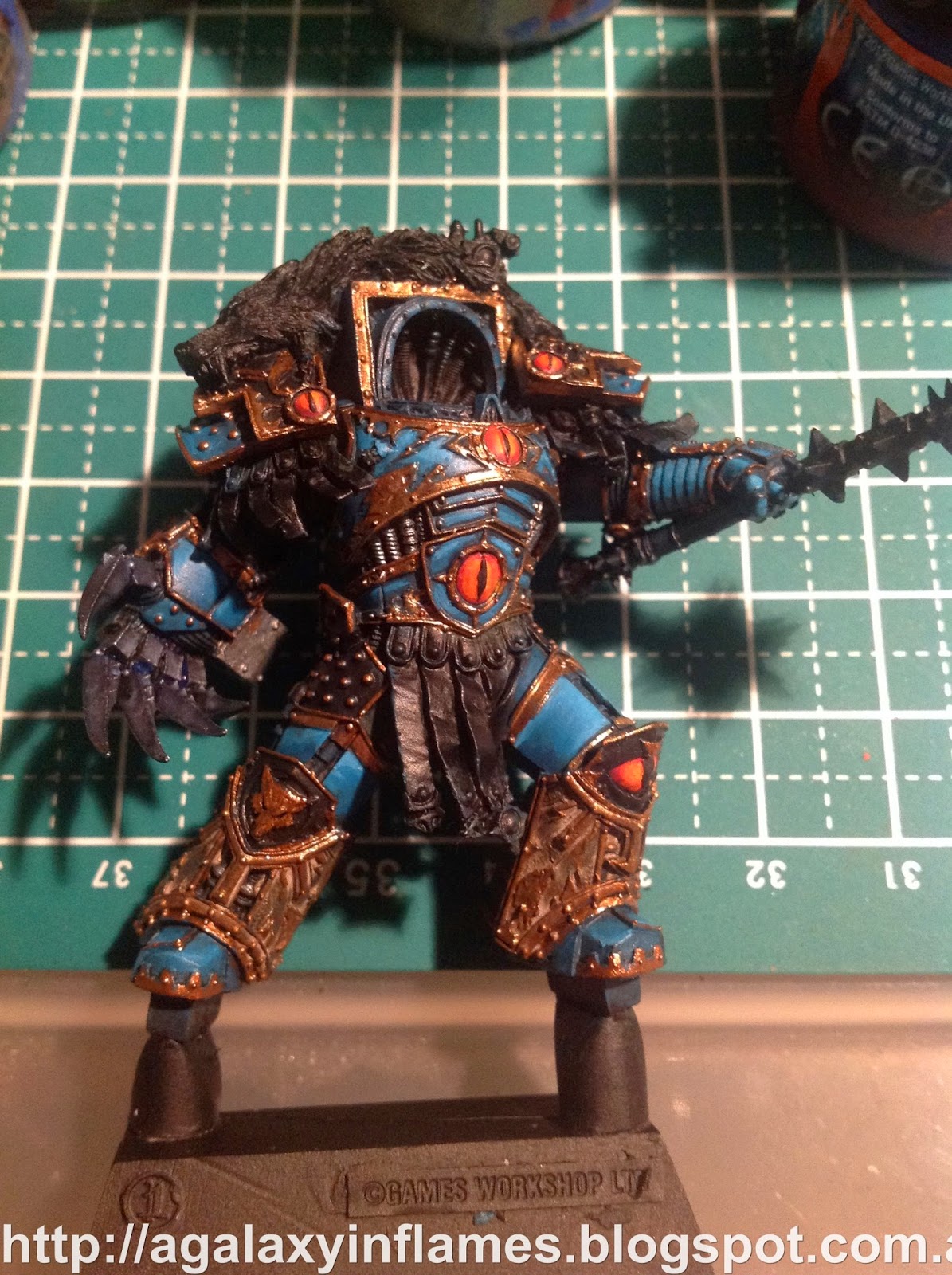 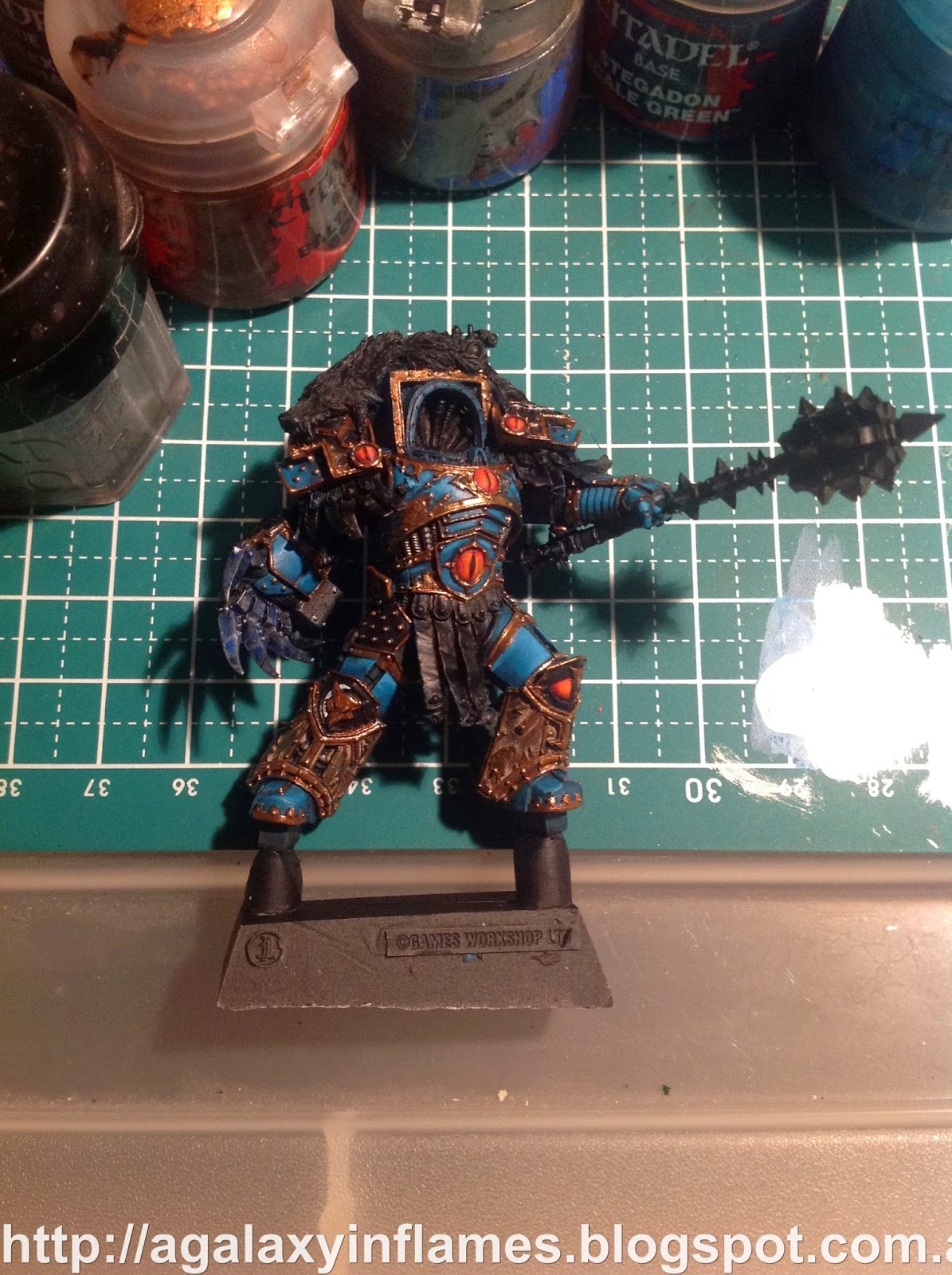 So, at this point, I applied a base of Wazdakka Red on the Pturges (red flappy leather straps). Of course, people at this point saw some of my WIP shots and decided they didn't like blue Horus. Maybe it was really Alpharius, who knows? However, I will let you in on the choice, I chose blues as greens are hard to dilute and highlight without them turning grey. Thus, I stuck with blues which were not far removed from greens, and applied two or three very thin washes of Thraka Green. This then gave me the lovely rich Sons of Horus green I sought. 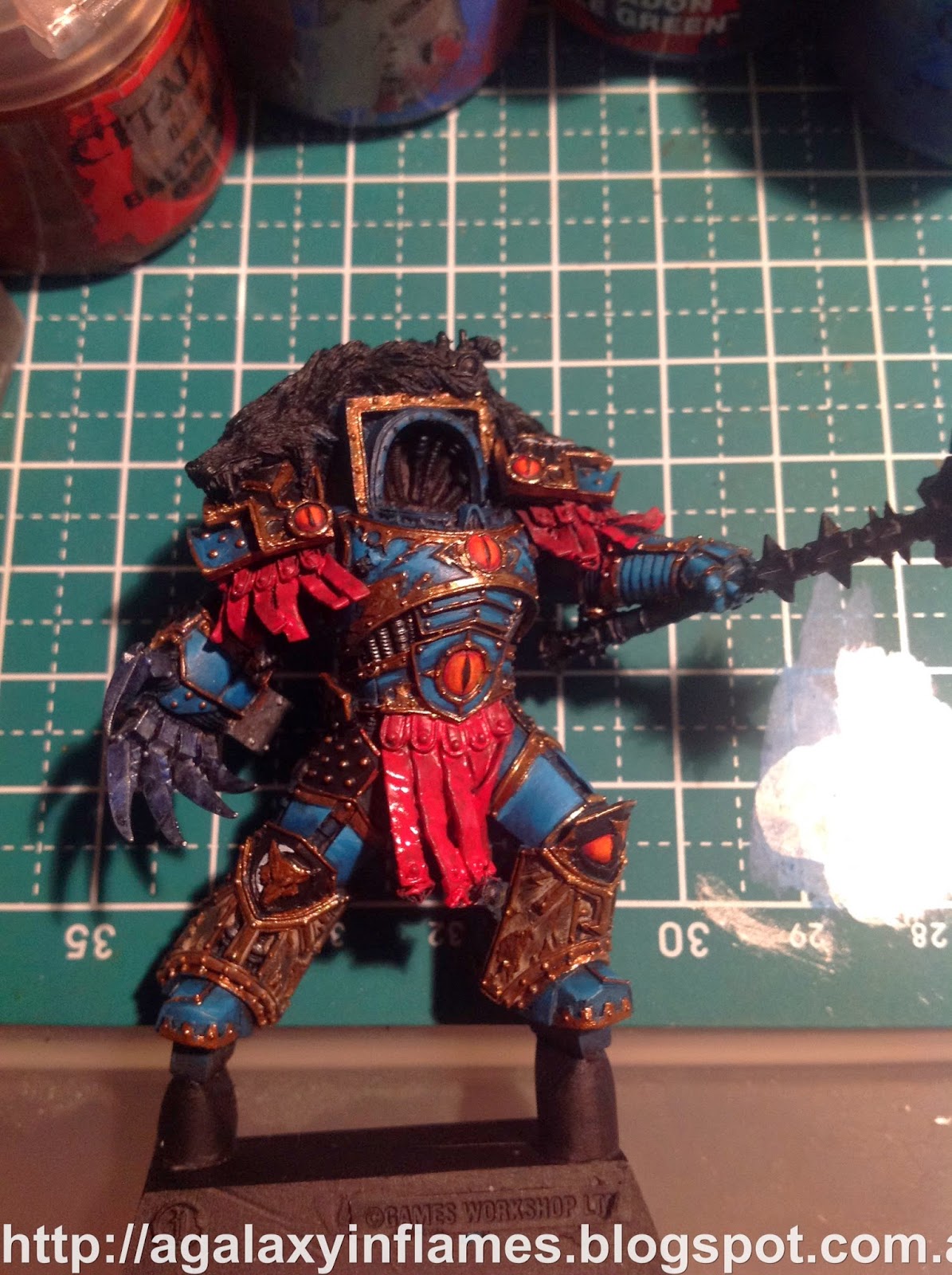 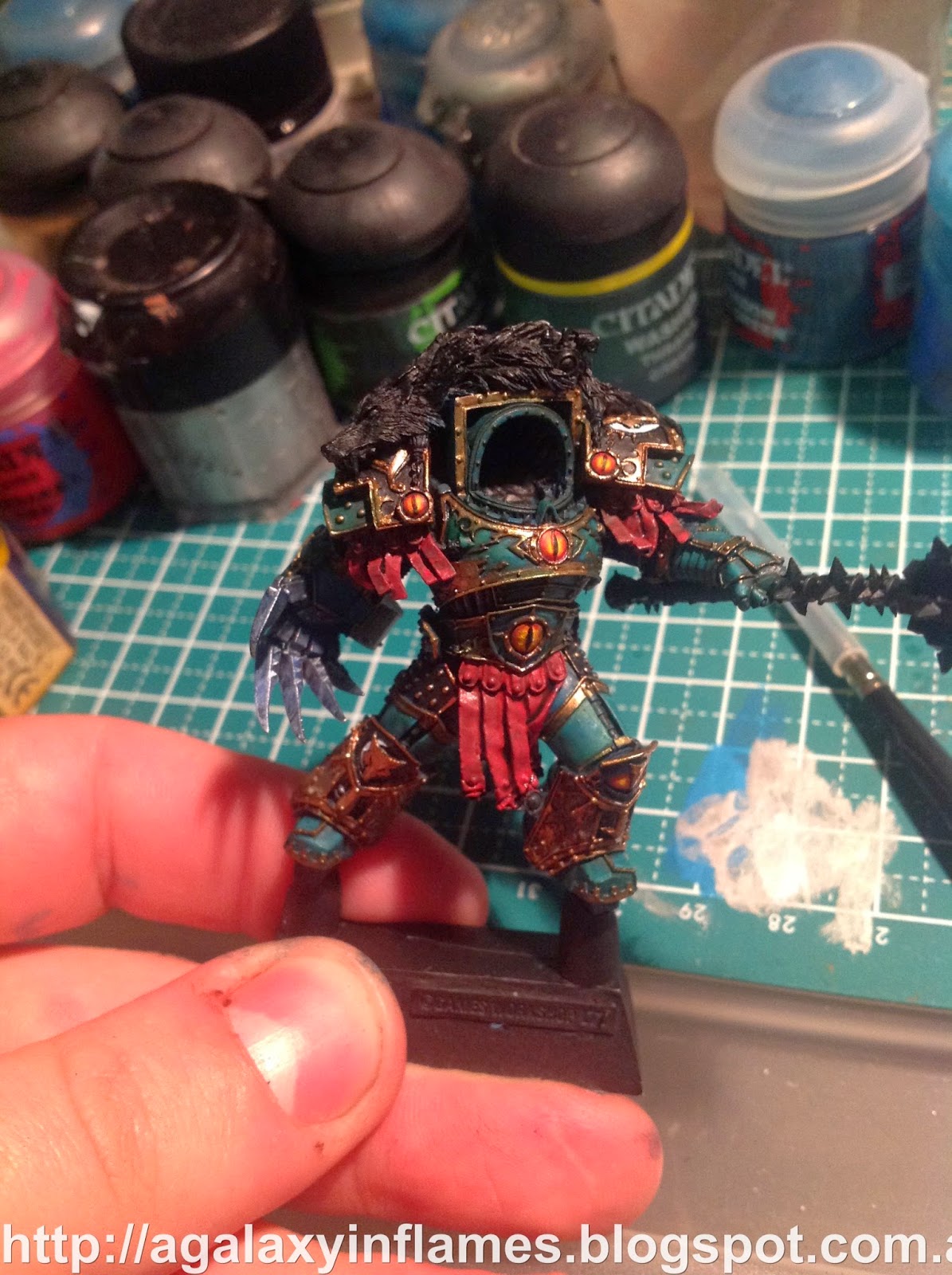 From here, I then used the same red highlighting I used on the eyes, without going any further then a 50/50 mix of Evil Sunz and Blazing Orange. This now gave me strong highlights on the Pturges. 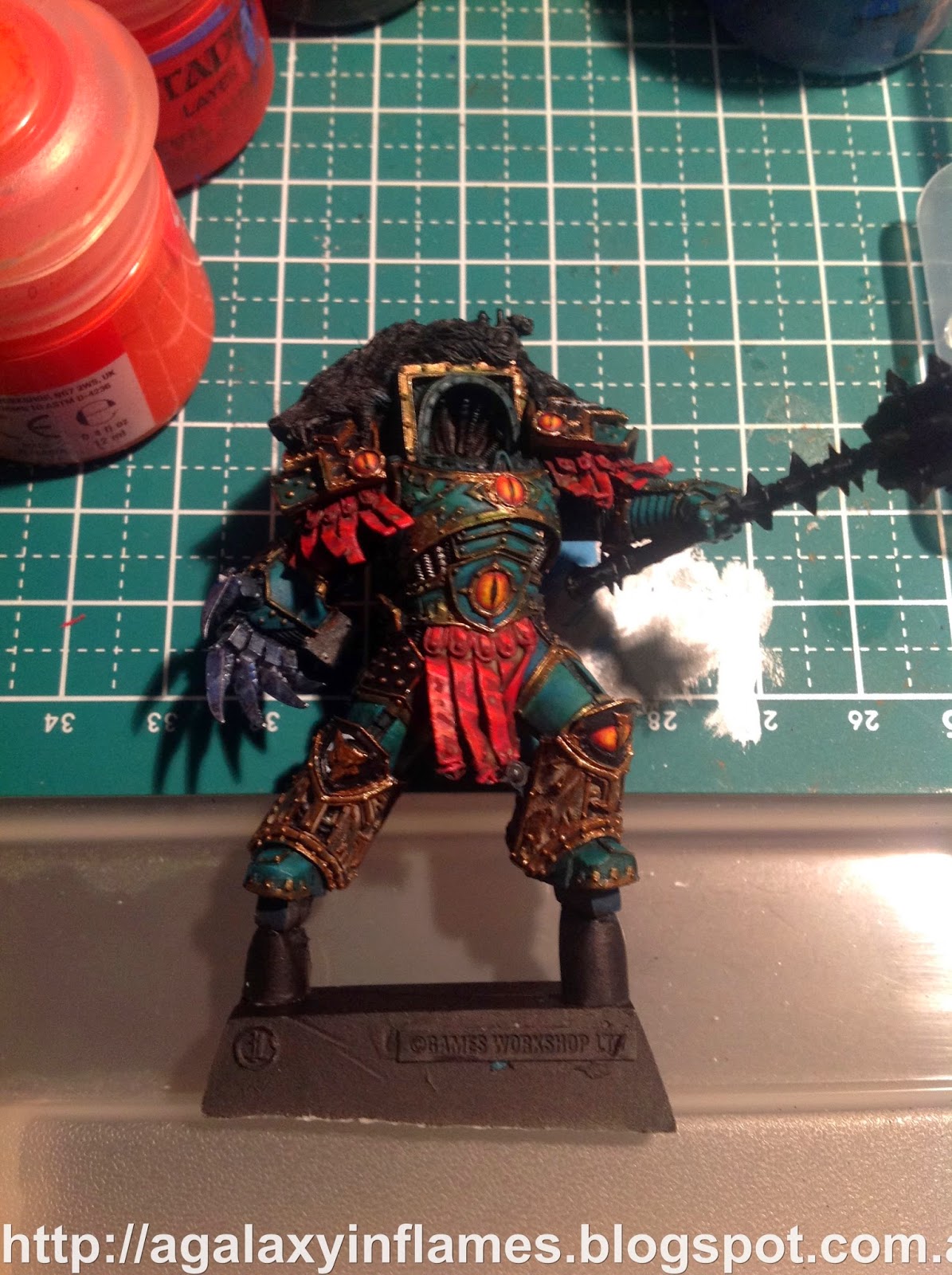 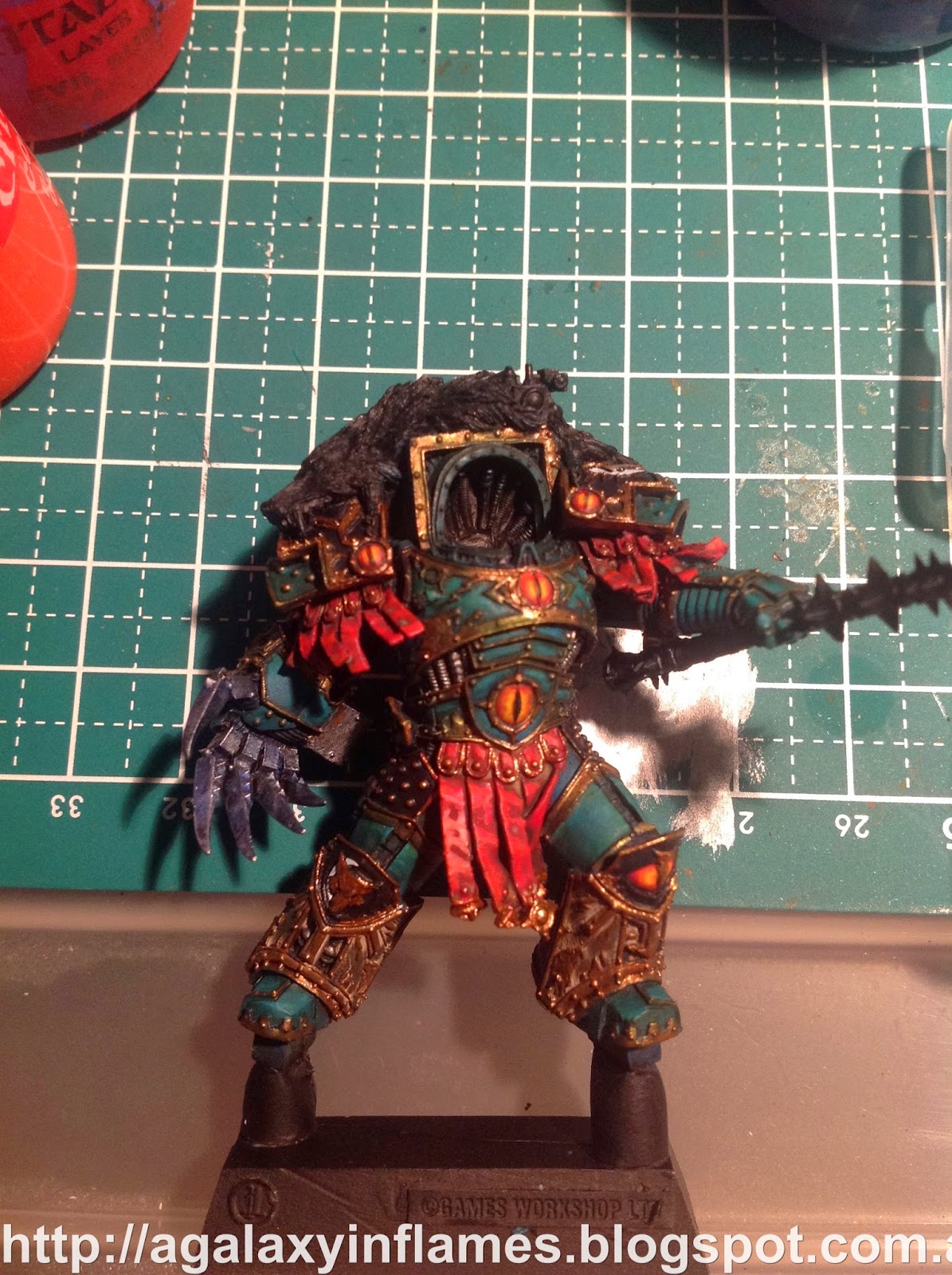 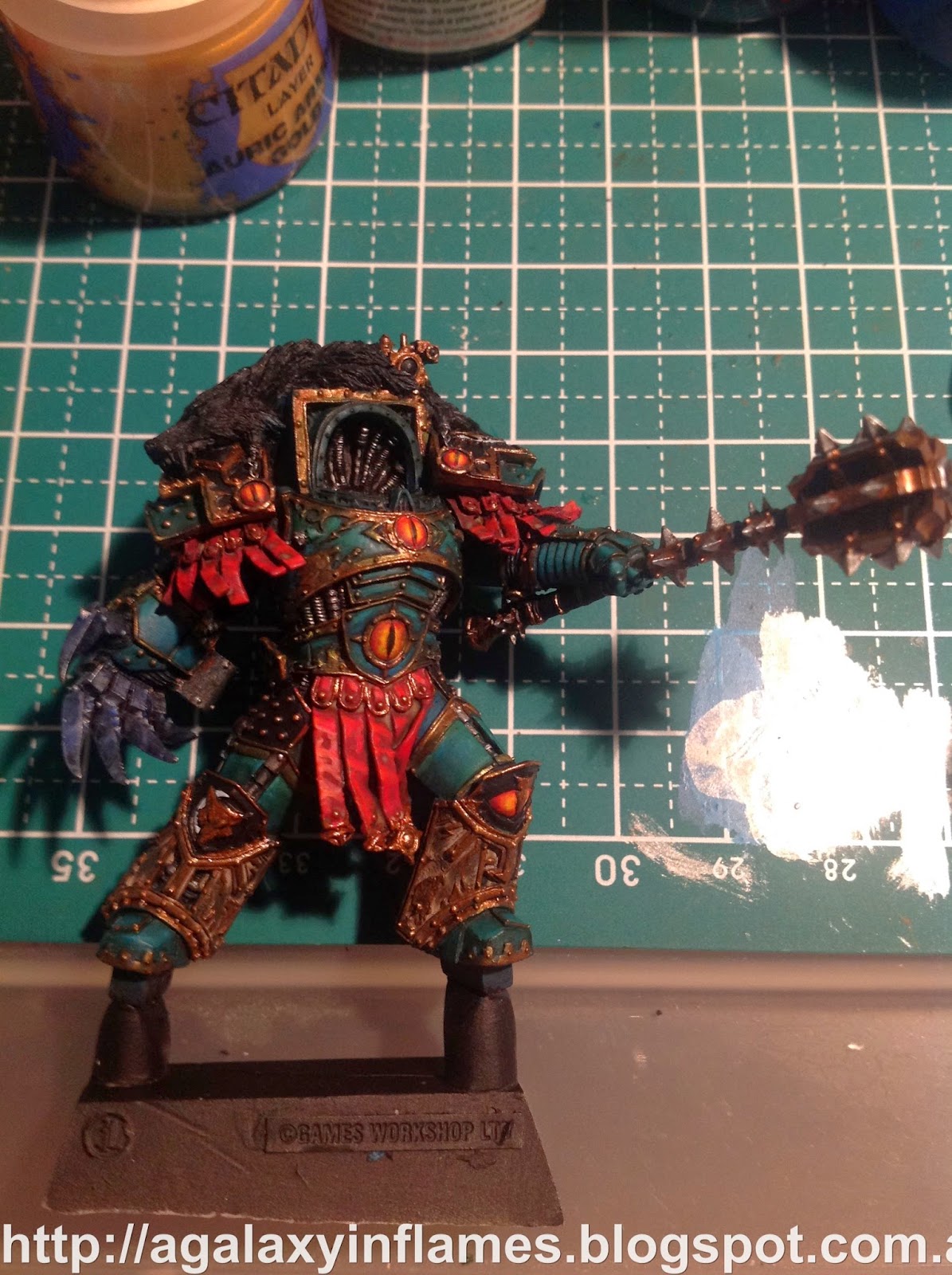 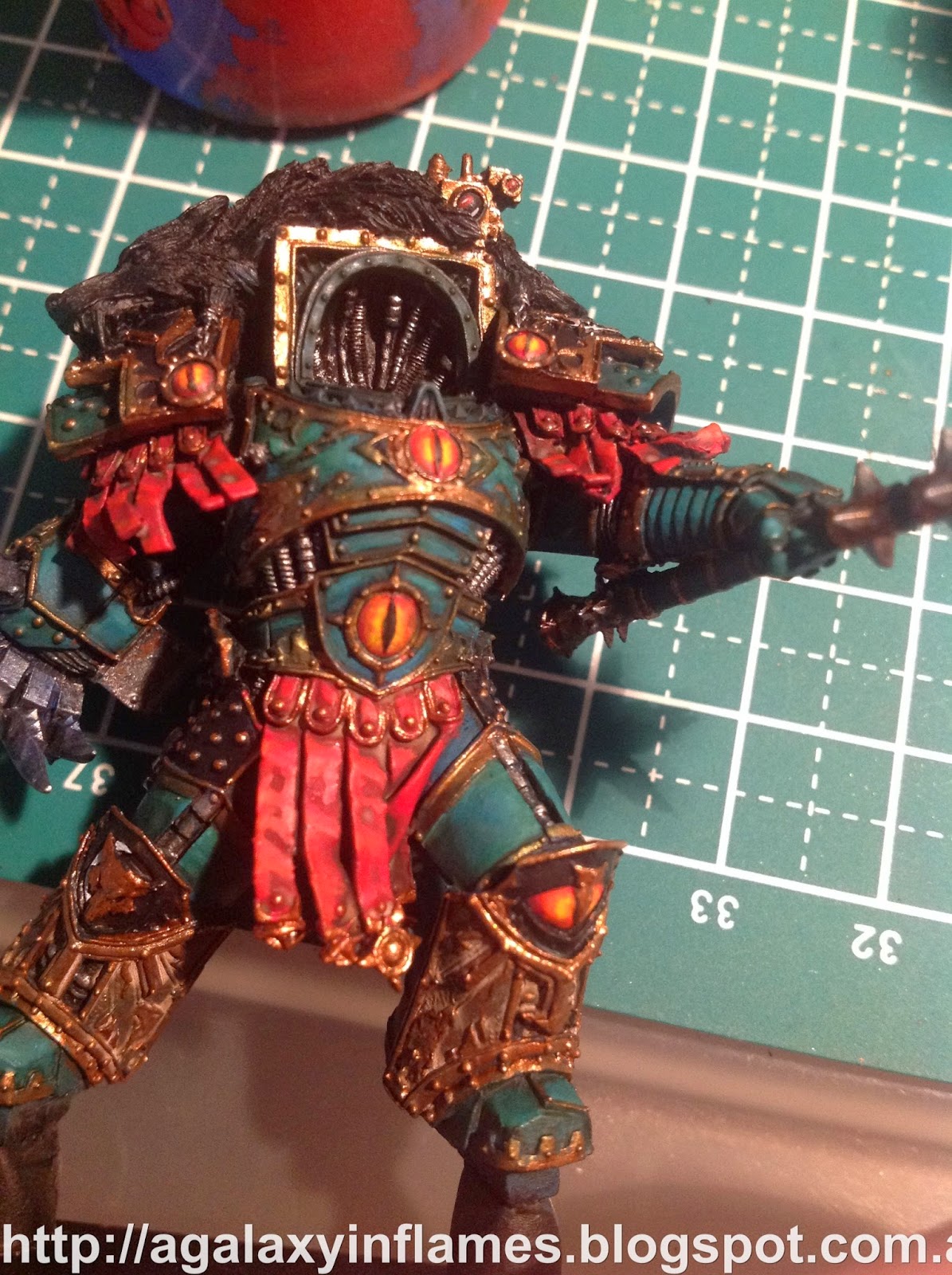 So, that's it for part one, be sure to tune in for part two, as I cover the marble base, his face and cloak. I'm afraid you'll have to wait until part 3 to see the finished model however.

Thanks for sticking with me, Macca.
Posted by Unknown at 19:14