Well, here we are, part 2! For those who are looking for a top notch paint job here.... unless you like undercoat, you're gonna be really disappointed. Today is all about magnets and bases.

So, last night, this is where I got to. I spent about 4 hours building and prepping these models, and with a commission job on the go, I have to devote most of my time to that. 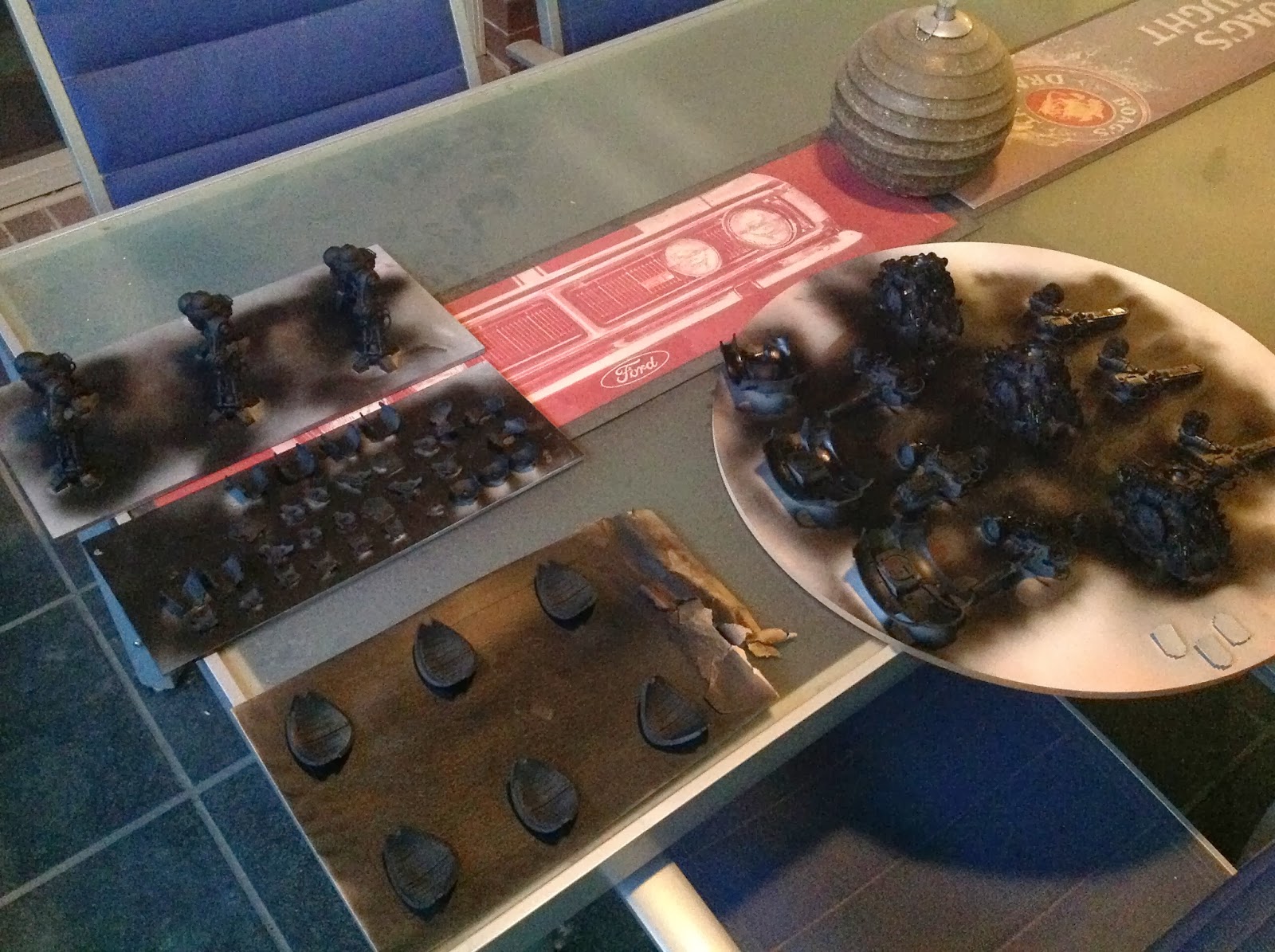 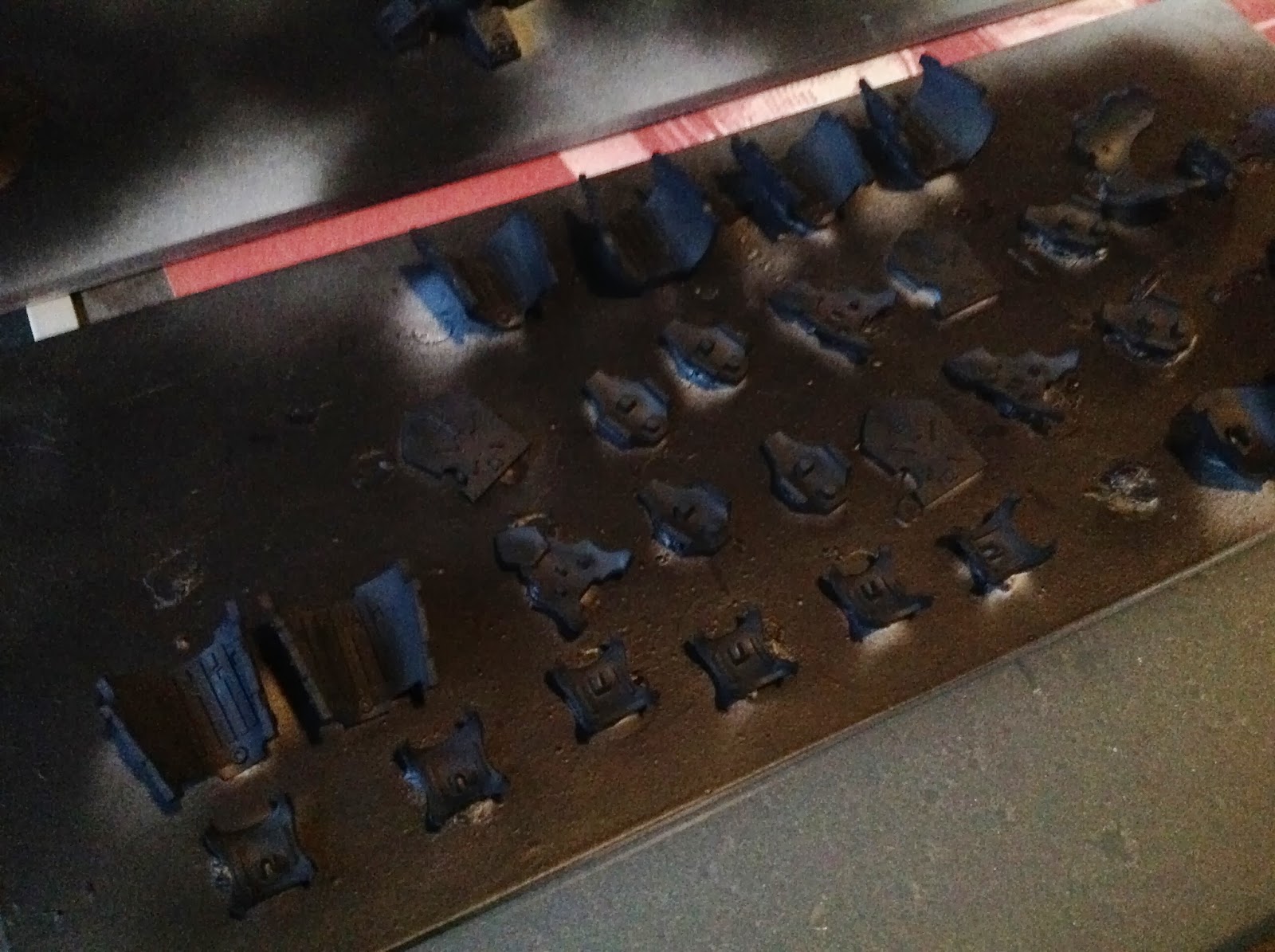 Well, that was last night. This morning, I got up with a new idea. I wanted to magnetize the Knights, so I could more easily assemble the models, base the models and transport them. When I looked at the feet, the toes were a tiny bot too small for the 10mm rare earth magnets I chose. That said, with a quick slice, I cut the rear of the toe enough for the magnet to slide in. I then used a putty to fill the toe, put a droplet of super glue on, and squashed the magnet into place. This is so there is a heap of surface area, as the magnets are quite strong and I don't want them tearing out when I remove the model. 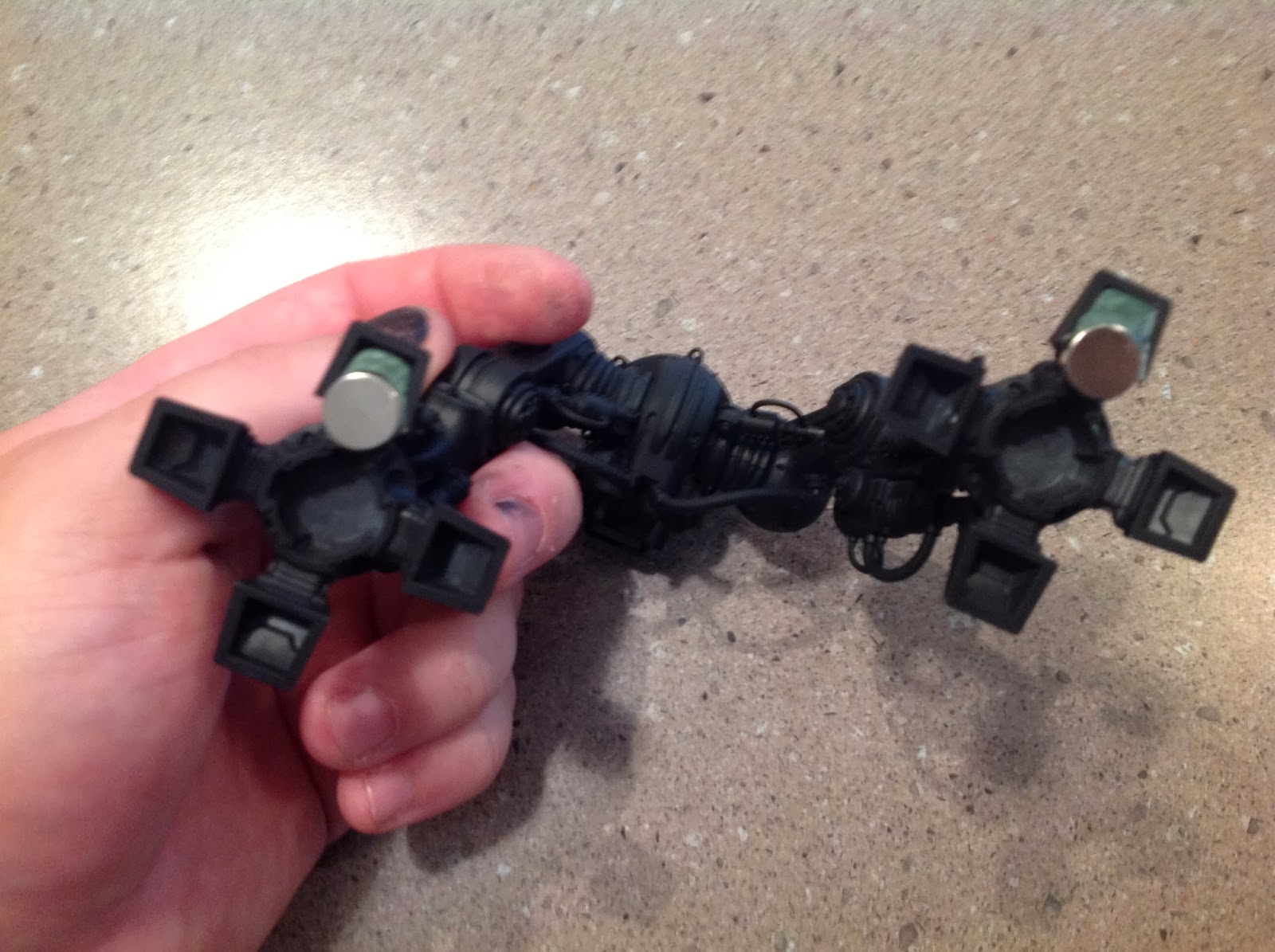 .....and on the plus side, you can hardly even notice them unless you look really, really hard. 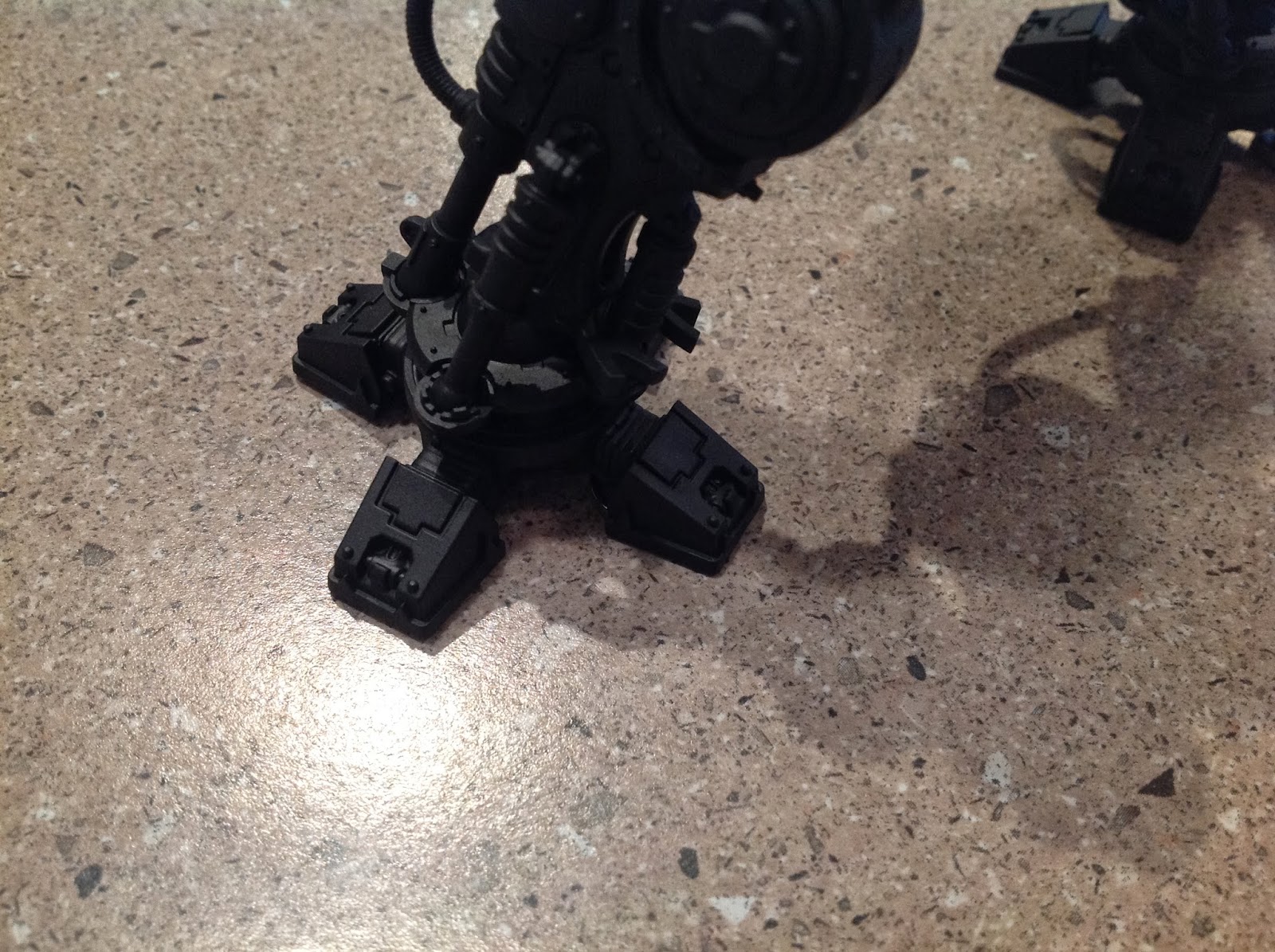 I then placed a couple of droplets of super glue onto the underside of the base where I wanted the magnets, then holding the knight upside down with the knight resting on it, I just let the magnets drop into place. Their own polarity ensured that they would end in the correct position. Simple. 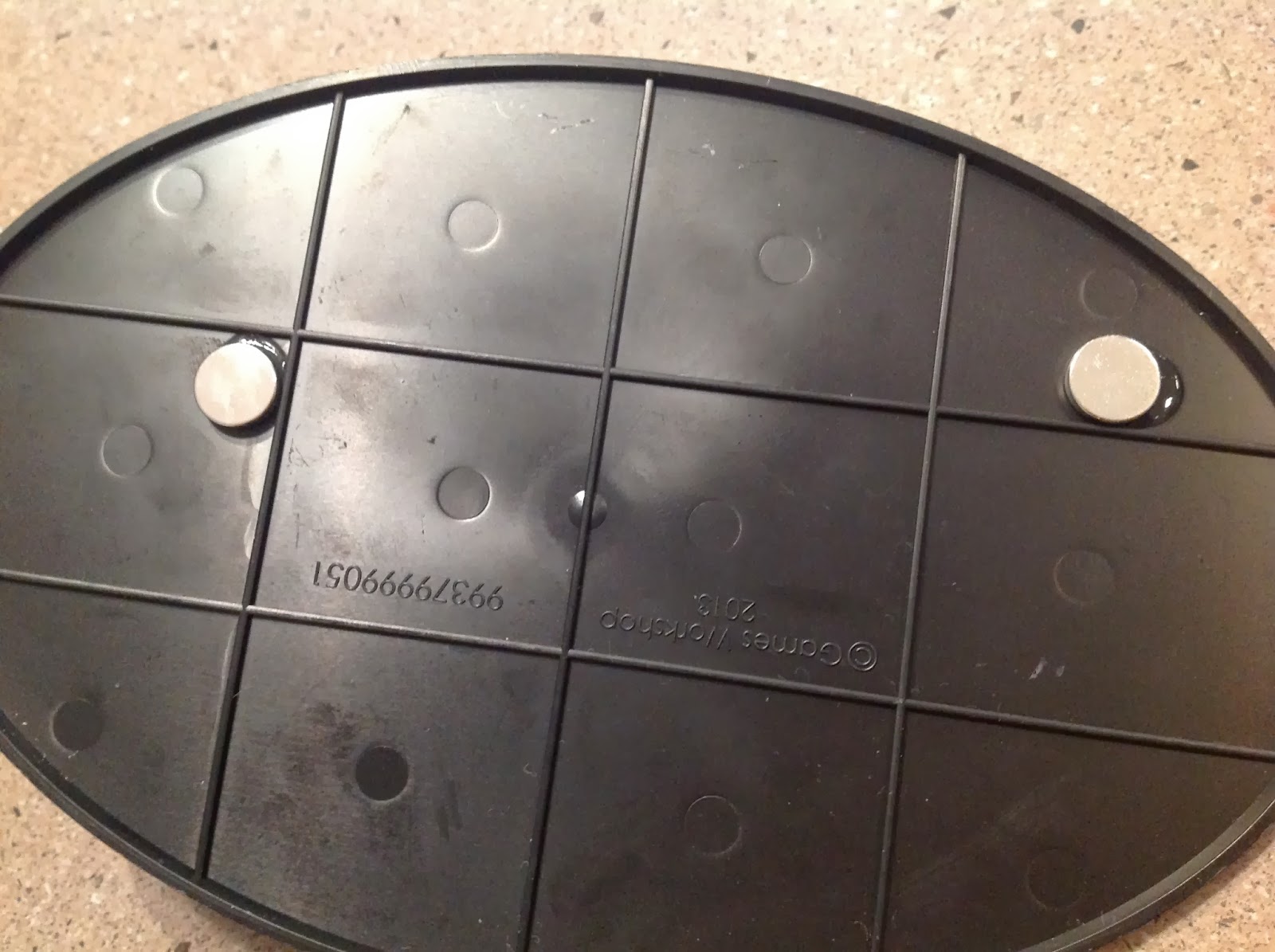 Ok, so now onto the bases. These bases are huge. They are about 50% as large again as a flier base, and so there is a lot of base to cover. This isn't a bad thing, but I want to share a few of what I perceive as the 'finer points of basing'. First, it's a base, not the centerpiece. That's what your model is for. Unless you're entering a golden daemon, you don't need a 50mm thick black display plinth, with 400 Nid' corpses and a single Ultramarine standing on top. Instead, try to tell a story with the base, keep it simple, and leave subtle details, so those looking at it will notice them only on their second or third passes.

So, with this in mind, I have chosen a theme: Chaos barricades. I have chosen some small walls from the cityfight terrain kit, and a few pipes. I have then used etched brass and a few marine bits throughout. The first base is quite 'clean', and contains only a few little bits, such as the plate the Knight is stepping onto on the right hand side. 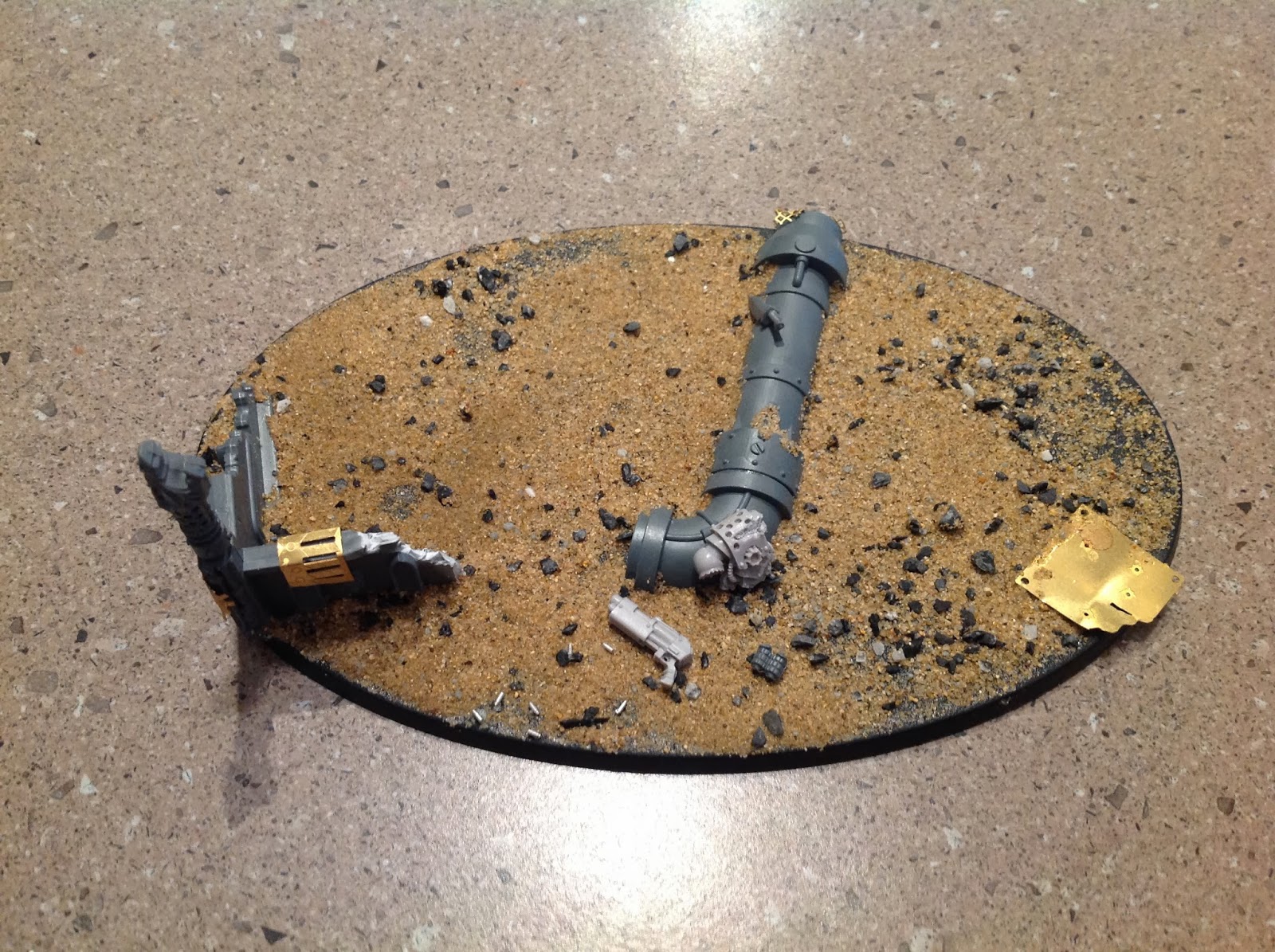 Here we have a small brass plate on the wall that has been wrapped around, as possibly extra defence. To the direct front of the base, is an Astartes shotgun, a few spent casings, some grenades and a damaged pack. This is supposed to represent that someone has used this location for a last stand on some kind. 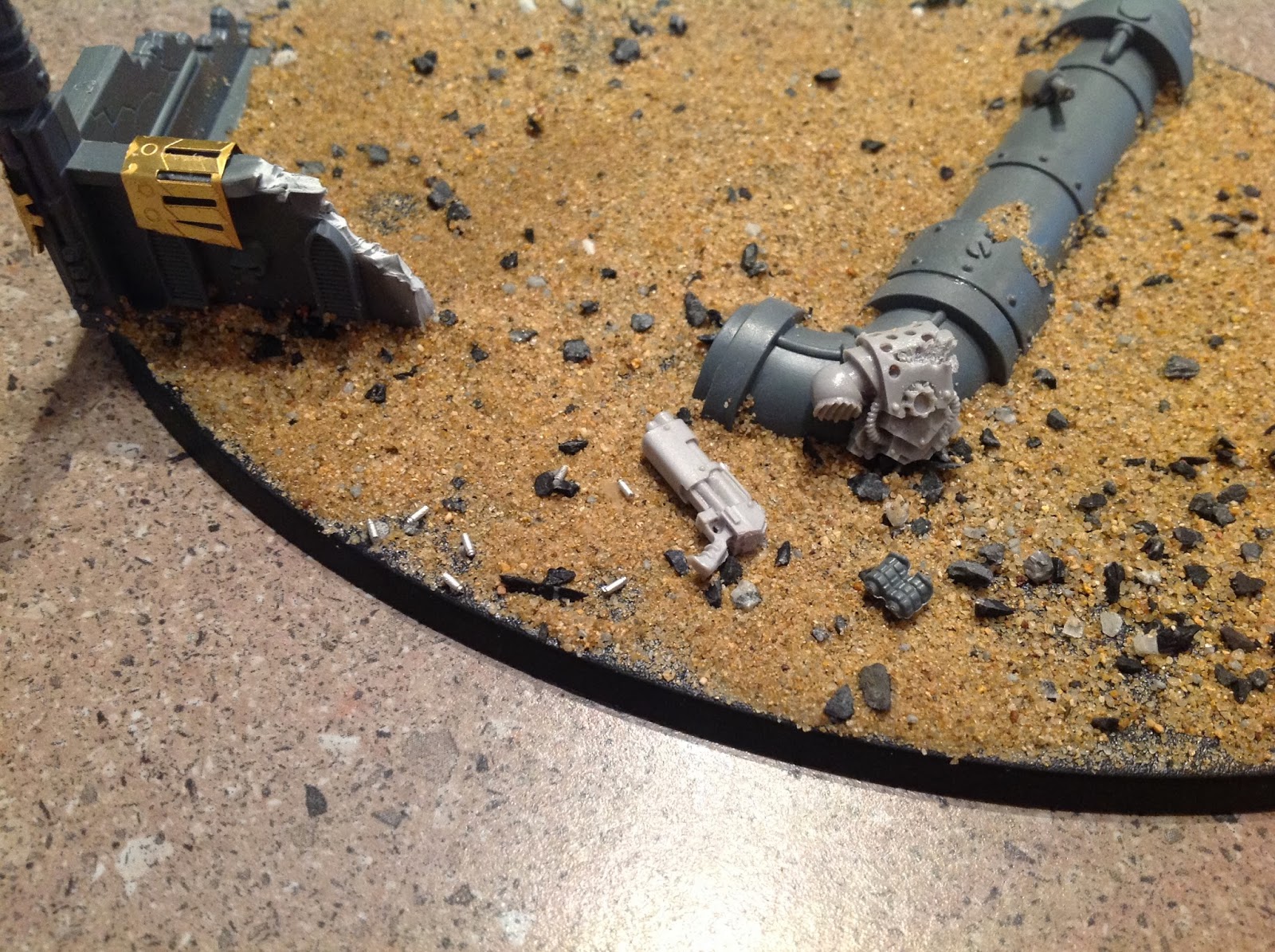 The rear of the base has the pipe with an end meshed off, and an old 2nd ed combat knife resting against the pipe. 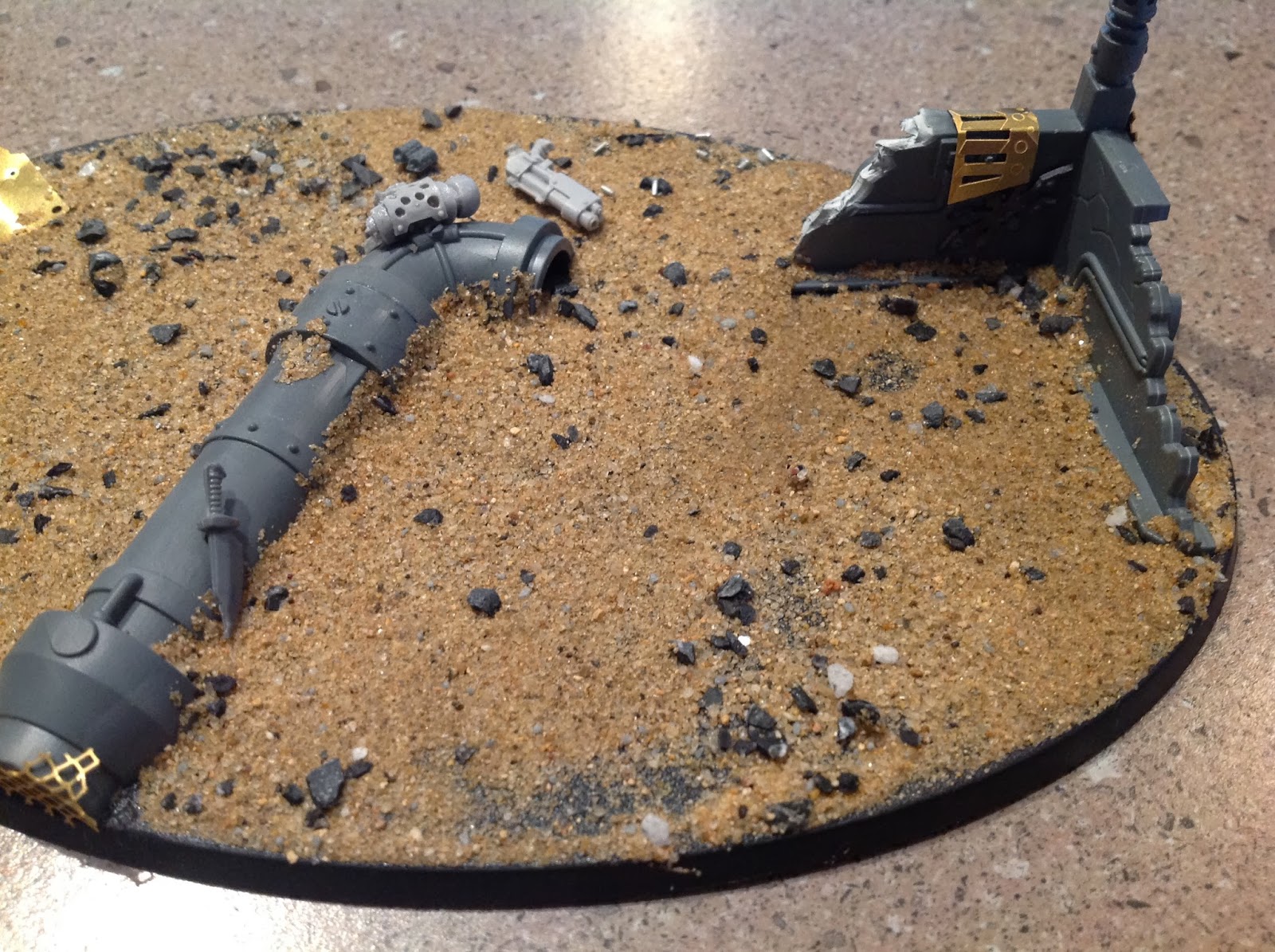 Base 2 is much more extreme chaos. It has trophy racks, and a few helmets. 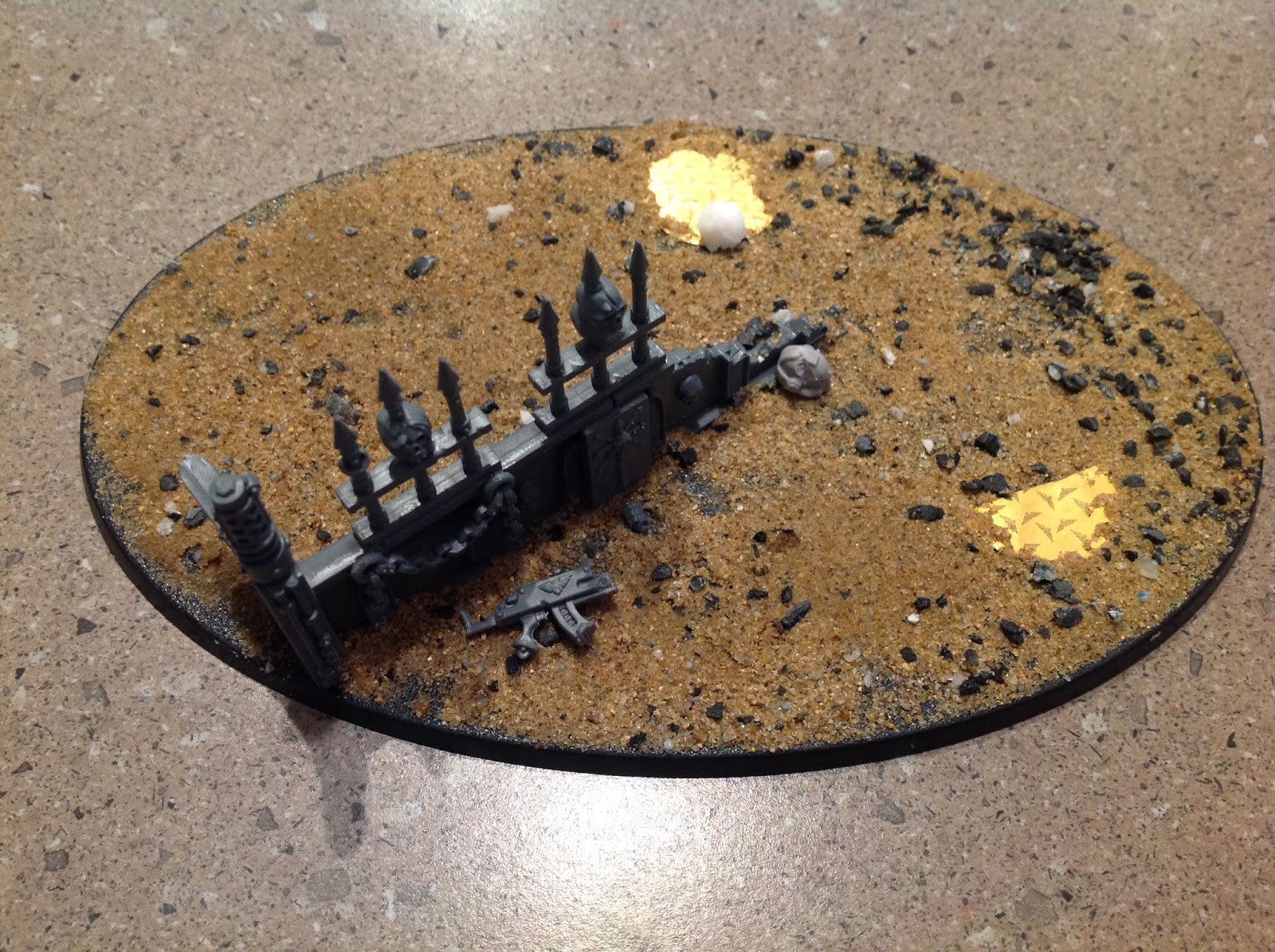 Up close, you first see the trophy racks, these draw your attention. As you get close, you now notice the bolter (again, a 2nd ed one from my bits box), and a grenade. you see that at some point, this was possibly a chaos building, but it's now just a ruin beneath the Knights feet. 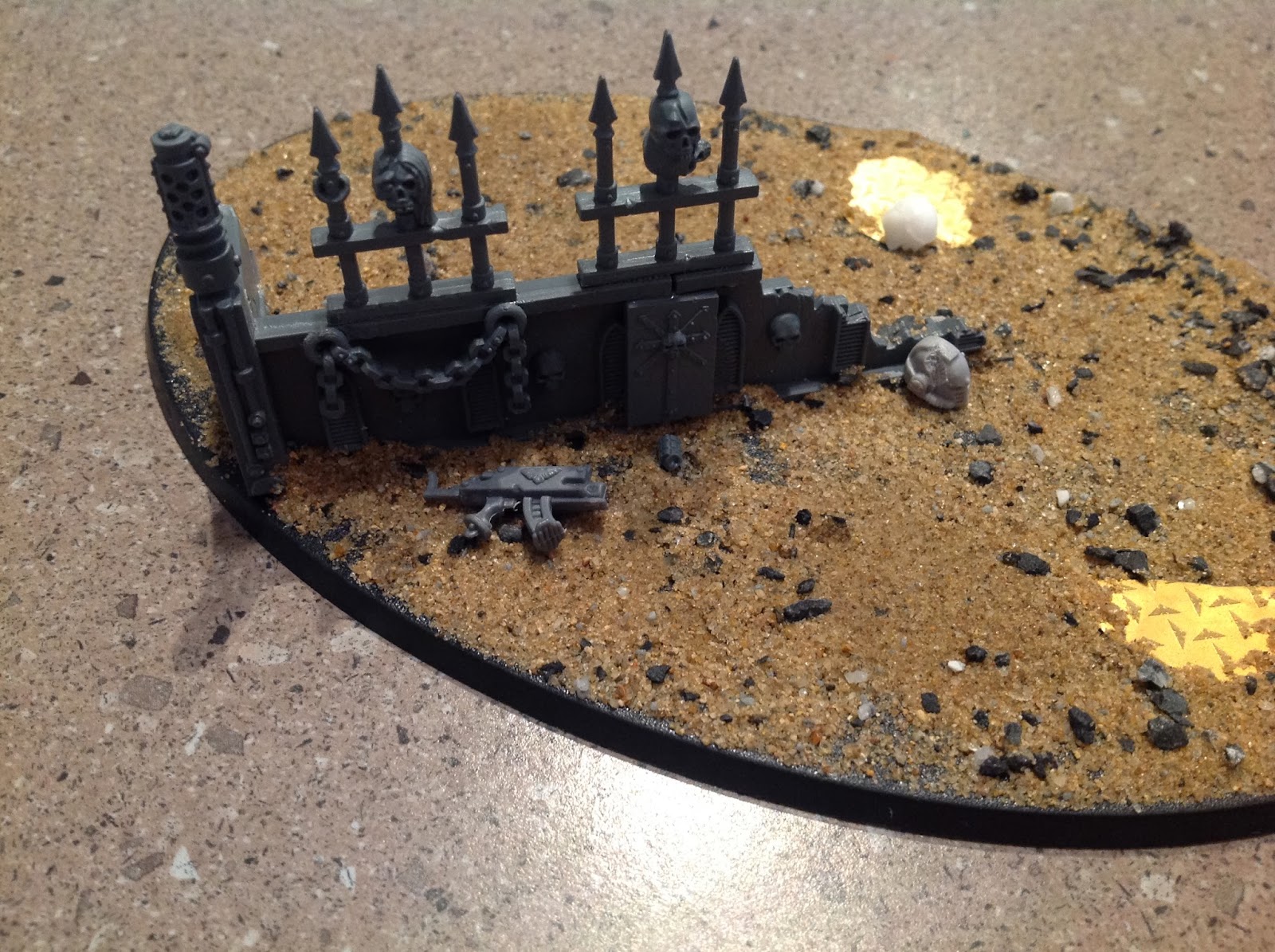 I like to add a few gimmicks into my bases, in the case of these bases, there are hidden chaos symbols, in this case, a Khorne one. 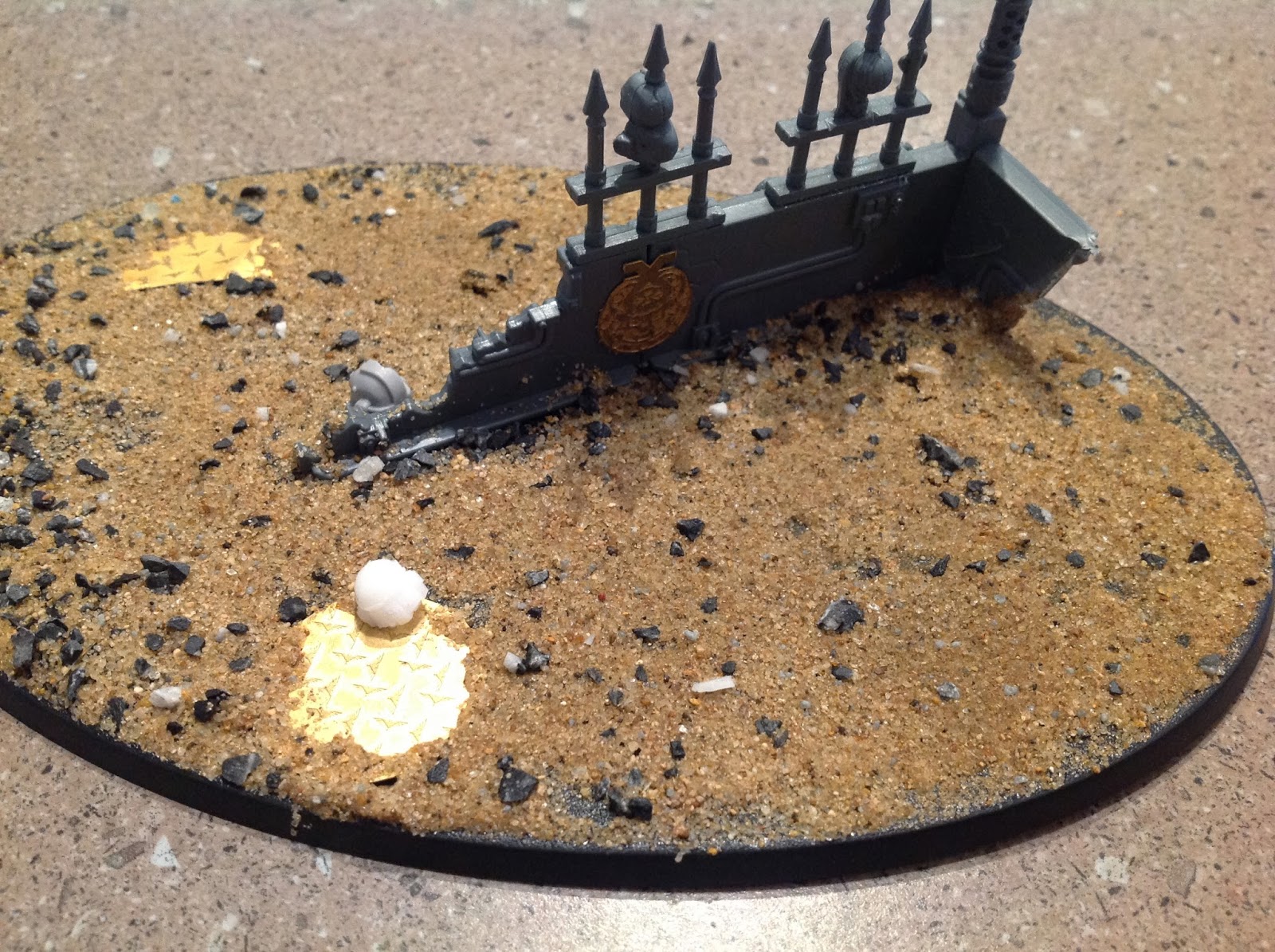 The final base is a more dramatic example of a last stand. The marines/cultists are long gone, but the evidence is still there. 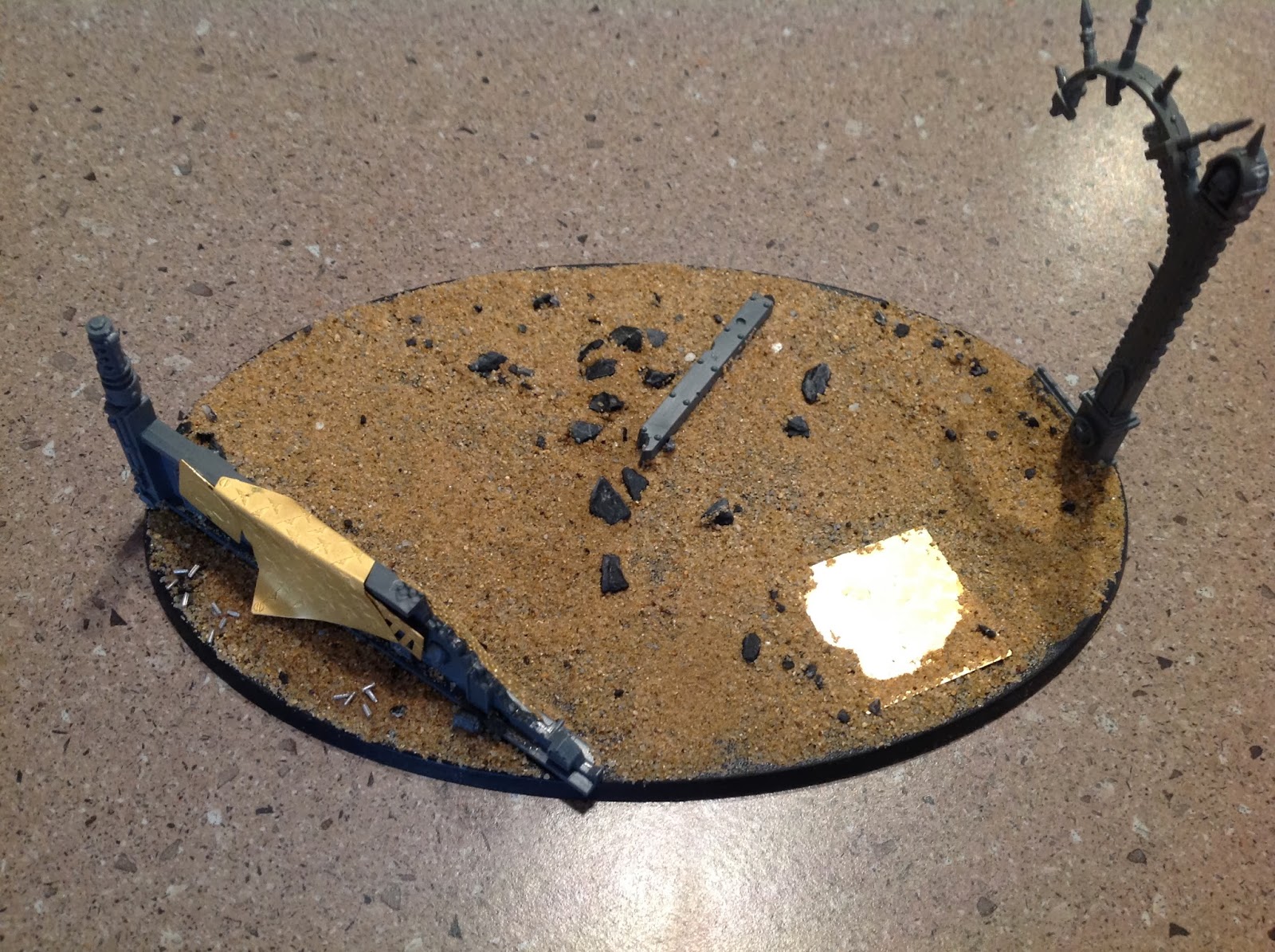 I have wrapped quite a lot of brass around the wall, as if the defenders had tried to improve the armour (in much the way orks do, poor chaos cultists aren't the brightest). There are numerous spent shell casings and a frag grenade, but clearly, they have abandoned the position. 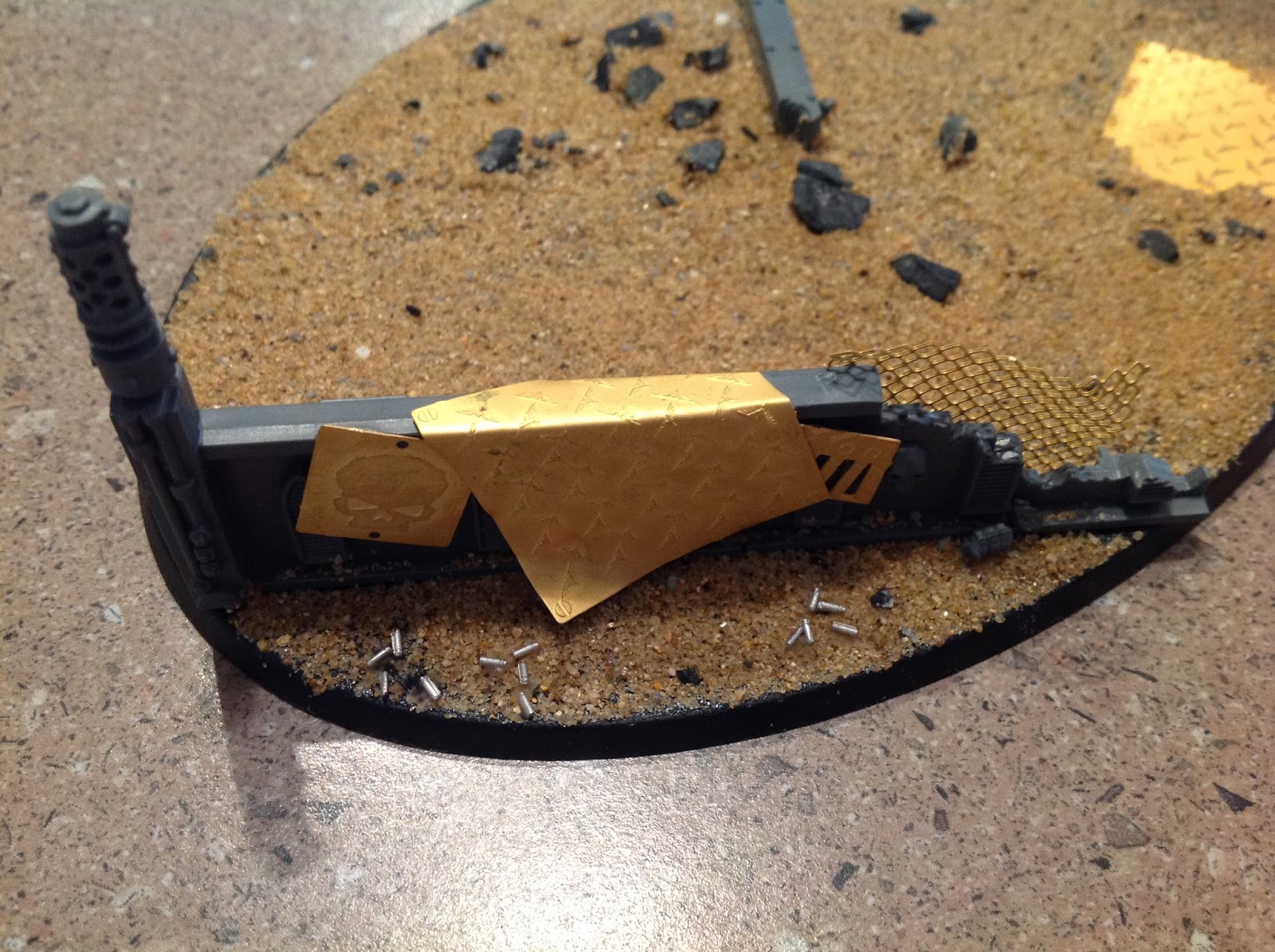 On the back side, you can see that they have put large bolts into the wall to hold on the mesh (the two silver dots on the mesh) as well as leaving a little Khorne glyph. 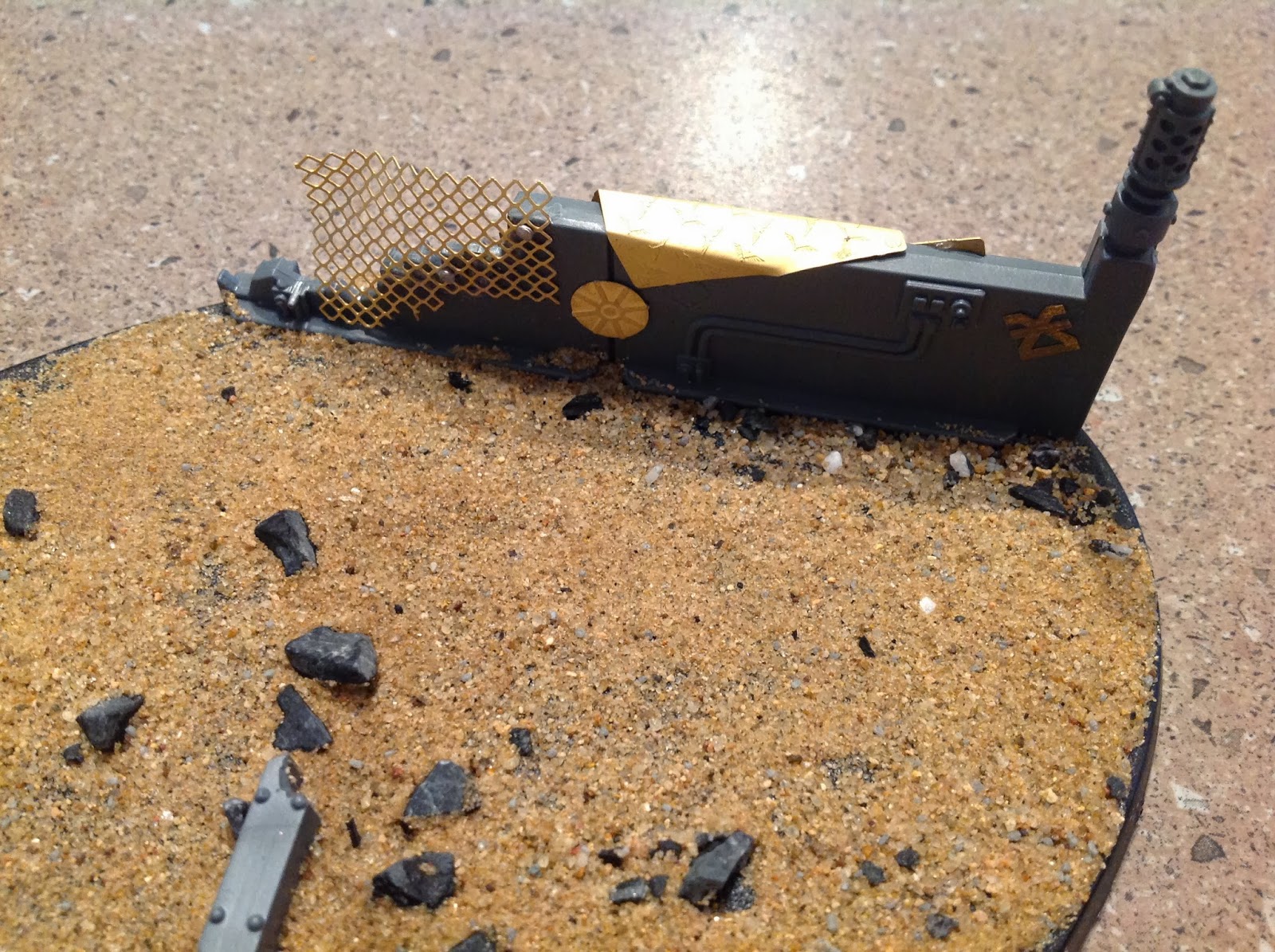 Lastly, there is a small half arch with some chaos spikes on it. 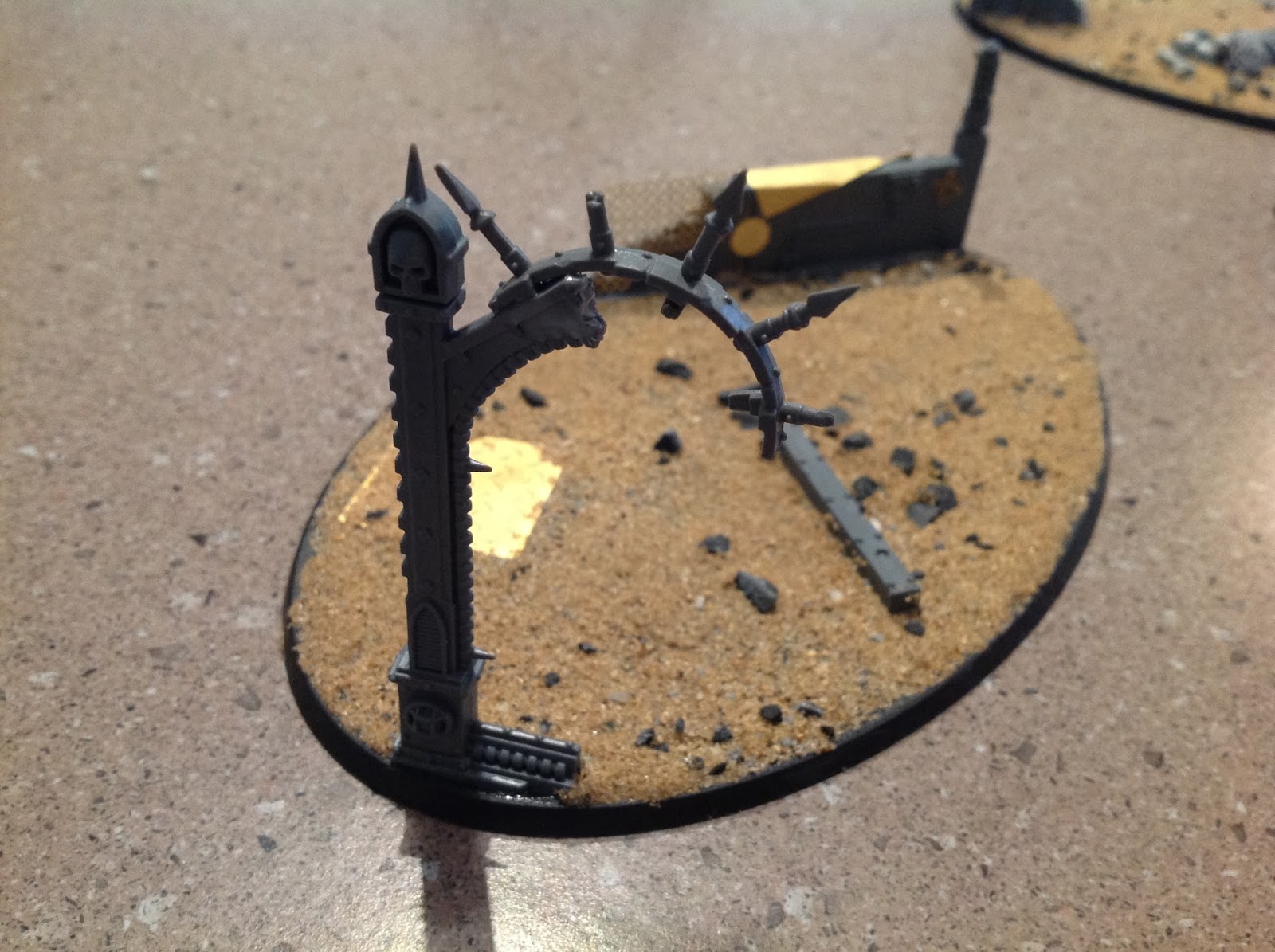 So here is our newly magnetised spearhead of Knights on their bases. I have left the top hatches off so you can see the cockpits I built yesterday, and the other missing panels are removed for painting. 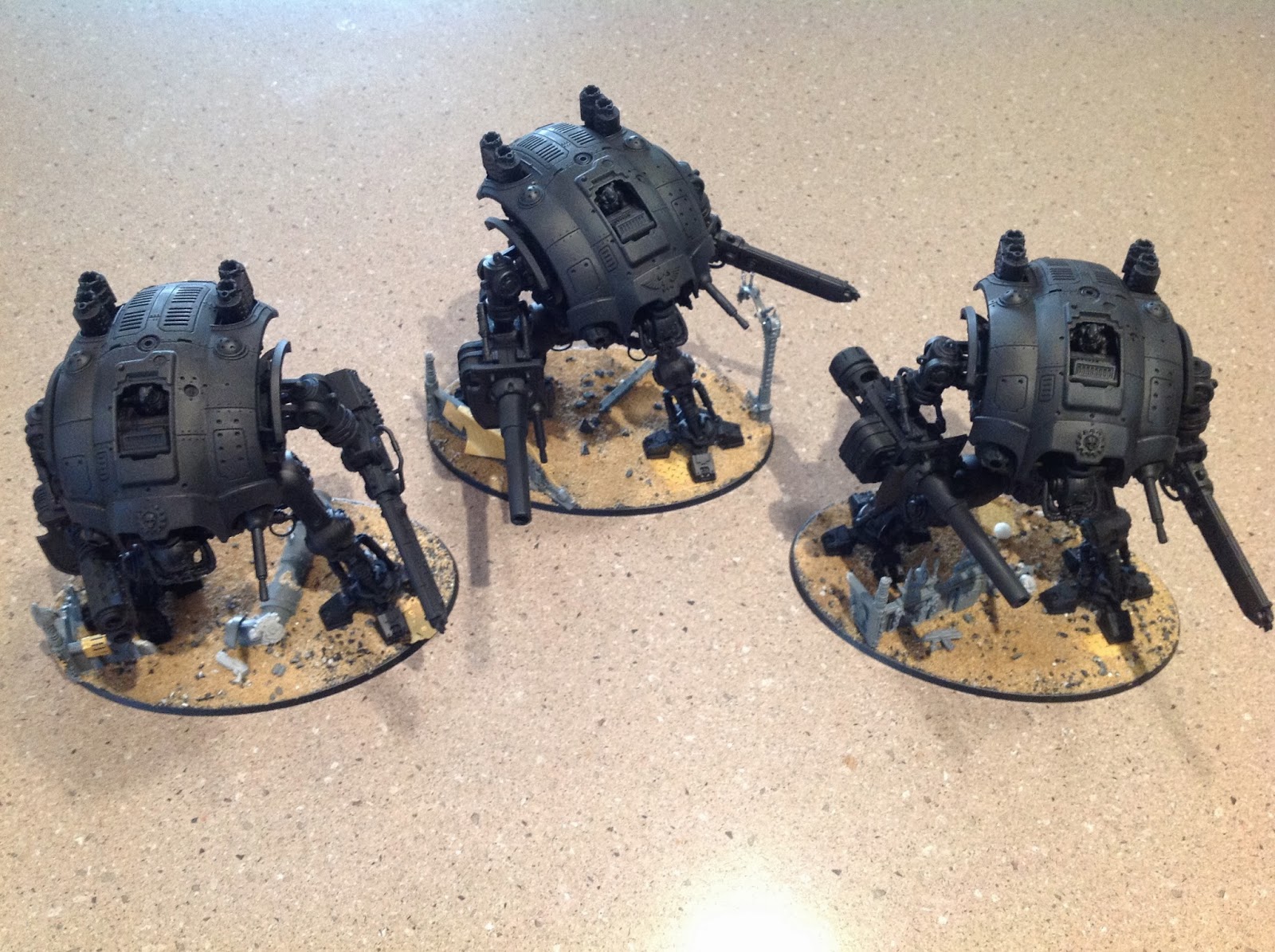 Also, in case anyone was curious about size, they are the exact same height as a drop pod, and a bit wider. 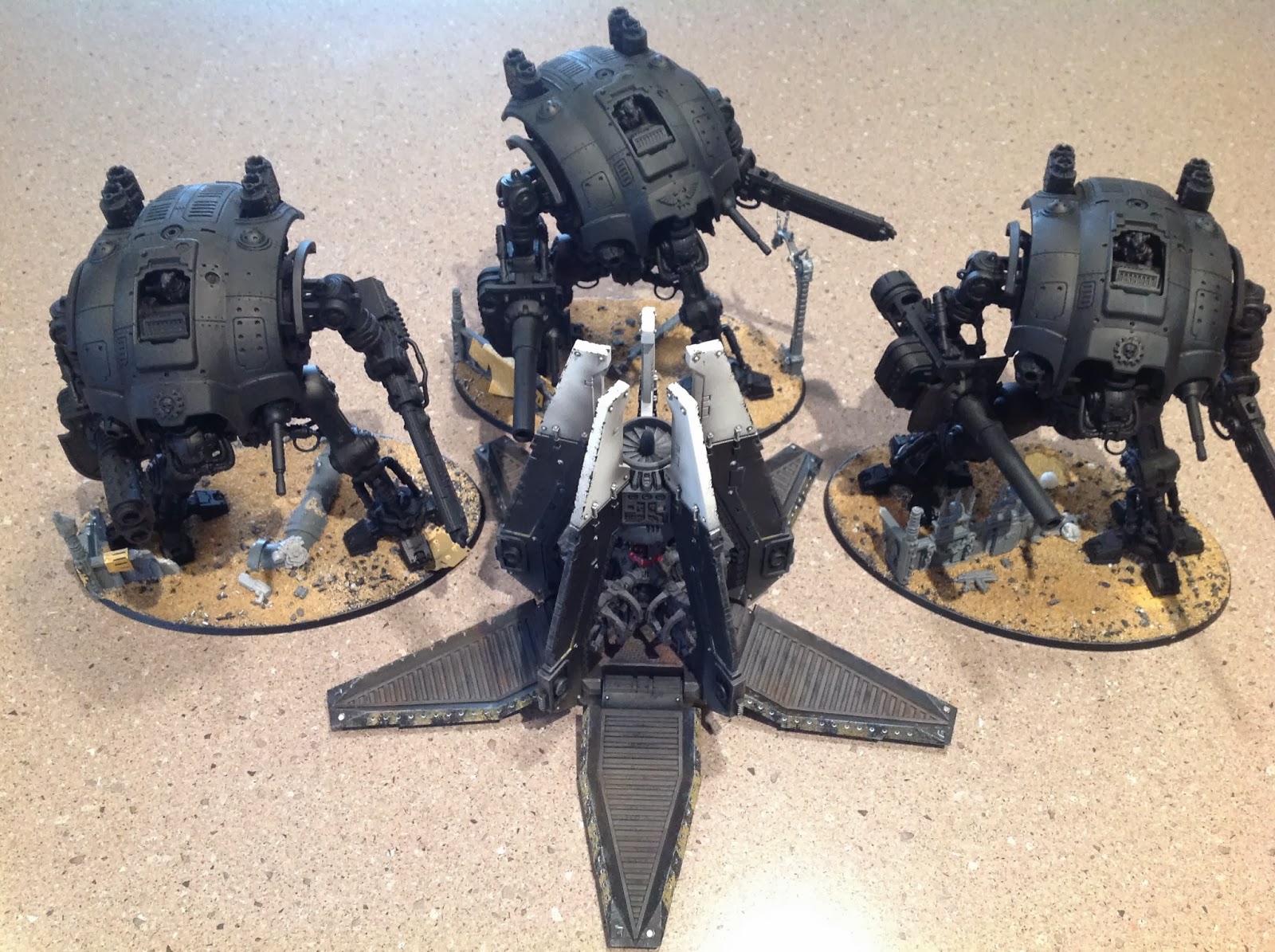 Well, that's all for now, I hope to get these bad boys painted up in the next day or two. Cya then!