Ok, part 2, lets get straight into it. You will have to bare with me, as this post jumps around a little, I could have edited it, but you might gains some insight from my madness when you see the order I paint in. Or go mad yourself. Either way.

I have a few paints here from Minitaire. These are nice paints to work with, and are advertised as good to use straight from the bottle. They actually need a slight bit of thinning in my experience, but, otherwise, they are very friendly. Anyhow, I primed the base components in the same way as Horus himself, a spatter with the primer can to give me that nice surface texture. 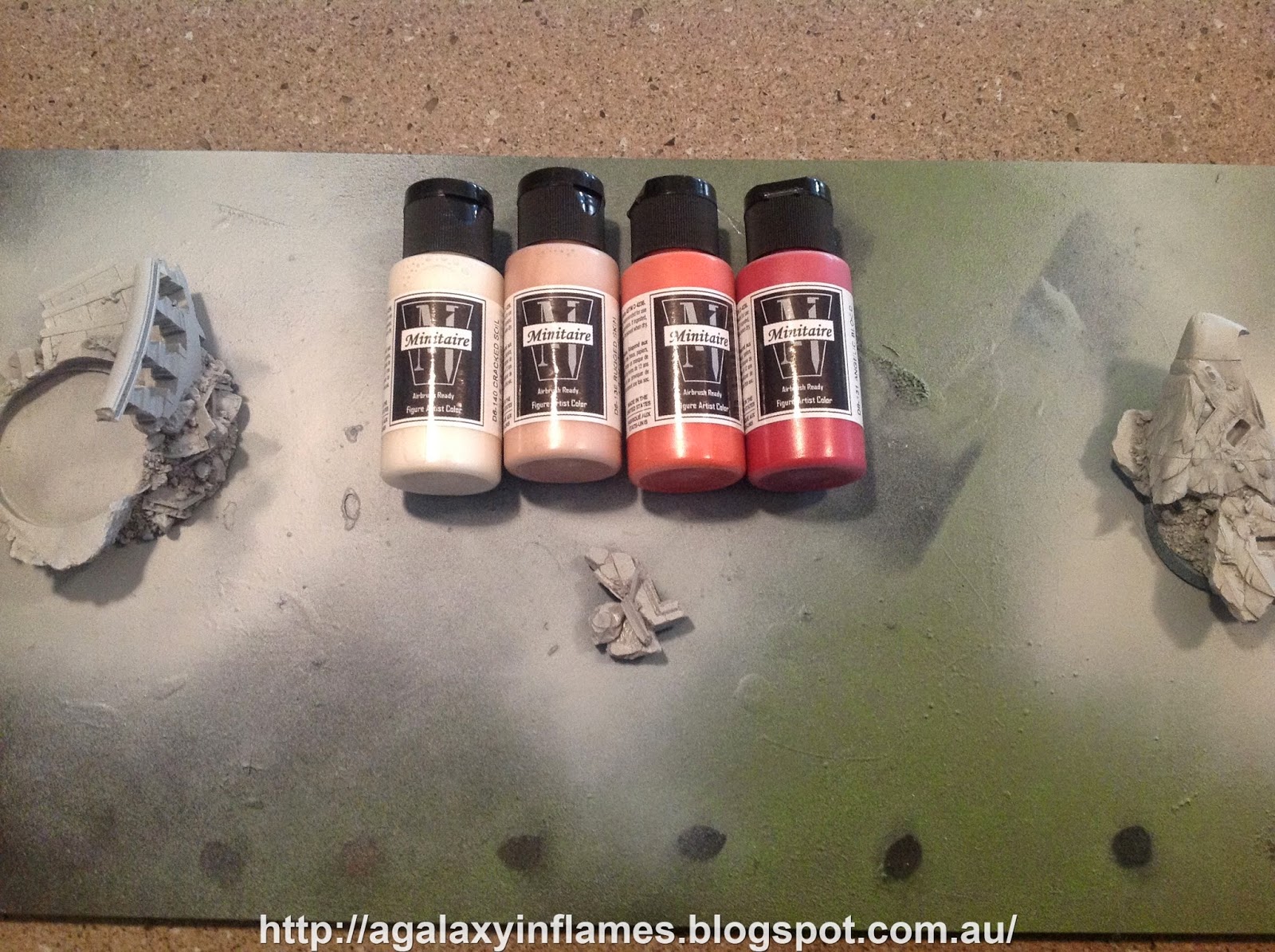 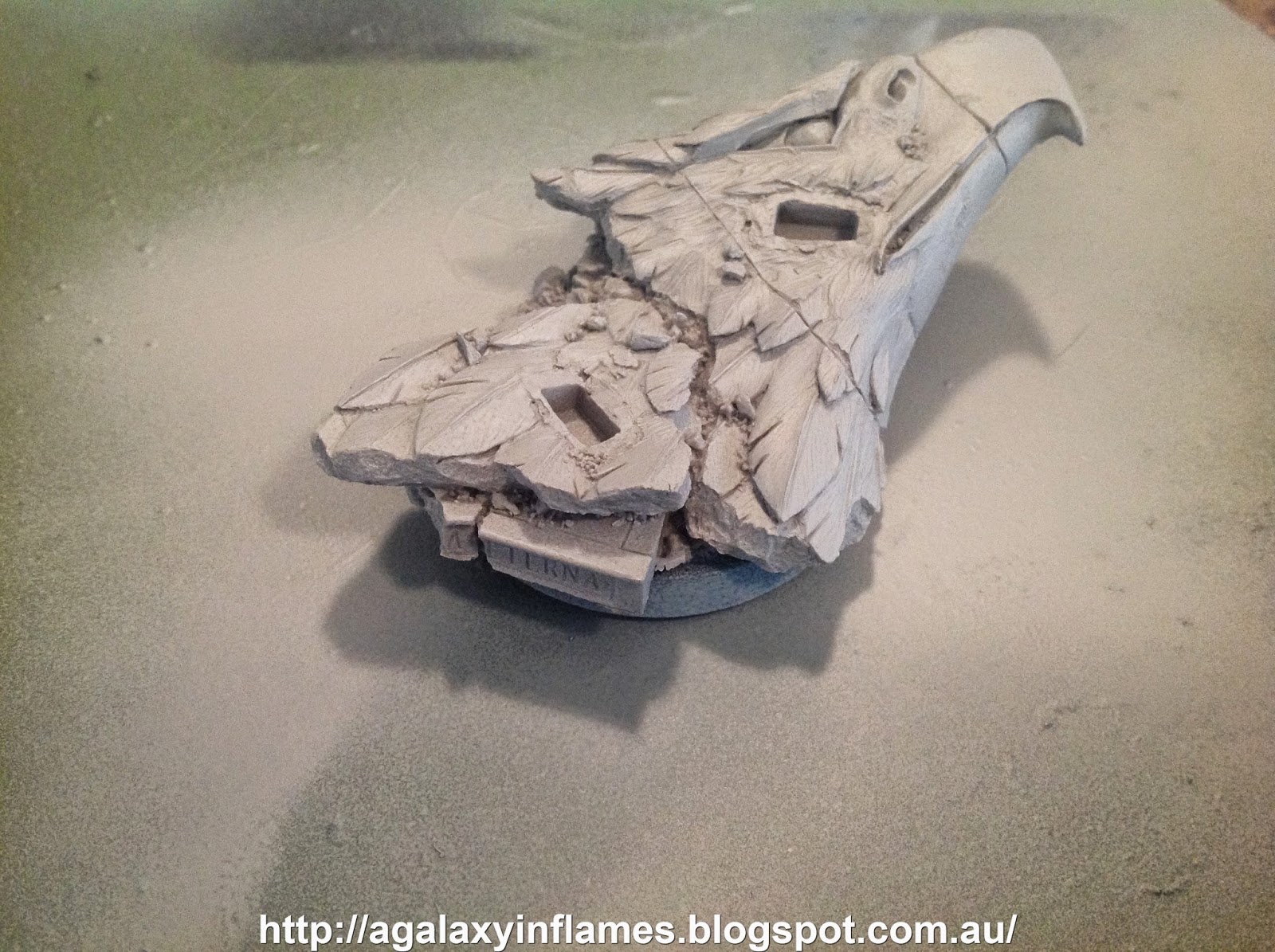 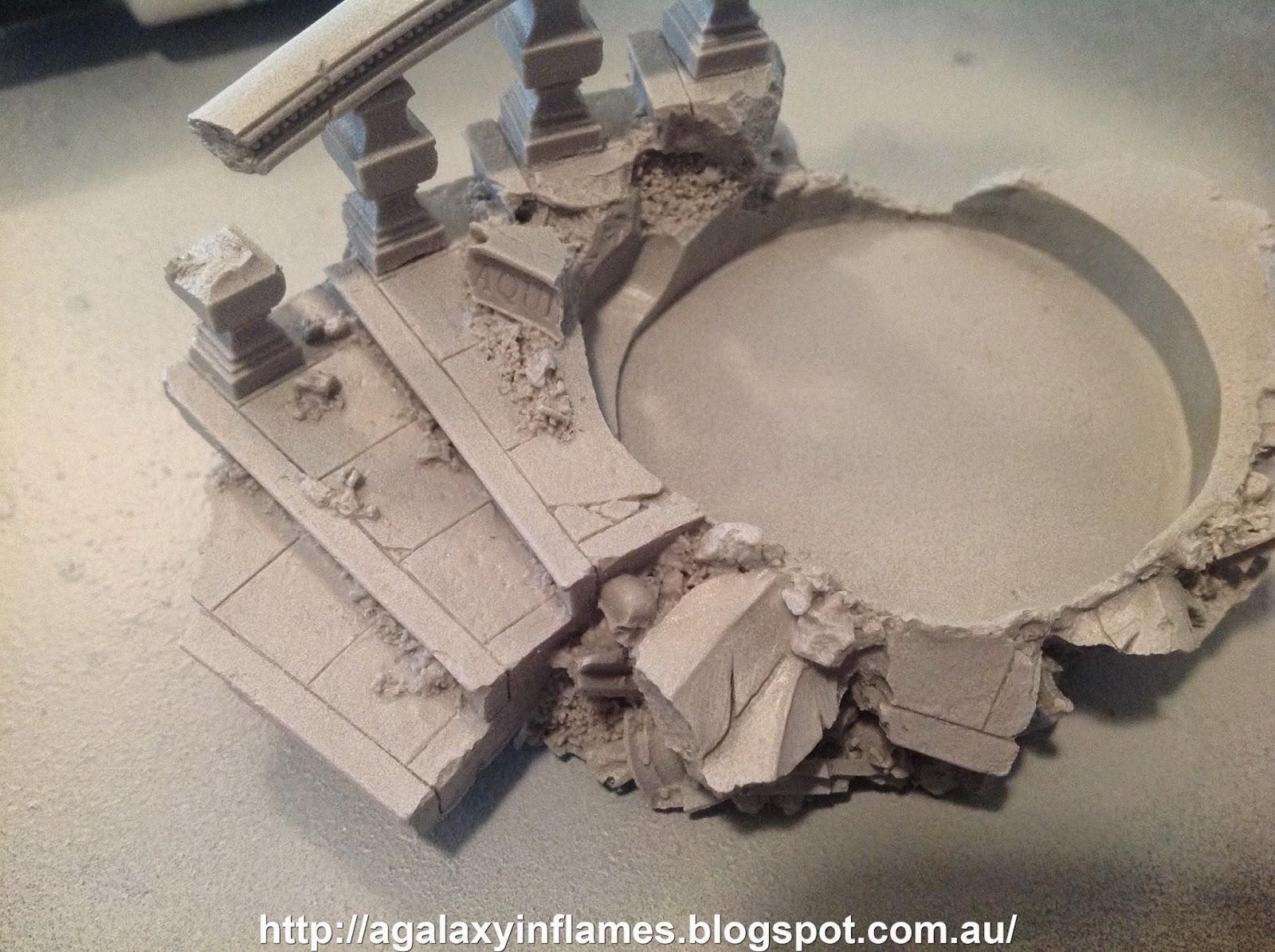 First up, I used this beautiful colour called Rugged Skin. This colour also worked as my basecoat for the face, so win win. I then mixed a little Tamiya brown into the airbrush in order to create some darker patches. After the darker areas, I emptied and cleaned the airbrush, before moving to a pale pink tone, which I liberally applied. The aim here is that I want a nice pink marble, as I felt white would contrast too much with Horus himself. As marble is a collage of colour tones, this worked well. 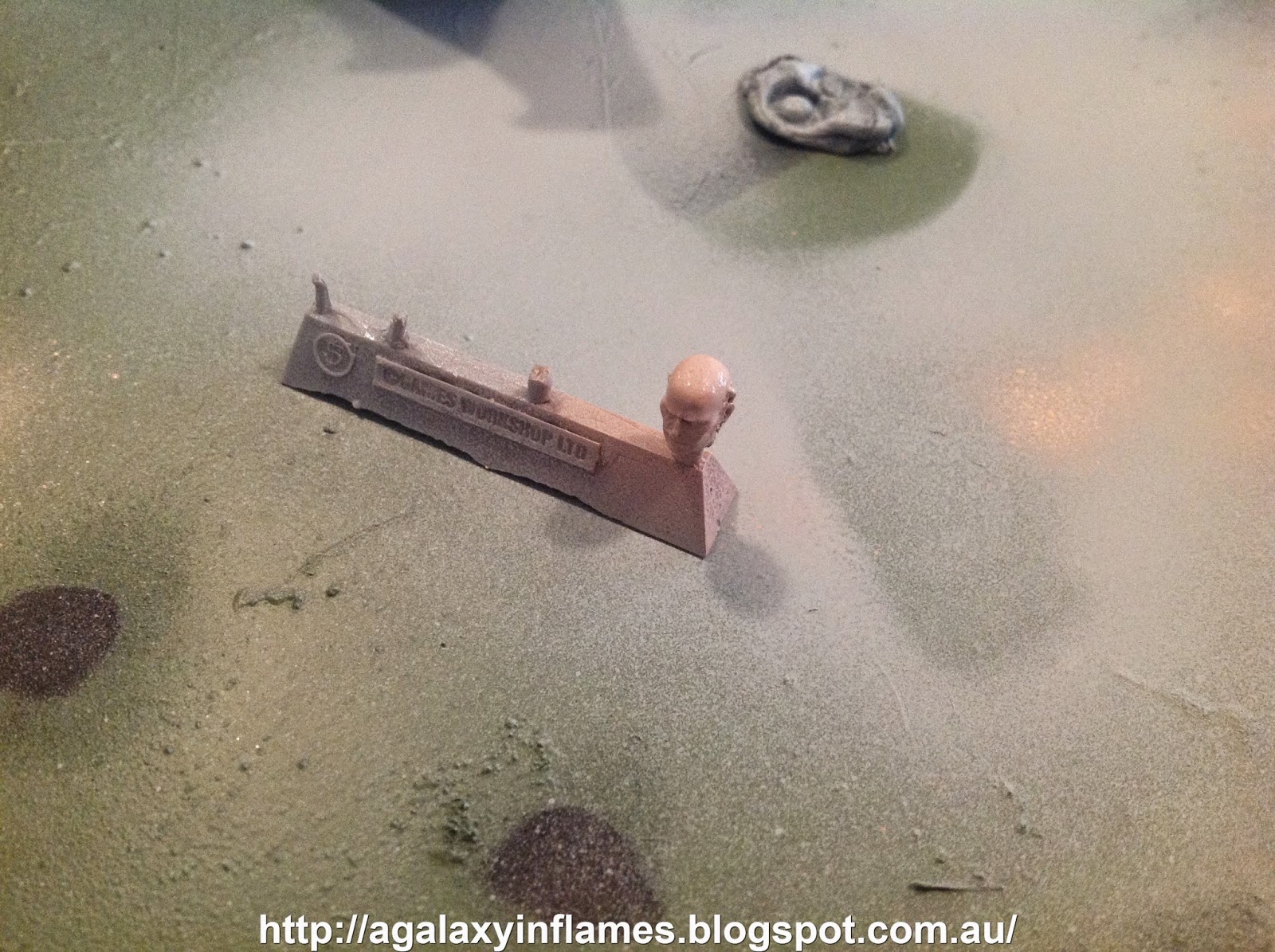 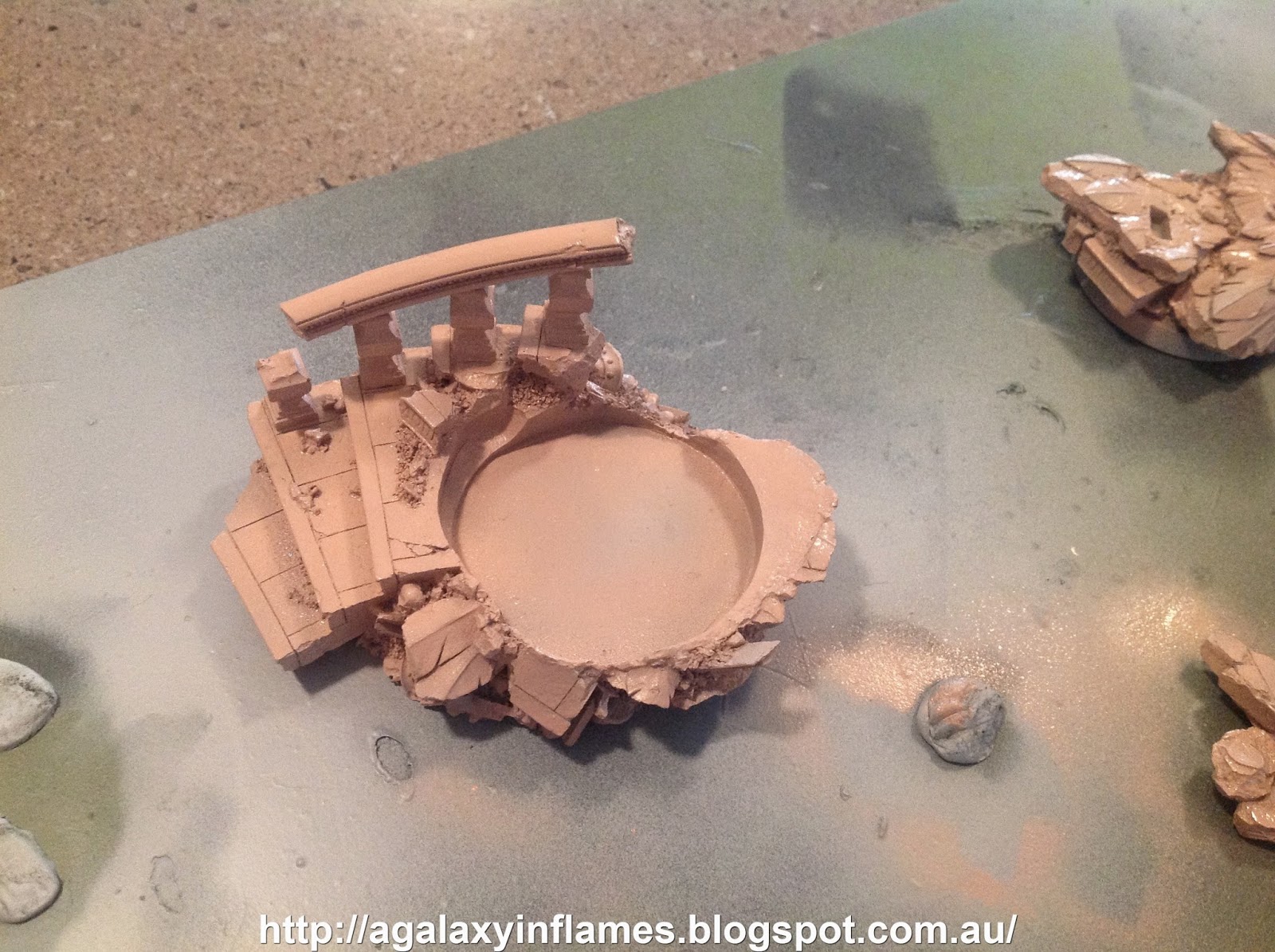 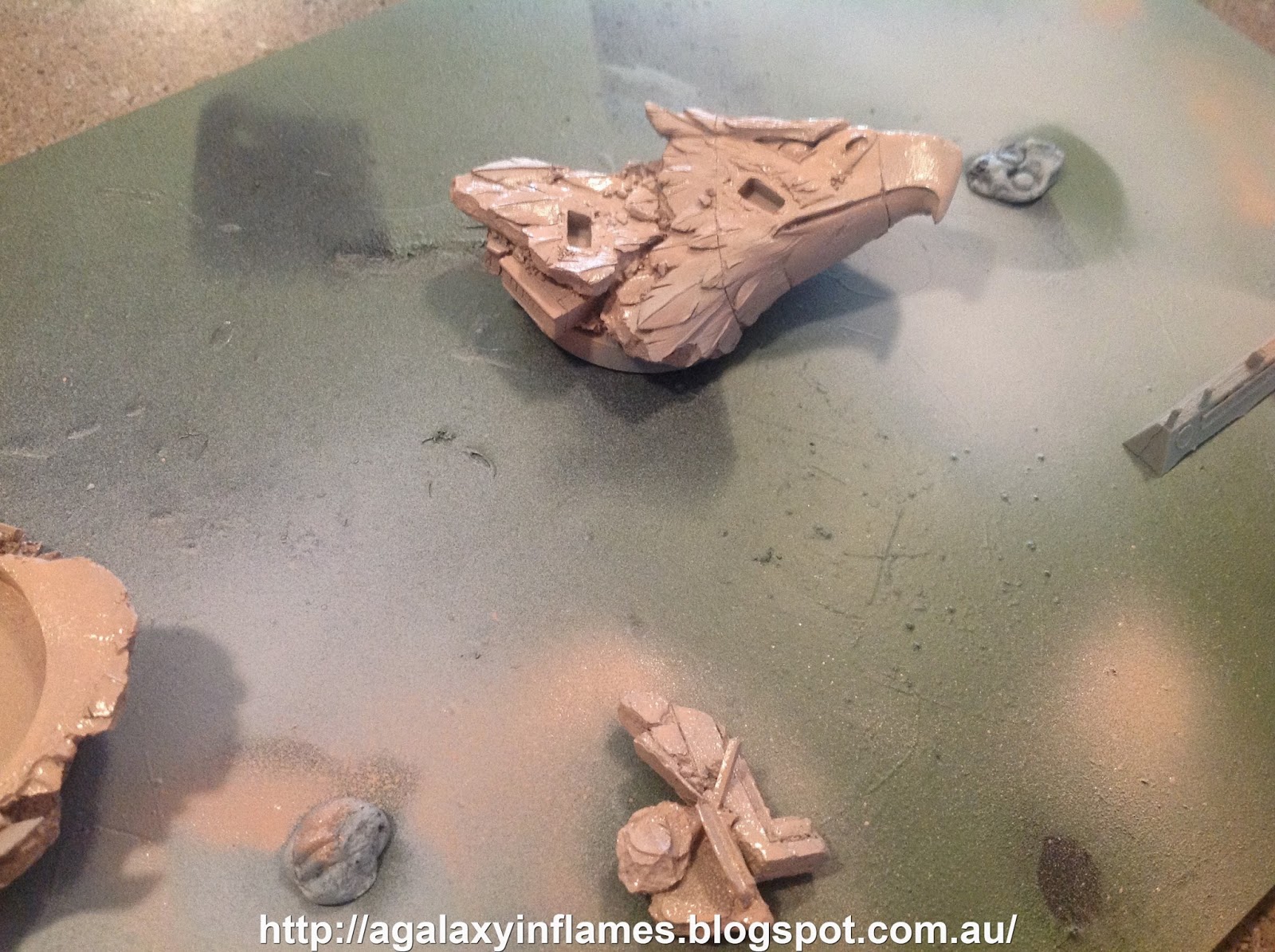 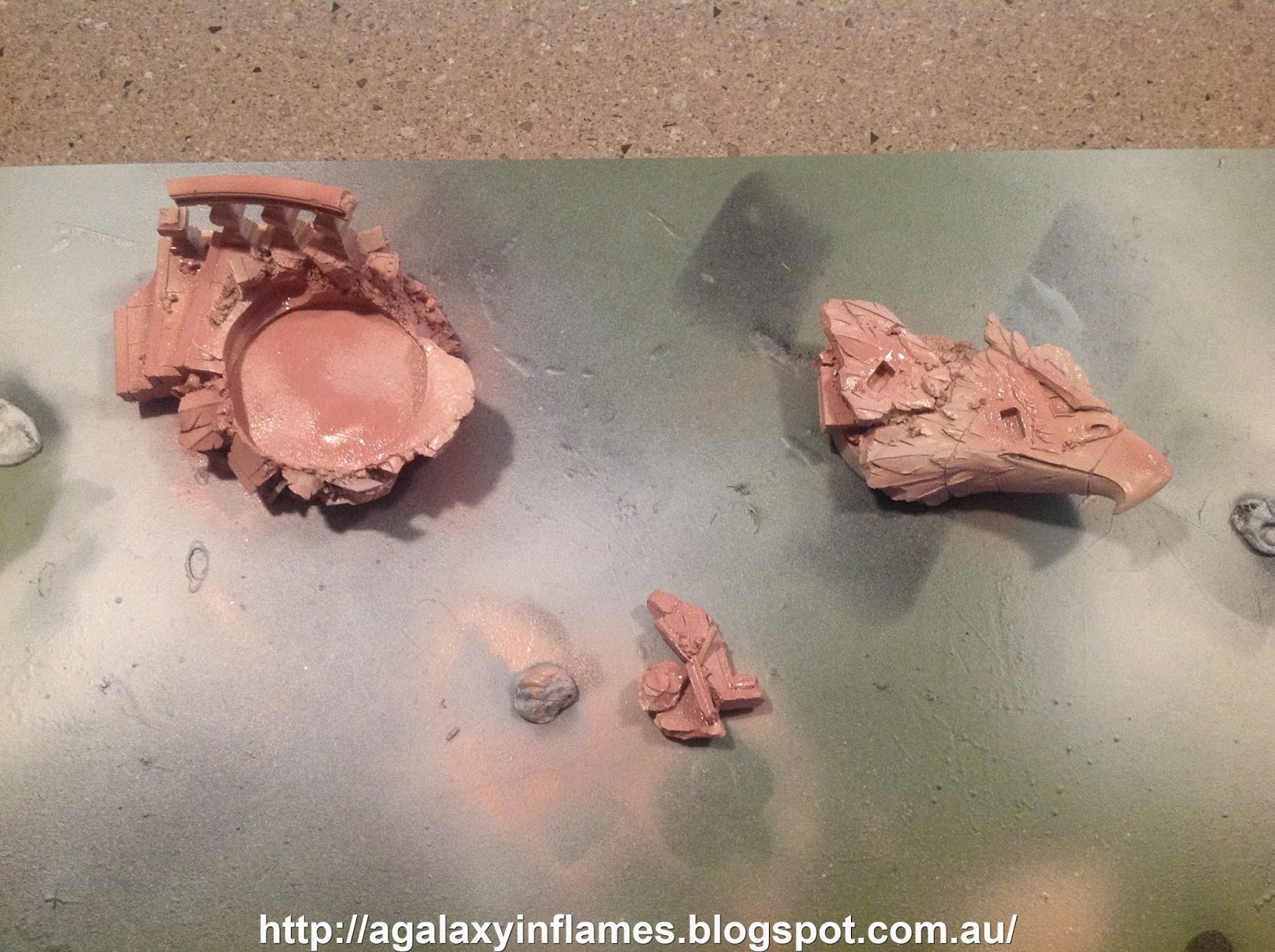 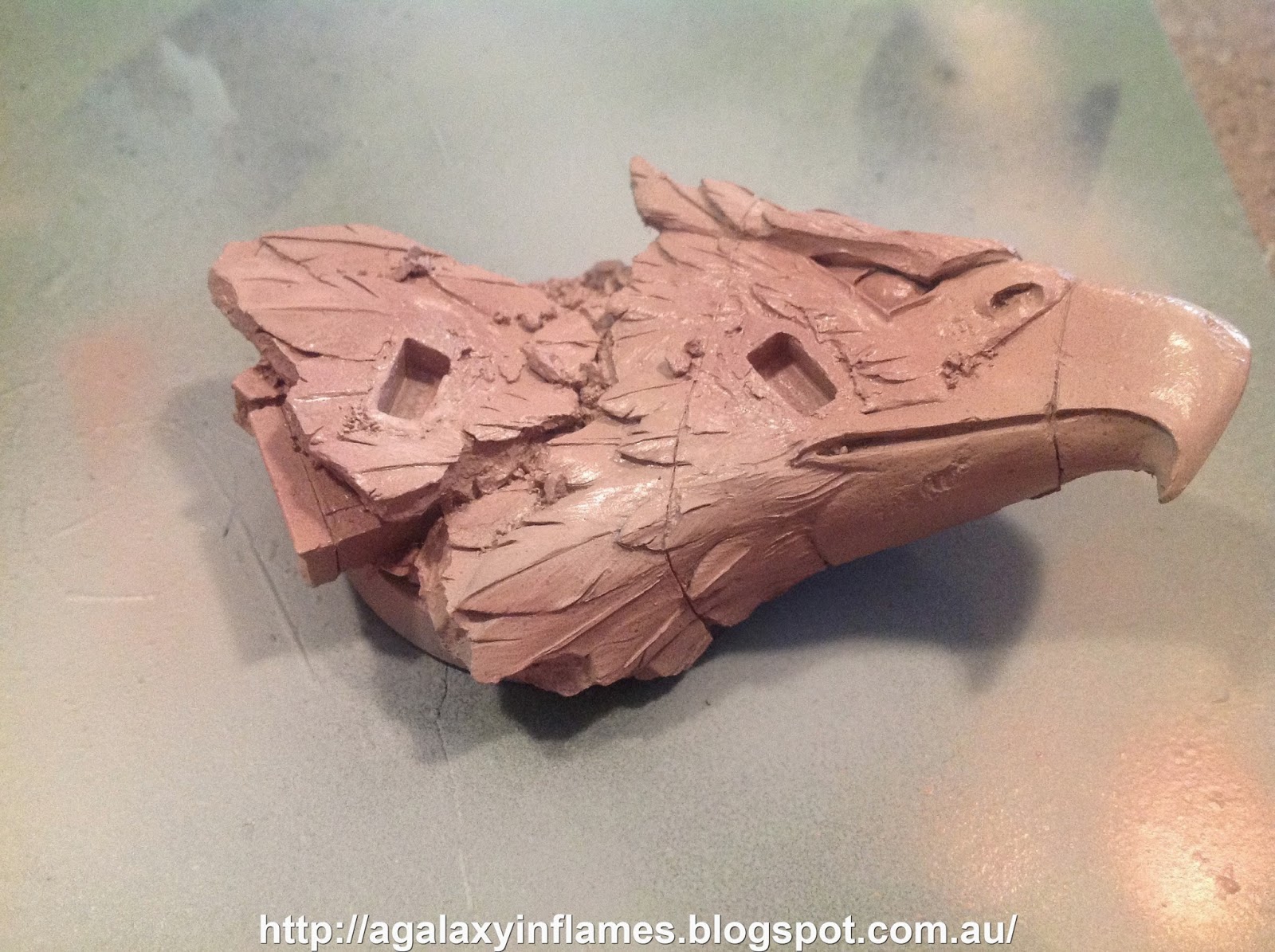 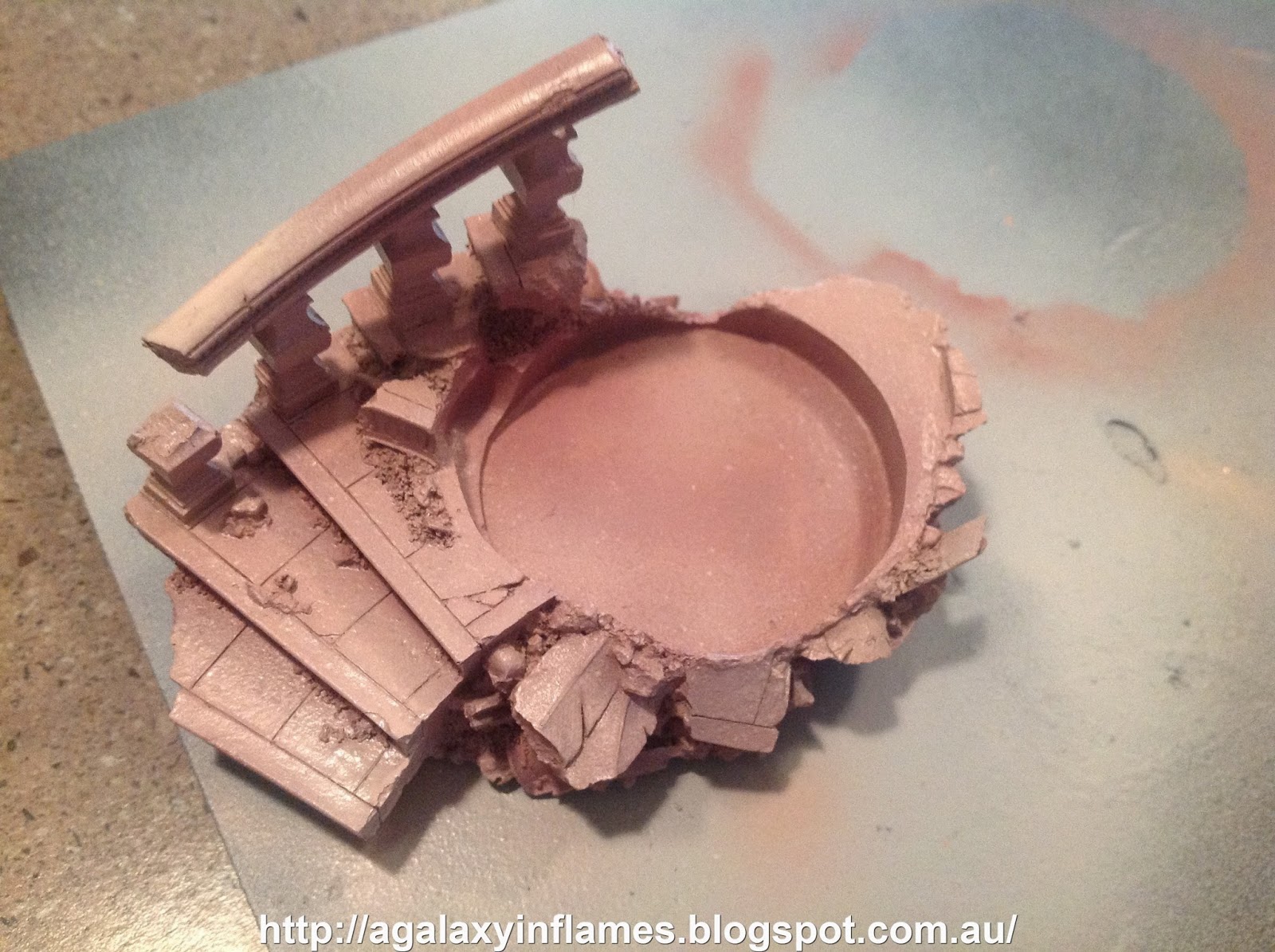 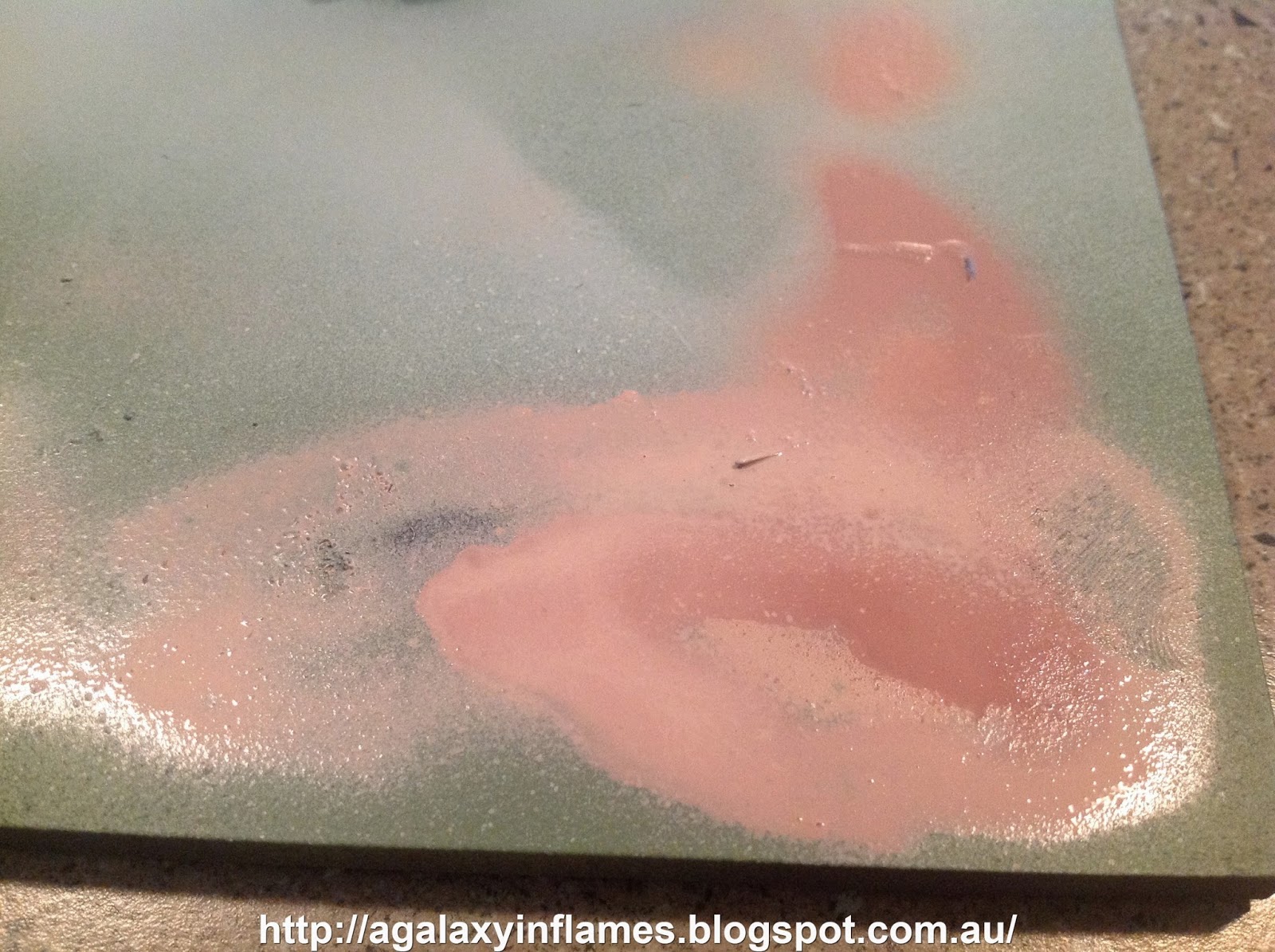 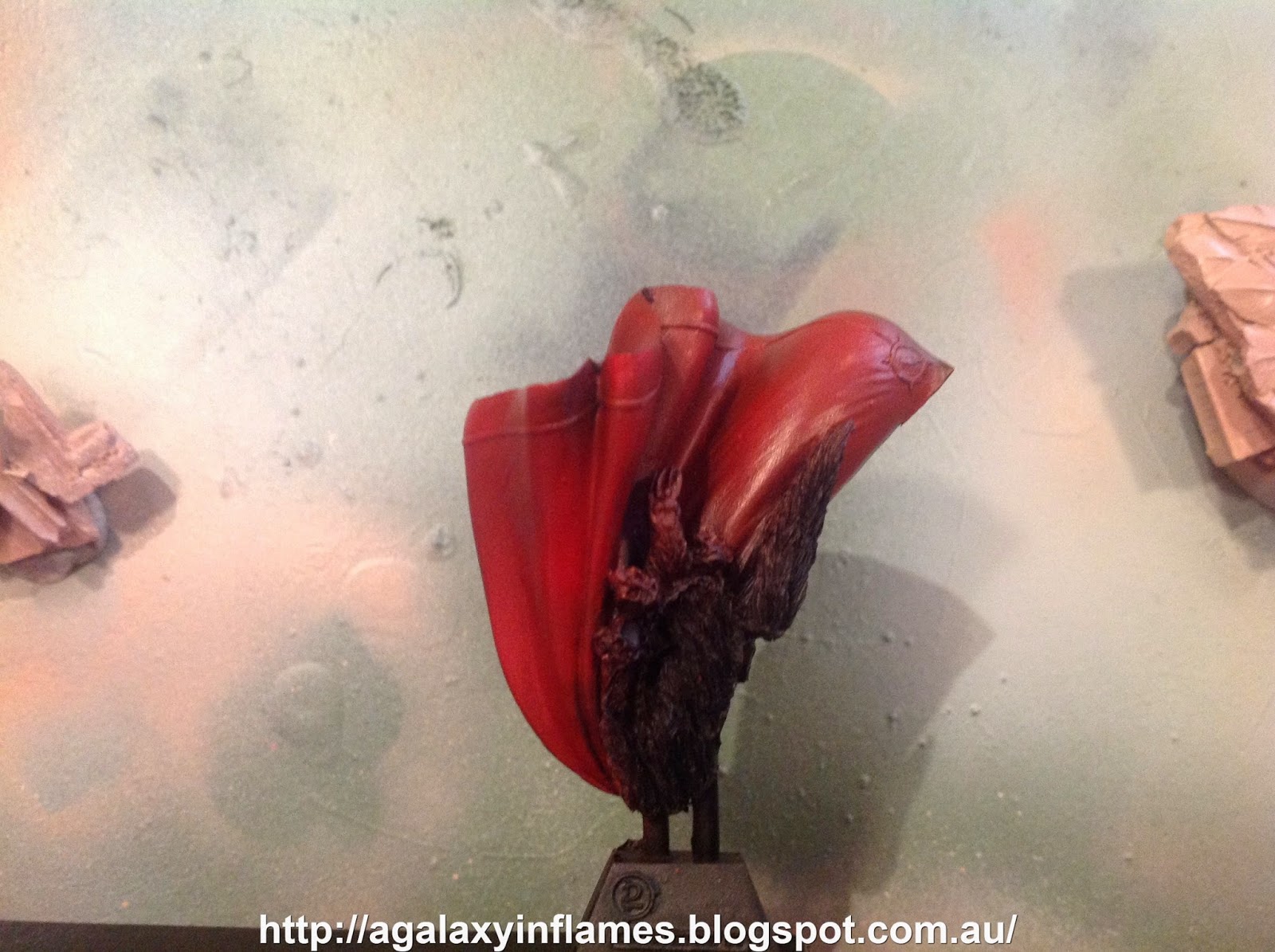 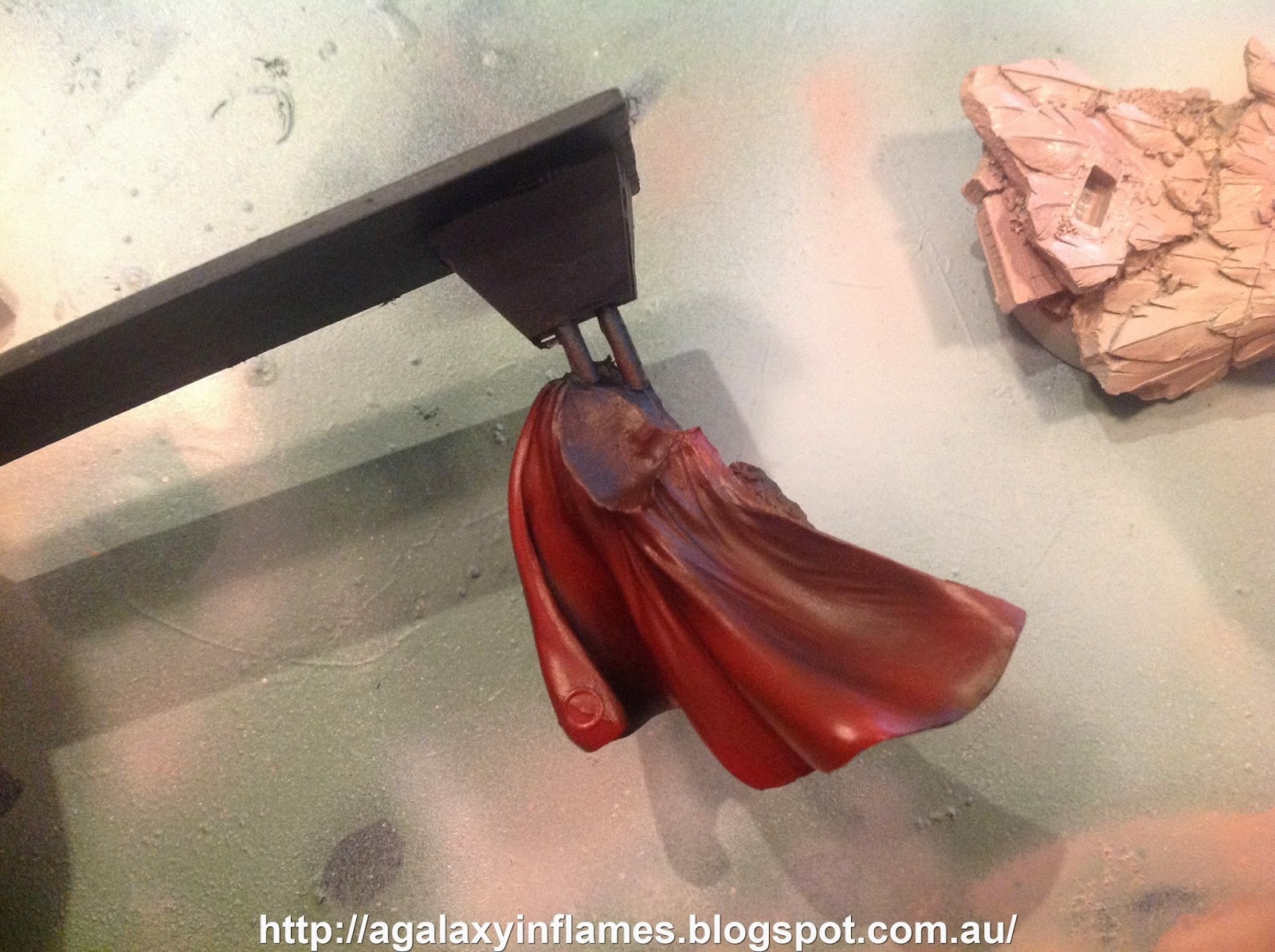 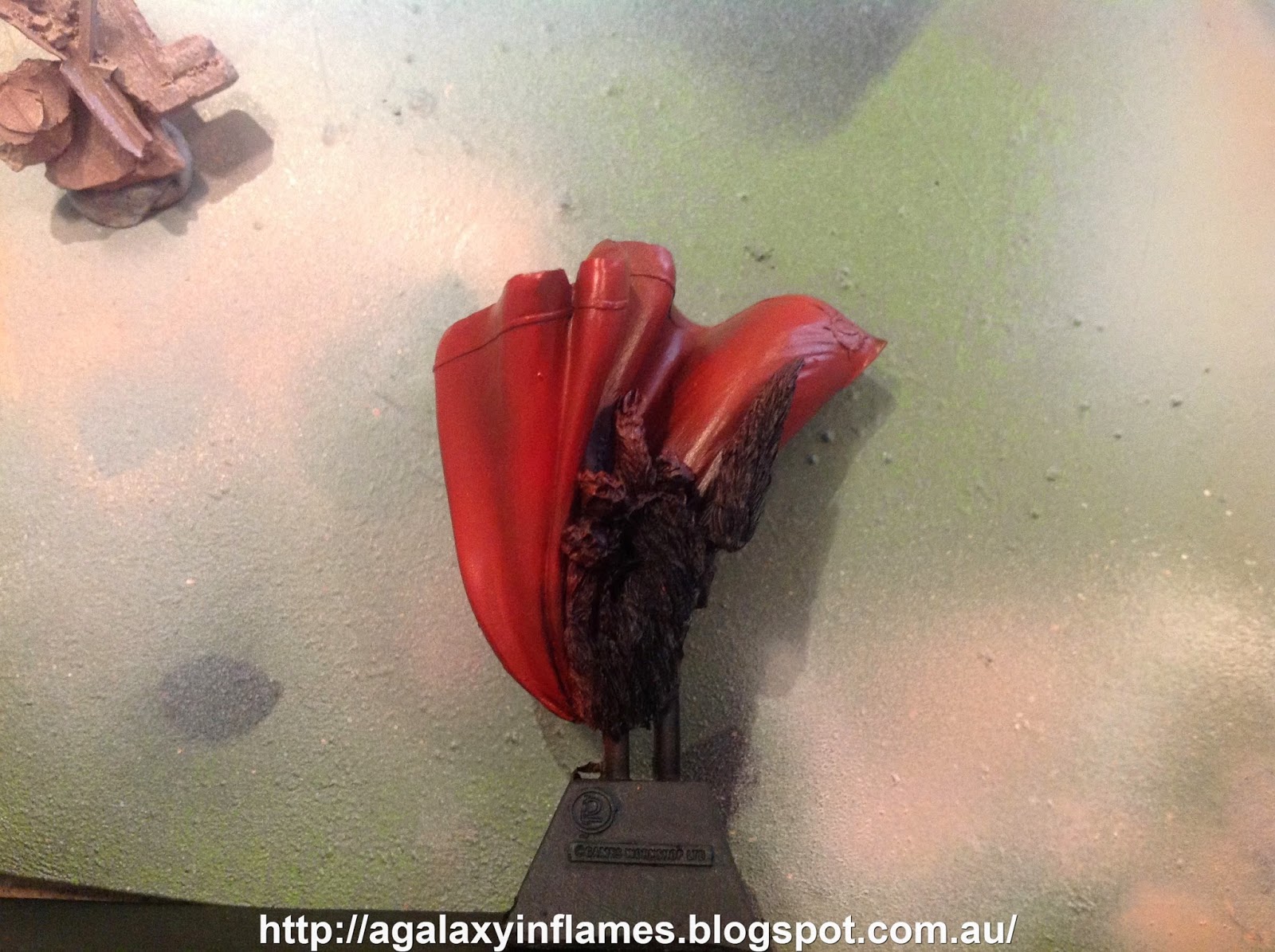 Cloak aside, I jumped back into the base. I now mixed Tamiya XF-1 Flat Black with a tiny bit of Fenris Grey in order to paint the marble veins. The blue ever so softly dilutes the black and contrasts well with the pink marble. The important things to remember are a) don't over-vein, and b) on single pieces of marble, all veins go the same rough direction. After this stage, a thin wash made of Devlan Mud was applied all over. (not shown) 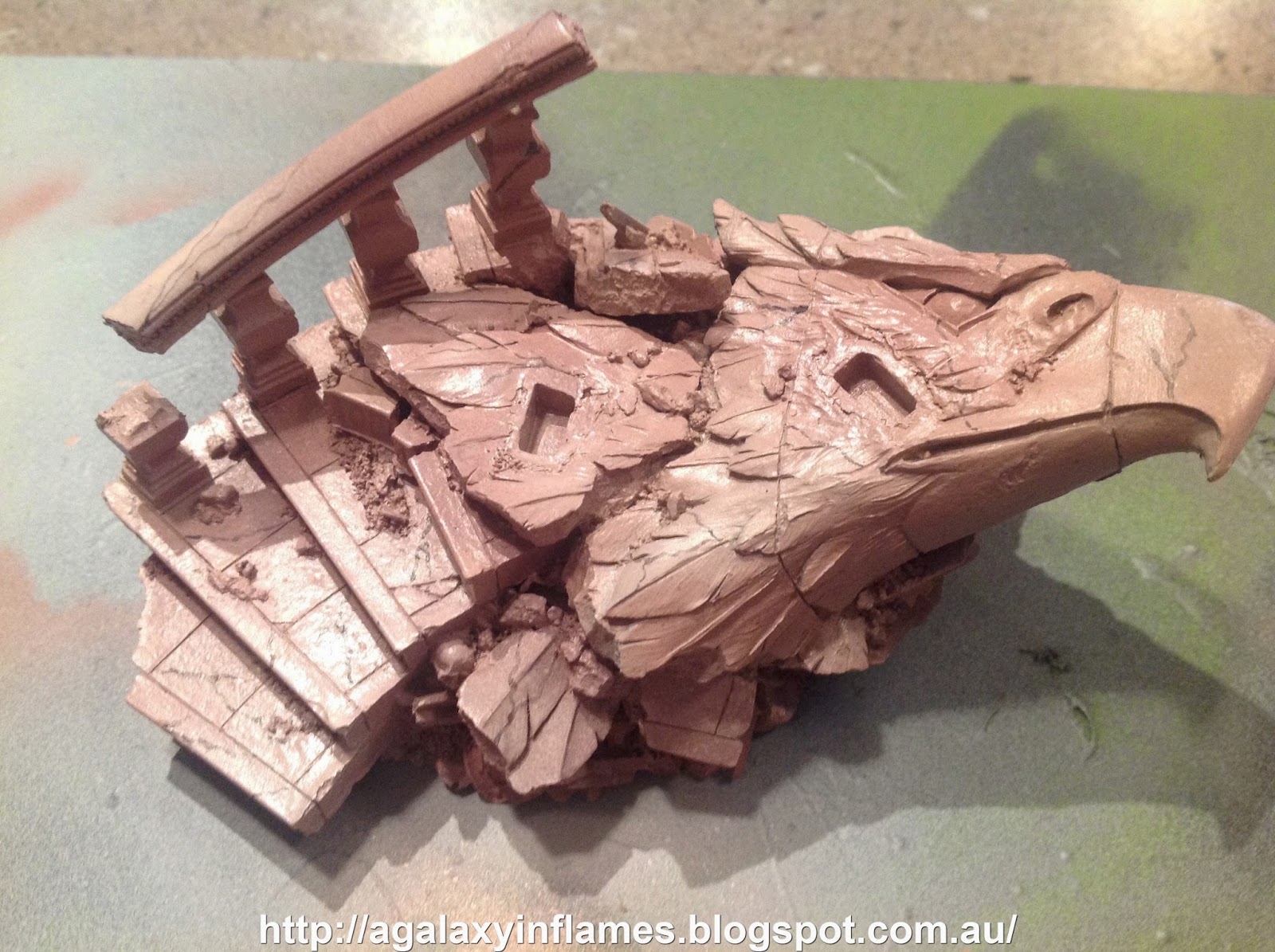 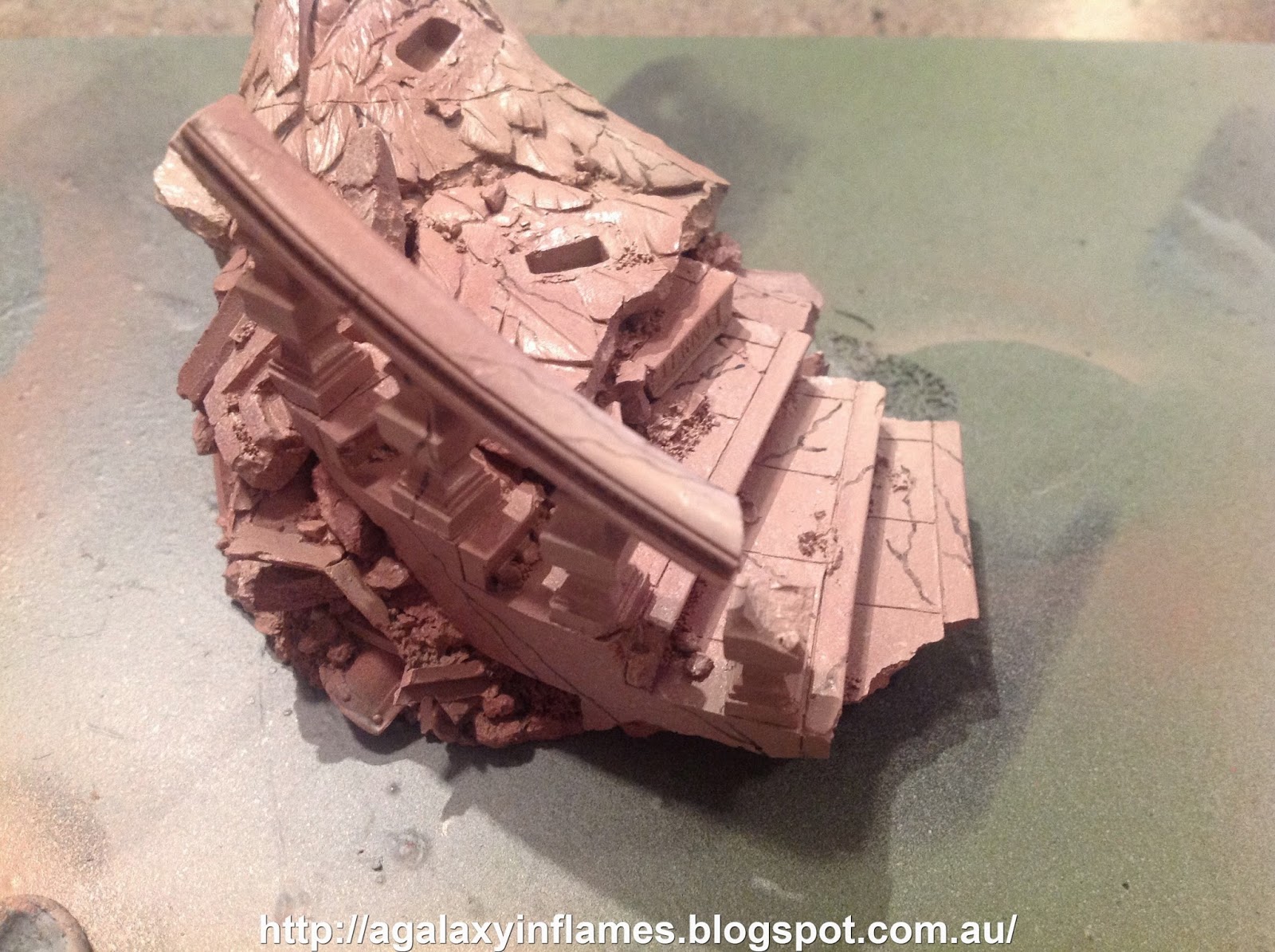 I now attached the cloak, and tidied up the metal work on Horus. At this stage, I could start to see my iffy choices in colours coming together. I also took this opportunity to do the small lens and viewfinder on the upper left of the torso armour. 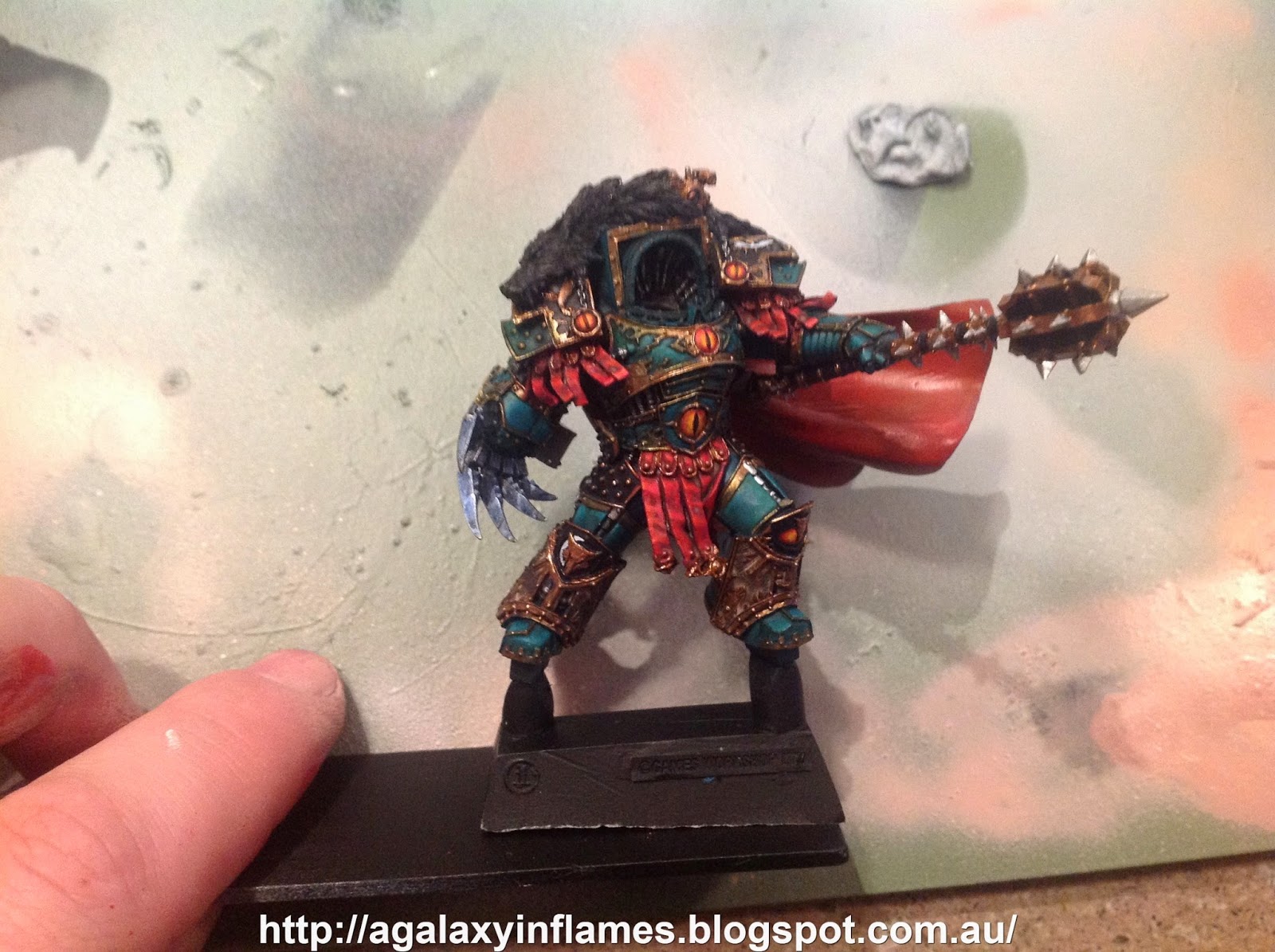 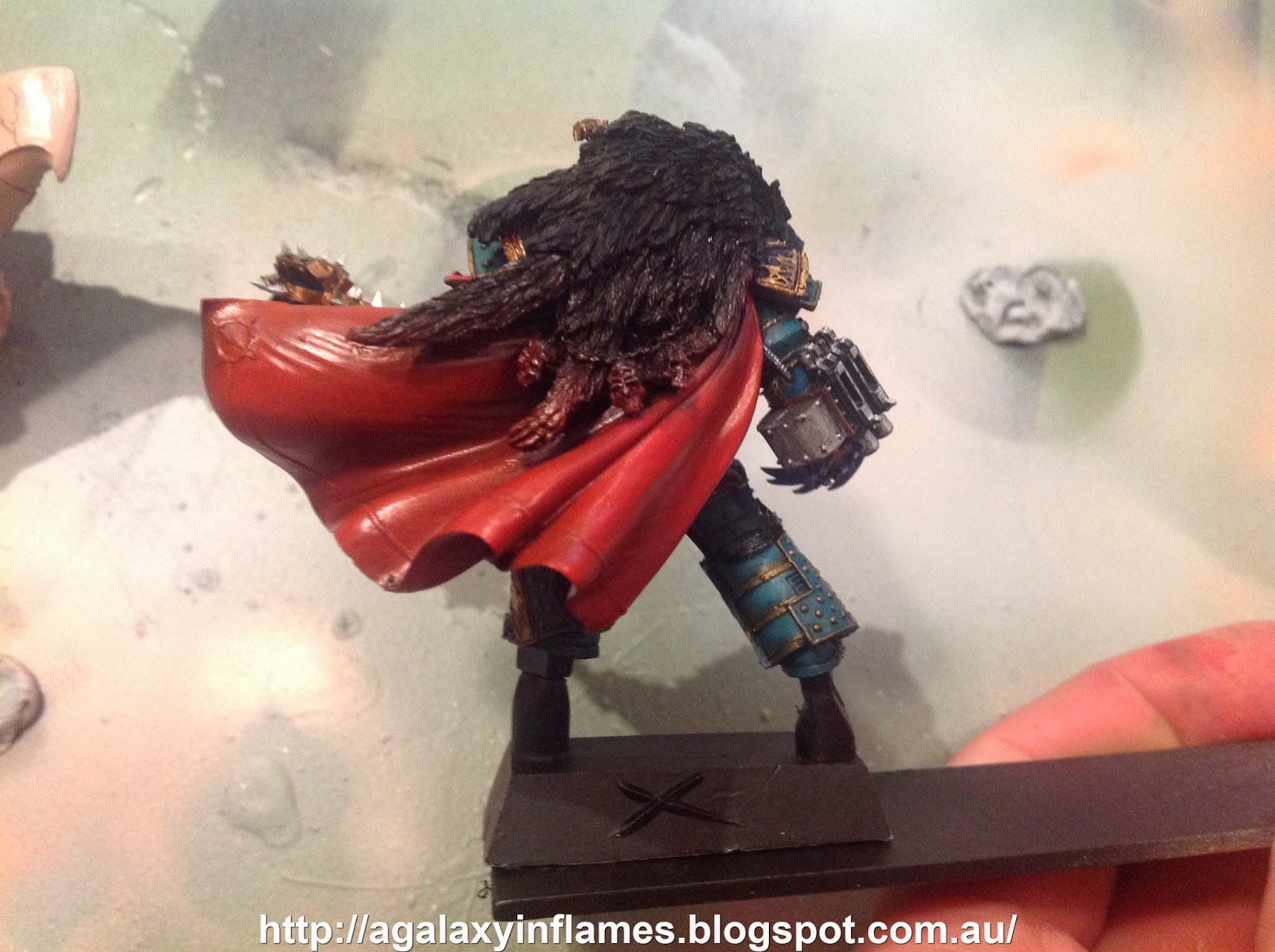 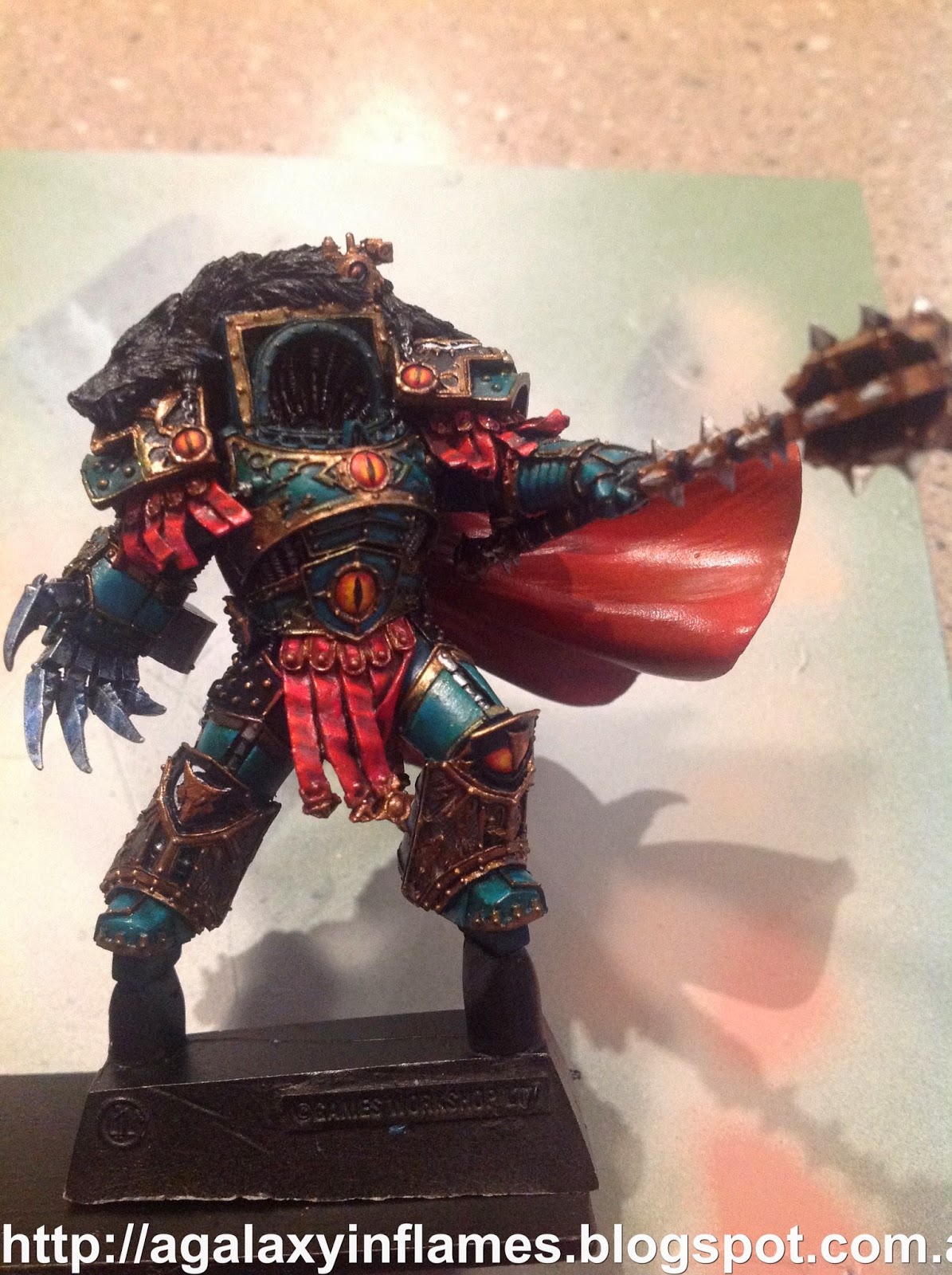 After the first wash, I then picked out all the shoulder pads and steel girders on the base. I then applied some Secret Weapon weathering powder mixed with water, and used it to rust up the girders and blend them into the base, as silver stuck out like Justin Beiber at a  Slayer concert. I then washed then entire base twice with very thin Reikland Fleshshade. I had to go very thin, as GW washes have a nasty habit now of drying in a kind of milky or frosted way. This has to do with the pigment sinking to the lowest part of the wash, and frankly, it's fucking shit. Avoid avoid avoid heavy coats. 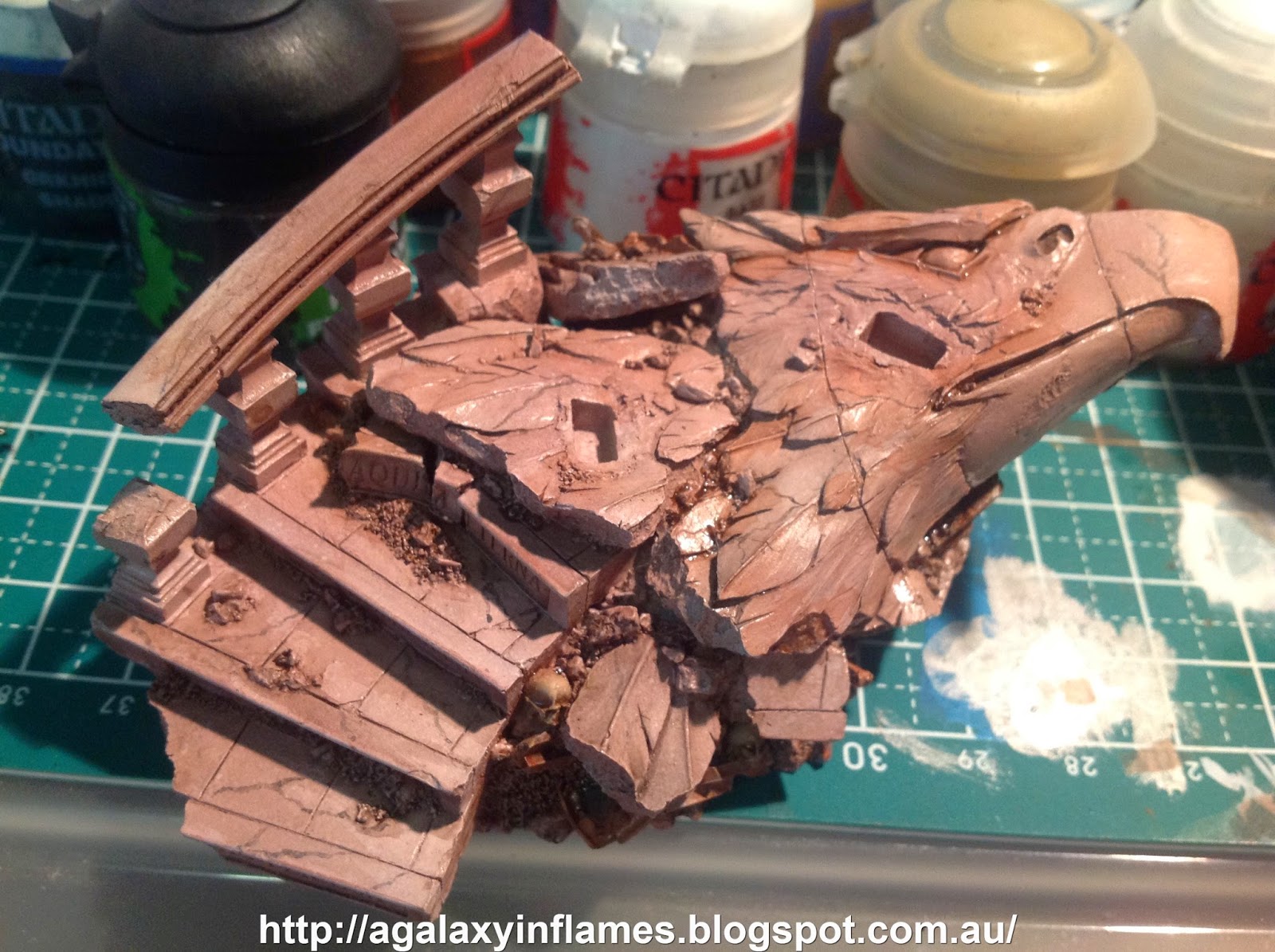 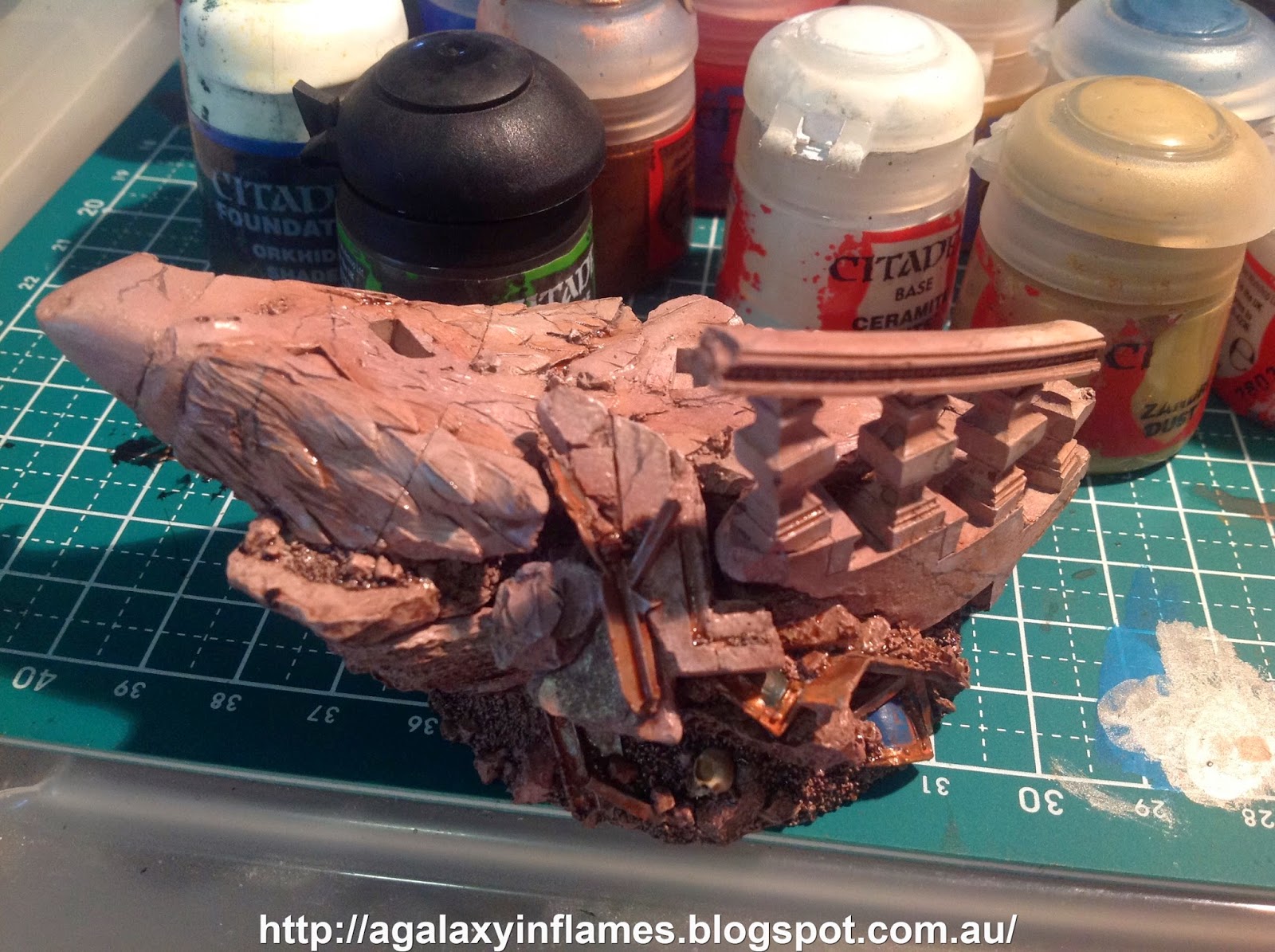 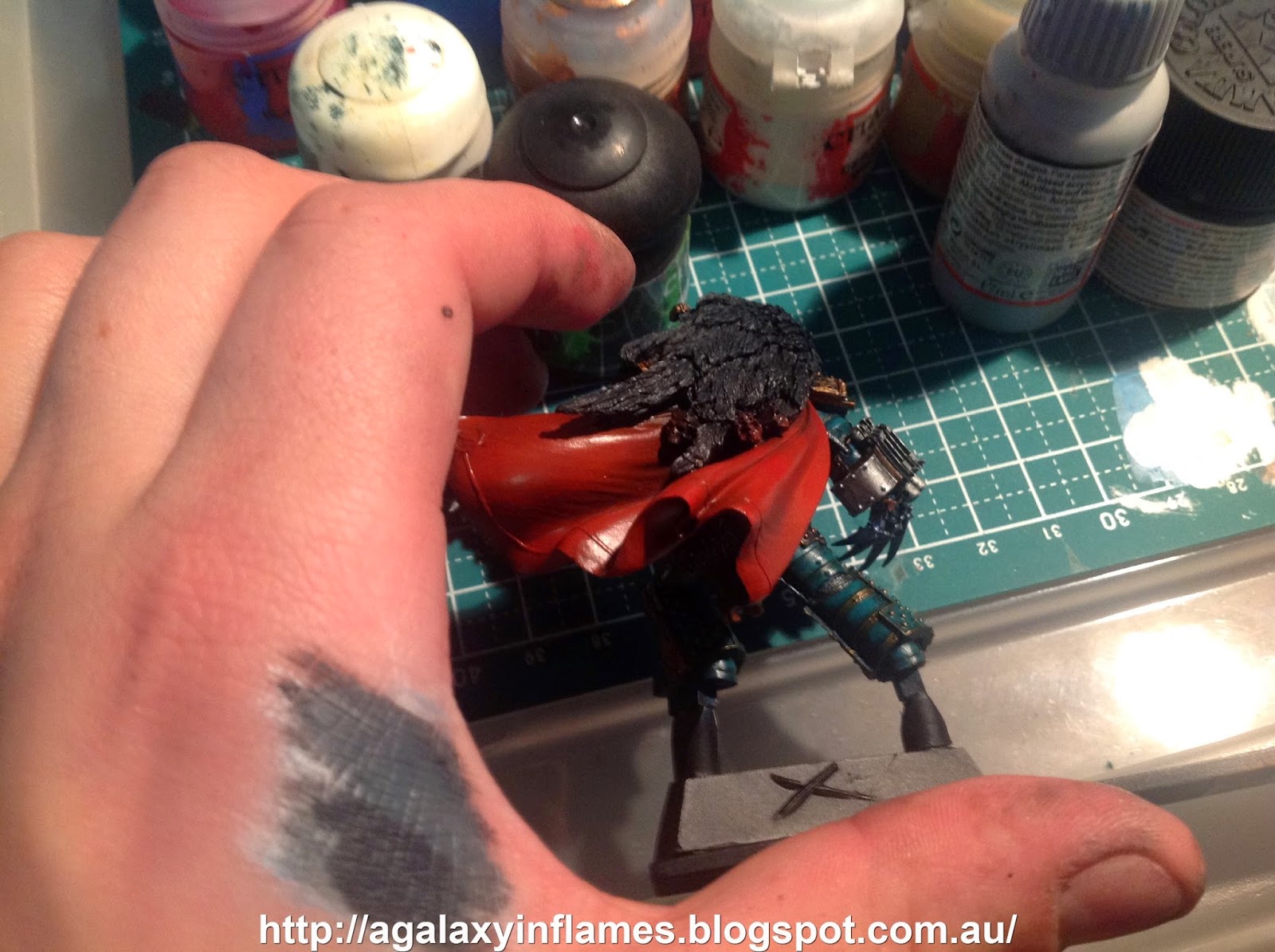 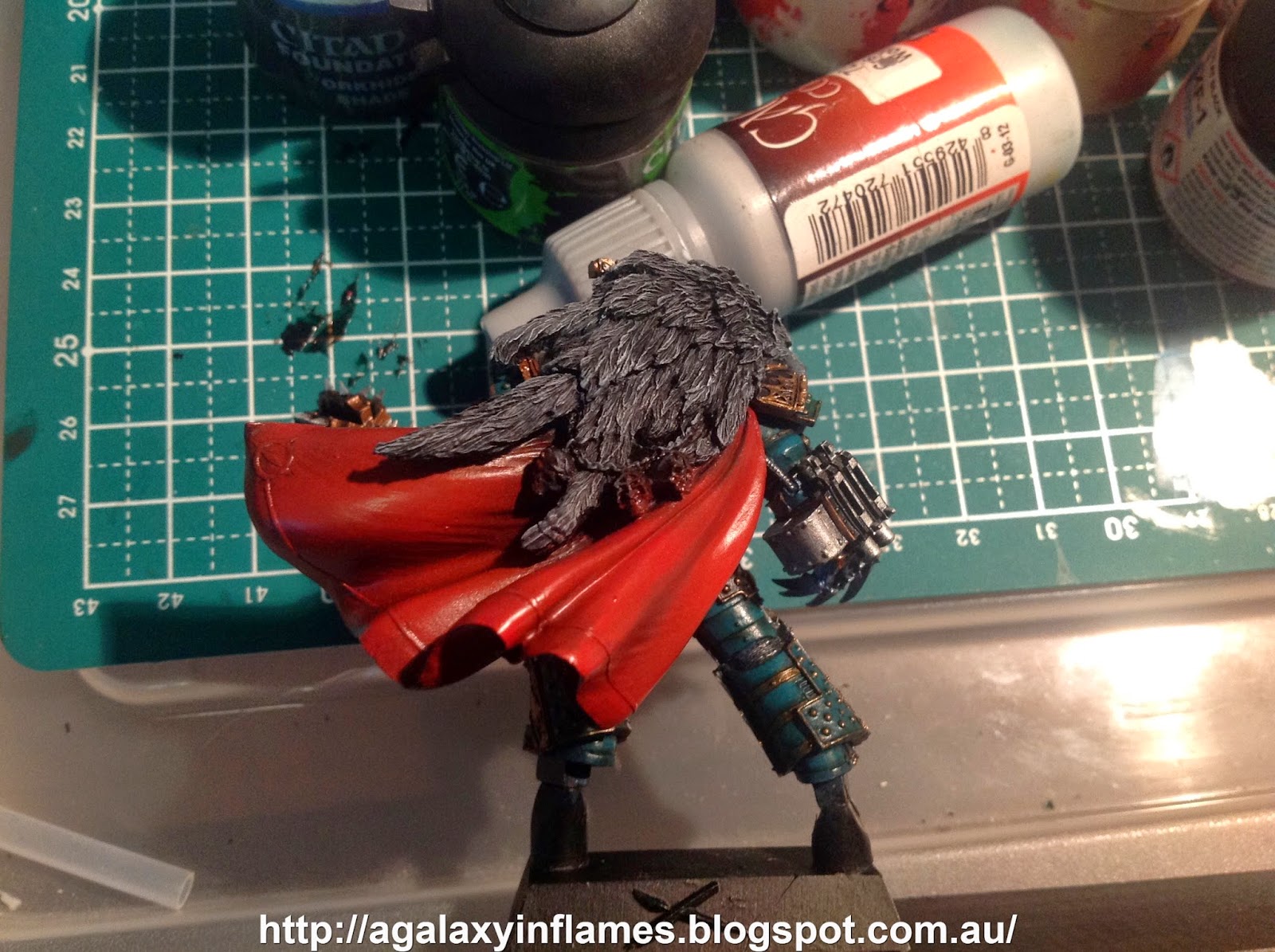 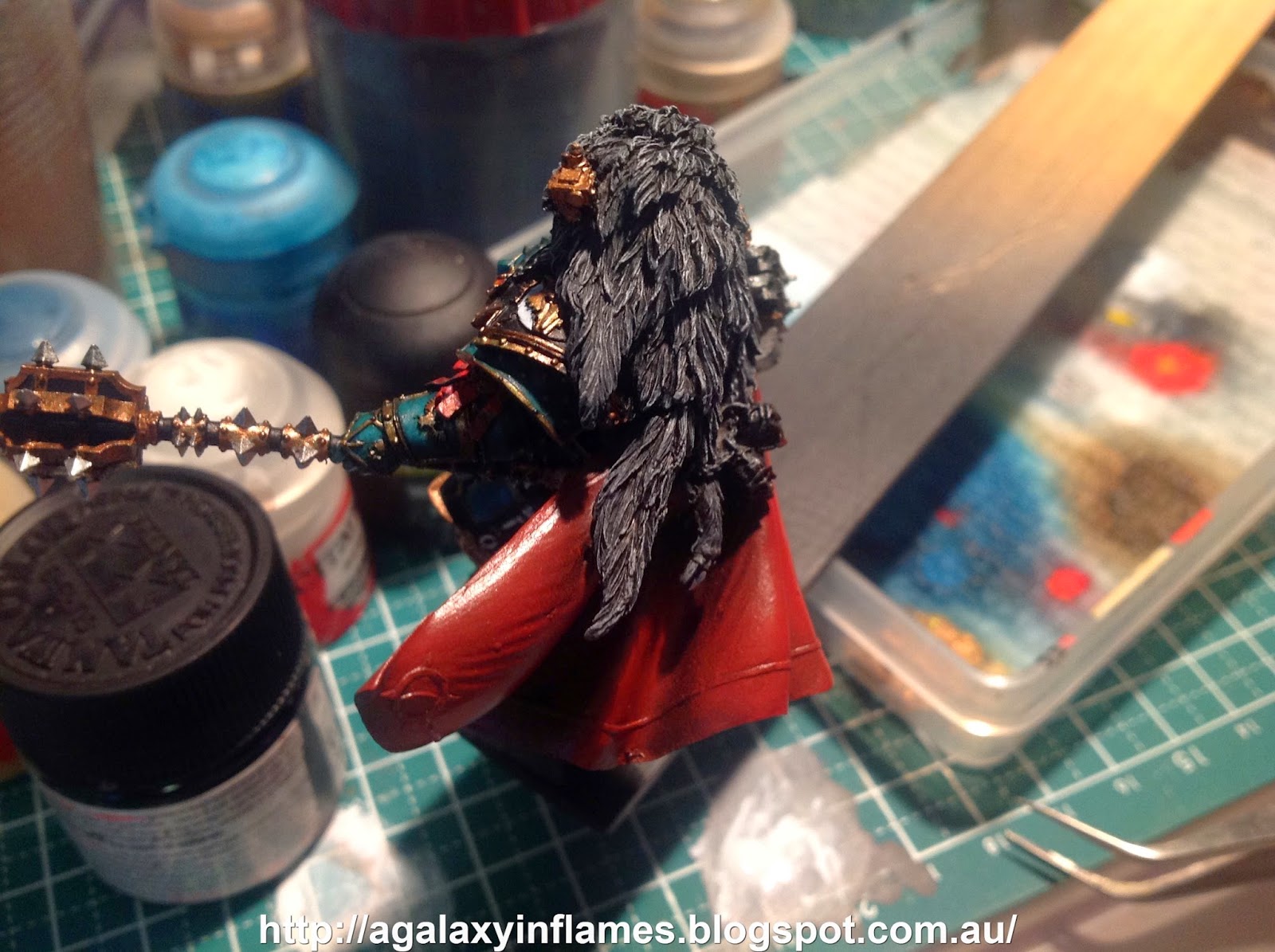 I also painted the face at this time, however, as I was wet-blending I had to move really fast, lest my paint dried, so I didn't take any WIP shots. I used only Elf Flesh and Ceramite White to do the face, in case you were wondering. 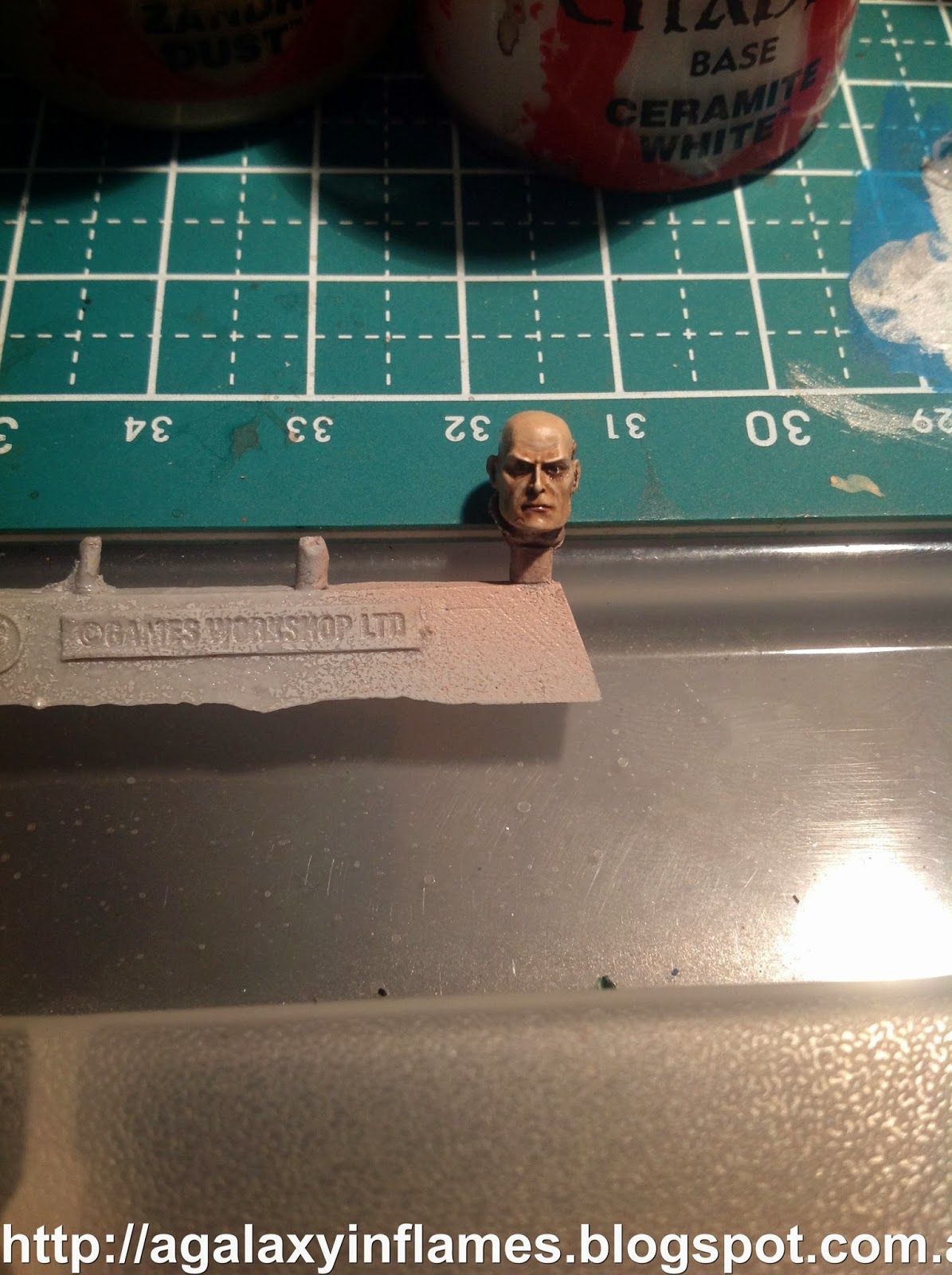 Ok, whilst you weren't looking, I attached Horus to his base. I mixed up a small amount of oil paint and No.1 medium, as you can see, this wouldn't even fill the underside of a 25mm round base. You can also see the small particles of oil in the mix as I was still mixing the oil at the time of taking this photo. The mix isn't strong, and you can tell by the speed of the colour fade. I simply then used an old fine detail brush to apply the wash all over. Now, when I say all over, I mean not like a dip or a kid with a tank brush, I mean I sat there for 45 minutes gently teasing the oil exactly into the locations I wanted it, namely all around the brasswork, the Pturges, and any exposed metal. 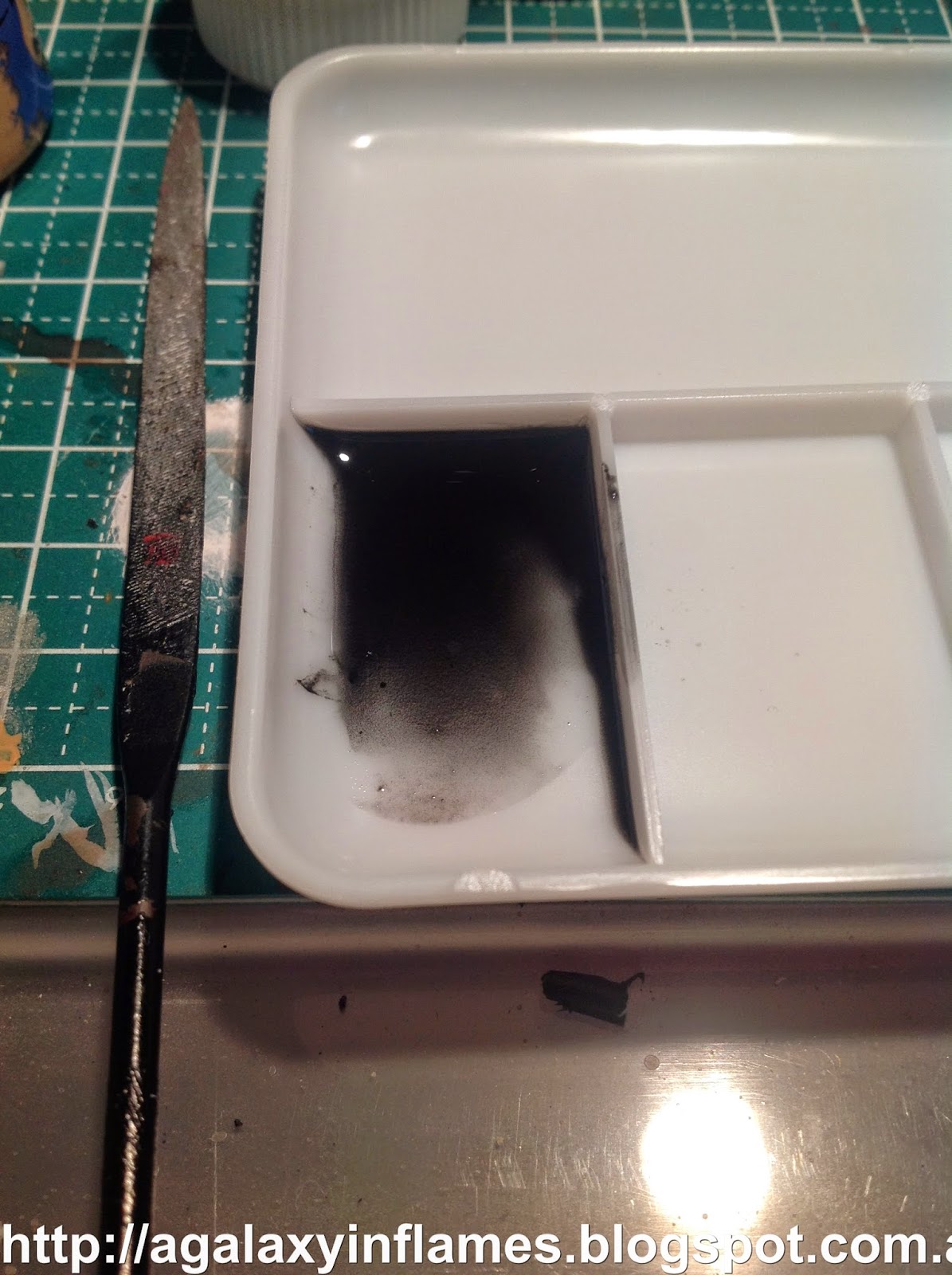 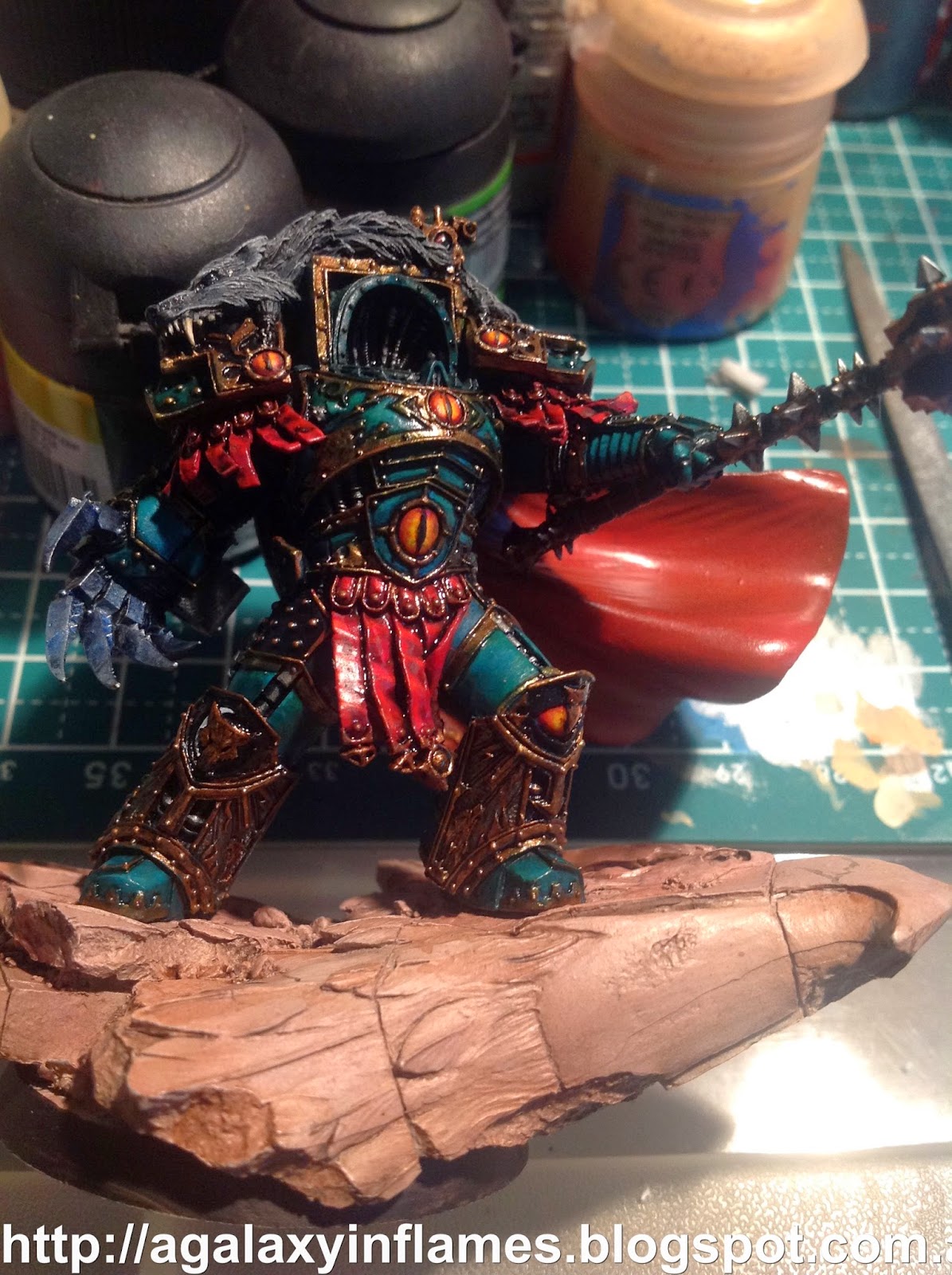 That's all, I have to give him 24 hours for the oils to dry, which means that the day after you see this, you'll get to see the finished model. Thanks as always for having a look, Macca
Posted by Unknown at 06:30