Today I will continue on with the Istvaan III table build with the road sections, which make up the majority of tiles on the completed project. With all the tile construction now completed, it was time to get stuck into the fun stuff of making some terrain and detail to the board itself.

I wanted the roads to have a feel of depth to them so that they didn't look stuck on, but still had a good amount of detail and damage done to them. I was stuck for what material to use for a while, but stumbled across these: 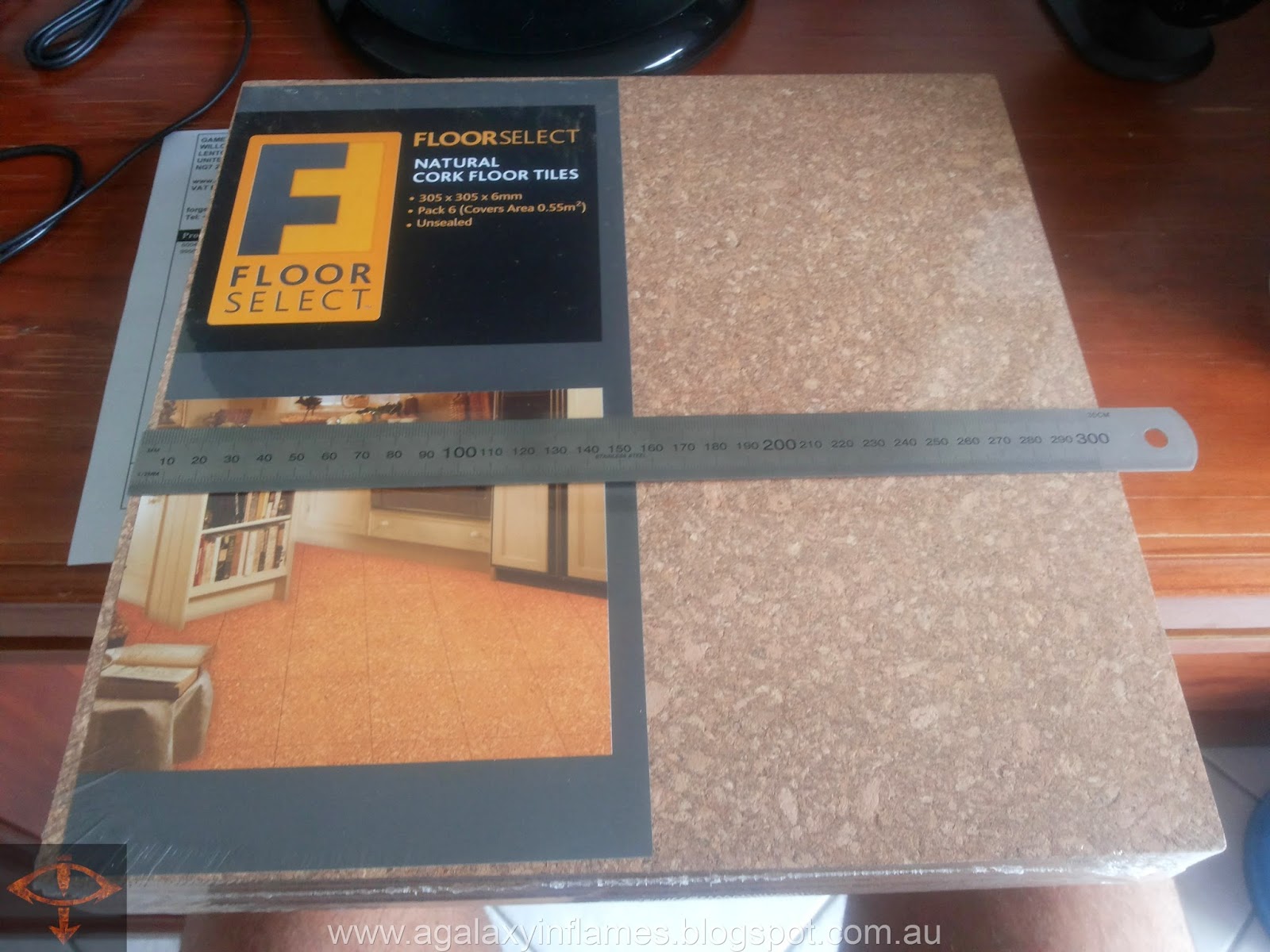 The cork board comes in 1'x1' squares and you get six in a pack. Bargain! The cork can not only be cut to size relatively easily, but it can also be battle damaged by grabbing some pliers and tearing out chunks of cork for blast effects and other types of damage.
I wanted to have the roads bordered by a concrete pathway or strip of some kind. I had a look at resin kits and even looked at casting my own parts but in the end it was just too expensive for the size I needed to cover. I ended up using cheap sheets of small bathroom tiles, I just pulled the tiles off the webbing they come on and got the Dremel into the back of them to remove the backing glue. I turned them upside down to use the pattern the tile had to grip the webbing. Turned out to be a good option at $6AUD per one square foot of bathroom tile!

I also wanted each road section to be fully compatible with all other tiles so there could be no materials hanging over the edge of the tiles as this would result in an uneven join and would weaken the magnetic join. I got around this by making a jig with some plasticard and butting up other tiles giving me a perfect set area to work with:


I wanted to add a lot of detail to each tile, so rather than just cork and concrete strips, I divided the centre of the tile with a built in culvert housing a drain. This was made with two "I" sections of plasticard beside a single tube of plasticard, then covered with strips of checker plate or diamond plate to cover the culvert. This also enhanced the modelling side of things by creating more opportunity to change up tiles by having the pipes destroyed, the plates moved or even missing and damage to the road and pathway itself. I ended up using plasticard strips to space out the bathroom tiles to break up the height and give it a different look. The idea is that these strips will be painted up in a rusty metal colour breaking up the colour and texture of the tile. 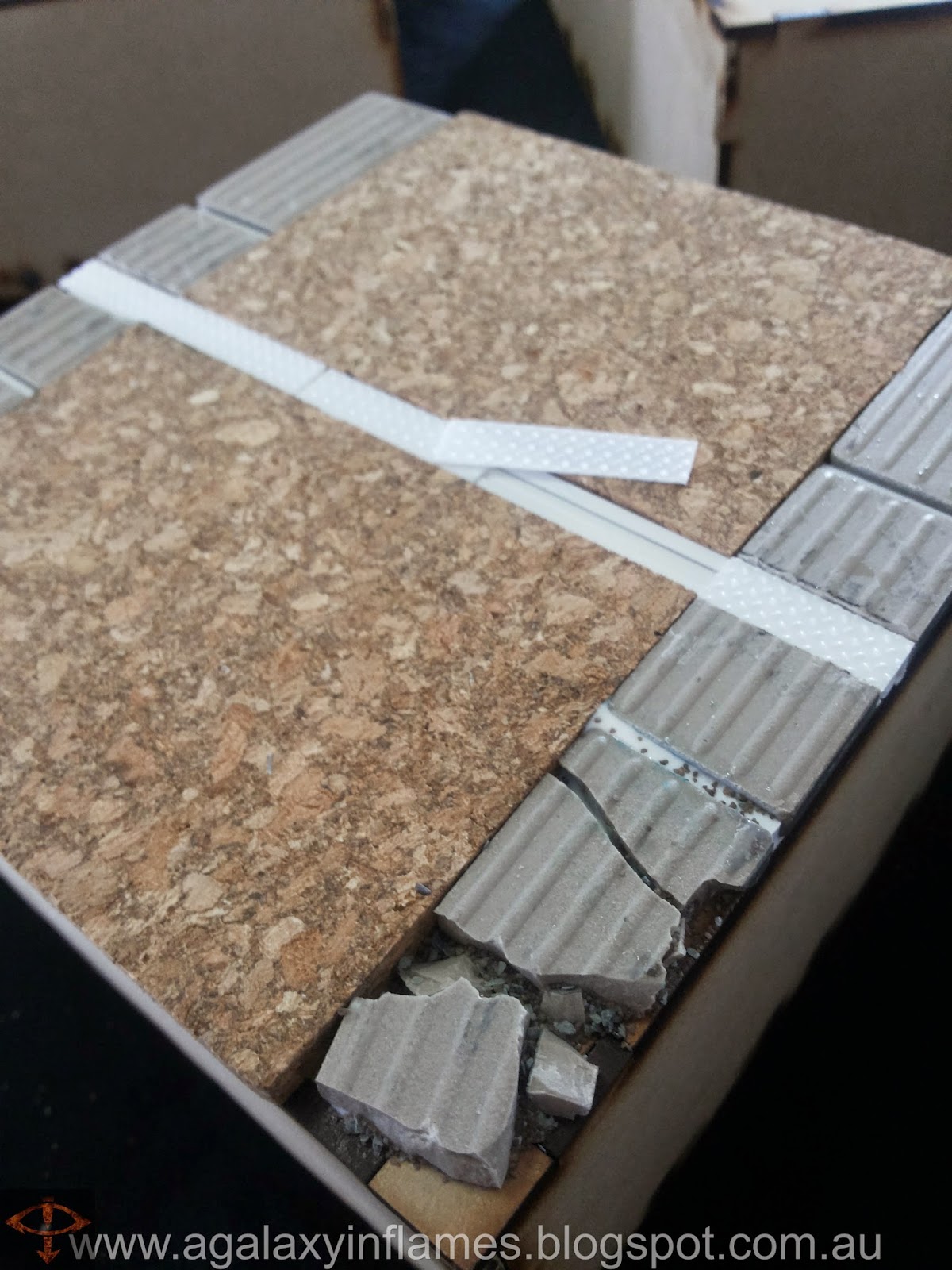 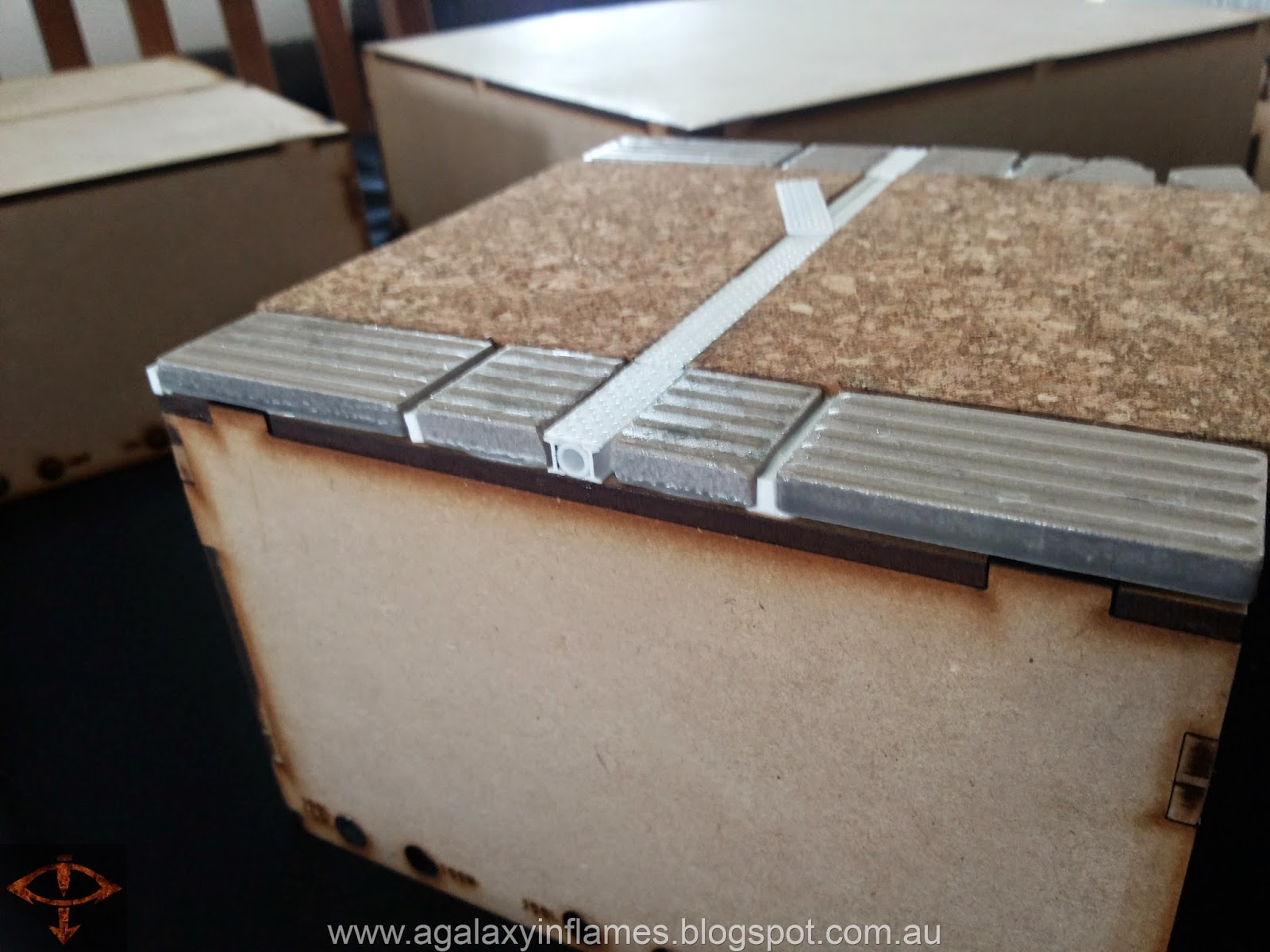 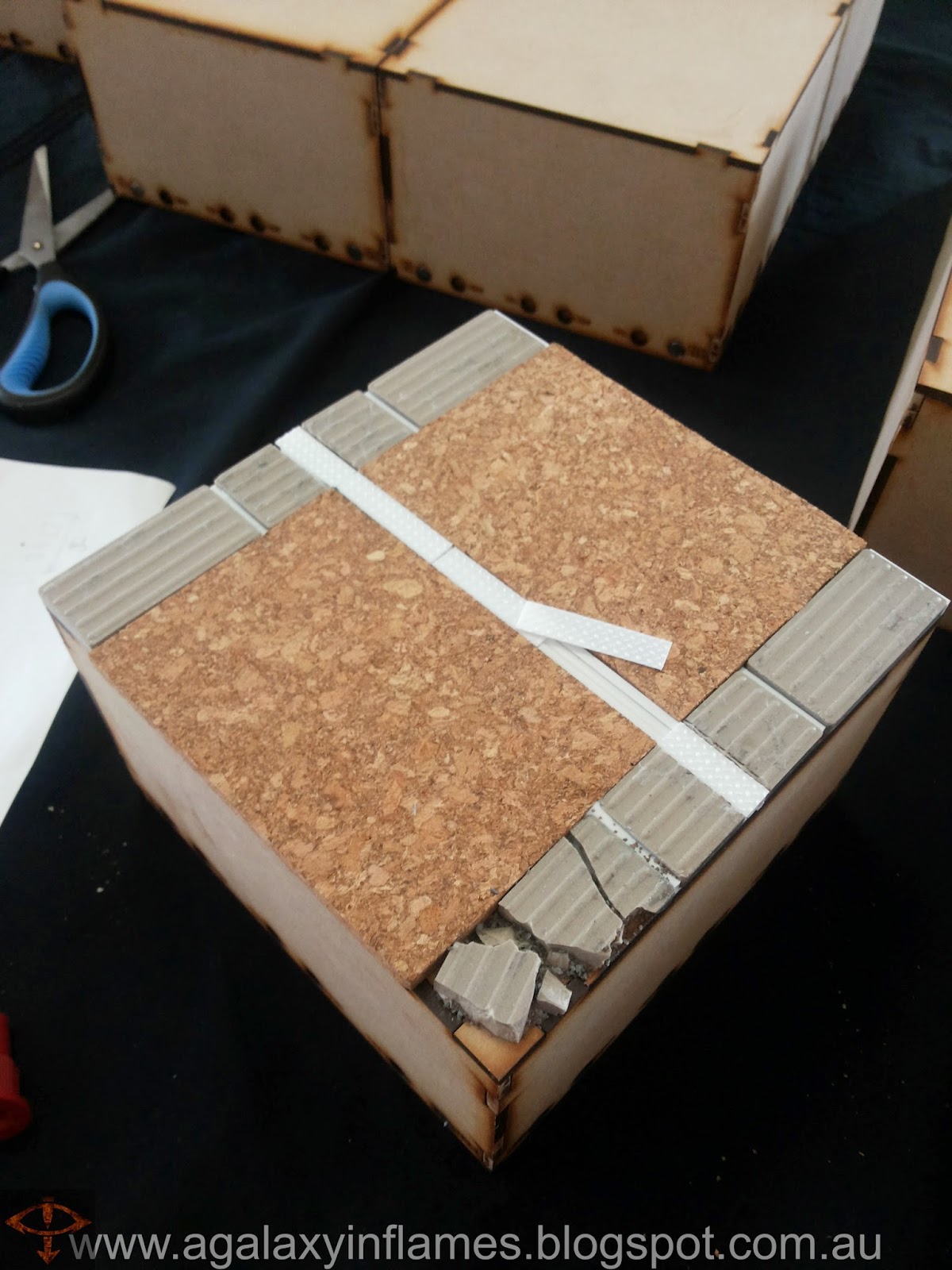 I then tried out the test tile with the other tiles to see how it looked. I am really happy with the overall effect with the cork and bathroom tiles and the added details of plasticard. Now that the I was happy with the test piece, it was time to mass produce! 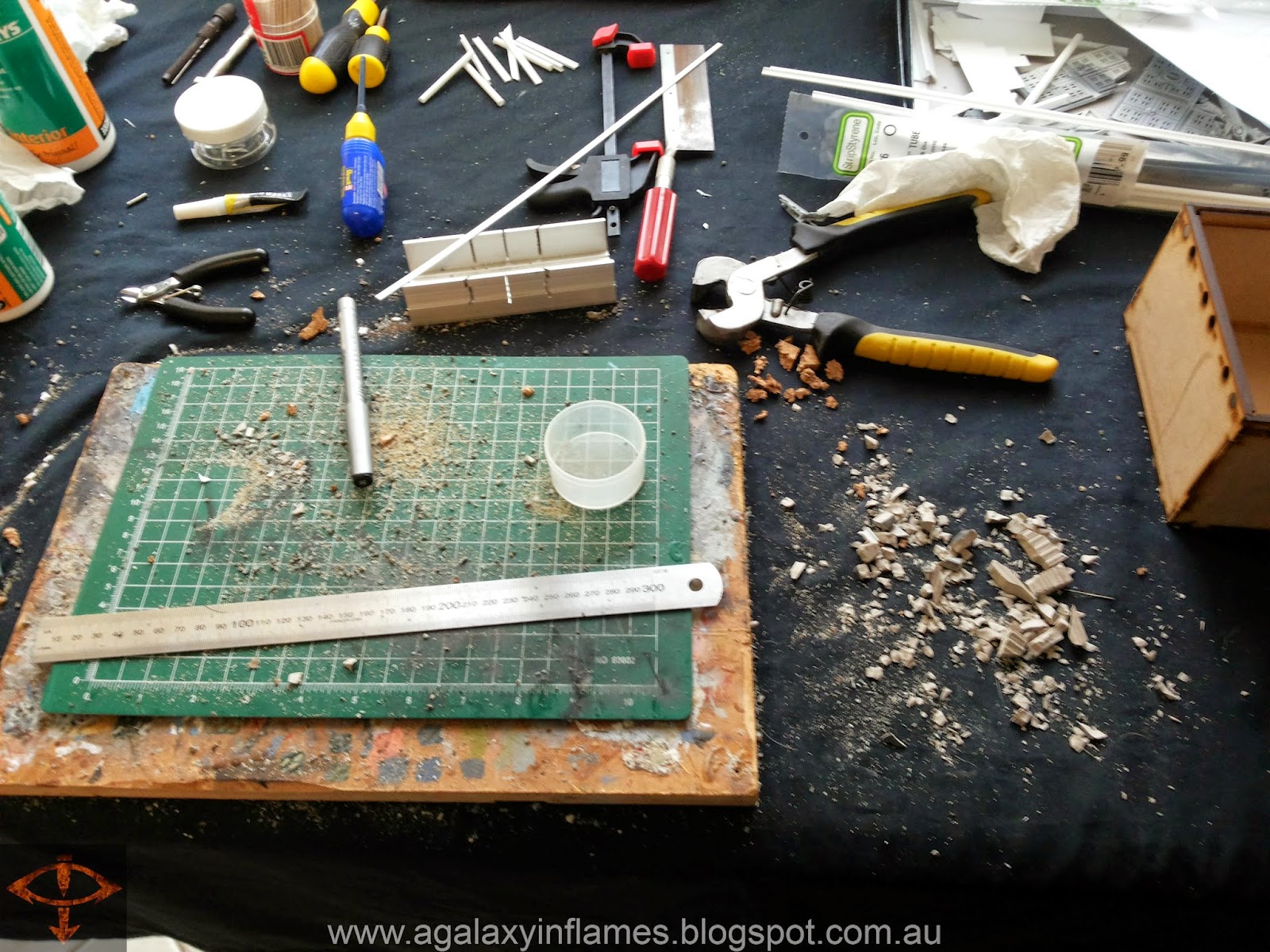 After I got bored of cutting a metric ton of plasticard, bathroom tile and plasticard I started to make the four "T" intersections that would frame the buildings.

Once mass production of parts was done and the templates for the tiles was decided, I laid everything out and started gluing it down onto the tiles, doing battle damage as I went.


I have got a few drains and manhole covers to go onto the road sections as well, they should really make the road sections pop with detail. Well, I best get cracking into the next post, covering off the first building to grace the Istvaan III table.

As always, comments and criticism is welcome!