40k:
So, there is the Battleforged 'Force Organisation Chart' (FOC), a more structured type of list, and the 'Unbound FOC', which is basically an 'anything goes' way of building lists. 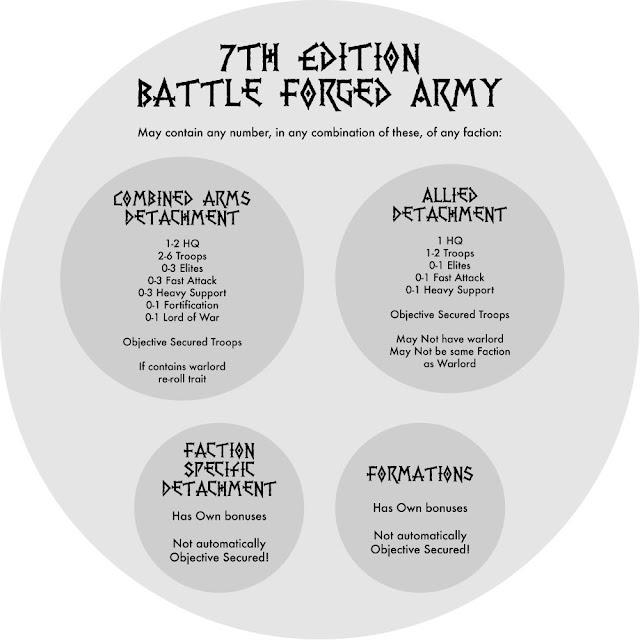 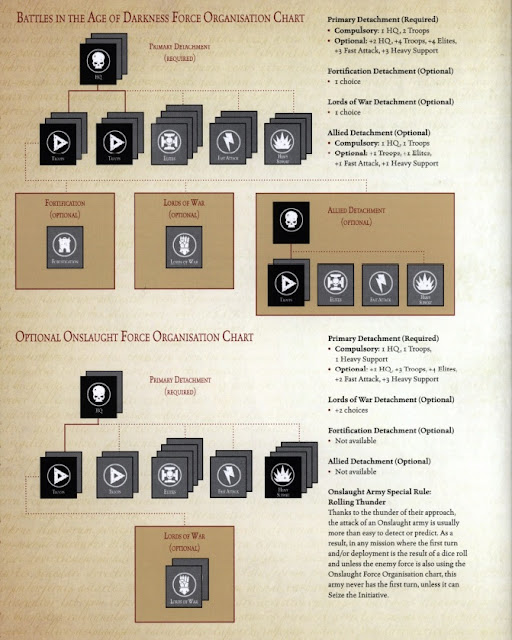 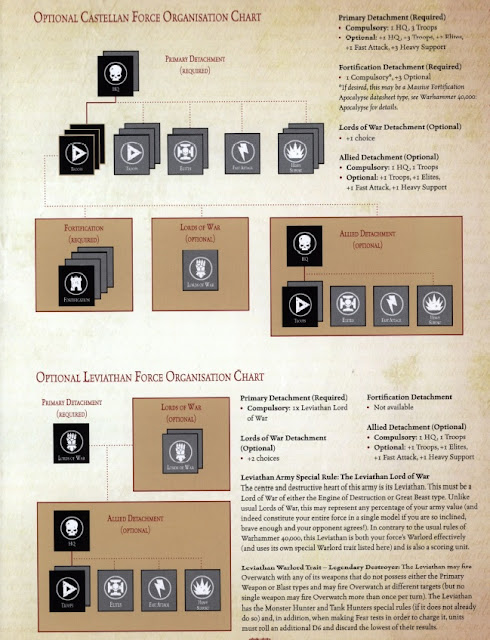 Battleforged: All of the Horus Heresy FOC's are Battleforged, however, the dedicated transports are not scoring, also, there is no bonus to being Battleforged, quite simply the FOC runs almost identically as to how it ran in 6th, Troops are scoring as well as units which have specific rules stating they do. That is all.

Legal?: Only the Battles in the Age of Darkness list is Legal. The other lists, as well as any modified by Rites of War, have to specifically be agreed upon by the opponent. If you rock up to your local FLGS with a Leviathan FOC with multiple Titans, the other guy probably has every right to be concerned, especially if he just wants a fun balanced game. Understanding this fact is why this is optional.

Rites of War are a special set of rules which add restrictions or modifications to an army which will change how they operate on the table, they are optional and must be agreed upon by both parties.

Unlike the 40k FOC's, the 30k player cannot deviate from the basic FOC without consent from the other player. This is in marked contrast to 40k, where Formations and Dataslates which outside of the FOC exist, and Unbound which doesn't use the FOC in the least. The key thing to take out of this is that in games of Horus Heresy, you have to follow stricter guidelines in order to play a game. 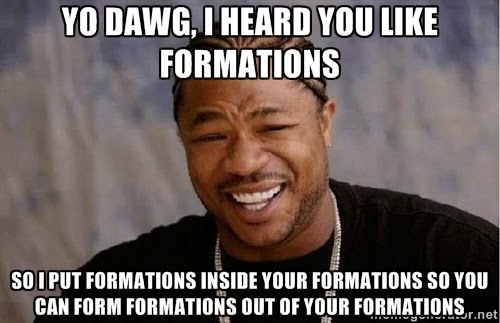 When setting out to create a list, there are a few ways to do it. In 40k, you select the Codex and go from there selecting any units you please. In 30k, the process is slightly more difficult.

Step 1: Select force, such as Legiones Astartes, Mechanicum, Solar Auxillia etc.
Step 2: Select the sub-rules, aka type of Legion, such as Salamanders, Iron Hands, or the Mechanicum Taghmata, Ordo Reductor etc.
Step 4: Apply special rules to the basic list (usually the addition of units, and the penalties of said force, such as a Raven Guard force not being able to take more vehicles than infantry units).
Step 5: Opponent Permission. If you seek to use an alternative FOC or a Rite of War, you must have permission. You must also still adhere to the restrictions of your parent force.
Step 6: Troop Selection. On average, there are only two units per force that count as compulsory troops. The rest of the troops section may only be selected AFTER the minimum requirement is met.
Step 7: Lord of War. Your lord of war cannot cost more than 25% of your total army points, nor can one be selected at all below 2000 points, subject to the Leviathan FOC or a Knight Household.
Step 8: Game on.

As you can see, the force is severely restricted. For 40k T.O's, please take note, that although there are 10-man plasma teams in the troops section, those units won't see play until a minimum best case scenario of 300 points has already been spent on compulsory troops.

LOW POINTS GAMES AND THE DIFFICULTIES WITHIN:

A low points game for the Horus Heresy is basically anything below 2000 points. The game is balanced for around 2500, and costed accordingly. In a 1000 point game, for example, there are some massive ouch-zones for a Legion player, as an example.

1: HQ. The HQ will take up a minimum of 50 points bare bones. If you want to arm them with something more than their fists or upgrade them, you will likely end up somewhere in the 100-150 points region.
2: Troops. The troops will set you back a minimum of 300 points for two basic 10-man tactical squads. These units have no anti-tank capability beyond krak grenades due to a lack of special and heavy weapons, they also lack ATSKNF, the lynchpin of 40k marines.
3: Times to spend! However, due to the specialised nature of 30k units, the units in your remaining 550 points must provide some form of: anti-Terminator equiv, anti-tank and anti-flier. If you take one unit for each (since most units are highly specialised this, will more often than not, happen) you will be looking at surprisingly low numbers on the field. This means that it's not only easy to lose said unit, but that if you do, you have lost the capability for your to deal with the threat type that unit catered to.
4: Transportation: Drop pods? Outside of a Rite of War or a special character, NOPE. The best you can hope for is Rhinos or a Dreadclaw, so enjoy spending fuck-huge points on delivery systems in a low-points game.

For a low points game, there are only 3 truly competitive lists when compared to 40k, the Knightly Households, banned in most tournaments anyway, Solar Auxillia with their Special Character Jerky McRespawn, and the Mechanicum, utilising some very specific builds, namely dependent on Myrmidons and Castellax with cheap scoring units courtesy of Tech Thralls. If you are playing a low-points game, I strongly advise you to avoid special characters, Rites of War and the Mechanicum I mean, uh, go robots!

WHAT ABOUT THE MISSIONS?
In 30k the missions do not come from the 40k Basic Rule Book (BRB), instead being selected from a host of available 30k missions, usually revolving around notable campaigns of the Heresy. There are no Maelstrom of War missions, no Relic, instead the scenarios focus on a narrative list of objectives and can be incredibly enjoyable and tense. The missions have a lot of character about them, and many include penalties for deviating too far from the 'desired forces'. This is not a negative, as a penalty like "+1 VP for every Super Heavy destroyed" won't have a major impact until the douchebag with the 4 Imperial Knight list rocks up. Again, I stress there are a host of missions to chose from, and that Imperial Knight player will find plenty of missions designed just for him and his Battle Throbby.

Well, in 40k circles, for time eternal there has been a distrust of Forge World, due to several balls to the wall rulebooks and units, such as the Imperial Armour Armoured Company List (beasthunter rounds vanquisher HQ's could all but table Tyranid armies by turn 2 with some good shooting), Basilisk emplacements, anything to do with Necrons (nobody can make those fuckers balanced) and several niche units.

On the whole however, Forge World seems to have done a good job, and compared to some of GW's offerings and their over-reliance on making obvious Walkers into Monstrous Creatures, it's pretty hard to call Forge World pay-to-win or broken. When looking at the Eldar and Necron codexes, especially with their formations, I can only draw the conclusion that in fact, 40k itself has become the pay-to-win unbalanced cheese daemon from hell.

I think it's about time that the resistance to Forge World as a whole is ended, not just for 30k, but for many units designed for 40k. There is simply too much awesome there to contain.

We are not here to debate the superior system. Rather, we are here to discuss what the difference is between the Horus Heresy and regular 40k. I hope that in some way, this helps to reassure people about 30k. If you're a 40k T.O and you're unsure about allowing a 30k list into your games, please, feel free to ask anyone here at the blog and we will happily go over the list and critique it for you, as well as explaining how it works. We want to encourage people to play this hobby, even if it is only as 40k vs 30k, at least it will spread the word that there is a great and balanced game in the 40k universe.