Today we have a special guest post from a long time friend, Deano, who has done up a book review of the very first of the HH novels, Horus Rising. Although this novel has been out for a while, it ages well and this review still serves good for those looking to get into the heresy world - it will certainly leave a hook in and leave you for want of more.


The Spark of Heresy

By way of introduction, my name is Deano and I share the uncontrollably rampant resin addiction that infects my fellow friends in the AGIF crew. I've been in the hobby on and off for 15 years now, my brother and I first going halves in a third edition 40k starter set a few weeks before the Sydney Olympics at the turn of the millennium. When you compare this to the preserved Space Crusade box sitting in Keepy's hobby cupboard and Spraggy's war stories of "genestealer cults" in the "Rogue Trader days," it goes without saying that I am betraying my age (mostly the sheer lack of it) in comparison to these long fanged (and tea addicted!) veterans.

However, my enthusiasm for the hobby was massively revived at the tail end of 5th edition. Throughout the process of moving to the far north in 2011 and integrating into the local hobby community, I individually met what would later become the AGIF crew, both past and present
contributors, and I've been having a blast with the boys and girls in the hobby ever since.

Although I'm now re-discovering my painting and modelling groove thanks to Outer Circle blogger Macca and continued tuition from Dice Wizard and Keepy, my main strength in this hobby has always been in the setting. I simply love it. When the opportunity presented itself for me to bring something new as a guest feature to the blog, I jumped at it by taking us back to the spark that reignited interest in Horus Heresy setting and started us all down this crazy, resin addicted path:

Most, if not all Warhammer 40k players at some point would have heard about the Horus Heresy. Considering that the fluff (fluff being the colloquial reference for the setting background for those new to the hobby) is written predominantly from the Imperium's perspective, we know that the Horus Heresy was a cataclysmically defining moment in the grim dark setting of Warhammer 40k. It is the reason why the Imperium operates as it does from the organisation of the Space Marine Chapters to the Emperor's internment in the Golden Throne. Throughout the rule book and every Imperial or Chaos aligned codex, there is reference to the Horus Heresy and as a result there is no shortage of answers as to what happened:

The purpose of the Horus Heresy novel series however is to tell us how it happened. And it all starts with Horus Rising.... 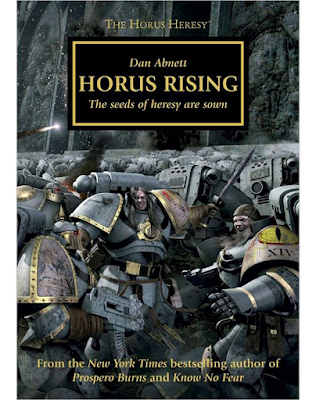 ' But the Luna Wolves, ah me, the Luna Wolves. Sigismund, in a straight fight? Do you really think you'd have a hope? Honestly? Your yellow ragamuffins against the best of the best?'
Sigismund laughed. 'Whatever helps you sleep Captain Tarik. Terra bless us all it is a paradigm that will never be tested...'

Two Hundred years since its commencement, the Great Crusade crashes onwards in its conquest of the Milky Way galaxy and, world by conquered world, the Imperium of Man has reached its Golden Age in both power and innovation. With the largest Ork Empire in history broken at the triumph at Ullanor and few powers left to be of great threat, the Emperor of Mankind surprises all by retiring from the Great Crusade at its height to return to Terra. In his place he has nominated Horus, favored of his sons, as Warmaster to continue bringing enlightenment and unity to mankind. This is where the setting of Horus Rising begins, following the efforts of the Warmaster's 63rd Expeditionary Fleet and that of their accompanying Legion: the XVI, Luna Wolves.

The book itself is divided into three sub sections, each following a different compliancy (the Imperial term for conquest of a world) and is portrayed pre-dominantly from two main viewpoints: that of the battled hardened, Legio Astartes (Astartes being genetically modified human super soldiers) Captain Garviel Loken, and those of the human remembrancers; poets, artists and historians attached to the 63rd Expeditionary Fleet. In this respect, Dan Abnett brings the setting to life by comparing these two often polarised viewpoints against one another and we realise quickly that the 31st Millennium is a very different time to the bleak, desperate twilight ten thousand years to come.

With the central focus of the plot centered around the Luna Wolves, we get to see the Astartes operate as a Legion for the first time since the early days of Rogue Trader, and in expected fashion, they are particularly ruthless at their work. It’s not just a tactical squad or a hundred man company we're seeing ladies and gentlemen, we're seeing thousands of Astartes deployed at once. In some parts even tens of thousands! This again emphasises just how powerful the Imperium of Man has become throughout the 31st Millennium and reinforces that there is hope for the Imperium: something utterly alien in the grim dark setting we all know.

Through Loken's perspective we gain an understanding of the Luna Wolves and their beliefs: unshakeable loyalty, brotherhood and their sense of purpose in war. But, unlike many of his brothers, Loken also possesses traits rarely seen in an astartes: hope and curiosity. He is not afraid to question his place (or the place of others) in the greater picture and has a moral belief in his actions which gives the character a grounding, human quality. He sees the Great Crusade and the Legiones Astartes as a necessary evil because it contributes to a greater purpose: a viewpoint that is often criticised by the human Remembrancers who accompany him. This contrast is consistently well written throughout the book and is important in highlighting that although Loken possesses human qualities, he is still far from human in many ways. He was not raised to be human as they were and it shows in how both see the Great Crusade through different eyes.

As I mentioned earlier, most people familiar with 40k know Horus to be the ultimate bad guy: the favored son who turned on the Emperor with half of his brothers and, apologies for putting it so bluntly, screwing the Imperium up beyond recovery. The Horus we see however is very different to the often one dimensional villain the 40k codexes make him to be: he is both a demi-god of awe and strikingly human at the same time, even from the perspective of the Astartes who are not human themselves. Powerful, ambitious, intelligent. Such is his charisma that an entire Expeditionary Fleet would follow him to certain death if he asked it of them.

God-like qualities aside, Horus also demonstrates a high degree of compassion which we see in his interactions with Loken. He is also not without his own doubts, fully acknowledging that he does not have all the answers but seems to take these in stride. This balance between human and demi-god makes Horus a likeable, if not loved character and we begin to understand the gravitas of why half of the legions sided with him when the Heresy came to be. The Horus Heresy now seems more of a Shakespearean Tragedy opposed to the Biblical portrayal of a Satan-like character which, in this reviewer's opinion, is a very good thing.

As for the compliances themselves, each battle is dynamically varied ranging from static, urban warfare against conventional human forces of Planet Sixty Three Nineteen to the alien swarms of the Megarachnids on the planet fittingly dubbed "Murder." Dan Abnett, who is no stranger to writing different battlefields in his ongoing series Gaunt's Ghosts, again plays to his strengths in making each engagement unique with its own challenges for the Luna Wolves to overcome. But, the Luna Wolves don't receive all the credit: the featured allied Legions, as well as their primarchs, also receive their due spotlight and feel different enough from the Luna Wolves to bring their own character to the fight. If bolter porn is your preference, there is no shortage of it in this novel.

That is not to say that the book is without its minor flaws however. Pacing throughout the book becomes rather rushed throughout the later stages, giving me the impression that the author wanted to fit so much more in but was limited to a strict page count. The other big criticism of the book is that because it is written as part of a series, there are many instances of places and characters who are introduced and present something exciting, but are then cut short or disappear from the novel entirely before such can be explored. Naturally, this is not necessarily a bad thing because it means that these characters and arcs will be expanded upon in future novels... but from a stand-alone novel perspective, it can be frustrating to some readers. Horus Rising is most definitely setting up the stage for what is now known as the Istvaan story arc, but sometimes people want more than just the stage. If you find yourself in that category, this book as a stand-alone may disappoint you somewhat.

Although not generation changing such as the likes of Tolkien, Horus Rising did its job in paving the way forward for the Horus Heresy to rise. I know that it was one of the reasons Keepy chose the XVIth Legion for example and I'm sure others were influenced by it also. From the way the book is written it opens the door to those both new to the hobby as well as throwing in enough references to appeal to the long-toothed veterans of the 40k setting. I give the book an 8 out of 10 and definitely recommend it as one of Black Libraries better works.

It was a pleasure bringing this to you and I hope you enjoyed the read. Now, if you excuse me, I believe the Tyrant of Badab is calling me....