G'day, Macca here with a quick battle report between the Alpha Legion and Raven Guard. This is an over 2000 point game, and was incredibly fun and funny. Be warned, it's a long one because it's full of pics. So, lets get on with is shall we? 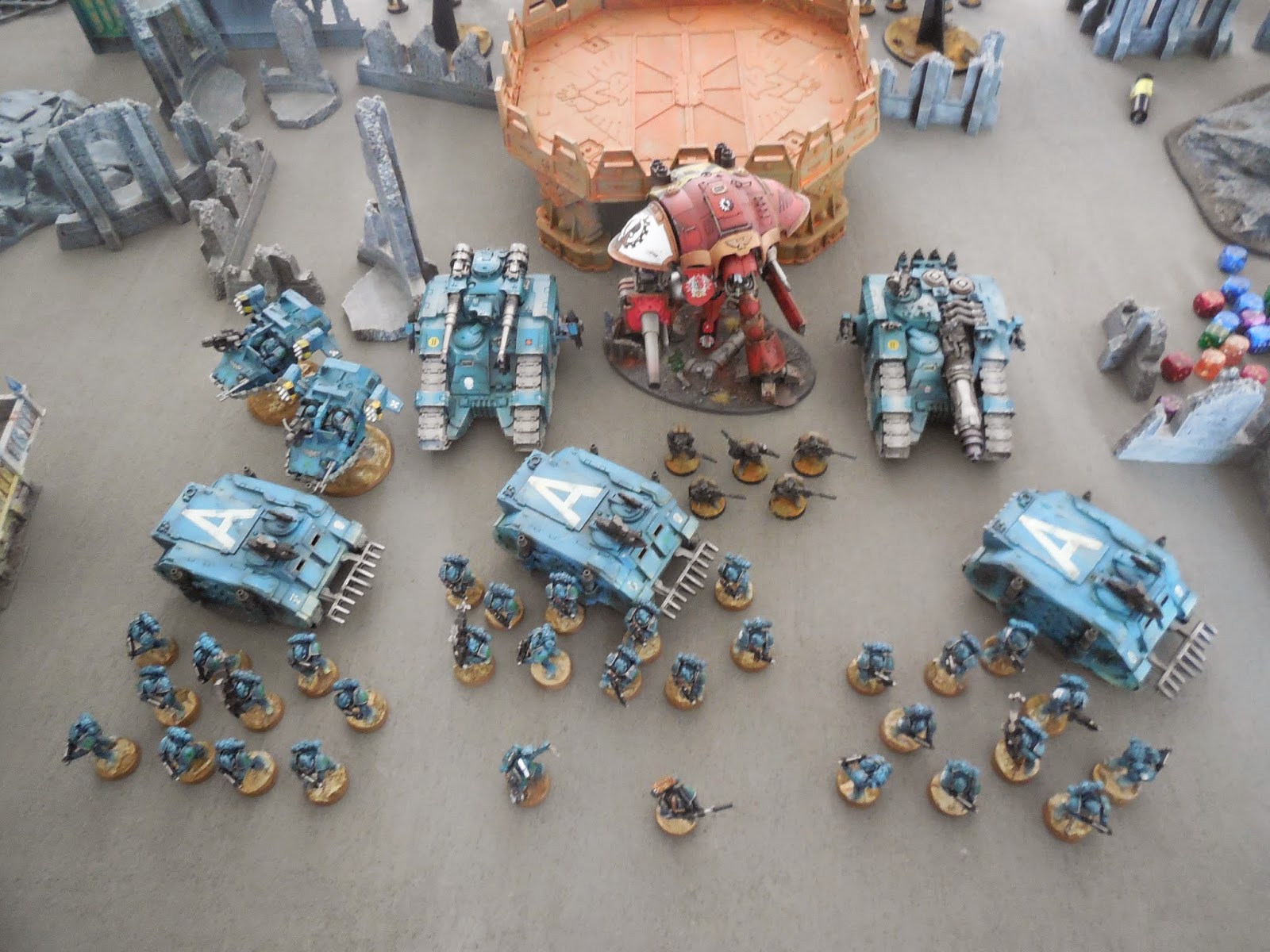 The Alpha Legion force is a veteran one, with a Praetor, Exodus, 3 squads of veterans in rhinos with havok launchers, a Legion Recon Squad in carapace, a Land Speeder squadron with havoks and multi-meltas, a Sicarian and a Sicarian Venator. To cap off the force, an Imperial Knight Paladin took to the field. 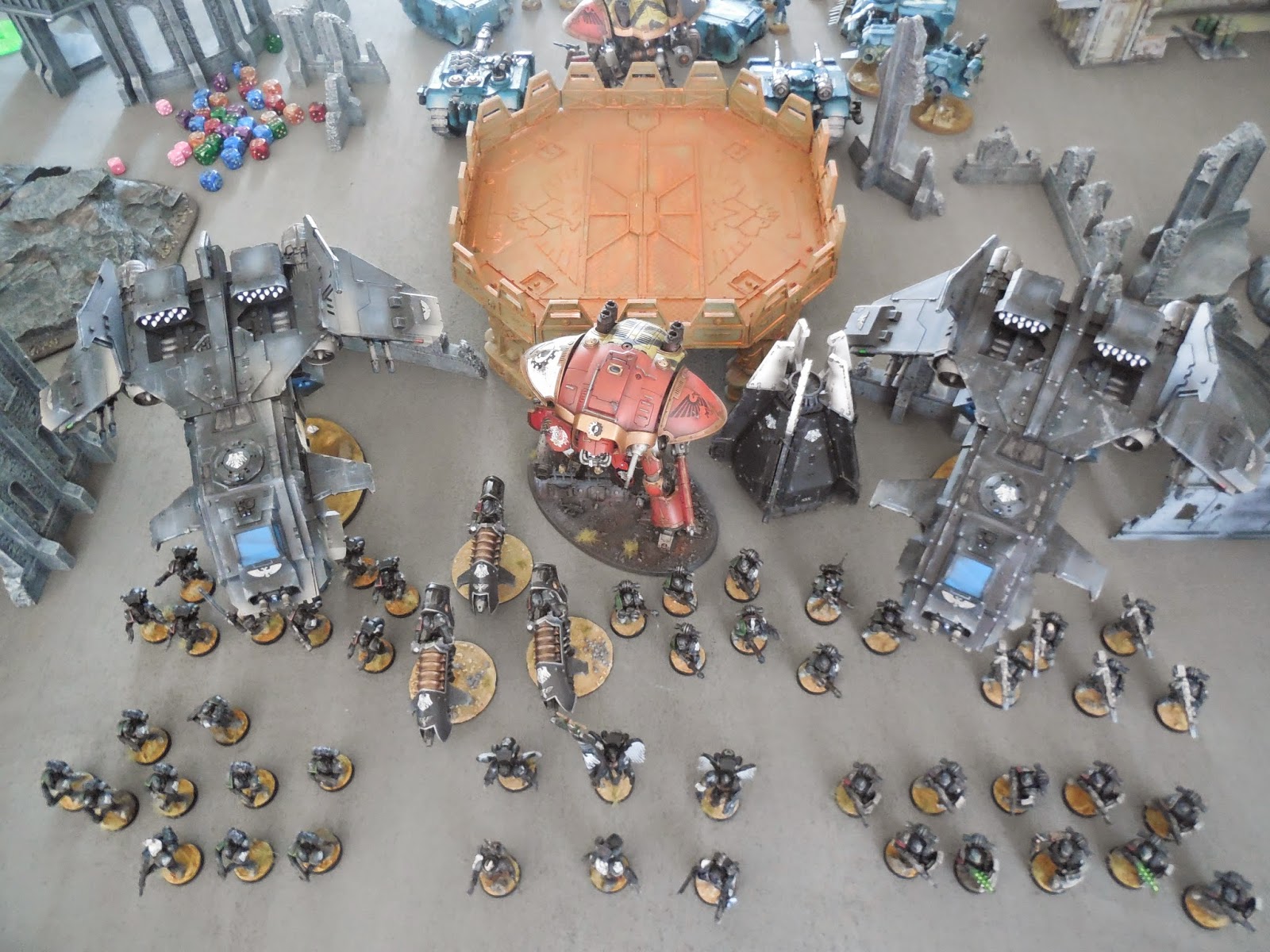 The Raven Guard force is a high-speed army. The force contained Strike Captain Alvarex Maun, a Praetor with jump pack and lighting claws backed by a command squad, Apothecary, a Tactical Squad, a Tactical Support Squad with Volkites in a drop pod, a Breacher squad with two graviton guns, a full Legion Destroyer squad with Rad missile launchers, a jetbike squad, lascannon devestator squad and a pair of Storm Eagles. Of course, an Errant Knight backs the powerful force. 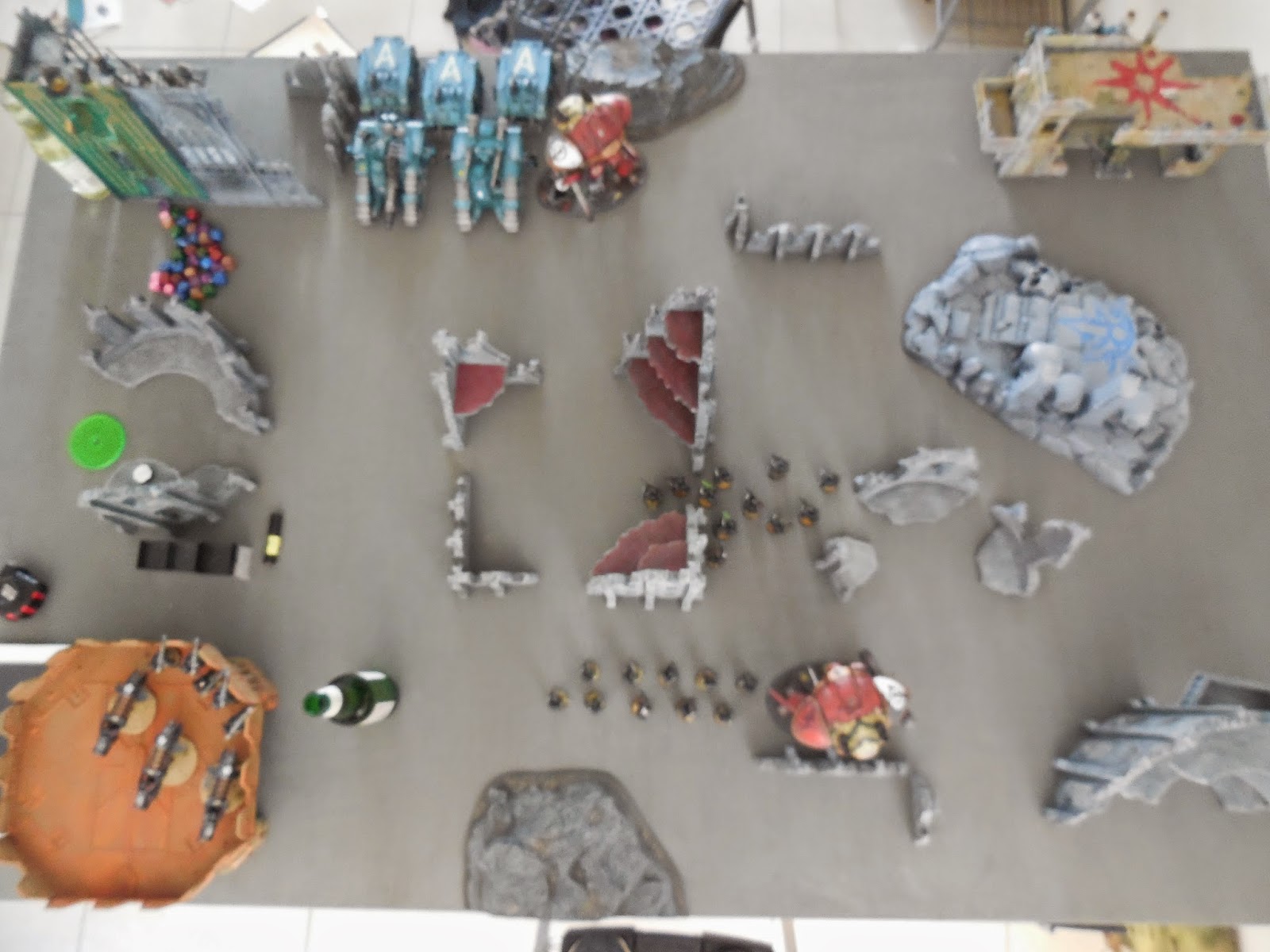 The deployment was simple, the mission played was Legendary Mission: Deliverance from Book III. The mission revolves around the Raven Guard extraction from Istvaan V. The special rules involved victory points for killing named characters, bonus points for killing units in close combat, and killing primarchs. This rule was modified for Imperial Knights. For the traitors, any unit wiped out immediately goes into ongoing reserves! Yes, that's right, infinite traitors, or in this case, closet loyalists. From turn two, the Raven Guard roll a D6. on a roll equal to the turn number or less, the random length begins, and the opponent makes a secret D3 dice roll. This determines the remaining game turns, and keeps the loyalist on edge.

Cat deployed conservatively, with the Alpha Legion grouped together in case of my infiltrating shenanigans (Raven Guard lolz). For the Raven Guard, I chose to infiltrate very little, namely the breachers with Alvarex Maun. Keeping in mind my stealth rule on all my foot troops, I tried to use the large areas of cover to block line of sight where possible. 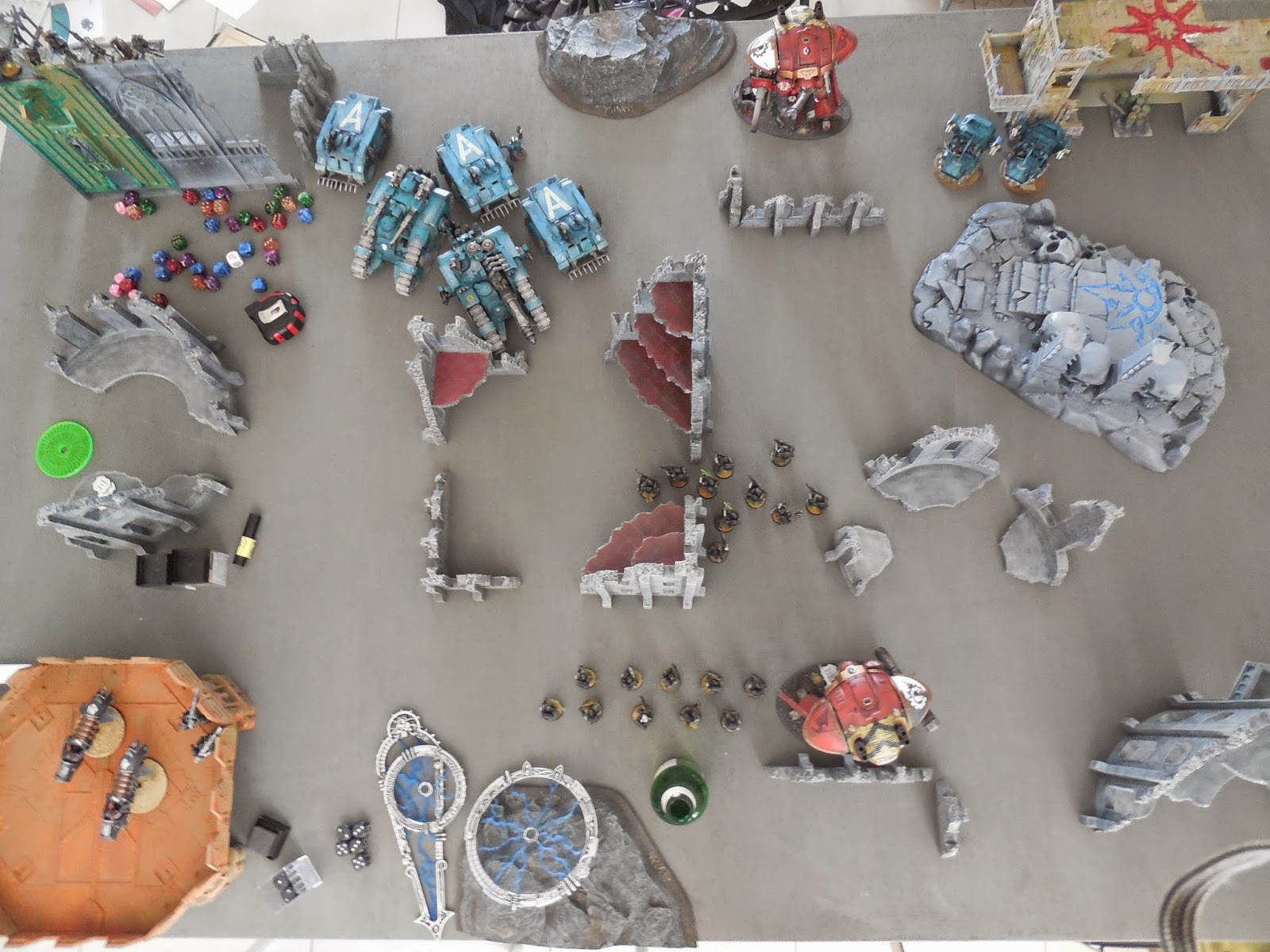 The closet loyalist force moved forward, the sicarians providing a wall of mobile cover with their tough av13 hulls. Cat quickly used Exodus (the Alpha Legion special sniper) to wipe most of my lascannons (3 failed saves on 7 sniper shots ><) followed by firing the Rapid Fire Battle Cannon from his knight into my jetbikes. To add to the pain, the Sicarian Venator pummled the Errant Knight, half killing it with the first shot! 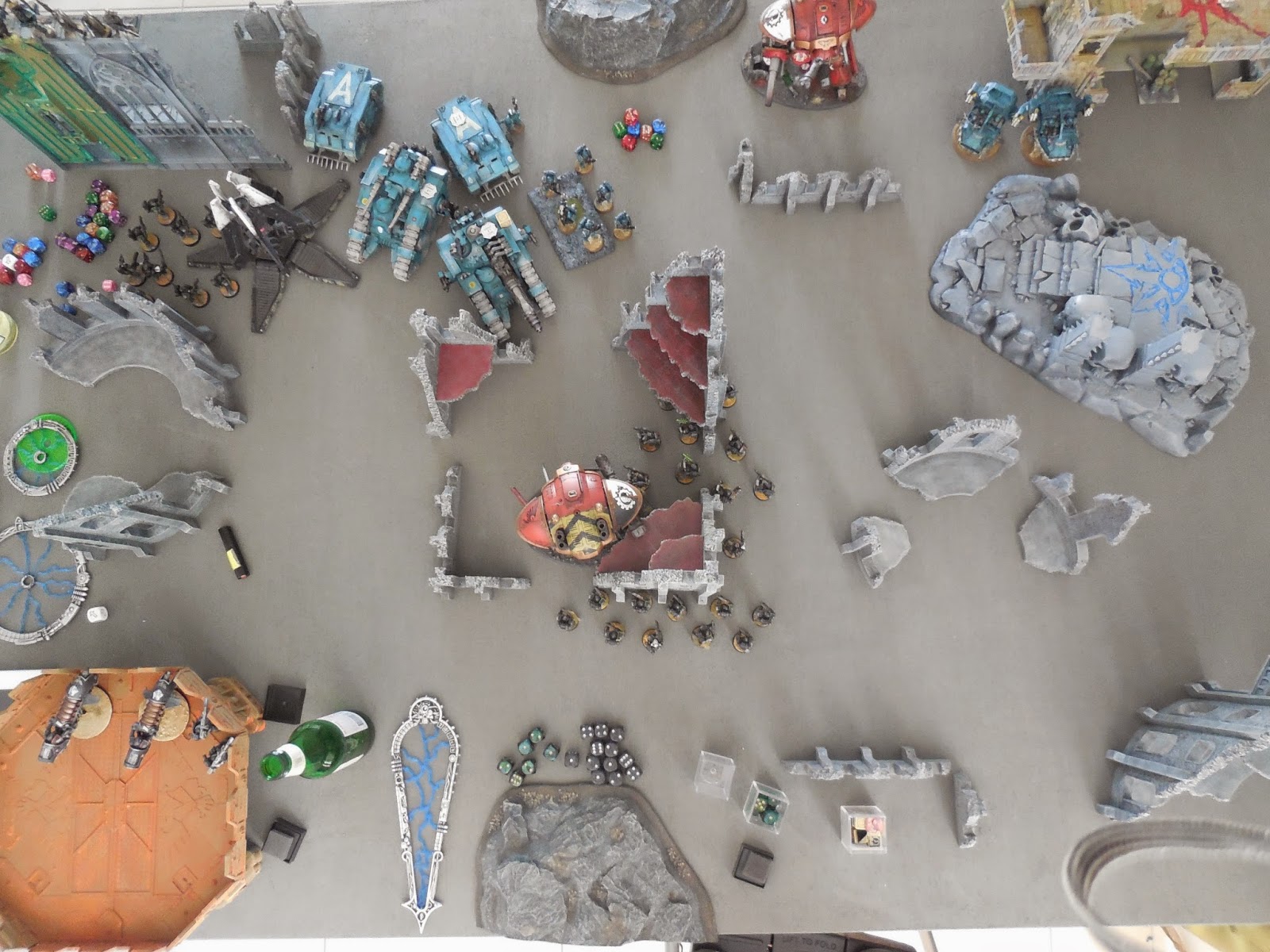 The Raven Guard response was simple, strike hard, rinse and repeat. I dropped my drop pod using it to block the armour from clear shots at my tac support squad, who opened up with thousands of volkite shots. When the smoke had cleared, Exodus was down two wounds and pissed off. My knight moved into the center, and working with the graviton guns of the breachers managed to kill a rhino and strip some hull points as well as shake the sicarians. 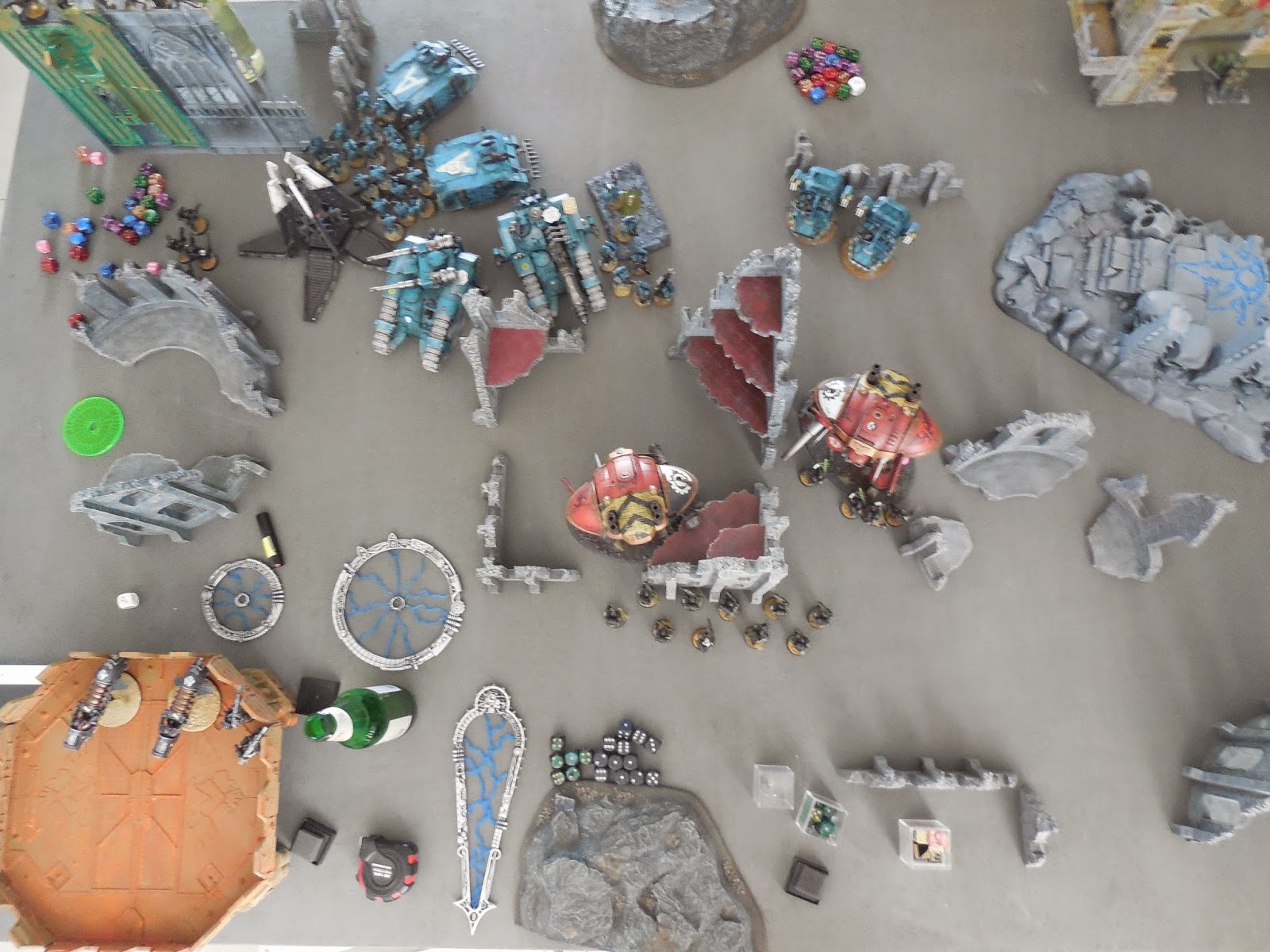 Carnage. The Alpha Legion moved up, with the marines piling out of their rhinos and devestating the volkite squad. The knight then charged into Alvarex's squad, killing most of them, whilst the rest of the army moved for vantage points. 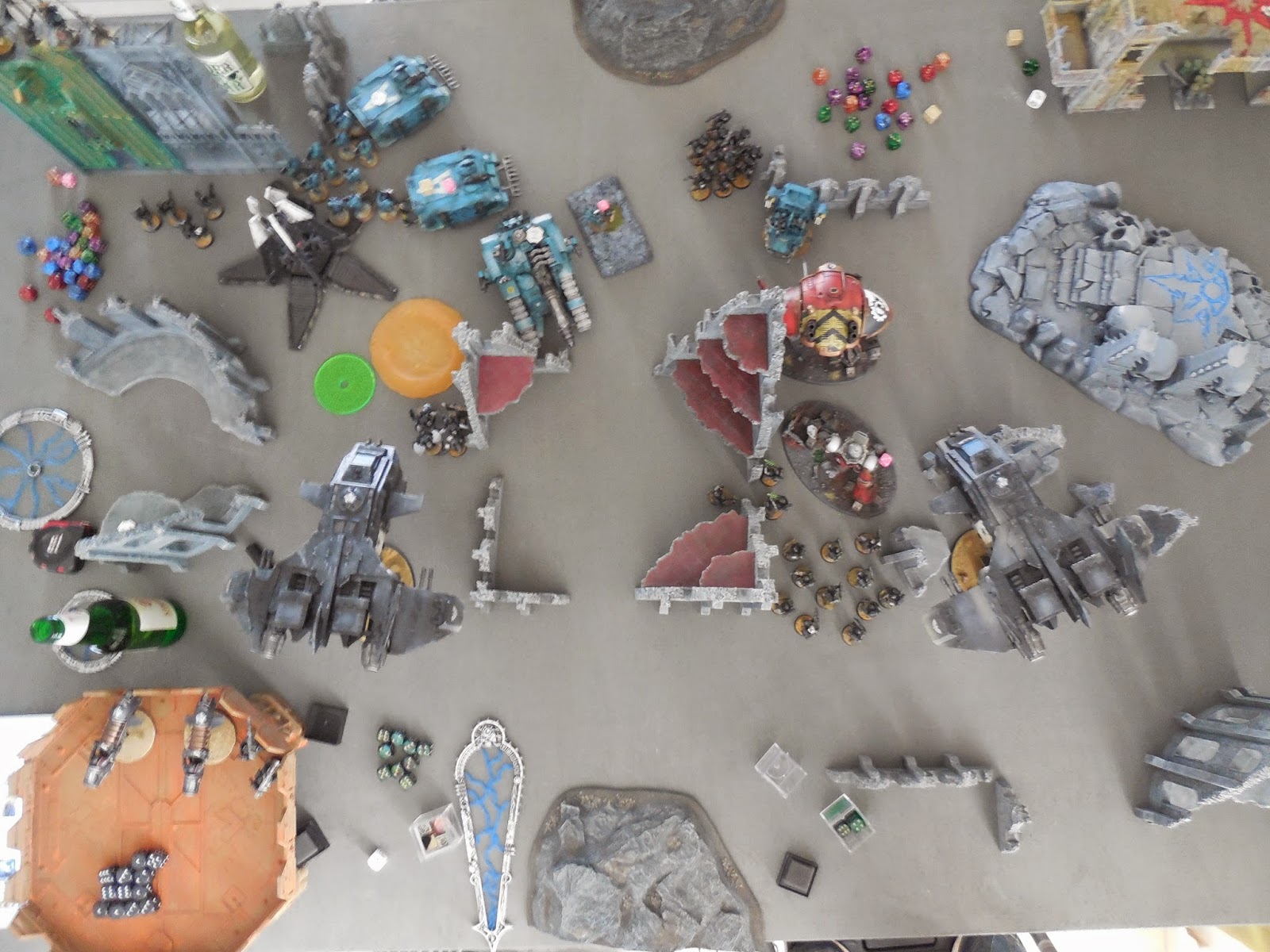 Conversely, the Raven Guard reinforcements arrived. Two storm eagles, the destroyers and the praetor and command squad came in. Thanks to Alvarex's special rules, I do not scatter deep strikers within 18" AND get to reroll failed reserves. The destroyers and Command squad landed bang on, and combined with the storm eagles managed to devastate armour and infantry alike. To finish my turn, the Errant Knight charged, and thanks to some very lucky rolls, saved Alvarex and co. from eing squashed as well as getting me a well needed VP.

As the turn ended, the Raven Guard were strong, however, with infinite reserves of manpower, the Alpha Legion would be no push over. 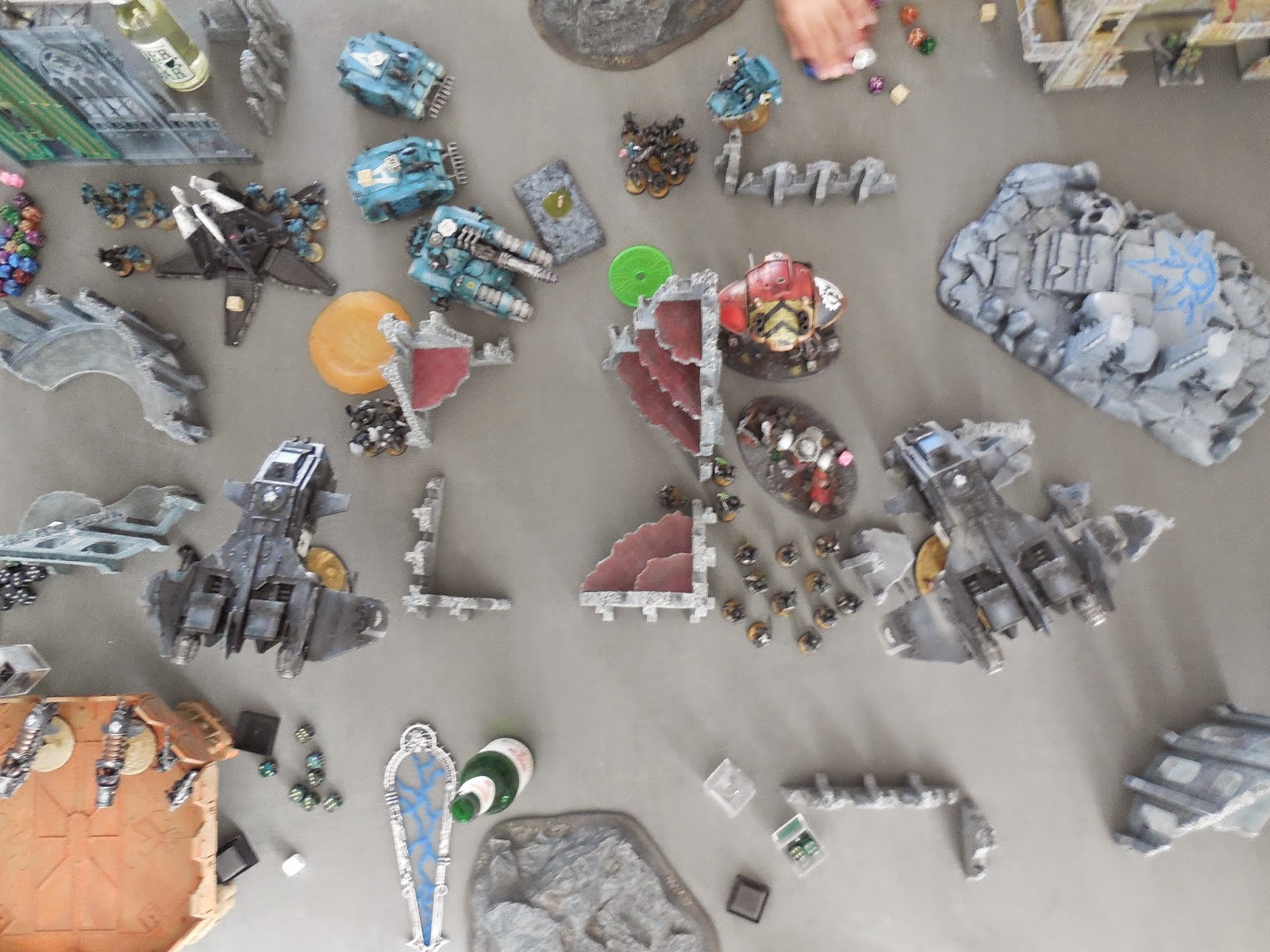 The Alpha Legion turned the fight again, with charges from the veterans crippling the already depleted volkites. The destroyers also felt the combined wrath of the remaining speeder and the Alpha Legion Praetor (Alpha Legionaire No.7. Alpharius). Whilst the Raven Guard were dominant, the next turn would see a flood of reserves. 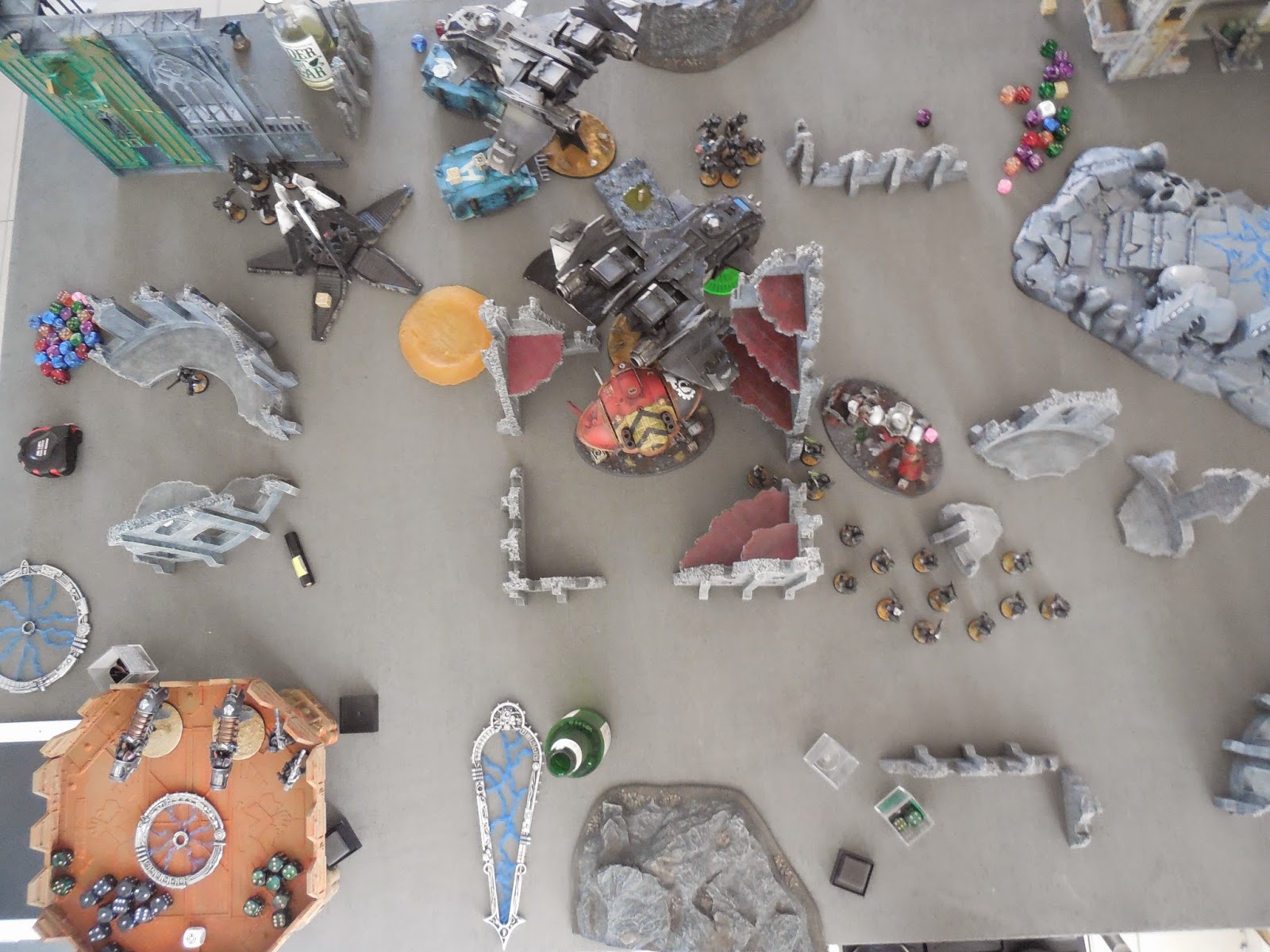 Keeping the momentum, the Raven Guard pushed further forward. At this point my strategy was simple: dominate the Alpha Legion deployment zone. By doing this, I was hopeful that I could easily deal with the reserves coming in. The Command squad cleaned up the veterans, saving the Apothecary who high tailed it out, and the storm eagles pushed forward. 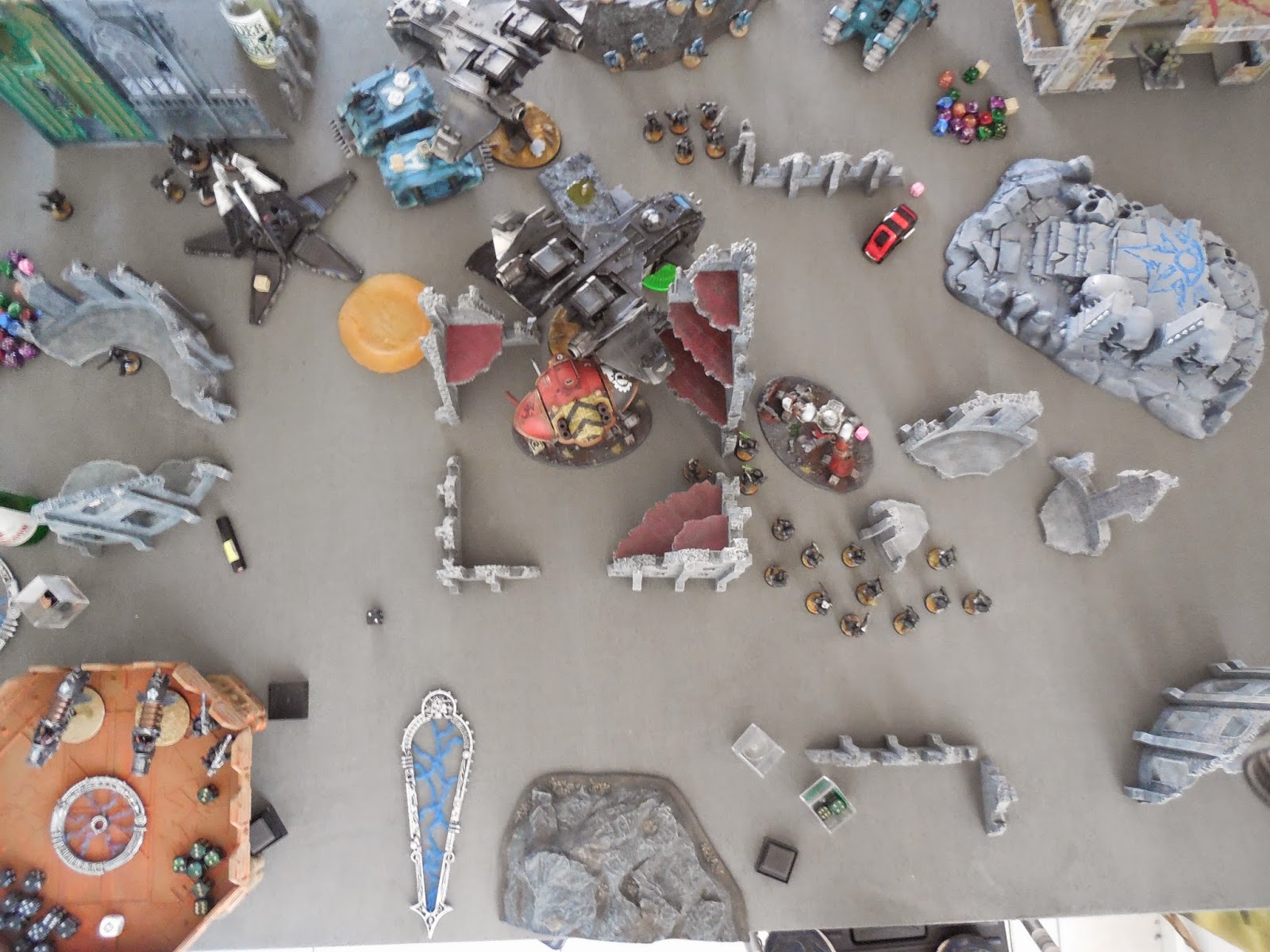 The Alpha Legion reinforcements hit hard. The Destroyers were exposed and riddled with fire, whilst the incoming Sicarian pumped a storm eagle, narrowly not killing it with the first salvo. The main reinforcements were just a wave away. 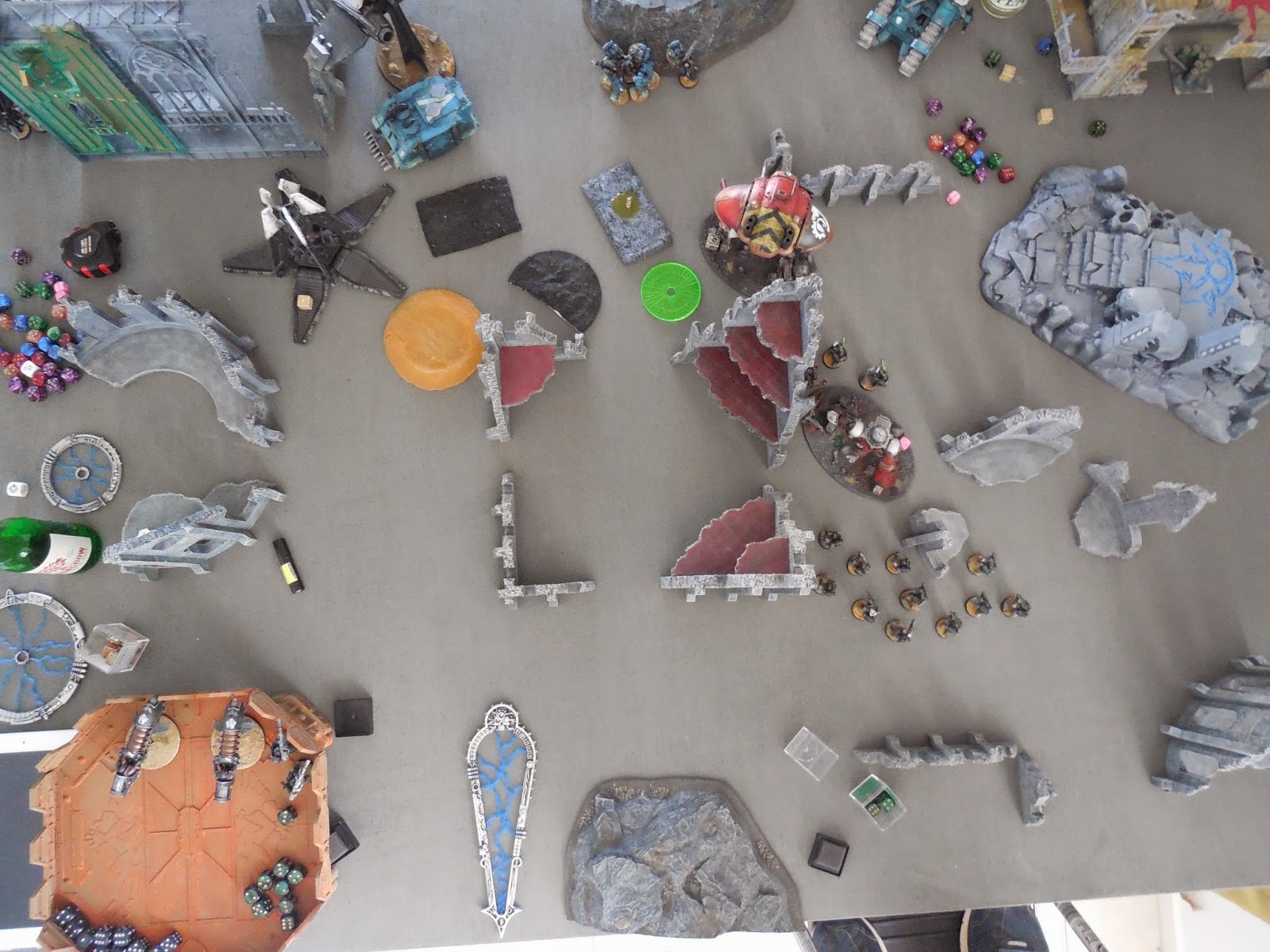 For the Raven Guard, the crippled storm eagle flew into ongoing reserves, and the other vectored for the sole surviving marine  from the veterans who had assaulted the volkites (easy kill point). The destroyers fired at and charged the veterans on the hill, however, the overwatch slew two of the 5 before the assault even commenced. The command squad targeted a rhino that drove on behind the church, easily smashing it. Importantly, I rolled a 2, so the game would soon end, based on Cat's super secret D3 roll. 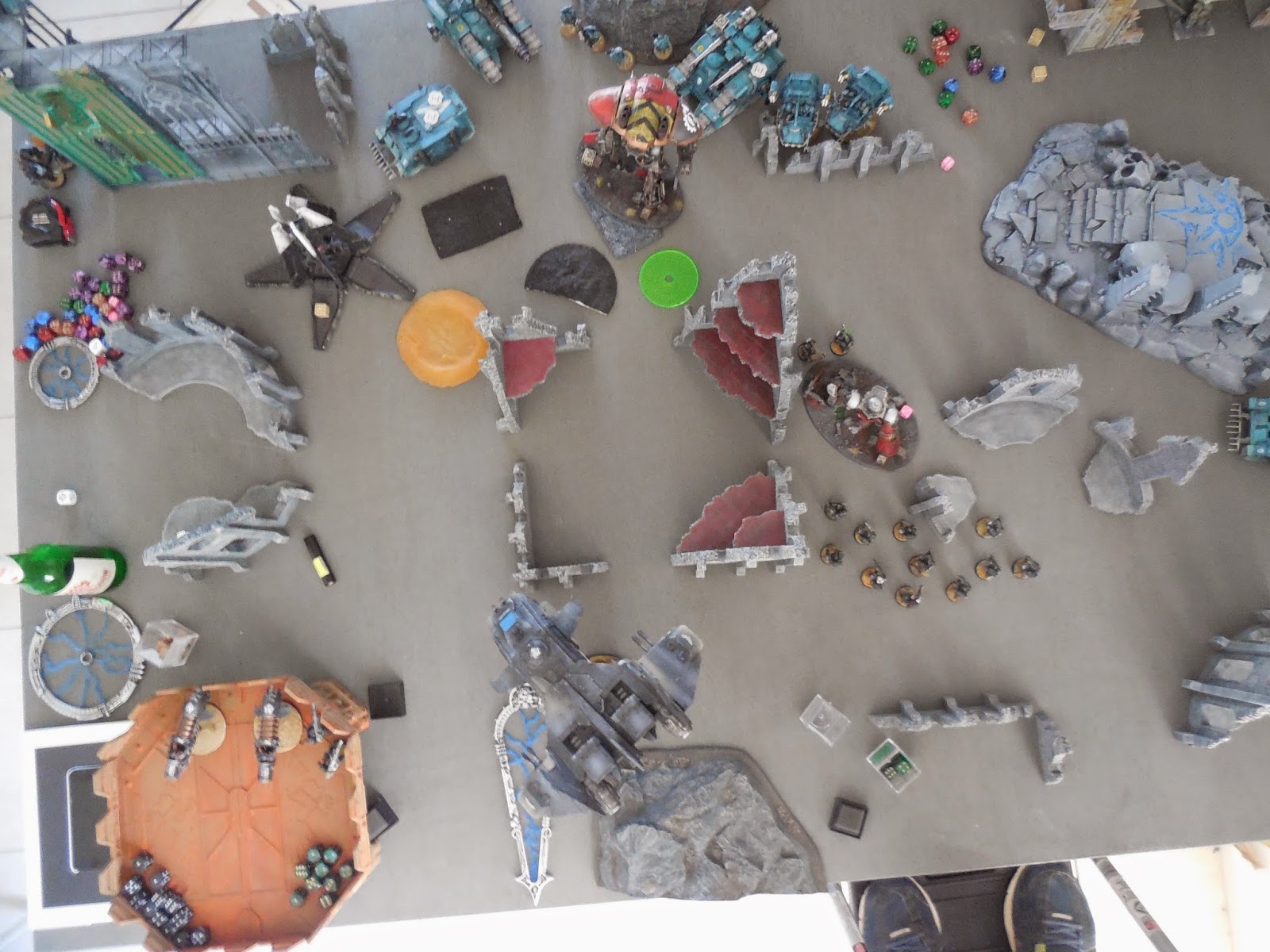 With a roar of engines, the Alpha Legion renewed the fight. Firstly, a rhino outflanked, firing and taking down a breacher. The Land Speeders flew in, throwing their firepower into the knight, who managed to make invulnerables  against both melta shots. The Venator added its fury into the unshielded side, but luckily for the knight, managed to only strip a hull point, leaving it on 1. The veterans on the hill wound up finishing off the destroyers for another VP. 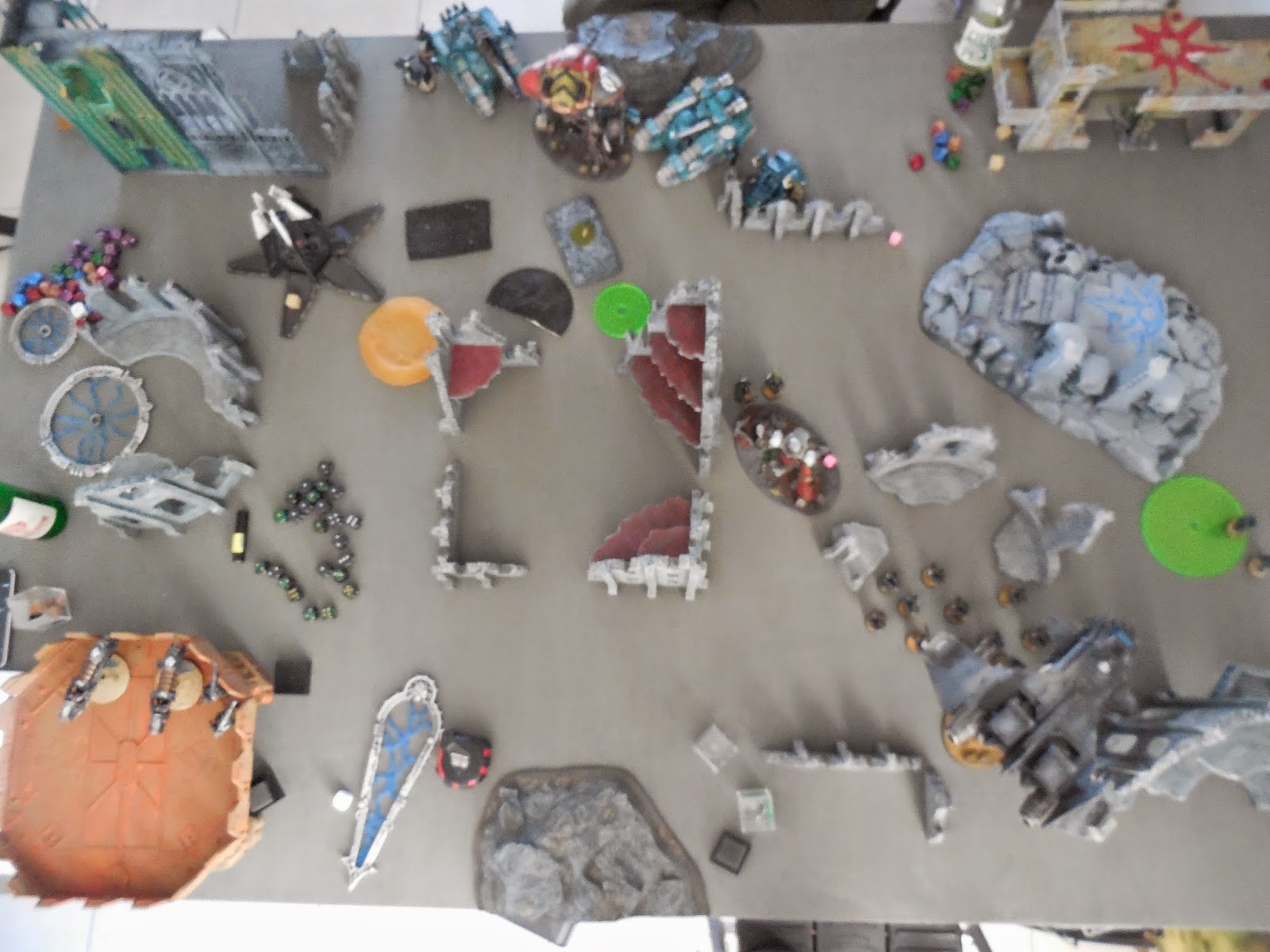 This turn for the Raven Guard was all about threat elimination. The Command squad leaped over the church and assaulted into the Venator (killing it and losing one of their own in the explosion, the knight queefed against the marines on the hill, whilst the incoming half-dead storm eagle managed to pop the Alpha Legion Rhino. The unfortunate occupants were then riddled with fury of the Legion, killing all but two.


Then, it was all over. Cat informed me that he had rolled a 2 for his D3, meaning that the Raven Guard had been successfully saved. The final score was a mighty 21 VP's to the Raven Guard, and 6 to the closet loyalists. The outcome I can attribute to two things: my Knight killing his and surviving, and the always dominating performance of the storm eagles.

The game overall was fantastic, the mission is actually quite well designed, with just a few key rolls swinging it heavily toward the Raven Guard. The stratagem of dealing with Alpha Legion units on arrival aggressively rather then hanging back and allowing Cat to mass his forces probably helped me along. At the rate of attrition, I would have lasted to maybe turn 7 or 8, but in a potentially 9 turn game, if I lost all my models on the table, it would be game over. 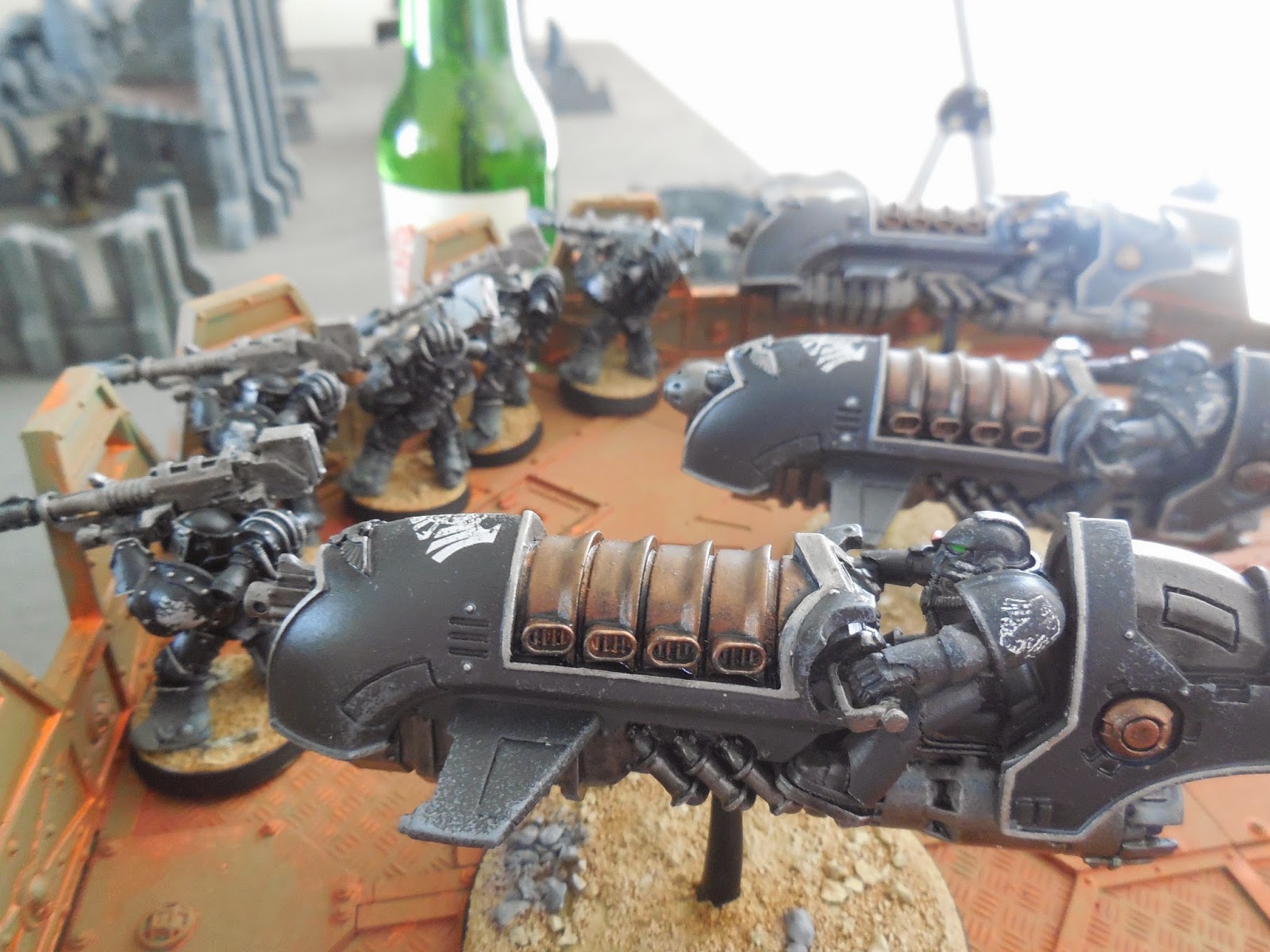 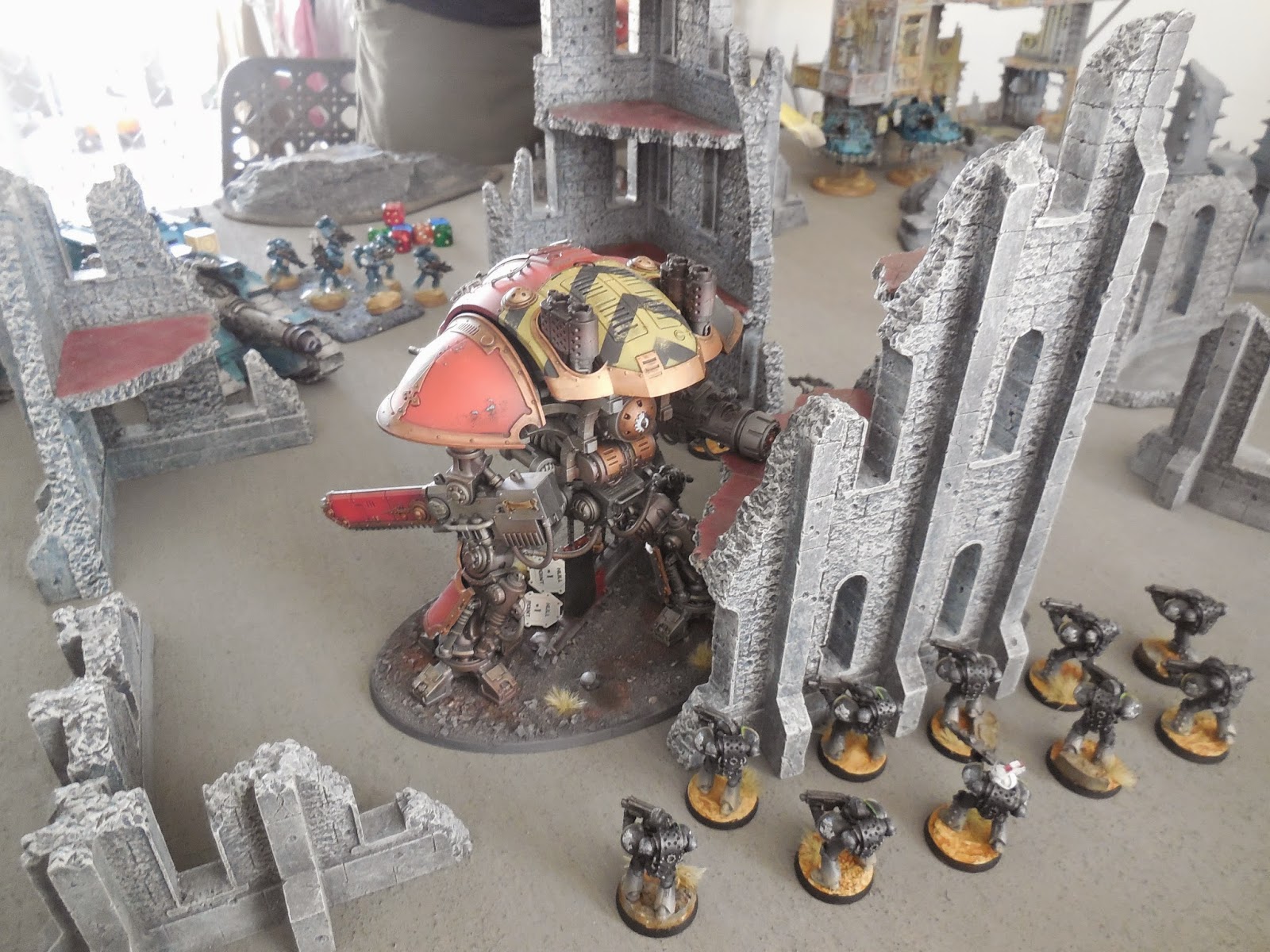 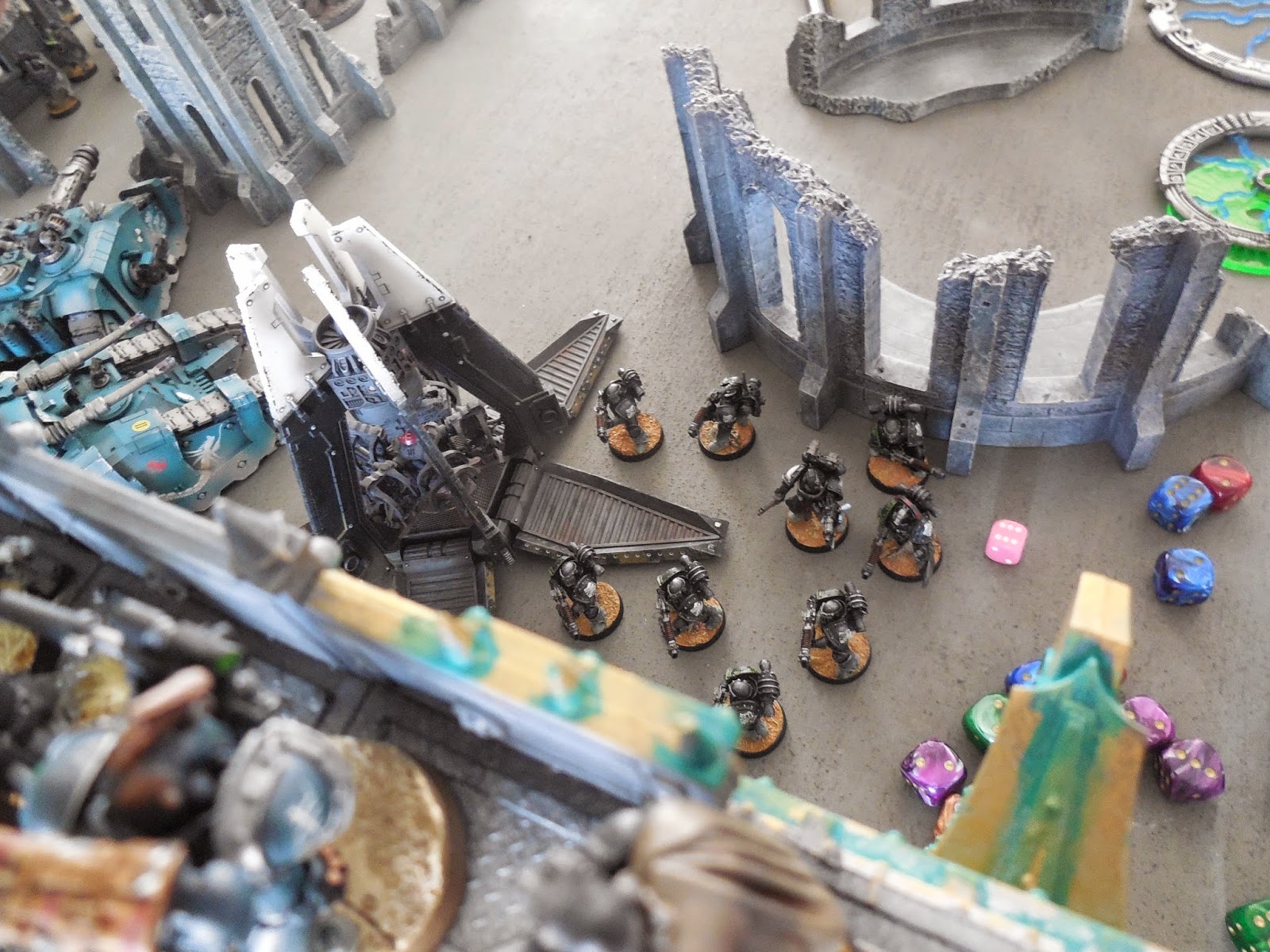 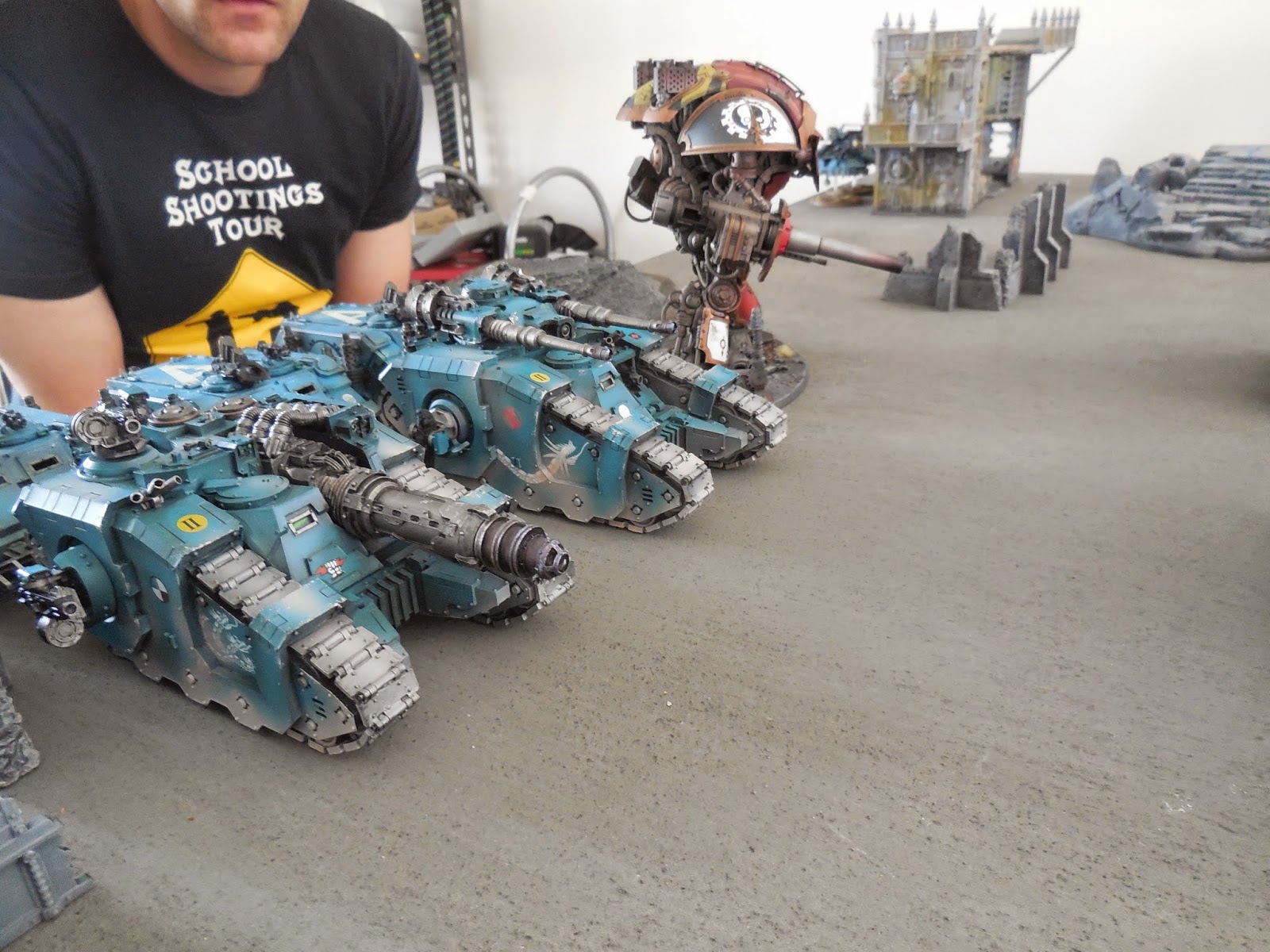 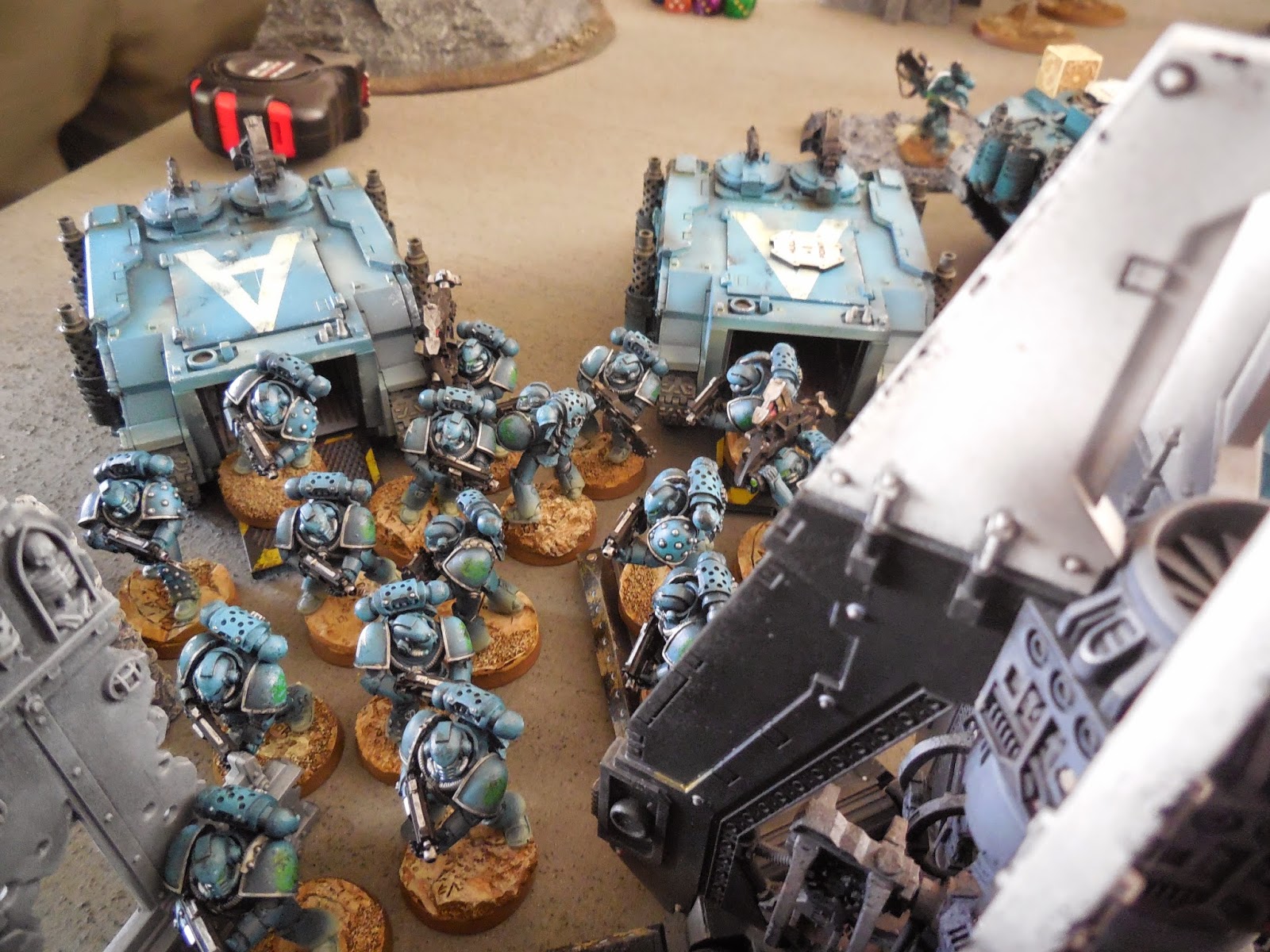 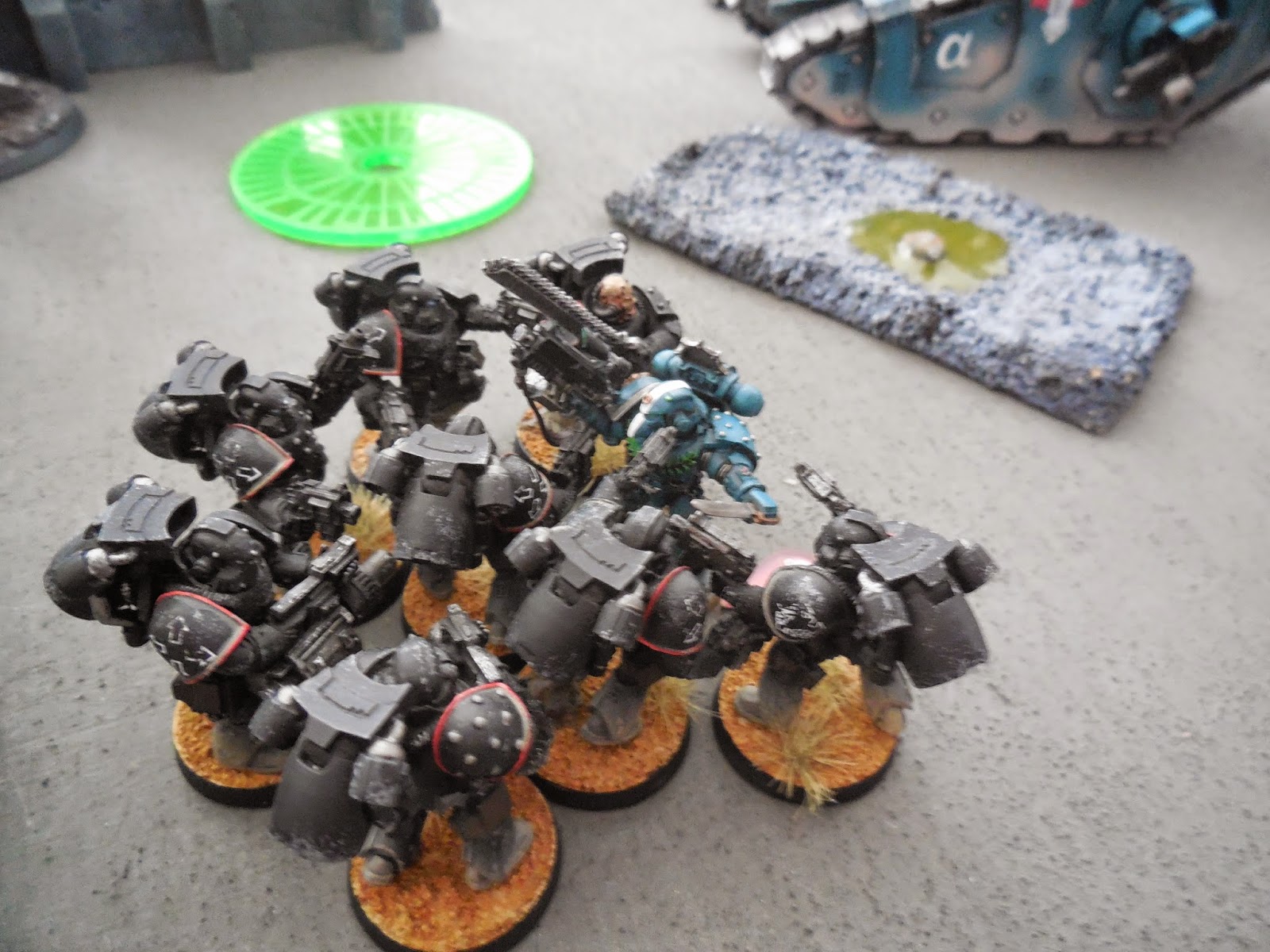 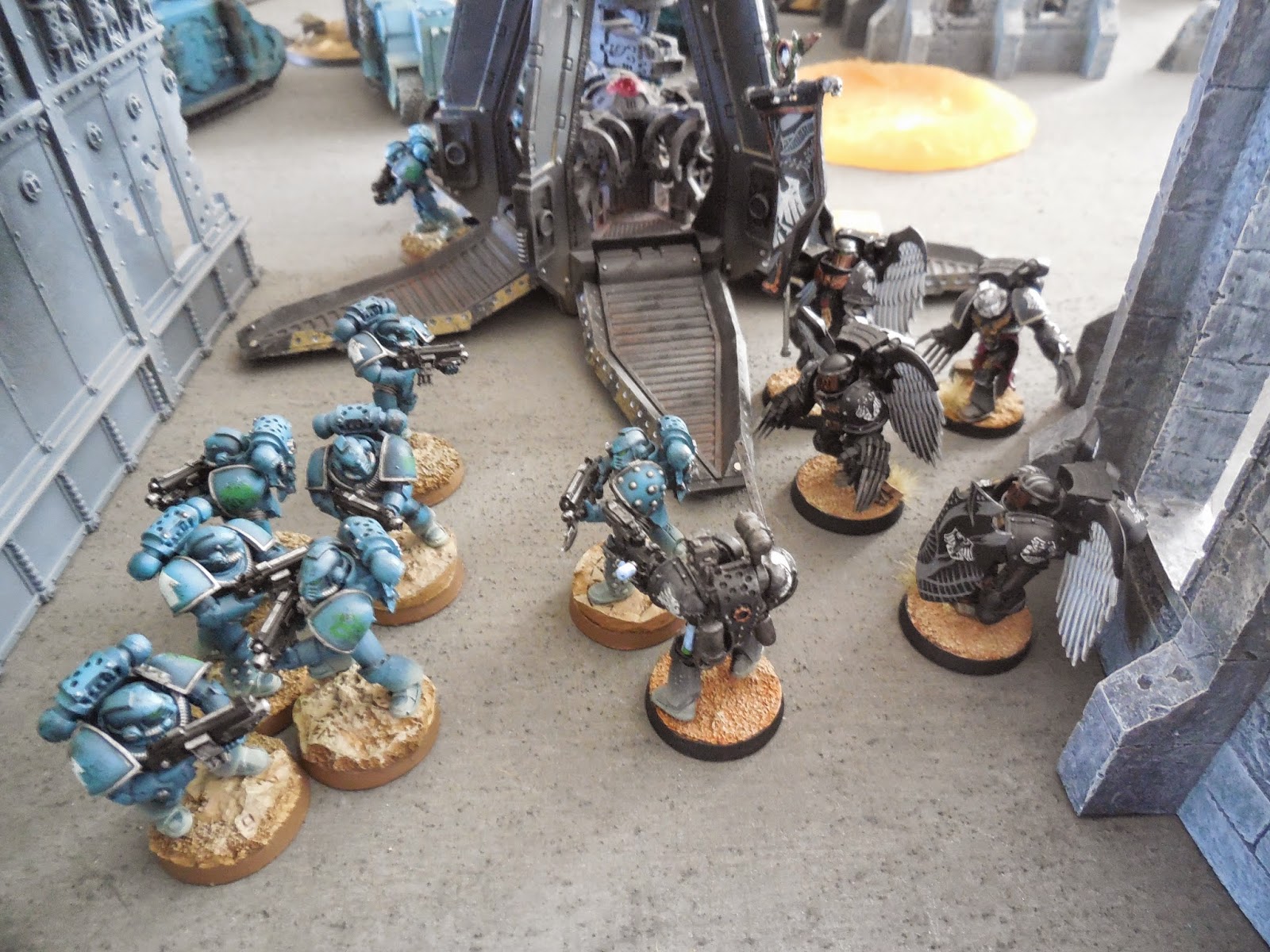 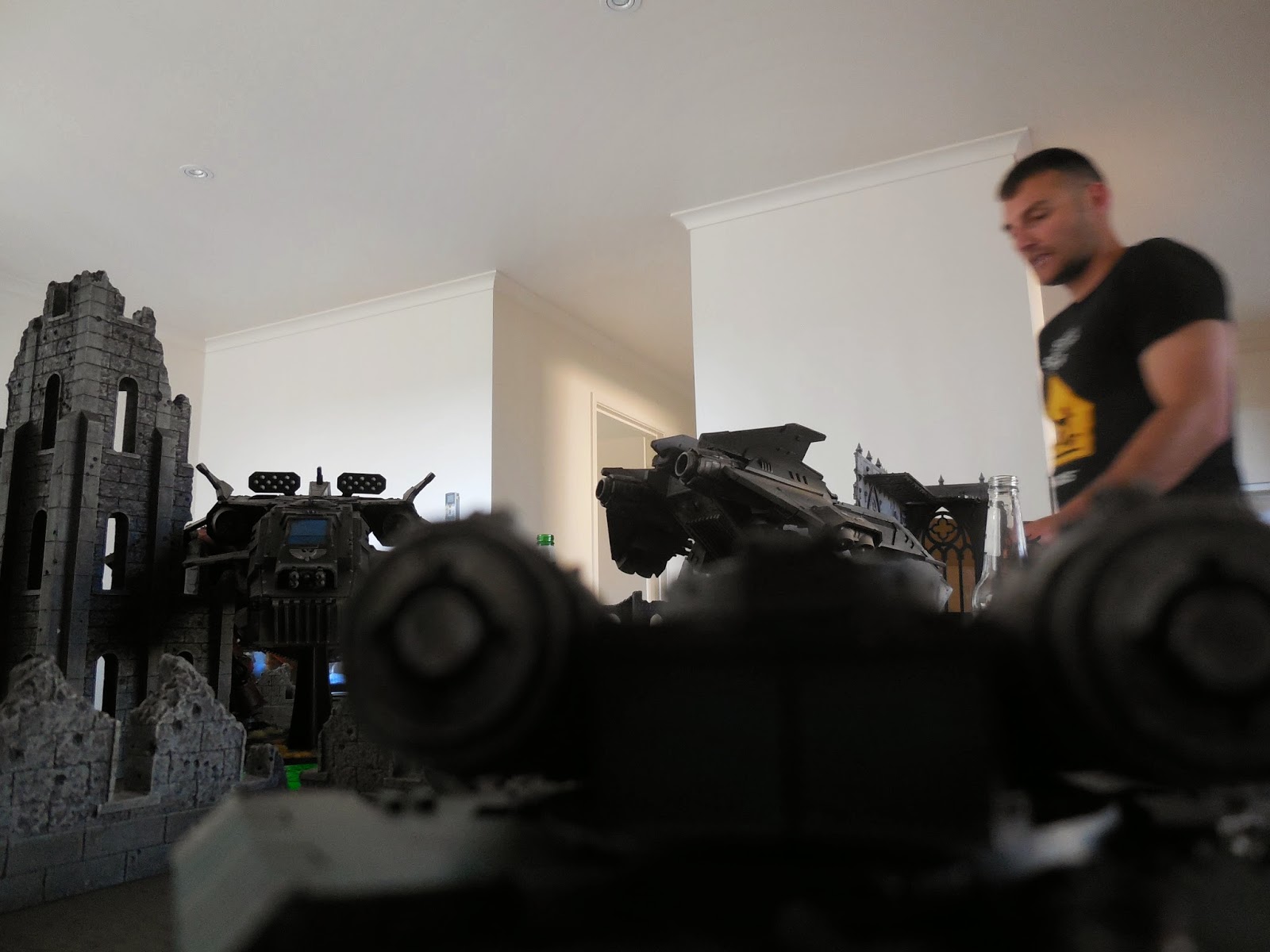 So that's it, hope you enjoyed it, because we sure did!
Posted by Unknown at 21:21