Hello people of the wider universe we call the internet.  My name is Brado aka Dice Wizard and I have been invited to join the crew here at AGIF.  I have been hanging around a couple of members of the AGIF crew for a little while and have been mentioned in some of their posts mainly about lists and certain tactics I have used (jet bikes with librarian and medicare for one). I plan to bring my little bit of knowledge on how I use certain units and lists to get the most out of them, but first I guess a little about me.

I am a mad keen tabletop RPG player, at one stage I was playing 3 times a week just to get my fix.  Have been playing for over 10 years and have loved the many different experiences and situations I have been in.  Now I still play tabletop RPG and also 30k.  Keepy introduced me to the 30k universe with a proxy game.  That one game got me hooked on the rules, units and the fluff because who doesn't like a good story.  Since I had the RPG background I looked to the units that I thought are a stand out in the legion list and started to see what I believed to be a strong list for an up coming tournament.  This list was built around the White Scars way of fighting, so fast and fierce with plenty of fire power behind it.  So the research began into what units could do what and how they would all work together.  This has lead me to look into many other units strengths and weaknesses so that I could counter and or abuse them.

Currently I have moved on from marines and have started a Solar Auxilia army.  I haven't started even prepping what I have so keep an eye out, since I am going out of my way to learn some new painting techniques to see if it will make my current painting ability better.

So onto one of my favourite things and that is tactics for the different units out there for the legion list.

The first vehicle I am going to explain tactics and uses of is the humble rhino transports.  This tank is highly underrated in my area as it "always" gives first blood.  I don't believe that it "always" gives first blood because if they are used properly they should be an annoyance through most of the game.  So onto the first of many tactics I like to use with rhinos.

While running 2 rhinos (even numbers work best with this strategy) you move them forward and use them as a portable wall for your infantry.  This was a tactic during 5th Ed I was told, didnt play so don't know, using the rhinos to go "butt to butt" and piling out your troops behind if needed.  If there is no cover for your rhinos while doing this is the early turns pop smoke in your shooting phase to give them a roll against attacks.  Remember this is now a safety blocker for your marines that have just popped out the back from many anti infantry guns, except barrage. 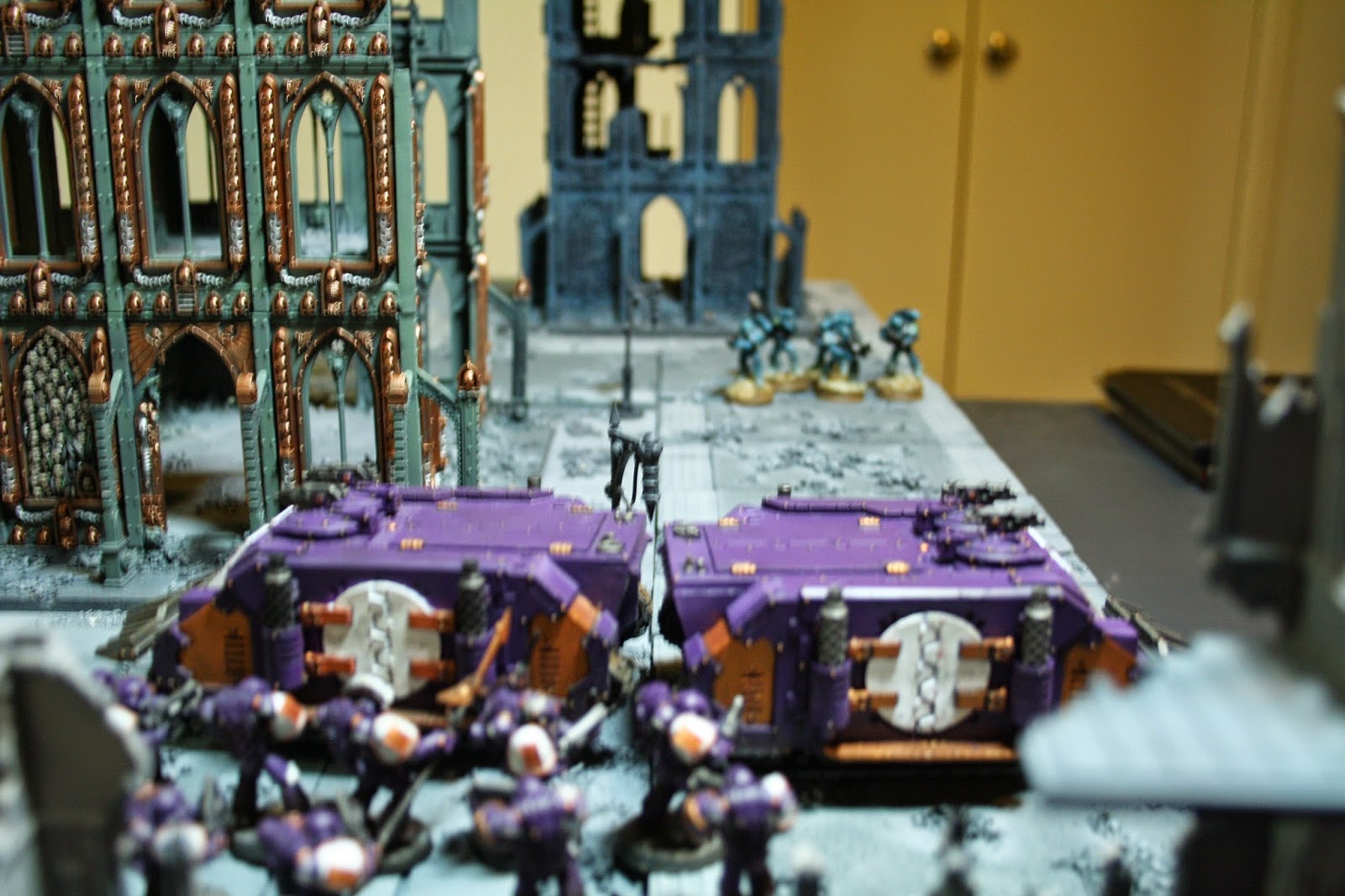 The next step in this Tactic is opening up, straight apart, the rhinos to allow your marines a clear shot at any infantry, if tactical, or even tanks with a support unit.  With the rhinos apart turn them both around to face each other.  Shoot the marines first then have both rhinos go flat out and close again giving your marines cover again. 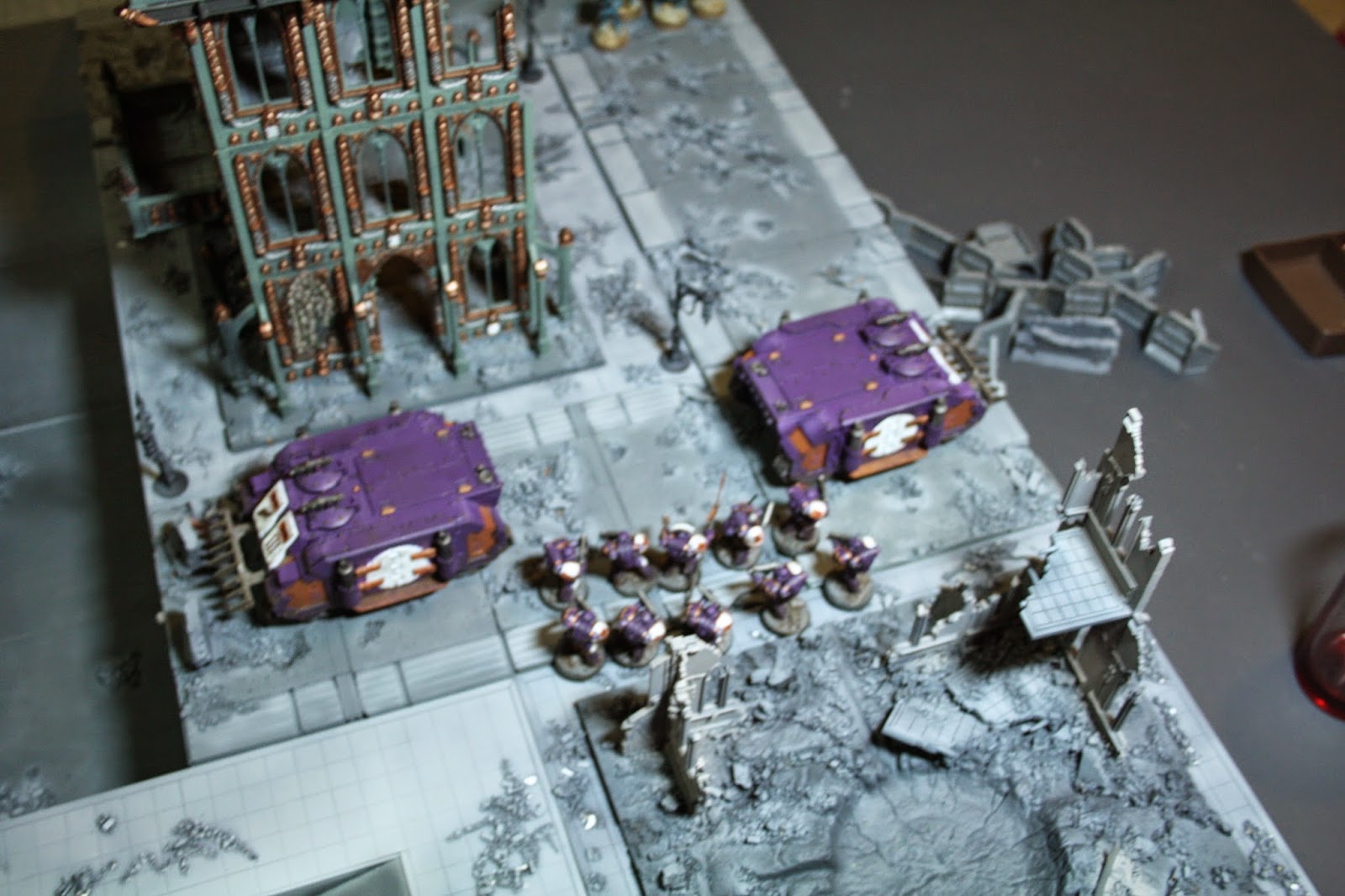 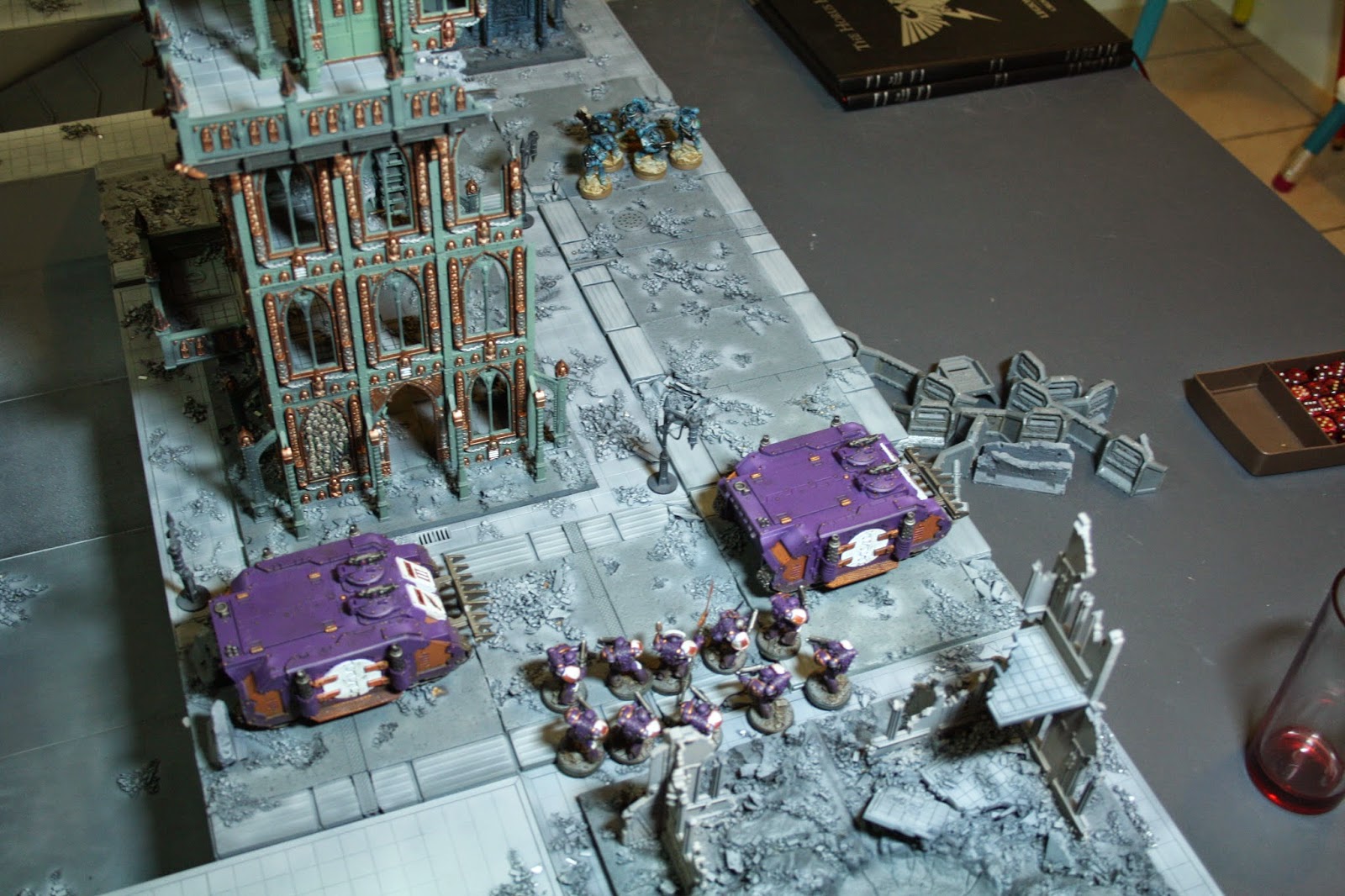 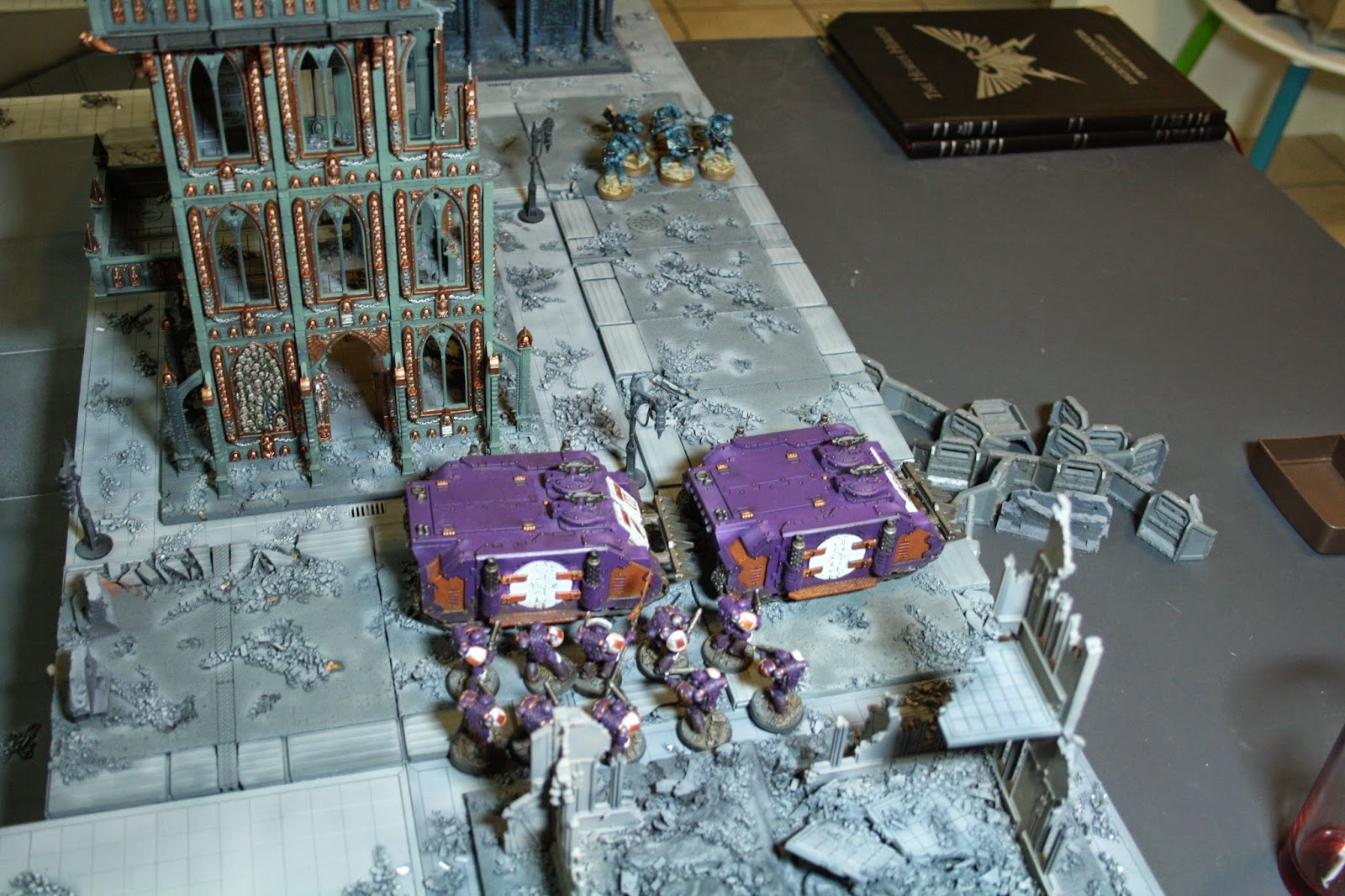 You can also use the rhinos to creep up the table with marines out the back.  This is done very much in the same way as before, except that you move them forward 6" then have them face each other with the marines moving up to see between the gap and then once again flat out rhinos close.

This can also be adapted to protect your assault marines to get across the board without suffering too many casualties before they make close combat.

Another use for your rhinos is to block off objectives.   Once again you are going to be using your rhino as cover for your marines.  Ideally you want to block off line of site to your marines holding an objective to give them a good staying power as well as cover on a side they don't have without it.

This tactic is very simple to setup as well.  First look at the layout of objectives and also how your opponent has deployed, this will govern where you set up the wall block.  Once you have selected an objective to take with your rhino squad I like to charge for it so that I can then bunker down and hold. I find most of the time if you use cover you can go 18" in a turn and be on an objective first turn.  With this objective held you can use the rest of your firepower to protect or remove the opponents forces so that the objective is too much of a nuisance to get. 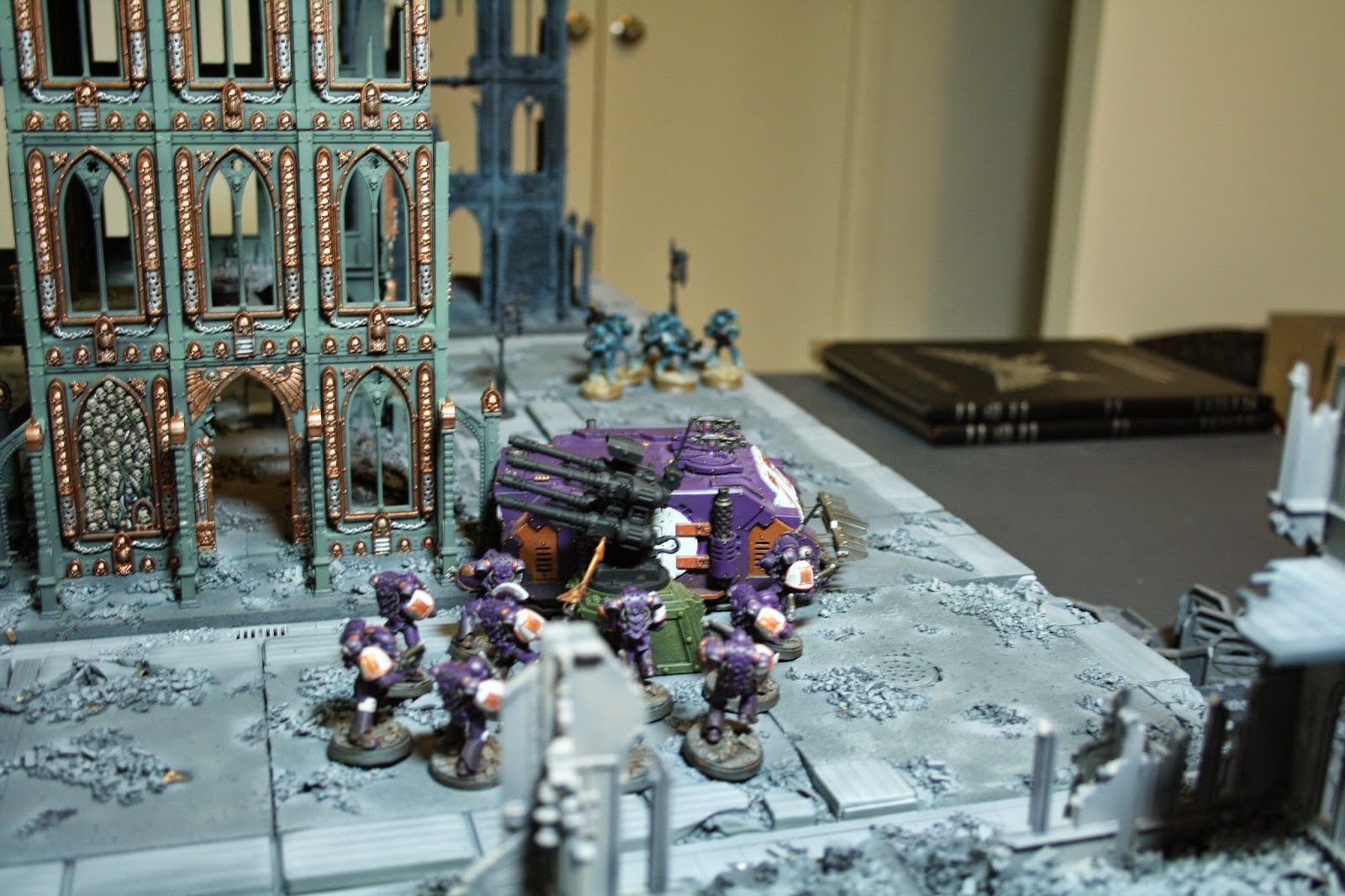 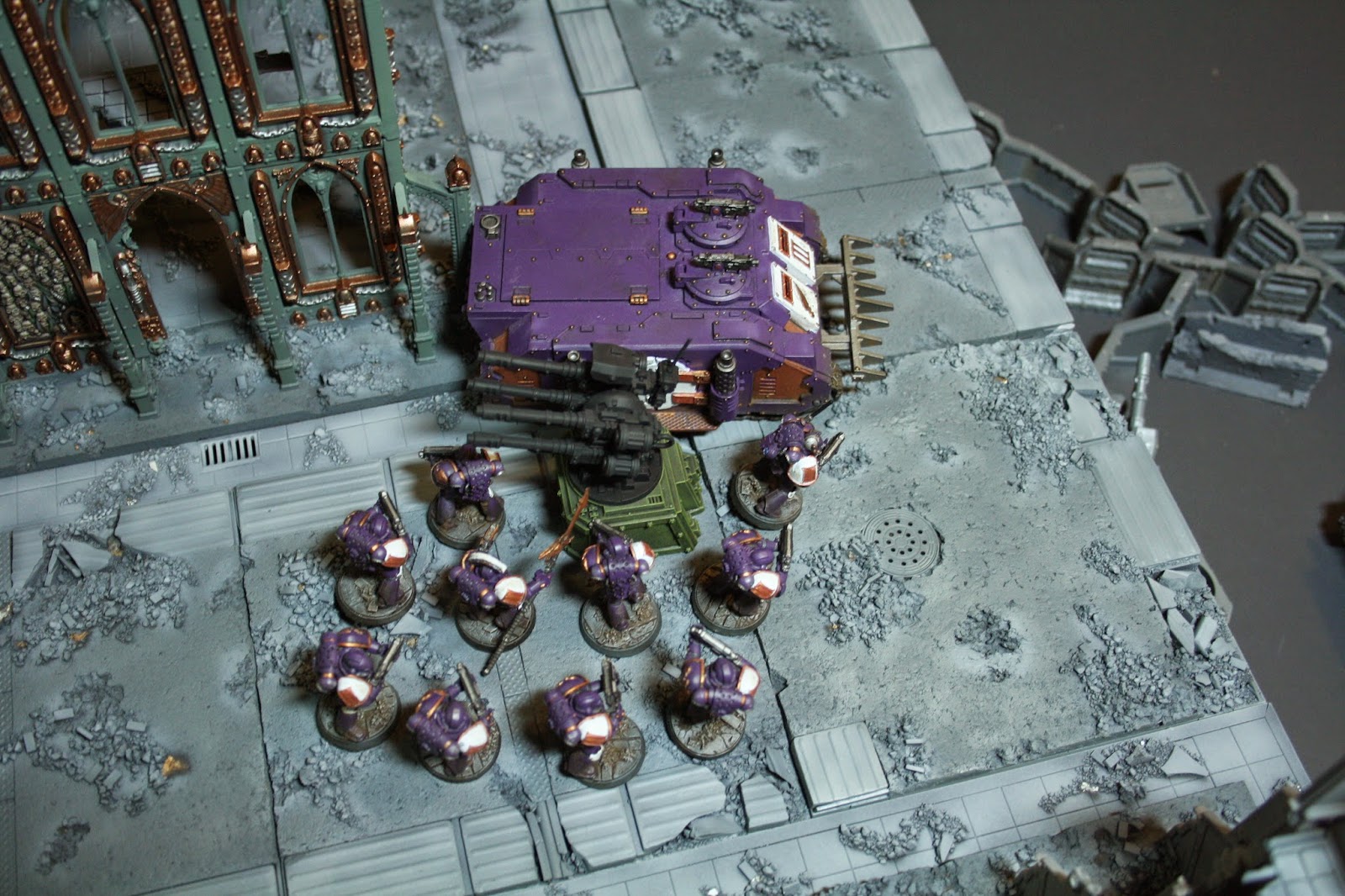 An add on to this tactic is to allow your marines to shoot on your phase and have the rhino play as moving cover again.  This just means you will reverse your rhino to open a fire arc allow marines to fire then go flat out and form the blocker again. 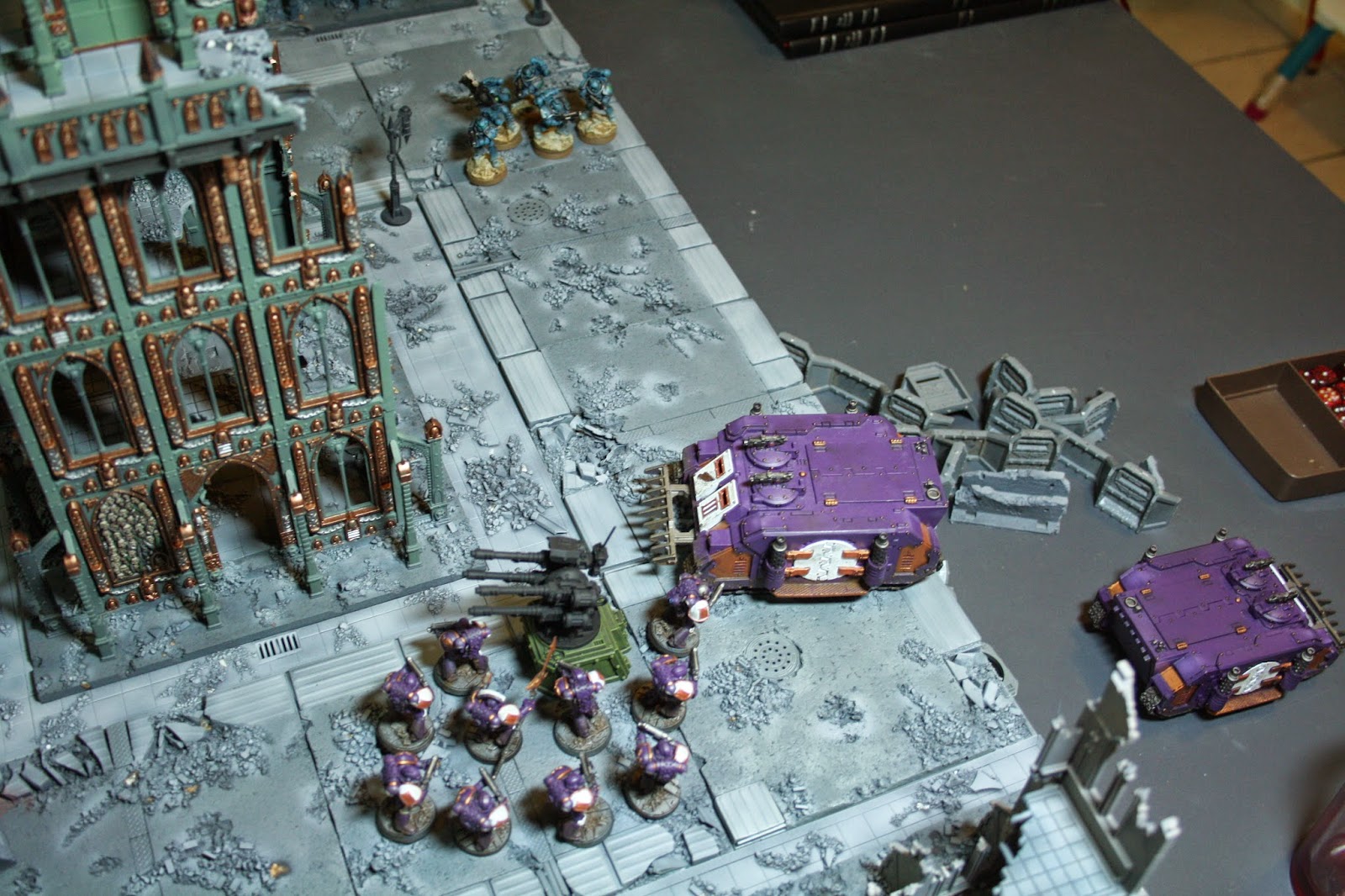 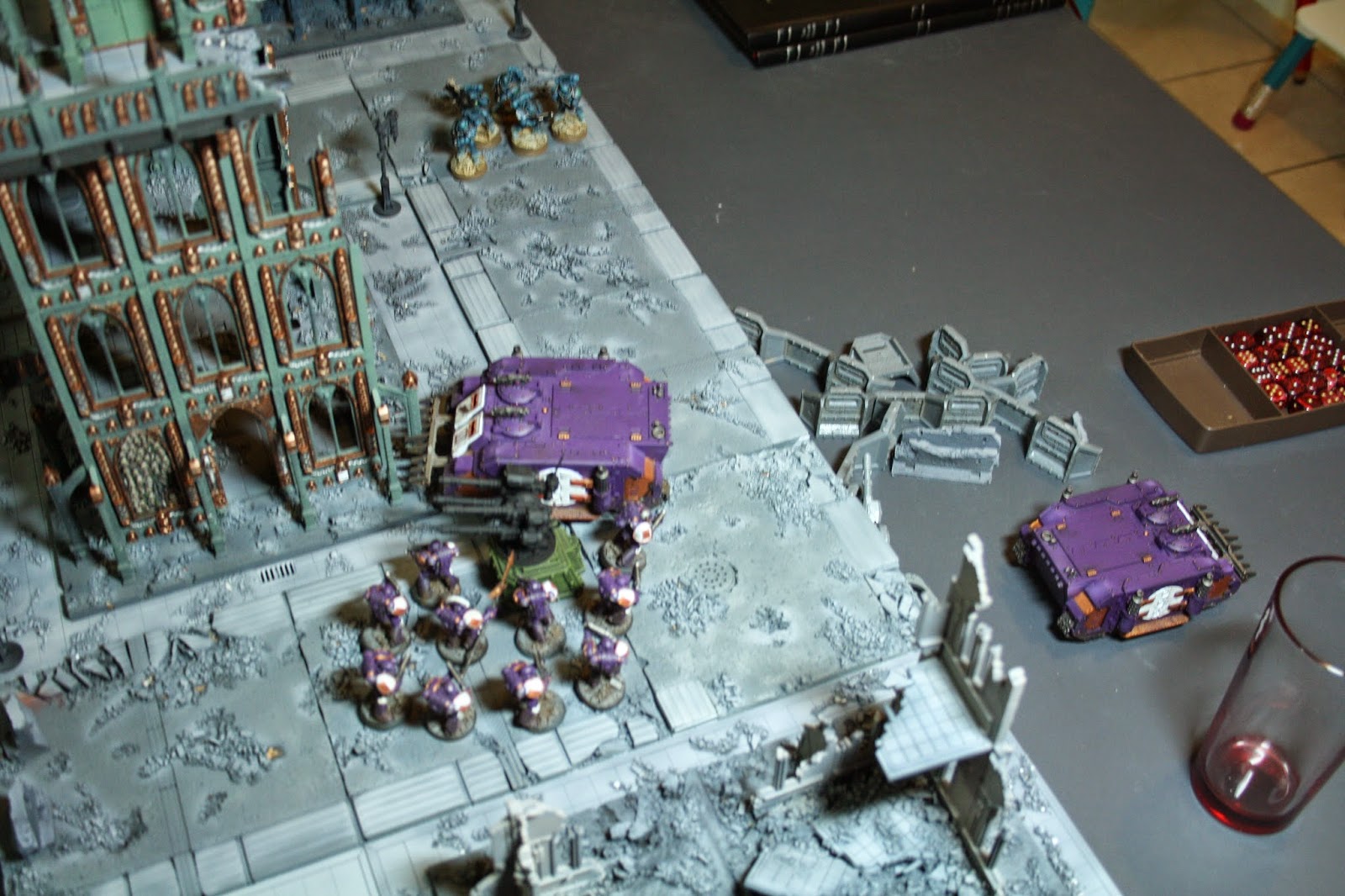 This just uses the rhino to give your more dedicated shooting tanks a cover save using the rhino on the required side.  In some cases this removes one of the weapon system on the tank such as a Sicaran's heavy bolter.  Other tanks get the full benefit such as predator tanks since they are built on a rhino frame. This tactic can allow your tanks to get a mobile piece of cover to help them live longer but also can defend them from possible charges due to the rhino being on the required side. 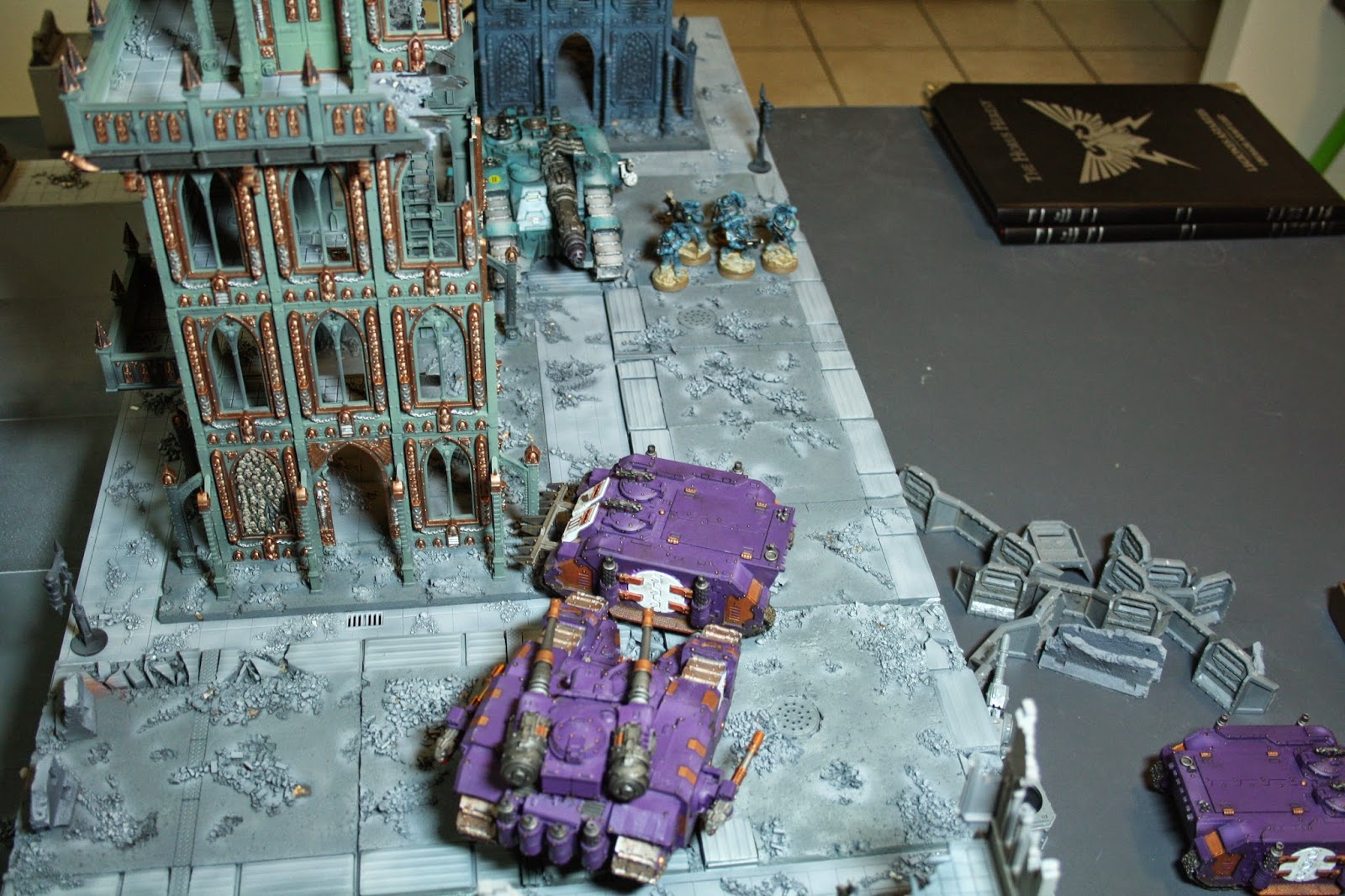 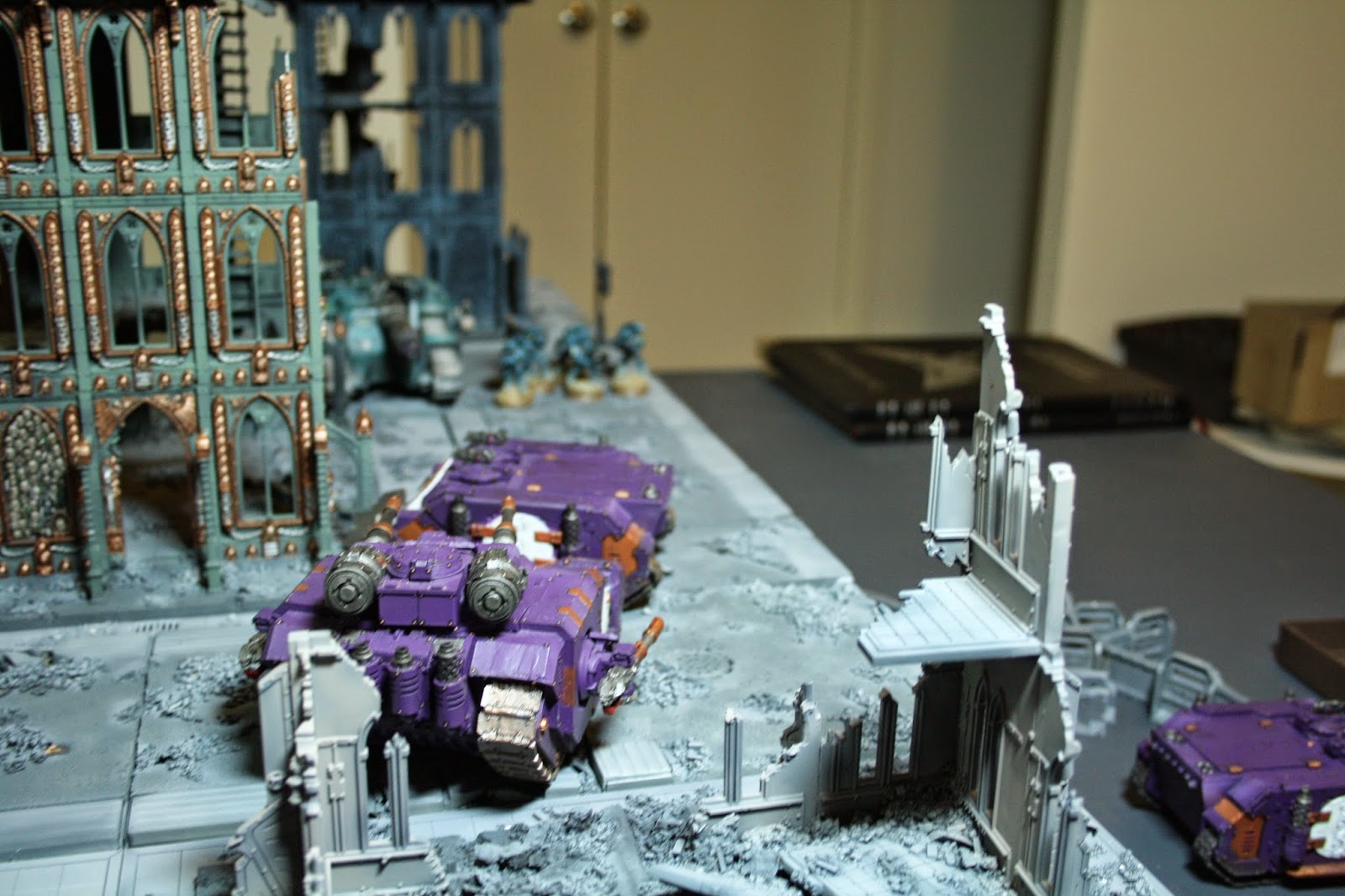 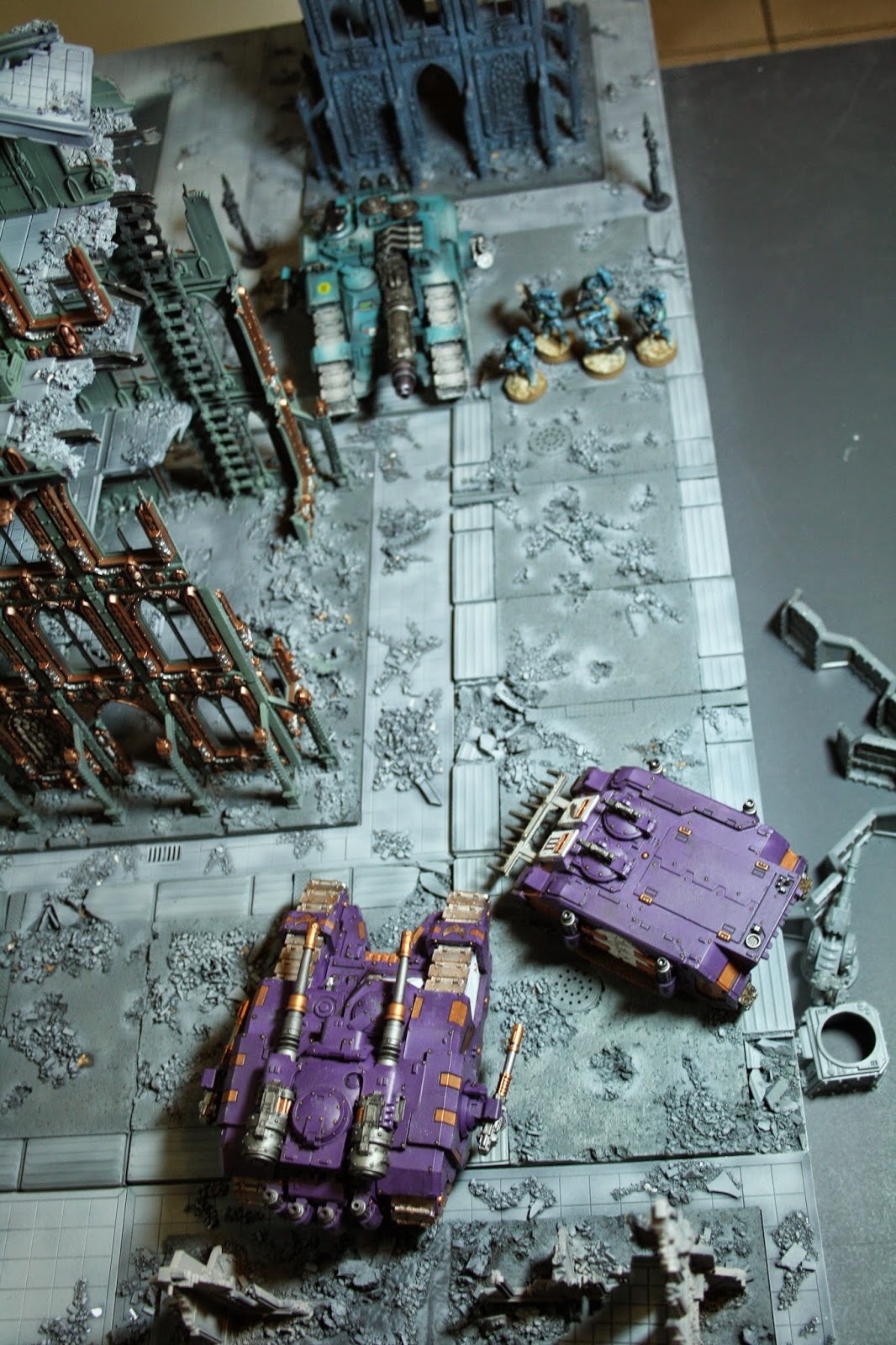 These simple tactics can be of use to some and not to others.  Also these are only a few tactics I have used and learnt of the years.  There are also many others out there and if you have any that I haven't mentioned leave a comment and I will try my best to incorporate it into what series of tactics.

Also thanks to Wadey for a lend of the models and Keepy for use of his amazing table.