G'day, and welcome to an exciting new project, the start of my 30k Epic Titan Legio! For years and years I have said to myself "I want to build and paint some big Titans" but, time, money, space etc all got in the way. Then the thought occured to me.... why don't I make an epic Legio instead?

So far, the only Titan to arrive into my hands (or bits for that matter, 4 weeks I've been waiting on some 60mm bases and some spray paint from GW. You can take a guess at my rage on that subject..) is an Imperator Titan. They look a little something like this.... 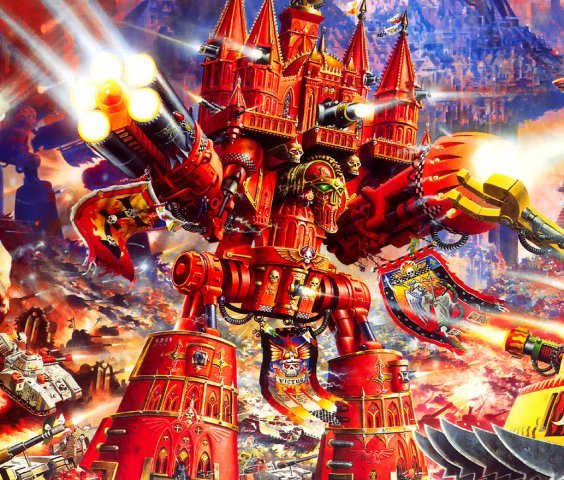 Ah, the RED ERA, a period in GW history where everything had red on it, even camouflaged units had red muzzles... anyway, I digress. The Imperator was never a pretty model, it was a product of GW in its finest years, the early 90's, a product that was cheap, plentiful and basic. Nowadays however, you struggle to locate them in anything resembling working condition. Just go to Ebay and try and find a Warmonger Titan (this mini with a metal bodykit), I found a few going for $700Au!

Now, all that aside, the miniature itself hasn't dated well. It's clunky, mono-pose, the weapons look terrible (namely the big guns), the details are weird and distorted. The kit is also small, despite standing approx. 120mm tall, I find it is too similar to the current batch of Reavers. Thus, I had to go bigger. 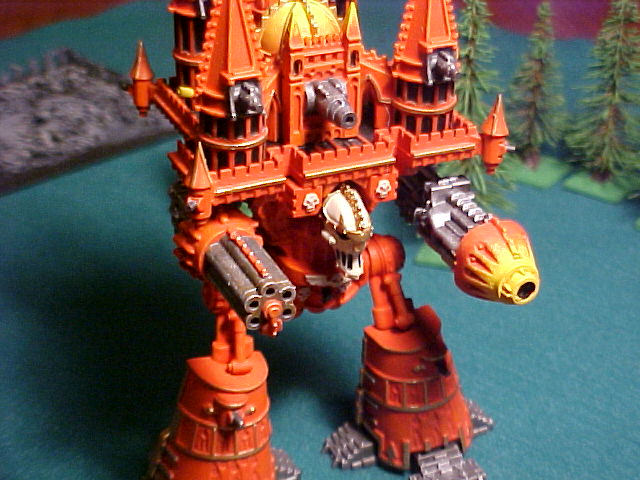 This is the kit I scored from Ebay. I was VERY happy with the cost and the quality, these are getting harder to find every year. 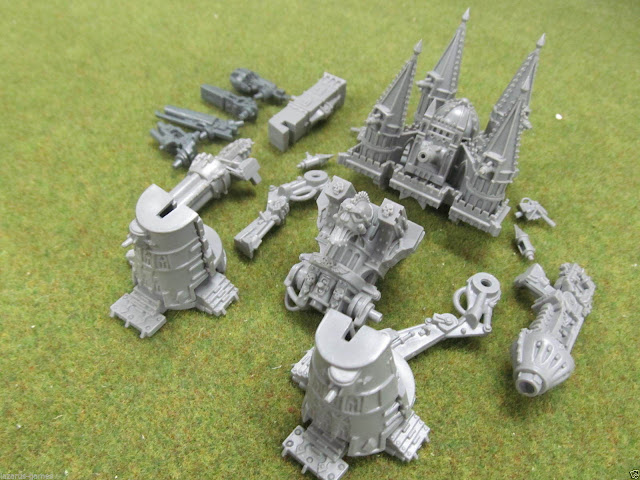 I cut all the fugly 90's skulls off it, they were all individually sculpted and kinda derpy and not only that, but the Aquillas were terrible. I replaced them with a mix of nothing, Aquillas and shields from 40k Terminators. The skulls all over also didn't suit the look I was going for, so sadly (not) they had to go. 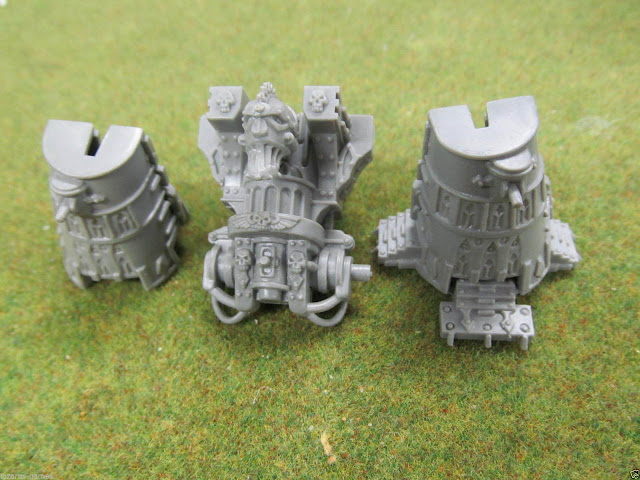 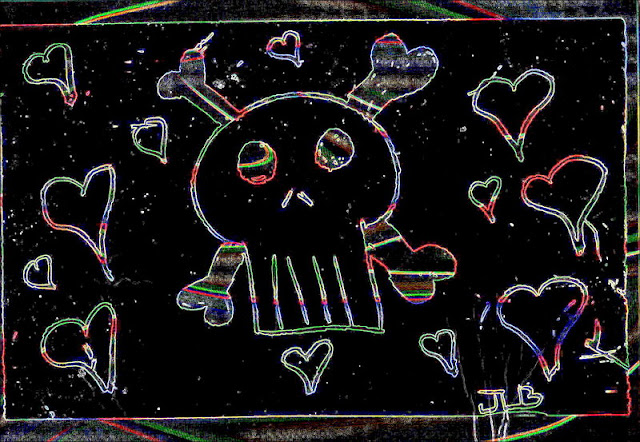 Where I ended up at the end of it all however was here: 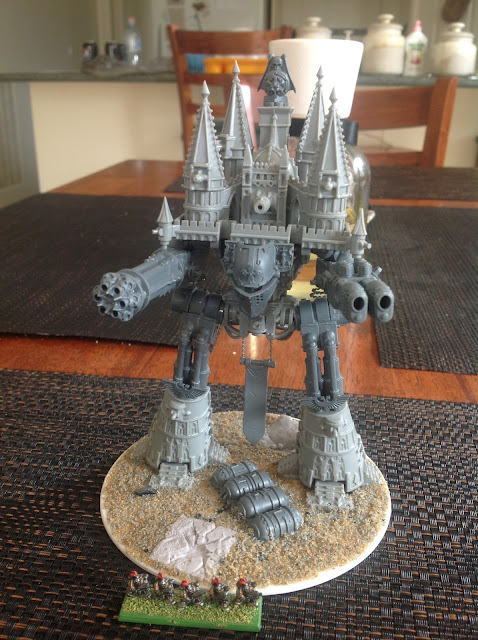 The base itself I cut out of two sheets of 1mm-thick plasticard glued together. I have my own lathe, so this was VERY simple to do. The most noticable part of the conversion is the new thighs. Leg day has not been skipped, and now a mighty duel-piston arrangement propels my Imperator. Just for some scale, here is the old thigh next to the new ones. 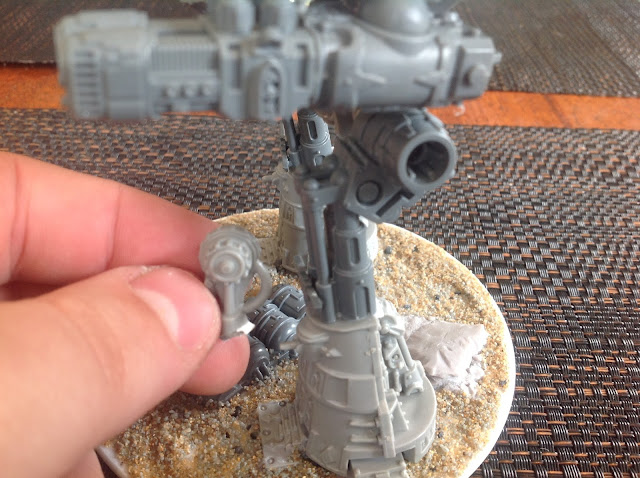 I also made short work of the old weapons and arms, making new and bigger weapons out of parts from the Forgefiend and Storm Raven kits. 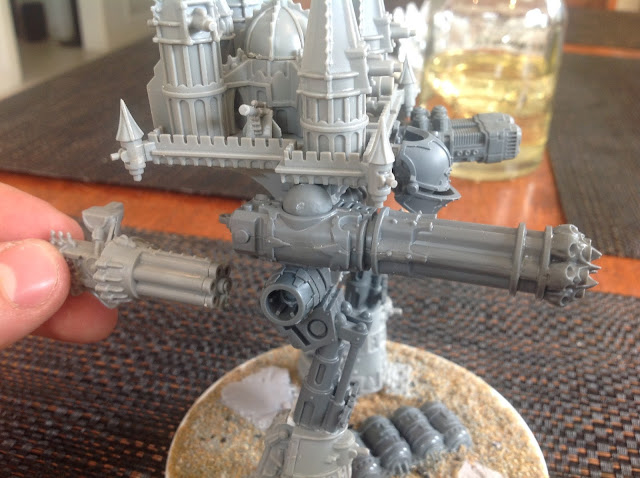 The new Aquillas are from Leman Russ and Imperial Knight kits. I used them for a fancy belt buckle and knee pads respectively. The tabbard (strip of cloth in the middle of dat thigh gap) is from an old Dark Elf kit. 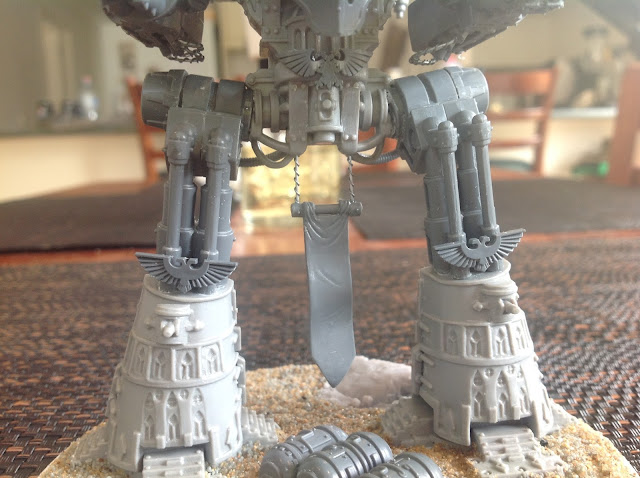 The original derpy head was decapitated, the neck lengthened, then the head was re-attached with an Imperial Knight mask over the top. This head reminded me of the 28mm scale Warhound from Forge World, so was ideal for use here, helping to bulk out the head. 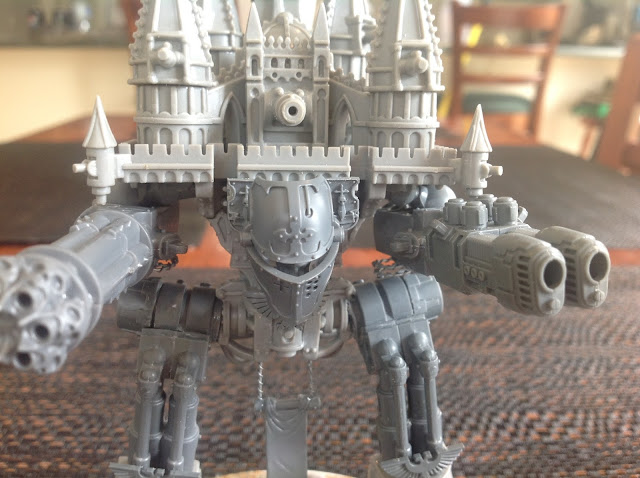 The base as said is plasticard, with a few home-grown and basing bits added. I will be doing a full tutorial on building and painting the bases for my Legio in a couple of weeks, so stay tuned for that. The sand/gravel was fixed using the AK Gravel and Sand fixer, a really stinky but very effective product. 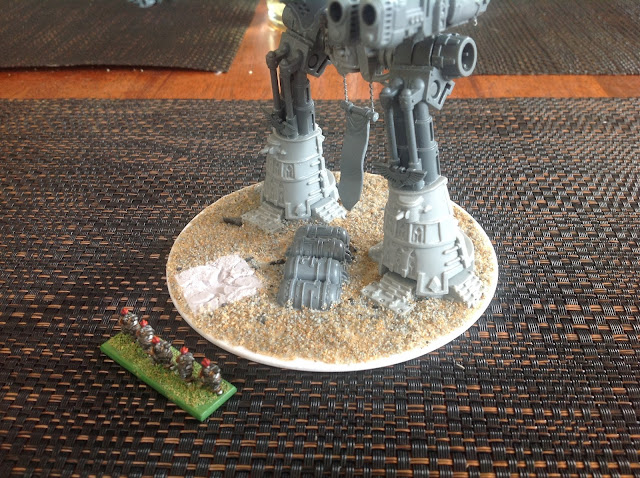 I based the new design on the FW artwork, not the old Titanicus imagery from the RED ERA. I tried wherever possible to keep the original parts, but in some cases, sacrifices were made. All in all, I hope people see that I tried to be faithful to the 90's look, but that I also have modernised a shocking older sculpt so that hopefully, it blends with the newer Warhound and Reaver kits, as well as the overall 30k aesthetic. (Yes, those are my original epic 40k Iron Warriors with classic Goblin Green base. Judge me not!)

Bonus points if you can guess the Titan Legio... no cheating, to those who've seen the painted one!