Finally, the Legio Mortis engine, the Imperator Dies Irae is complete, and ready to lead my Legio into battle. This was a fun project, and despite being a 90's kit, I feel I have made it work for the newer more grim-dark 30k. The original miniature of course is well known as the walking church.

The overall engine stands 155mm tall (a touch over 6" in the old system), making it around 35mm taller than the original kit. This will hopefully give the unit more height to help it stand above the newer Reaver sculpts (which clock in at around 90mm). 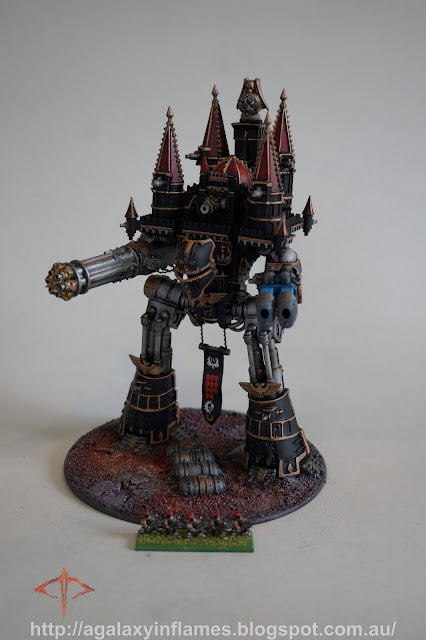 The model is painted flat black, with strong reds to help contrast. The gold I tried to make feel like the gold leaf on an old picture frame, with tiny chips where it is flaking off. I have kind of succeeded, kind of failed, but it was a cool concept to try anyway. 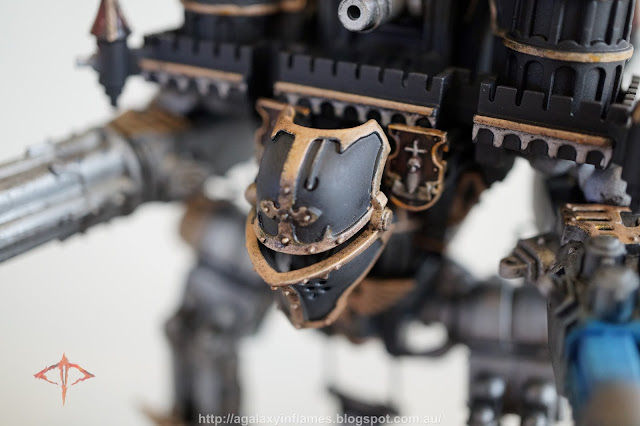 The bright red really gives some colour to the rather plain sculpt. 95% of the Imperators and Warmongers I have seen are painted in flat colours all over. That is the way kits were painted in the 90's, our modern styles are very different to the hyper cartoonish styles 20 years ago. 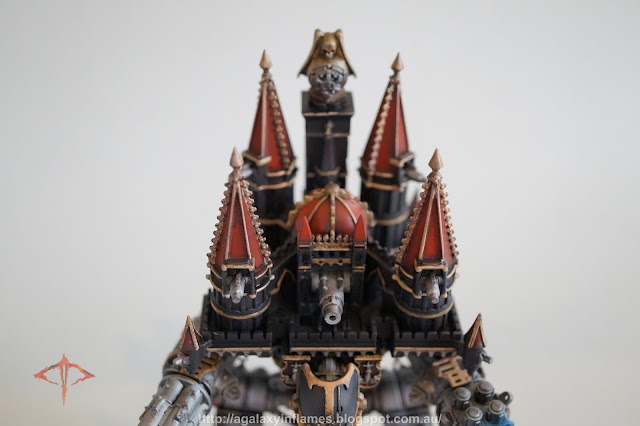 The tabbard is pretty basic, with symbols mostly lifted from the new Iron Warriors decal sheet. I have tried to keep the look of the 28mm scale miniatures, but it is quite difficult. 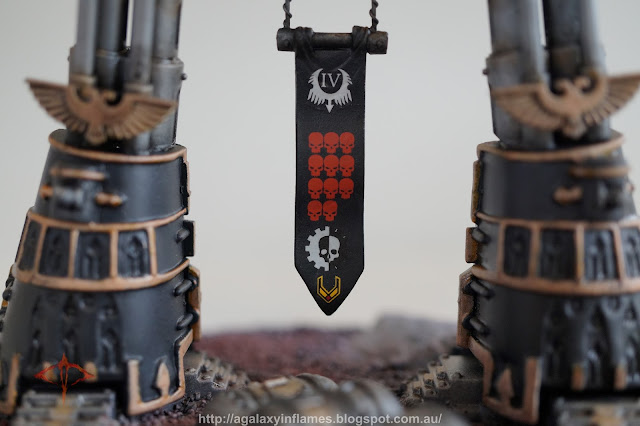 The base is a 100mm (4") wide custom job, 2mm thick styrene which I machined on my lathe. The power generator I added for some colour, along with the 25mm (1") resin inserts of rock. The gravel and sand was applied and sealed with the AK Interactive Gravel and Sand Fixer. 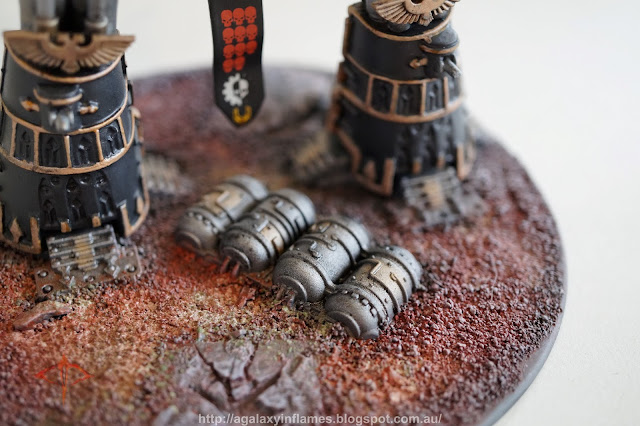 The wide variety of colours on the base was achieved using the wonderful Secret Weapon Miniatures weathering pigments. The colours used were as shown below, and sealed using their pigment fixer. 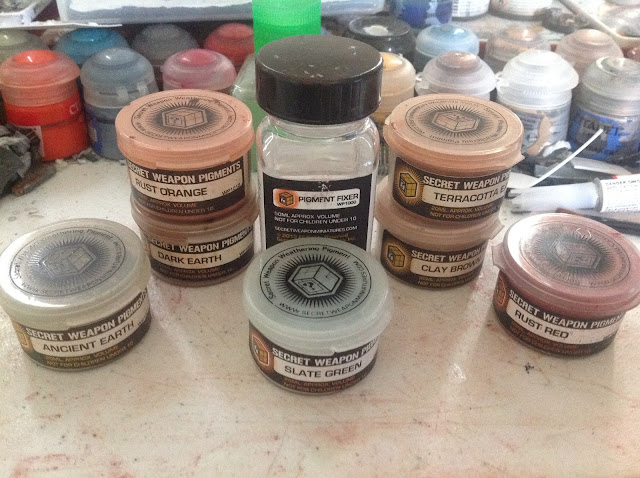 The results of a full mottling of all these colours has created a visually vibrant base, which despite being 4" wide is interesting to look at even with almost nothing on it. 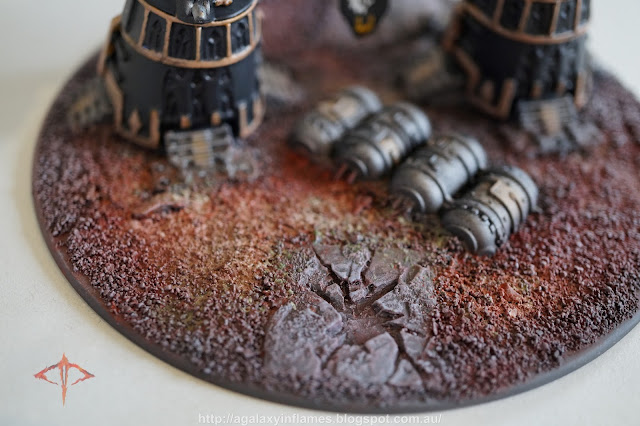 No shot of my epic is complete without a comparison shot with my 90's Iron Warriors in fancy Goblin Green based glory. 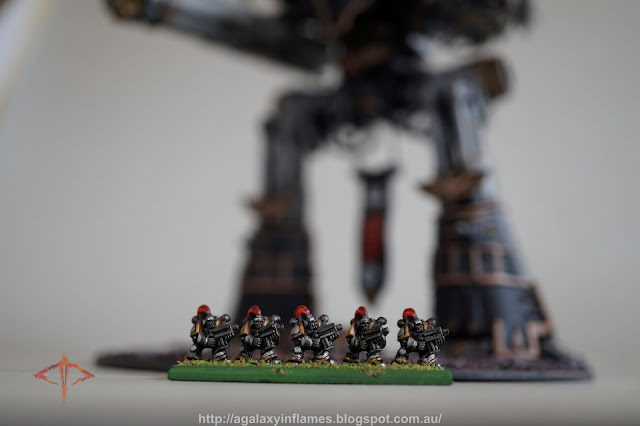 From this angle, you can really see the new upper legs, which lifted the model by about 35mm. The one down side is the rather static way in which they bond to the greaves, however, that was how it was on the original kit, and rather than lose sight of the original, I decided to echo the style as best I could. 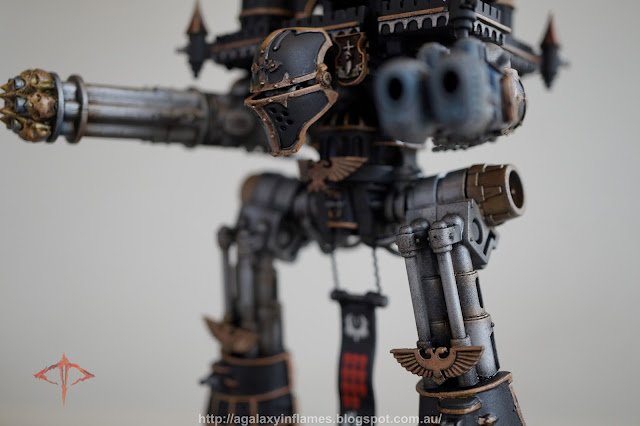 So there it is, the Dies Irae in all her glory. She's big, bad and powerful. I have 4 Reavers and 4 Warhounds planned at this time to fight alongside her, and as a full force, they will actually fit on my display shelf! So, did I get it right, or have my changes negatively affected the model form the 90's? Let me know below.