So with most of my buildings done, it is time to dress up the tiles which they reside on. I have tried to cut the cork bases on the buildings as square as I can so it would be easier to add strait materials to the tile like plasticard. I lined up the buildings to sit in the centre of the tile and traced the outside area. This would be covered in a plasticard with a tiled pattern, it would sit lower than the cork creating a double or triple level effect and it would also allow the building to sit in a recess, so it would not move once placed down on the tile even if knocked. I also used some strips of plasticard to line the outer edges to tidy up the tile.

I began work in the corners and worked my way out a piece of plasticard at a time, constantly checking and rechecking with the building foundation. A few dabs of superglue fastens the plastic to the MDF really quick, so make sure you have it lined up right the first time! 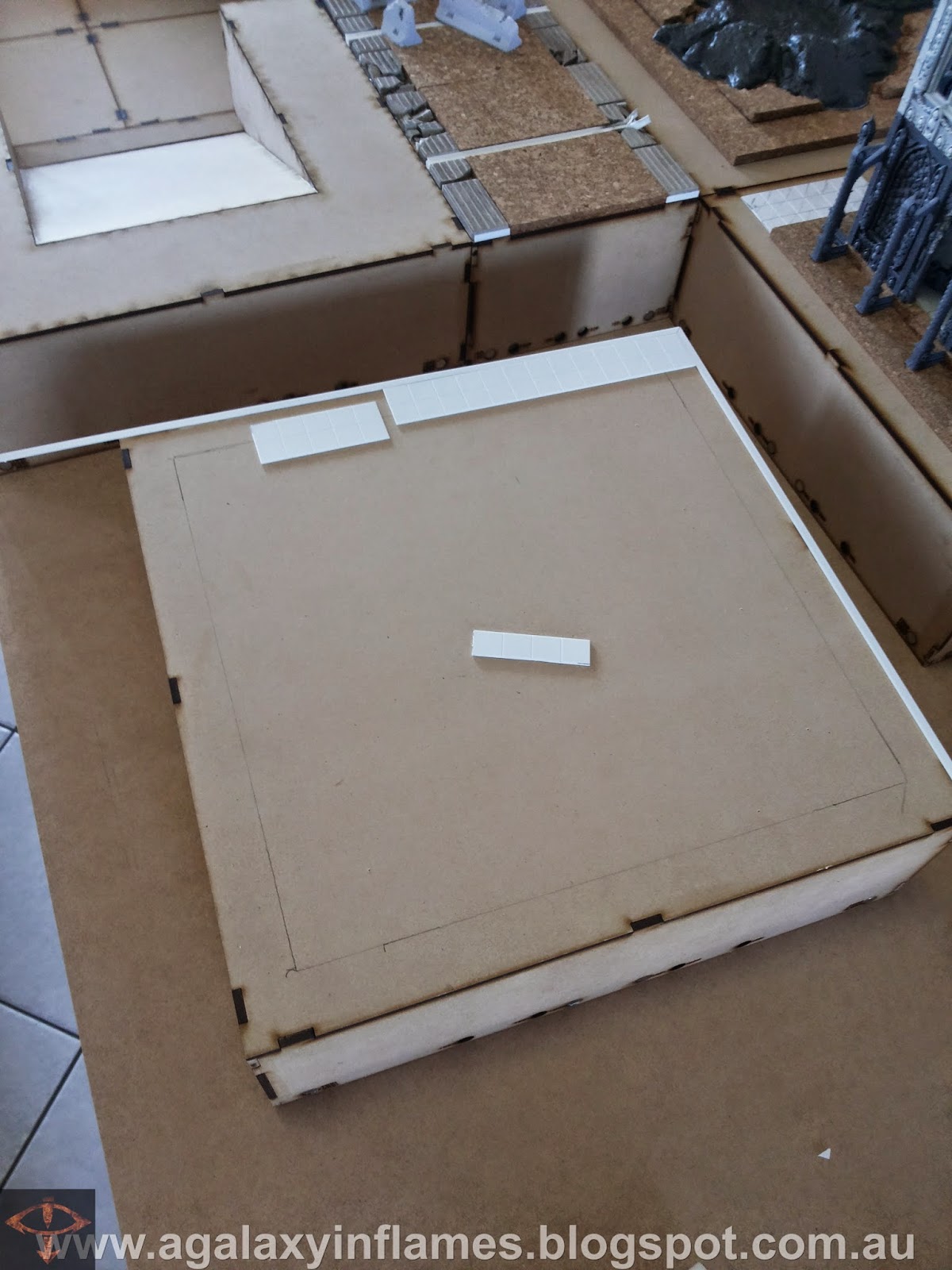 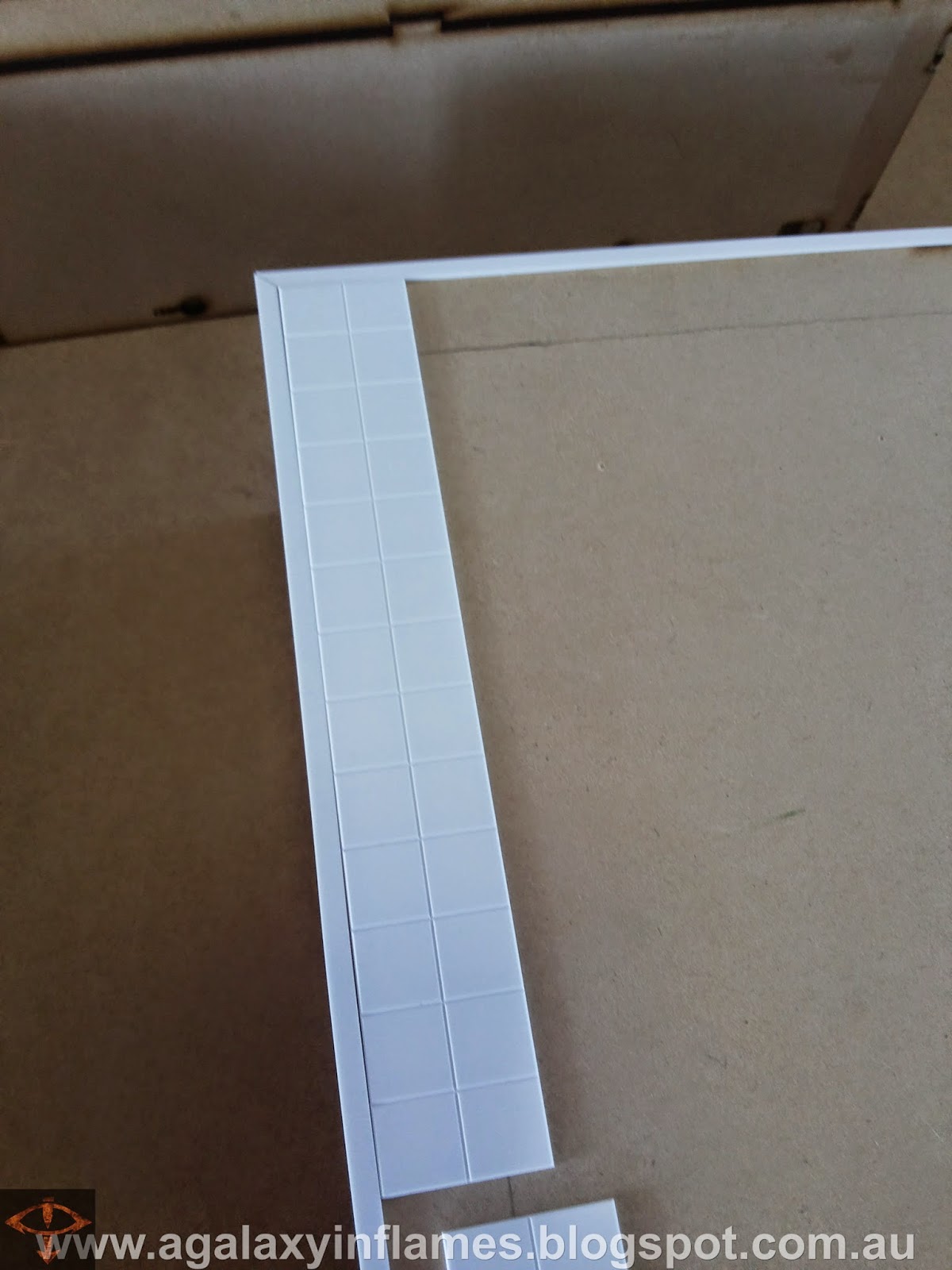 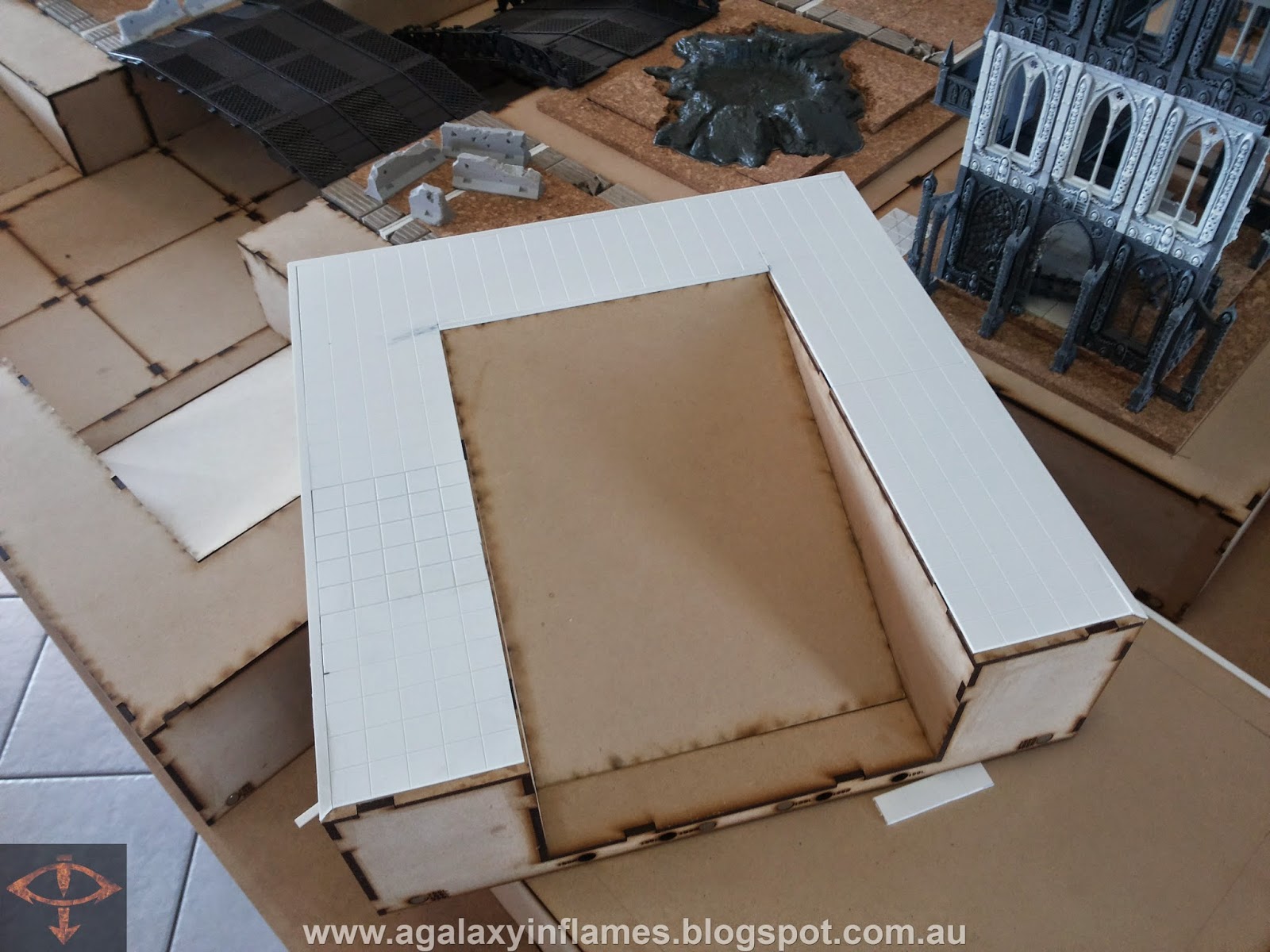 There were a few minor stuff ups with getting the lining strips right, but I can hide those with some rubble later... sshhhh 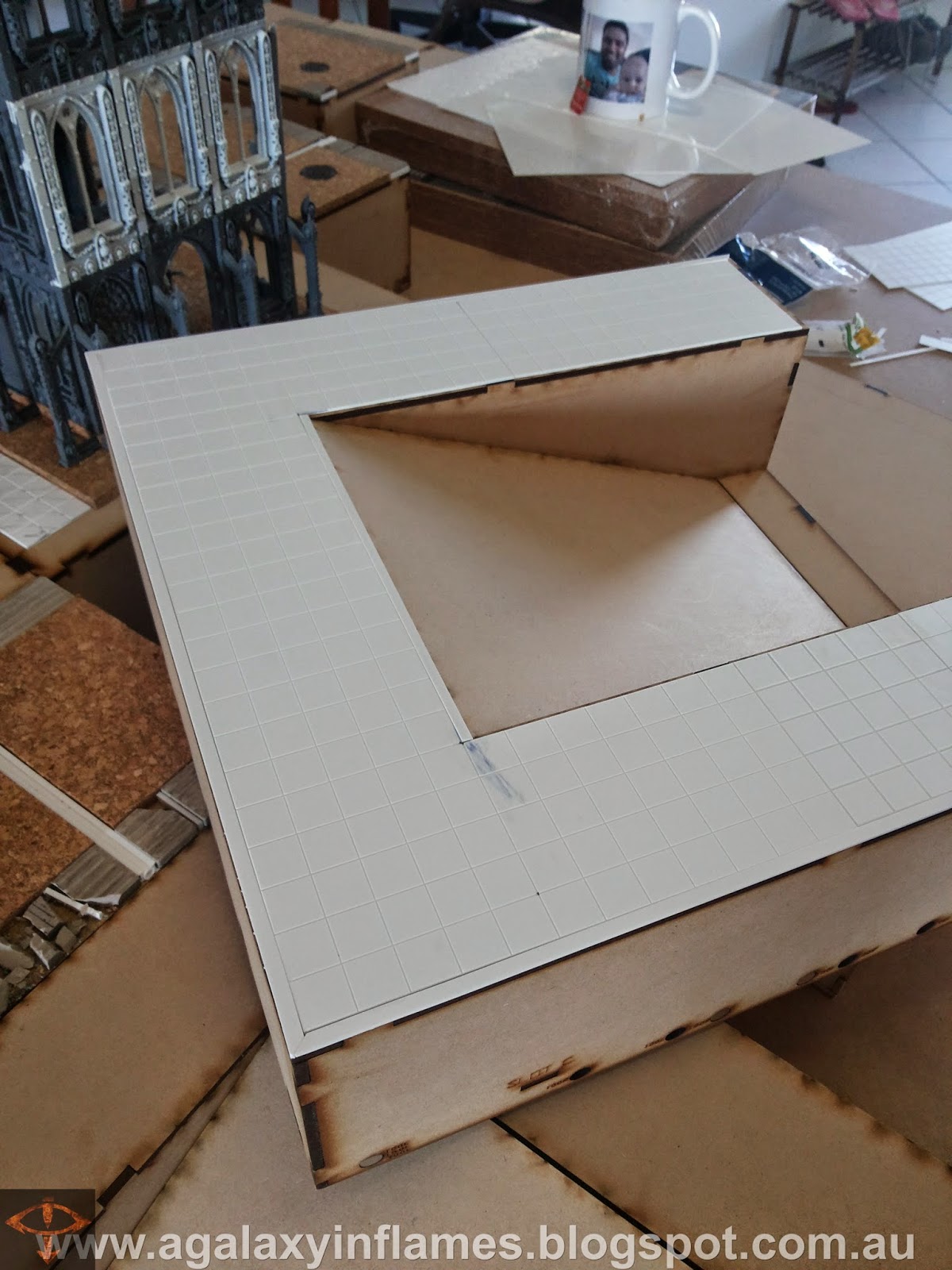 Back to the buildings, working my war around the Bell tower. You will probably notice that some more work has been done to the base of this building with some rubble, I will cover how this was done in a later post. 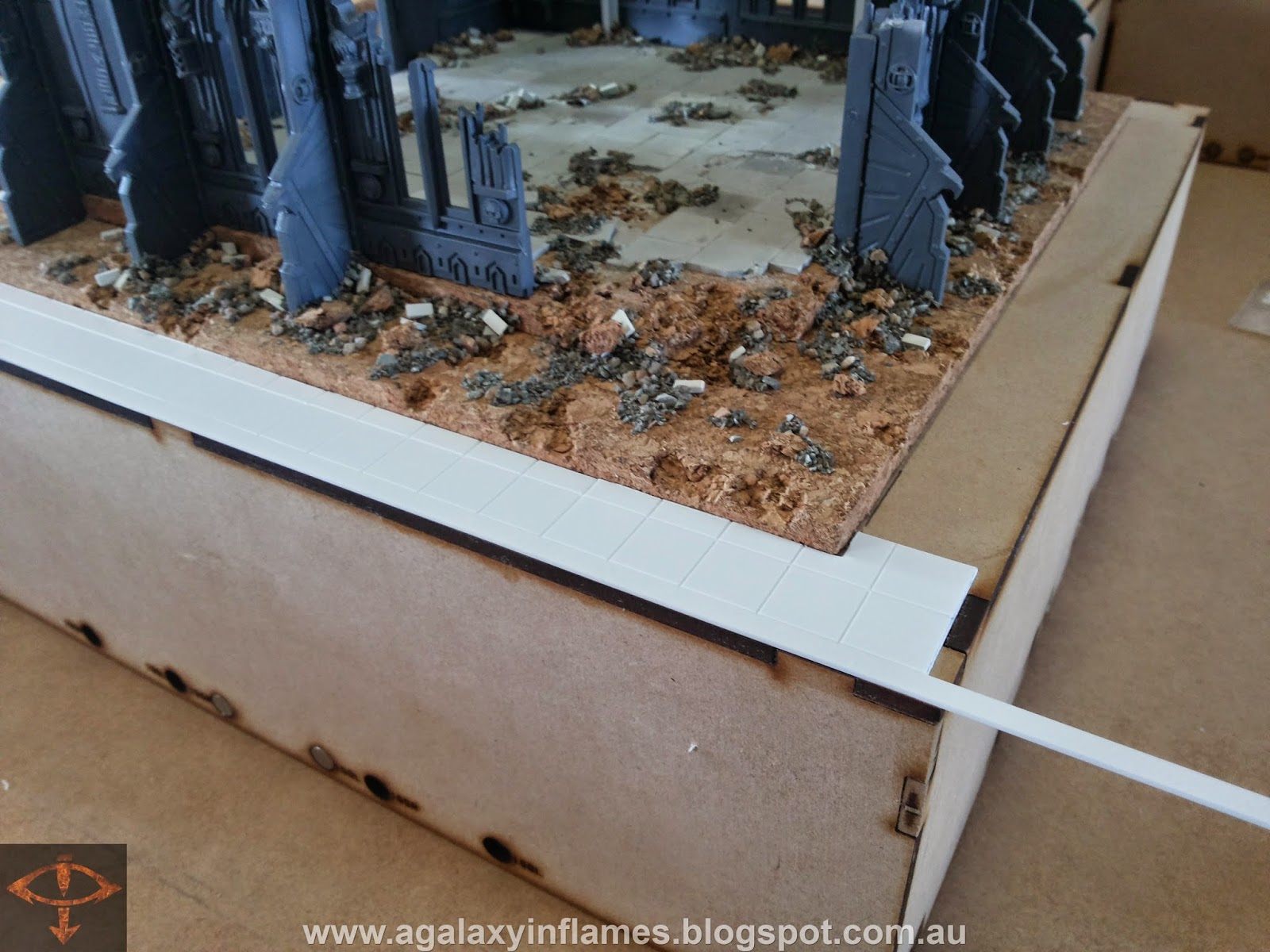 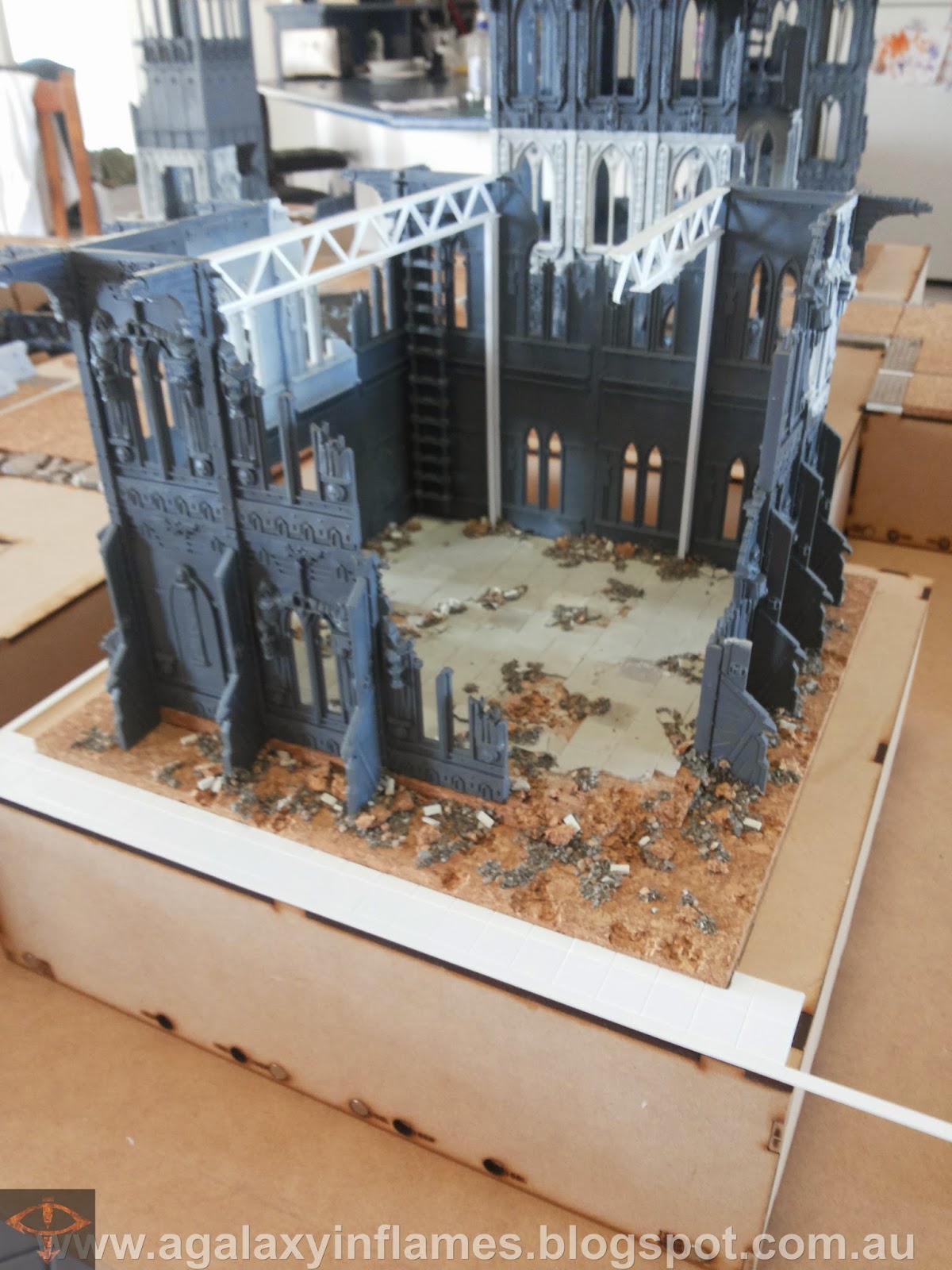 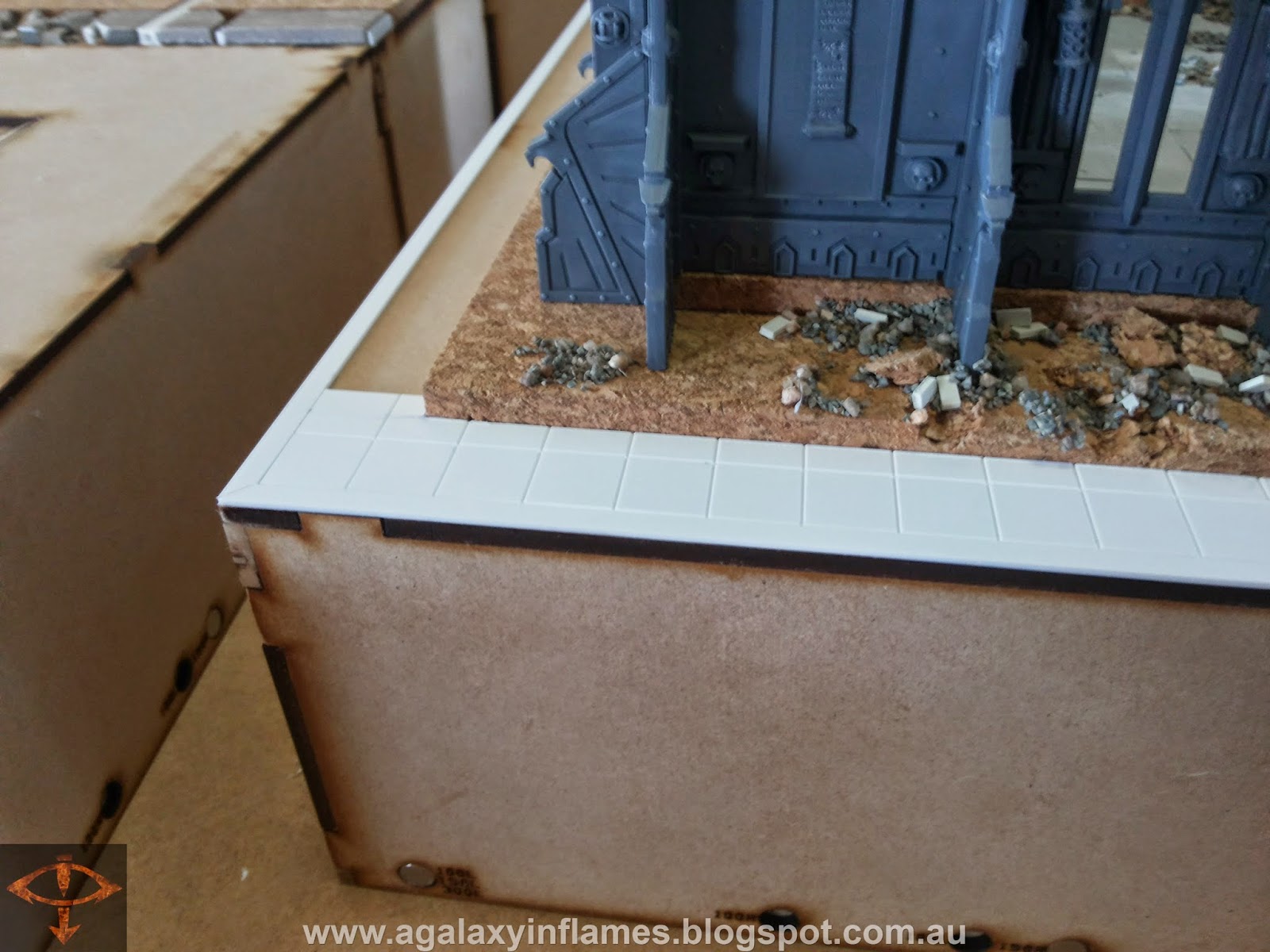 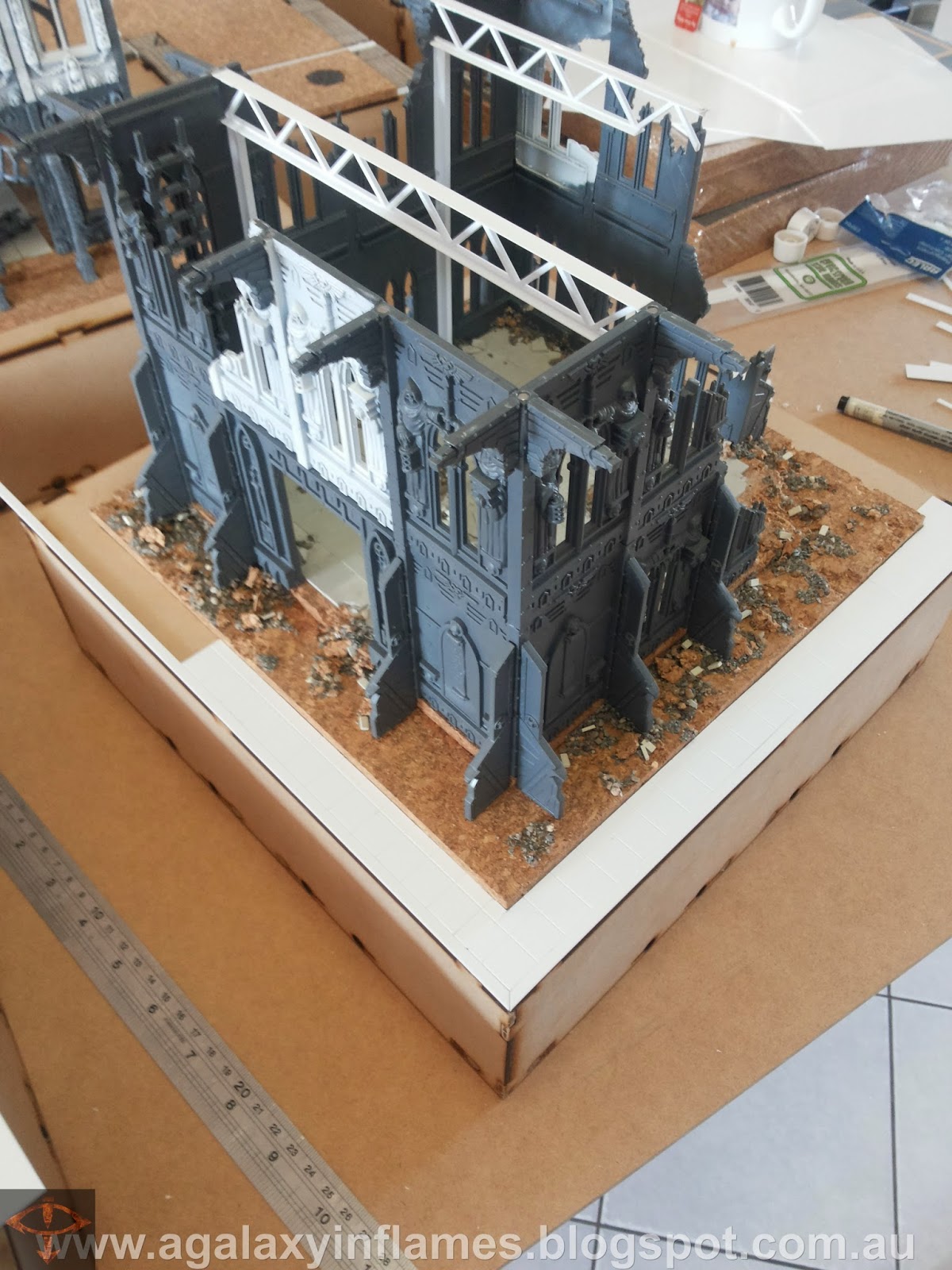 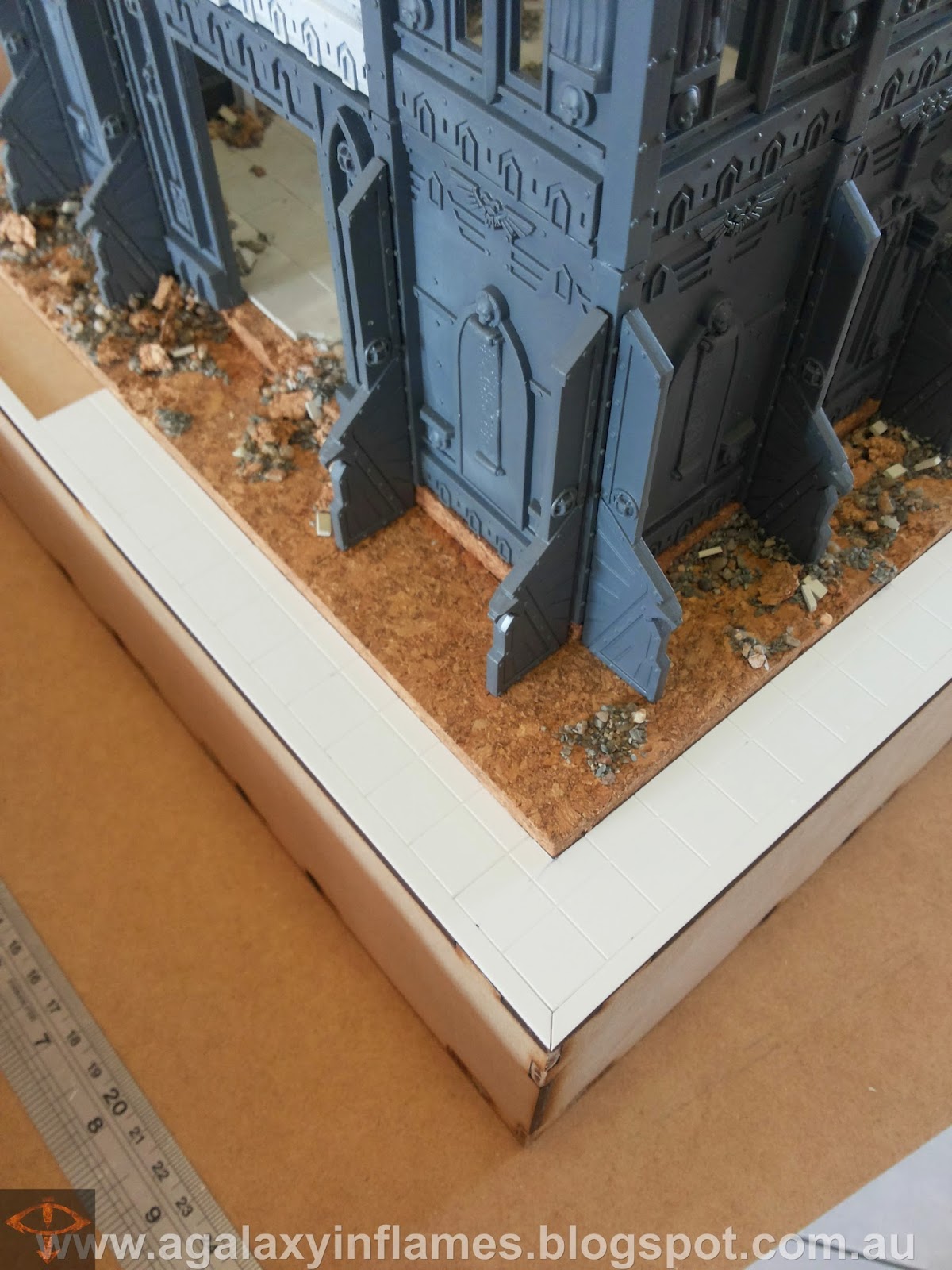 Simple yet effective way to get texture on your tiles. You just have to be dead accurate with your borders or your tiles will not connect together properly if you have overhanging plasticard. If you have got some overhangs, you can trim them up with a sharp hobby knife or give it a light sand with a sanding block to bring it back level with the side of the tile.

The other thing I did was add some drains into the tiles. I got these plastic drains from a company in the US and they work really well, adding some more detail and realism to the tile base. If I had the time I would go all out on these, but I really need to get this project done! Their position was marked out on the tile then a hole was cut with a rotating saw tool (aka Dremel). These drains have a plastic outer casing so you can glue that in place while still being able to remove the drain cover. I plan to later have some flashing lights under the tile so it looks like there is a gun battle going on under the city or someone has set the sewer on fire. 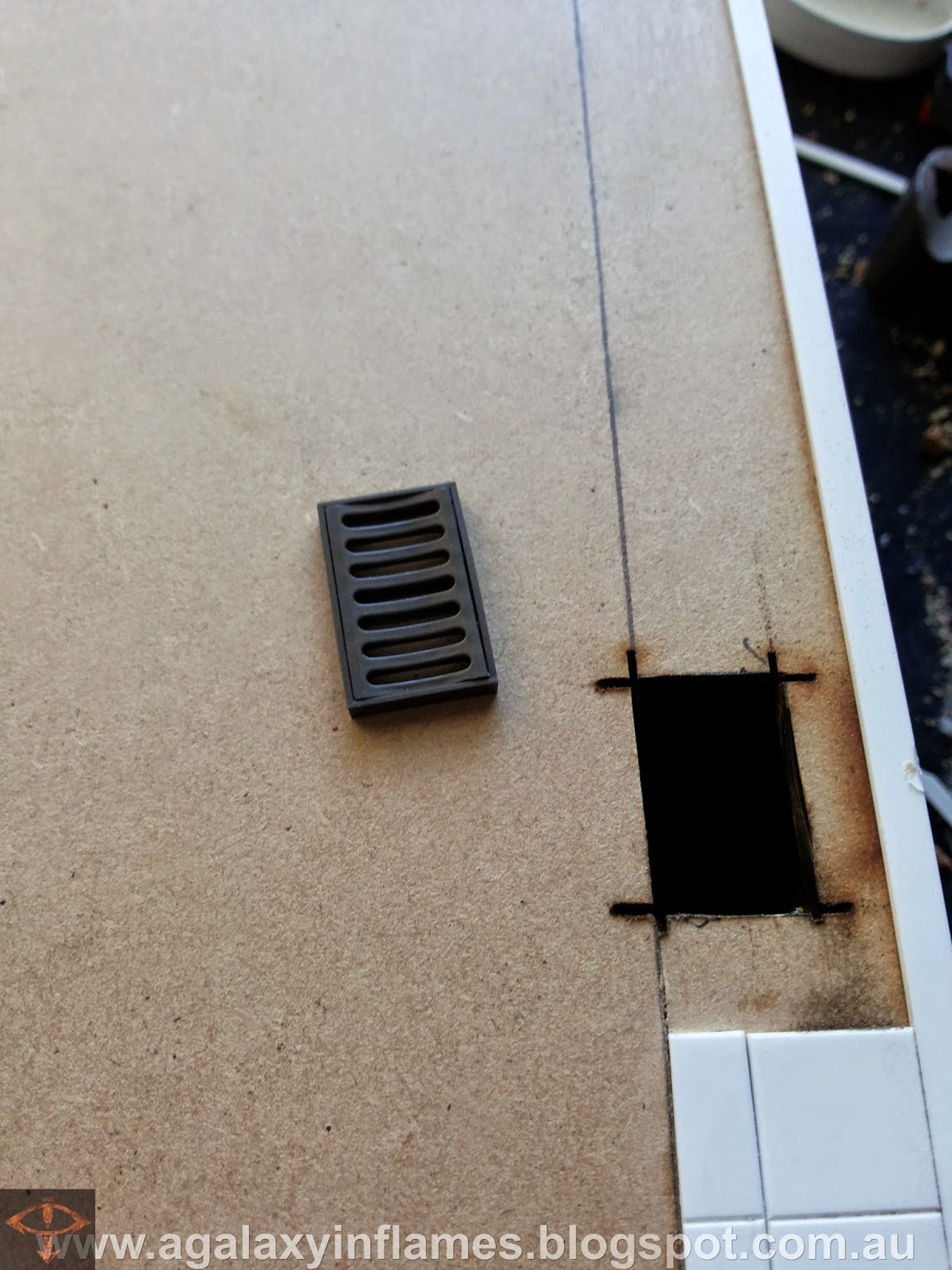 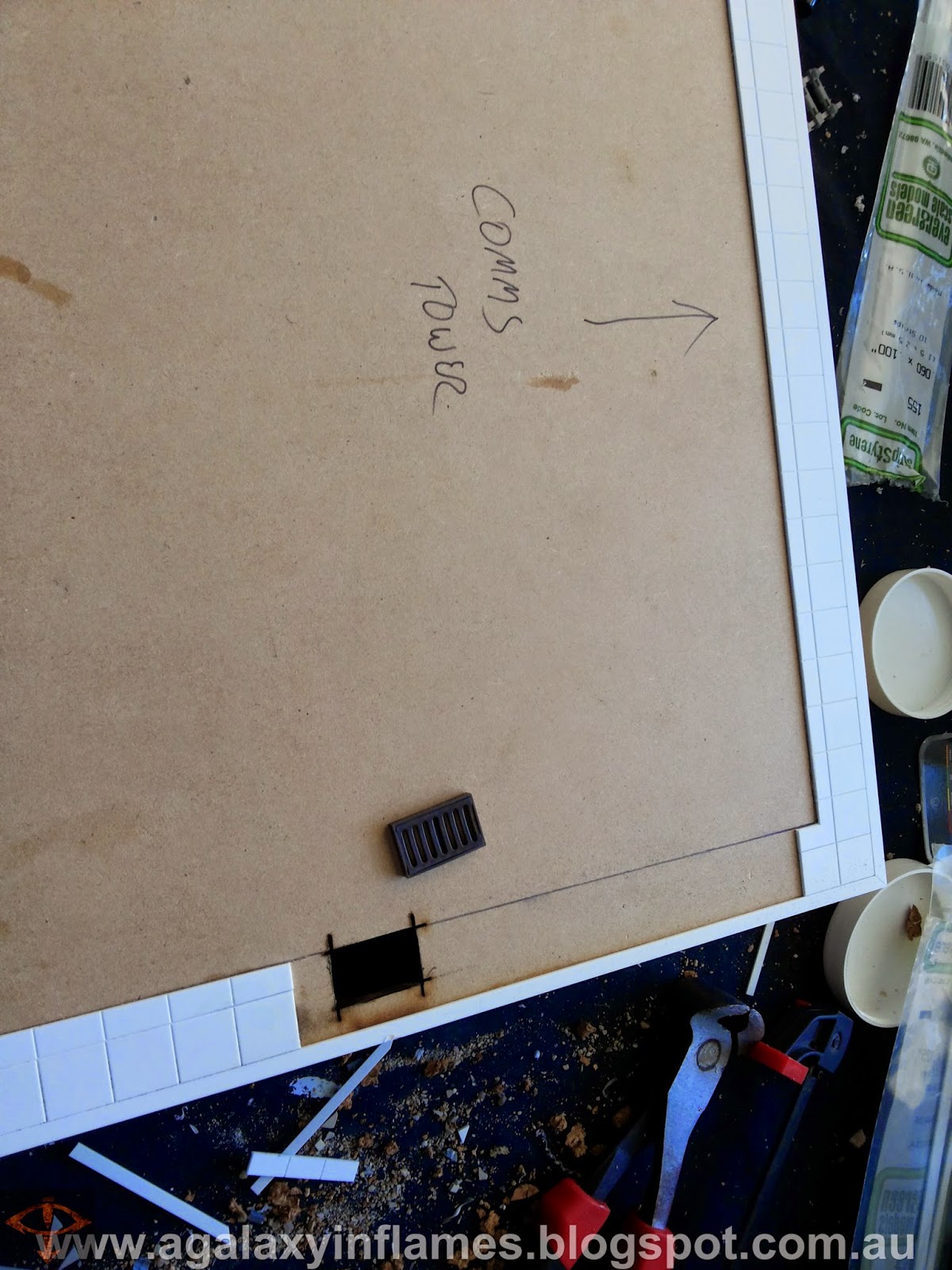 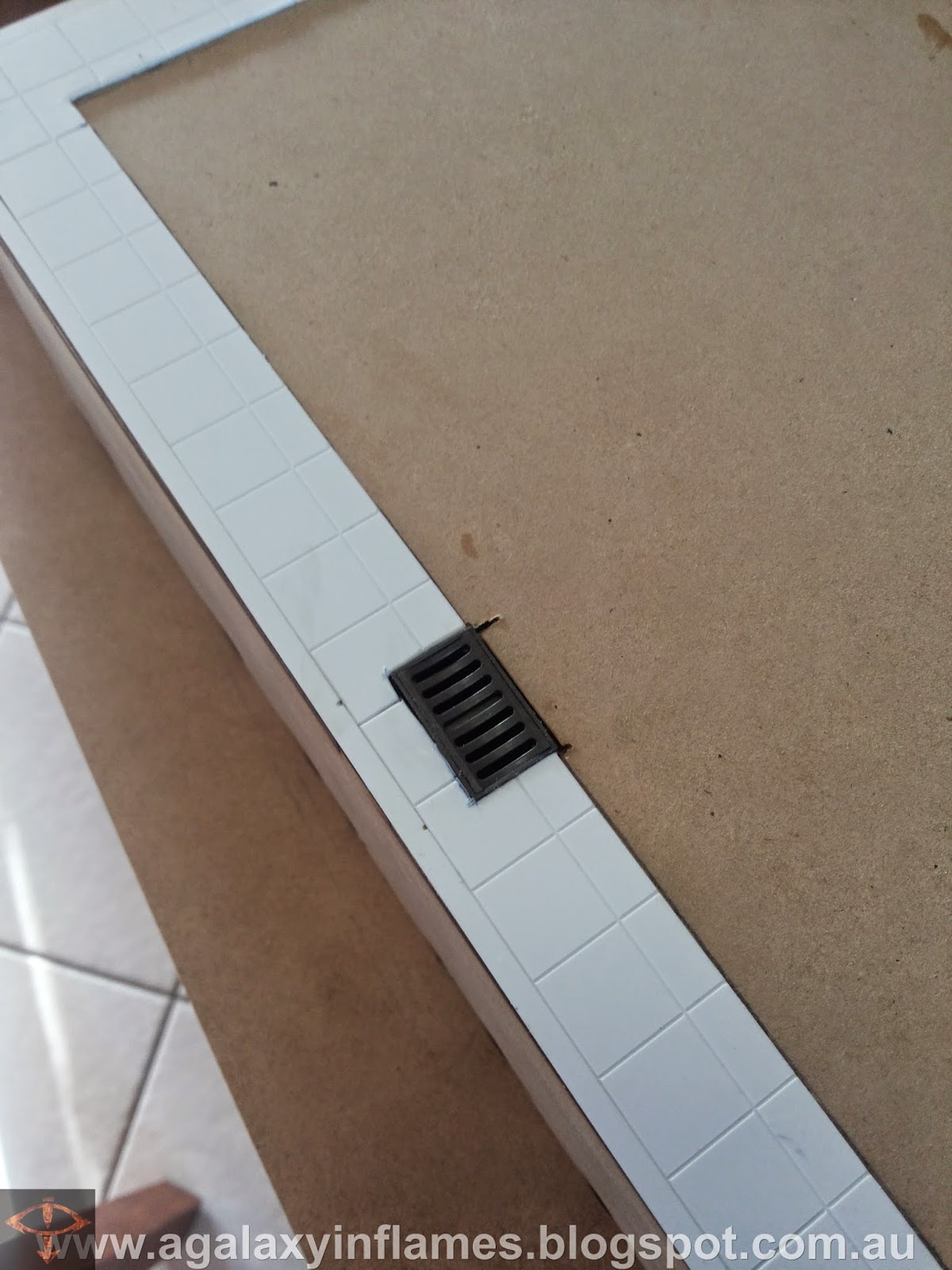 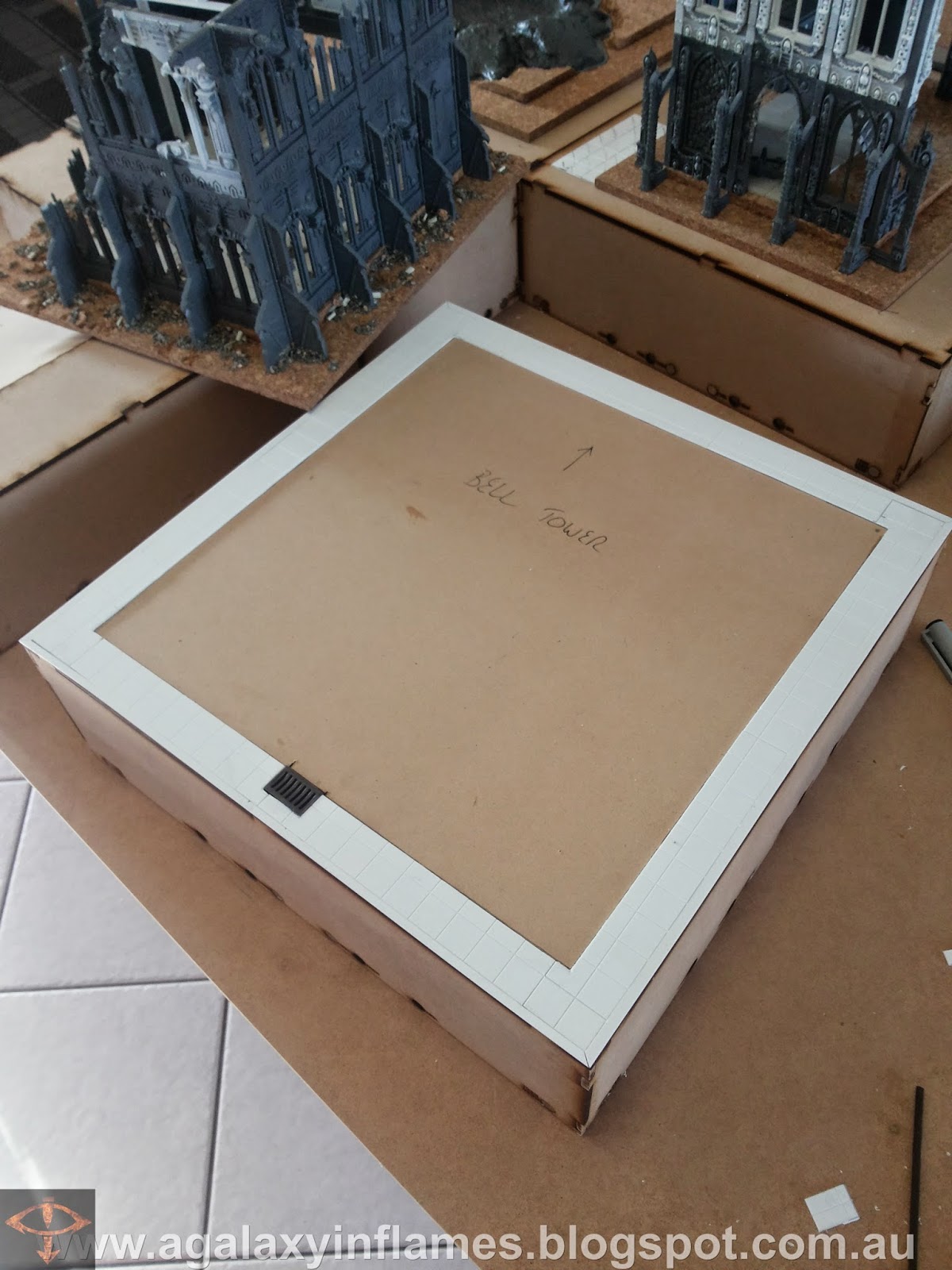 So here is a quick look at the city as it stands, prior to the top of the tiles being done. 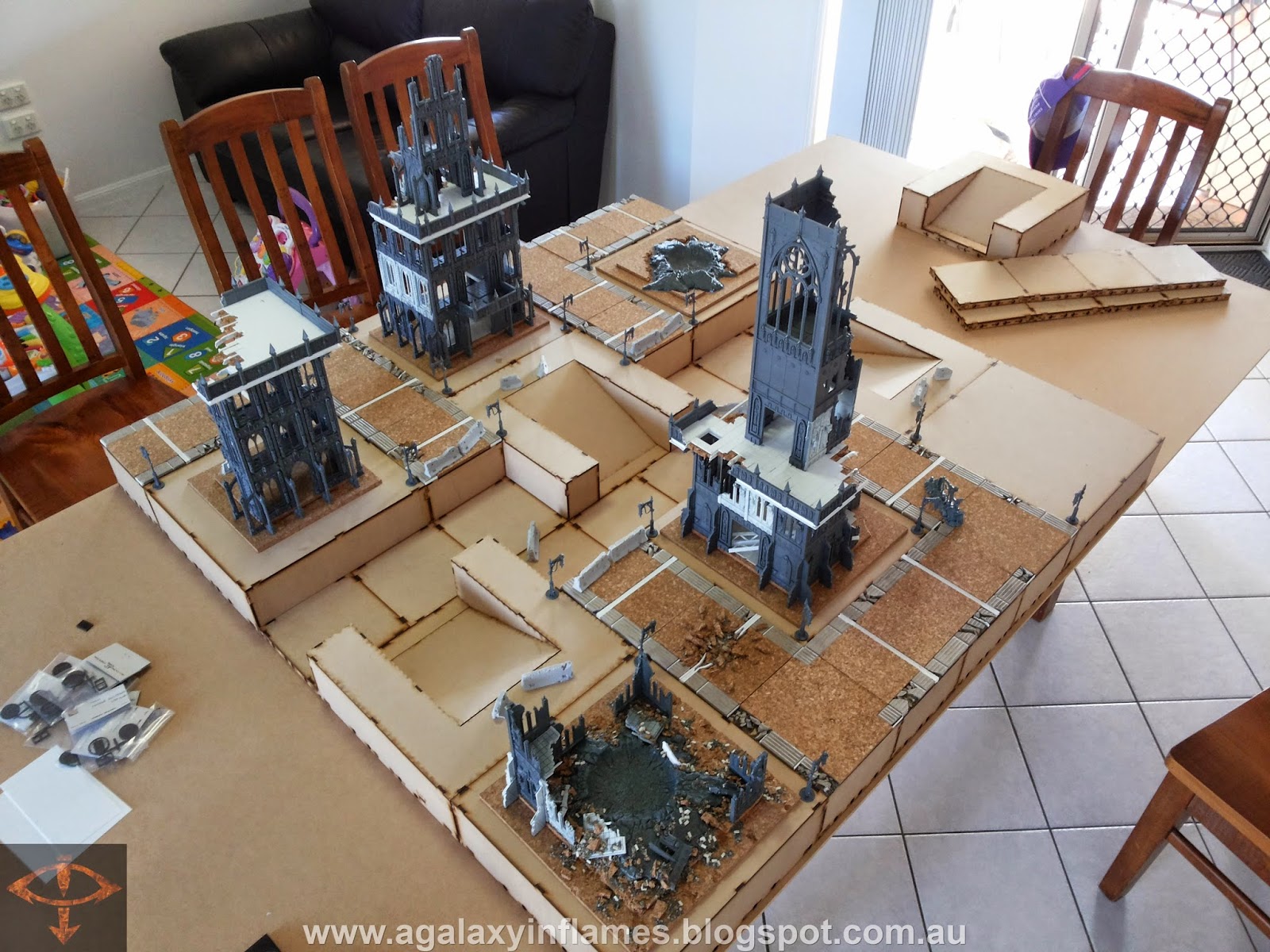 Bell Tower now has it's own completed tile. This will now be permanently assigned to this tile. If you want to move the building around, just move the tile around. Simples. 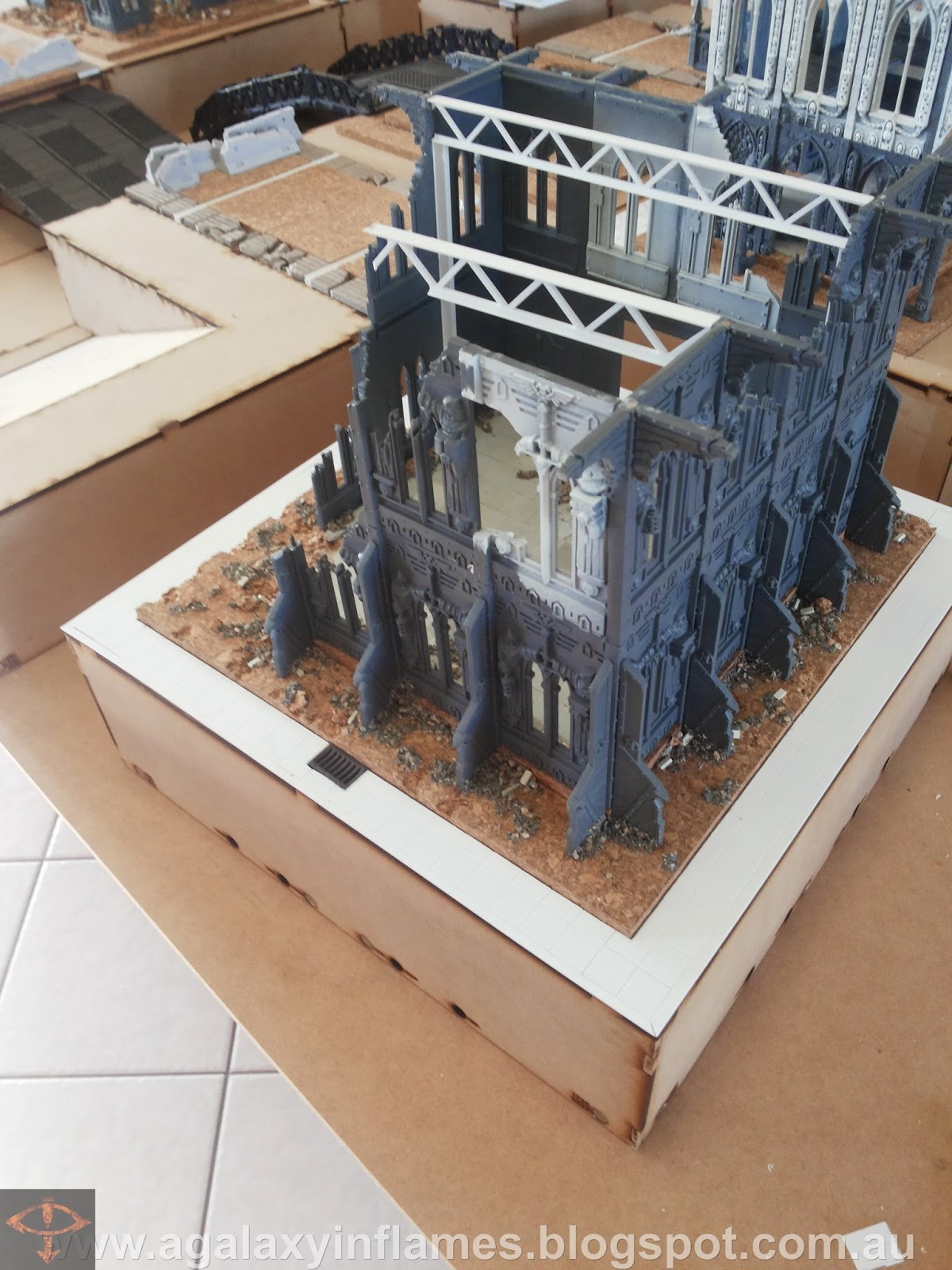 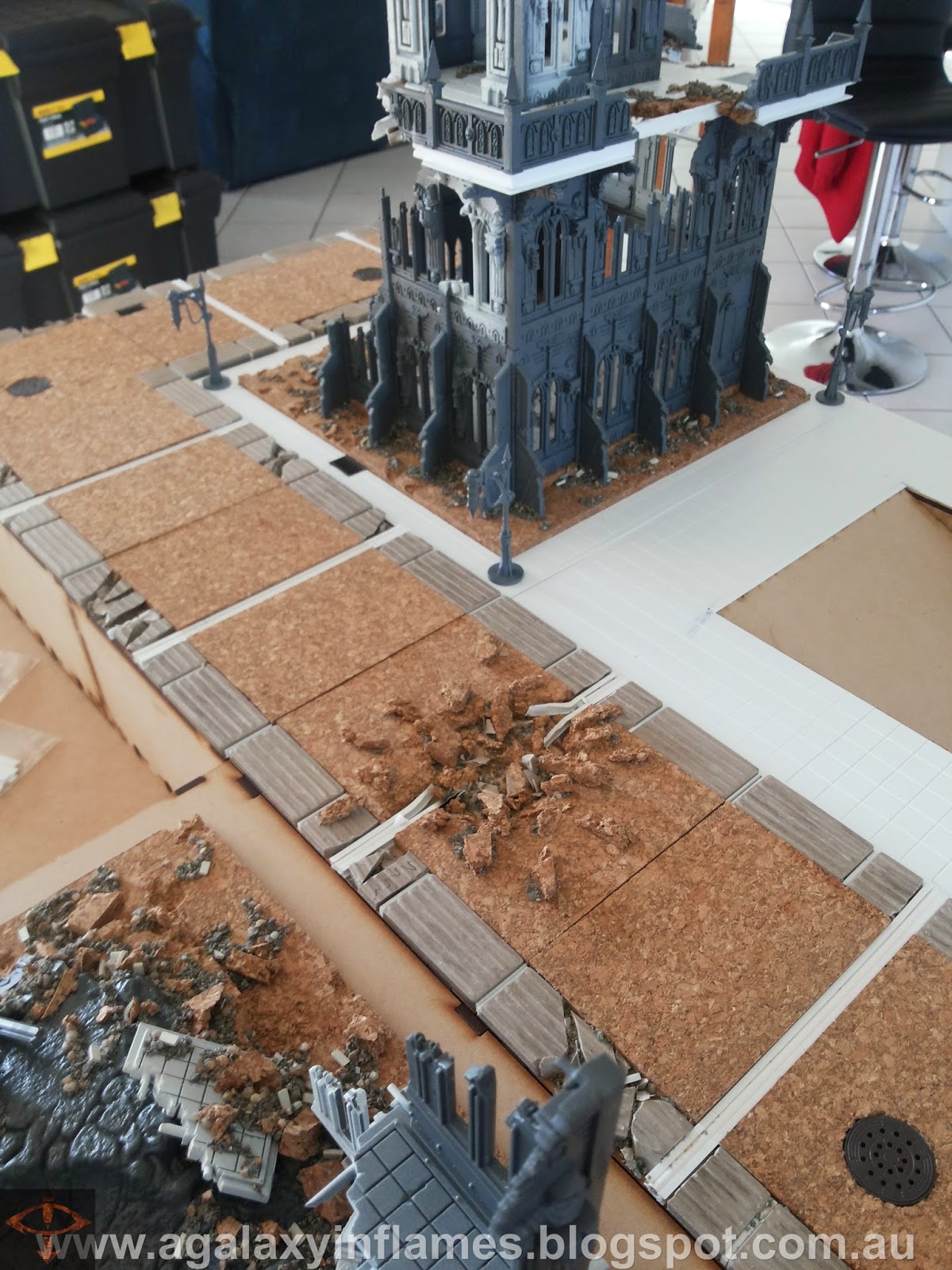 A peek down the street... 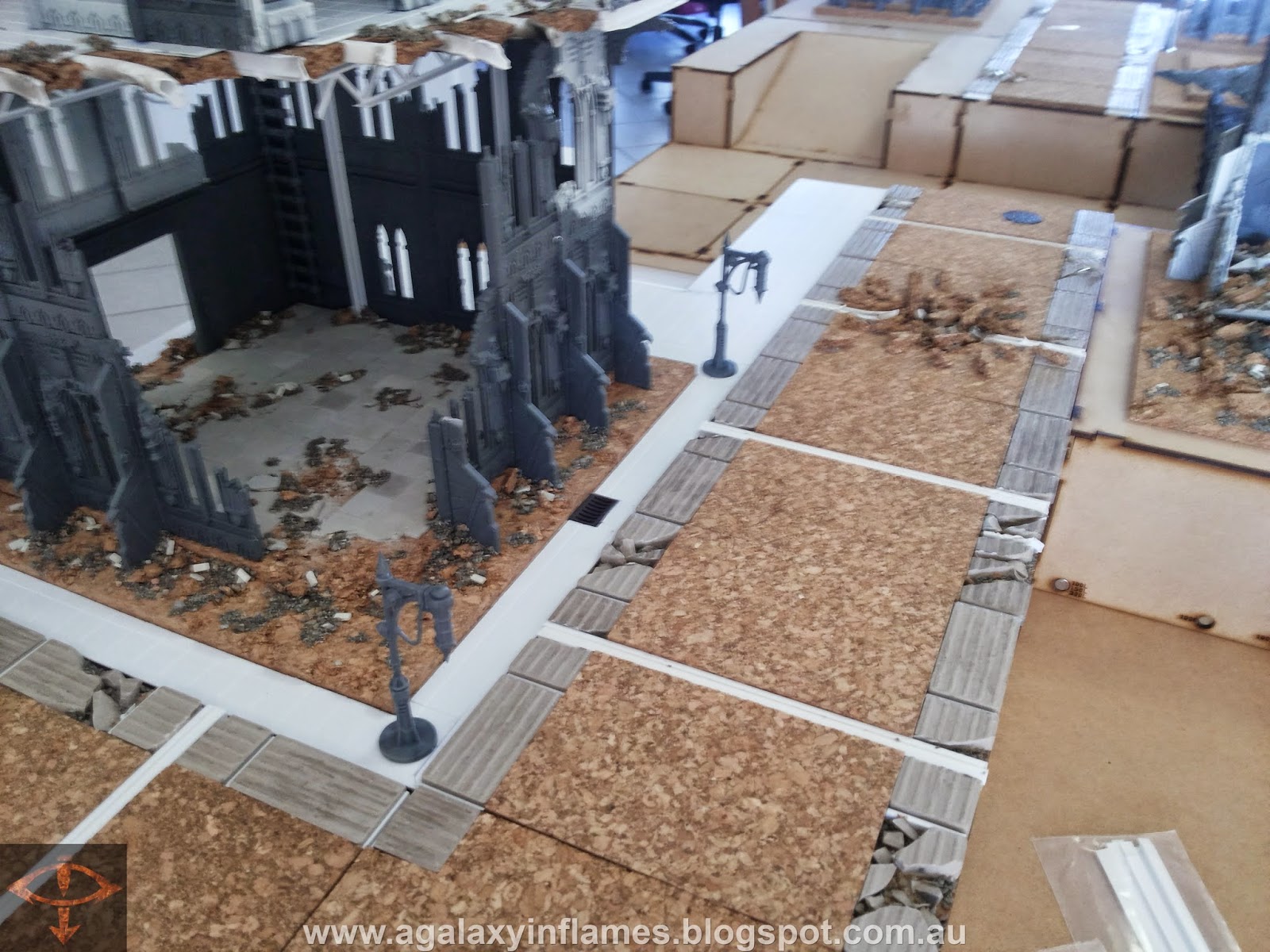 You may also have noticed the lights are up as well. I magnetised the bottom of the lights then added some really powerful magnets underneath to really make them stick. The advantage of the magnets are that the lights do not hinder storage, and can also be removed during game play if a tank or something runs over them.

The magnets were lined up by placing the pre-magnetised light post in position on the top, then adding super glue to a magnet and letting it self align. This is underneath a ramp tile, and I have placed magnets in 6 locations for a bit of variation with light post locations. 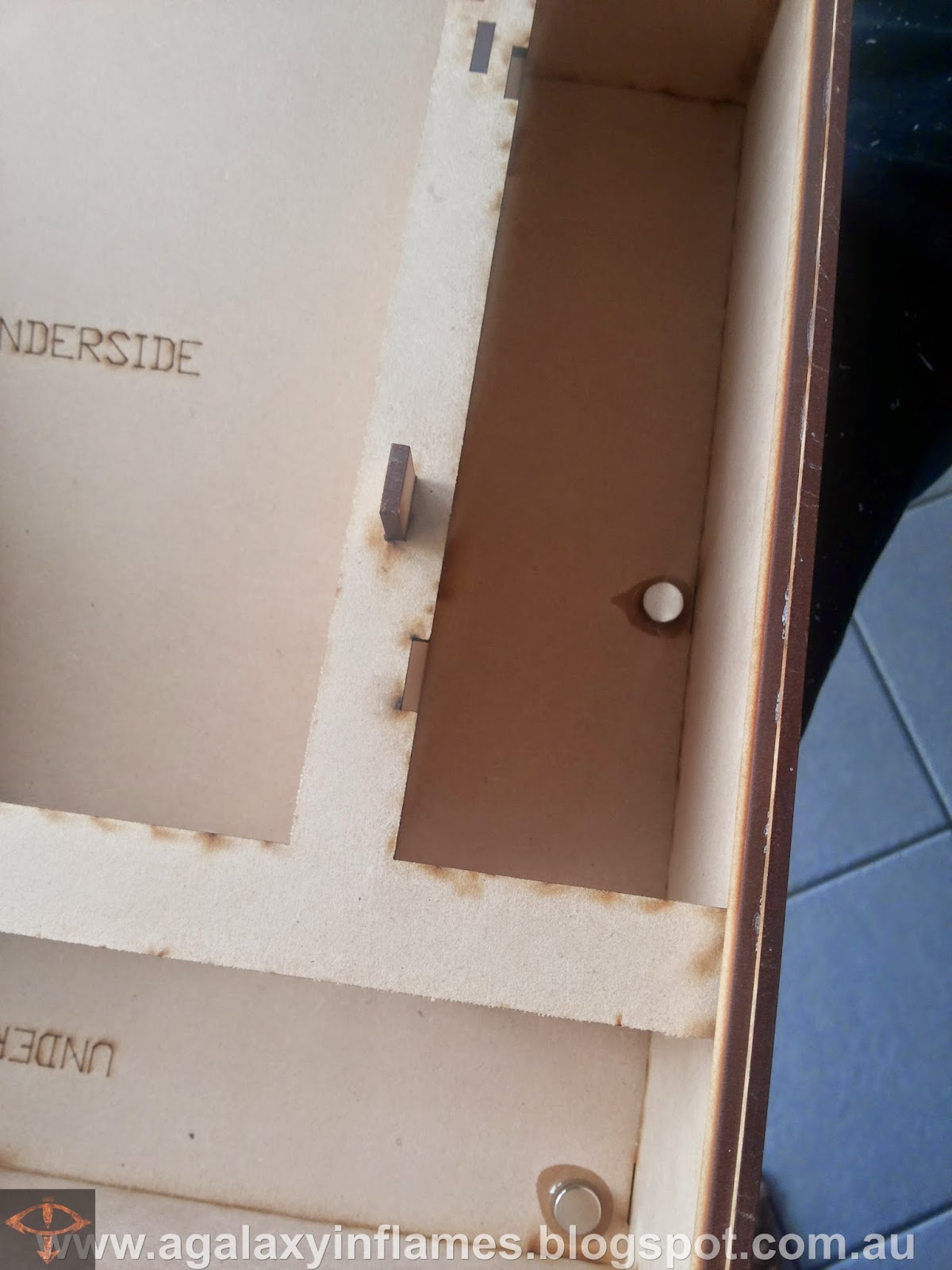 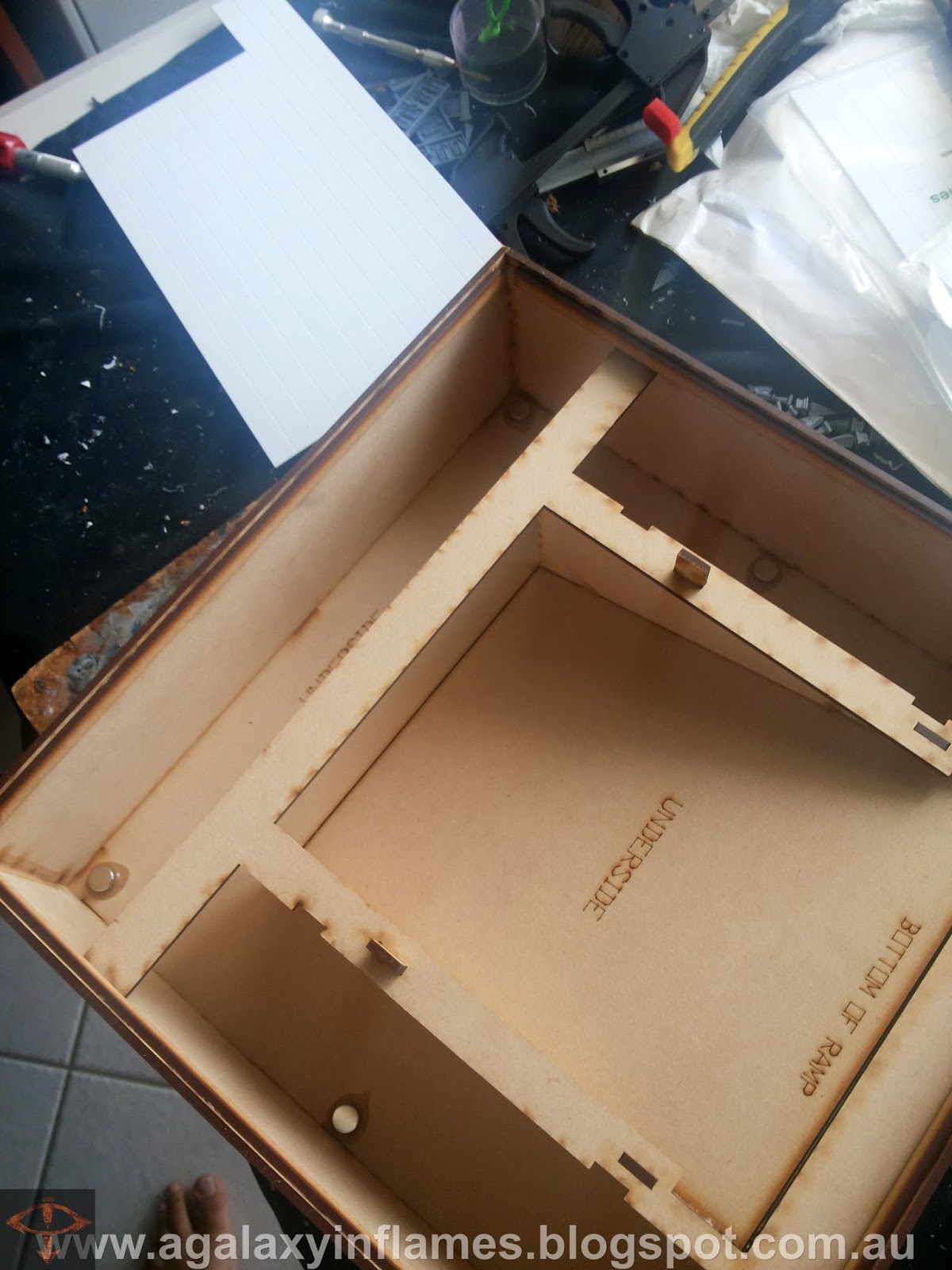 With the top section of the ramp done, I added some textured paint to stop models from sliding down, an issue I have had since day one. 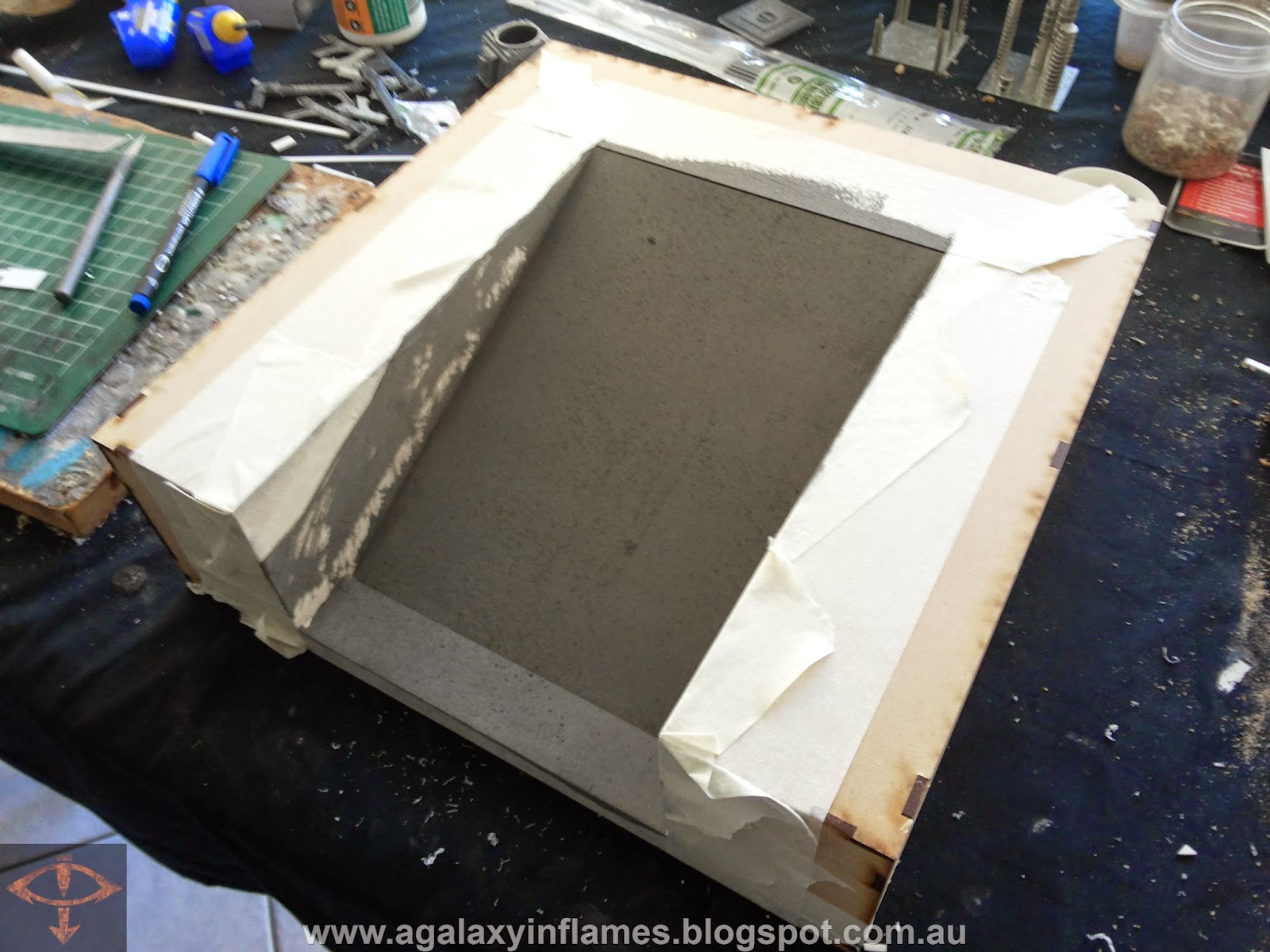 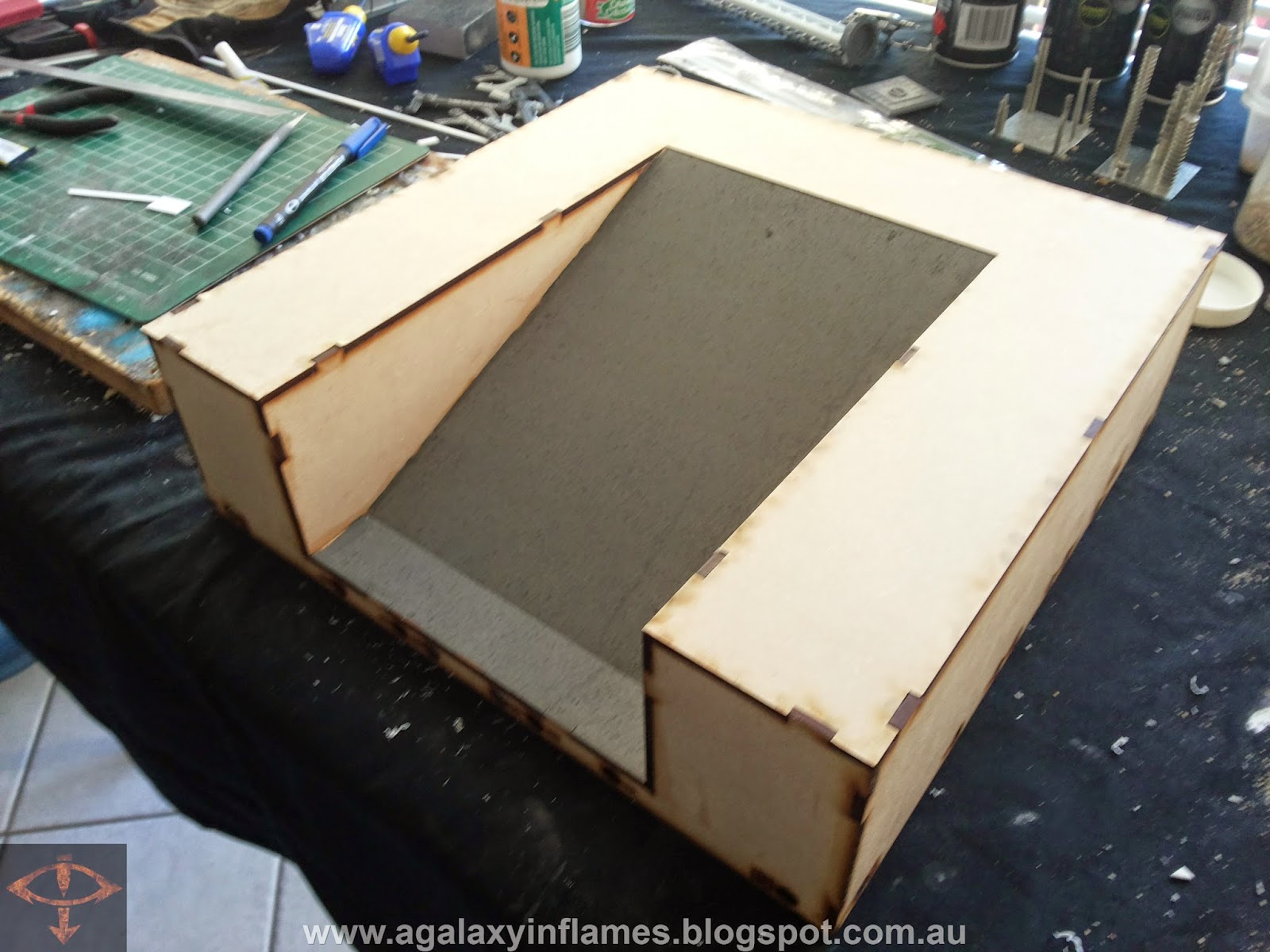 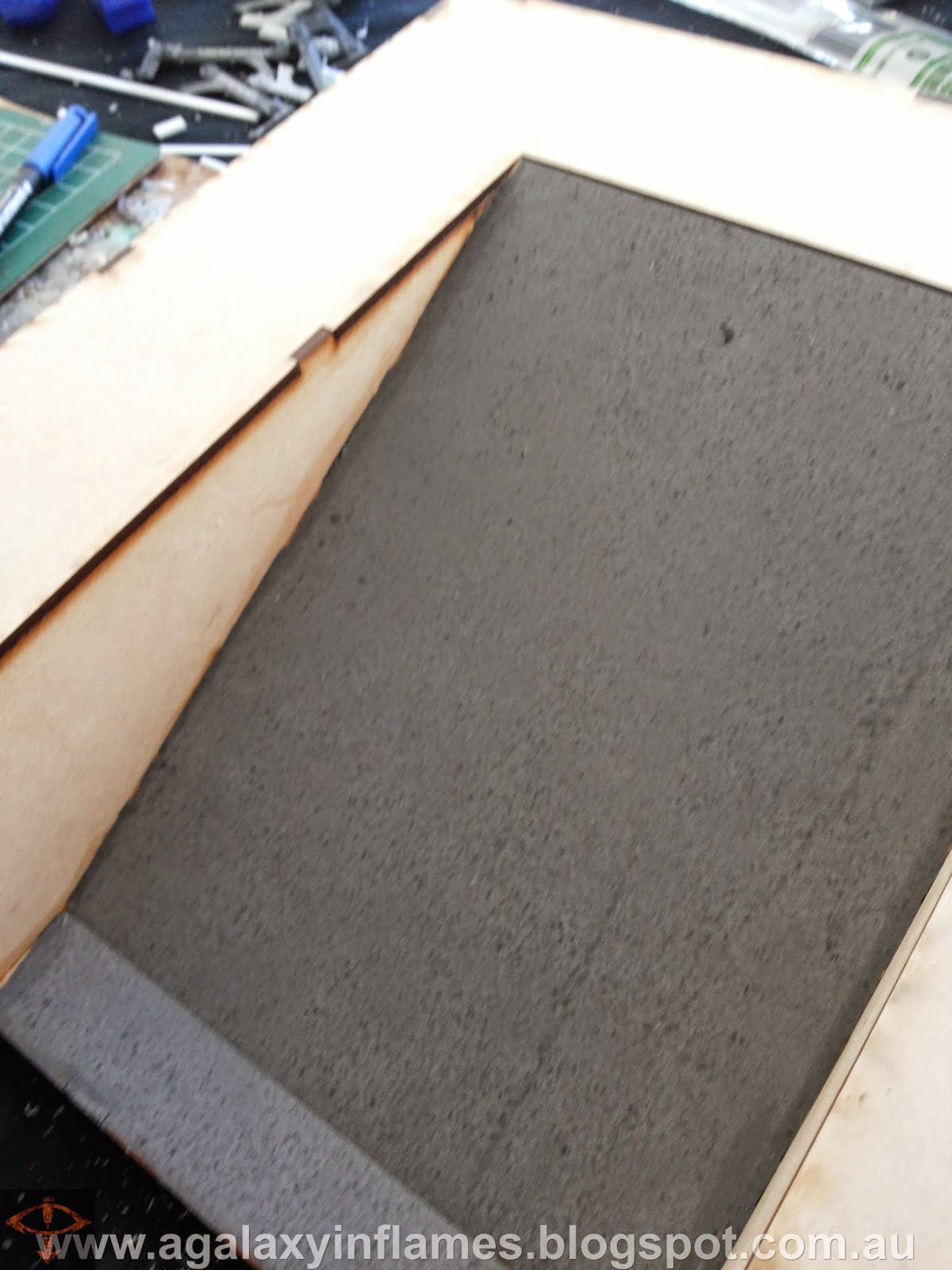 And guess what? It didn't really work. The texture works fine for GW bases, but if you are using resin ones (like myself and many others) then they just keep on sliding. I had already painted all four ramps so a bit of improvisation came thru with the solution. Ben from "A Traitor's Hand" suggested that I add some kind of drainage channels like you see on boat ramps. I made up a few "Vs" from plasticard strips and placed them on the ramp 40mm apart. This allowed terminators and large models to fit on the ramp without compromising the aesthetics. 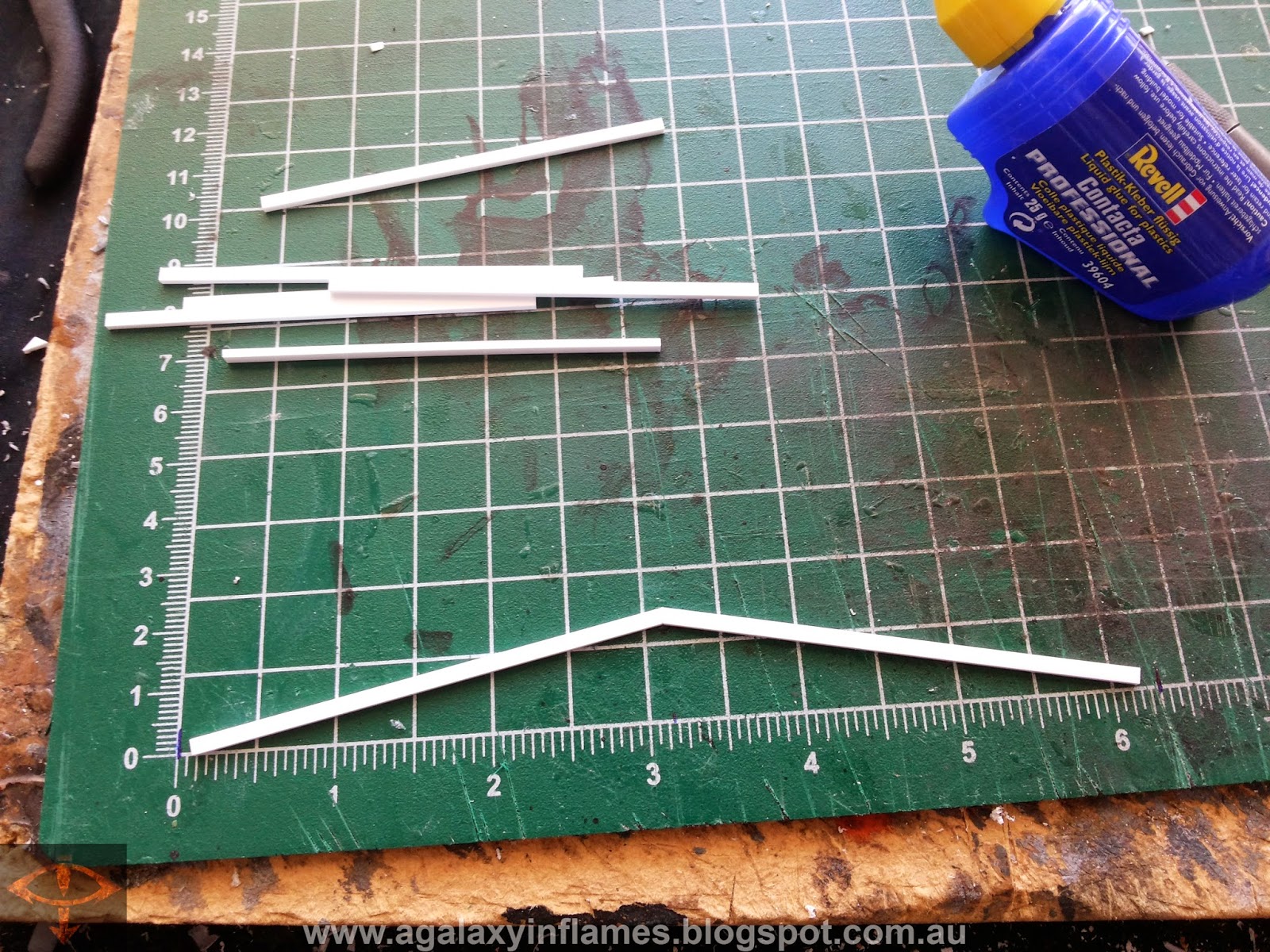 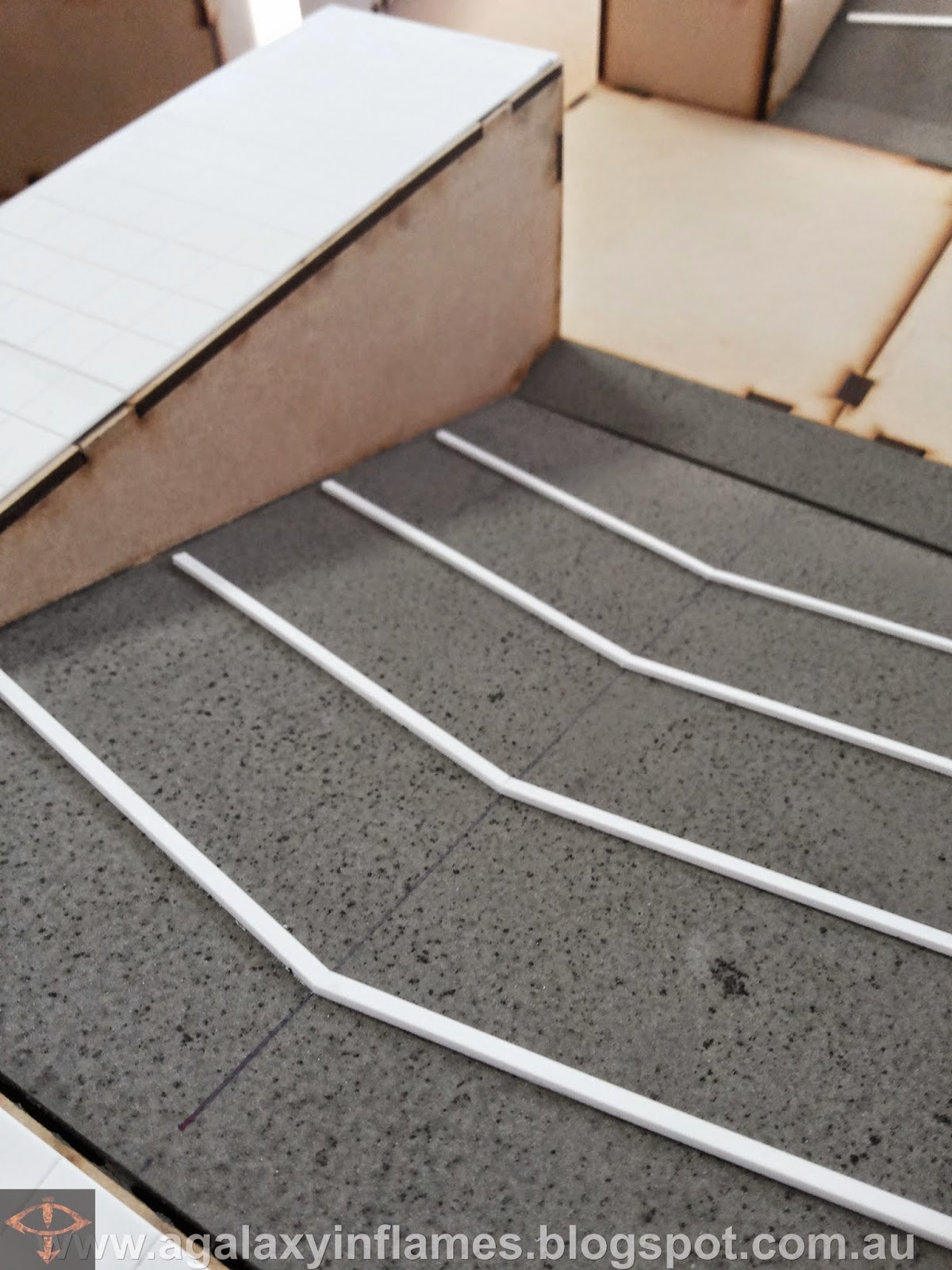 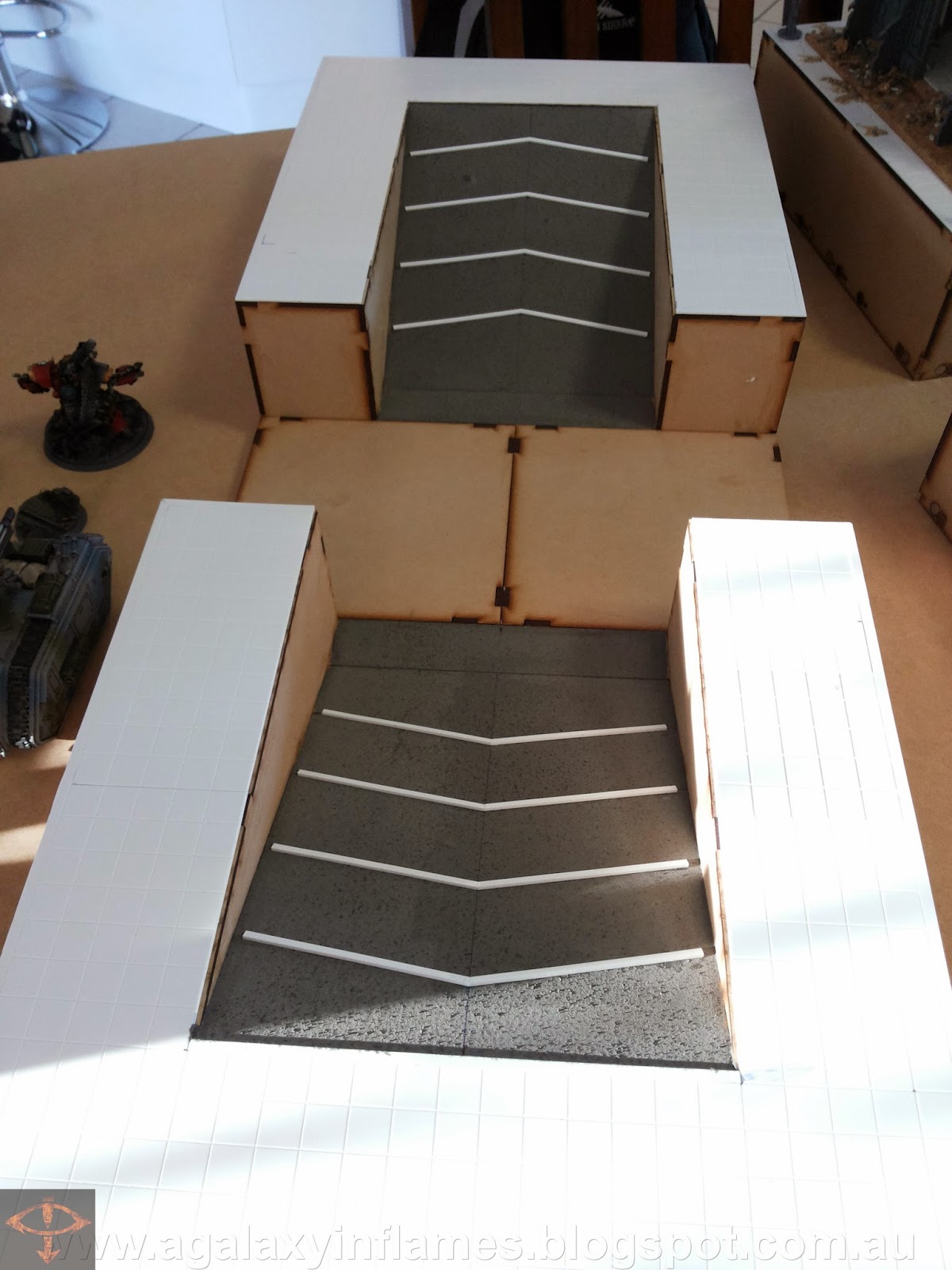 And it worked! It even holds up Castellax, Dreads and Tanks so problem solved. I will have to paint them up in a hazard strip look.


Well, it has been a busy week but there are a heap more posts to come for the Istvaan III Table build. I am happy with how these had come out, they still need battle damage but the hardest part of the build is now over.

As always, your comments and critiques are most welcome.