G'day folks, Macca here and today I'm going to talk about my new table, as well as some of my opinions on table setup. First up, the whole table is a Games Workshop Sector Imperialis, with almost entirely GW terrain (the fuel dump is from Forge World's Anphelion Base, and the crane is a scratch build of mine). 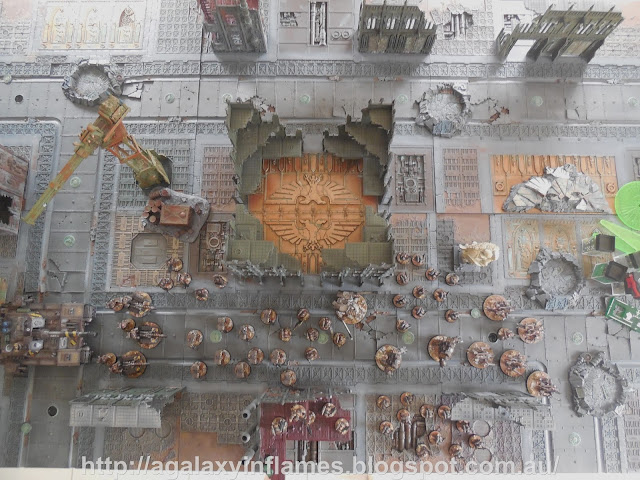 When designing this table, I had two key considerations:
-near symmetry
-unique buildings

The idea with a good table is that the sides should be pretty balanced. There's nothing worse than what I call 'Omaha Beach' tables, where one poor sod gets placed in an open field and the other guy deploys inside a fortress. Yes, by the way, I have seen it first hand at a tournament, a marine player was set up in open ground whilst a guard player had 3(!) fortresses of redemption to set up in, needless to say, that was a bit f%&ked.

So, that in mind, each side has 3 main buildings, a pair of craters, a pair of shared central buildings designed to block LOS so that total dakka forces can't just have their way (there are plenty of open areas, but you have to work for them, you can't just rock up and play like the Tau). I also added some unique buildings.

Unique buildings? Well, the idea here is that if I want to add a little extra depth to my games, such as a narrative campaign, these buildings can have special rules and/or be objectives in their own right. I have:
-Water Plant  (a single unit inside here gains FnP 6+, does not apply to MC's)
-Chemical Plant (one infantry or MC unit occupying these ruins counts as having shroud bombs and rad grenades)
-Fuel Dump  (chance to ignite when a unit occupying the dump or using it as cover is shot by a weapon S7 or over, or a weapon with the flamer rule type, on a roll of a 5+. A large blast S4 AP4 is placed anywhere on the dump by the player who ignited the dump)
-Power Plant (add the twin-linked rule to heavy-type las or lance weapons on infantry or MC units if they hold the building uncontested)
-Crane (grants line of sight to the entire map if held for the purposes of barrage weaponry line of sight)

These buildings have some crazy rules, so you can exploit them if you like, and it makes them worth capturing if you can, as much like a real battle, they represent some great objectives. A unit of Castellax with Darkfire Lances holding the power plant? DEATH. Anyway, you don't have to use any of my rules, you can instead use the Book I and IV cityfighting rules and ruins charts. 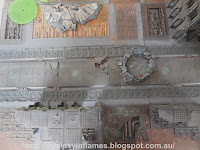 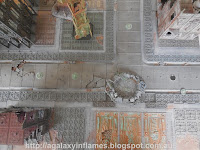 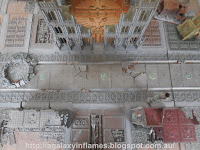 This side of the street houses two of the unique buildings, the Water Plant, as well as the Crane. Two regular buildings, a large broken aquilla and a pair of craters. The power plant is shared between the two sides, as is the large central ruins. 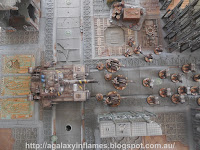 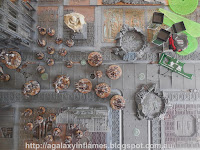 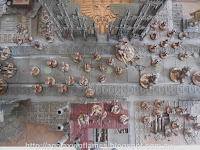 On this side of the street, the second half of the power plant is in place, as well as the Fuel Dump and Chemical plant. Two regular buildings, a large marine statue and the last pair of quake craters finish this side. 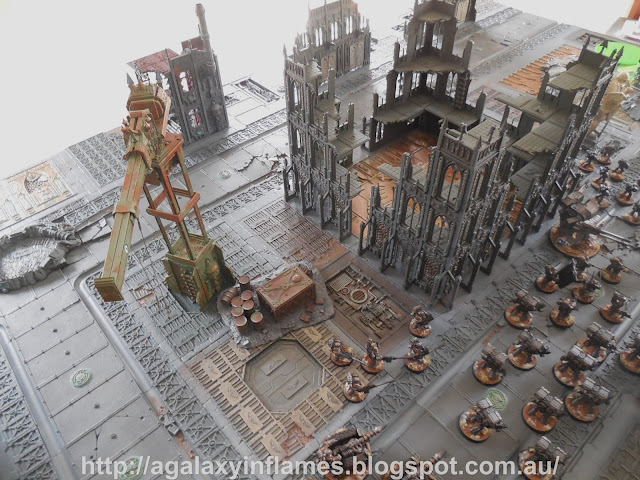 Here is the crane and fuel dump, as well as a good overview of the large (and very symmetrical)  central building.  The water plant is directly behind the crane as shown. 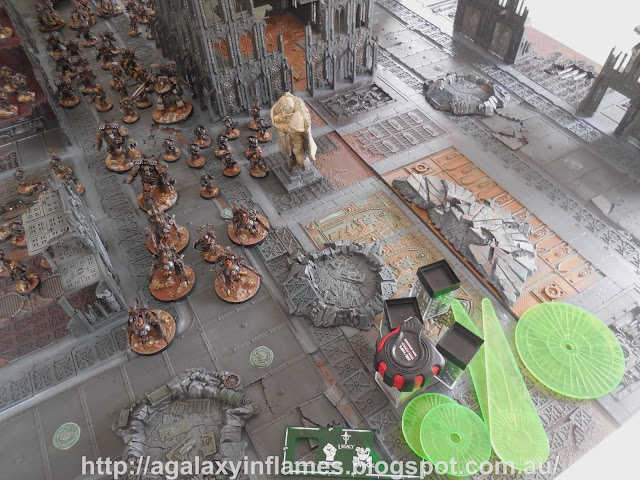 At this end, the board is relatively open for line of sight, that said however, it also has numerous objects which can be used as cover. (Not including my dice and templates of course.) 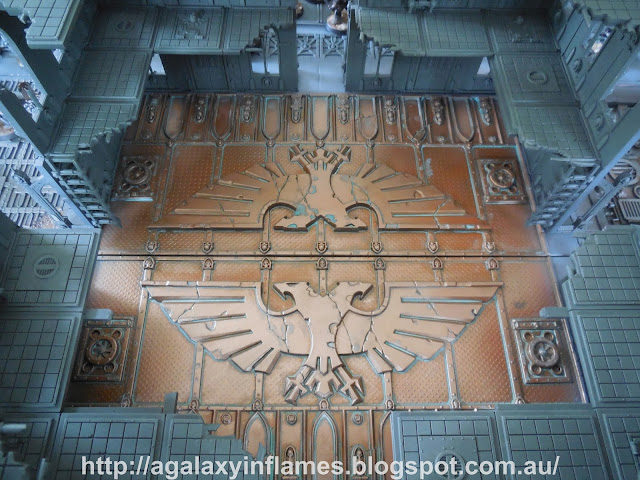 The central ruin straddles these twin aquillas. Good ol' Games Workshop, can only make something grimdark with skulls or eagles. 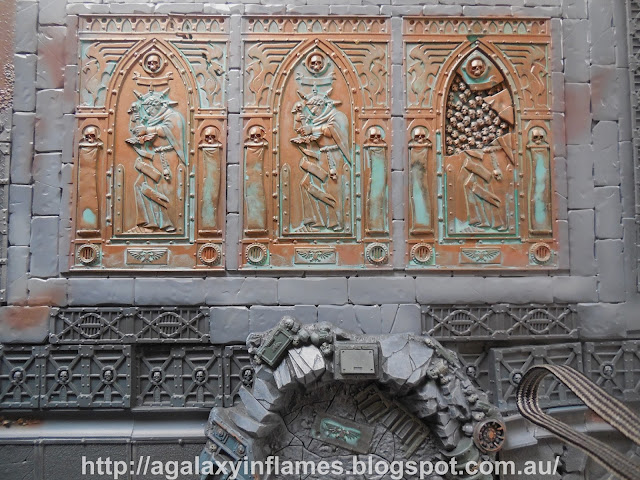 I chose to use dull brasses to create the reliefs, using some Thallax Gold from Forge World and some Copper from Minitaire, with several washes of the GW technical paint Nihilakha Oxide. I have a bunch of old bronze and brass floating around here thanks to work (no I'm not stealing it, I recondition it for those wondering) so I was able to do a fairly true-to-life weathering effect. 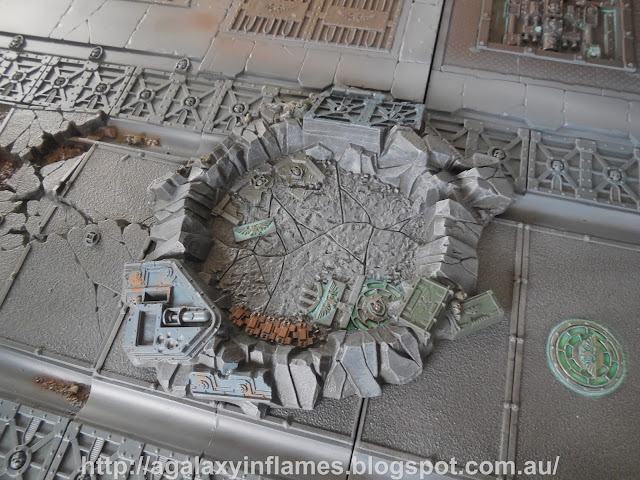 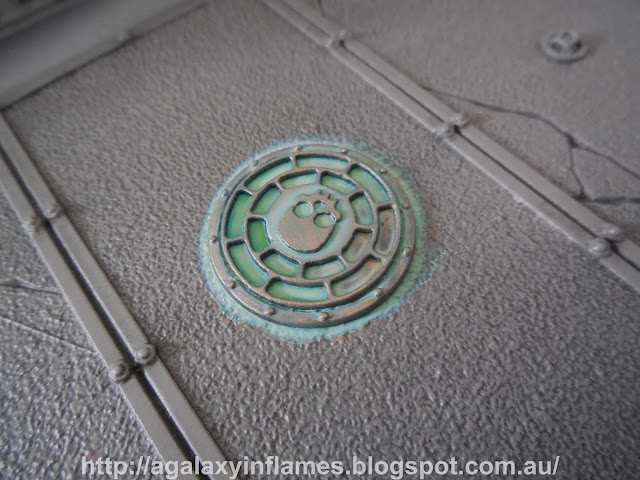 The quake craters are a very simple scheme, simply designed to suit the board. They are very subdued, and I tried to use as little colour as possible. Every manhole (personhole to any politically correct douche bags) cover is painted in a soft bronze, and heavily tarnished (these things do sit in the street corroding for years and years).

Anyway, I hope you enjoy the table, as well as my crazy ideas for it,