On Rules Lawyering and Common sense 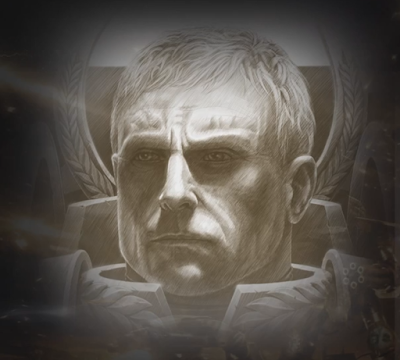 Felix here with my first post on A Galaxy in Flames (the premier location for hard hitting Heresy content).

Those of you who know me, or have read my self confident comments online will know that I have a particular penchant for getting involved in arguments on our favourite heresy pages every time a rules dispute rears its sexy head (I just can't say no to that smile).
For those of you who don't know me, or haven't read those comments, well....read above.
So, that said it's only fitting my first post on AGiF is to weigh in on a pair of rules issues making the rounds on the internet and causing undue confusion where there shouldn't be. 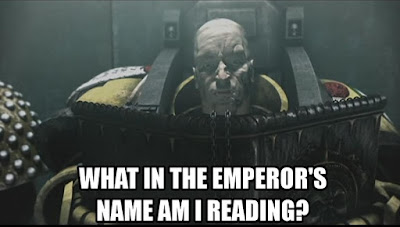 ISSUE 1:
First of all, lets discuss the elephant in the room.
The "hot topic" of rules issues at the moment seems to be in regards to the newest kid on the block, Mr. Roboute Guilliman and his snazzy getup "The Armour of Reason".

To catch you up, his armour gives him a 2+ save and a modest 4++ invo, pretty normal for a primarch to be honest. The issue however seems to arise due to the extra tidbit, in that his armour allows Guilliman to re-roll his first failed invo in any particular phase.

If you don't see anything to get confused about, don't fret, neither did I. When I saw this being argued online I was a little disappointed in the rules-lawyering to be perfectly frank, though for the sake of brevity I will explain both sides of the argument before giving my conclusion.
It appears that the entire argument stems over the use of the word "Particular" when talking about phases, causing two lines of thought which are thus:

Now, my personal take was the latter, and when confronted by the former argument, my initial thought was that the interpretation was, straight up, too complicated and otherwise specific, without giving an example or bracketed explaination to say it was so.
I would imagine if that was the intention, they'd specifically draw it out in black and white to say so.

Before I got involved in this one however, I did perhaps the wisest thing I could, I simply emailed forgeworld about it and, to my surprise, they responded within a few hours (with a new customer service survey to boot, looks like they're trying to speed this stuff up).
The response was succinct and flat said that the second interpretation was indeed correct. Huzzah!

VERDICT: Guilliman can re-roll his first failed invulnerable save every phase and may do so in following phases all game.

ISSUE 2:
This issue is a little more in the realms of RaW and RaI. We're talking about the debate over whether dedicated transports, when taken for a unit that is scoring become scoring themselves.
Sadly, I have no direct answer from FW from this one, so take my final verdict however you want, but this time I'm going to discuss wording and logic paths.

So firstly, lets break the wording on scoring units down.
We have the statement:

"Unless specified in a particular mission [...] only units taken from the troops choices and those specifically noted in their entries (aka implacable advance) [...] are counted as scoring units."
(bracketed comment added by me)

Simple enough so far. This means that only those units *taken* as troops and those with the implacable advance (or similar) rule are considered scoring units. Cool!
Now, here's where we hit the road bump, in brackets (I omitted it above for dramatic writing) right before saying "are counted as scoring units" the  rule states "(other than dedicated transports)".

So again for clarity the rule states:

"Unless specified in a particular mission [...] only units taken from the troops choices and those specifically noted in their entries (other than dedicated transports) are counted as scoring units"

I can see several possible interpretations of the rule with the structure and wording however, the most popular says that the bracketed section applies only to the "requires special rule" section of the rule, implying that troops are scoring of course, but only units with special rules and ALSO dedicated transports are also scoring (being excepted from needing a special rule to be so).

My issue with this interpretation is that even taking it that way, it instantly implies that ALL DT's are then scoring, not just those taken for troops choices, which is the common argument. I think it's pretty clear cut to say that FW don't intend for *every* vehicle taken as a transport to be scoring regardless of what FoC it fits into.

Now the way I interpret this rule is that the bracketed exception applies to the whole statement, so while yes, troops are scoring and special rules give scoring, DT's are *never* scoring, even if they somehow ended up with a special rule saying they could (which was in no way possible until Guilliman, who can give any unit type implacable advance).
This seems more appropriate to me, since they obviously weren't trying to rule out Gmans rulebeing that he wasn't even concepted at the time but were instead trying to make it clear that DT's don't score, even when taken as part of a unit that is either troops, or has implacable advance while also being a nice bit of future proofing anyway to prevent cheese from Guilliman-esque scoring rhino spam or something.

If it were the former interpretation, I certainly imagine FW would have included an example to make it clear that was the case, my precedent being 6th ED 40k in which rules specifically called out vehicles hitting certain FoC due to being transports, that could then become scoring in certain missions (A devastator team's transport becoming scoring in Big guns never tire ect).

VERDICT: DT's are never scoring, even if they end up with implacable advance.

As I said above though, this isn't from the horses mouth, just my take on the situation. To me the rule is either implying that ALL or NONE of dedicated transports are scoring, with NONE being the most sound explanation.
Sound off below with your own takes if you want, but hopefully my logic is solid and it's made sense to you.

If you agree with me (or don't) and end up playing with that stubborn asshat who refuses to agree, let the dice decide, and don't get hung up on the result, enjoy the game regardless, that's what we're here for!
I think I'll make that the topic of the next post come to think of it...so stayed tuned for "On Gaming Etiquette and after game gripes"

Cheers,
Felix
Posted by InquisitorFelix at 15:40