Hey hobbyists, hope you're well! Today we are doing Urban Streets. The stock bases and most of the parts I am going to 'do them up with' are all Secret Weapon Miniatures parts. Their stuff is great, that's why I use it, however other people make similar products, for example Forge World does etch brass barbed wire and weathering pigments. Keep an open mind and find the materials which suit the job you're after.

I would also like to point out that, keeping in line with the previous basing tutorials, we are all about simplicity here. Even where I use a technique that's not well known to a basic painter, I will provide plenty of pictures an commentary on what I have done, as my aim is to help even the newest of people to get some great bases done.

Now onto the base. To start with, I have some secret weapon shell casings, and etch brass barbed wire. I also have some florists wire from my local hobby shop. 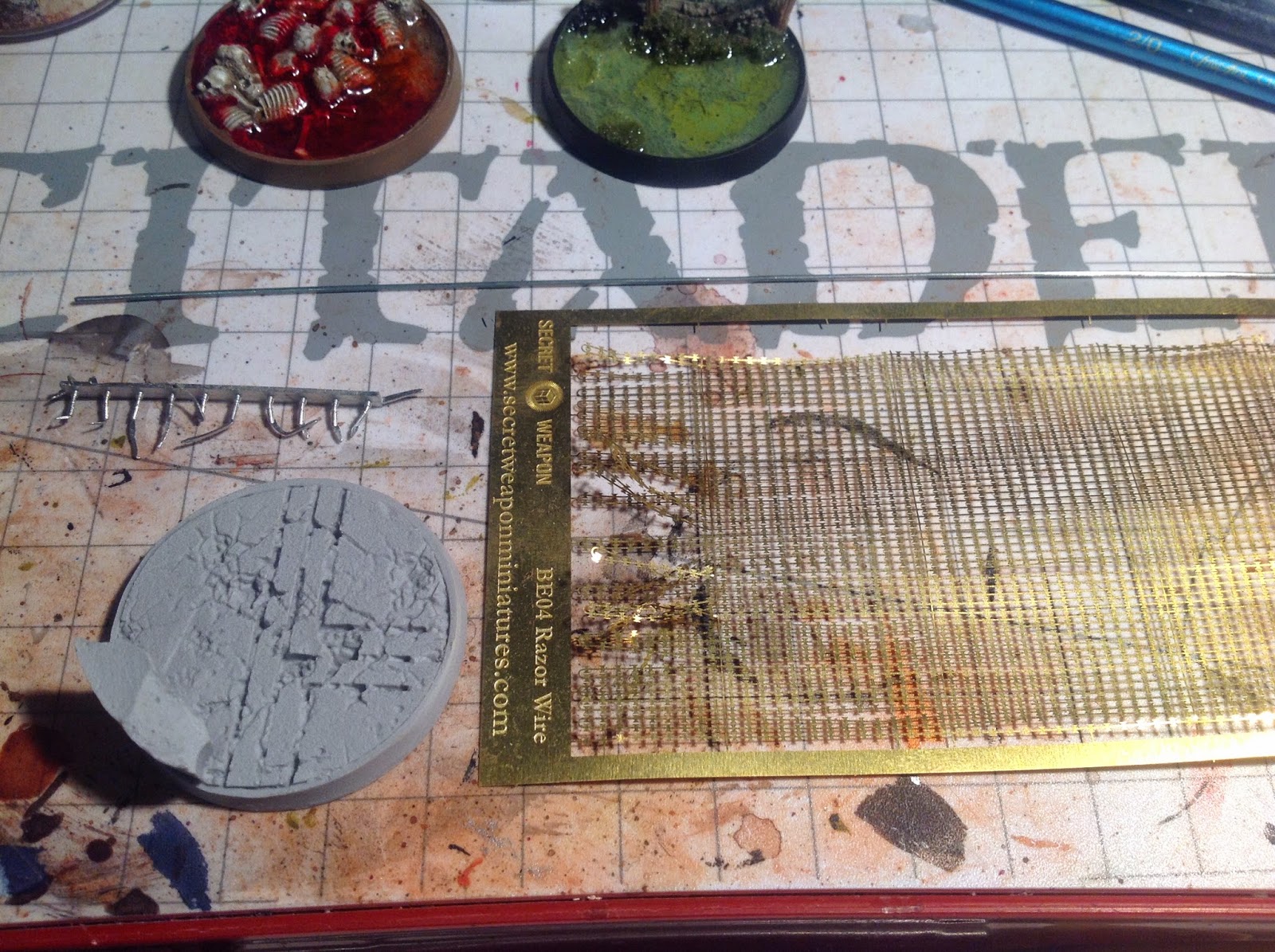 I cut and cleaned half a dozen shell casings, and glued them in a random pattern in one part of the base. From there, I grabbed the florists wire, and twisted it into a loop, before trimming it. I did this twice in order to get a pair of '9's. 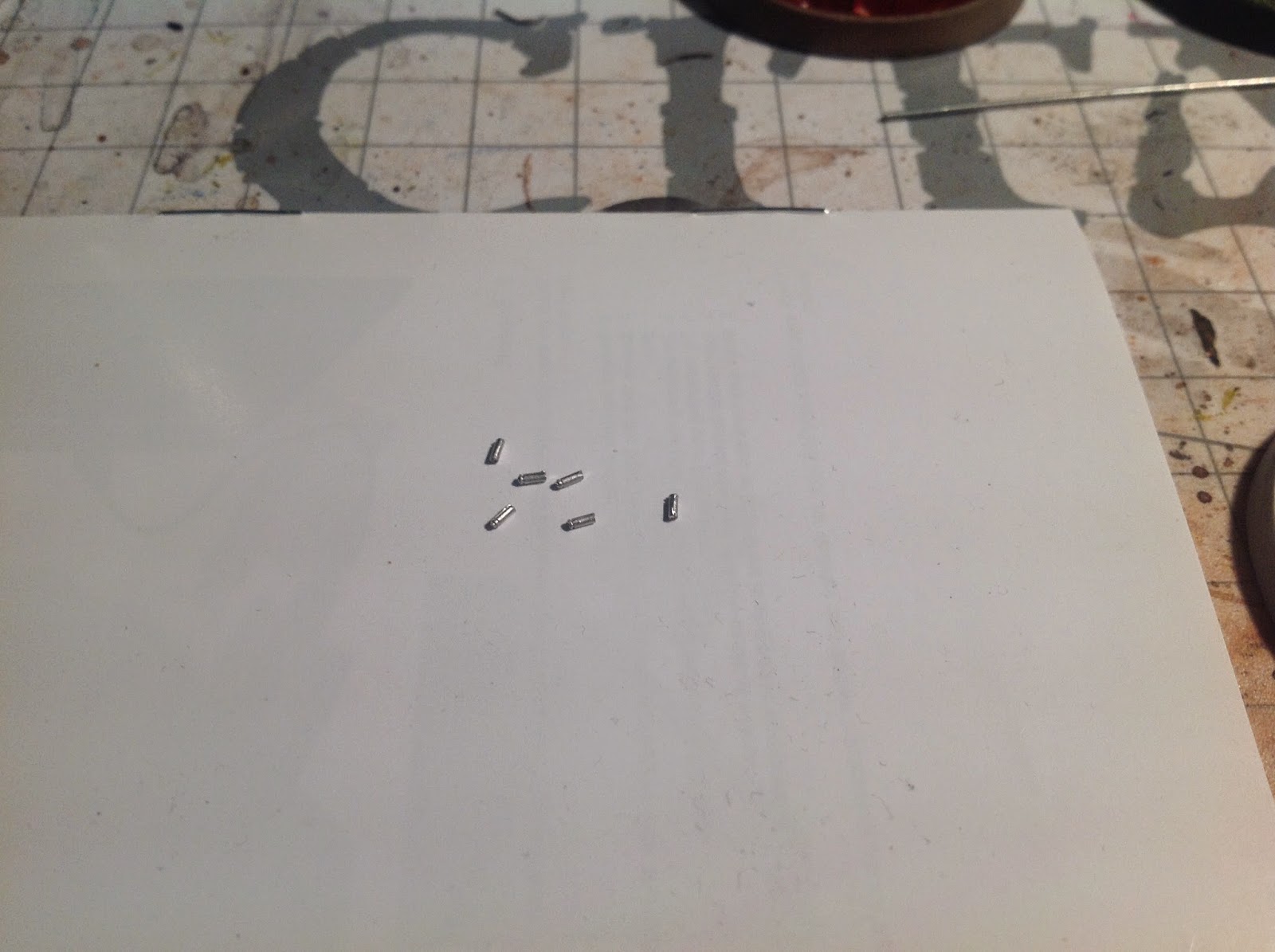 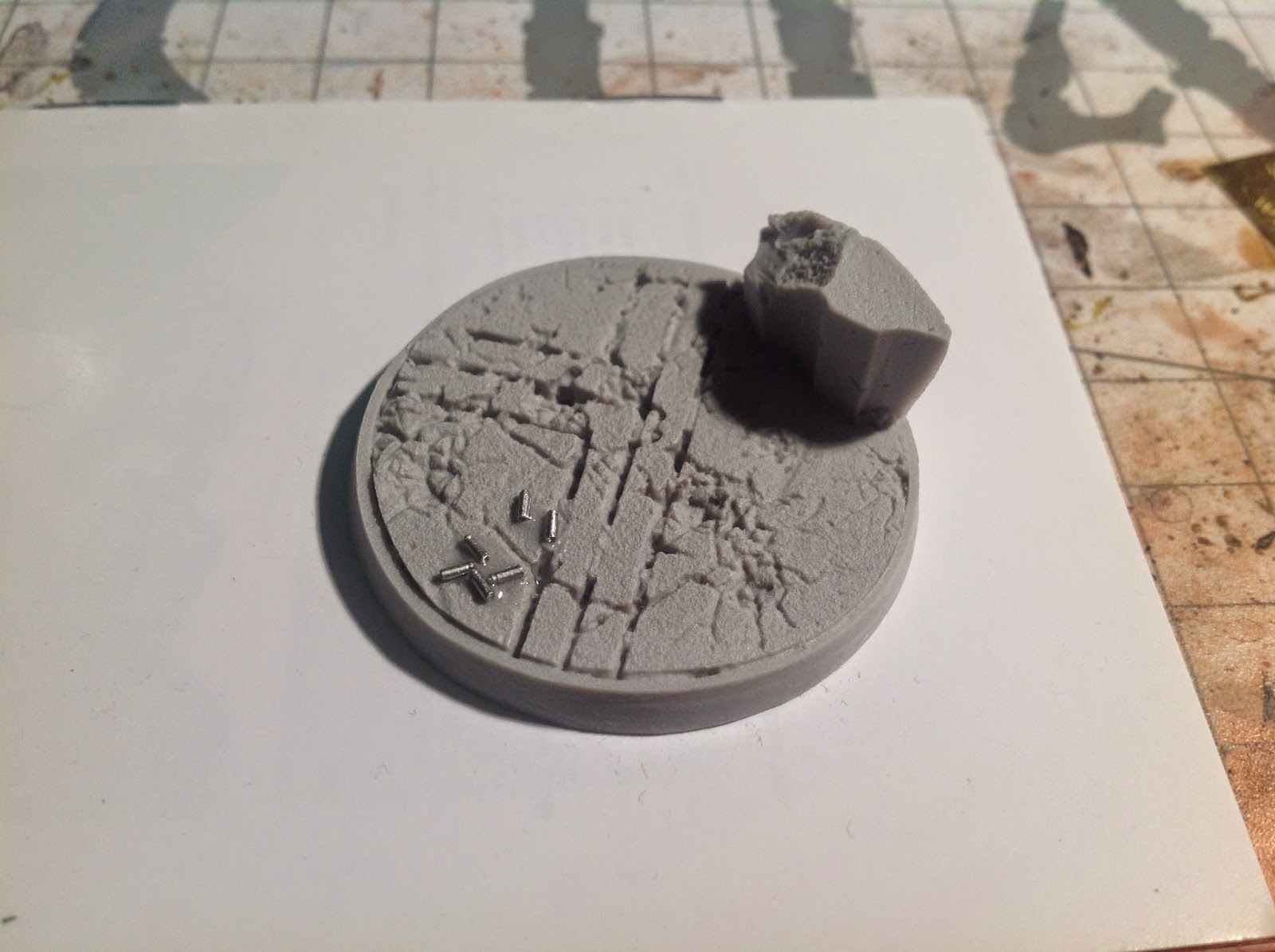 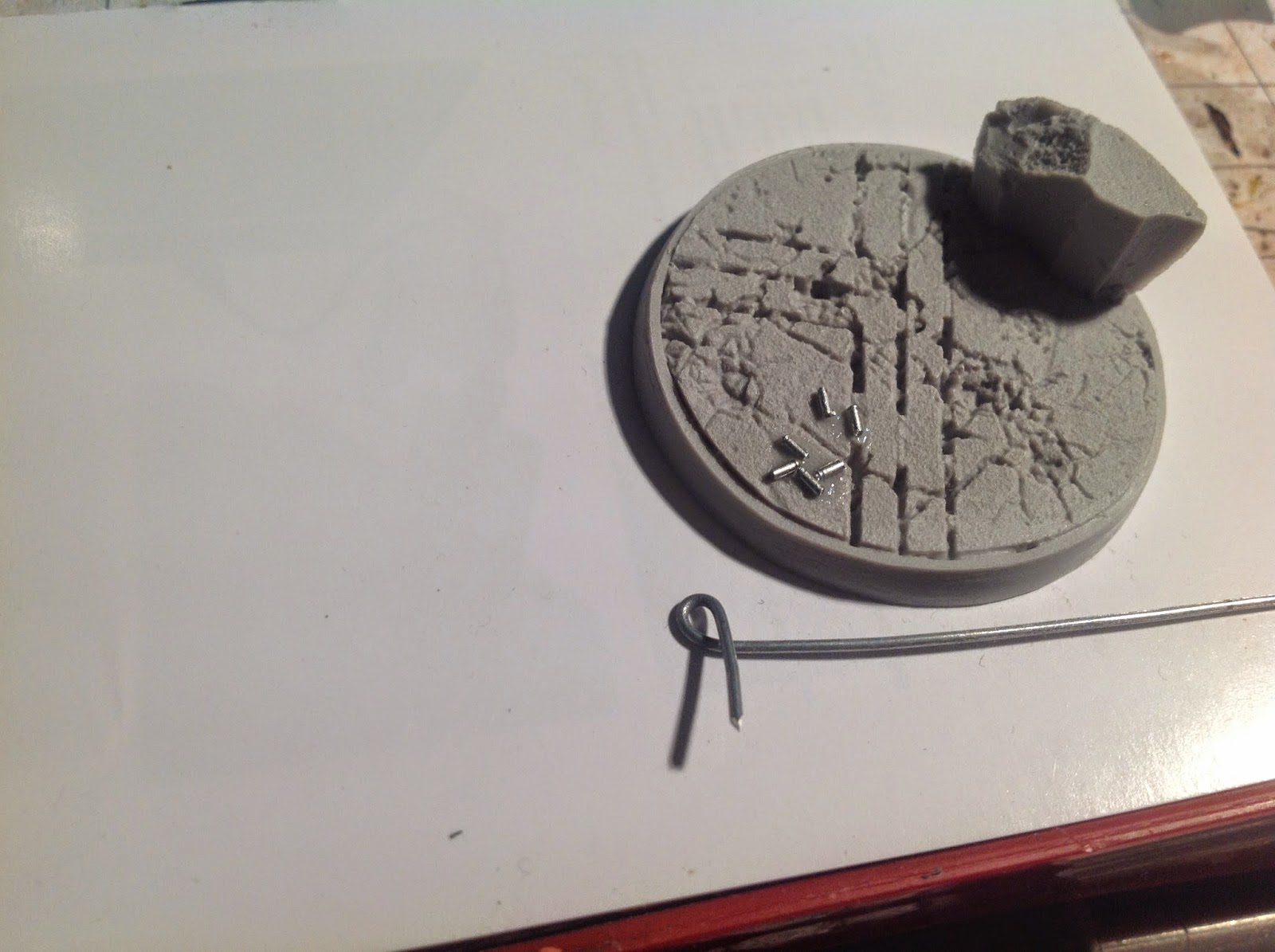 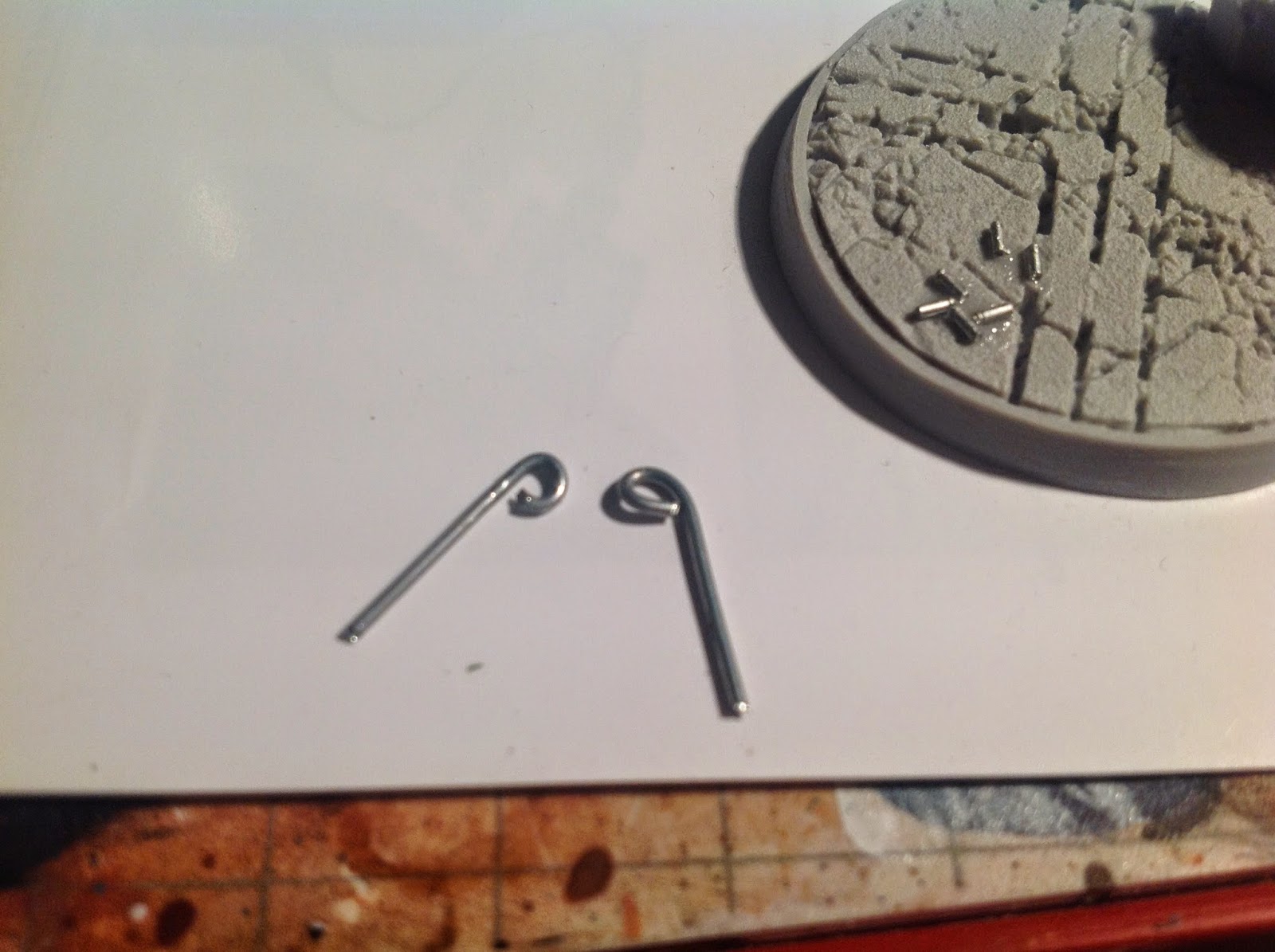 I drilled two small holes into the base and glued the 9's into the base. These are the pickets for my barbed wire to go into. Next, I twisted the wire around a clear tube in order to get a rough coil, before gluing it into place. 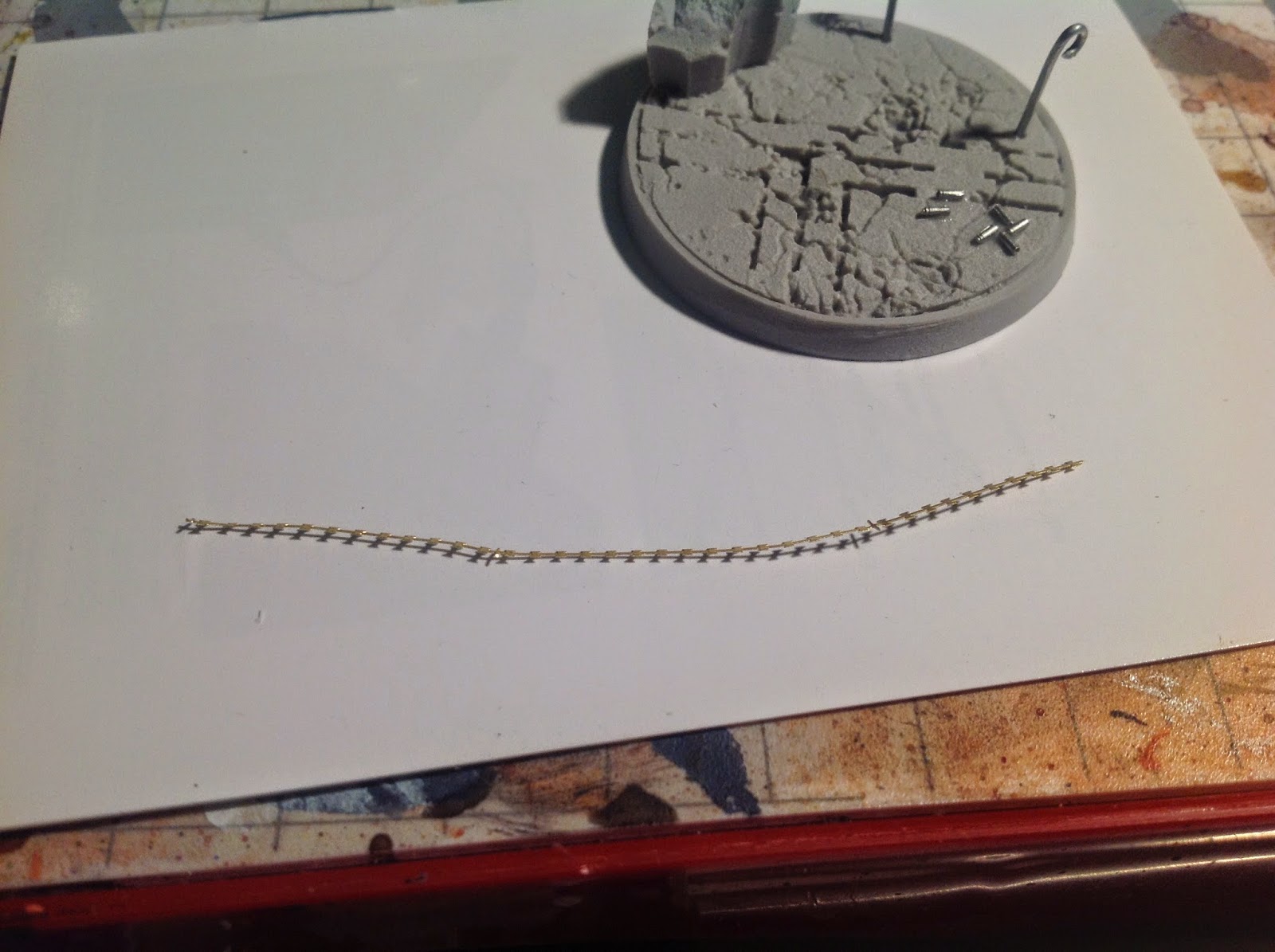 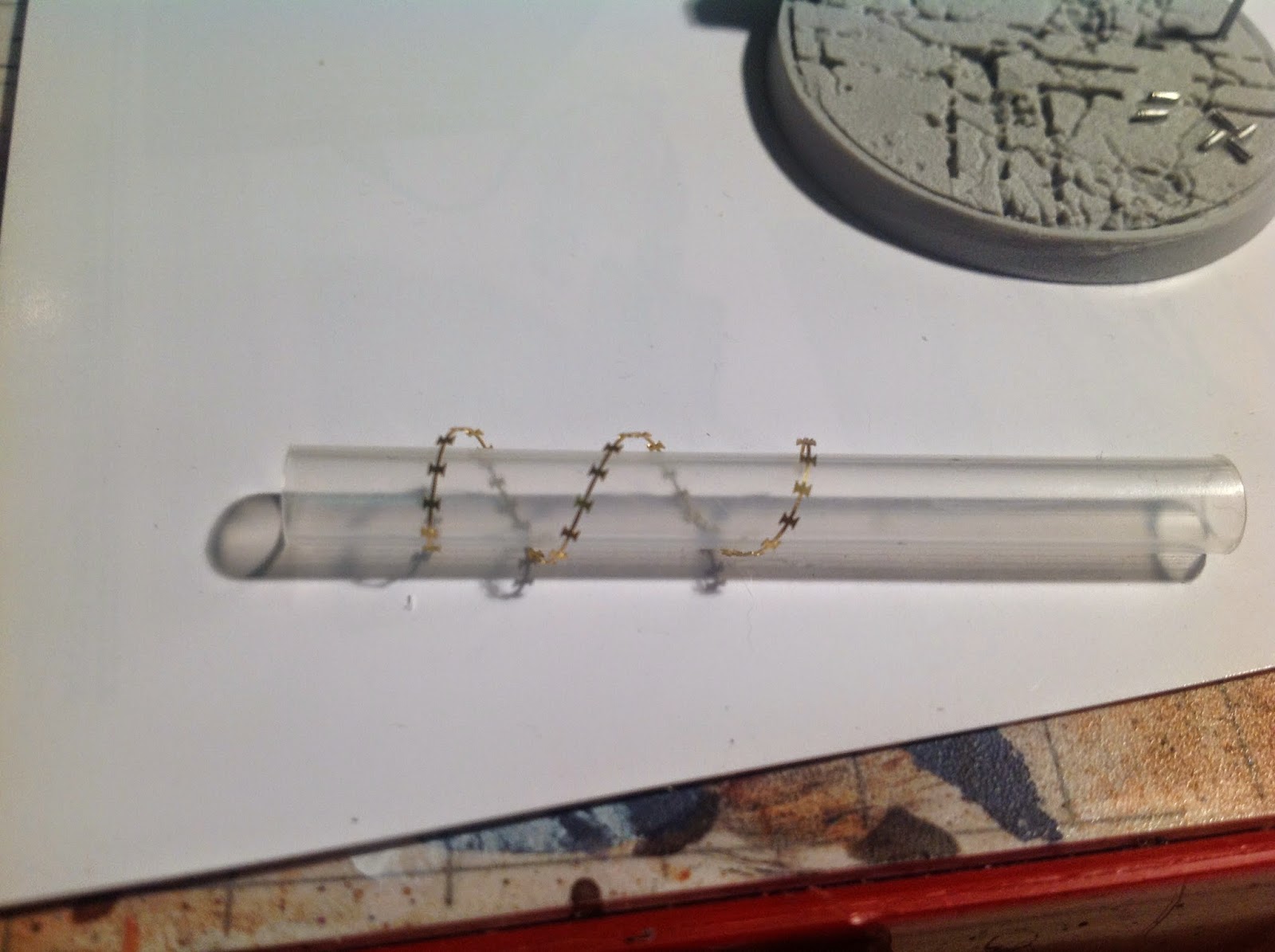 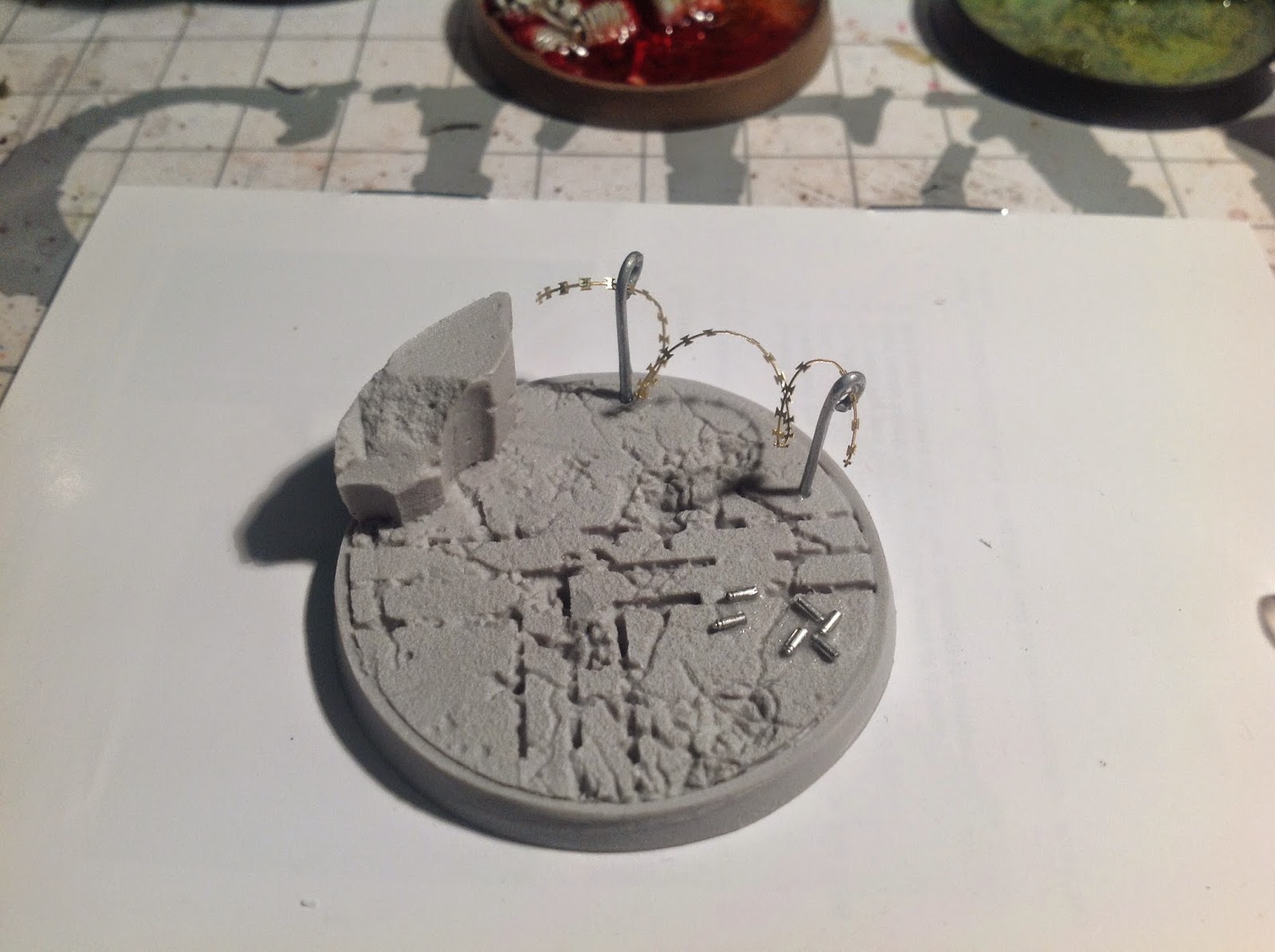 Next, I applied a little grit around the base to help tie in some of the elements, namely the concrete bollard and the two pickets. 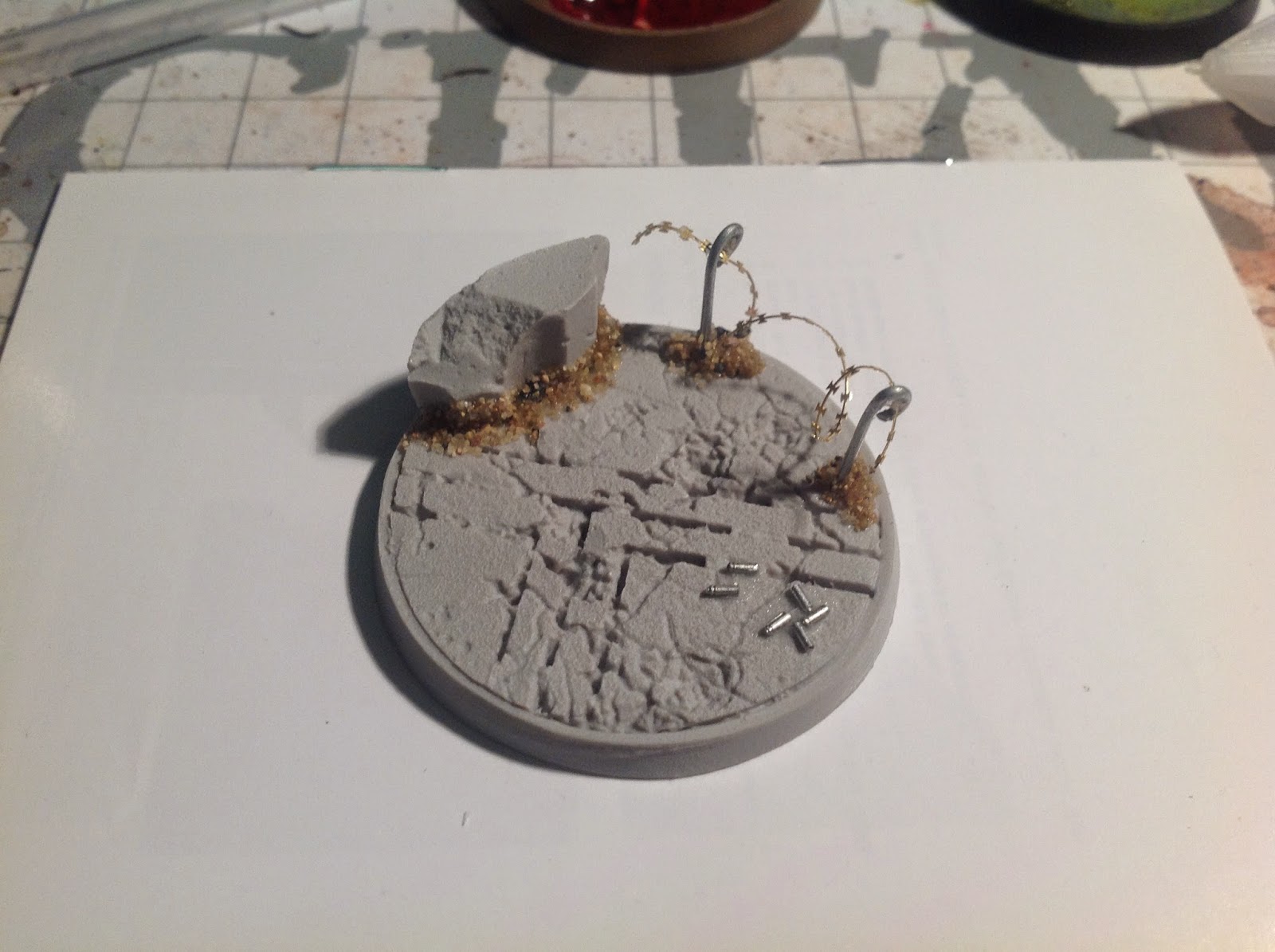 I undercoated with a regular black spray, before hand painting some Tamiya XF-24 Dark Grey on. I love this colour (shade~ for 'that guy' who will tell me otherwise). From here I did a rough drybrush of Russ Grey to help define my textures, and added some wolf grey in order to do the bollard. 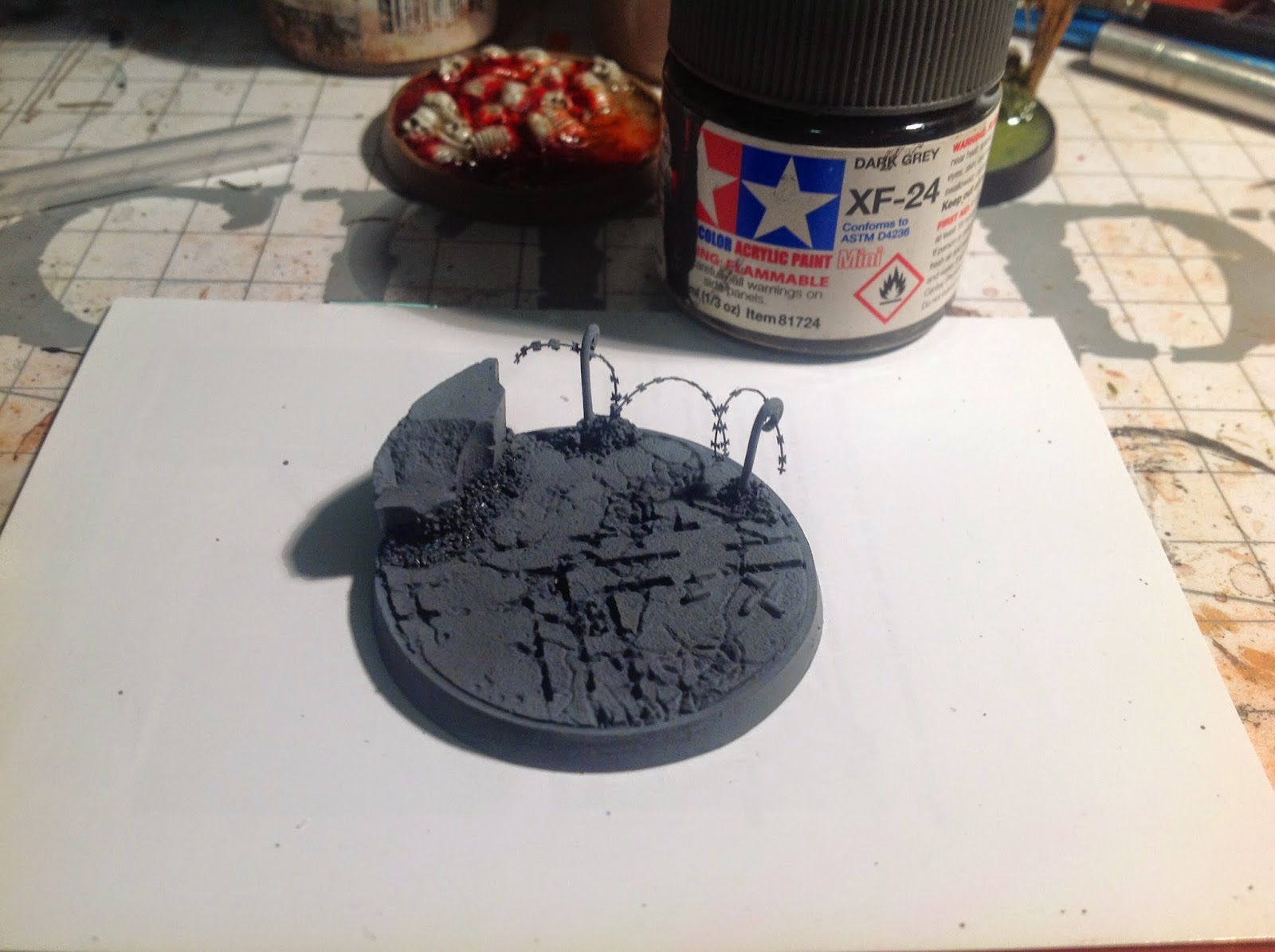 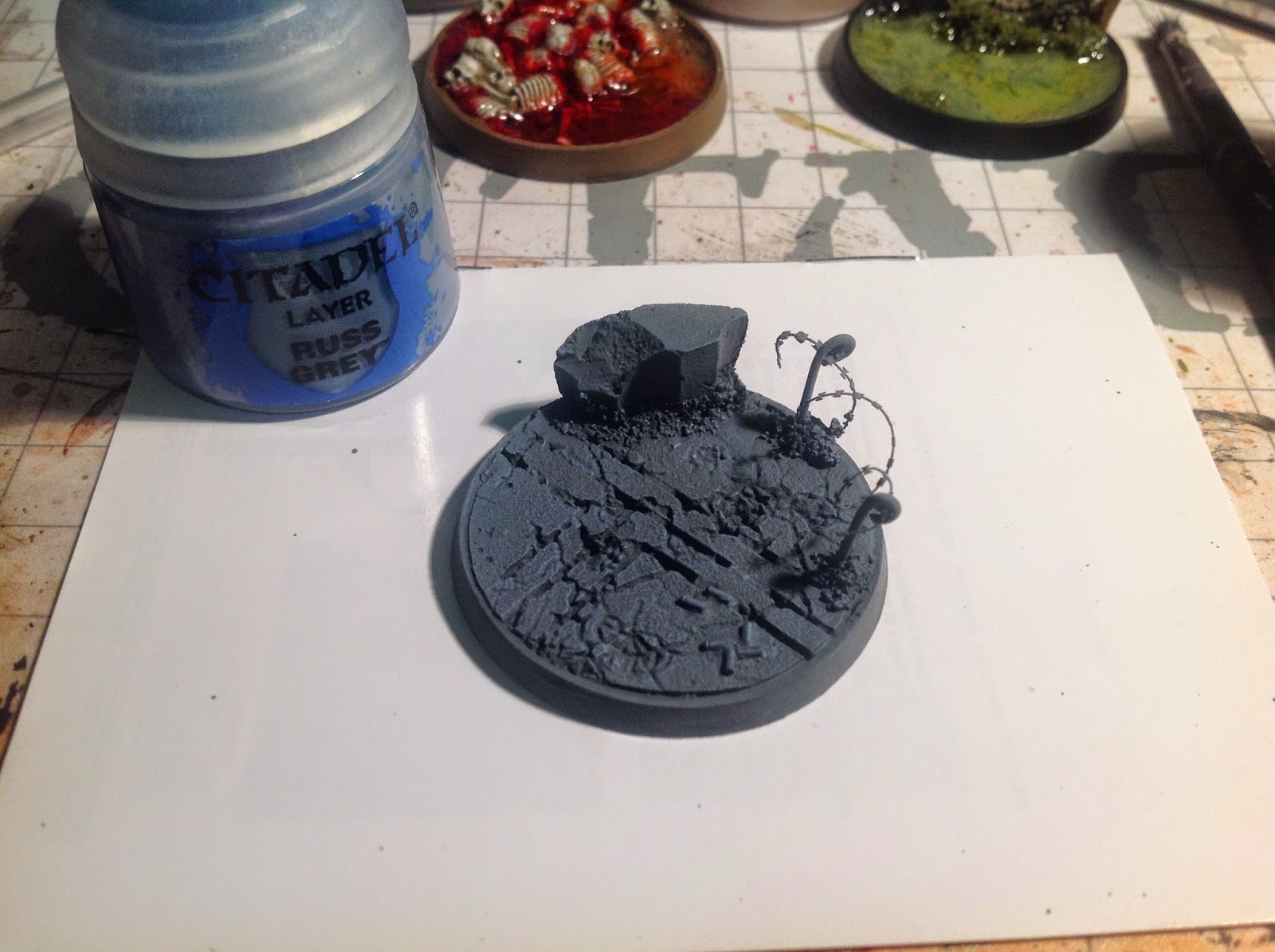 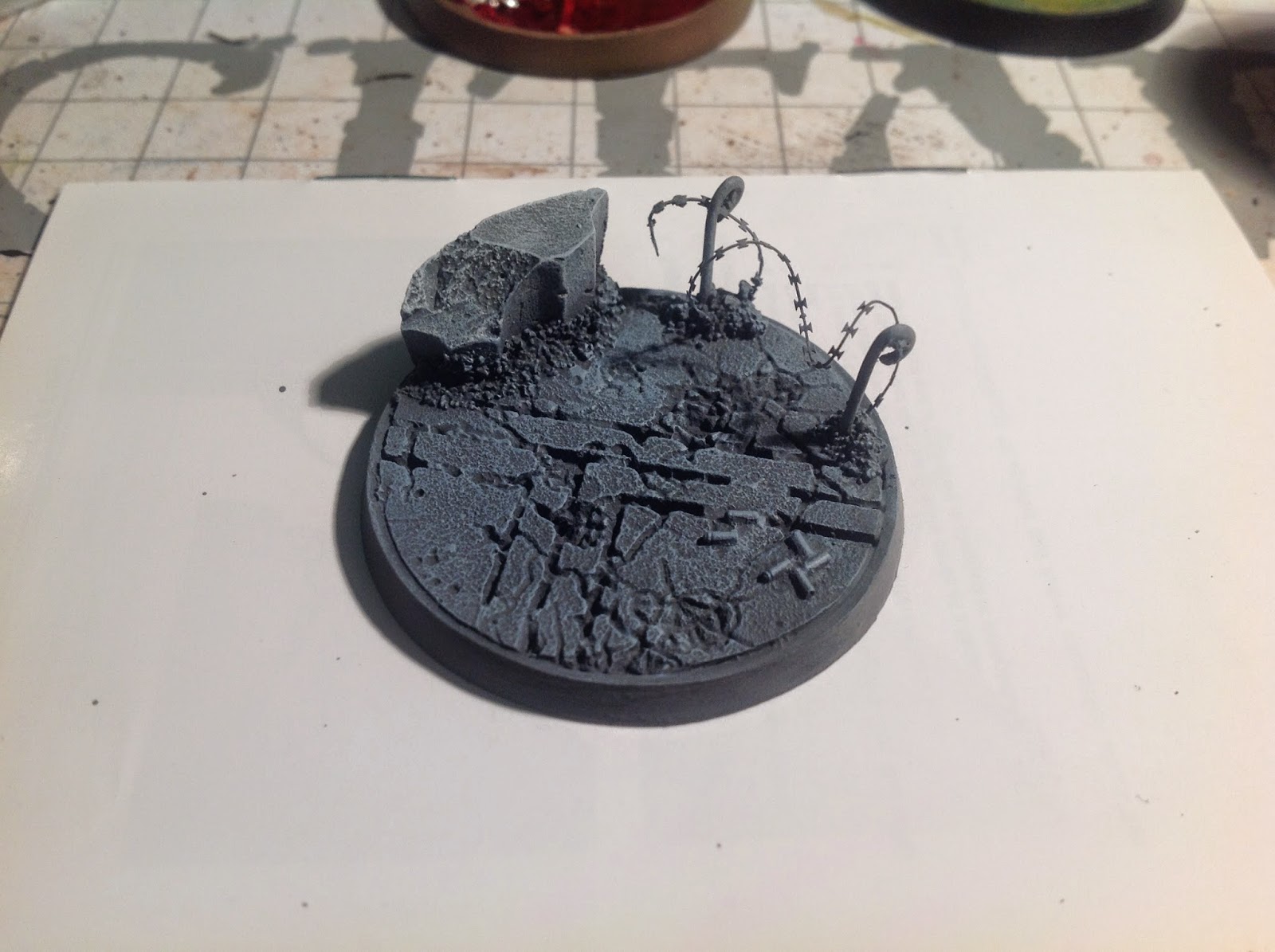 Next up were pigments and metallics. Simple GW Leadbelcher foundation was used on the pickets and wire, and GW Auric Armour Gold for the casings. For the pigments, I applied a little 'Rust Orange' and 'Dark Earth' from Secret Weapon, before using some GW Agrax Earthshade to spread the pigments, and adding water to dilute it. I then added more pigment as required in order to get just the right tones. I also sponged a mix of Blazing Orange paint and Rust Orange pigment onto the wire. 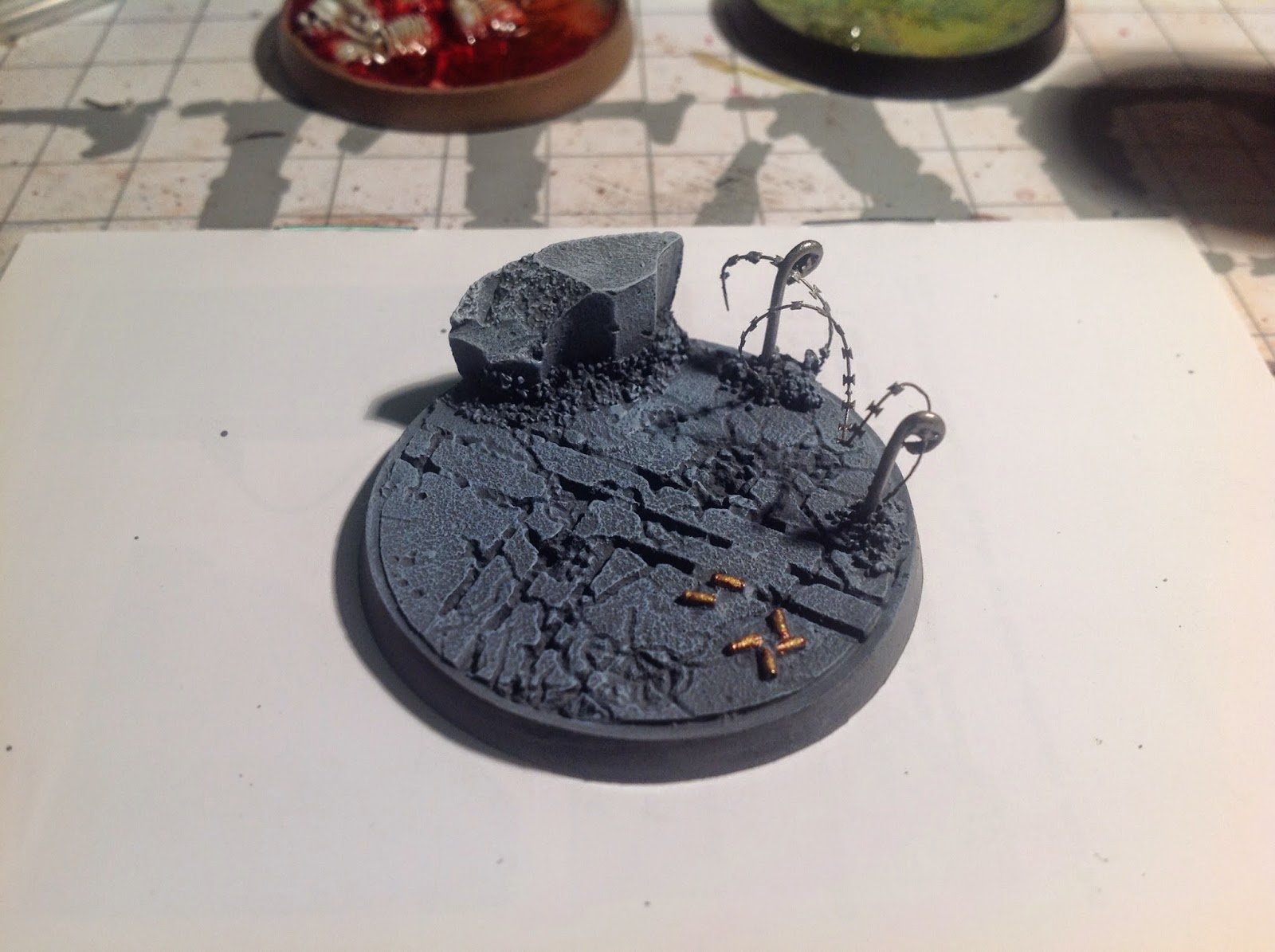 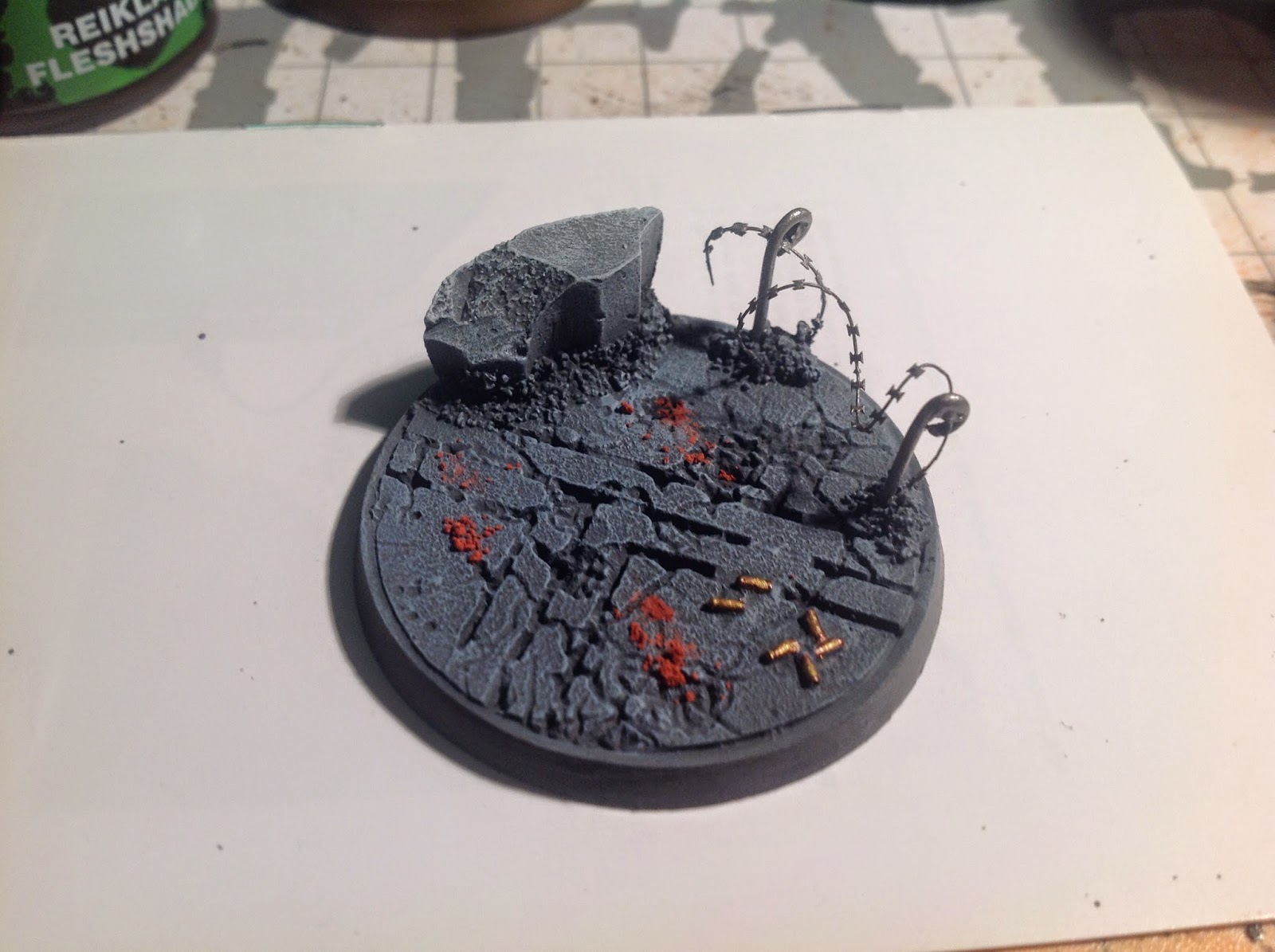 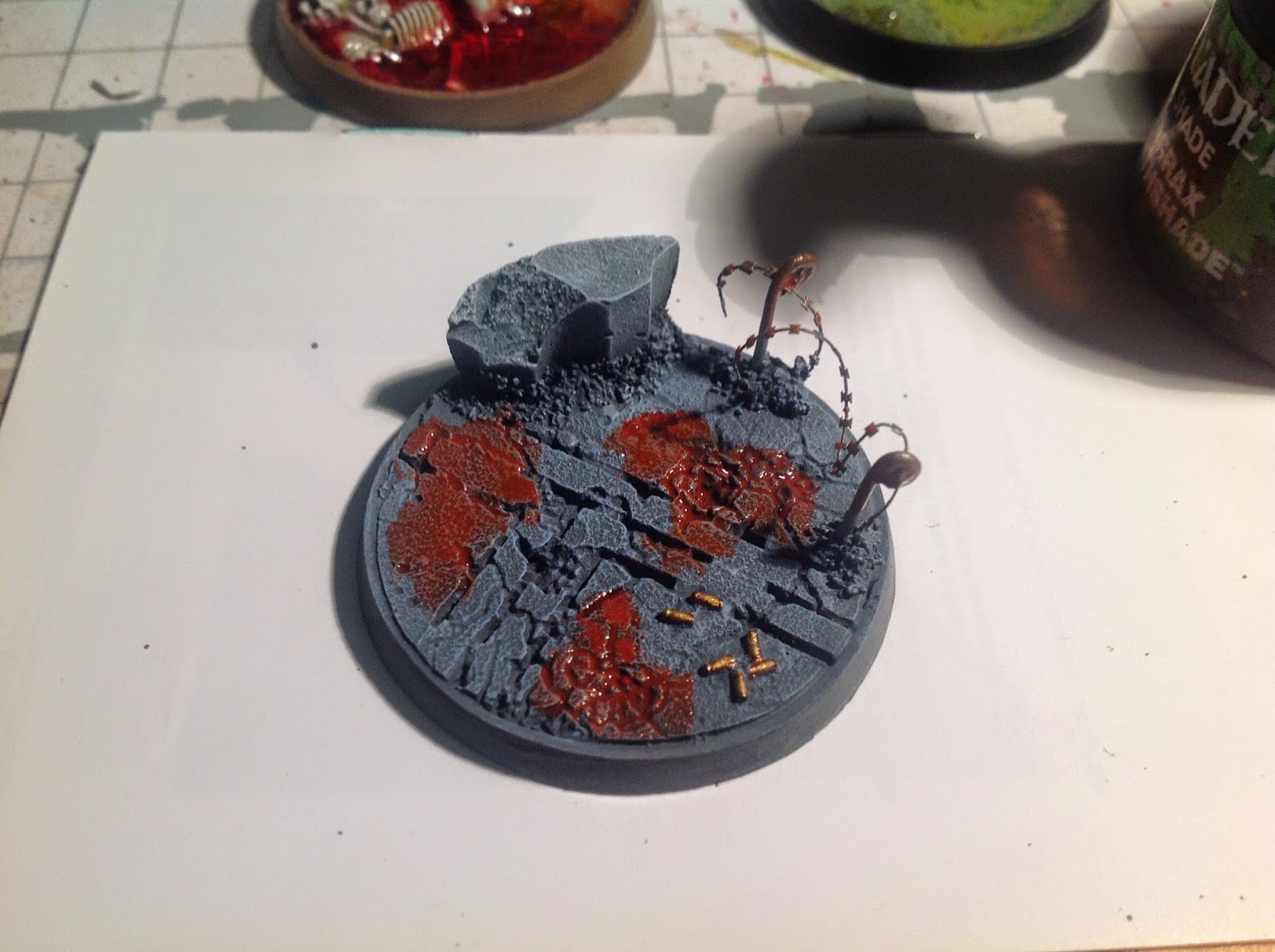 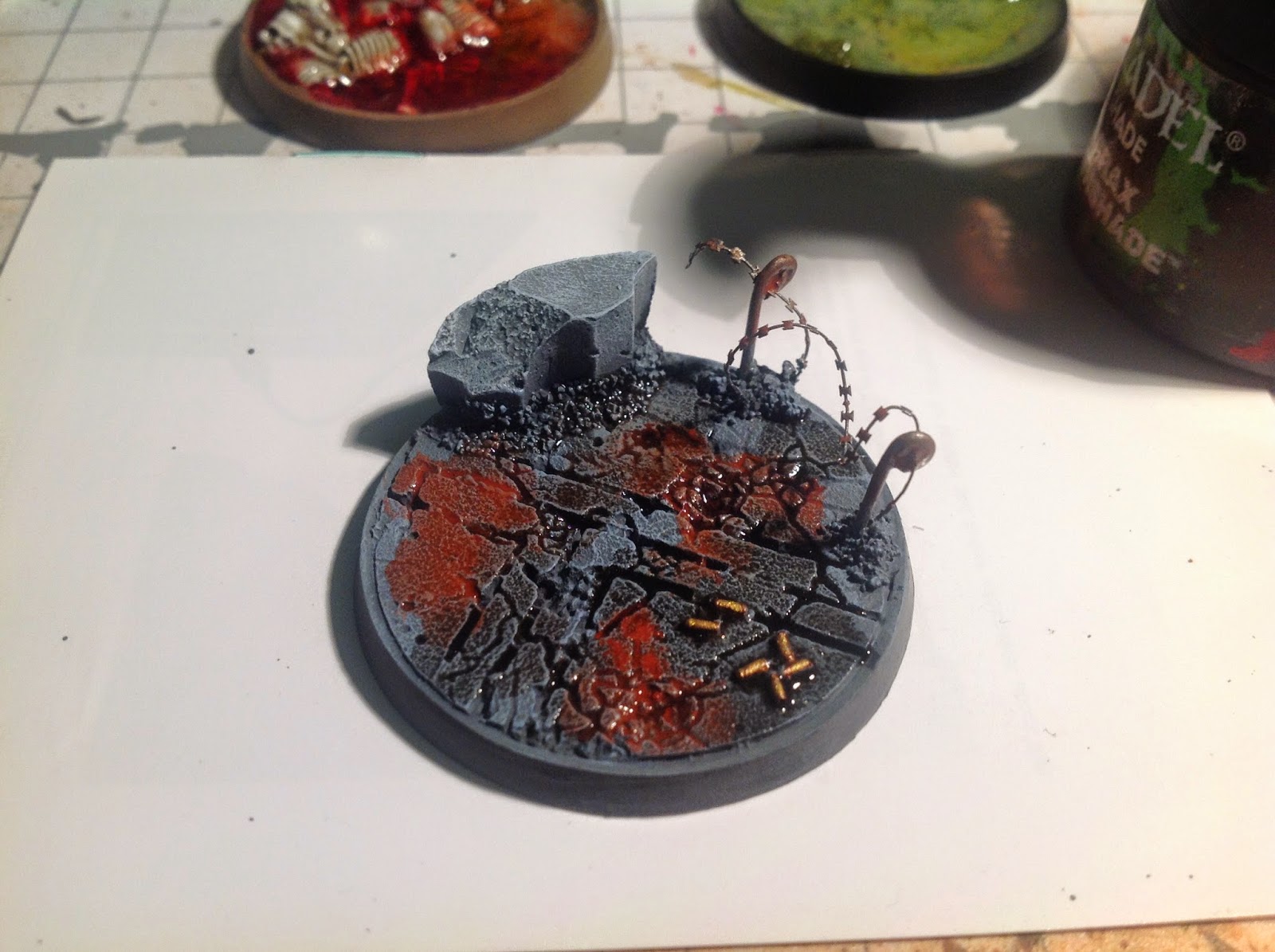 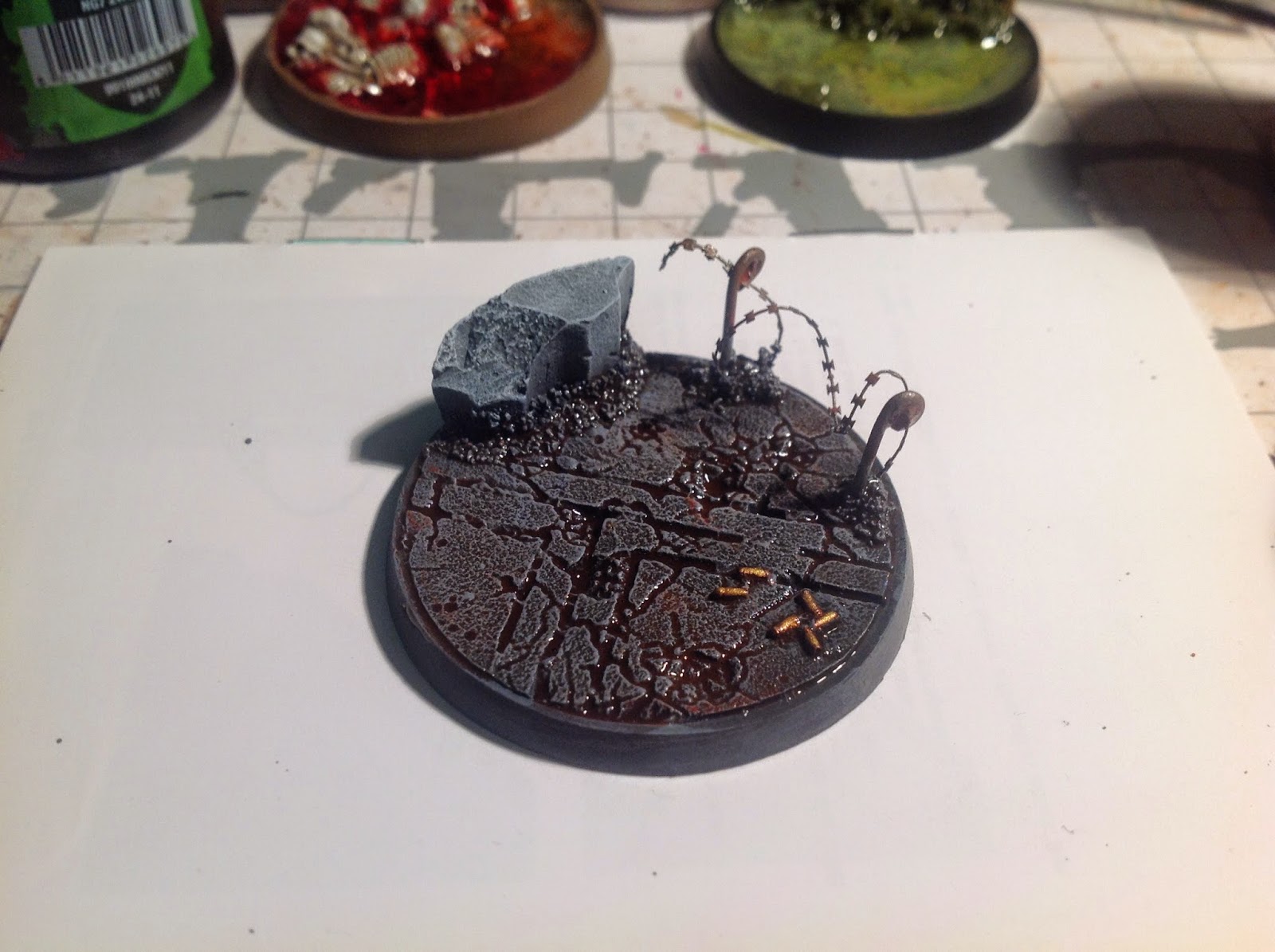 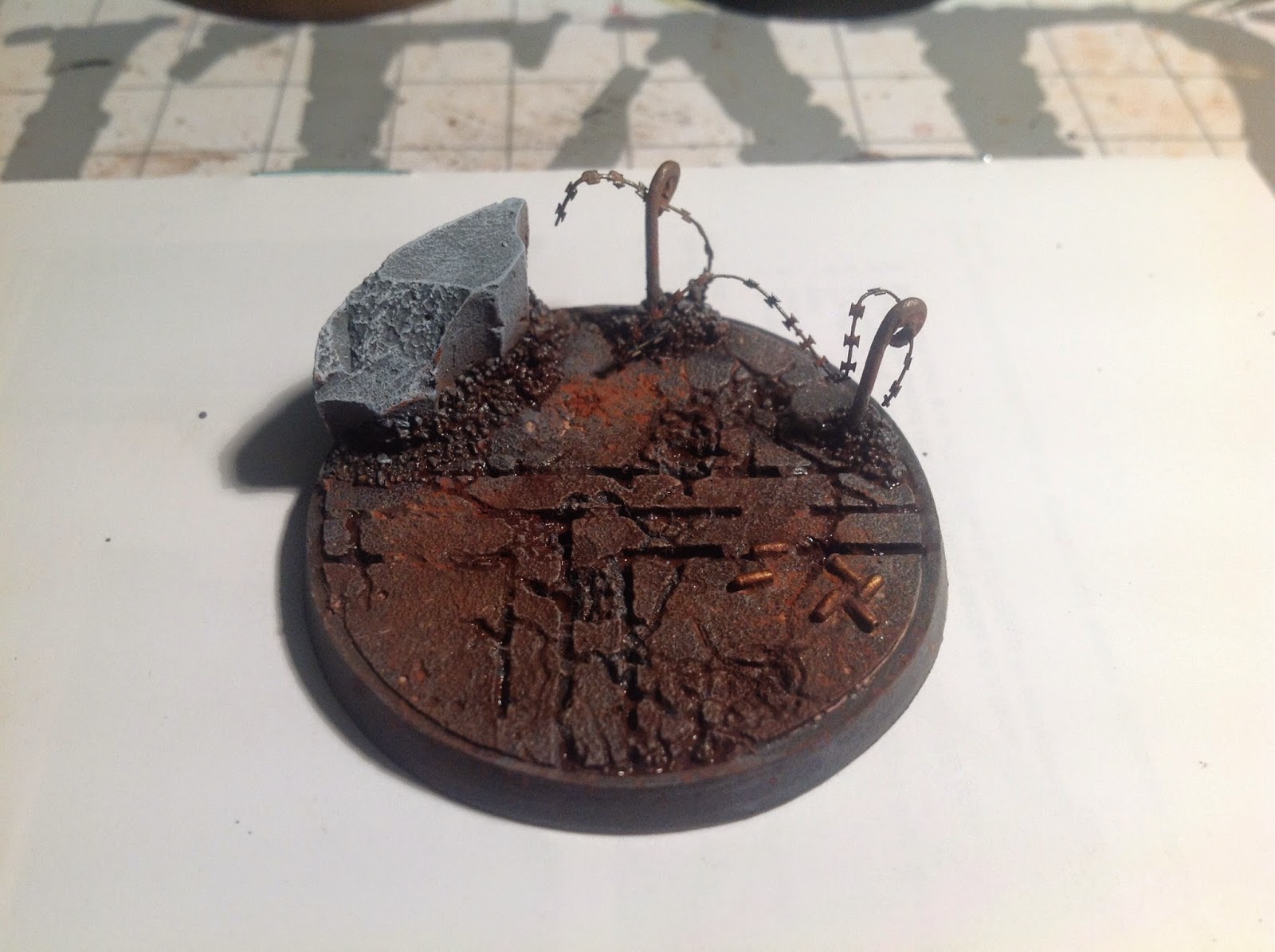 Once I was happy with the tones, I simply brushed over the base with more Russ Grey and painted the edge of the base in Chaos Black. 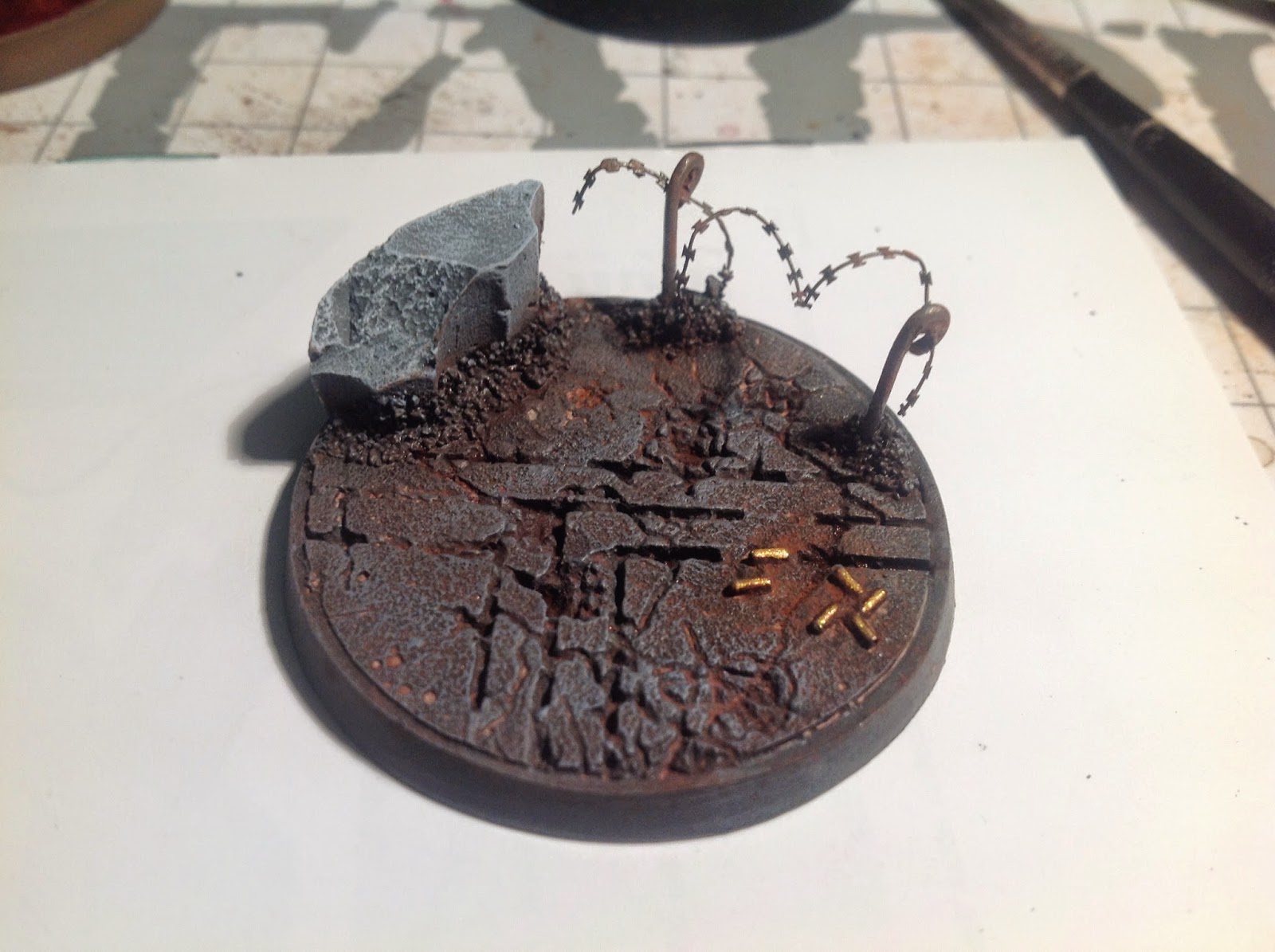 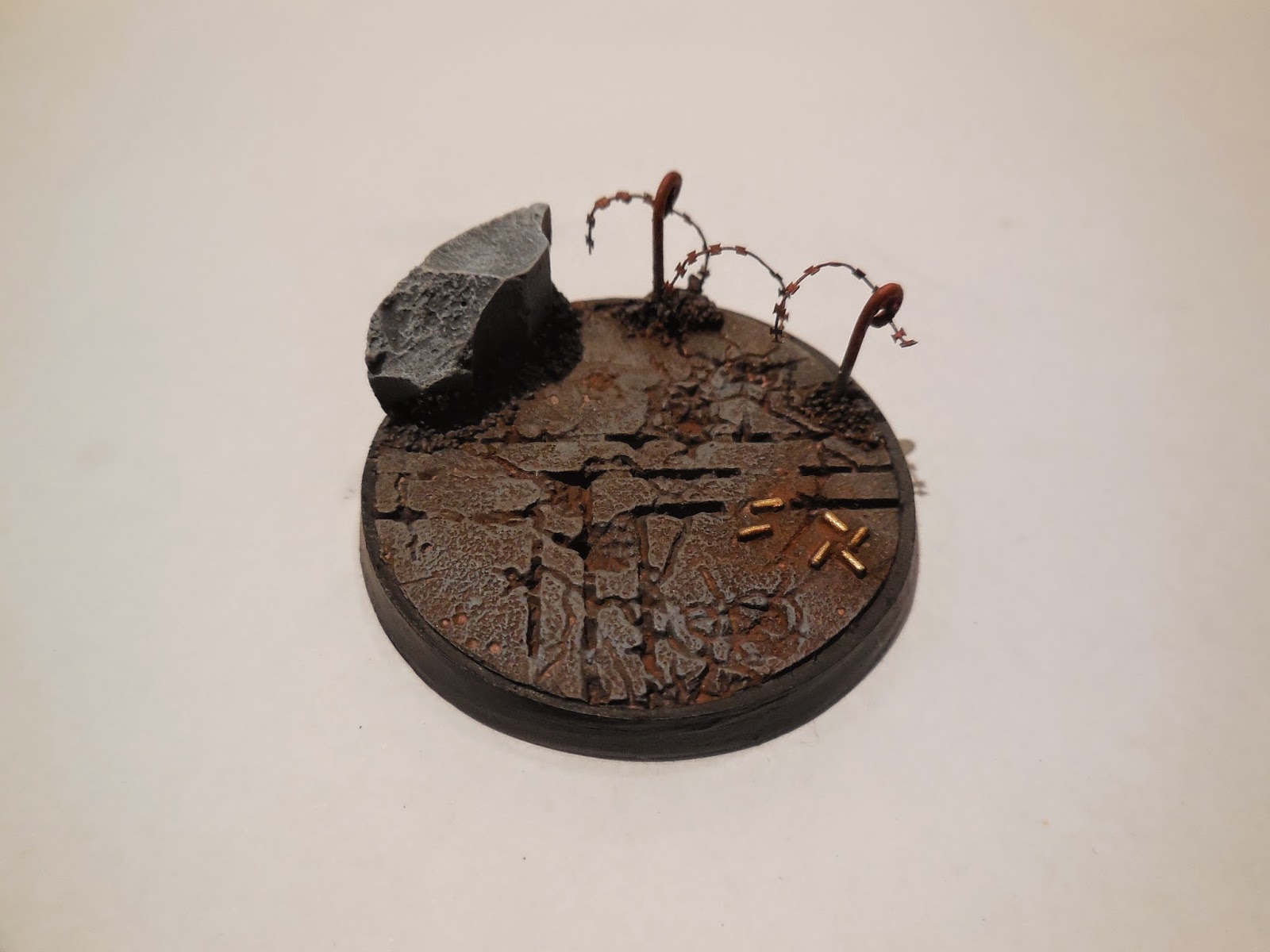 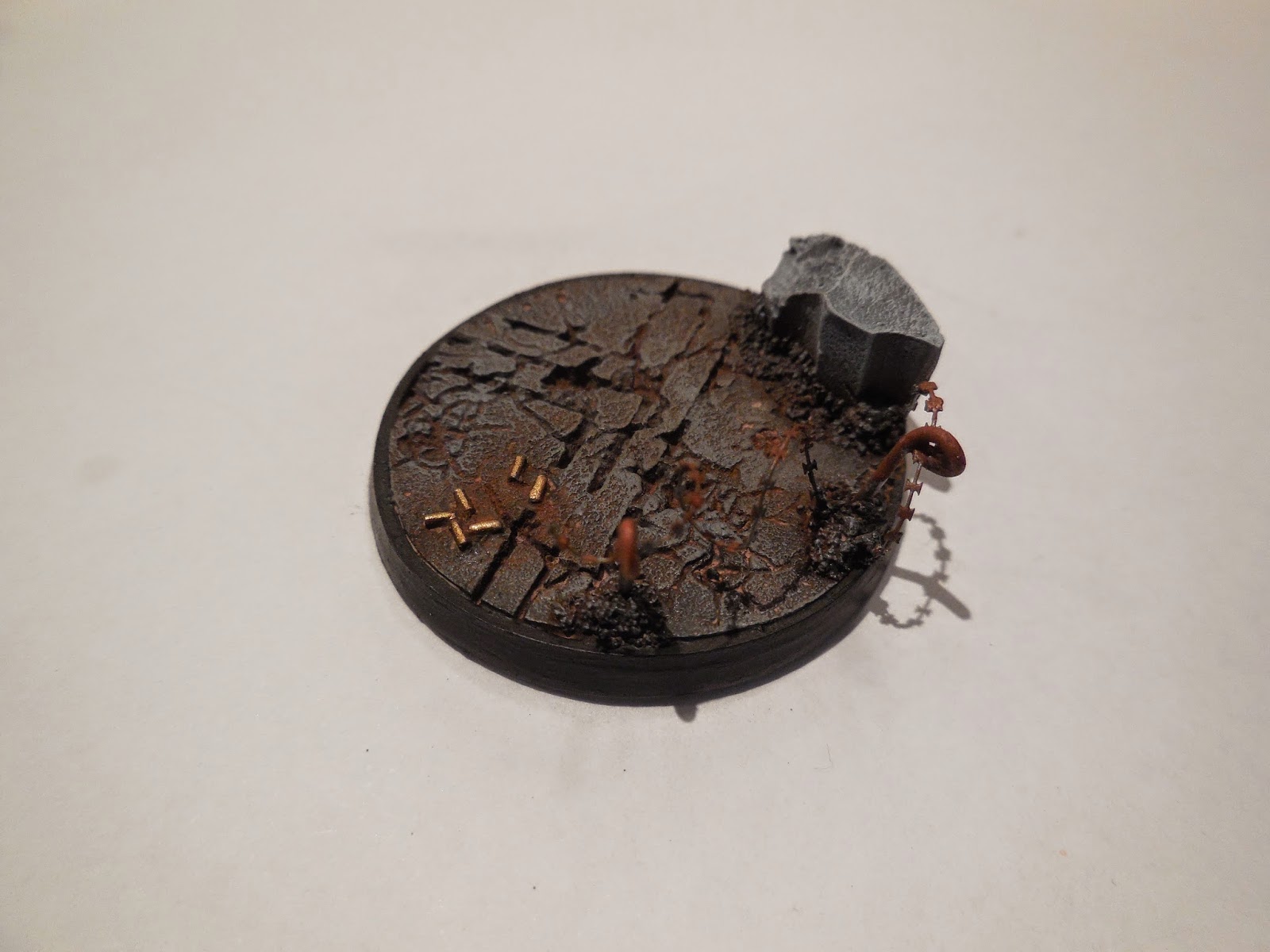 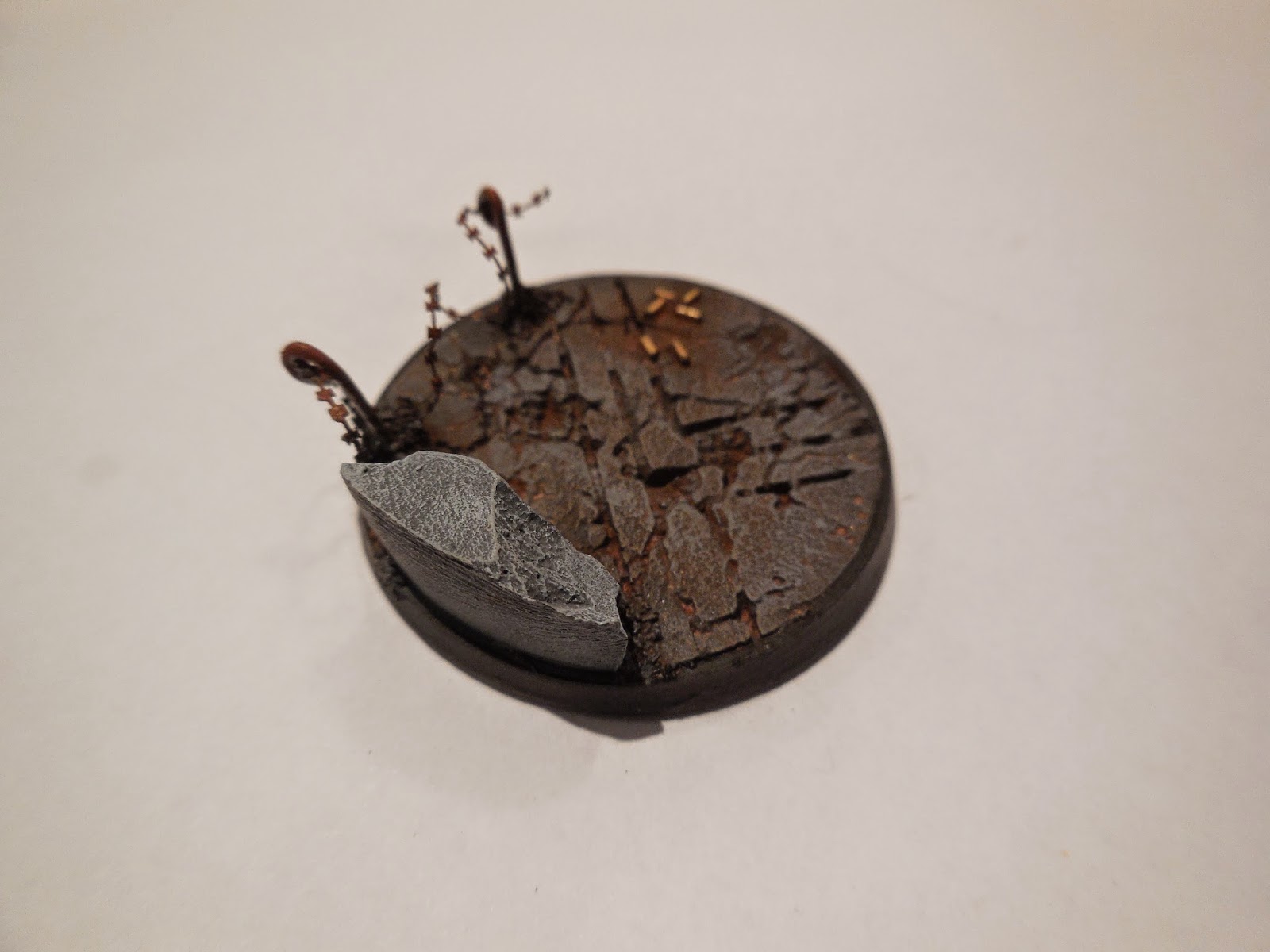 This technique is very simple, with half a dozen colours and a couple or pigments I have created a nice simple base, which has an element of narrative to it. In my mind, someone was firing over this wire, it may even be the model I pose on it. Who knows?