G'day, Macca here with a pretty in-depth tutorial today, focusing on modifying Urban Rubble bases. The original bases are from Secret Weapon Miniatures, as are 3/4 of the components I am using. The reason I am modifying these bases is I want two identical bases to look different once I base models on them.

This Tutorial is broken up into two parts: This part deals with the construction, and the next part deals with the painting (find it here). As they are both large, I decided that people can pick whichever they are more interested in, and if they like both, then they can read them both. 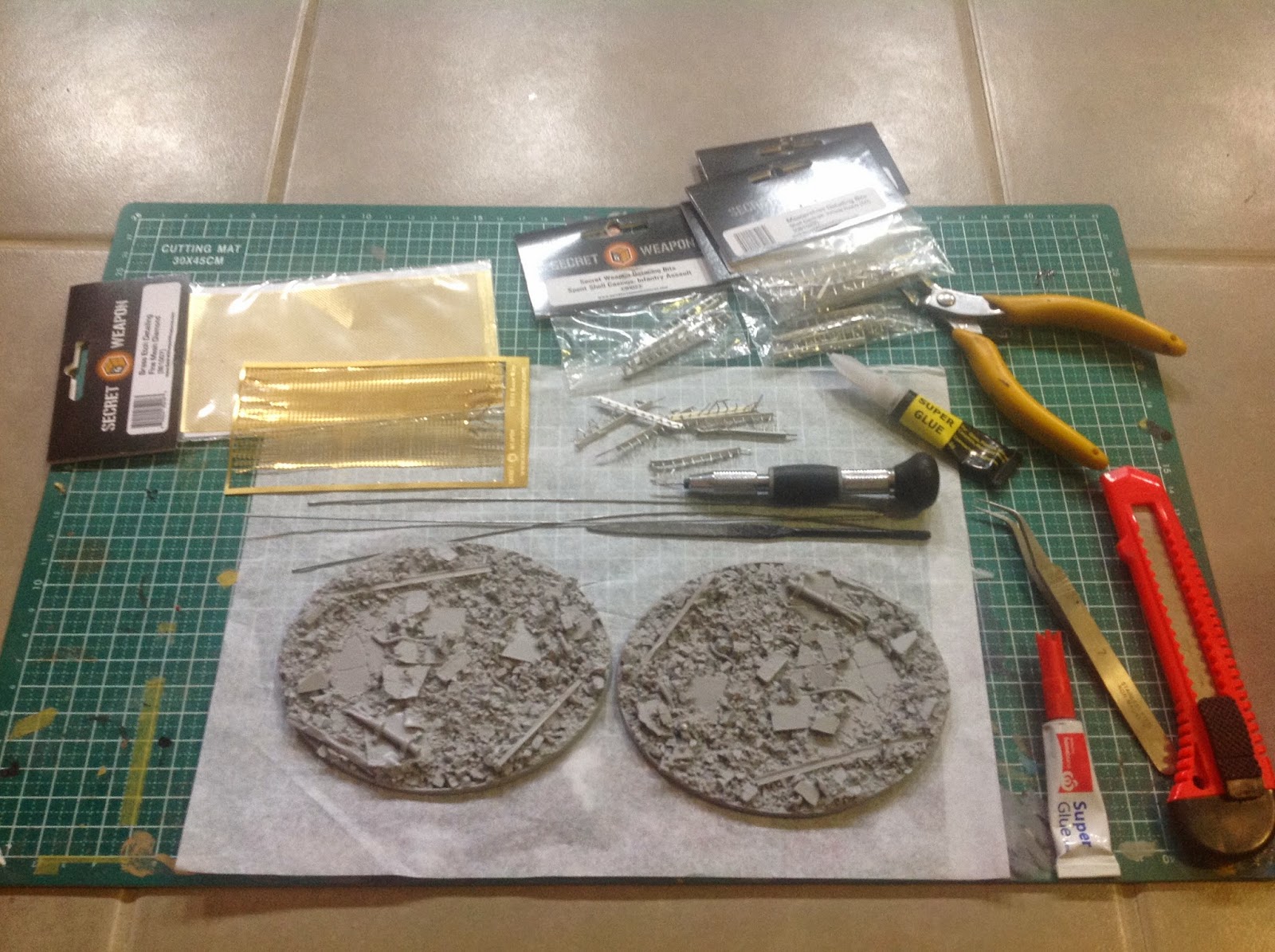 First up, I took some of the florists wire and twisted the wire into a small loop. I then cut this off in order to get a figure '9' shape. 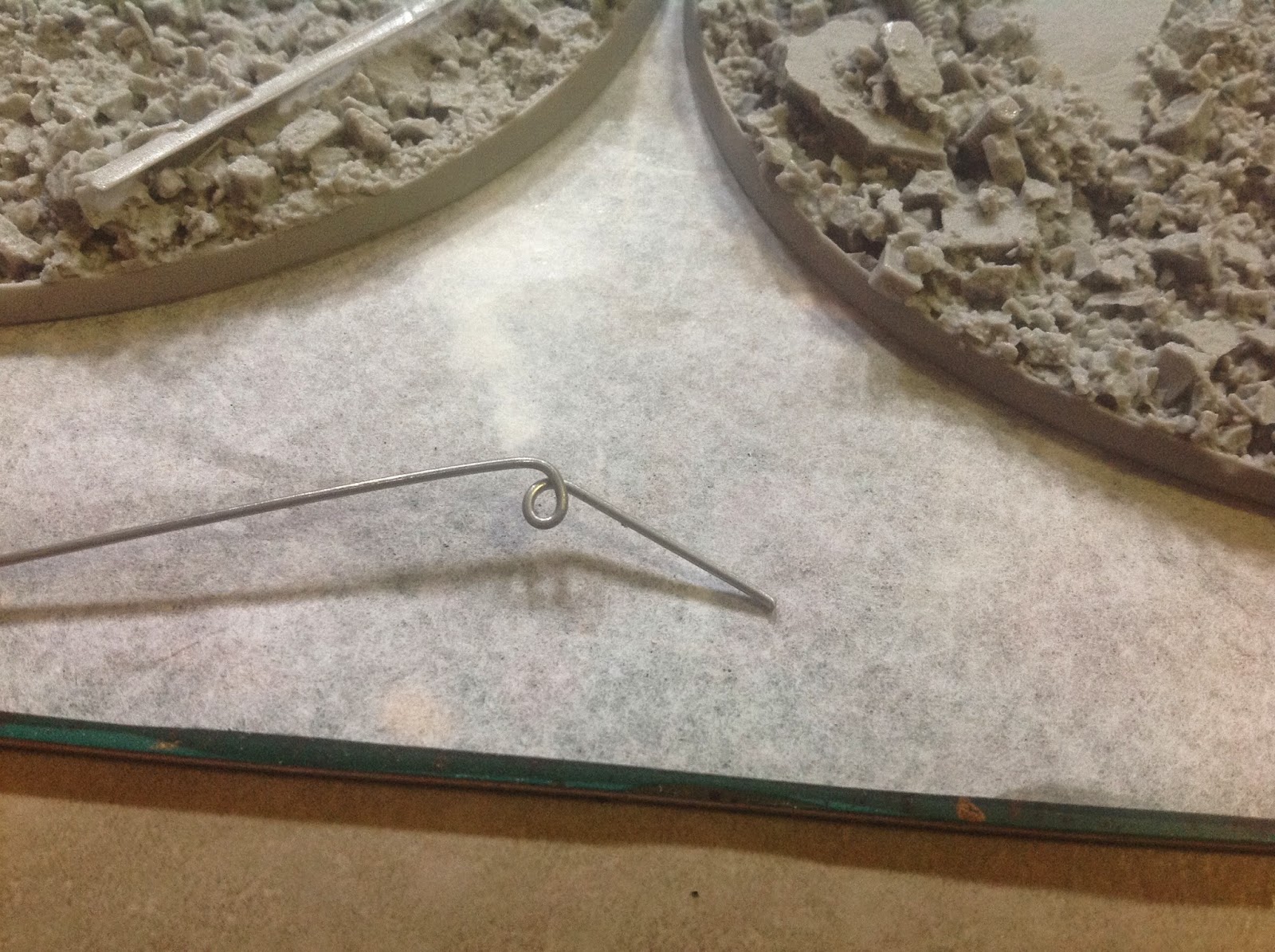 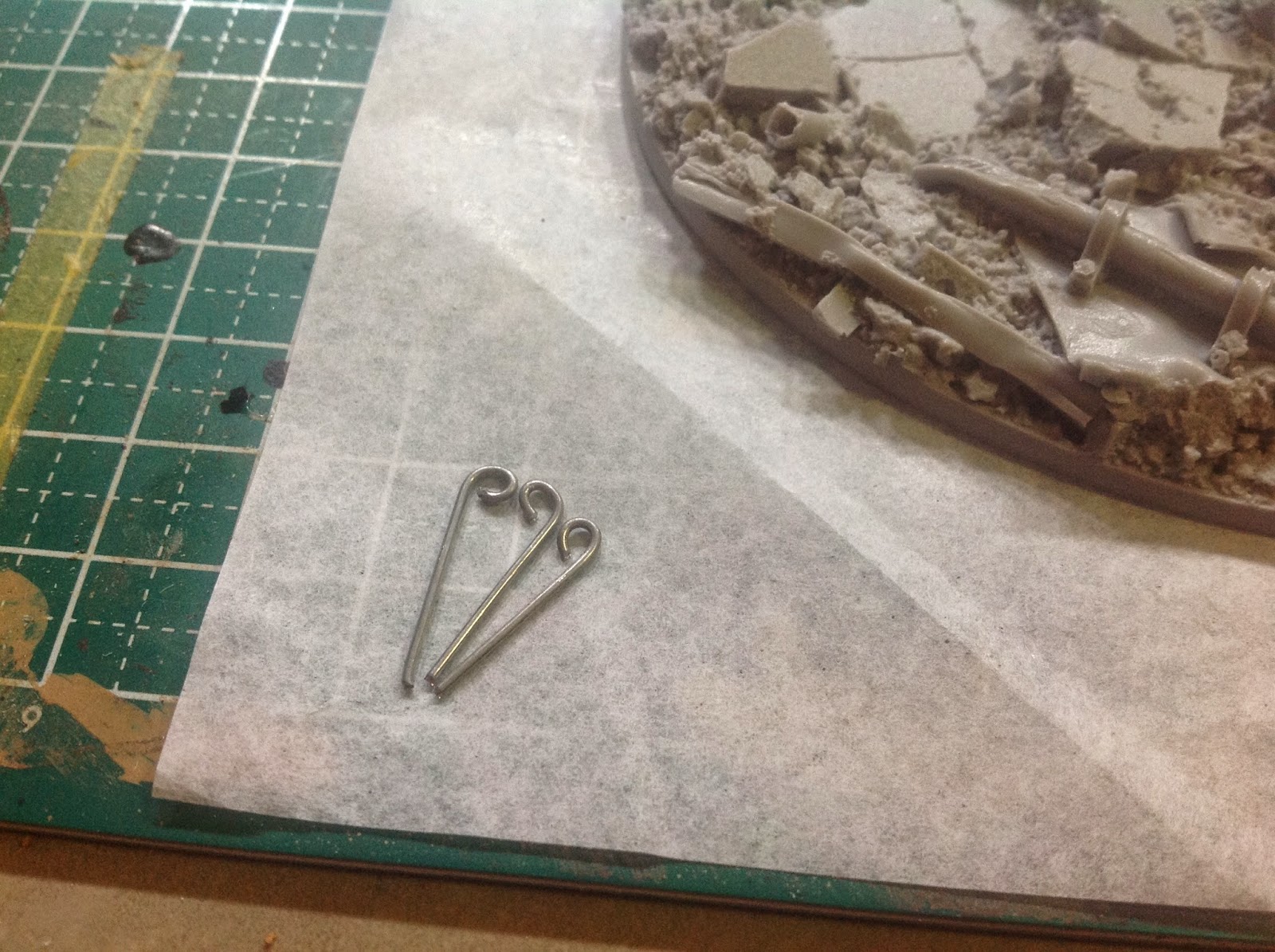 Next, I drilled 3 holes into the base for the three pins to go into. These pins will act as stakes for my barbed wire. A little super glue and they were in place. 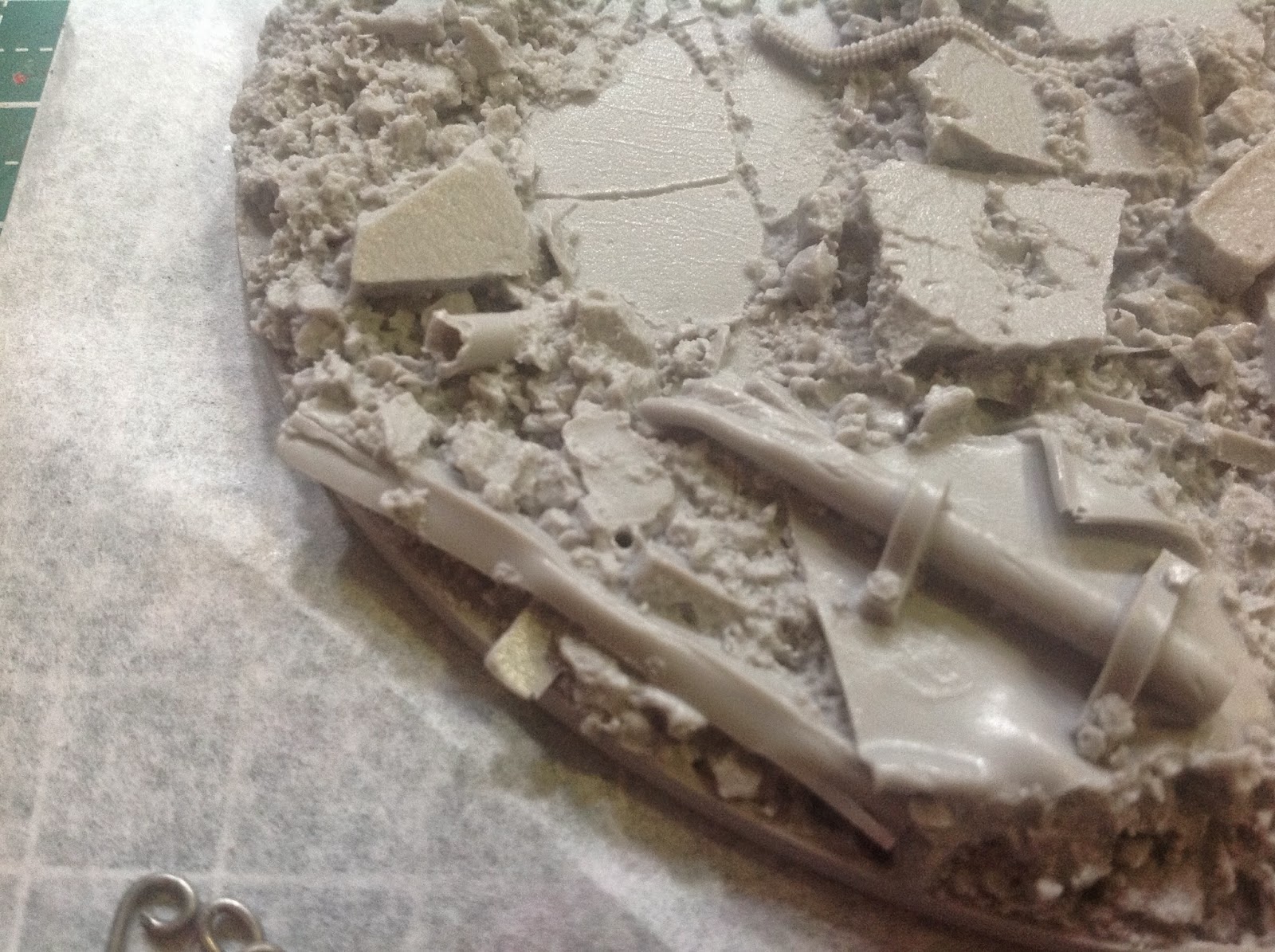 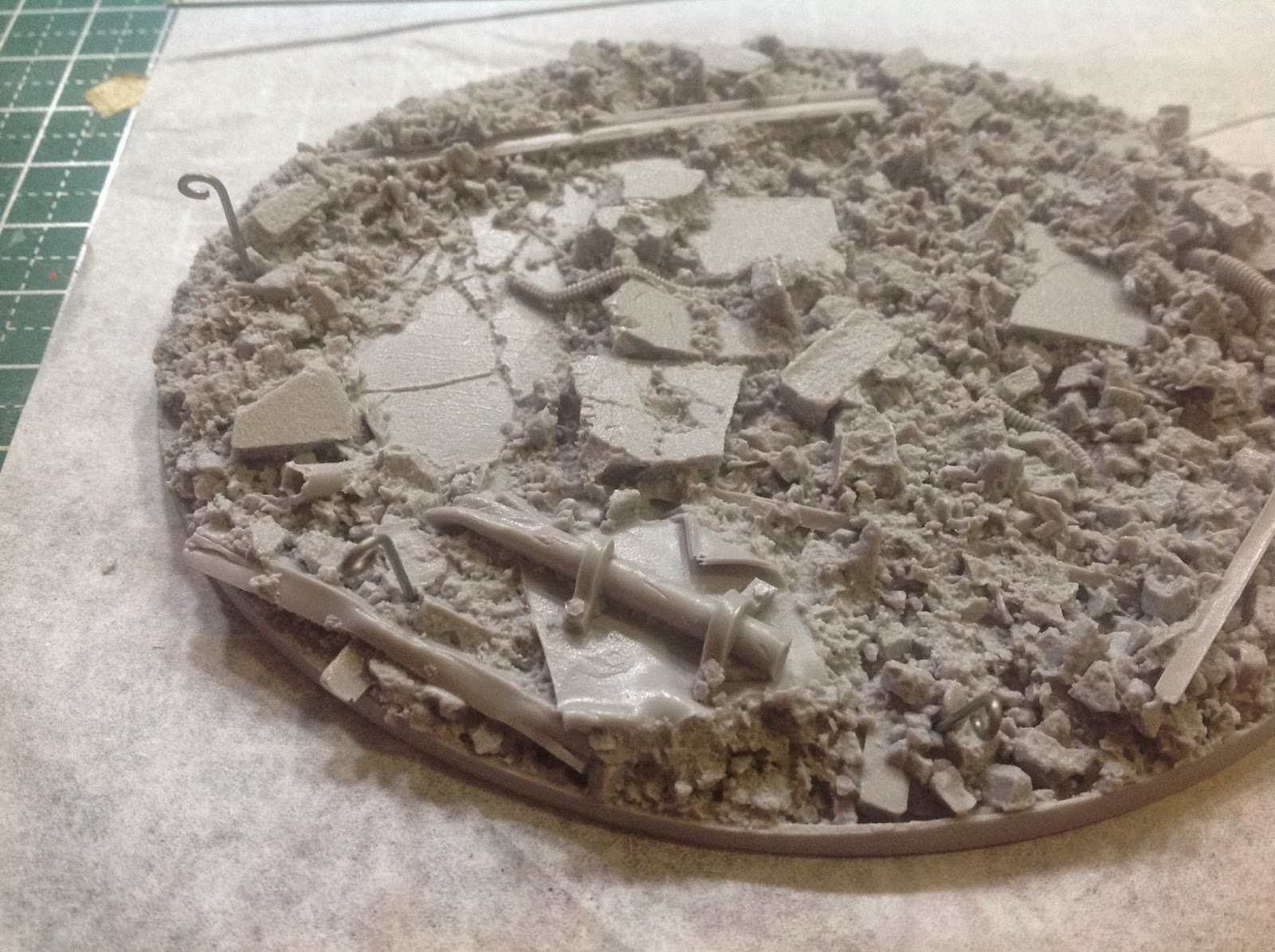 I carefully used the hobby knife (box cutter, really) to cut a segment of barbed wire from the brass etch. Once cut, I wound it around a screwdriver, in order to create a coiled shape. 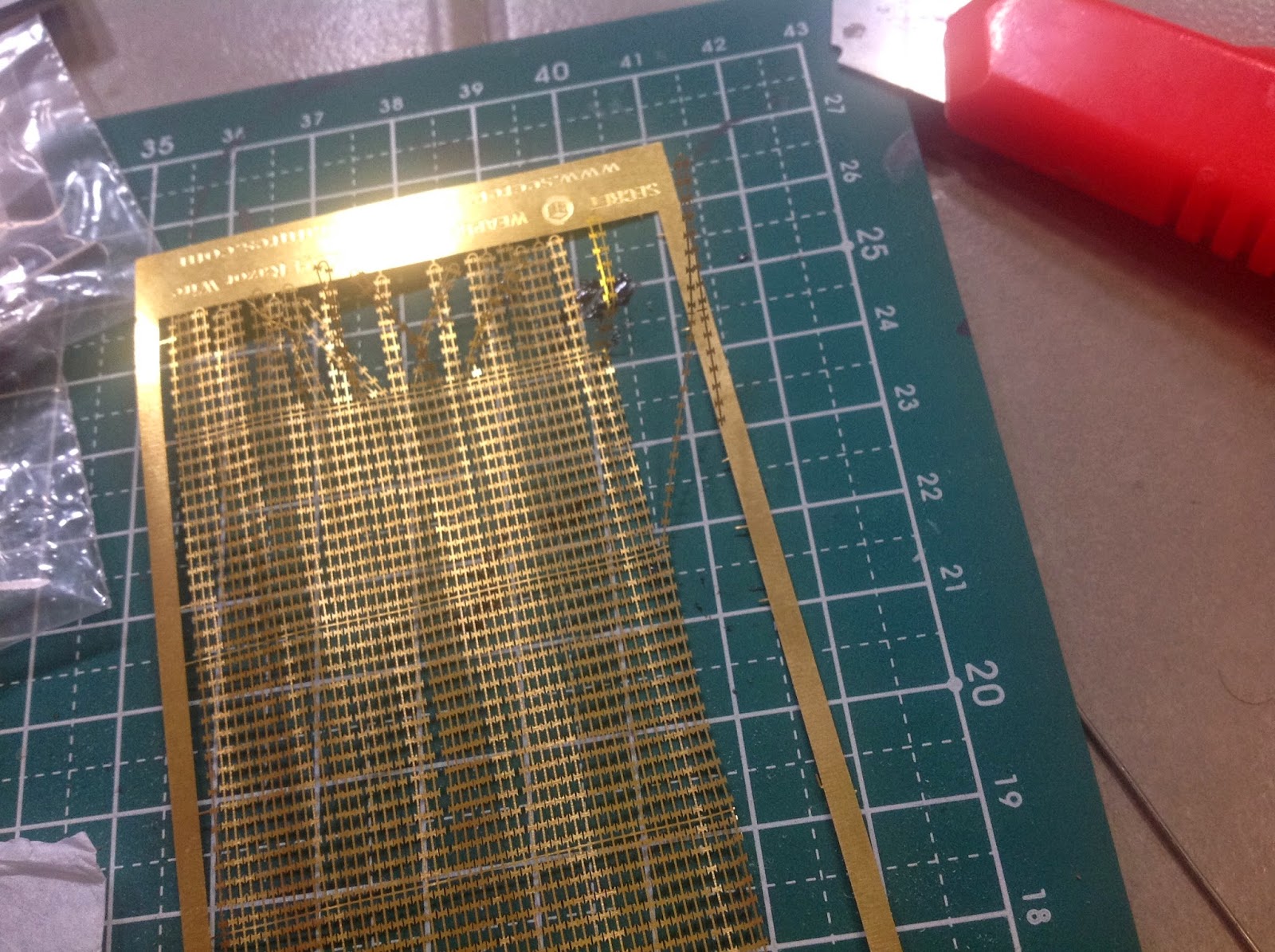 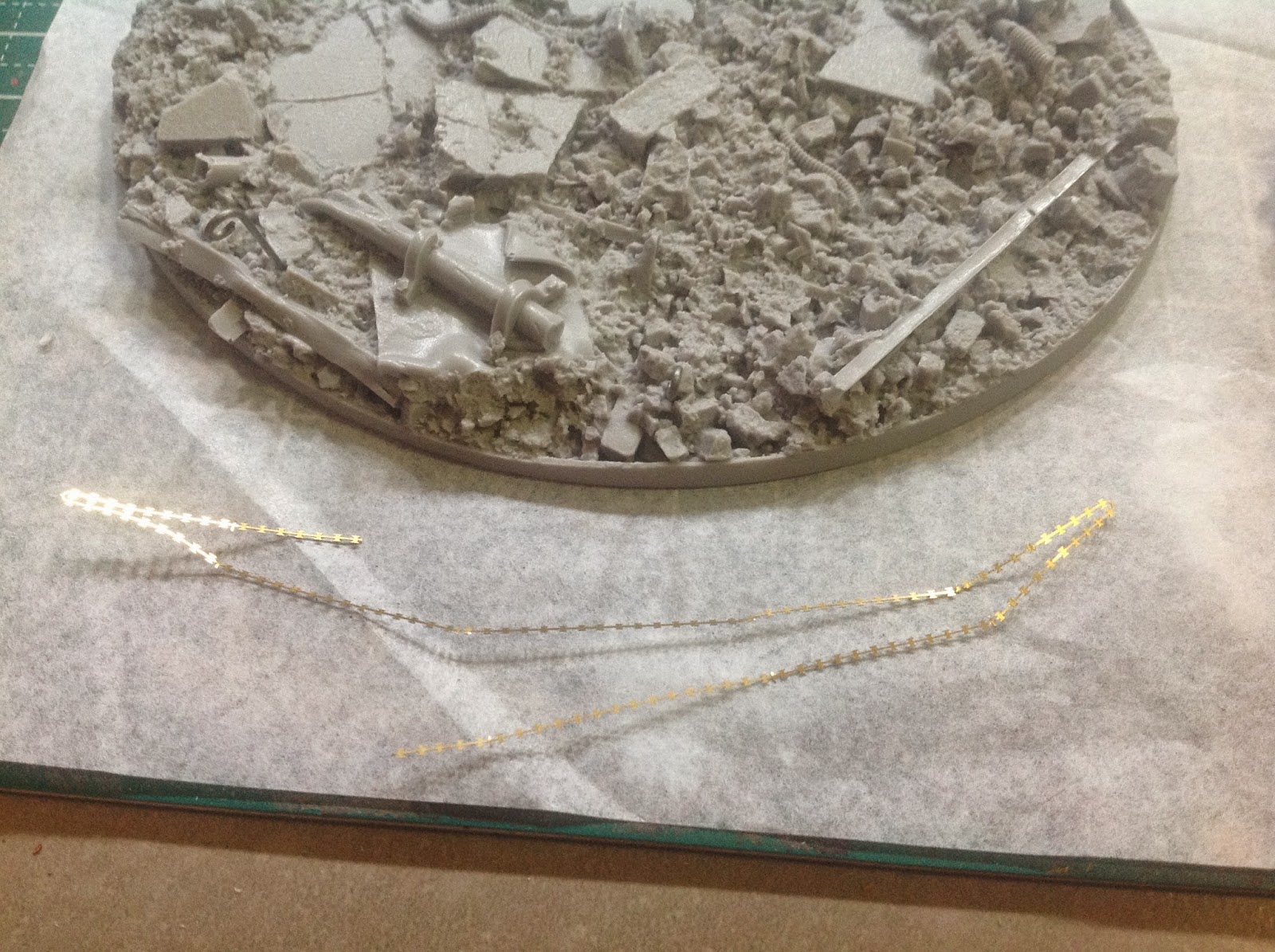 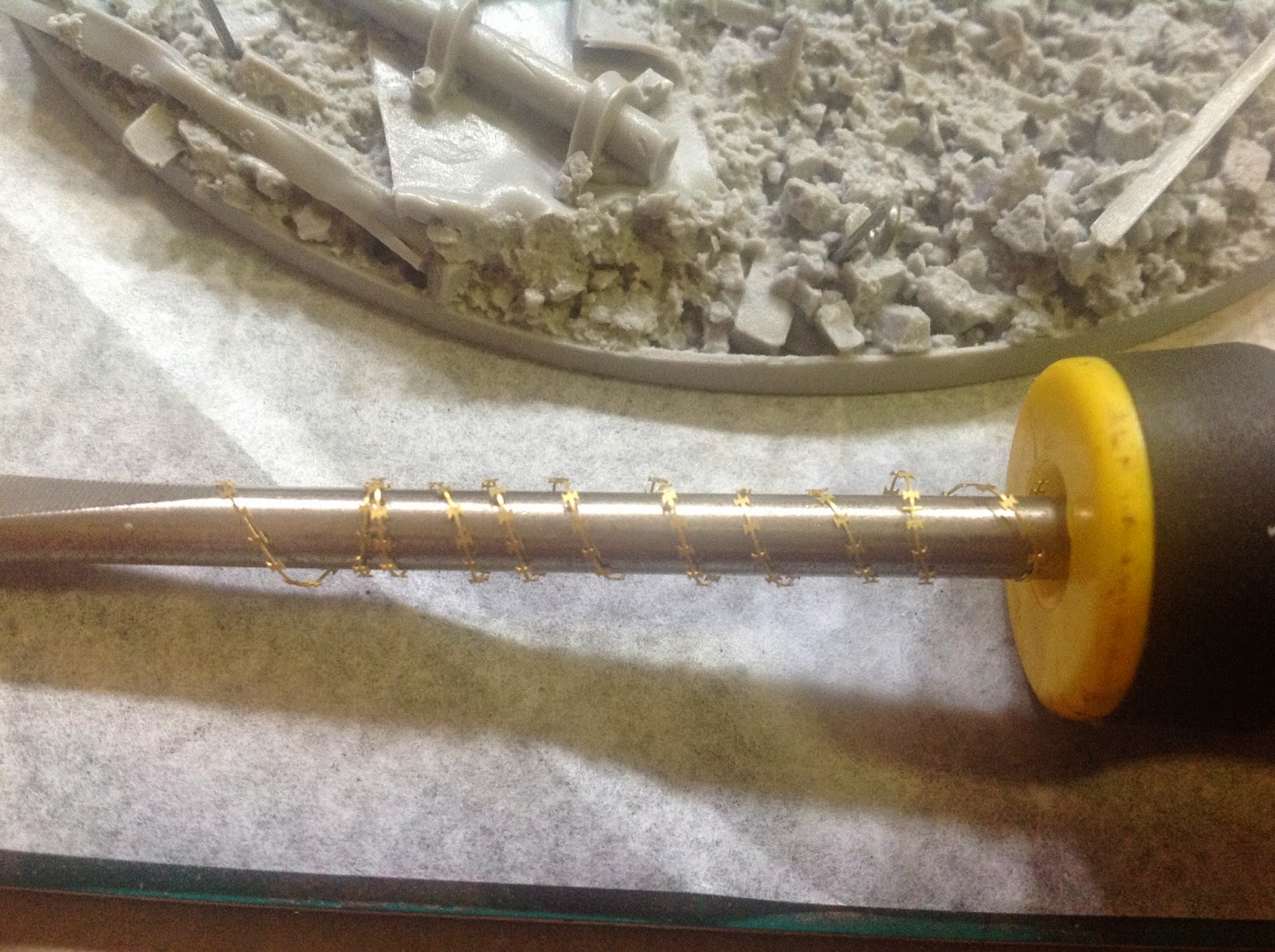 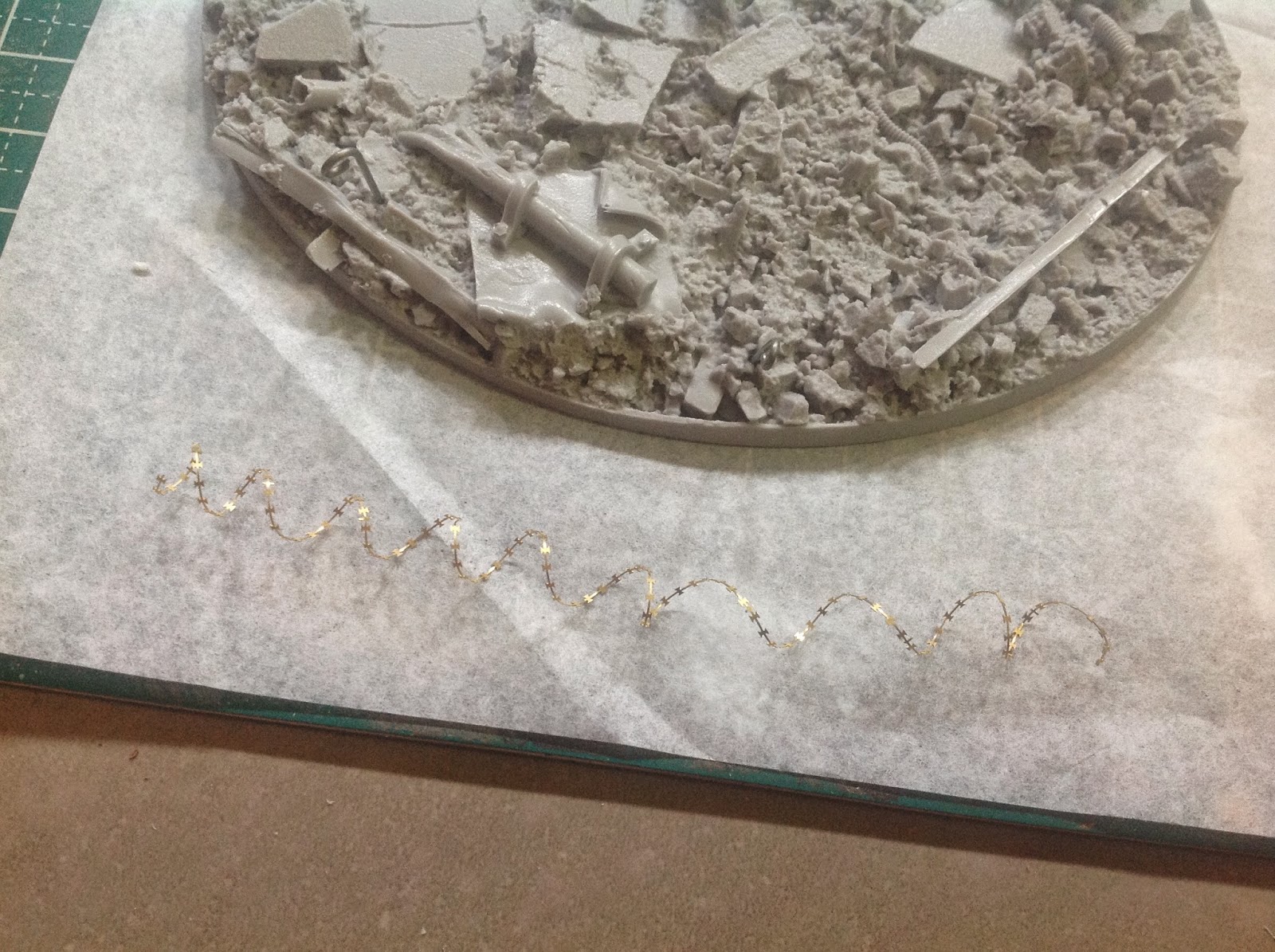 After removing the coil, I wound it around the stakes, and glued it into place. The key here was not to have a neat and tidy coil, but rather a loose, mishap wire which is damaged and old. 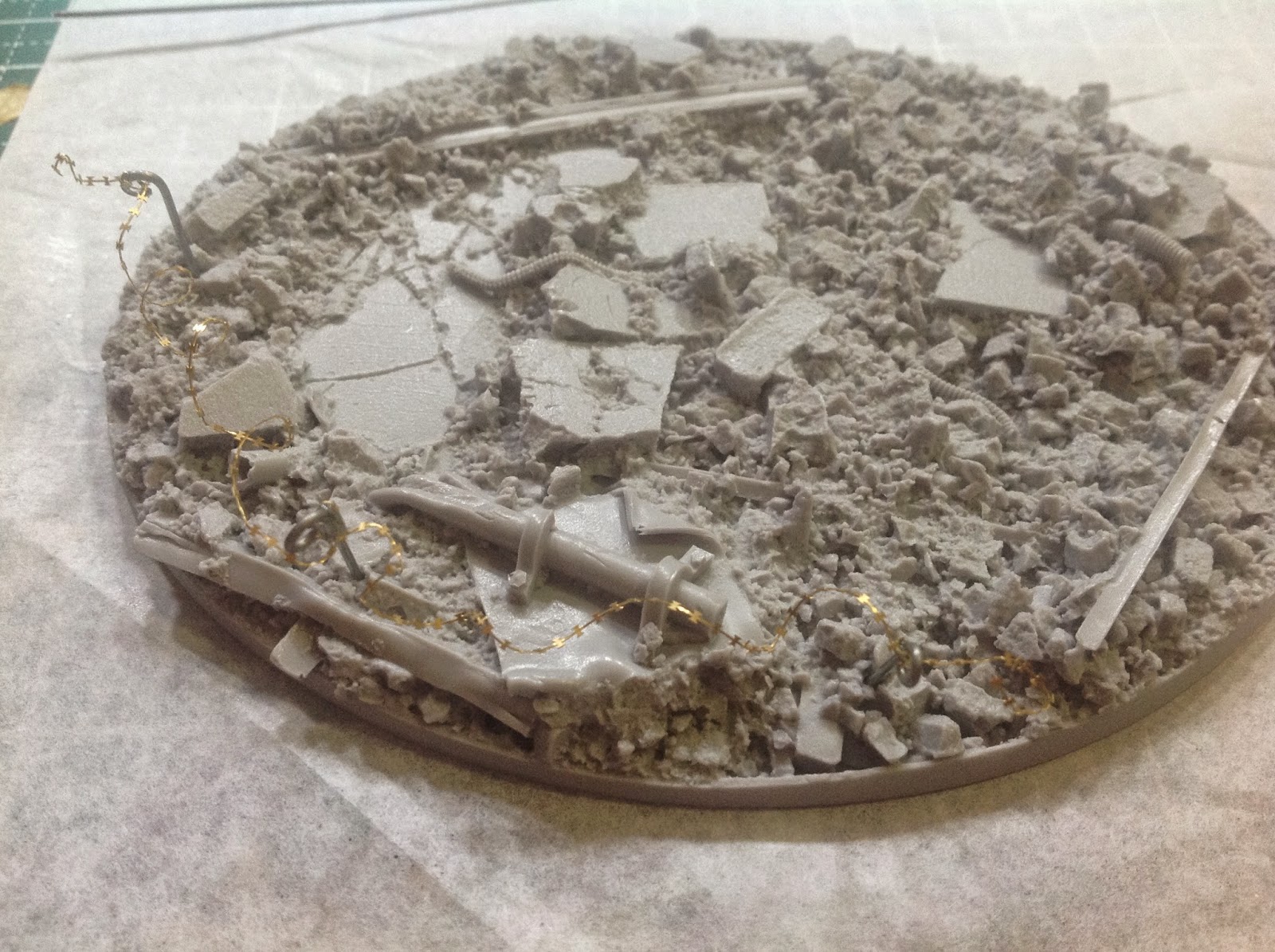 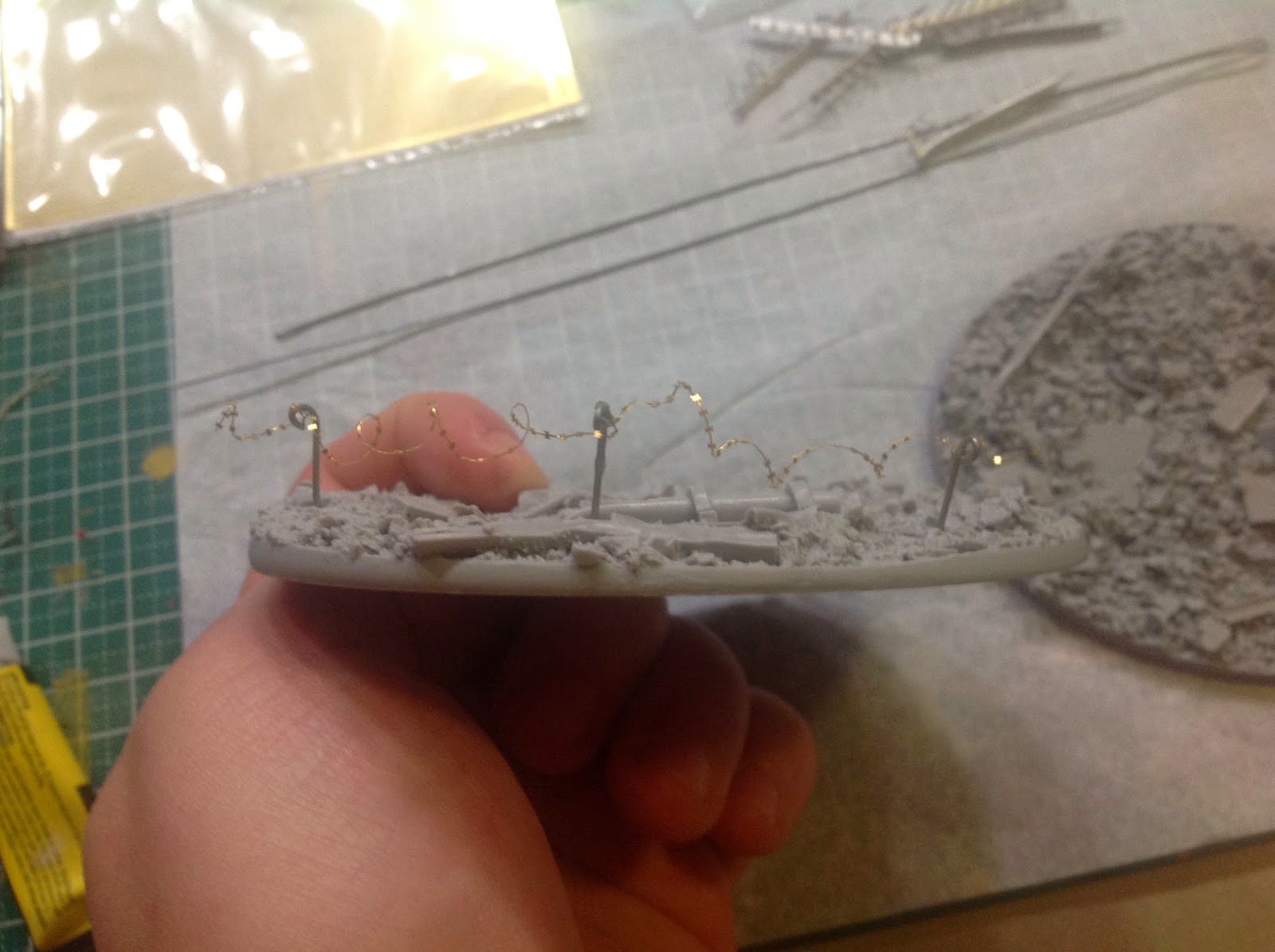 After the wire was done, I cut a small piece of etched brass mesh fencing, and toyed around with it on the base until I found an area I liked, I then glued it down. 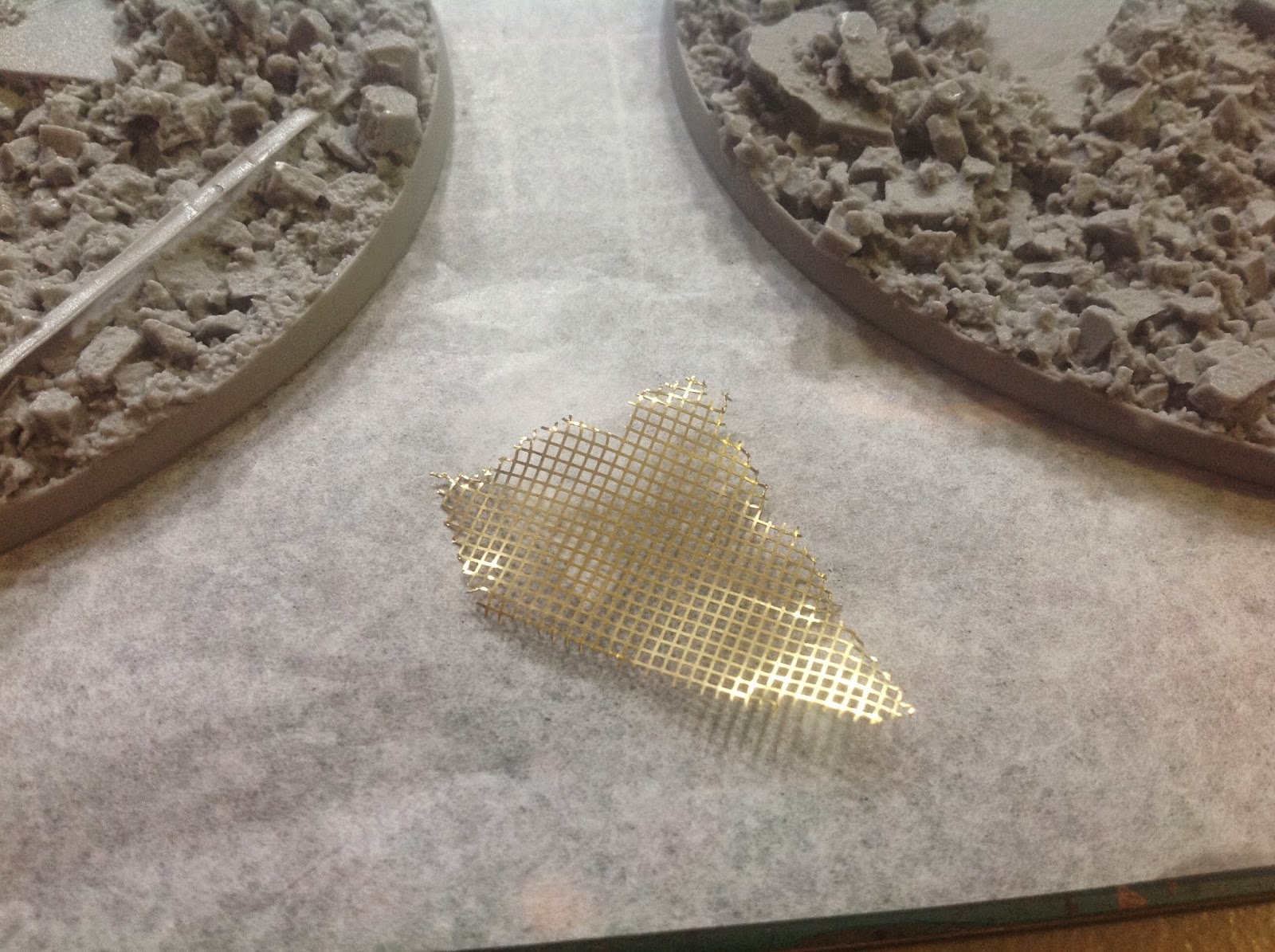 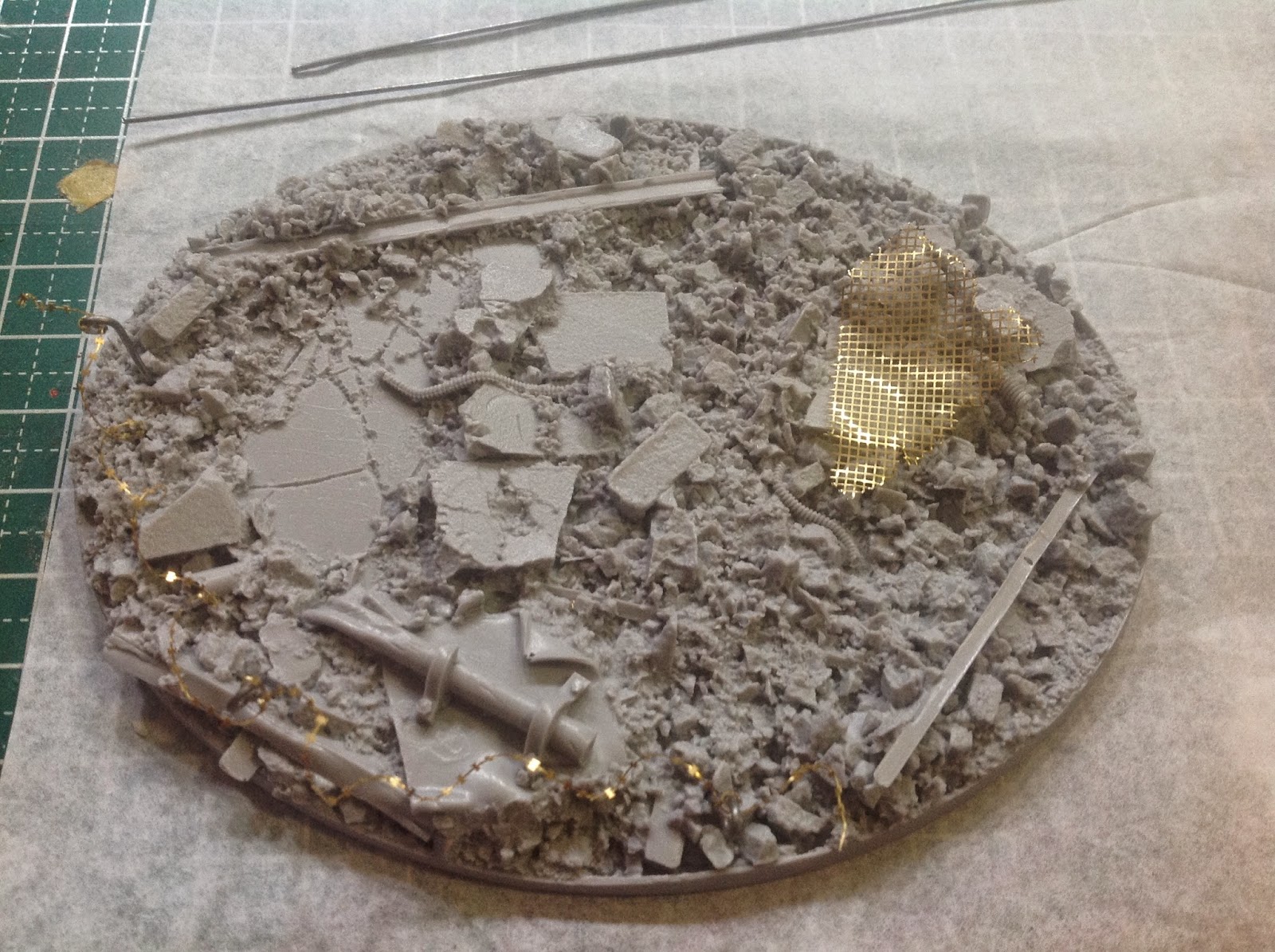 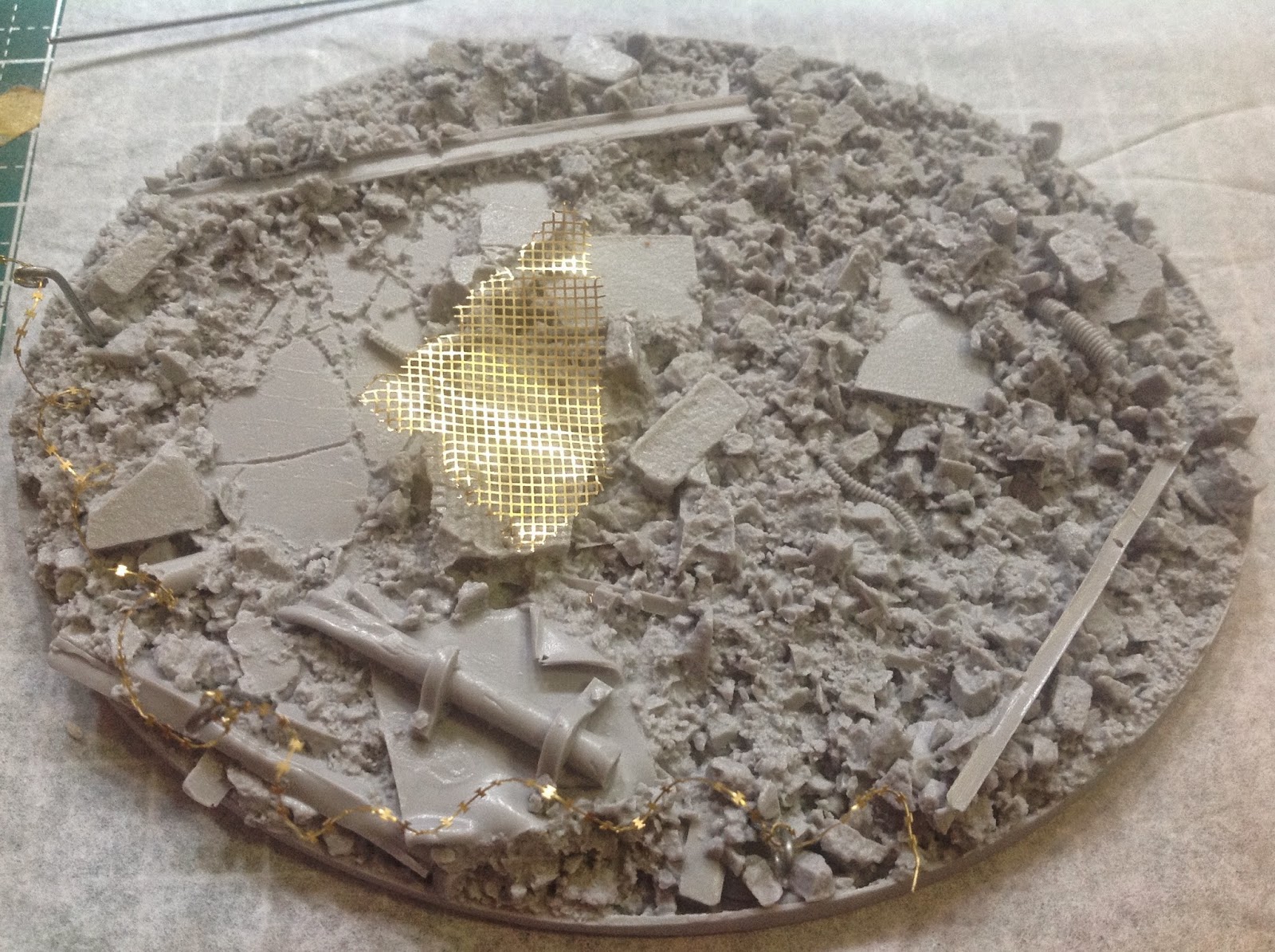 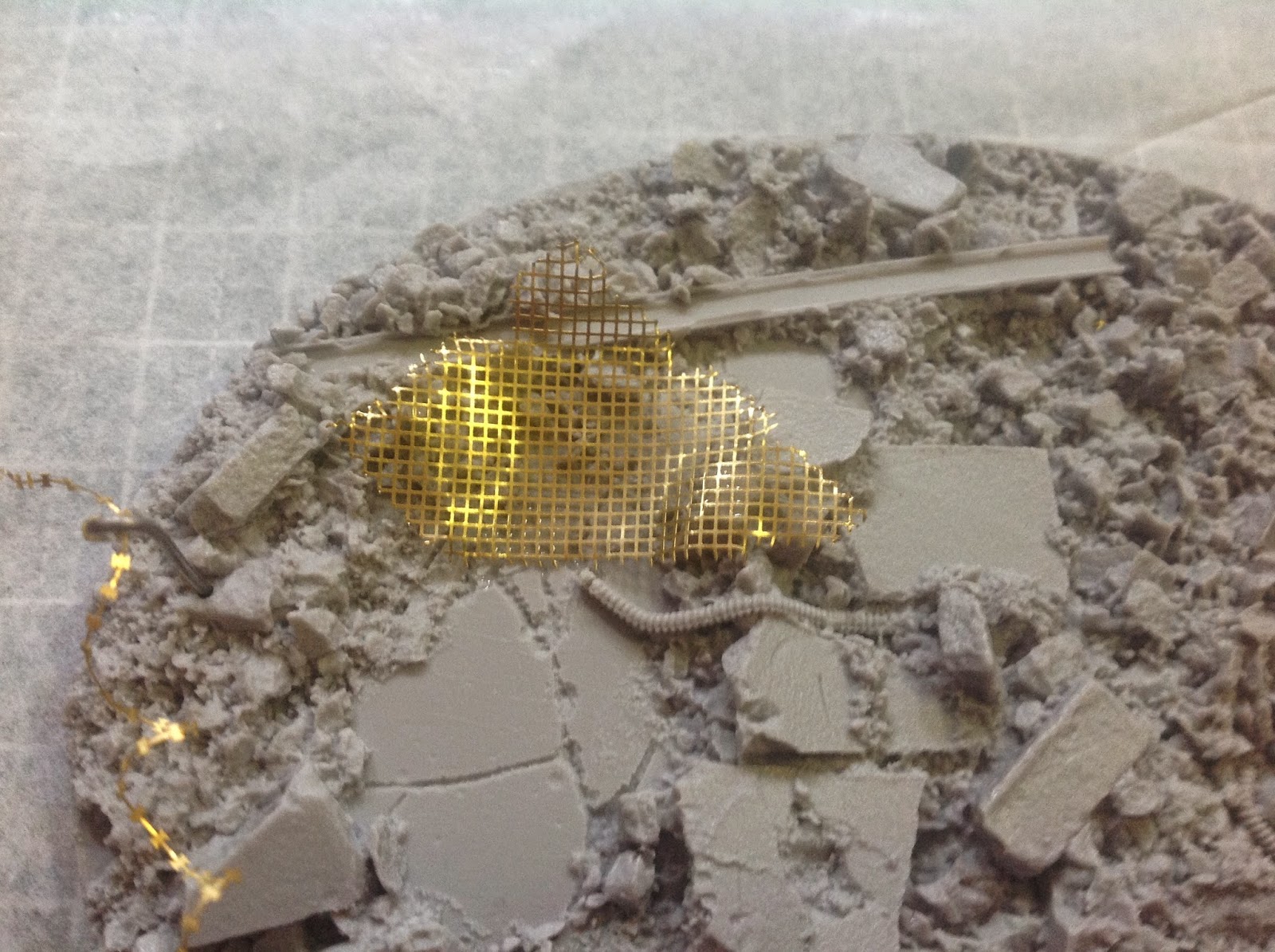 Out come the shell casings. I used two sizes here, representing rifle ammunition and spent grenade casings. I then put a drop of super glue on a piece or card, and dipped the casings into the glue using the tweezers, before placing them in small clusters on the base. 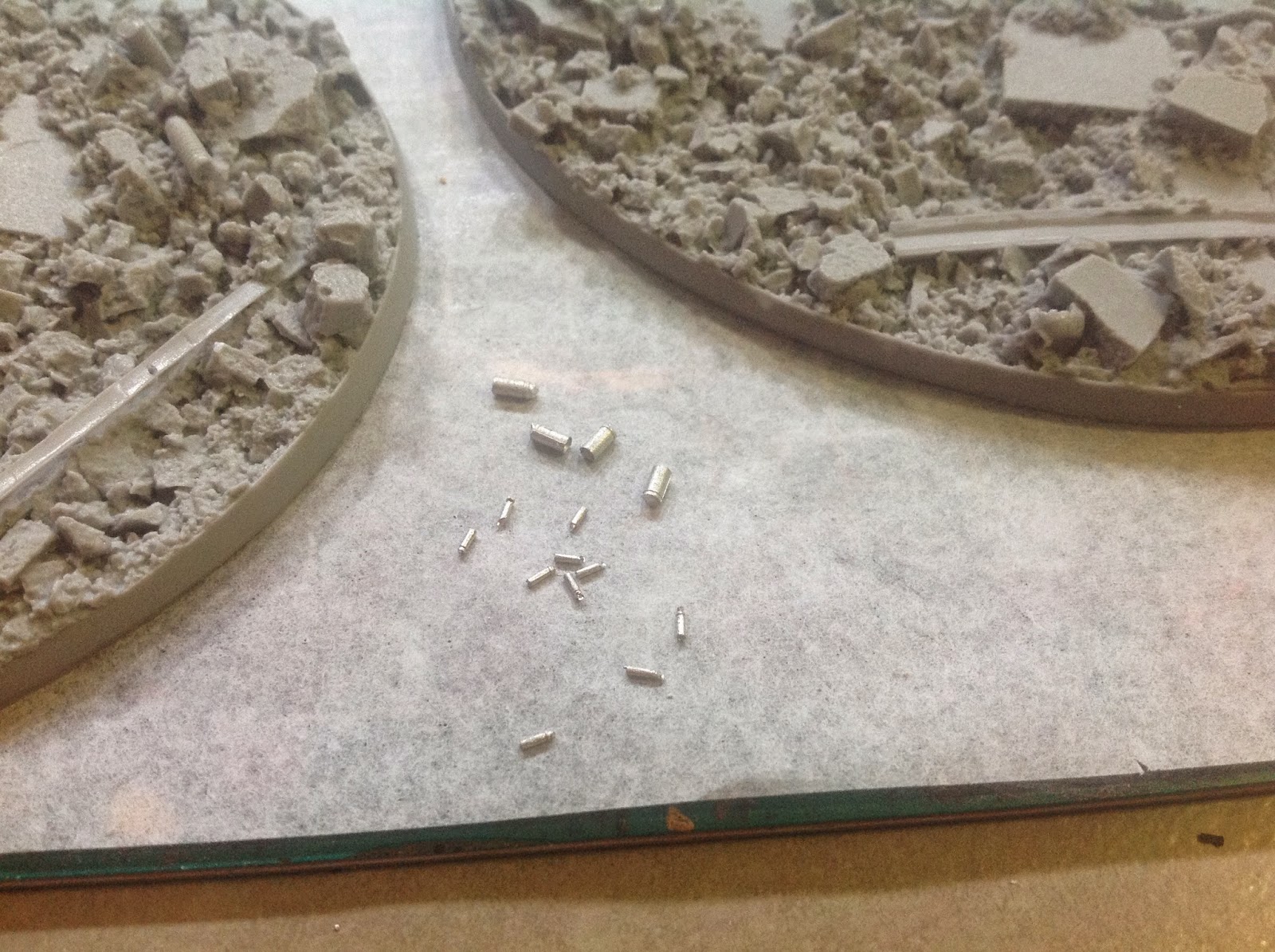 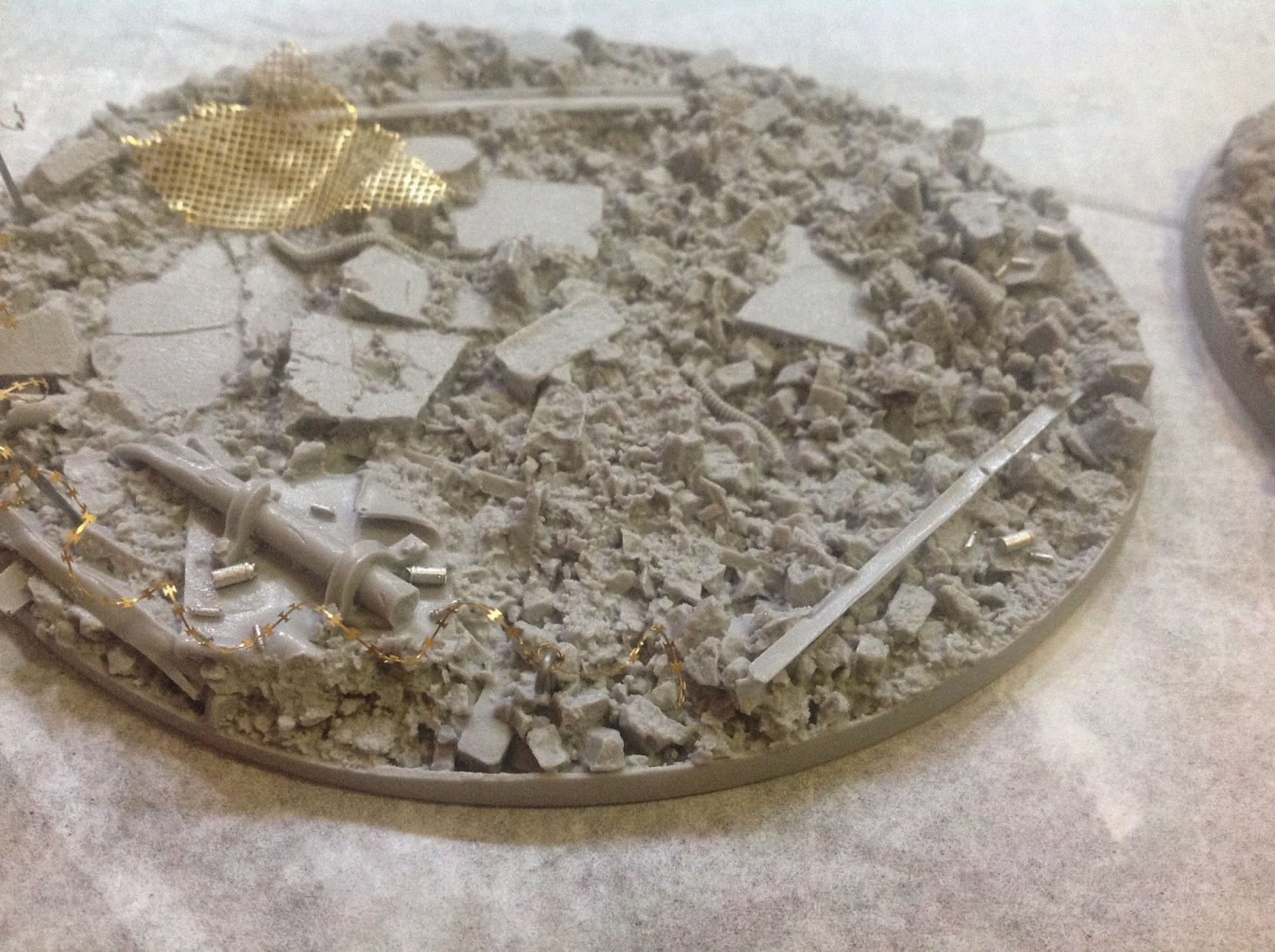 That's base one done. 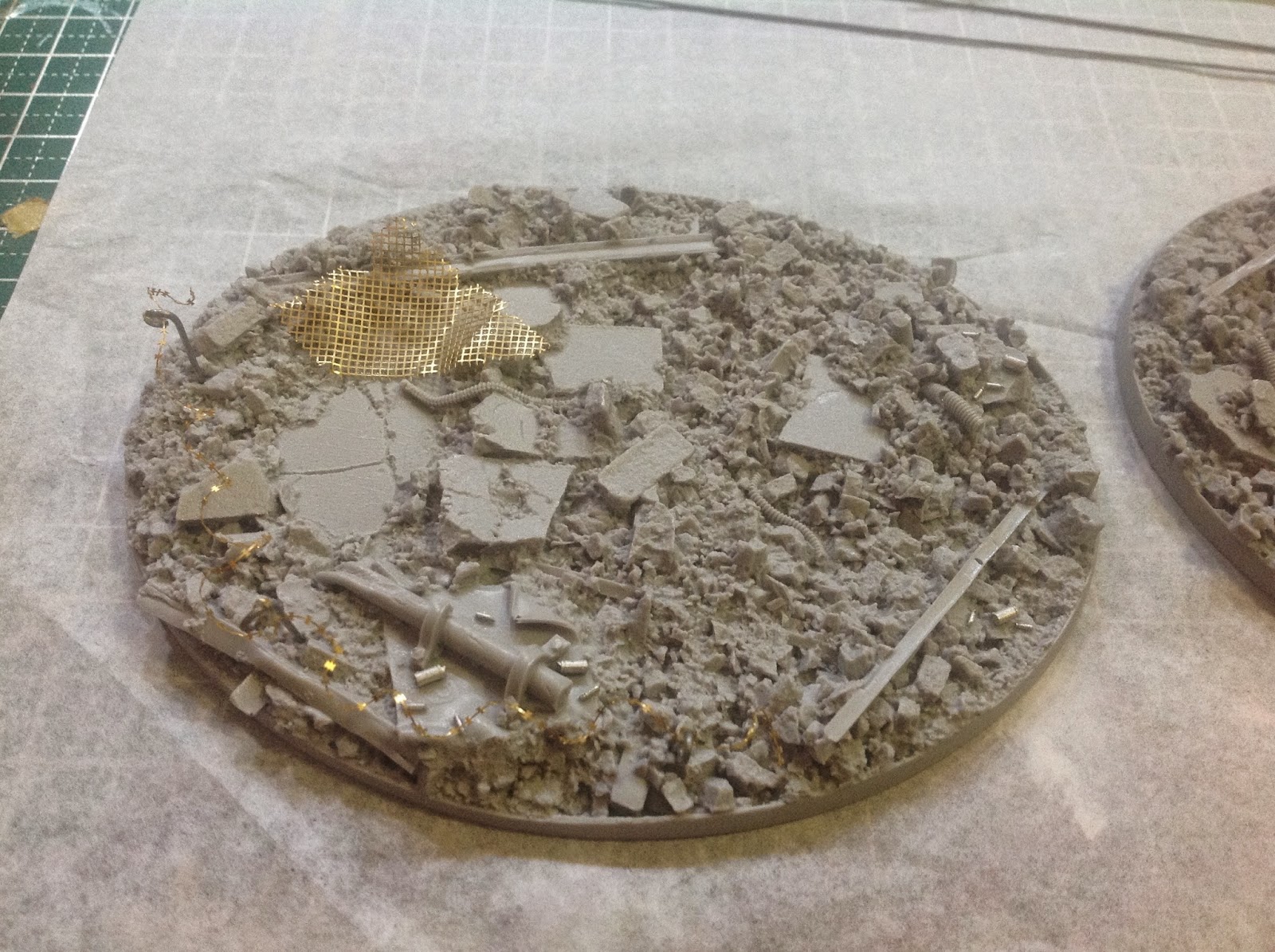 On base two, I decided to go for a ruined mesh fence. I started by cutting up some more mesh, as well as a pair of pickets. These pickets were then measured and glued into place. 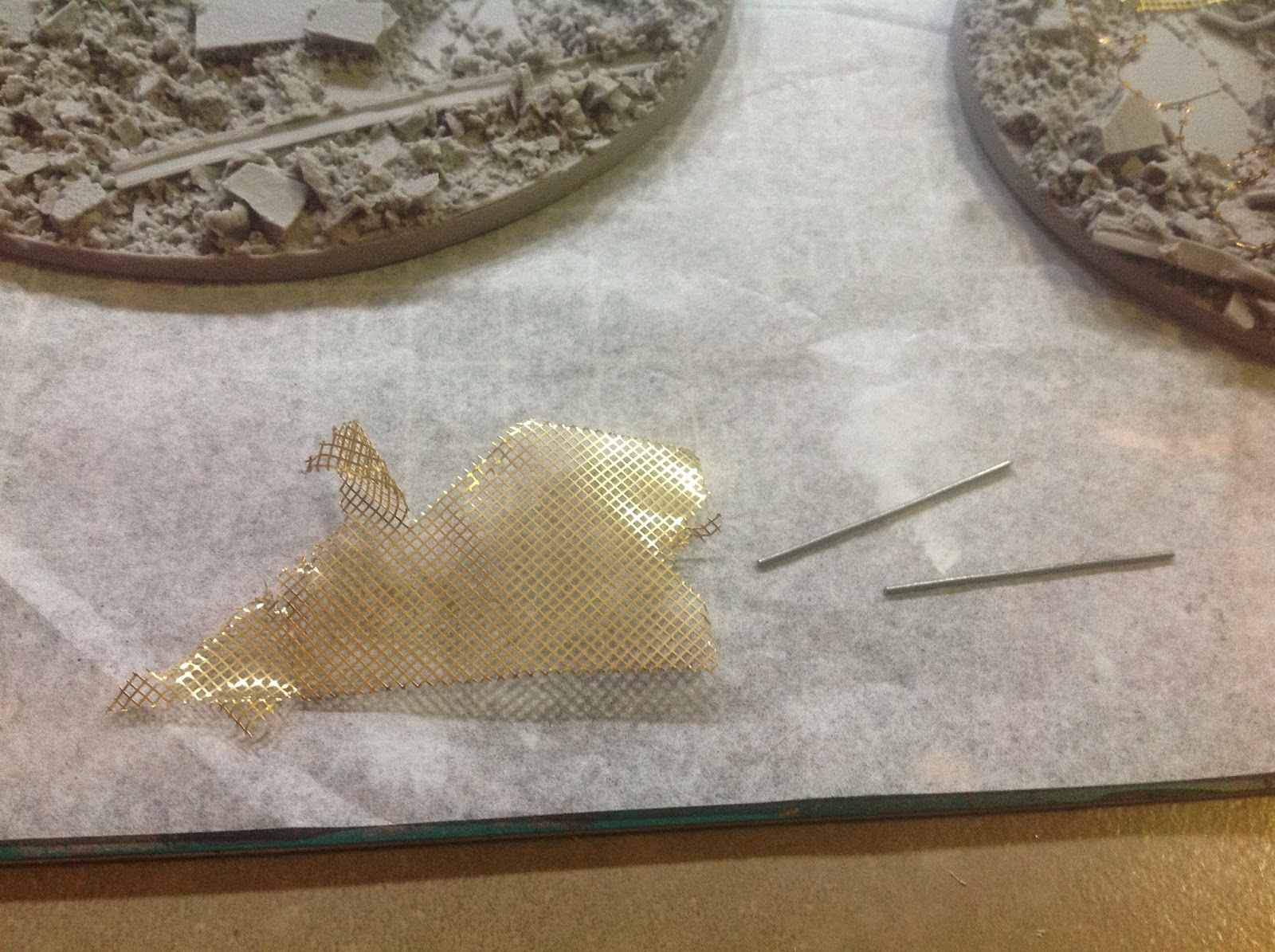 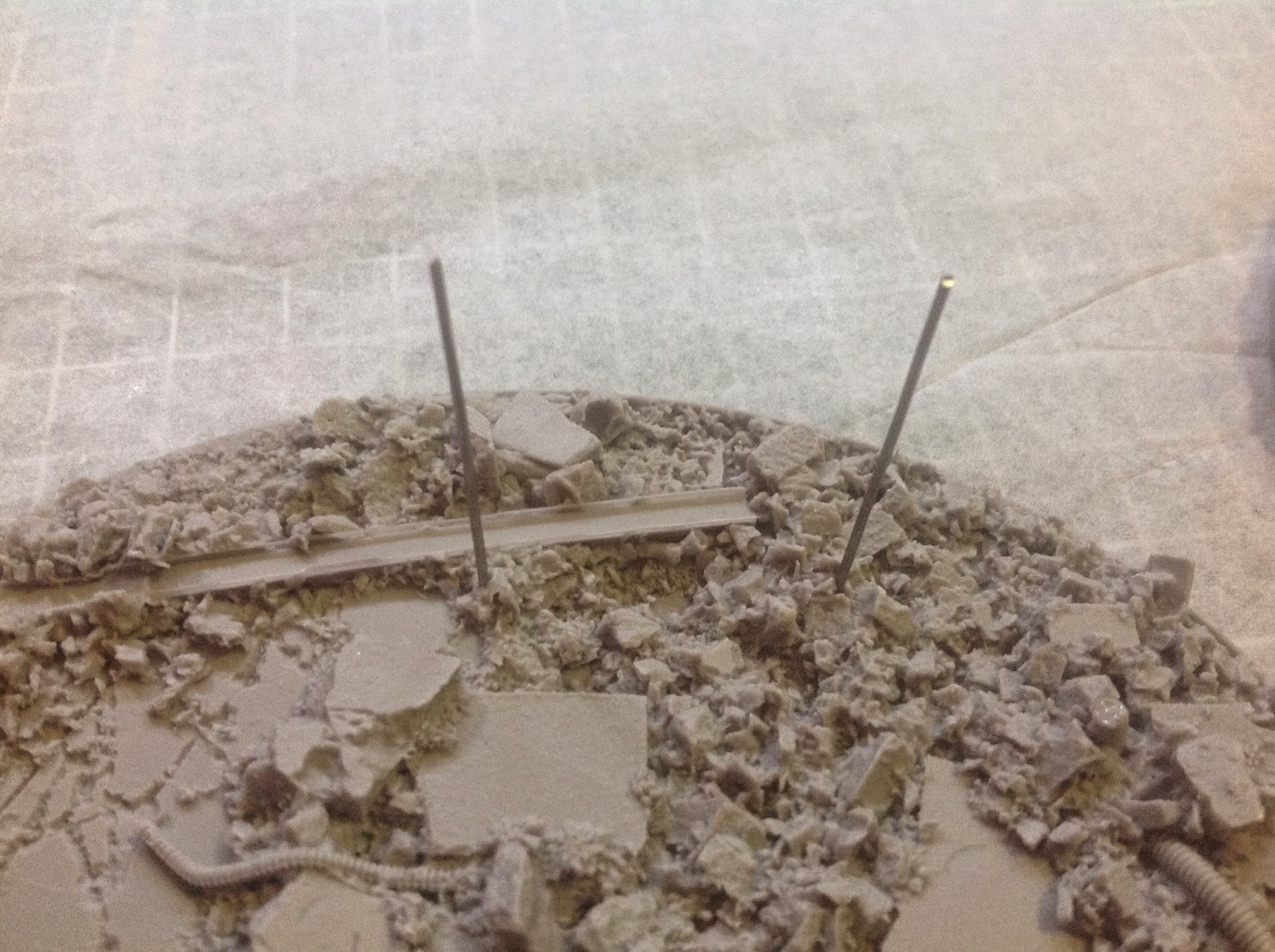 I next glued on the mesh, as well as a small GW aquilla and a little coil of wire to top it off. 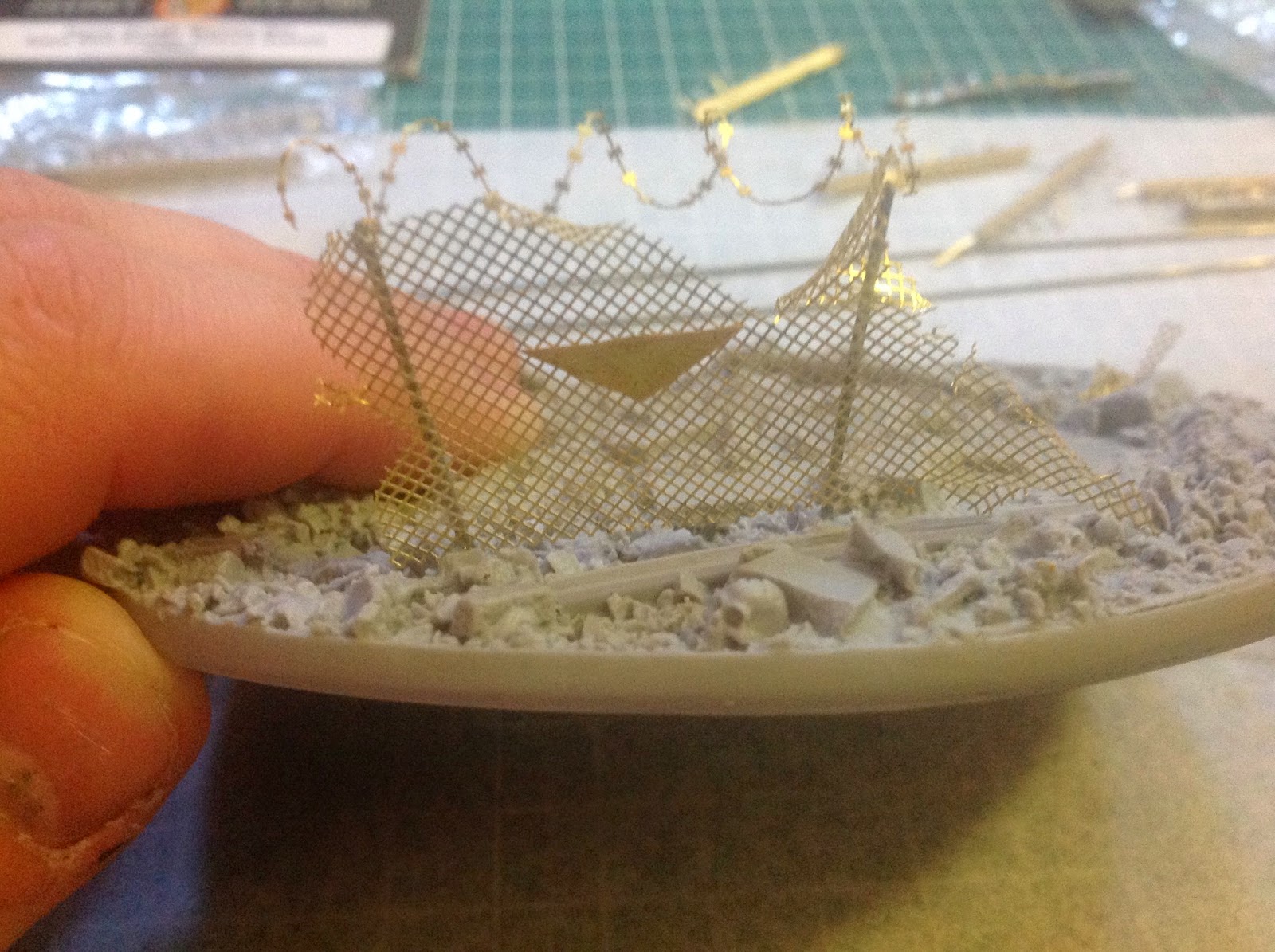 I looked through my massive pile of junk and bits, and came across a lamp from the Cities of Death boxed set. I decided to add it to the base to show that this really was once a city, not just a random building that has collapsed onto the base. 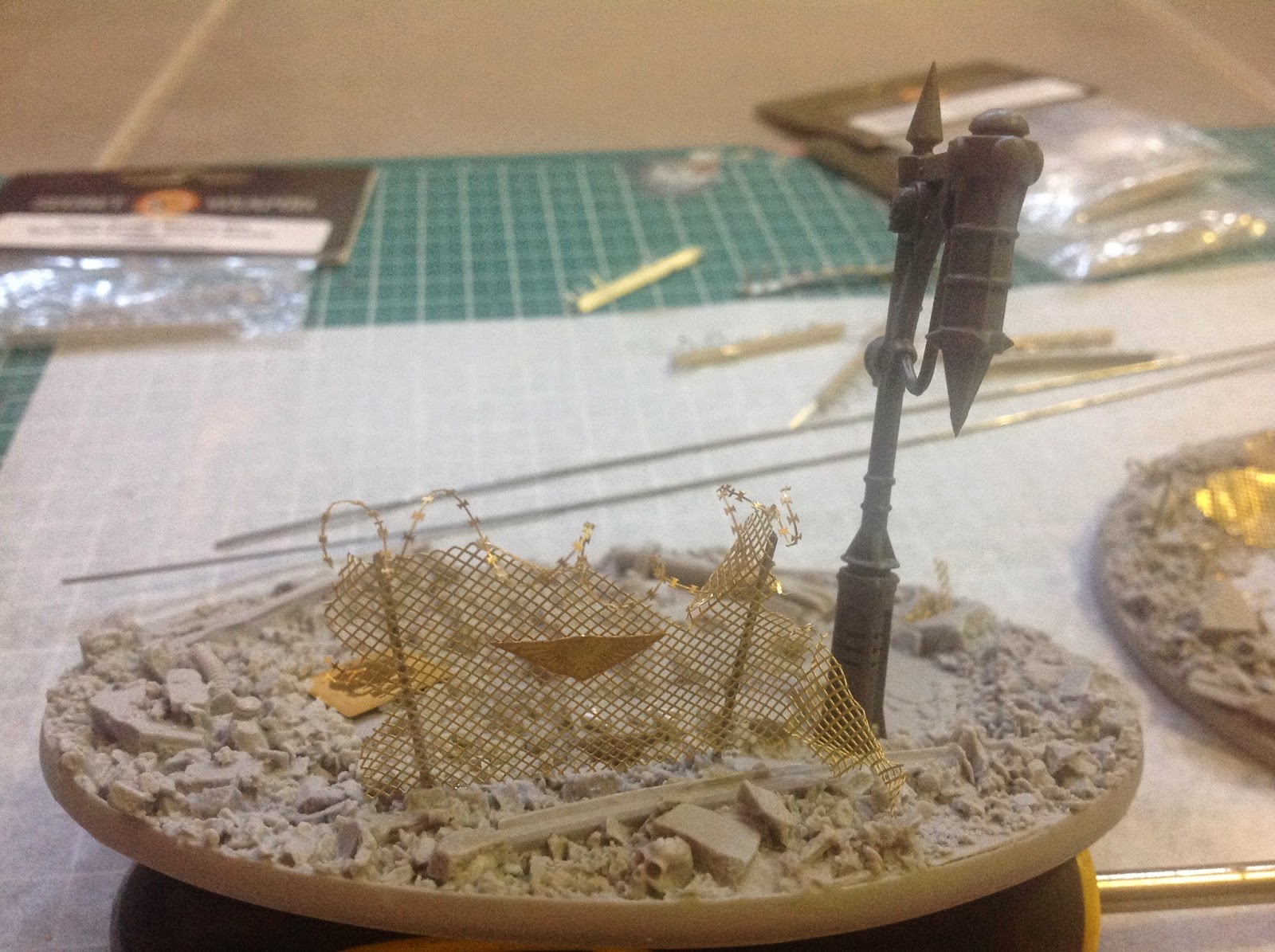 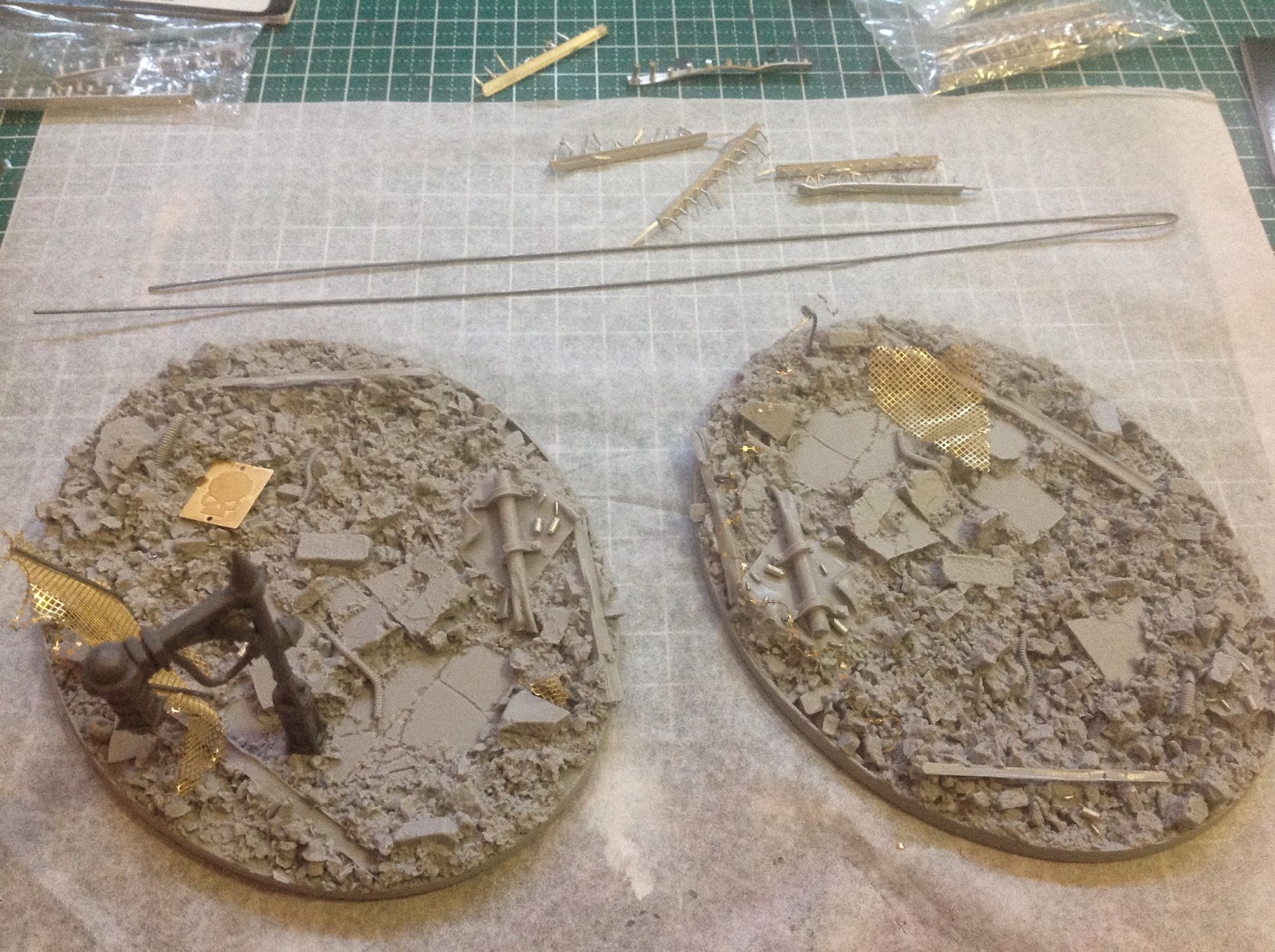 After all that, here we have the finished results. Simple, fast, easy.

If you want to see how I painted it, check out part 2.

Email ThisBlogThis!Share to TwitterShare to FacebookShare to Pinterest
Labels: 30k, Basing, How To:, Scenery, Tutorials, Weathering