Hey guys, Spraggy here to talk about the ins and outs of the Stone Gauntlet Rite of War for the imperial fists. The VIIth legion is reknown for its skill at assaulting, and defending static positions in a variety of different theaters. The Stone Gauntlet rite of war certainly provides a rules set that brings this trait of the Imperial Fists to light on the table. 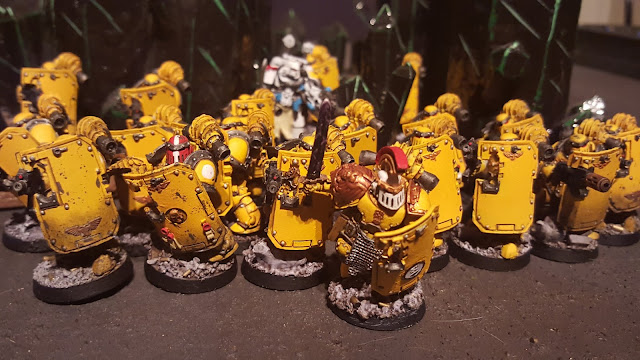 Pre-requisites to take this Rite of War:


Pre- requisites to take this rite of war are of course the HQ with master of the legion special rule (In order to take a rite of war) and to fill the two minimum troops requirements with Legion breacher squads. For starters, lets look at the HQ component.

Any one of the Imperial Fist special characters allows you to use this rite of war but i prefer to tailor a praetor to the role. This guy is your heavy hitter. He will give some close combat bite to your shield line so he should be tooled out offensively to handle any enemy counterpart. Now you can go two ways with this, either put faith in your defensive gear and use a thunder hammer or powerfist to take the enemy out more surely albeit slowly or you can opt to utilize the praetors initiative and arm him with a paragon blade (remember also the instant death rule of a paragon blade). Defensively i feel you can't go past the boarding shield to give him that +1 toughness while in the unit. Also he will gain a 5++ in close combat. Alternatively you could take a iron halo gaining a 4++ instead but forgoing the +1T which would affect more of your opponents rolls. Not to mention he will look cool and fit into the shield wall. This is pretty much all the kit needed for the praetor so he can stand in the shield wall and dish out challenges to the enemy. You could spend the 15 points for digital weapons but the only other points i would consider spending is the 50 points on the indomintus mantle effectively giving the praetor Eternal warrior special rule.

Secondly you'll need the minimum  two breacher squads. Personally i prefer to use squads of 10 and at least 2 squads in 2000 point games, 3 squads in anything higher. You can use squads of 15 or more to better effect but i prefer the versatility of having more smaller squads. The role of these guys is to simply march on objectives whilst blasting away at enemy troops in range. So you'll want to tool these guys up to ensure they get to the objective and then can hold it. 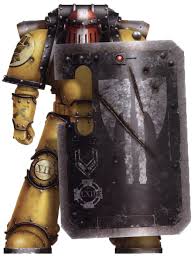 So for that matter i feel either plasma guns or melta guns are the best option for support weapons. Plasma means you can at least put out some anti heavy infantry fire and melta ensures you can slag anything without armoured ceramite. For the sergeant i prefer the trusty power fist but any thing to add a little extra punch in melee is good. A vexilla is handy and can ensure they stay on the table moving towards objectives but is optional. Now you should NEVER run or charge with these guys. Doing so forfeits the +1T and that's the best edge these guys have. Don't bother trying to chase down enemy infantry squads or isolated units. These guys just keep marching on objectives.

Support for the shield wall:

The next layer of support in this kind of list are the units which will support the breacher squads. By far the first choice for me is an apothecary detachment. Adding a Feel No Pain roll to your toughness 5 breachers makes these guys a very resilient unit to fire from anything equal to or less than an autocannon.

Second to apothecaries i would suggest support officers. These guys will add a little extra flair and story to the army as well as supply a little extra punch in close combat. Ideally you would have one for each breacher squad you run.

A good choice for a support officer would be librarians, legion champions, forge lord or a siege breaker.
Librarians are amazing in their ability to buff the breacher squad they are in. Any one of the psychic disciplines is handy. Divination or telepathy are brilliant powers for supporting the squad, ensuring they get to their objective with the minimum of fuss. Pyromancy and especially Biomancy are great disciplines to couple with the Imperial Fists special rule in challenges to turn the librarian into a character killing powerhouse.

The next layer of support you want for the army will be the armour and big guns. Pretty much any choice here will be fitting in aiding the breachers get to and hold objectives. Personally i prefer rapiers and dreadnoughts but Vindicators, Sicarians or Heavy Support squads will easily do the job. If you can fit the points, putting nuncio vox's in your breacher squads couples very well with an artillery squadron or quad gun battery. Medusa siege guns have a very imposing albeit short ranged threat bubble. They have the capacity to destroy anything in their range and are a good reliable threat neutraliser for the breachers. Basilisks are a great secondary option. Brilliant for destroying infantry, they however lack in tank busting and heavy infantry killing power to the Medusa. mixing the artillery unit however (1 Basilisk and 1 Medusa) gives you the benefits of both.

Having a mobile reserve is also handy. Terminators in a landraider or tactical support squads in rhinos..Both are scoring and can provide potent firepower in the right place. For larger games a Storm Eagle or other flyer provides great support, taking the immediate threat from the scoring breachers not to add to the considerable tank busting ability. Effectively, the support elements need to neutralize the enemies elements that can easily counter and eliminate your breachers, leaving them free to handle enemy infantry and objectives.
Bear in mind that your breachers will be in effect of +1T, +1BS (with their bolters) and carry a 5++/6++ and defensive grenades. They will be more than a match for almost anything but the most hardest of infantry or specialist units.

Breachers can be a sure, but slow way of grinding across the table and securing objectives. The key to ensuring that and bringing honour to the VIIth legion is to minimize the pain they have to endure getting there. Typically that will come from enemy heavy fire so you have to use your heavy fire to neutralise theirs.

Its best to keep your breacher units close together so as to compliment each others fire power and allow your support characters to move where needed though be wary of enemy artillery as that will be the surest way to kill your breacher units.

Breachers are slow in order to maintain the +1T benefits of the Rite of War but in standard games on standard tables you'll find they reach the action turn 2. There is also no need to feel you HAVE to charge the enemy. Let them charge you. Also because your troops are slower moving, watch out for enemy troops which can outmanoeuvre you and bog you down before you get to your objectives. Identify them and take them out or at least weaken them to the point that if they charge a breacher squad, you can end them in a single turn and keep on moving.