So, Macca here with the exciting start of a new project: The Tormentor, personal transport of the Primarch Perturabo. Rules wise, I had to contact Forge World in order to get the full details. Basically, it's a Shadowsword with a single access point at the rear, with a single Titan void-shield and the command tank upgrade. It costs 500 points, but can be upgraded as per a regular legion Shadowsword.... not the slightly better Solar Auxilia one. What does this mean? Well, people may put up to two pairs of sponsons on it. Brutal.

When I started this project, I knew a couple of people planning their own. I gave a few ideas to a mate on how I was doing the door, and he went on to make his own tank. Once he had built his, I used it as an idea generating platform. I looked at it, and decided that I would be very by-the book, and I thought I would treat it like a WW2 Jagd-tiger tank killer. This tank is a practical design, it needed towing cables, entrenching equipment, dozer blades, pintle weapons, fuel jerries and stowage.

Further to this, reading Angel Exterminatus gave me some ideas on the load-out. I know it has lascannons, heavy bolters and a hunter killer. It's also very plainly adorned, unlike other Primarch Transports, meaning that I will keep the iconography to a minimum. After all, when this tank is blown up, Perturabo will just make another. Very practical kinda guy. 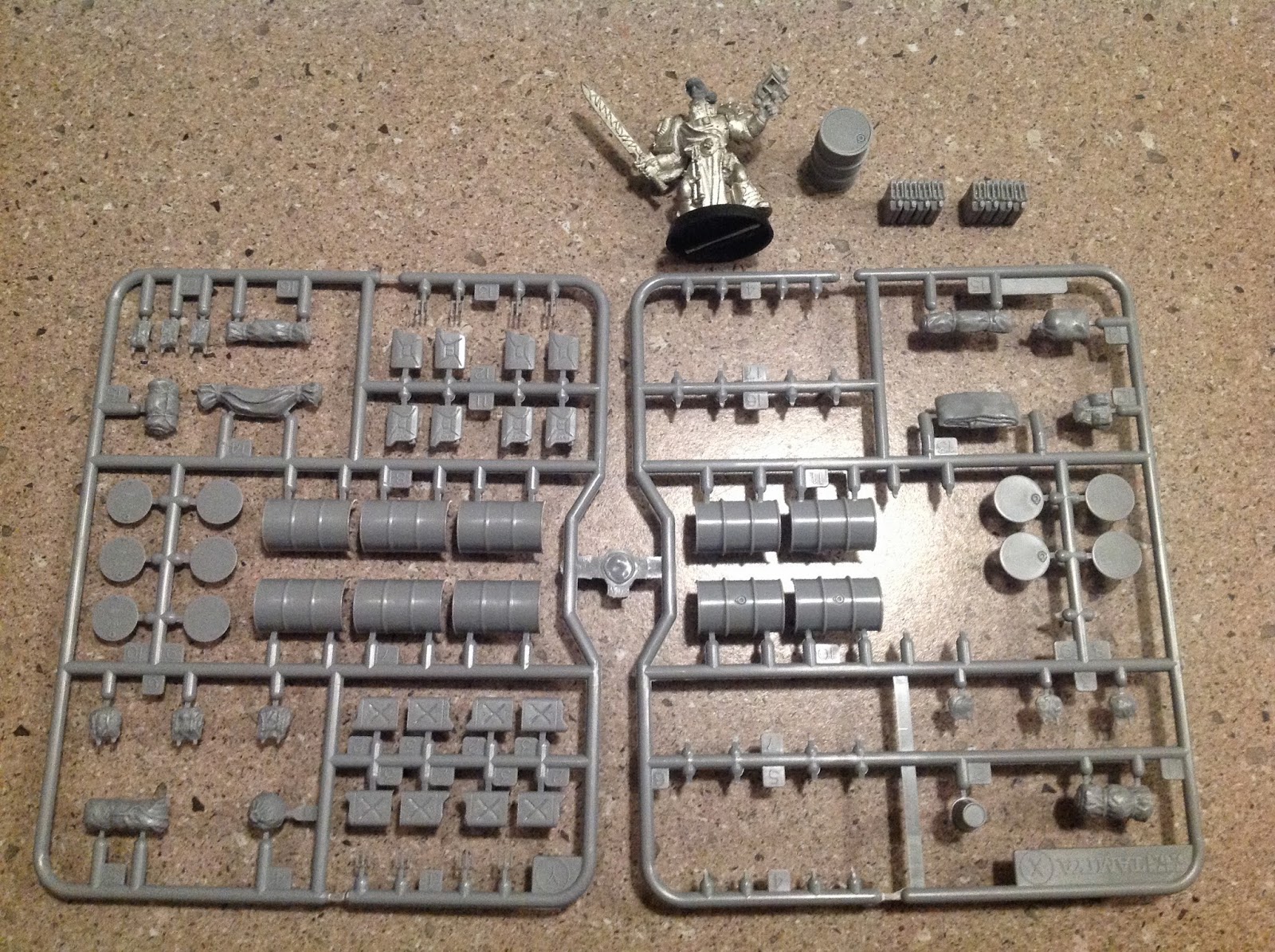 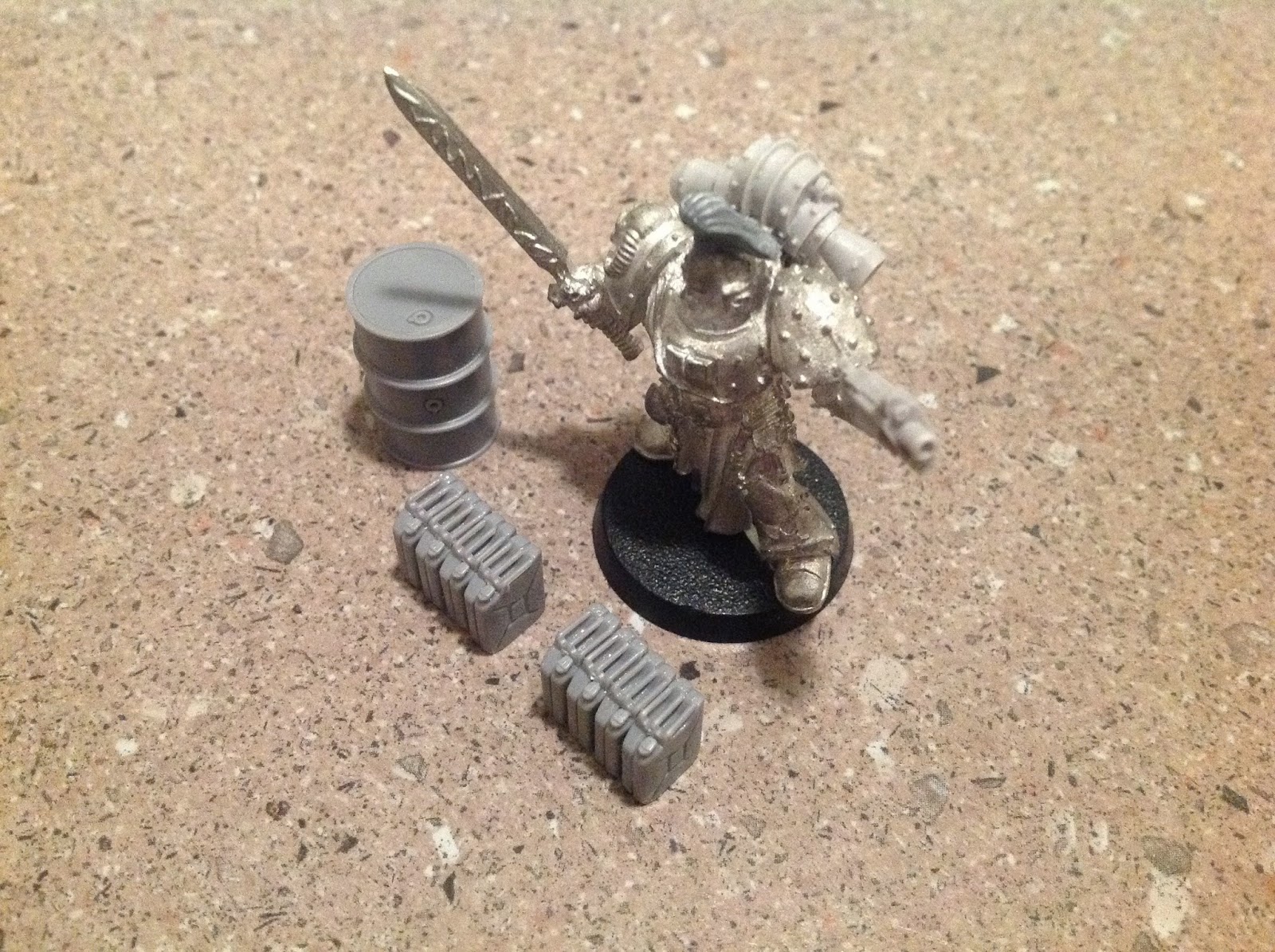 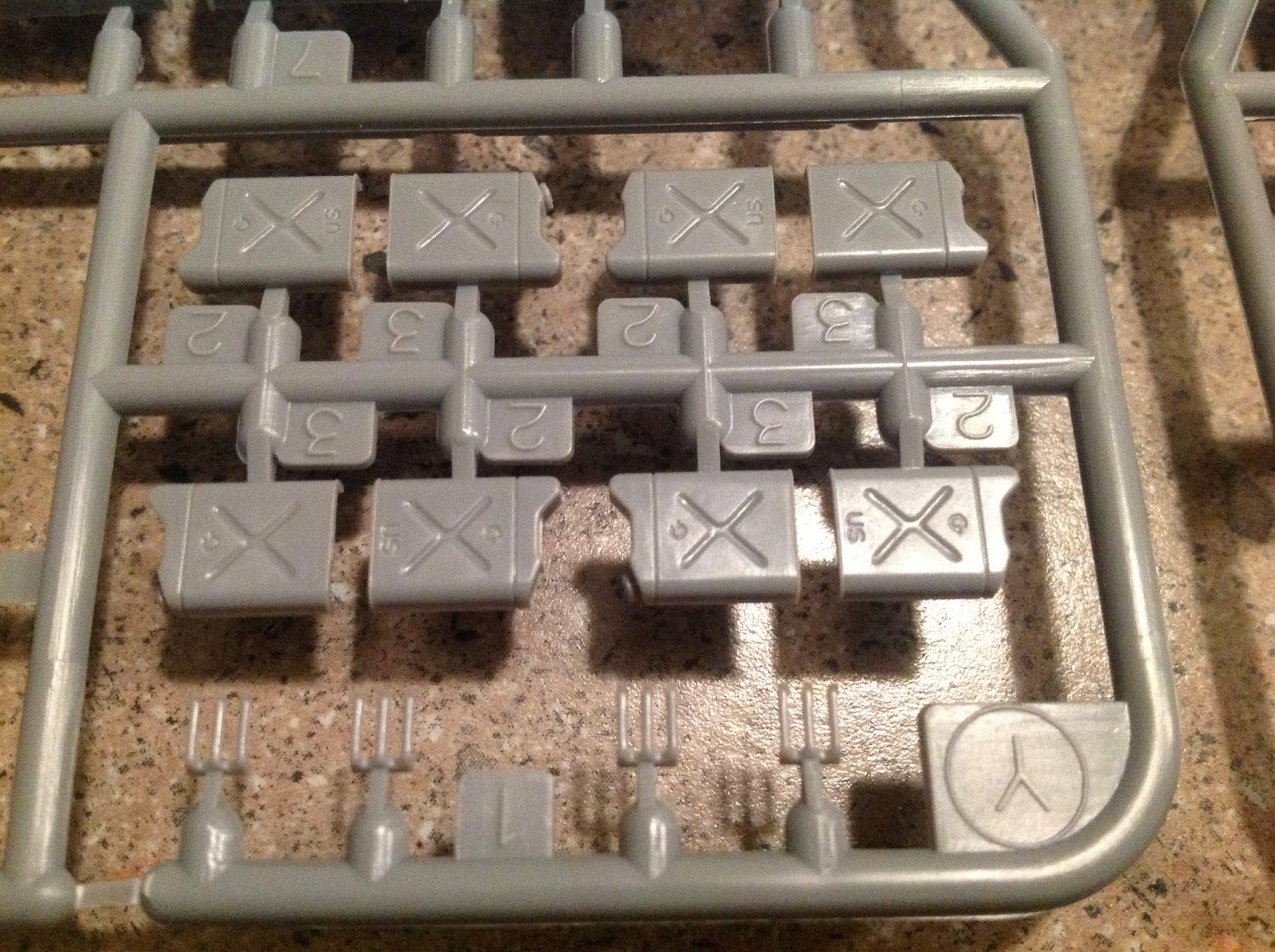 The 1:48 scale Tamiya jerry cans are fantastic. They even have the little handles! 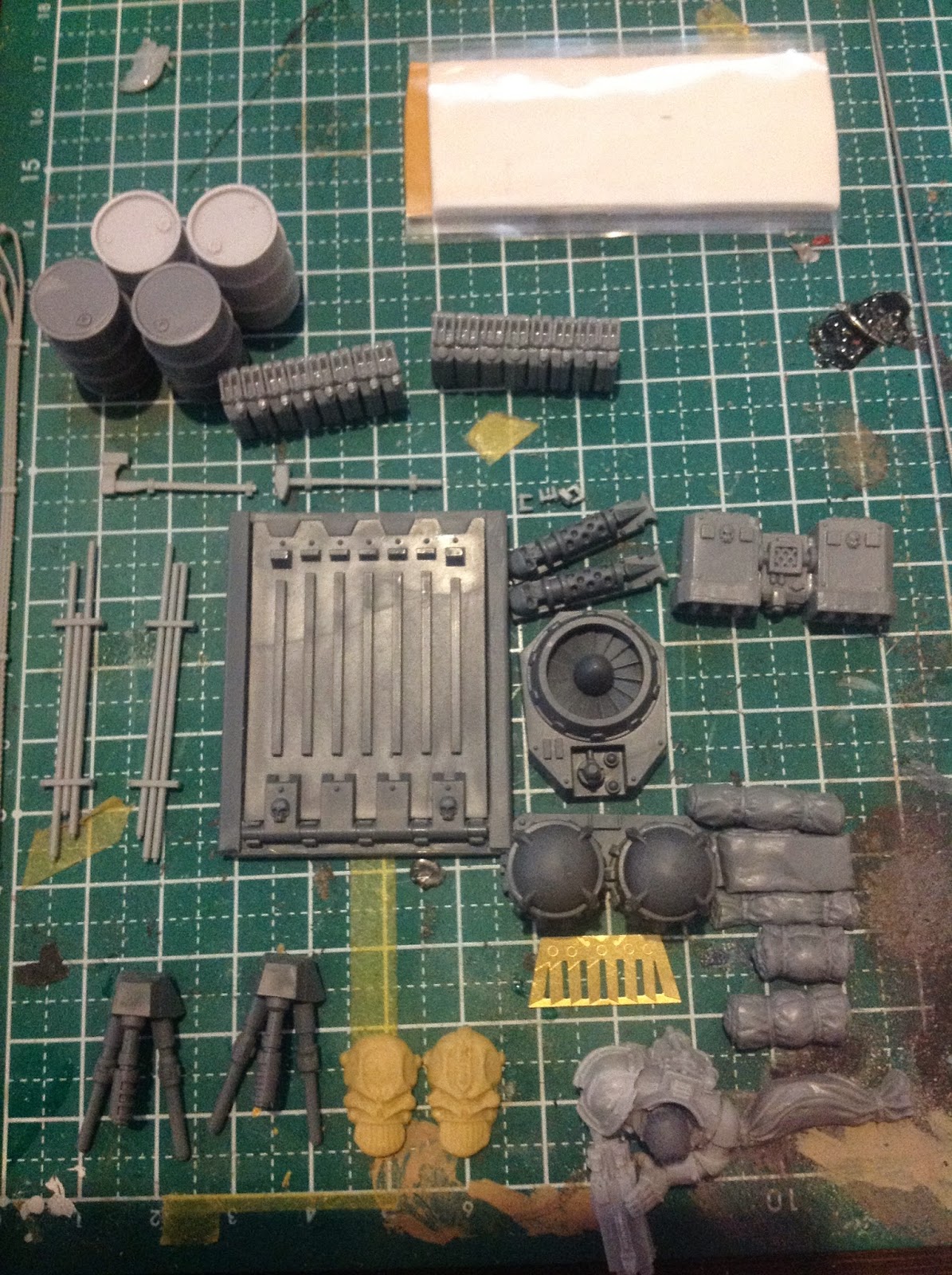 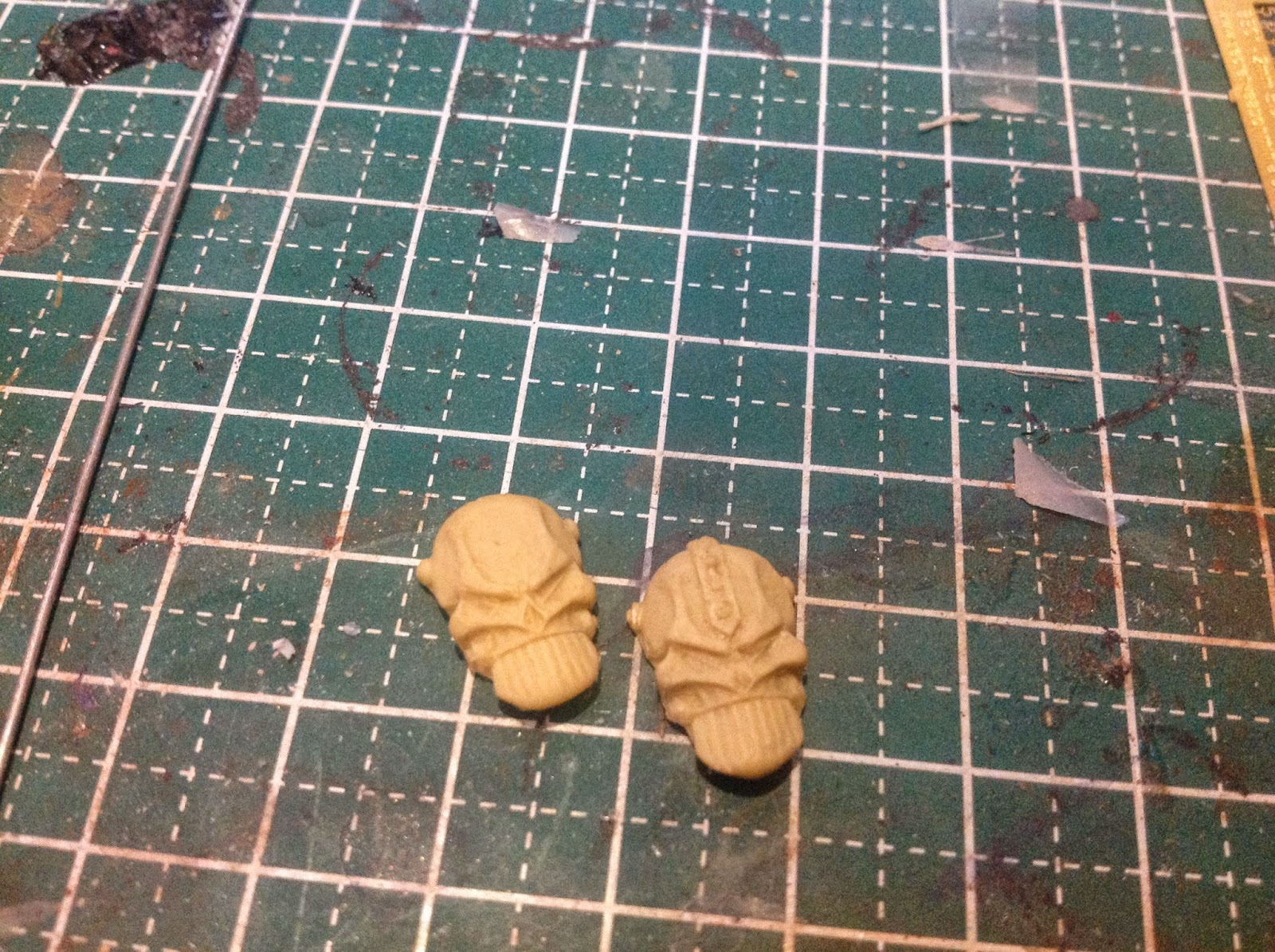 I also sculpted up some Iron Warriors emblems, as similar as I could to the ones to the 40k chaos upgrade kits from FW. I couldn't decide which I wanted to use... so I used both. Fuck it. 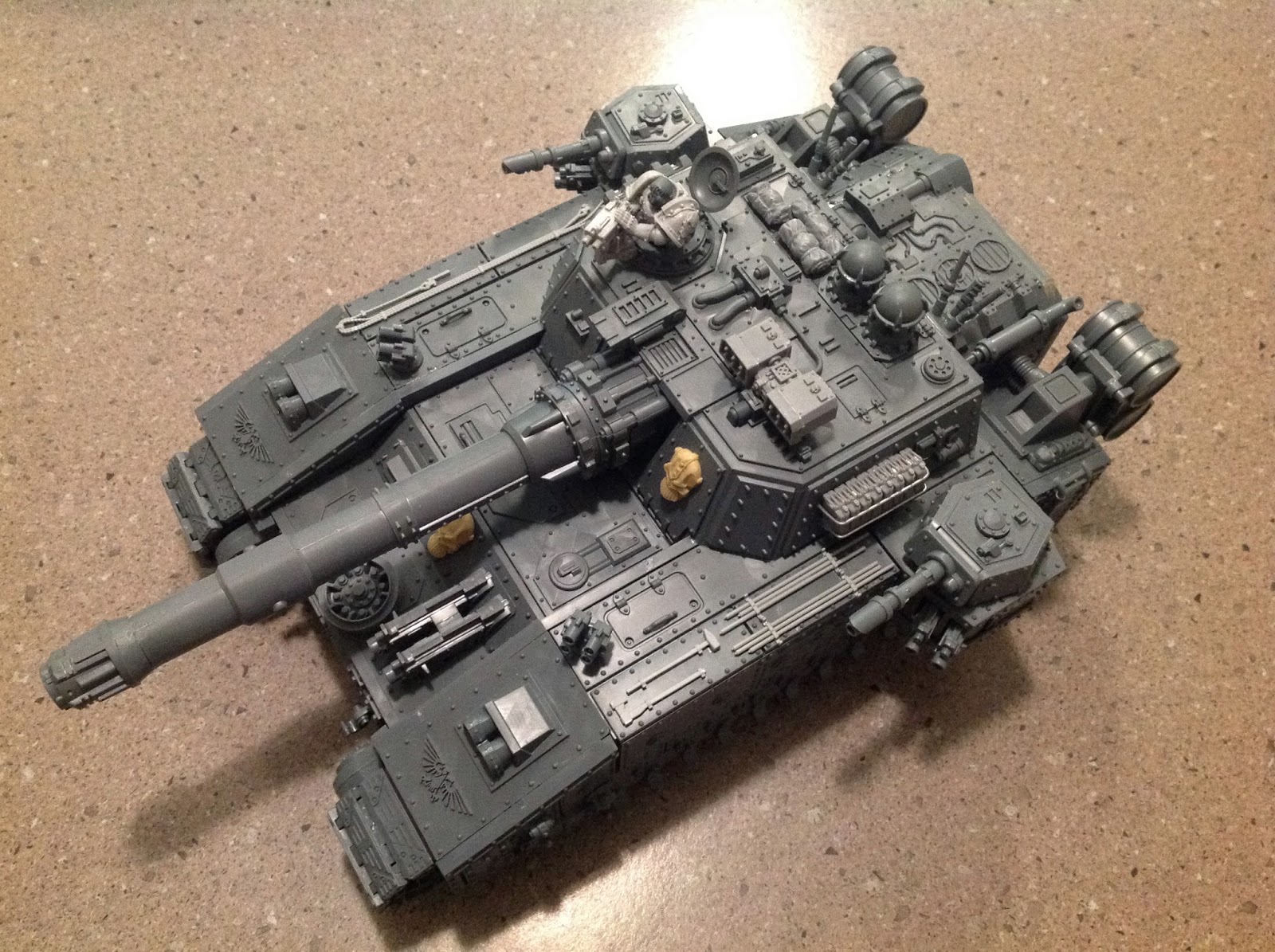 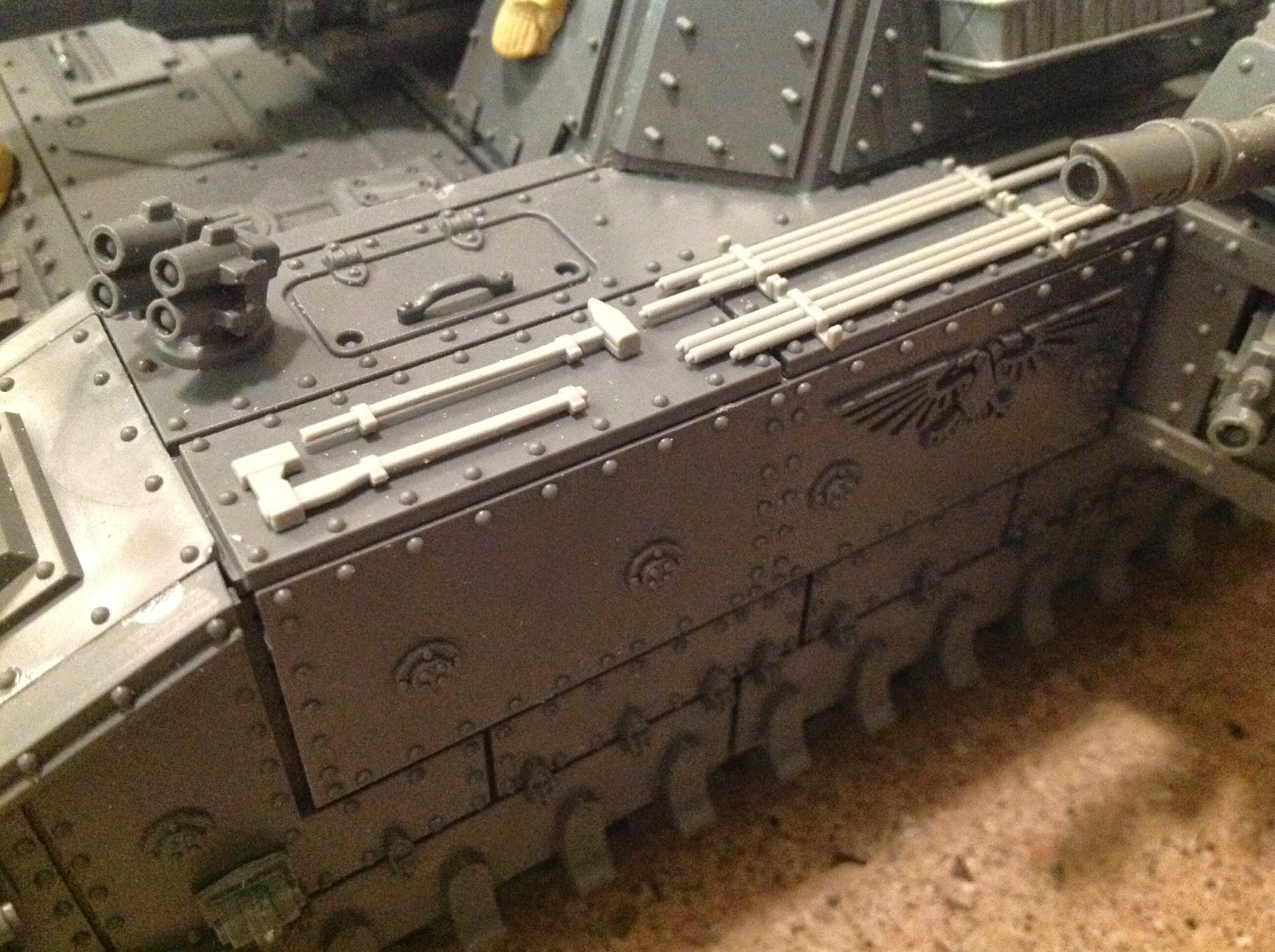 I couldn't resist  adding all these extra bits. I approached this tank like a WWII tank, right down to the tooling and recovery cables. 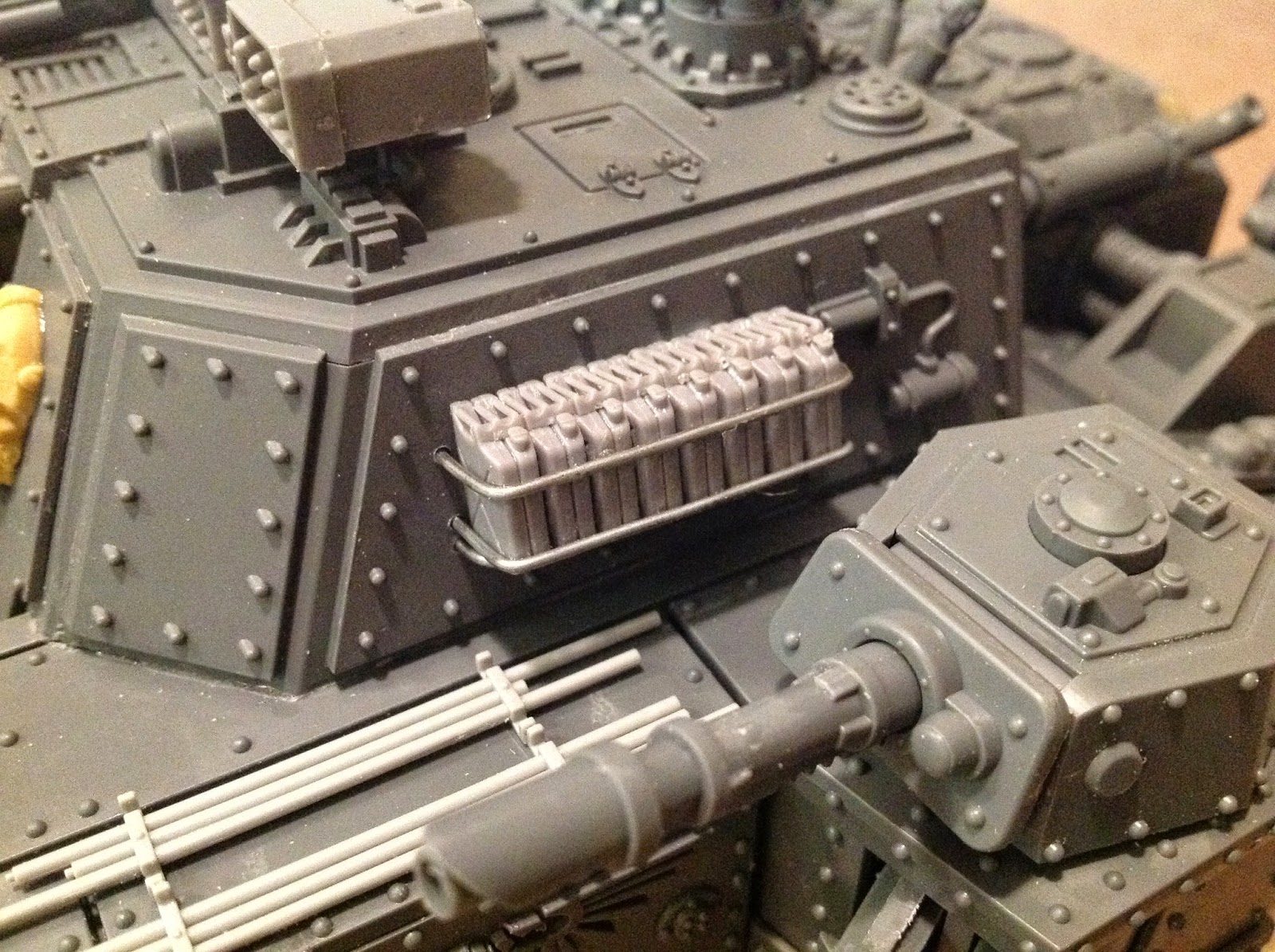 I also built a custom storage rack for the Tamiya Jerry Cans, again, like a realistic model tank. 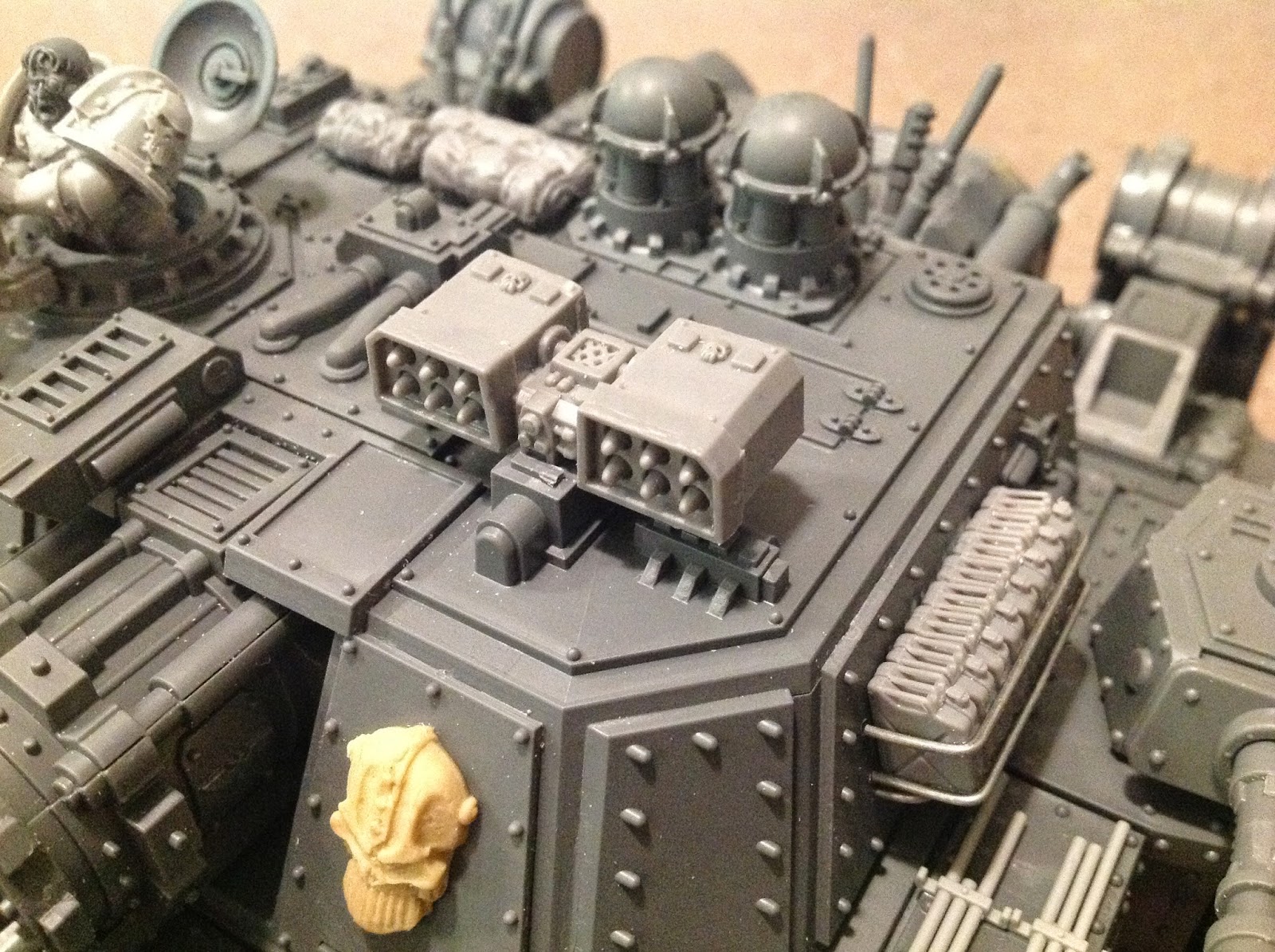 Hunter Killer? Havoc? I am not sure, but I think the low sleek look looks better then either of those actual kits. 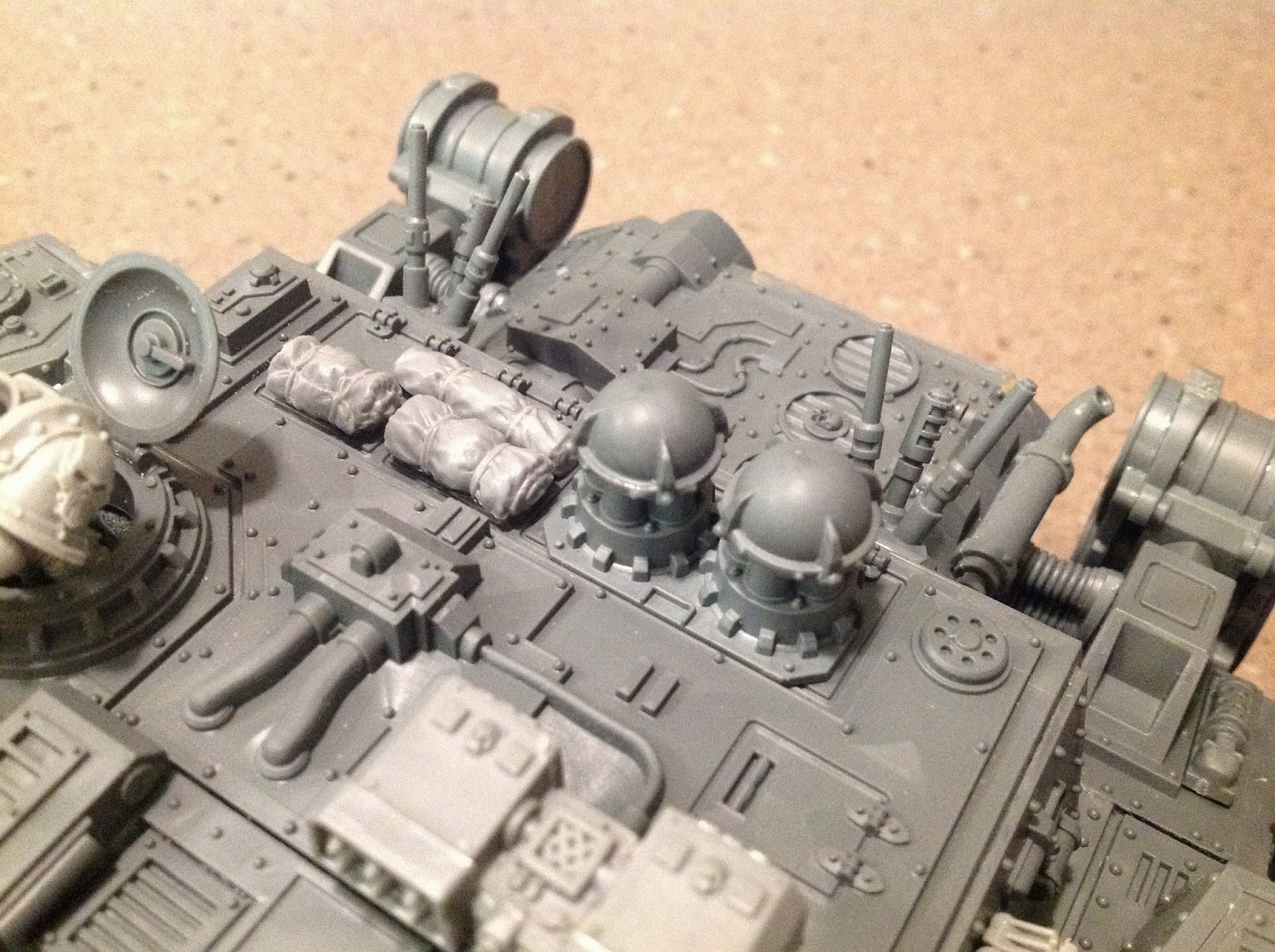 The Void Shield array. This was an interesting part to build. I looked at the 40k void-shield kit (the one that sold on eBay for about 10x the cost) for inspiration.

As a command tank, I decided some high powered, small antennae would look the bomb. Also,  stowage was added to further accentuate the WWII feel. 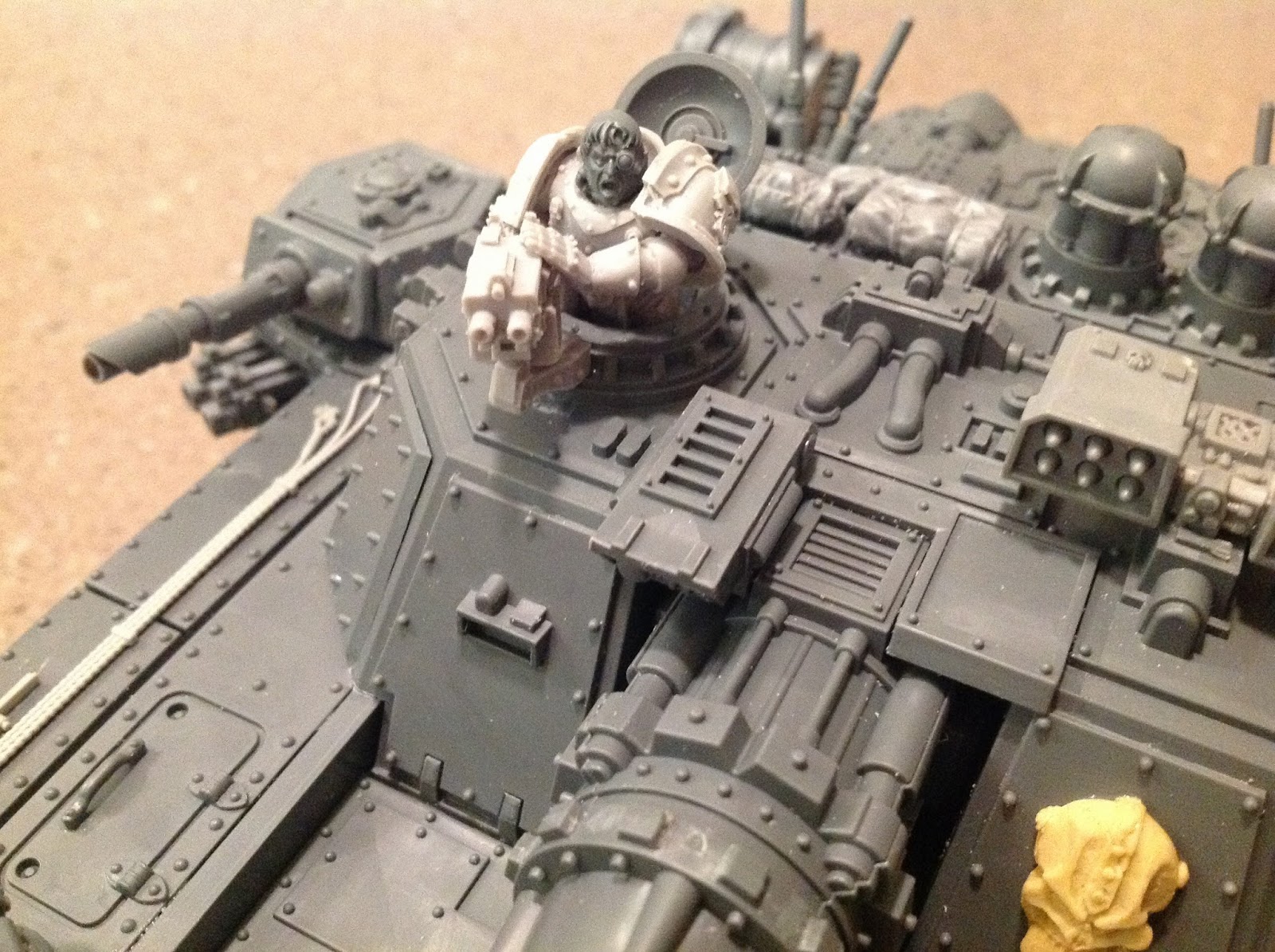 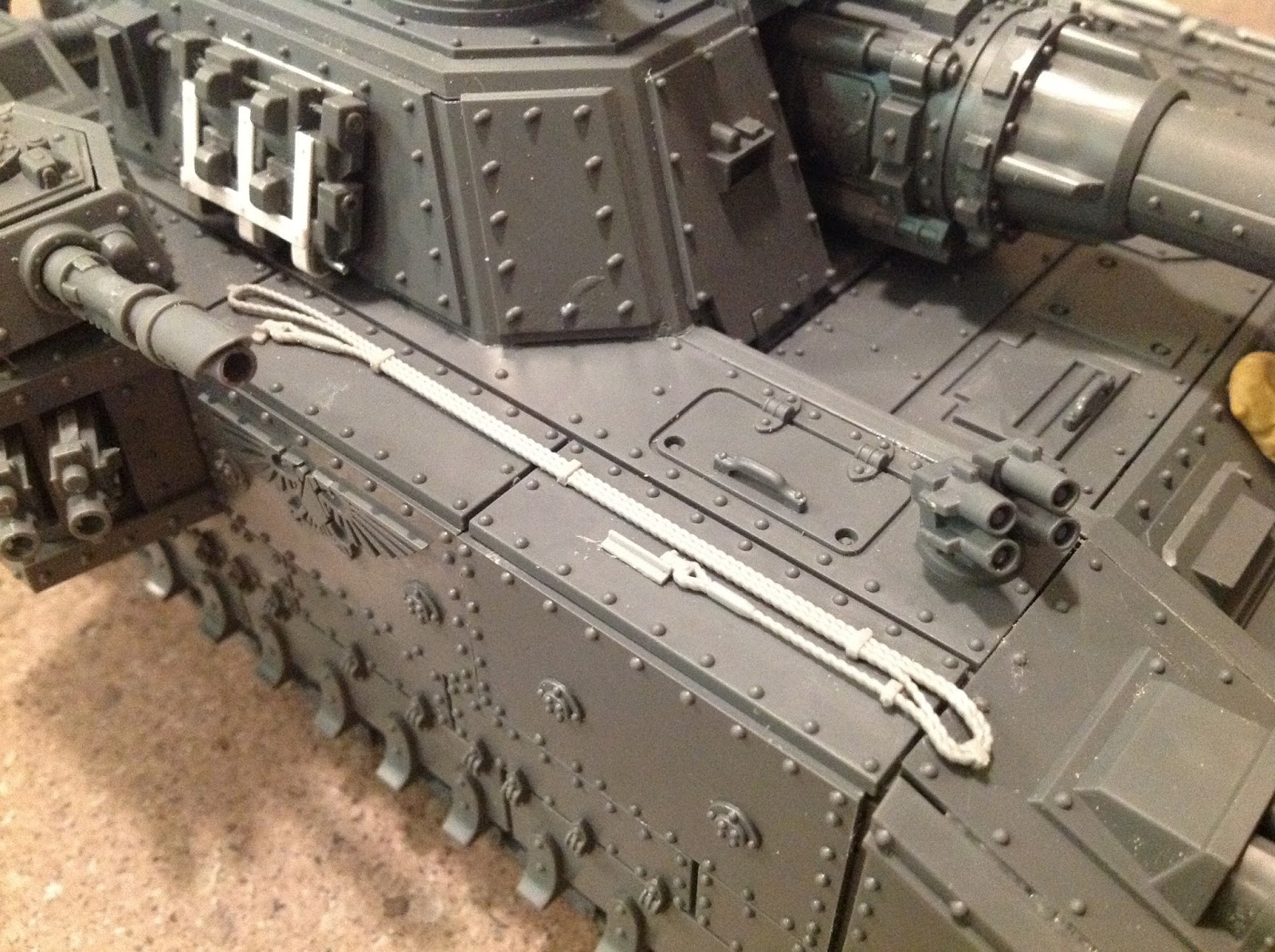 The tow cable and tracks attached to the hull are both WWII ideas. But I like the look of it. 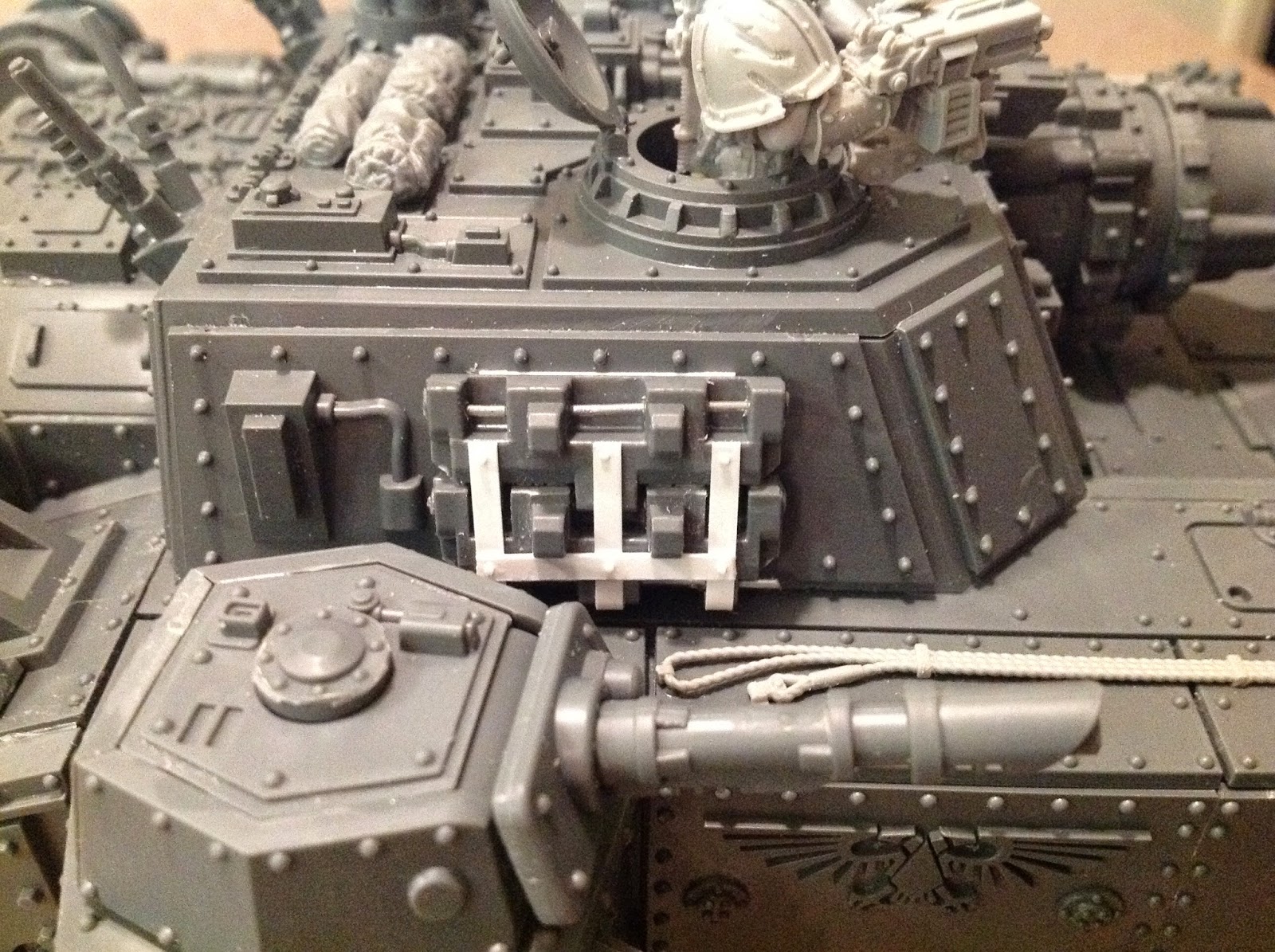 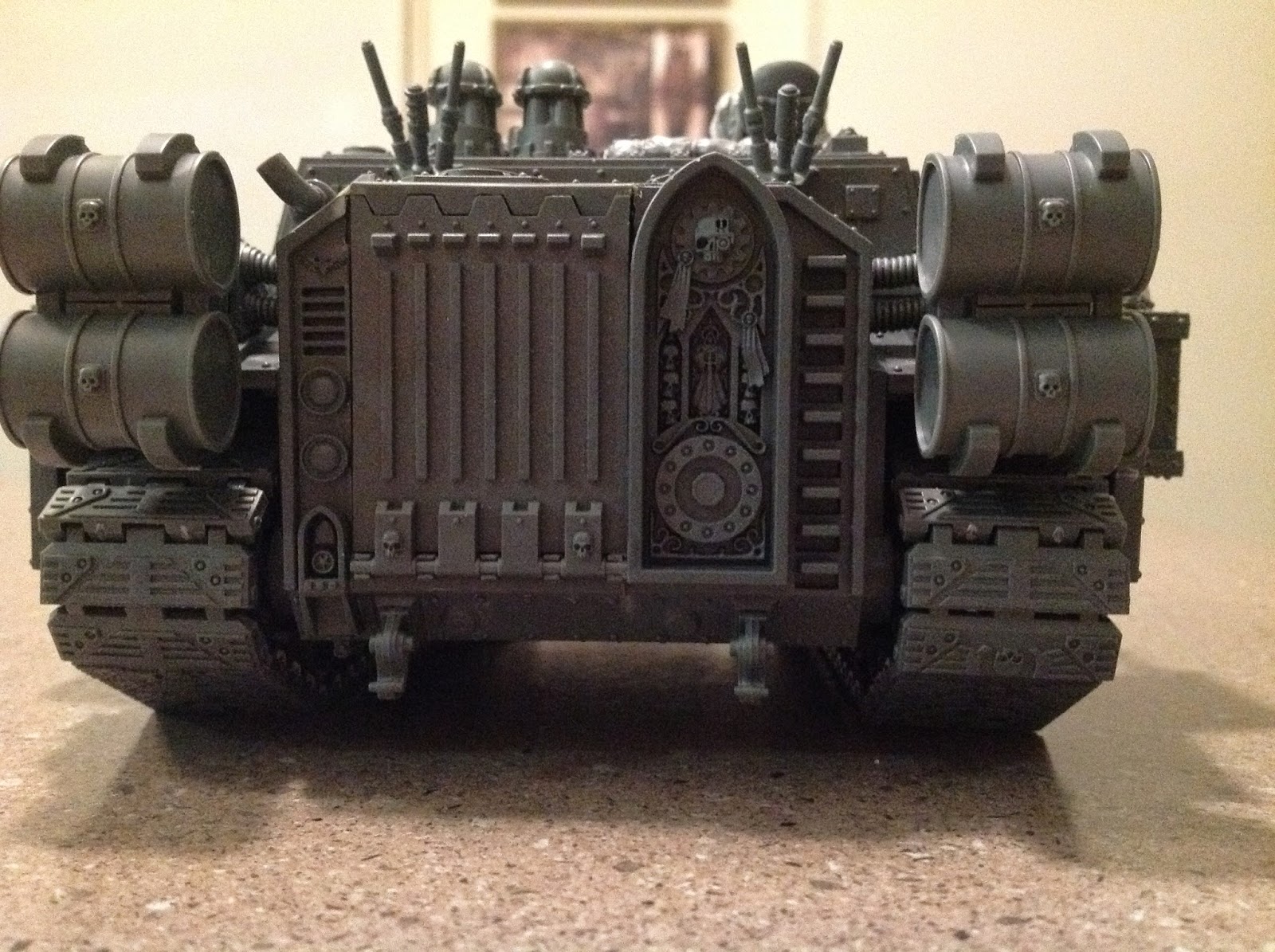 Finally, to finish off the vehicle, I added the defining feature of a Super-Heavy Transport: The Ramp. The ramp was an interesting concept. I spent quite a while trying to figure out the dynamics of how the exhaust would work once I cut it away, but I decided that the entire right side was where the power plant is, and that the exhaust (now to the top-left of the door) curved over and above the ramp. In the end, I think I pulled it off.

Well, that's all for now, keep an eye out for a paint job soon,