Setting up a battlefield for 7th Edition.

Today, we are going to look at setting up a gaming table in 7th edition. The post is a little bit wordy, but I have added a bunch of home graphics to demonstrate the points I am making along the way. This is actually really simple, but often seems more difficult then it appears thanks to inept set up. I think we have all had horrible games against Tau and Eldar players on near-open tables. So, lets go through my process step by step.

The types of terrain:

We have multiple terrain types, some of which overlap.

So, basically, a lot of options here. I like to break down most cover into the amount of area it covers, and the general theme of a table.

Games Workshop itself defines the battlefield as: "The battlefield is usually a flat surface on which scenery models are placed and over which the armies fight. The battlefield can be of any size from 2' by 2' upwards. We recommend that it not be more than 6’ wide at any point, as tables that are wider than this can limit the ability of players to reach models in the centre of the battlefield. Battlefields are most often rectangular in shape, but can be square, round, L-shaped, or whatever other configuration is agreed upon. A Realm of Battle board makes an excellent battlefield, but a typical dining table will suffice. The battlefield is considered to be ‘open ground’ for all rules purposes. A unit cannot voluntarily move or be placed beyond the table edge unless it, or the mission you are
playing, has rules that specifically say it can choose to leave the battlefield."

So, basically, it can be any shape and is open until you put terrain on it, and you can't leave it. Cool. Lets use this as the basis of our 'Digital Table'.

Notice how I didn't pick an L-shaped table... 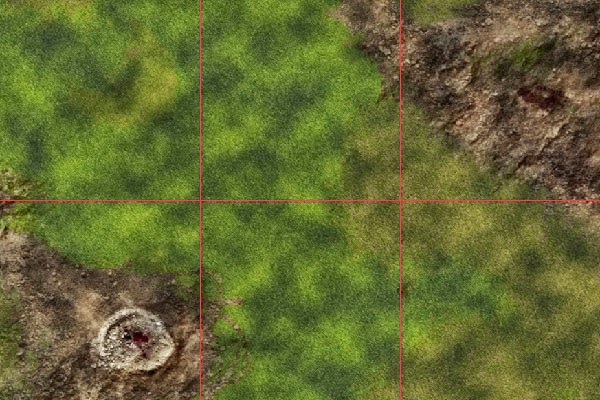 Here we have the table, a 6' by 4' table. Seeing as it's a grassy table, I think that a 'Woodland Theme' is the way to go. So, with the advent of 7th Ed, the old 6th ed System of placing terrain is gone and has been replaced by the new 'do whatever you like' system, which I am sure will generate some great arguments between Tau and Nid players in 40k. Today we are going to avoid this problem by keeping it simple and following a few principles.

We want to have a few objects placed centrally which block Line of Sight (LOS, get used to it, I use this a lot through the article). These can be anything from dense woods to rocky outcrops. The idea behind large LOS blocking objects is that we don't want someone to place their ranged firepower in such a way that they can completely dominate the battle with little effort. Sometimes, this is unavoidable, but generally, a few big objects will do the trick. Here we have something which is ideal, you can see the scale of it, so lets place it on our board. I am going to use three of these. 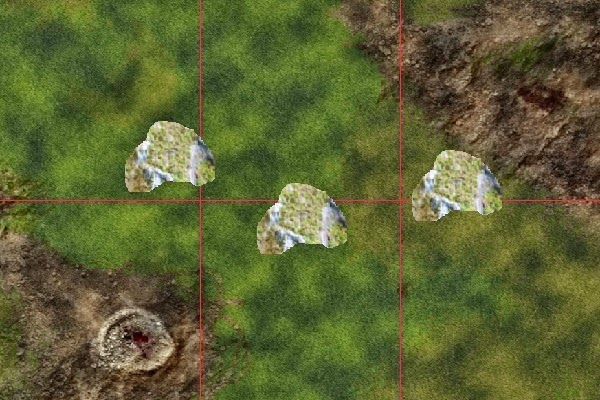 This is stuff like forests, rocks, maybe a few barricades. We want to further block Line of Sight using these, but not to such a degree that you cannot see through it. This is important as it stops a lot of the mid-range firepower which causes the majority of damage. The last thing you want is to emerge from cover in your turn one only to be decimated in the open. This terrain gives you a fighting chance. 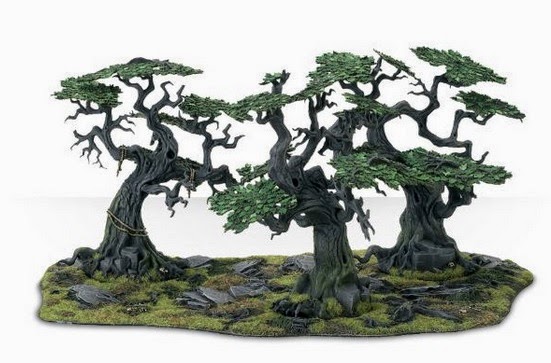 Now, lets place these on our board. As you can see, there are more of them, and these take up that little bit more room, restricting Line of Sight a little bit more. 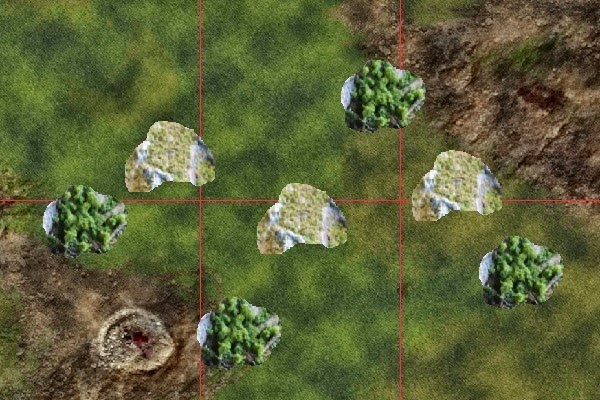 This is just things like barricades, more open woods and craters. This sort of terrain offers very little cover, but it helps to close up large open areas. I find it quite fun as players who end up in each others territory can use it to their advantage, such as forcing enemies to charge through difficult terrain to reach them. 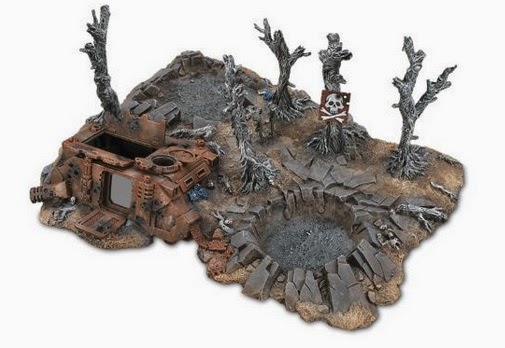 With this added, we now have a fully set up Digital Table. 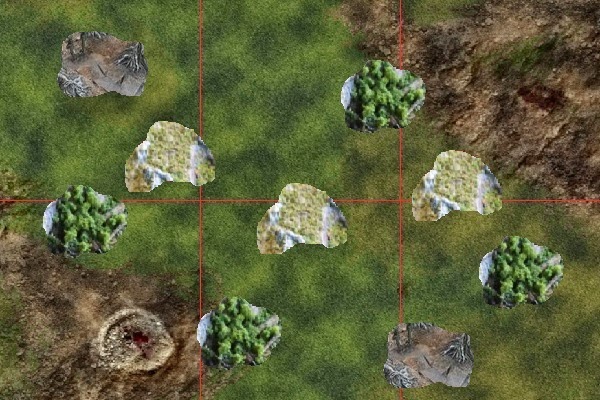 Ideally, we are keeping 1-3 terrain pieces per 2'x2' section, not including overlap. As this is a woodland table, I have chosen not to use barricades, however these could be used to add a few more bits of cover in the larger patches. We now have a combination of: 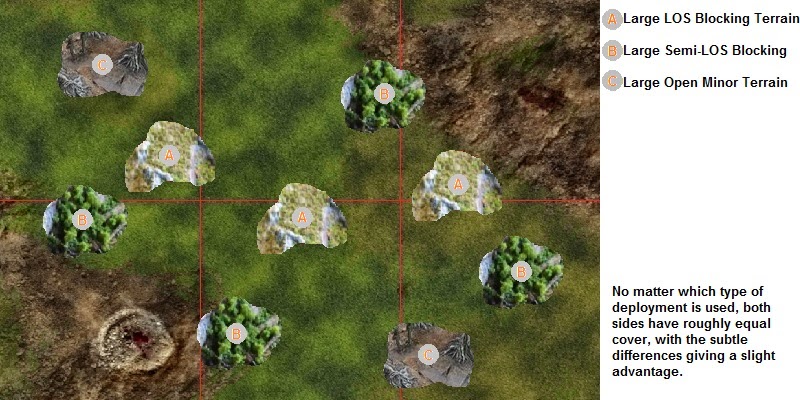 As you can see, the final design suits all three main deployment types, Dawn of War, Hammer and Anvil and Vanguard, as the terrain is not weighted in any one direction. I have seen tables that look like Omaha Beach from the start of Saving Private Ryan, nobody wants to be in open ground whilst the other guy gets to deploy in a fortified bunker complex do they?

A further point of note with this type of table is that it leaves plenty of areas where fortifications may be set up, if they have been purchased by either side. The large LOS blocking terrain will still effectively hamper most fortifications, with units placed on top of the Fortress of Redemption or the Bastion possibly able to draw LOS, but the vast majority of units will not.

Here is an example of a gaming setup that Cat and I were using in late 6th. Note that the terrain is not weighted overly to any one side, with 3 large structures all located in the centre of the table, and only a single large structure at one end, balanced out by multiple barricades at the other end of the table. (Note the craters placed to denote blown up vehicles, something 7th has decided to dump. I kinda miss this.) 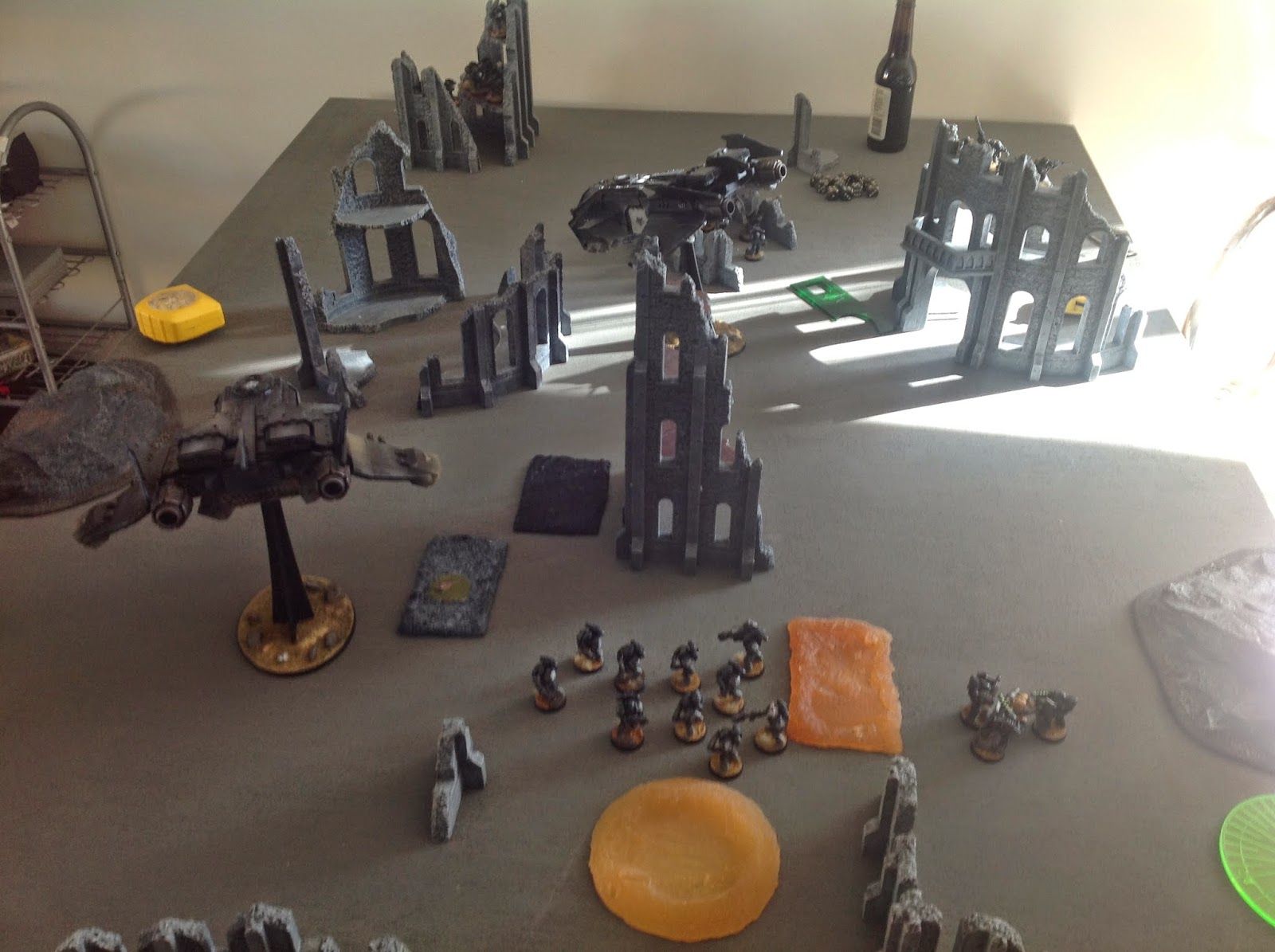 This is a simple example of a gaming table, and I just pulled it from one of my picture folders for demonstration purposes. You don't need a lot to make a nice gaming table, just a painted 6'x4' board, and a few bits of painted terrain and you can do amazing things. We will of course go into building the actual terrain for tables from start to finish in later articles.

Well, that's it for now, my state-of-the-art paint based graphics have hopefully demonstrated the basics, and we WILL expand upon this in future articles. Until next time,

Email ThisBlogThis!Share to TwitterShare to FacebookShare to Pinterest
Labels: 30k, Gaming, How To:, Terrain