Is Games Workshop out of touch? Um, I guess this is part 3?

So I stumbled across an article on BOLS last week, find it here. Jervis has a bit of a gentleman's rant, which I'm all for, however I find his view incredibly one-sided for someone who wields so much power over the system. Anyway, long story short, I think the contents and discussion within merits a deeper thought than what was presented.

The key points I want to address (lifted from the article) are as follows:

"Here is a summation of the points he makes against tournament players in case you didn’t read it all:
— Tournament gamers only “play to win” and are WAAC
— Tournament gaming and tournaments “destroy what the hobby is really all about”
— Tournament gaming is directly opposed to painting (LOL)
— Tournament style gaming is unimaginative
Here’s how Jervis thinks the game should be played:
— Scenario based games and campaigns are the pinnacle of the hobby
— Scenario and campaign games have no need for point values or pre-set win conditions
— Points and even match-ups are the cause and death of “casual play” and scenario and campaign based gaming for the wider community"

(I will add a note here, the piece written by Jervis is a decade old. It's not a current document, however it's the best peek into the mind of their key developer. His attitude may have changed over time, but given the direction the game has taken, and how little communication we actually get out of GW, this is the best representation of their attitude I can find.)
— Tournament gamers only “play to win” and are WAAC

No, not in Australia. No, that's not true, it's less WAAC here but I would say it really just applies to certain people as opposed to the whole scene. There are a lot of players who are running narrative lists and who win Tournaments. They don't have to be mutually exclusive. Spraggy, Keepy even myself, have all won tournaments with lists that were as fluffy as they were tough.

Um.... no? I love nothing more at a tournament than spending as much time as possible discussing models, rules, fluff etc with other hobbyists, all whilst looking at well painted armies. I know in 30K especially that we area community that thrives on 'rule of cool'. You see forces all the time with converted units EVERYWHERE. People like to go above and beyond, I find.

As above, I find that most armies are excellently built and painted. There are holdouts, but, honestly, the majority take a lot of pride in their armies. Even players who aren't great painters at least jump in and give it a go. Good on them too, it's the only way to improve!

Try playing a Horus Heresy mission sometime, when you start in a city full of objectives and the buildings start collapsing onto your units as they try and capture them. True story. Book I will tell you all you need to know on that...

— Scenario based games and campaigns are the pinnacle of the hobbySounds like forcing his style onto others. I agree with it, mostly, I myself like to play narrative games, but the narrative should stem from interesting and well developed missions available in the game, or even missions that the players themselves come up with. That said, it is not the pinnacle, some people honestly do enjoy a simple 'kill them all' approach. We call them World Eaters players. 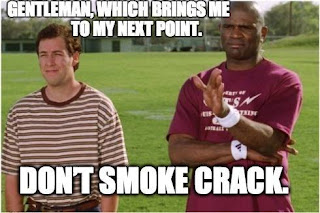 What did I just read? Ok, so, you're playing a campaign and, I dunno, Horus decides to start a Heresy of some kind and he is fighting across the stars. He is a valuable asset should you chose to field him in your campaign, but the counter is, if you use him, and he dies, you lose, so you have to be selective.

According to Jervis, that's just silly. Apparently I'm not forging a narrative with that...

Not only that, lets just go full on GW, Lord of War limits? Nah, lets rock up with half a dozen super heavies, that's a waaaaaay better approach to forging the narrative.

Why can't even match ups occur? I hate a lack of balance, because when I play, I want to test my generalship against the other player. If he or I rocks up with a list that is far superior, it kinda takes the fun out of it for me. You're either clubbing a baby seal, or you yourself is getting clubbed. It can be fun, but usually it only works with some kind of balancing mechanic. Problem is, you need a rough starting point to make the lists from, and you cannot do that (with any level of ease) without points. Without some guiding force, you end up with silly combinations, it's that simple. 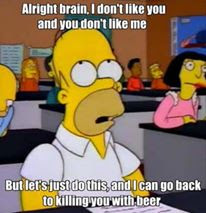 Why does this worry me, and why should YOU be worried?

Well, in simple terms, Jervis heads up the department writing rules and codexes. This guy can turn around at the near-drop of a hat and re-engineer 40k into Age of Sigmar. If this happens, 30k as we know it will cease to exist. What we need is honestly an injection of sanity or player feedback into GW headquarters. I'd put my hand up, but I have good ideas (mostly), and I know I'd never make it through the doors at Nottingham. (Ok, I'd probably stumble into a bar somewhere near the airport and that would be my trip over) Jervis' record of writing codexes is also something I would like to point out, as the man single handedly destroyed the 3.5 Chaos Dex, not just toning it down, but removing all the flavour from it and turning Chaos Space Marines ever since into Codex: Red Corsairs. For a person who believes in narrative play and fluff, he took a big dump on one of the most beloved dexes of all time in both the crunch and fluff.

Jervis, please, if you're reading this (ok, I know you're not, I pay out on GW waaaaay to much to have many, if any, readers who work there) just keep the game as it is, try to tone a few things down, change a few existing rules and let the players play the game how they deem fit.

Yes, we can always take a person out of context. We can overhype and exaggerate a certain comment to the extremes. We can misinterpret the intent and dwell on the wrong words. Yet somehow, I really believe this is the mindset at GW, because nothing they have done in the last 15 years suggests otherwise to me. What do you think?