Keepy here again with the latest instalment of my favourite traitor legion, The Sons of Horus. This post is mainly for the audience who are considering jumping over to 30k and have never worked with resin before, and focuses on the preparation stages required to assemble and paint models from Forgeworld and other manufacturers. More seasoned hobbyists who are familiar with these processes won't get much out of this, but if you want to brush up on your skills then read on.

The main unit we are going to focus on are my Justaerin Terminators, but during the build most of the my Cataphractii pattern Terminators were assembled as well so they might as well be included in this first WIP. It is also a bit of a catch up post as these were all assembled at the same time as Abaddon.

Justaerin Terminators - Yet another great kit from Forgeworld! Once again there is a lot of good detail in these, however the mould lines were no where near as good as the Abaddon vs Loken models. Lots and lots of filing and scraping with the hobby knife just the get these looking right - which is hard considering nearly every plate has metal studs or spikes on it.﻿ 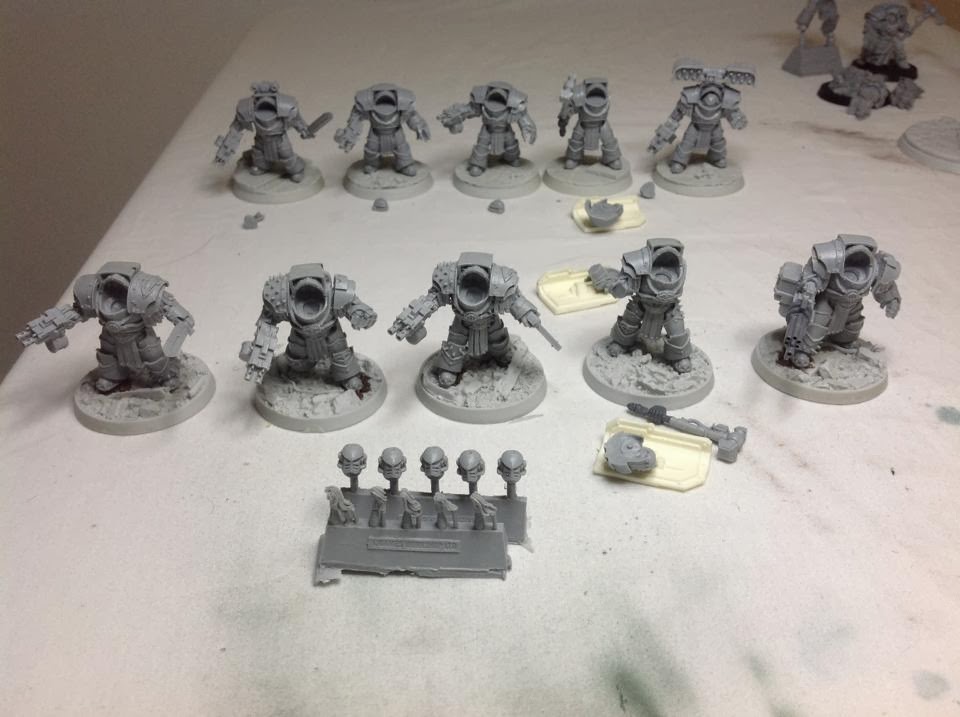 Before you judge me for the load outs, this army was conceived during the initial release of the Dark Angels codex for 40k. It was originally designed to play in both 30k and 40k to give it some sort of usability over multiple gaming systems. So for all those purists out there  - I know, they are not load outs for 30k models. They are, however, magnetised so a win if you have the parts available for multiple weapon load outs.

A quick word on safety - Inhaling resin filings or dust if very harmful to the human body - you may not experience the effects straight away but prolonged or heavy exposure to the chemicals inside airborne resin can lead to emphysema. I'm not sure about you but I don't particularly want that so make sure you wear a dust mask if filing or using a rotary tool such as a dremel to sand back the flash on resin models.

The other important thing to know about working with resin is that your glue used for plastics kits will not work. Resin models require superglue to be joined together - and some pinning may be required on parts that are vulnerable to knocking - read Thunderhammers.

Assembly is fairly straight forward after the clean up. Forgeworld stuff mostly comes marked with dots that match up to torsos so it is hard to accidentally mix up the parts. I mounted and test fitted the models onto the bases I had planned on using (see Justaerin Basing post - coming soon) and then pinned the main components and any smaller ones that would be likely to break. Bits like the thunderhammers - these come for the left hands on Heresy models but 40k ones are on the right if you want a storm shield. So  some Deathwing Knights hands were acquired and crafted to fit the resin thunderhammers. I used a very narrow gauge wire (0.38mm) to pin the parts together and then to the model. The wire was so thin I was able to pin the topknots to the Justaerin's helmets with relative ease. I managed to get some custom made Stormshields from John at The Painting Bunker to finish the TH/SS config. 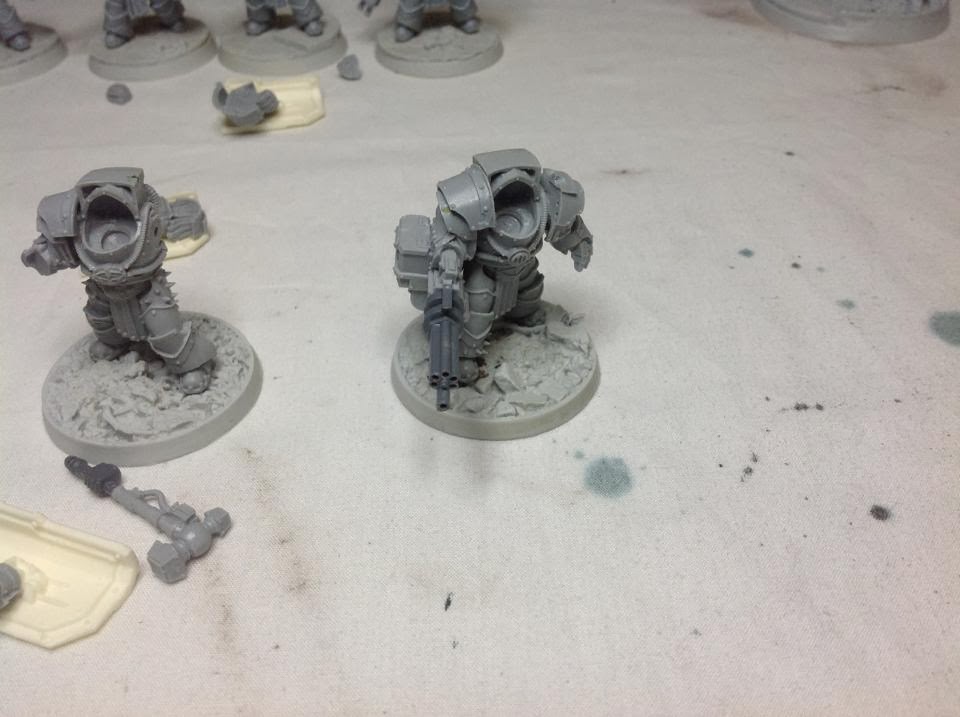 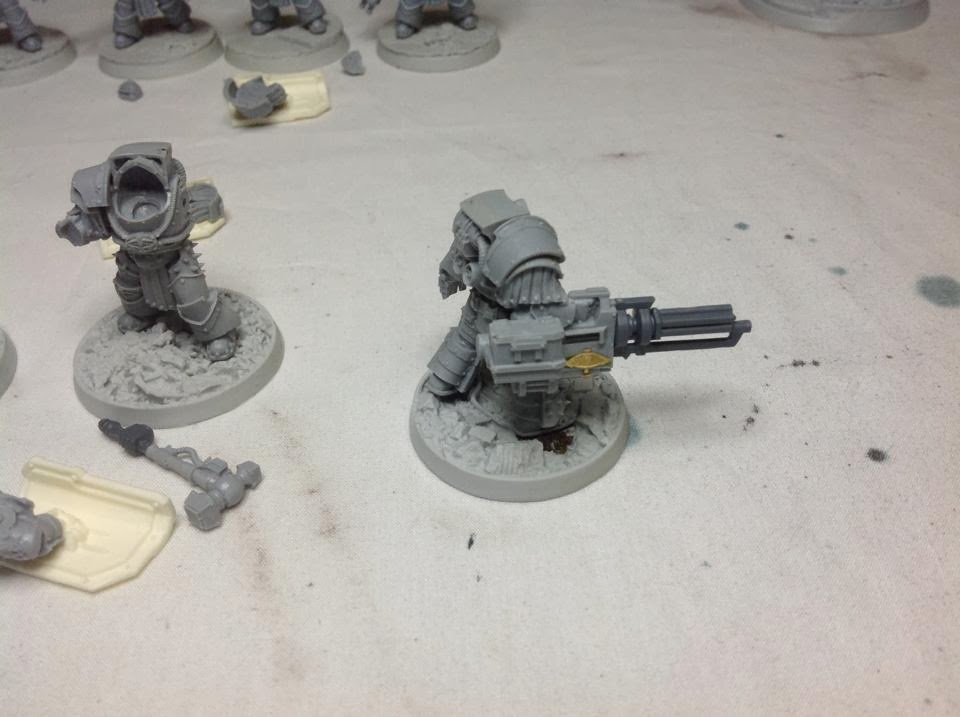 I made some assault cannons by cutting up some Wolf Guard ones and replacing the Autocannon barrels on the Heresy Reaper Autocannon. The bottom shell ejection port was green stuffed up and the Eye of Horus was then shaped and glued on.﻿ 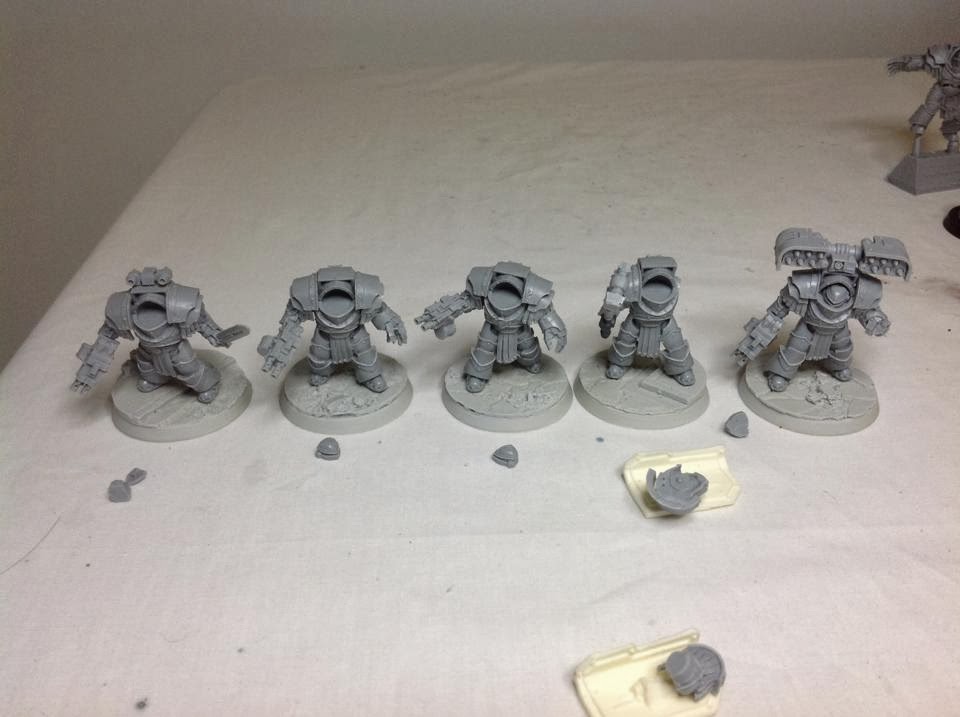 The first lot of standard Cataphractii hot off the press. A contemptor Cyclone Missile Launcher was used for the heavy weapon - once again a 40k perk, but it too is magnetised with the magnet covered up with green stuff. The Combi-bolter arm was also magnetised to allow for different heavy weapon load outs. ﻿ 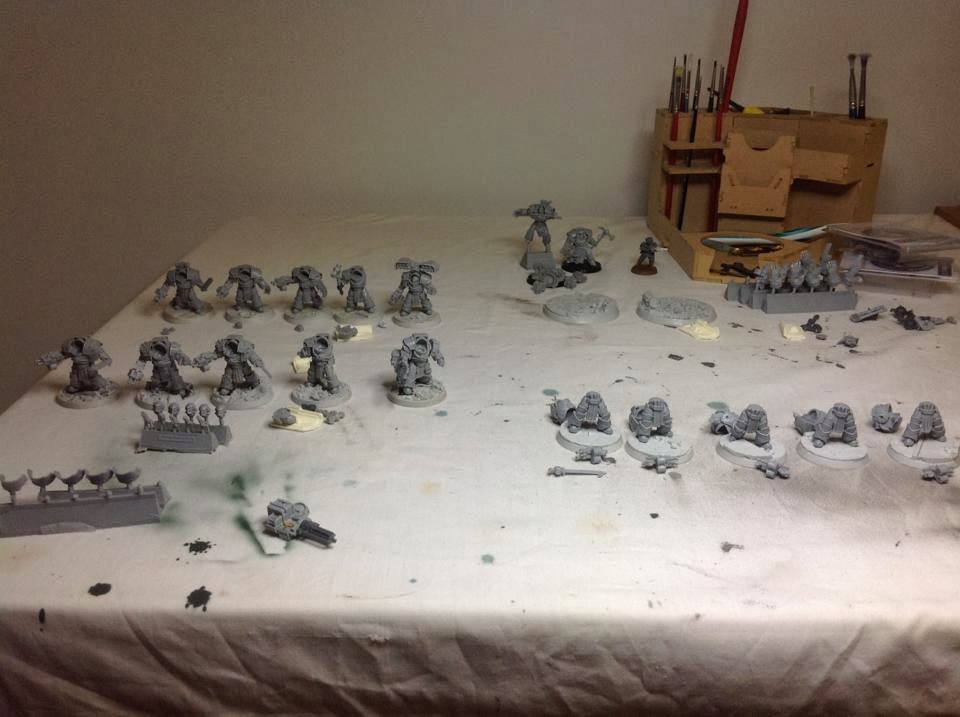 For each squad I knocked out I gave my work area a bit of a vacuum to counter the build up of resin. 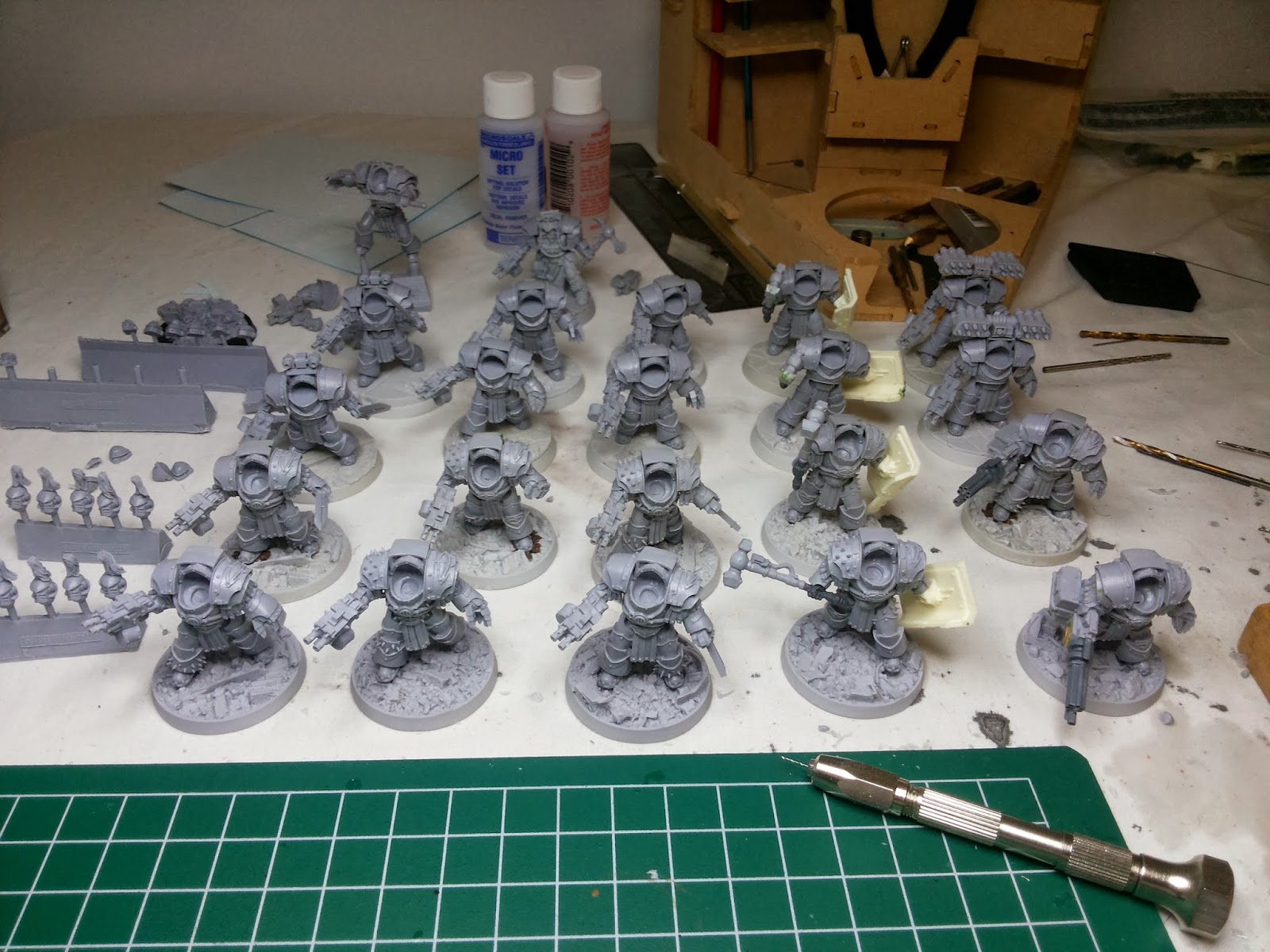 Done! A fully assembled Cataphractii Terminator army. They are all about to be given a bath. Cleaning is a very important stage of working with resin, in particular Forgeworld resin, as the mould release will prevent paint from sticking to the model's surface properly. The get rid of the mould release, each model needs to be scrubbed with a tooth brush in warm / hot soapy water. You don't want this too hot as it will bend the resin and bring undone all your hard work, but not warm enough and you will not get rid of the release agent properly. Once scrubbed, give them a thorough rinse then off to completely dry before painting. You can choose to do this before or after assembly, If I had my time again I probably would have left all the arms separate so painting would be easier - so lesson learnt I guess.

Another post or two and we will be up to real time with these fellas. Next post we play with paint schemes for the Justaerin and start base coating.