It's Macca here, with a slightly more in depth WIP, on my newest little edition, a Spartan Assault tank. So, with out any further commotion, lest get into it! The rear has very diluted hazard stripes. The reason is two-fold, wherever there is engine mesh, you don't want people slipping in, also, it looks bloody good! 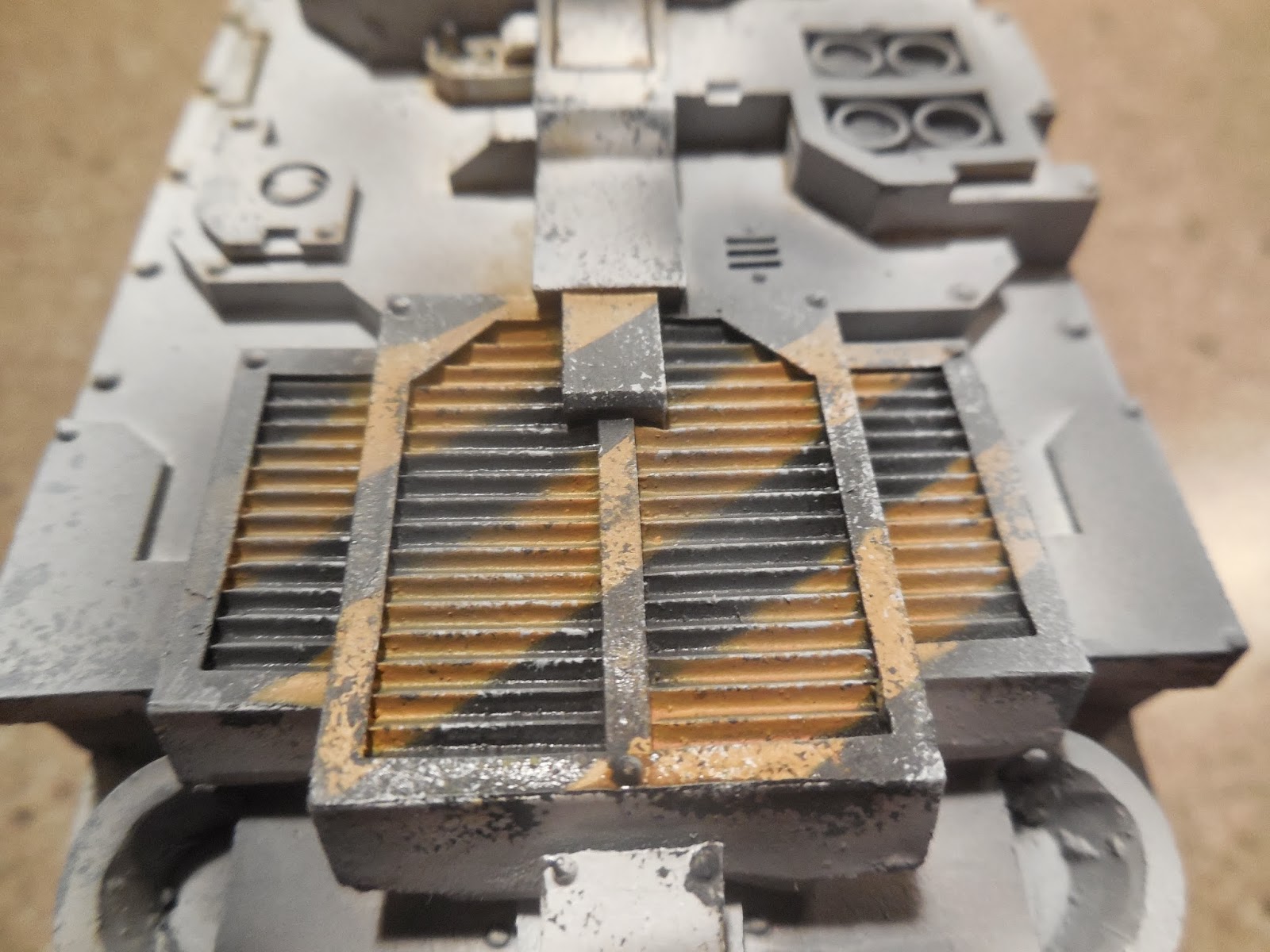 This is a full shot of the main hull, I have added Chaos Space Marine smoke launchers to either side of the hull, these are 'counts as' frag assault launchers. Frankly, I don't like the conversions people have been doing using the Land Raider Crusader ones, they strike me as too bulky, especially on White Scars who are all about speed. I have also added a small handle onto the top of the cupola and magnetised the top of the heavy bolter turret to allow the addition of a multi-melta (pic of that later.) 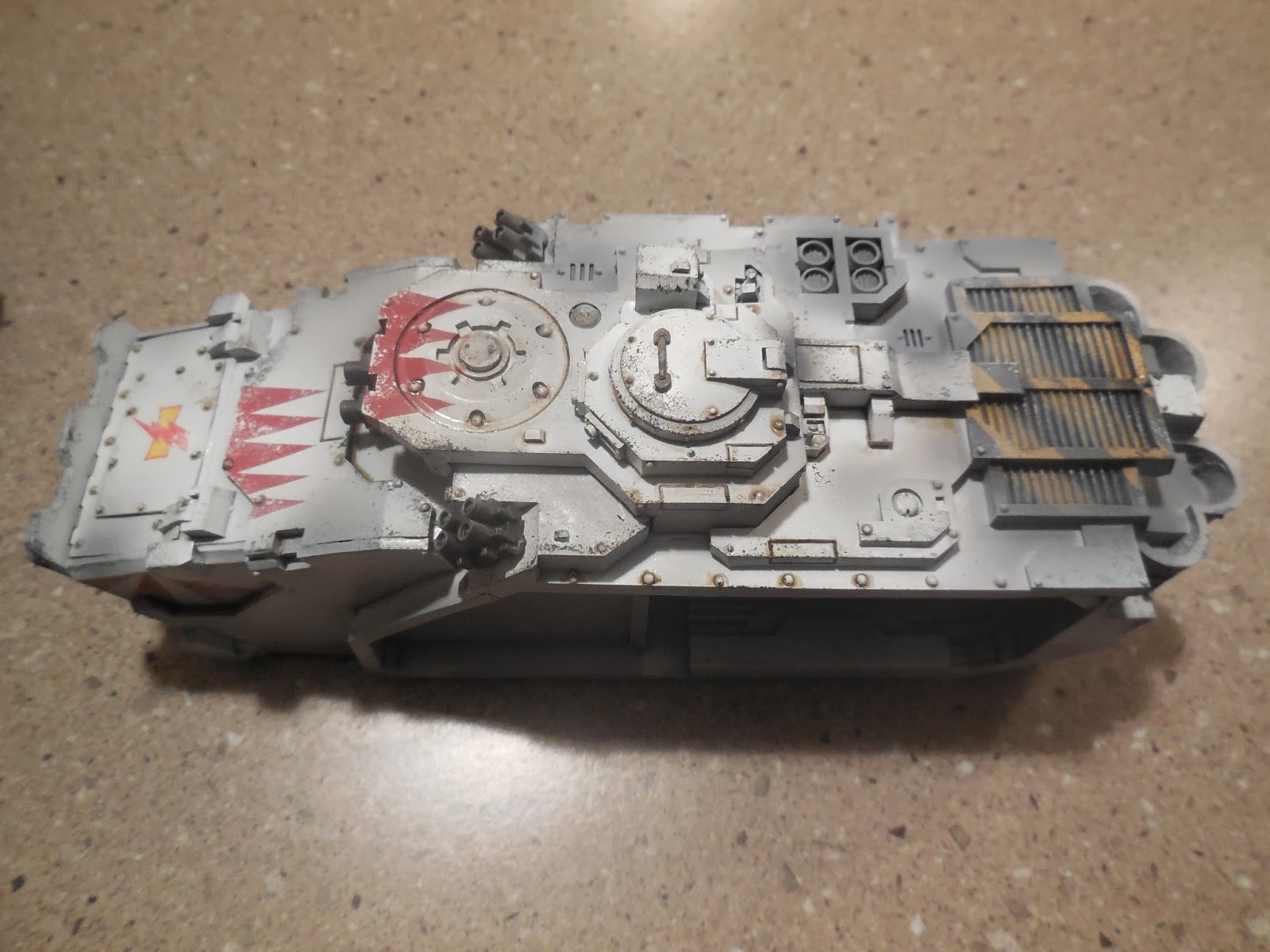 Here is the bolter turret and those launchers almost finished. The first stage oil wash has been applied to the recesses and bolt heads, with another one to go. The wash is a mix of brown, green and black, in order to give the bolts a suitably greasy look. The stripes on the hull and track sides are painted using templates I cut using a scalpel and Tamiya brand masking tape. I cut a series are triangles, then taped the cut outs to the hull. I then lightly airbrushed multiple layers of red softly onto the hull to avoid colour bleed under the tape. Once dried, I removed the tape, and lightly varnished over the top to prevent the red from being wiped off by my clumsy hands. I then lightly sponged and brushed white onto the red to make it appear as if it has been chipped away. The caution stripes on the rear were performed this same way, only changing out the colours. 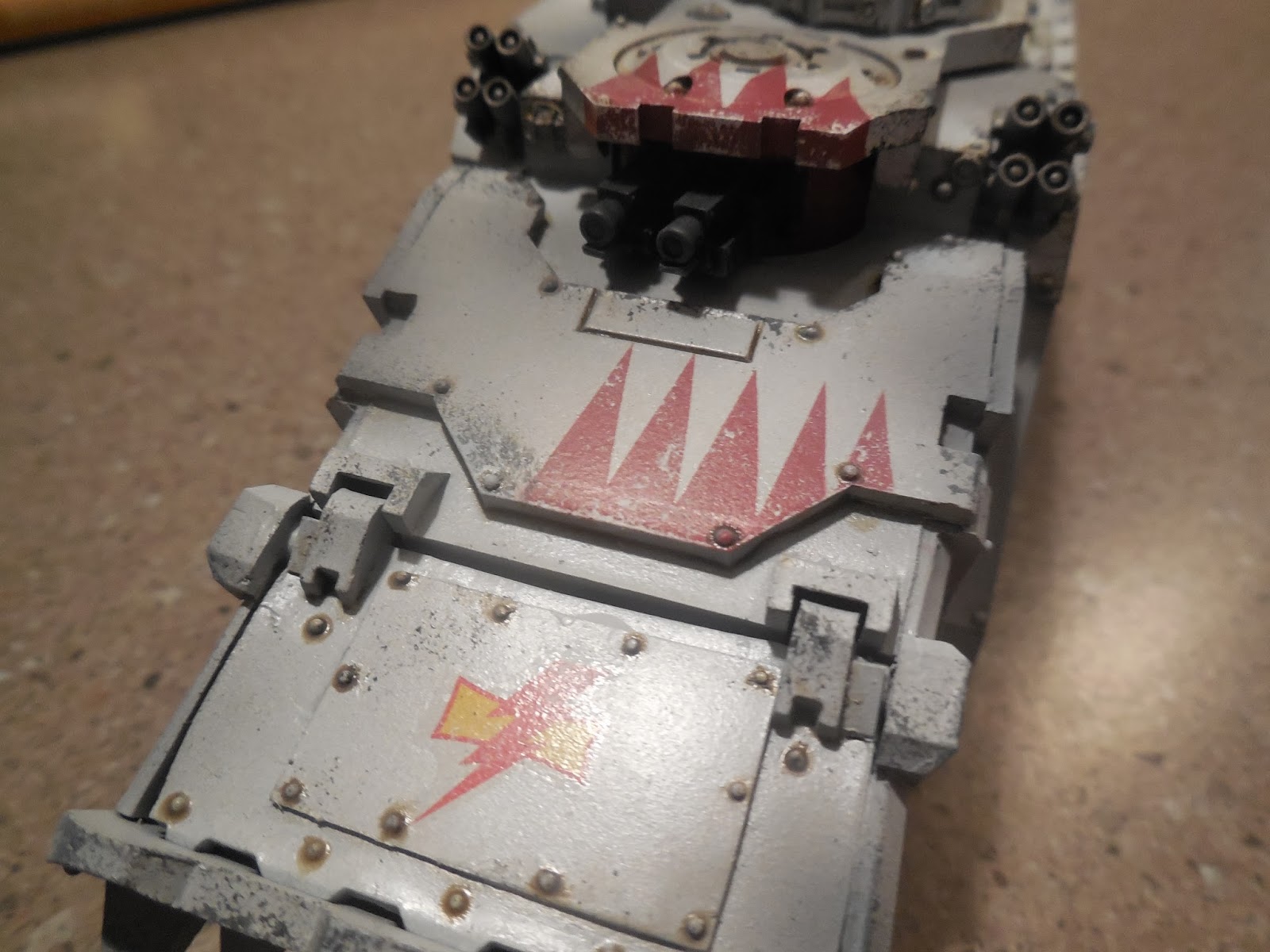 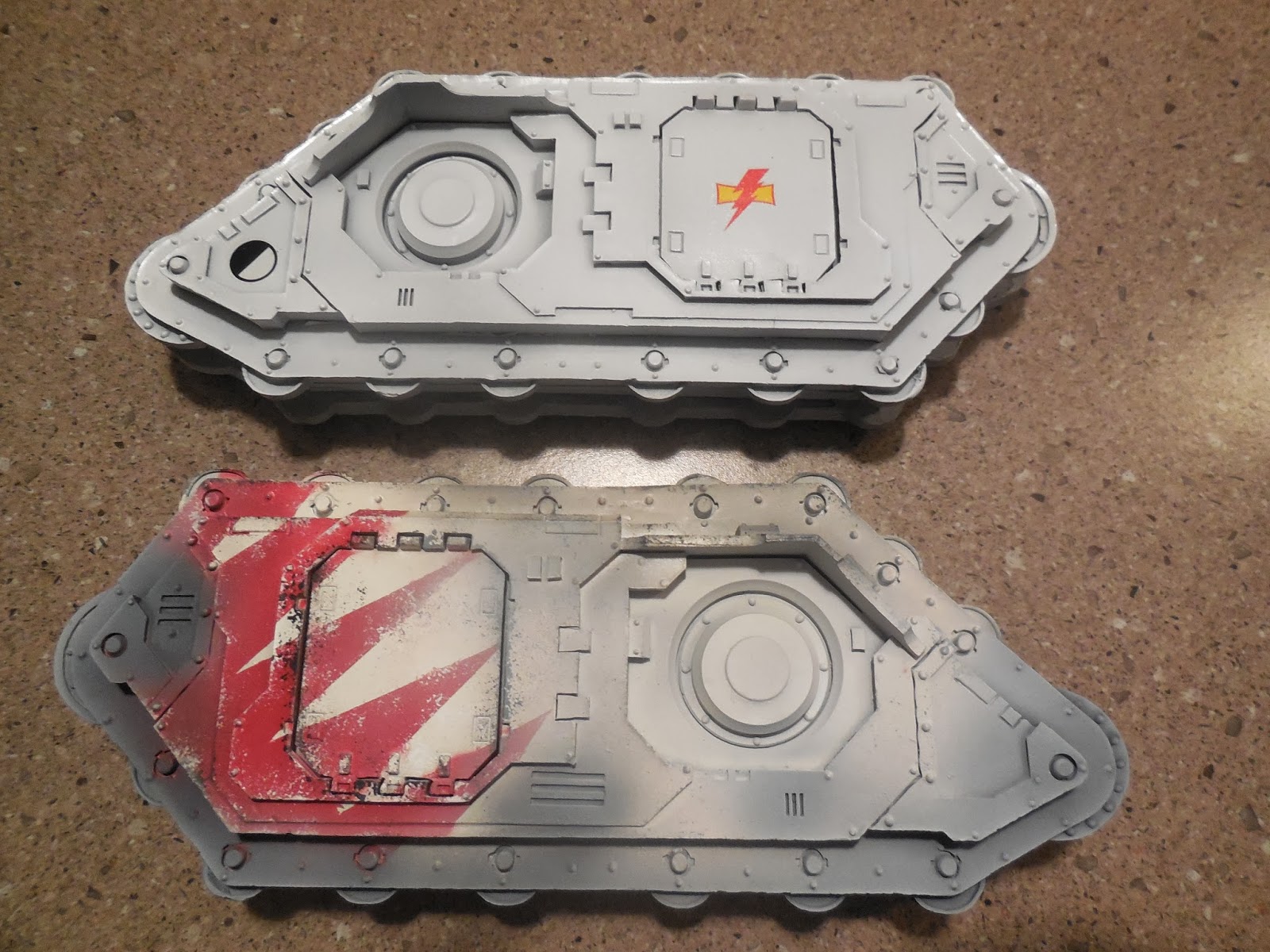 Here we have the sides, with before and after the addition of weathering and damage, the look I have aimed for is ah that is caking the sides, I have also used a slightly off-white to allow it to seem less clean. Also pictured is the multi-melta I converted up for the kit. You may notice that the red stripes are asymmetrical. This is because White Scars mark their vehicles in a very different way to most Legiones, as they are very individual warriors, who adorn their gear in tribal warpaint. 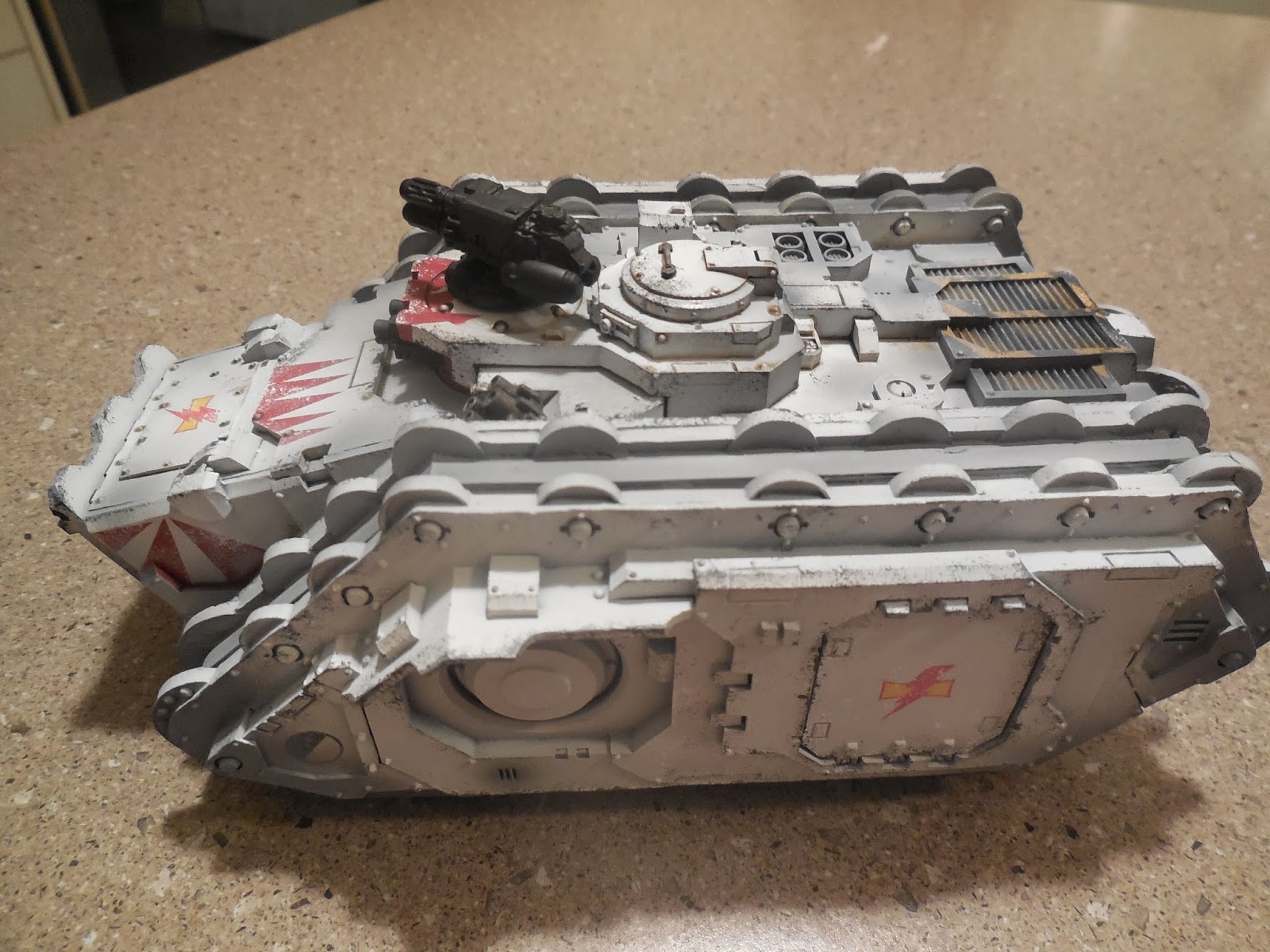 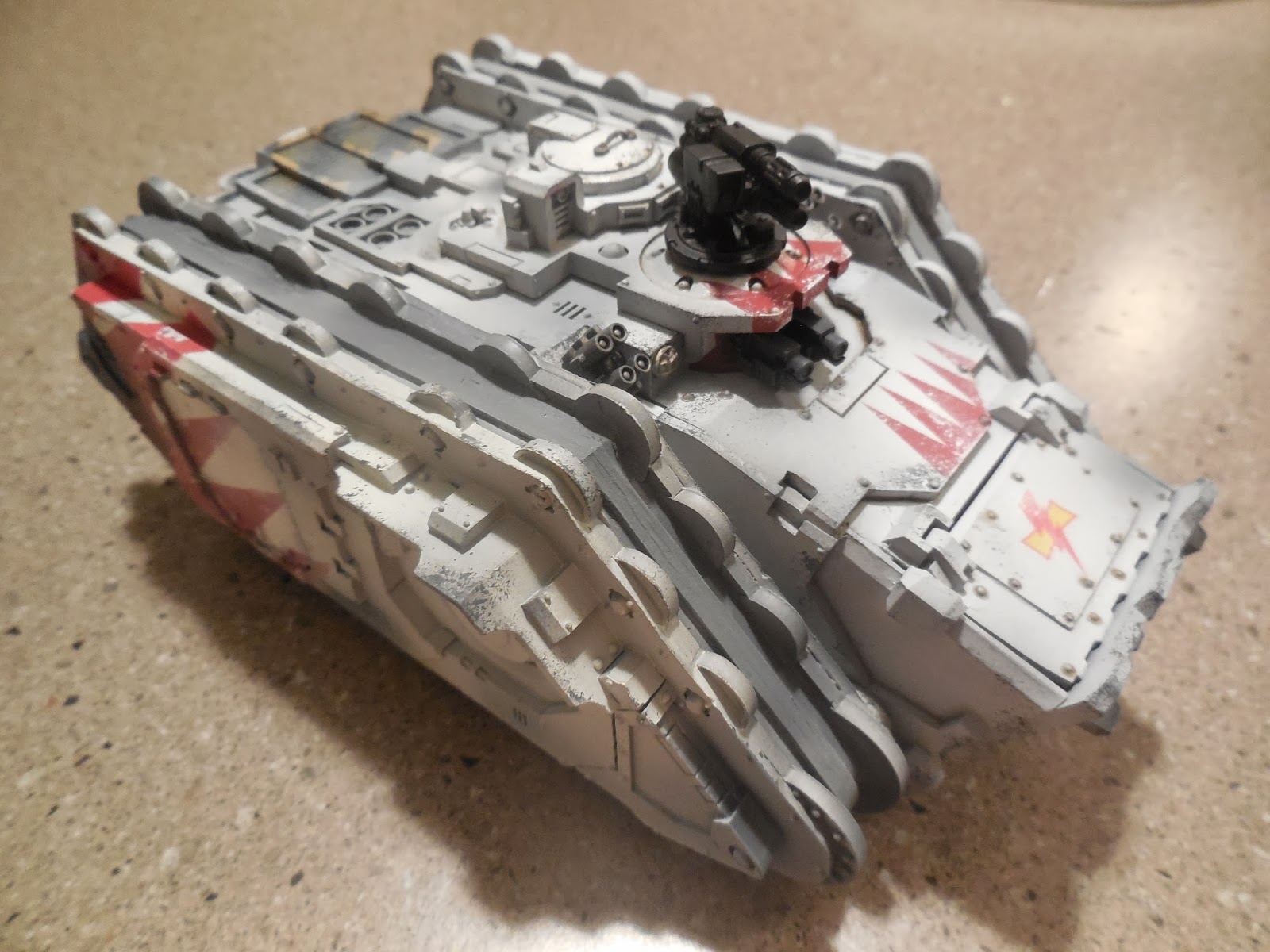 That's all for now, please come back soon for the finished shots!