What happened to Macca?

I had built a pre-heresy army which I was really happy with. I had picked up some painting awards, performed pretty well at a couple of events and this had made me cocky.

I decided as my next project that I would try a Book I: Betrayal army. Now, at this time(3 years ago-ish), I was probably a good painter, when it comes to Games Workshop super-highlighting and such, however I wanted to try using decals and realism. I was actually inspired by a mate John who runs The Painting Bunker and his wonderful 40k Carcharadons. For anyone who has seen this army in the flesh, it was actually something very different to what a lot of painters were doing at that time (he started the project early 2012, I believe), because he was using a LOT of decals, weathering, and a lot of heresy era armour.

Cue, the Death Guard. I tried everything on these guys, I tried decals, weathering powders, wet effects, tons of battle damage, all resin bases. I often met with mixed results, but I thought I had it nailed until I went to the Anzac Cup tournament in April 2013. I ran into John there, and he basically took me down a peg.

I am actually a very, very arrogant person. I always have been, I know it's a problem, and I am trying to deal with it. When I went to the Anzac Cup, I thought I had one of the best painted armies in the world. Yep, I actually thought this, because I had weathering, I had decals, I had all these 'pro' bits I had used throughout the army. But having these things doesn't make you good.

He quite correctly pointed out that I should have used oils in certain places instead of acrylics, I should also have tried different colours in several applications. Worst of all, my sponge-weathering was incorrect. I had applied the weathering all over, as well as concentrating it in all the wrong areas.

You see, among wargamers, there are two types of people asking for opinions:

-Those who want a real honest opinion.

-Those who just want you to praise them.

I can honestly say, I have been both at various points in time.  Of course, to break down this even further, those people who want a real honest opinion will fall into a further two categories:

-Those who will take it on board.

-Those who are know you're right, but will keep doing what they are doing.

Now, I have definitely been every one of these four options.

I contacted him about 6 months later whilst working on my new Raven Guard project. John actually said to me that he was shocked that I had listened. He didn't think I would take it on board. To be honest, I wasn't too sure, but I trusted in my fellow hobbyist. He had nothing to gain by leading my down the wrong path. This is something that I don't think enough people realise: People want to help you improve.

Ok, so, I know that I was wrong. I knew I had to improve. So, I did. What happened when I tried to do the same thing?

"You're an asshole, his work is great, you're just jealous"
"What's wrong with you? How can you put this down?"
"Mate, you're everything wrong with this hobby."

What did I do wrong?

Well, it seems that I am an asshole. I either picked the wrong crowd, or the wrong words. When I look on Facebook, BOLS, Wargamer, Cool Mini or any of a host of different sites, I see:

Harsh? Of course it's harsh. But it's the truth. As a group, we hate to say this, but there is a lot of absolute shit out there. We see it in blurry battle reports that look like they were filmed by someone with epilepsy at a Pink Floyd concert. We see it when someone posts up modesl with zero detail thanks to just terrible painting, and they are saying they'll do commission work! Is "that's shit" what I say to these people when I am giving criticism? Well, maybe to my mate Wadey, but really, no. Instead, I will say:

"I know what you're trying to achieve, but if I may make a suggestion, I would try thinning your paints more, you'll get a far better result."

Much nicer then 'Shit".

To everyone out there, when someone says "What do you think" or "C's and C's welcome", this is how you should respond, if you choose to respond, with a well thought out simple solution. Saying "Awesome work bro" isn't helping them improve as a hobbyist. Neither is defending them, unless an obvious troll is just picking on the painter.

Don't hate because something is different

Something I have often done, I actually get annoyed when people actively break with the established traditions. They paint pink Ultramarines, or call a Chapter a Legion. Whatever. I am a very judgmental hobbyist. This is also a bad attitude that I have slowly been trying to drop. If someone wants to do something different, don't hate on them, judge it on the quality itself.

I actually once made a tongue-in-cheek flow chart, to do with a group of gamers who were constantly asking super simple questions rather then looking in the Basic Rulebook. Now, before I get kicked off another page, the whole intent was that people should look in the BRB before going straight to a forum, that way they learn how to find things, and if they are struggling, then they could still ask for help. Here it is in all its glory. See anything offensive? 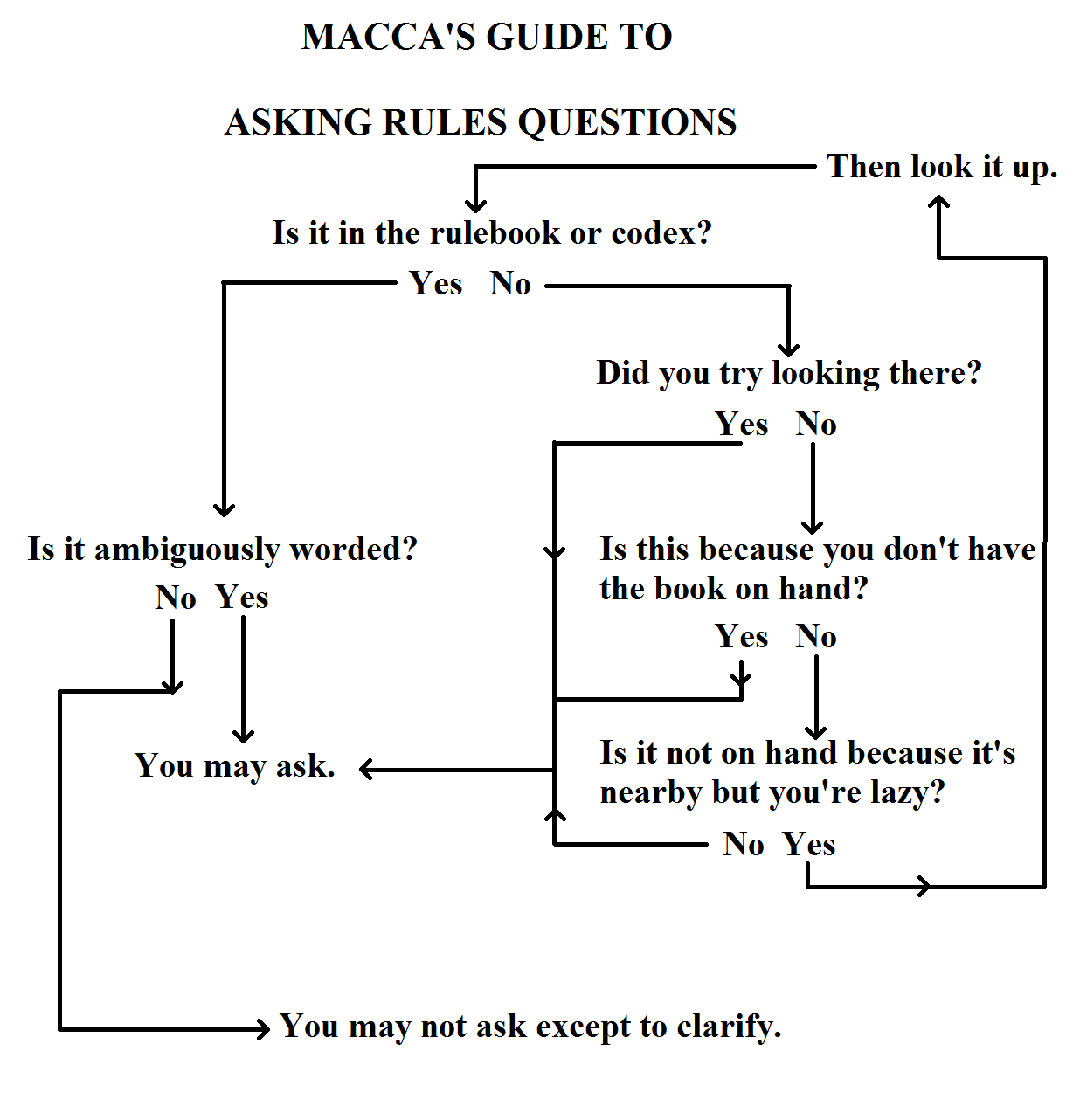 This got me kicked off a certain Facebook page, along with several people who came to my defence pointing out the joke and the actual merit. Some people felt that I was actively putting people down, despite all the 'positive reinforcement' I actually try to give. The perception was that I was hating on people for asking questions, although it couldn't be further from the truth. I was actually trying to encourage other gamers to do some detective work, but it backfired mightily.

People who receive criticism will react in a number of ways. The best of hobbyists will act on it enthusiastically or justify their choices. I try to be both of these these days. The worst of hobbyists will be down right defensive, and you can expect all manner of response from them.

At the end of the day, it is up to the gamer to respond to any criticism they receive, however they deem fit. We don't always need to give an opinion, and we don't need to feel personally insulted when we receive a poor response or hear an answer we just don't like. Instead we have to take on board what we are told, and we have to learn from our mistakes rather then repeating them. If someone says "this method will really improve what you have" don't just ignore it, pick up a model, test it out. They could be right. If someone tells you "I'm sorry, but it just isn't it, this is crap", don't defend it, understand why they said it, you might learn something. Ask them why it's crap, ask how you can improve. If I had ignored John when I started my Raven Guard, you'd see a much worse army for it.

I'm Macca, and I'm still learning. I still get criticism. I still get angry sometimes. One day, I will be the 'perfect hobbyist', that is, the one who knows just with a look, exactly what to do with any job, and who knows how to take on board ideas. I'm not there, but I'm trying.