Macca on Tactica: Different Armour MK's and Their Uses

I thought I would take a break from all the negativity of late to talk about something different. There is often a subject that comes up, and that is about what MK's of Power Armour an army should use. The answer of course, is whatever you feel you like most, but, if you want a more in-depth view, well, I will give you one. 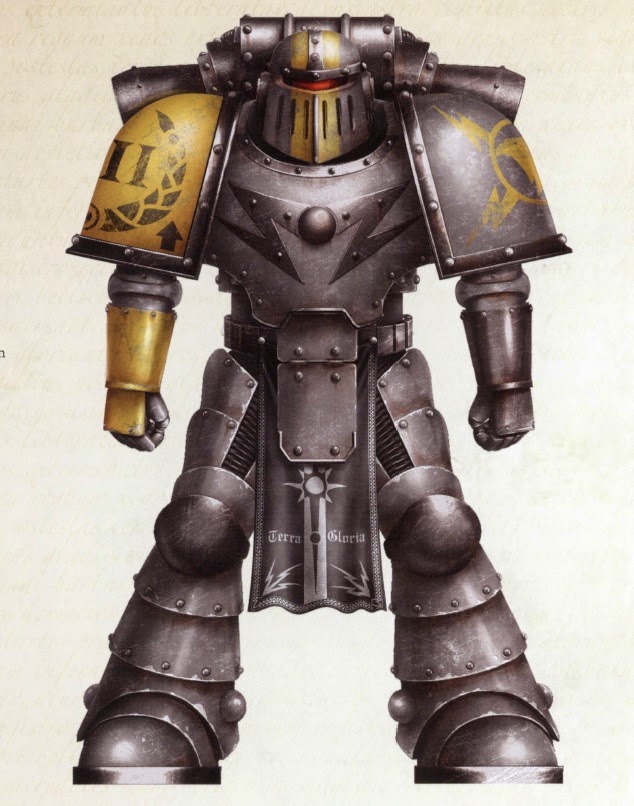 This is the armour that the Legions wore most. Mark II Power Armour was developed towards the end of the Age of Strife and was used during the dawn of the Imperium by the Space Marines. This armour type was the one in majority use right up until near the end of the Great Crusade.

The majority of Legions actually used this armour as their mainstay throughout the Great Crusade, so any force set around the time of the Ullanor campaign or prior would have had the majority of their troops armoured this way, with a few exceptions.

-your force is pre-Primarch
-your force is predominantly a high attrition force (that is, suffers mass casualties) as this armour was the easiest to replace due to being so common
-your force is a higher speed force which favours lighter armour
-you are using loyalists (as Horus tried to get the Maximus MK IV armour given to Legions allied to him as a priority) 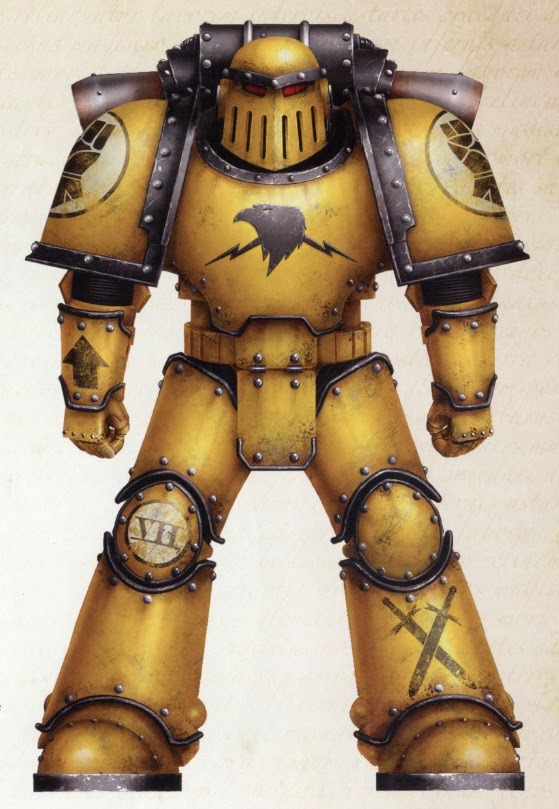 This armour was developed as a heavy assault armour. It is actually just MK II with extra plates attached to the front of it, and this is clearly visible when you view a miniature from behind.

MK III was best suited for spacecraft boarding actions and combat in confined subterranean tunnel complexes with little cover. This armour was ideally used by Space Marines when cover was minimal and combat was a matter of a simple frontal assault. Because of this pattern of Power Armour's great strength, it became known as the "Iron Armour".

-your force is pre-Primarch
-your force is predominantly a high attrition force (that is, suffers mass casualties) as this armour was the easiest to replace due to being so common
-your force is a frontal assault force which prefers heavy armour
-you are using boarding and Zone Mortalis tactics 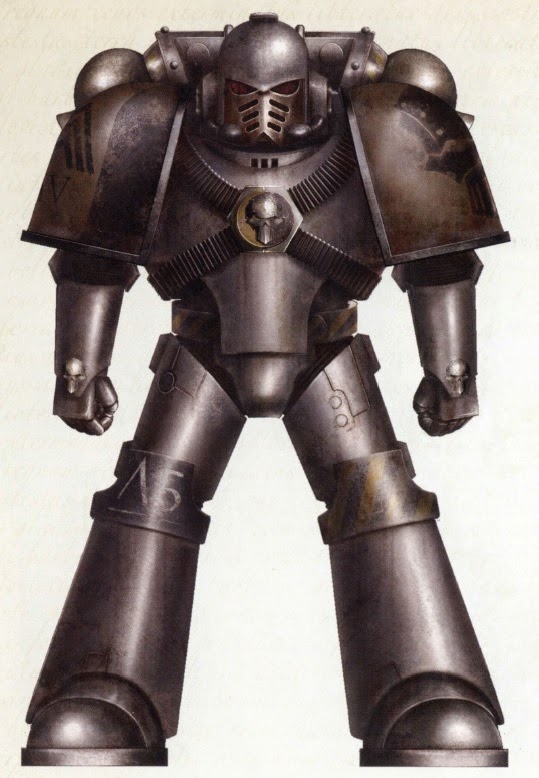 Maximus. Supposed to be the pinnacle of armour design, able to offer the best protection in a variety of conditions. Many of the Space Marine Legions were entirely or partially re-equipped with it by the start of the Horus Heresy.

The armour is best suited to the same roles as MK II, but is designed for use late in the Crusade, so it is of little use to people fielding early crusade armies.

Ok, there is no picture for this one. MK V is a stopgap designation or term, used to cover all mish-mashes of armour combinations and home jobs built during the Heresy by both sides. Unlike the actual Forge World models, it is not of a standardized design, and would most likely have been regular MK II, III and IV armour with parts home made or taken from other MK's added to them. 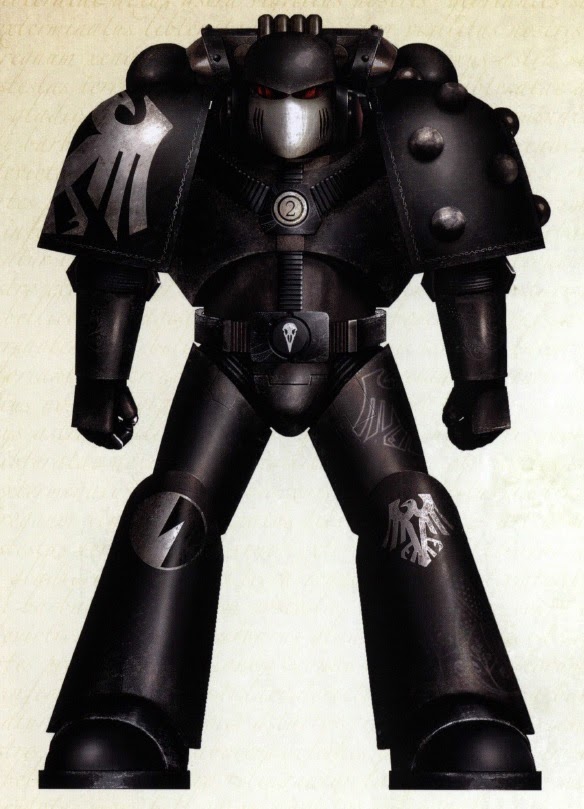 The finalised pattern of the Mark VI armour was named Corvus Armour in honour of the Raven Guard Legion's Primarch Corvus Corax. It looked little different from the Mark IV armour which most of the Legions already wore, with the obvious exception that the left shoulder plate was bolt-reinforced and the helmet design is the classic beaky.

This new mark of armour was Artificer-made and the first sets were shipped to the Raven Guard Legion ahead of all the other Loyalist Legions during the Horus Heresy, in recognition of not only their role in the technology's development process, but of the valiant sacrifice made by the XIX Legion during the Drop Site Massacre of Istvaan V, and their resolute determination to rebuild their shattered Legion to rejoin the fight against Horus. The prototype plans seem to have been acquired by the Alpha Legion, and they seem to be sporting similar armour, as well as captured examples from the drop-site being taken in very small quantities, most likely by Sons of Horus marines.

In the Heresy, we use two main types: 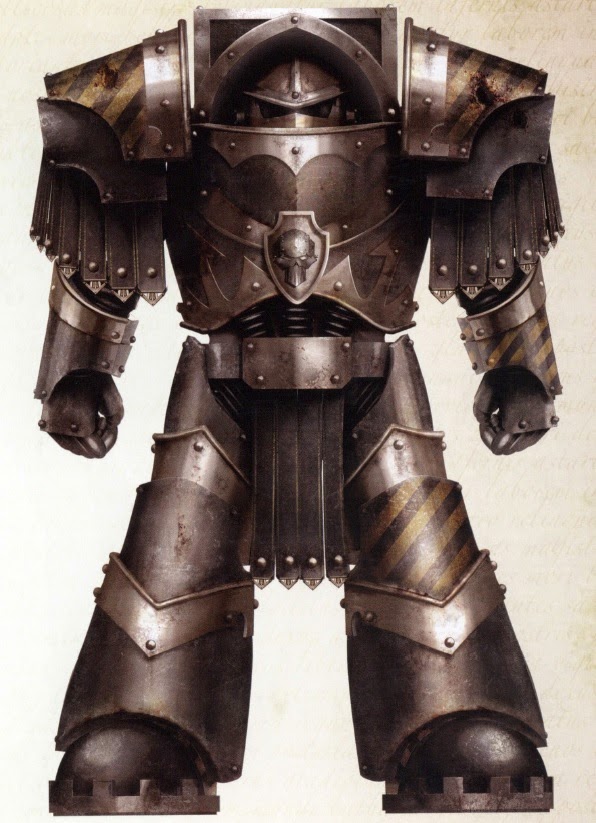 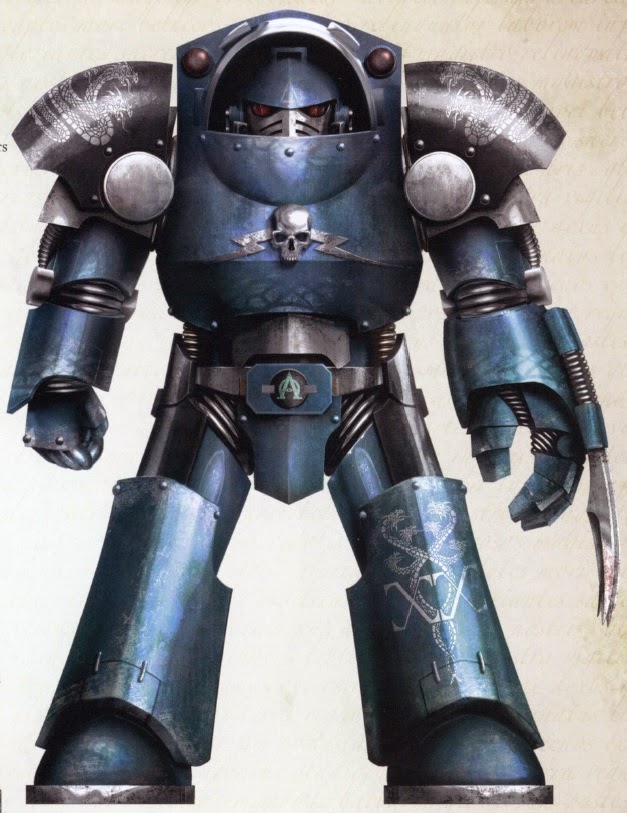 These two armours serve two different functions. Cataphractii is the real heavy hitter, similar in function to MK III power armour, and you can even see it in the layout. Tartaros on the other hand is more like MK IV power armour, an all-rounder version.

All the Legions utilised both types, in varying numbers, but it's up to you as the player to pick which one suits your army more. If you are using Imperial Fists with lots of Breachers, Cataphractii might be the go. If you are using Raven Guard, the more subdued Tartaros might suit you better.

I hope this quick little guide on power armour is helpful to you, I know that in the end, we all have a theme in mind for our armies, so at least this will give you the basics you need when picking what you are going to use. If you liked this article, let me know, also, if you have any ideas on other articles you would like to read or information you would like to know, post it in the comments.

I would also like to give a big thanks to Forge World on their lovely artwork, which I have featured here. As it is hard to come by really high quality images, I have borrowed these ones for the purposes of this article. Until next time,