Picking a Legion... it's messed up hard!

Picking a Legion. This is the toughest choice for the Horus Heresy gamer. We are spoilt for choice, and we know it. Already I discussed the armour options here, but this only comes into play after picking your army. All of these forces are very different to one another, and they all represent different goals which we have at the time of building them. This isn't the definitive guide, nothing I do in fact is anything more then a cursory guide, designed by myself and those around me to simply help other hobbyists. All I can hope is that you find what I write of some use.

Sorry in advance, there is only one picture today chaps.

Let's start with a little back story.

Before the Horus Heresy, I started with a Thousand Sons force, built using MK II armour, (not Legion armour, as this was pre-Book I from Forge World) with a few custom bits I acquired which helped to give them the Egyptian look. I actually searched sites all around the world here, getting parts from Russia, Poland, England, Australia, America and of course, unspecified places like eBay. This was an army of love, I had been a fan of the Thousand Sons since sometime in the mid 90's (at a guess), so I was happy to sink quite a bit of coin into them.

I built 30 sets of MK II with the squad leaders converted into Sorcerors, and with a home made Ahriman, a Forge World MK IIB Land Raider, several Rhinos and of course the centerpiece, Magnus the Red (converted from Scibor and GW parts, as well as some green stuff).

I converted and painted this painted Magnus before 6th edition dropped. When was that, 3 weeks ago? 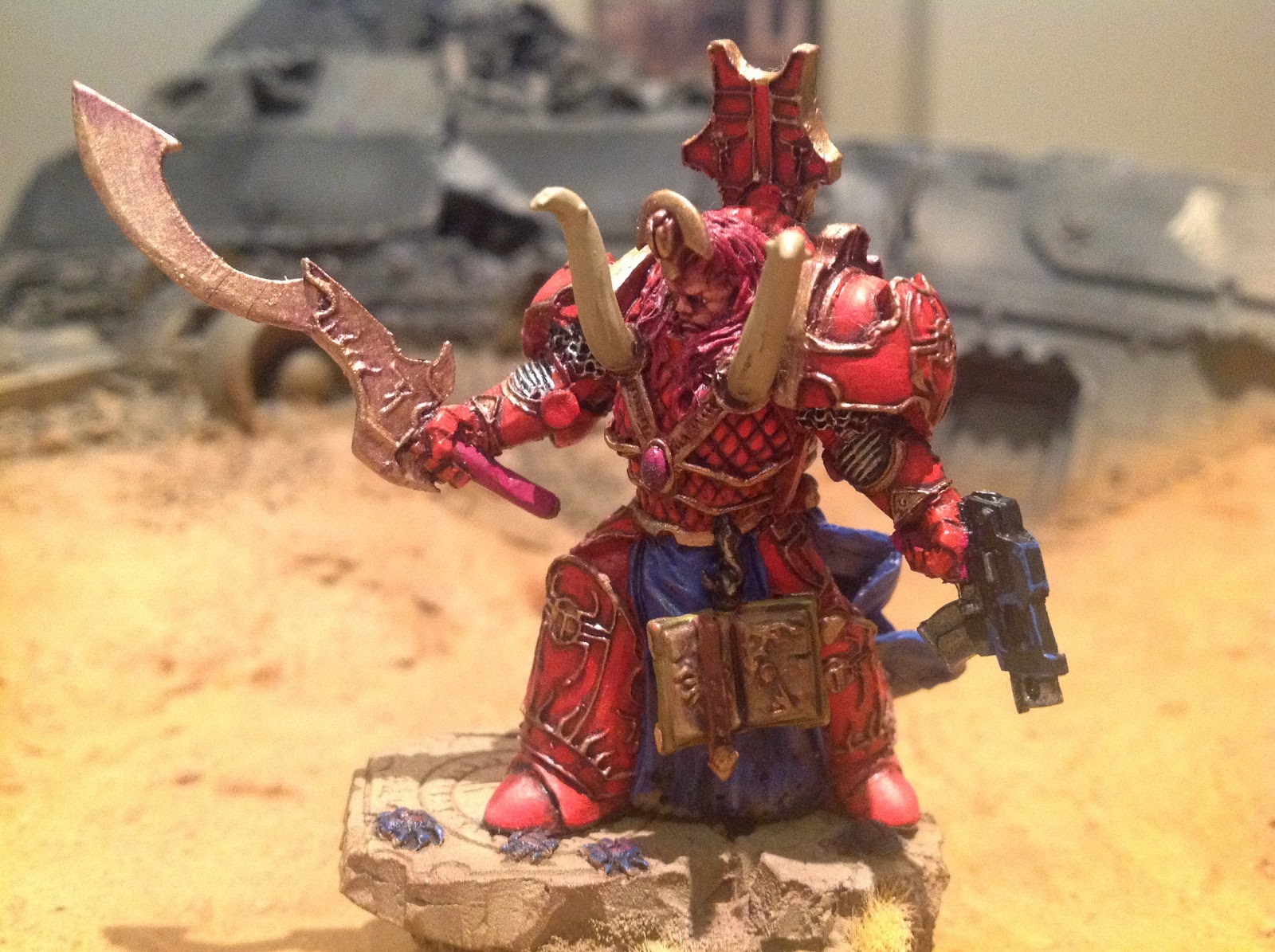 Unfortunately, within a month of completing the army, 6th edition landed, and a month after that, the Horus Heresy was announced by Forge World and they released Betrayal. All of a sudden, 3/4 of the army was redundant. Why? Well, sadly, none of my shoulders now worked, as FW was going to release new shoulder pads. Damn. Also, a lot of the Egyptian parts would also be done over by Forge World. Double damn. I now had an army, which, although fun to play and which was a labor of love, was now, well, superseded.

This now left me with a difficult choice: If Forge World are releasing the Legions, which one/s would I like to do, apart from the Thousand Sons? How does anyone approach a Legion? I know for some it's a simple choice, they have only ever done one force, and will only ever continue to do one force, but for the majority of us, it's a nightmare.

So now here comes the choice. What does one do? When picking a Legion, break it down to what style of warfare you like. Although you can play any Legion however you like, do remember that their Legion traits amplify their chosen tactics. For example, the Raven Guard get stealth and infiltrate on all models which have the Legionnes Astartes rule and which do not also have the Bulky rule. On jump and bike units, they gain furious charge. This means that whilst I could field a terminator heavy force, I really get no benefit from being Raven Guard. Lets look at each Legion and a few other forces in a VERY simplistic way, as this is the first part of picking an army:

Dark Angels: Swordsman, Knights, use of both bikes and terminators, a pretty balanced force, but more set towards close combat.

Blood Angels: True perfection, but not for perfection's sake. They are born this way. Combined arms with an emphasis on close combat.

Ultramarines: The perfection of combined arms. All units excel in their roles, no preference to any style of warfare, they adapt to suit the situation.

Death Guard: Stoic, slow to advance, but unstoppable once momentum is gained. The prefer chemical warfare and attrition tactics.

Thousand Sons: Psykers. They value knowledge and are adept at combining their powers with their units in order to amplify their combat effectiveness.

Sons of Horus: Combined arms, with a preference for close assault with specialist units. The warmasters' own.

Word Bearers: Religious zealots. Shamed by the Emperor, they sought new gods in the form of the warp entities. Use of daemons and a preference to combined arms.

Salamanders: Strong armour formations, use of flamer, melta and volkites as preferred items of wargear. Solid rocks of loyalty.

Alpha Legion: Distraction, confusion, infiltration. The Alpha Legion will sow discord within their enemies before striking with a range of weapon systems.

The Mechanicum: High firepower, high toughness, but slower, more ponderous and less coordinated and ambitious then the Legions.

The Custodes: Combined arms, every fighter is stronger then their Legion counterparts, fanatically loyal to the Emperor.

Sisters of Silence: Psychic pariahs. They diffuse psychic powers forcing enemies employing daemons and psykers to change their tactics, often for the worse. Force multiplier for other factions. Inferior to all other forces.

Imperial Army: Strong firebase, but lacks the staying power of the Legions. Excellent for throwing up walls of human shields and overwhelming through ranged tactics.

Disclaimer: I know that there are probably 50 fluff Nazis who want to jump on me for these descriptions, but I am just making a point here by labeling the most obvious traits of these armies. If you really have a problem with this, you're looking way too far into it.

Now, on top of their tactics, and their rules, what else draws a hobbyist in?

The paint schemes, that's a huge one. Many World Eater players got into them just because they are fricken' sexy. Yes, I said it, it's true tho, that blue-on-white looks amazing when done right. What about the Death Guard? battle damage, rust, burn damage, so many options here. Ultramarines, blue with white and gold accents is majestic when done right. Painting colours that we love really gives a hobbyist the warm tingly sensation. (Note that I say colours, not colors, as I am Australian and speak the Queen's English, Yankee scum haha.)

The HH novel series from Black Library, every HH player's nemesis. Who read Betrayer by that bastard A.D.B? (you write some brilliant stuff, one cannot help but be jealous of the way you can build a protagonist with little effort, and then thrust them into a complex story which keeps you up till 4am because you want to know more) You read that book, and you find yourself wanting to work on World Eaters. You'd even sell cocaine to fund the army. What about the Luna Wolves/Sons of Horus trilogy: who wanted to build Loken and a force of Luna Wolves loyalists fighting the last stand on Istvaan III? The novel series can be a huge motivation because it opens our mind and draws us into the universe of 30k unlike any other series. On top of this, sometimes we just want to paint a diorama based on a vivid image, such as a helmetless Guilliman punching Word Bearers into the sun on the outside of a battleship in space, or Magnus having his epic duel with Russ, Fulgrim's decapitation of Ferrus and many, many more.

These are all huge factors and they make it really hard to pick a force. I know several guys who are just stuck, they see multiple forces and their eyes light up. Then they realise that their Mrs. is holding a sawed off shotgun and is checking the bank balance looking for any reason to hunt them down and murder their 'beloved' hubby. (C'mon lads, most of us have been there, it doesn't have to be a wife)

I personally think that you just need to combine all three big factors. Pick a force who's tactics you like, that you like from the novels, and who's paint scheme you like.

I ended up deciding on the Death Guard, as I knew they were radically different to the Thousand Sons, in tactics and ideology, as well as the simple fact that they had most of their kits released. I also liked the paint scheme and the stories, such as Flight of the Eisenstein. So, I chose that force. Once I decided that I was done with the Death Guard, I had another choice. I decided (as book II was about to drop) to do a Loyalist army, especially as the majority of players were doing traitors, or loyalist factions of traitors. I chose the Raven Guard, as again, their ideology was VERY different to the Death Guard AND the Thousand Sons, I loved Deliverance Lost, and the Ravens Flight is like a kick ass 30k version of Dunkirk combined with the Vietcong, something that is very different to the 'standard' marine army.

At the end of the day, picking a Legion is hard. In an ideal world, we'd get to work on every Legion and be able to pick and choose from a huge variety of units at any time. Unfortunately, for most of us this just isn't the case, and we are lucky to really hit maybe half a dozen armies, to varying degrees.

I'd like to know your thoughts on this, how did you pick your Legion? How would you suggest people go about it? Why is Wadey such a jerk?